In ancient times, two Buddhist monasteries dominated the religious scenes in Anuradhapura, the Mahavihara and Abhayagiri.  Both monasteries were home to thousands of monks and represents the two competing sects of Theravāda Buddhism in Sri Lanka.  Their sectarian conflicts led to destruction of the Mahavihara, the main monastery of Theravada Buddhism built by the King Devanampiya Tissa.  Upon destroying the Mahavihara, King Mahasena (reigned 273-301AD) constructed the Jetavanaramaya Dagoba to house the relic of the Buddha’s belt.  Some also believed that the dagoba was built upon the place where Mahinda, the eldest son of Emperor Ashoka who first introduced Buddhism to Sri Lanka, lectured Buddhism.  Reaching a height of 400 feet, the original Jetavanaramaya Dagoba was the third tallest structure in the ancient world, behind the two Egyptian pyramids in Giza.  After Anuradhapura was abandoned in the 11th century, the stupa fell into ruins and subsequently renovated to its current height at 233 feet in the 12th century.  The stupa was gradually covered by shrubs until 1909, when conservation and clearing works began.

Once again we had to take off our shoes before entering the stupa platform.

It was hard to imagine the imposing prominence of the original 400 feet tall stupa. 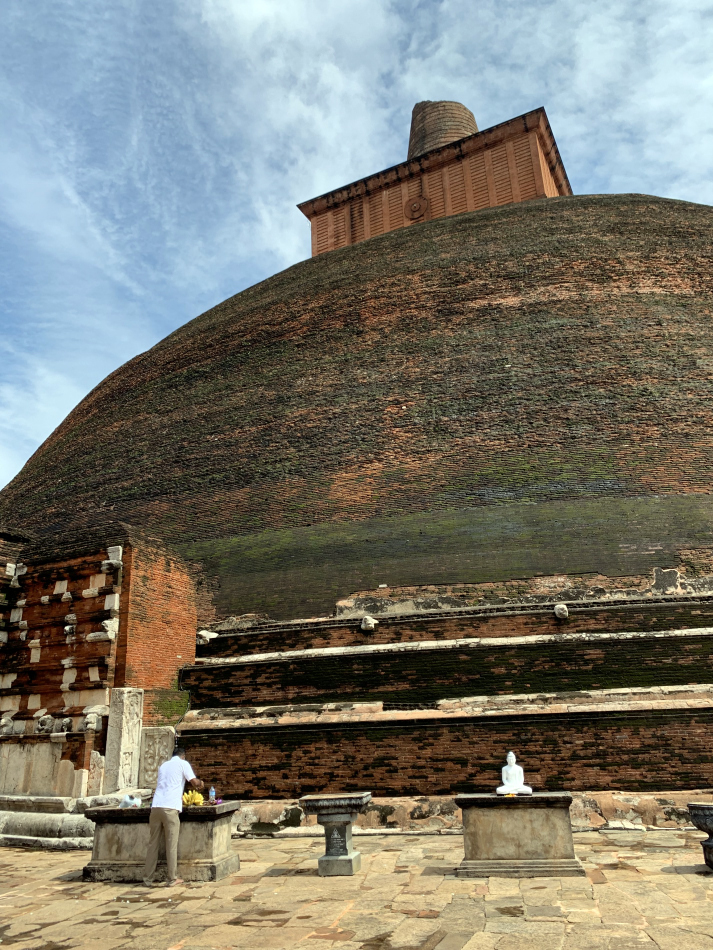 A handful of local worshipers put down their offerings on the stone pedestals in front of the stupa. 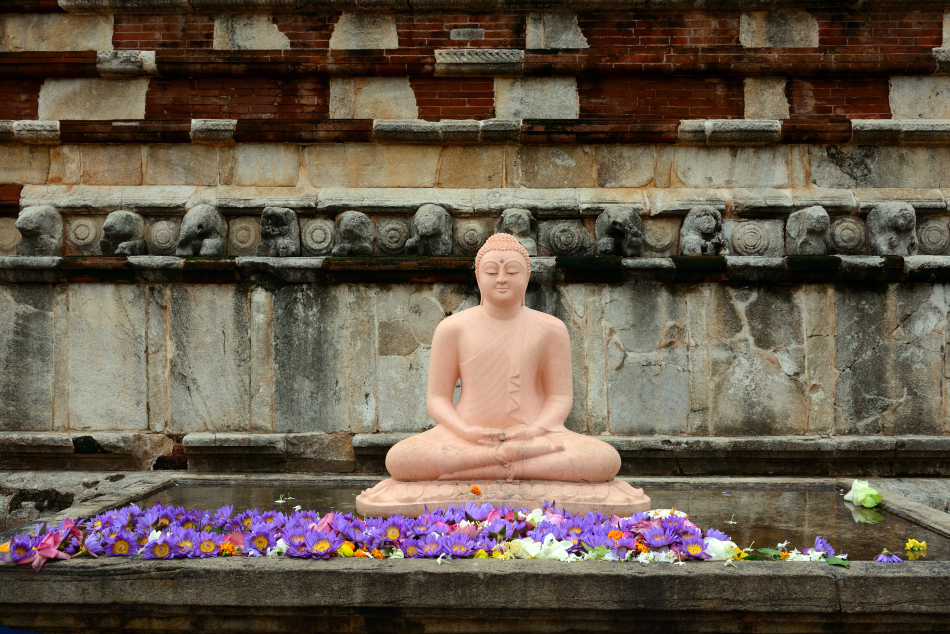 Beautiful statues of Buddha made of pink stone stood out prominently against the stupa wall.

Another Buddha statue is made with translucent white stone.

Pieces of fine statues and relief carvings were placed in front of the brick stupa walls.

At one side of the stupa stands a small worship hall. 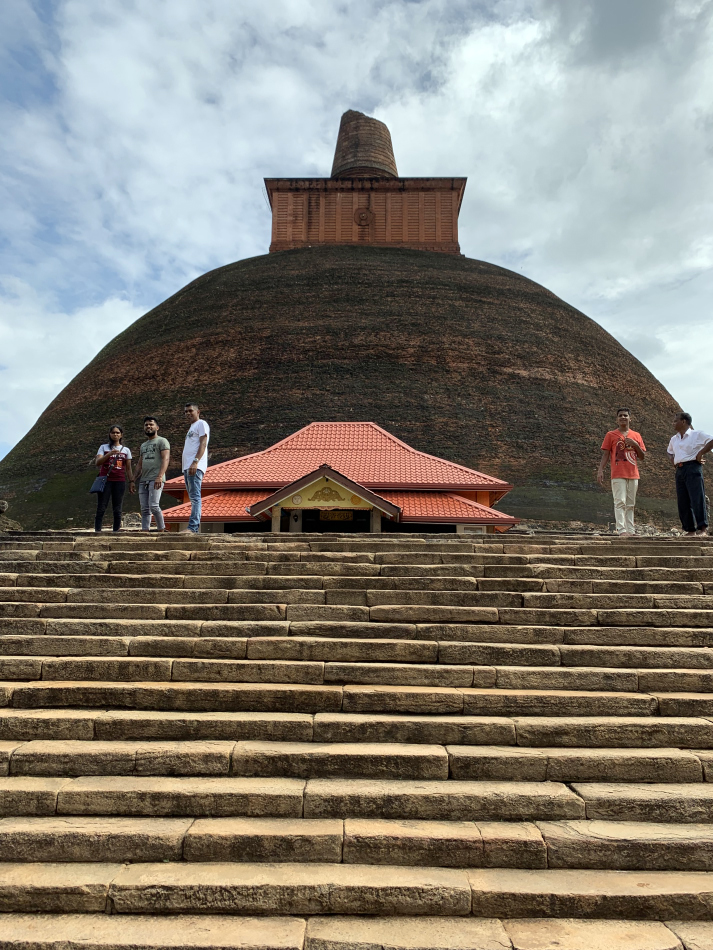 The Jetavanaramaya was constructed with special bricks made with 60% fine sand and 35% clay.

In early 20th century, Jetavanaramaya was covered with dense shrubs.

We left Jetavanaramaya after walking a full circle around the monument. 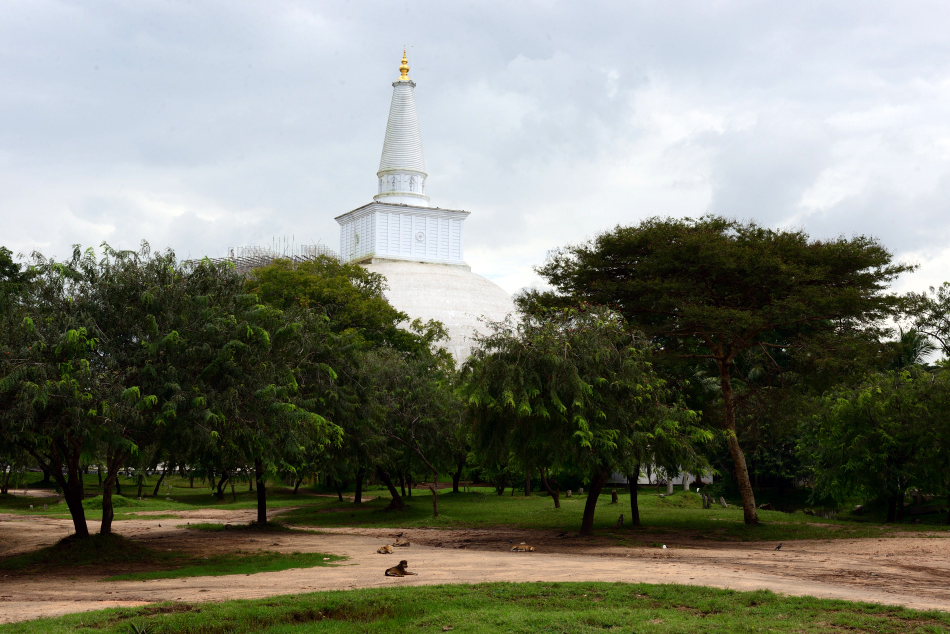 No tuk tuk could be found at the entrance of Jetavanaramaya.  We decided to walk back to Ruwanwelisaya where we might be able to flag down a tuk tuk. 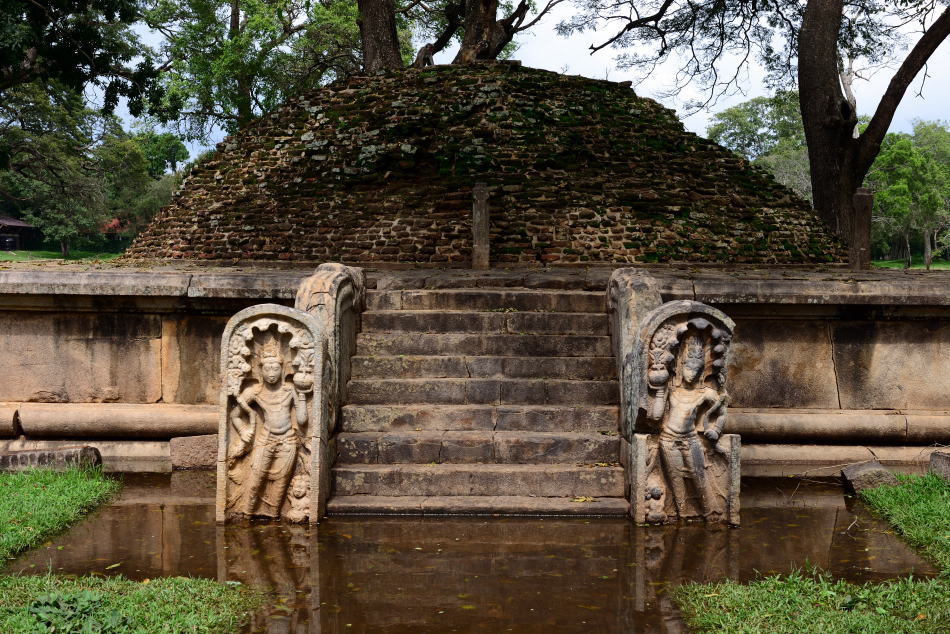 On our way, we walk by Silachetiya (Kujjatissa) Stupa, another 2000-year-old historical structure built in the era of King Saddhatissa (137 – 119 BC).

Near Ruwanwelisaya, we bumped into a group of tufted gray langur hanging around in the archaeological park.

From Ruwanwelisaya, we decided to walk back to The Sanctuary at Tissawewa via Basawakkulama Tank, where locals enjoyed picnic lunch by the water .