39 days had gone by. My Middle East journey had came to an end. Back in 2006, political situations in the region was relatively calm. No hiccups in transportation, no encounter of theft or any form of danger, no unwanted aggressive behavior from anyone we met, our trip went pretty smoothly from beginning to the end. I spent my last day in the Middle East wandering around Islamic Cairo, indulging myself one last time in the midst of historical streets, laid-back teashops and souvenir stalls. A collage of Islamic Cairo composes the last bits of my memory of the Middle East. After my walk in Cairo, I met up with my two travel buddies just returned from Luxor. We then hopped on a taxi to the airport for our flight to Athens.

BRIDE OF THE MEDITERRANEAN, Alexandria, Egypt

After an isolated retreat at Siwa Oasis, I once again headed back onto the road. This time, the destination was my home in Toronto. The journey from the Egypt’s Western Desert to Canada took me first to Alexandria and Cairo by land, and then Athens and Zurich by air before touching down on the North American soil. I took an 8-hour night bus leaving Siwa at 22:00, and arriving Alexandria in early morning the next day. I sat beside a friendly old lady who kept on offering me peanuts. After some snacks and chat, I felt asleep with my headphone music. When I get up, Alexandria was just minutes away.

Founded in 331 BC by Alexander the Great, Alexandria is the largest city by the Mediterranean and the second largest city in Egypt. In the Classical era, the city was well known for the Lighthouse of Alexandria, one of the Seven Wonders of the Ancient World, and its Great Library, the largest library in the Classical World with 400,000 scrolls. The city itself was once the largest city in the western world before overtaken by Rome. Alexandria remained as the capital of Egypt for a thousand years from Ptolemaic Egypt, throughout much of the Roman and Byzantine era until the Muslim conquest in 641 AD, when the political centre of Egypt was shifted to Cairo. By that time, the magnificent city that once rivaled Rome and Constantinople was already largely plundered and destroyed. In the modern age, Alexandria regained a part of its former glory as an important port of international trading, connecting Egypt and its products (such as Egyptian cotton) to the outside world. 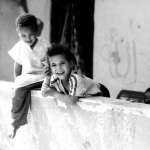 During my short stay at the oasis, the people left me with the most lasting impression were the Siwan children. No matter how hot during the day, I could still find these kids outside their homes having fun. I often stopped my bicycle and asked these kids for directions. Some would point me towards the right direction, while others might introduce me to their friends from next door or show me their self-made toys. Sometimes I would ask if I could take a photo of them, and just holding my camera towards them would make them laugh for a long long time. It was June 2006, when Siwa was still a relatively unknown travel destination except for backpackers, and the world was far less connected before the emergence of iPhone and Instagram. The kids belonged to a much simpler world back then. It is interesting to look back at their photos. For me, they represent some of the warmest memories of my Egyptian experience.

Cycling is a popular way to take in attractions that lie further afield from the oasis. Renting a bicycle was quite easy in the town centre. Under the scotching summer heat of around 45 degrees Celsius, riding the bike in Siwa means one has to get a drink every half an hour. That was exactly what I did. Without smartphone or a proper map, cycling by myself also forced me to interact with the locals to ask for directions. With a bike, I was able to venture out a little further away from the town centre to visit the Temple of the Oracle, the Holy Temple of Amun that Alexander the Great visited over two thousand years ago; Fatnas Island, a laid back and lush green area right by Lake Siwa and Gebel al Mawta, the Mountain of the Dead carved with many rock tombs.

Spending the night in the oasis town of Siwa was not as dramatic as sleeping under the Milky Way in the Great Sand Sea. Nonetheless, it was an exceptionally peaceful experience to stay the night in Siwa. In the evening, there wasn’t many people on the streets. Alcohol was almost non-existence. While most locals stay in their homes, some tourists would spend their evening smoking shisha or devouring a cup of coffee or tea at a tea house After a delicious couscous dinner, I wandered around the oasis town with my tripod and film camera to document the tranquil nightscape of the oasis. The Shali Fortress was always the focal point no matter where I went in the town centre. Under strong floodlights, the majestic ruins stood proudly above the the new town centre. Each of the eroding structure once contained generations of desert culture and forgotten memories of the ancient Berbers.

With an area of approximately 72,000 square metres stretching across western Egypt and eastern Libya, the sand dunes of the Great Sand Sea offer visitors an opportunity to experience a sandy Sahara. Sand seas only cover a minor part of the world’s largest hot desert. The majority of the Sahara is in fact rocky and barren. The remote Siwa Oasis is a popular base to explore the Egyptian side of the Great Sand Sea. Getting out to the vast sea of sand requires a 4×4 vehicle. Most tourists would join a local tour for either an overnight stay in the desert or a half day visit that ends with watching the sunset from the dunes. I opted for an overnight tour. After all, it was such a romantic concept to sleep under the Milky Way in the open Sahara. I shared the 4×4 desert tour with a young American couple. Our 4×4 spent sped out the oasis and spent much of the afternoon doing “roller-coaster” runs up and down the sand dunes. To enjoy the full excitement, the driver told us to sit on top of the 4×4.

After some chill out time on the dunes, we were dropped off at a campsite right by a small artificial pool. After a simple meal, we got to choose to either stay inside a simple stone shelter for the night, or spread out our provided rug and sheets nearby to claim an open spot on the sand. I slept a bit and woke up at around 2am. As soon as I opened my eyes, the imposing Milky Way was right over my head. Until my other stargazing experiences in the Atacama during my 2013 South American journey, the starry sky that night over the Great Sand Sea was probably the most beautiful that I have ever seen. 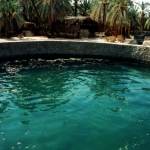 With a constant temperature of 29 degrees Celsius, the Ain Juba or Cleopatra’s Spring is a popular tourist attraction near Siwa Oasis. While some say Cleopatra swam in the pool during her visit to the oasis, many other historians dispute about this legend and insist that the spring has nothing to do with the famous Queen of Egypt. The spring is nonetheless ancient and well known in times of antiquity. Referred as the Fountain of the Sun by Herodotus, legend has it that Alexander the Great followed a group of birds in the desert and reached the famous spring during his conquest of Persia. From history to the present, the spring remains as a reliable treat of a cool refreshing dip for tired travellers.

Many tourists reach the pool as part of a local tour going out to the Great Sand Sea, it can also be reached by cycling on the road to the Temple of the Oracle. For me, I have done both, first as part of a local tour on the way to stay a night in the desert, and second time by bicycle on my way to the ruined temple. On my first time, I spent most of my time chatting with the friendly pool caretaker in the pool hut. I didn’t notice any bather during my two visits. Given the fact that swimmers were advised to bath with a t-shirt on in respect to local customs, I didn’t get into the famous water myself given I didn’t have an extra t-shirt with me on both occasions.