The King’s Highway of Jordan has been an important trade route from Egypt to the Euphrates River for thousands of years.  The route roughly runs along Jordan Rift Valley, from the source of Jordan River, passes through the Sea of Galilee, Dead Sea, Arabah Depression, Gulf of Aqaba and the Red Sea, in Jordan, Palestine and Israel.  The Jordan Rift Valley lies in the crossroad of the tectonic plates, including the Arabian Plate, Dead Sea Transform Fault, Sinai Microplate.  The dramatic valley landscape is formed by the geological movements of the tectonic plates, forming an interesting backdrop for the historical King’s Highway.  Today, tourists and pilgrims travel on the historical backbone of the country, the King’s Highway, from Mount Nebo and Madaba in the north,  passed by the Crusader castles of Karak and Shobak, and arrive at the magnificent Nabataean lost city of Petra.

From Karak, our hired taxi brought us to Shobak Castle, the second Crusader castles that we visited in Jordan.  In 1115, Baldwin I King of Jerusalem ordered the construction of Shobak Castle, establishing the oldest Crusader castle in the region.  Also known as Montreal, the Shobak Castle is not as big as Karak, but the ruins and the surrounding landscape is no less impressive.  We met few tourists (except a local family of six) in the castle, despite the admission was free of charge.  We wandered freely in the castle ruins.  Apart from the ruins, what truly impressed me the most was the surrounding landscape of the Jordan Rift Valley.

Castle Shobak is also known as Montreal, or Mont Royal.

Baldwin I King of Jerusalem built the Shobak Castle to control the caravan routes between Egypt and Syria. 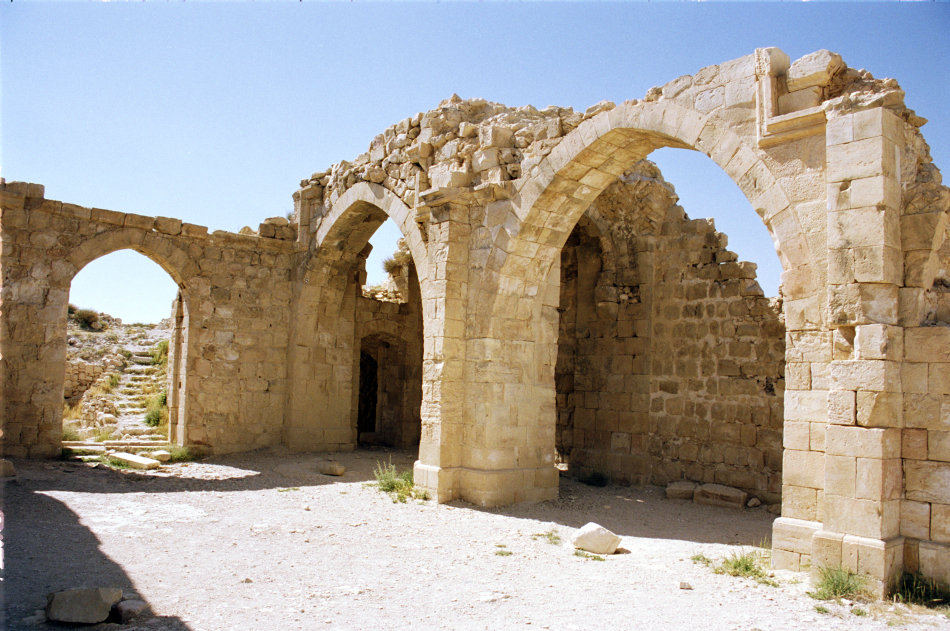 Tunnels were constructed in the castle to access two spring cisterns down the hill.

The tunnel access to water source allowed the castle to hold longer during a siege. 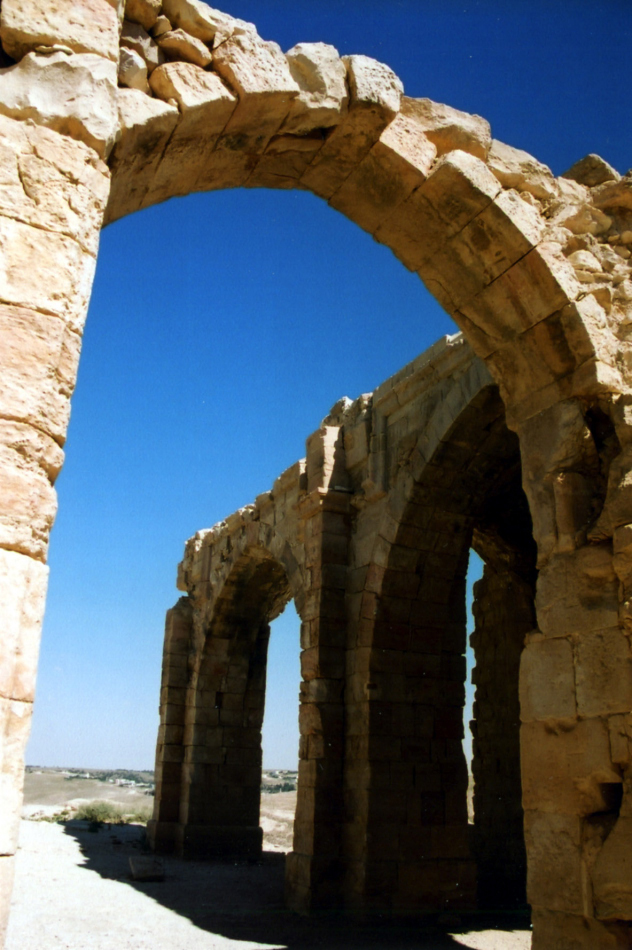 Yet, in May 1189, the castle fell to the army of Ayyubid sultan Saladin.

Probably for defensive uses, a number of stone balls are in display at the ruins. 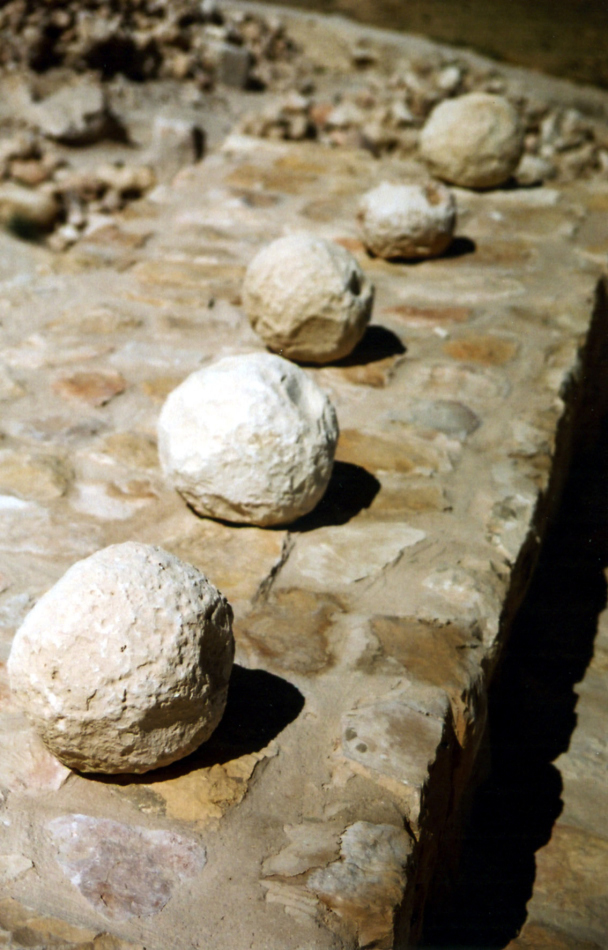 Some stone balls were placed on the defensive walls of the castle.

The stone balls looked interesting against the blue sky.

During our visit, we met a local family who waved to us and posed for our photo.

Despite mainly in ruins, visiting Shobak Castle was an impressive experience.

Ayyubid force controlled the castle for 70 years and embellished the complex with carved inscriptions. 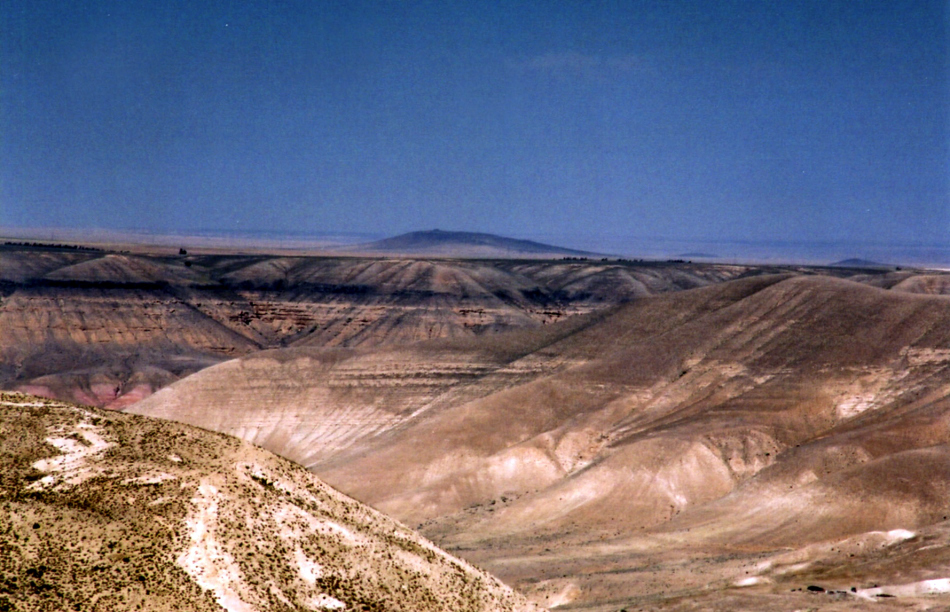 From the castle, we could get a decent view of the landscape of Jordan Rift Valley. 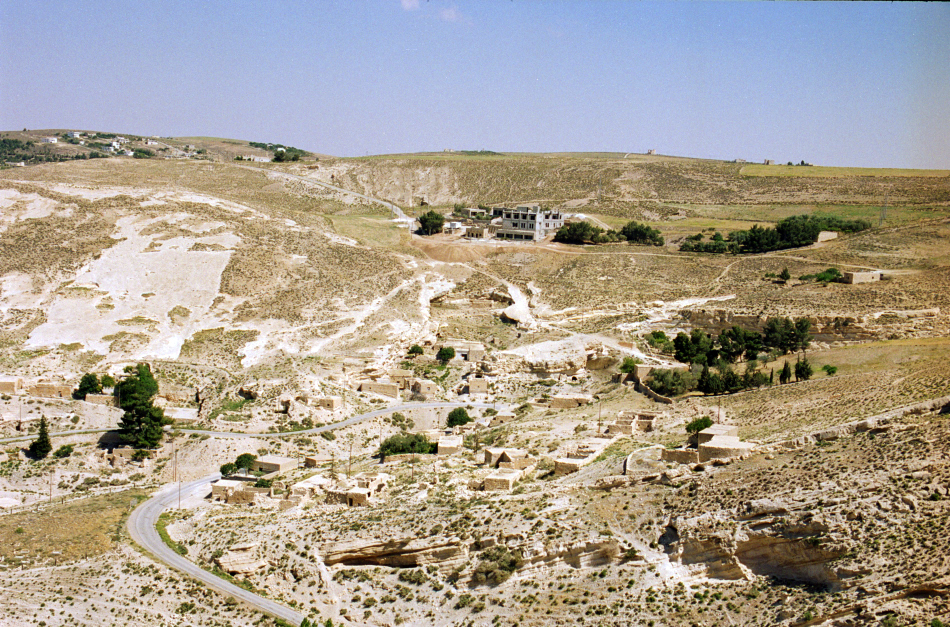 Down below, the landscape and ruined buildings blended into one coherent picture. 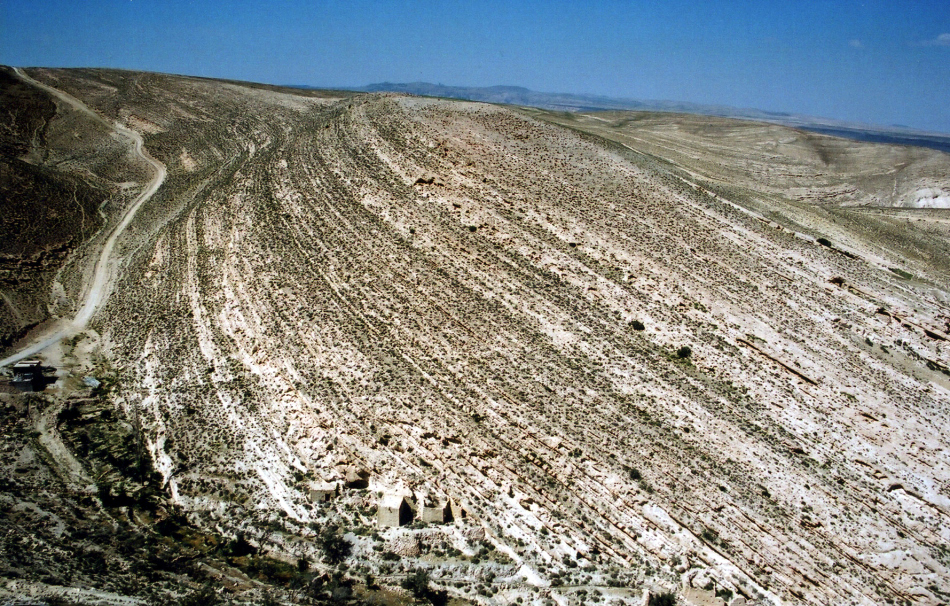 The pristine landscape surrounding the castle was a pleasant surprise. 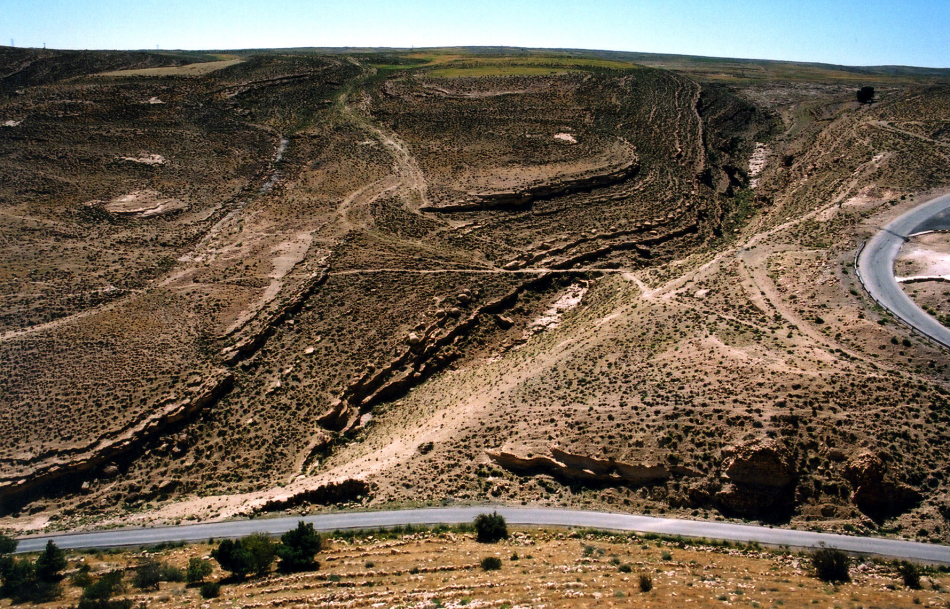 We spent quite a long while just to admire the impressive landscape. 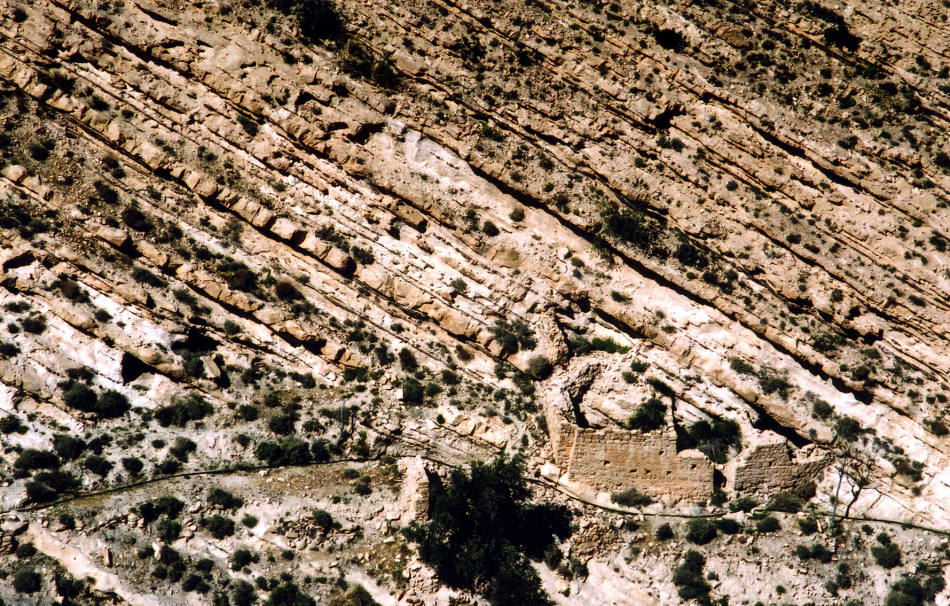 Looking carefully into the surrounding landscape, we could find many ruined buildings.

The ruins and the landscape almost seemed like an abstract painting.

From Shobak, there are various hiking trails toward different directions, including north to Dana and south to Petra.

In a foggy afternoon of December 2016, gunfire broke the silence at the remnants of Kerak Castle.  Following a series of attacks on police patrols and station in Al-Karak, five ISIS terrorists seek refuge at the 12th century Crusader castle as the Jordanian force was closing in.  The government force besieged the castle and eventually killed all terrorists.  14 people were killed in the shootout, including one Canadian tourist.  Terrorist attacks are not common in Jordan, but the 2016 siege of the Kerak Castle and the unstable conditions in Syria have hampered tourism of Jordan in recent years.  Built in the 12th century, the former Crusader stronghold Kerak Castle was not stranger to military siege in history, with the siege of Saladin’s force in 1183 being the most famous.  The siege by Saladin, the Muslim leader from Damascus, coincided with the royal wedding inside the castle between Humphrey IV of Toron and Isabella of Jerusalem.  The siege ended when the force of Baldwin IV, the King of Jerusalem, came for rescue.  The historical incident serves as the background for the 2005 movie Kingdom of Heaven.

It was Friday, 19th of May in 2006, a weekend holiday for the Muslims.  At Wahadat Station in Amman, buses were running on holiday schedule.  It took us sometime to find a bus bounded for Kerak Castle.  Our goal for the day was to make our way on the King’s Highway from Amman to Wadi Musa, the popular base for tourists visiting the splendid lost city of Petra.  It was a two hour bus ride from Amman to the town of Al-Karak. When we got off the bus, the driver told us that there would not be any public transportation from Karak to Tafila on Fridays.  Our original plan was to visit Kerak Castle, take a bus to Tafila, and then hire a taxi onwards to Shobak and Wadi Musa.  Without public transportation, we had to settle with hiring a taxi driver for the day at 40 Jordanian Dinar, taking us uphill to Kerak Castle, and then to Shobak Castle and Wadi Musa.

Kerak Castle is one of the largest castles in the region.  Compared to Krak des Chevaliers, Kerak has a simpler design and rougher craftsmanship.  Kerak Castle has a nice little museum.  I enjoyed reading a little about the history of the castle, the Crusades and the Muslim conqueror Saladin at the bookshop. 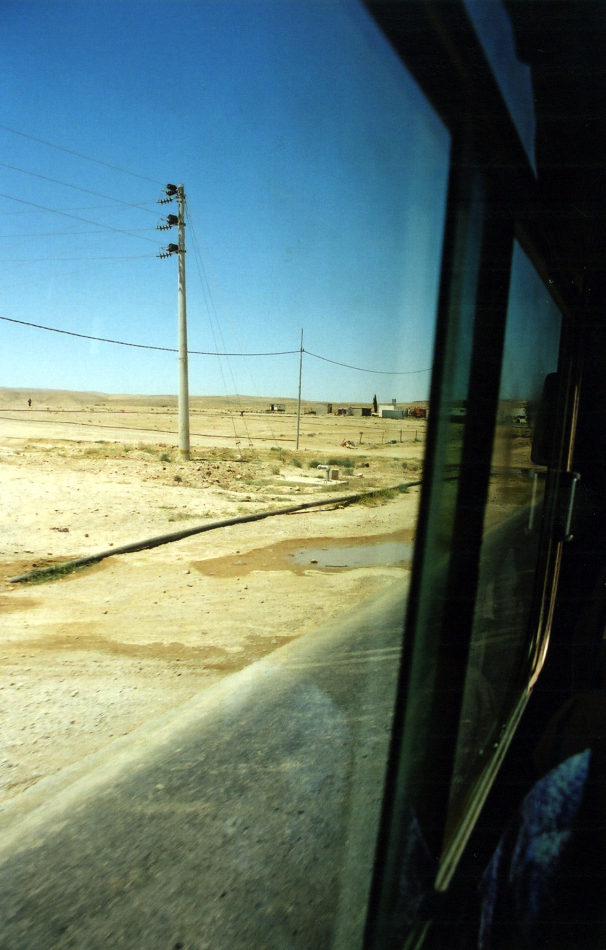 We were lucky to find a bus going to Kerak Castle that was running on the Friday holiday schedule. 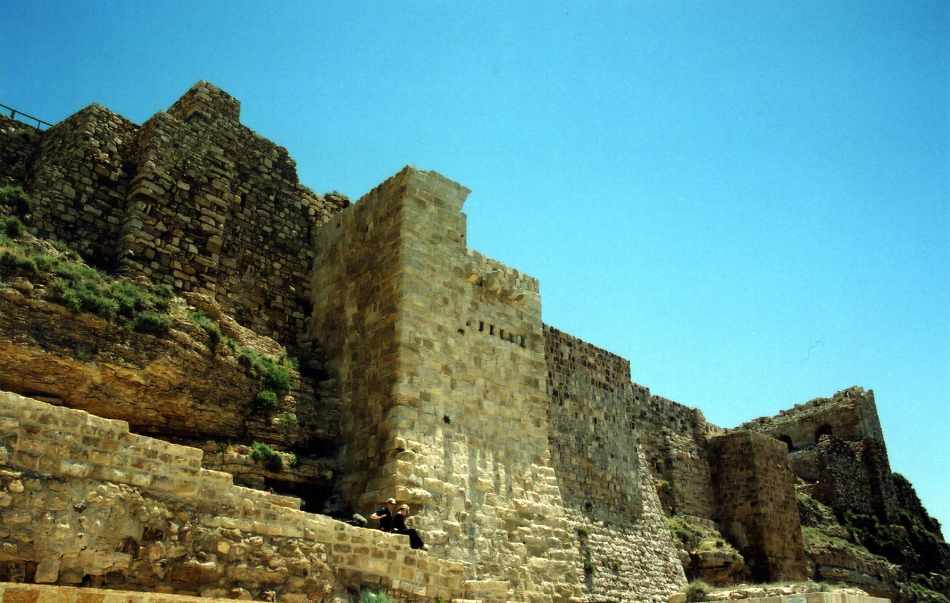 The castle looked spectacular from the town of Al-Karak.

The scale of Kerak Castle is enormous when viewed from the town below.

The castle was empty, but a large portion of the structure remains intact for over 800 years.

Due to the large size, tourists dispersed all over the castle once inside the complex. 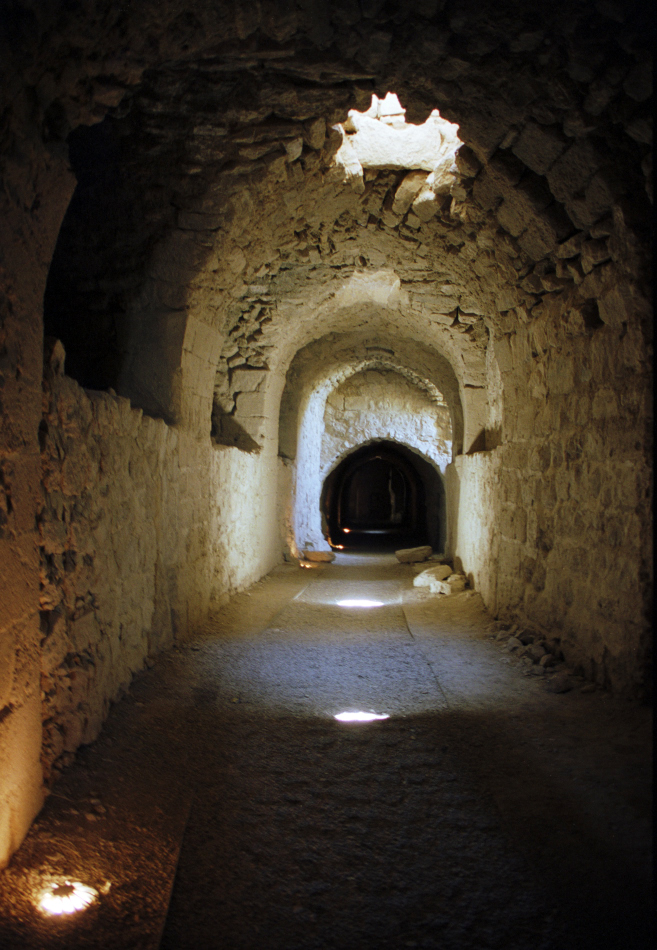 Kerak Castle contains many covered passages protected with thick defensive walls.  During the 2016 terrorist attack, most tourists were hiding in a separate part of the castle to avoid contact with the attackers. 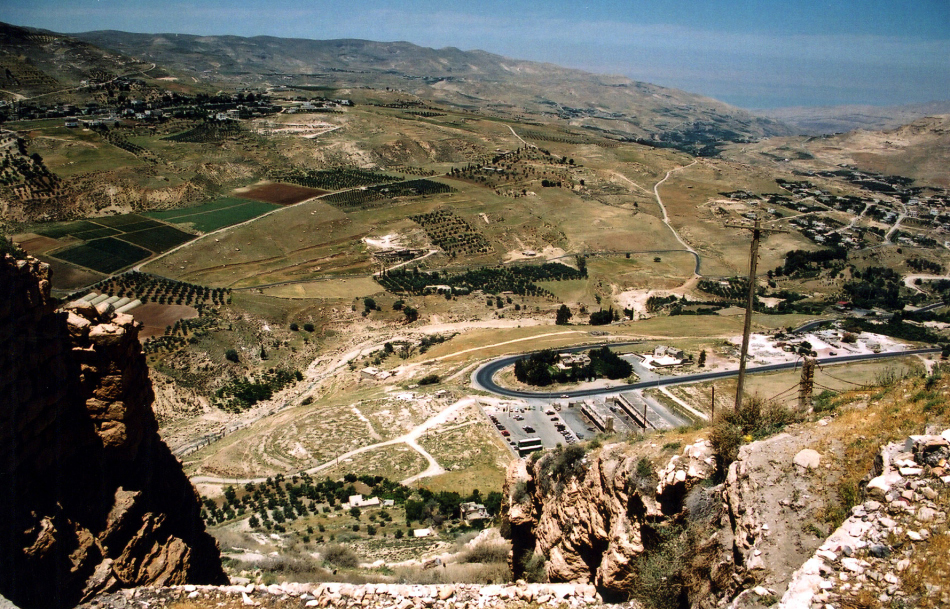 Al-Karak lies 140 km south of Amman, on a hilltop 1000m above sea level.  The Dead Sea is visible from the castle.  Beyond the Dead Sea, the Holy city of Jerusalem is just a short car journey away.