Once there was a legend…

Before the creation of land there was only the expanse of boundless water, on which a large floating raft carrying all kinds of animals searching for land.  Great Hare, the chief among them all, urged the beaver to dive into the water and bring back a particle of earth.  The beaver went reluctantly into the deep deep water but after a long time came back exhausted and empty handed.  The animals then turned to the otter for the request but it too failed reaching the bottom.  The animals fell to despair amid fears of floating in the endless water eternally, then came the small and weak muskrat who was willing to give another go.  Off it went for a day and night and finally resurfaced unconsciously with belly up and paws closed.  The animals pulled the muskrat onto the raft, and opened its paws one by one.  Not until the last paw was opened then they found a single grain of sand.  The Great Hare dropped the sand onto the raft and the magic began.  On the raft, the sand started to grow larger and become rocks and then mountains and then the entire world where all animals could thrive and find their own food.  The first generation of animals lived happily since then and died peacefully.  The Great Hare then created humans out from the various animal corpses, such as the elk, bear and fish, each with their own dialect and tribal origin related to the deceased animal.

This version of a cosmogonic legend was passed down orally throughout generations of the Algonquians, the people who dominated pre-colonial Eastern Canada including the Atlantic Coast, Quebec, Ontario and the Great Lakes regions.  Their ancestors roamed over these lands since thousand of years ago, leaving vivid evidences of their beliefs with pictographs and petroglyphs discovered throughout the Canadian Shield.  The tale combining water, animals and Algonquin pictographs is the story of Bon Echo Provincial Park.  With the exact etching dates still unknown, the 250+ pictographs on over 65 cliff surfaces along Mazinaw Lake at Bon Echo Provincial Park is widely recognized as one of the oldest First Nations pictograph sites in the Canadian Shield region.  Etched with red ochre (a natural mineral of silica and clay with iron oxide), these pictographs of human, animal and abstract figures were applied onto the cliff surface by people on canoes.  Most of these rock art were used in search for helping spirits, or in rituals of shamanism, when the shaman used these pictographs for healing, prophesy and vision quests.

On a Friday evening in early summer 2013, we headed off to Bon Echo Provincial Park after work.  After over a decade since Angela first explored the park in a canoe trip, we decided to revisit this beautiful provincial park for its starry sky, pristine lake scenery, and mysterious pictographs on the 100m Mazinaw Rock cliffs.   After almost three hours of driving from Toronto, we arrived at Lennox & Addington Dark Sky Viewing Area south of Bon Echo.  Unfortunately half the night sky was covered with clouds.  We left disappointingly and headed for our accommodation at Northbrook’s Pine Grove Motel, about 15 minutes drive south of Bon Echo.  After midnight, the sky cleared up and we had some fine moments of stargazing outside the motel.  Early in the next morning, we drove north on Highway 41 and entered Bon Echo Provincial Park.  After a short walk along the shore of Mazinaw Lake, we rented a canoe at Bon Echo Outfitters to explore the lake.  We left the small cove at Lower Mazinaw Lake, passed the unique channel The Narrows, and paddled along the cliffs of Mazinaw Rock at Upper Mazinaw Lake looking for the Aboriginal pictographs.  At one point, we docked our canoe by the shore and hiked up to the summit of the rock cliff for a birdeye view of the park.  After canoeing, we returned to the Narrows where a bench and a lamp post offered a magnificent spot to enjoy the scenery of Mazinaw Rock.  We stayed at the Narrows for the rest of the afternoon, braving the cold water with our feet, taking time-lapse photography of the scenery, watching boats coming through the Narrows every twenty minutes or so, listening to the sound of gentle waves and occasional songbirds, and enjoying every tranquil moment of daydreaming under the warm afternoon sun.   It was the perfect picture of Ontario landscape, the legendary homeland of Aboriginal Algonquins, and one of the splendid settings of our delightful Canadian memories.

That night, we were the only visitors staying at Pine Grove Motel in Northbrook. 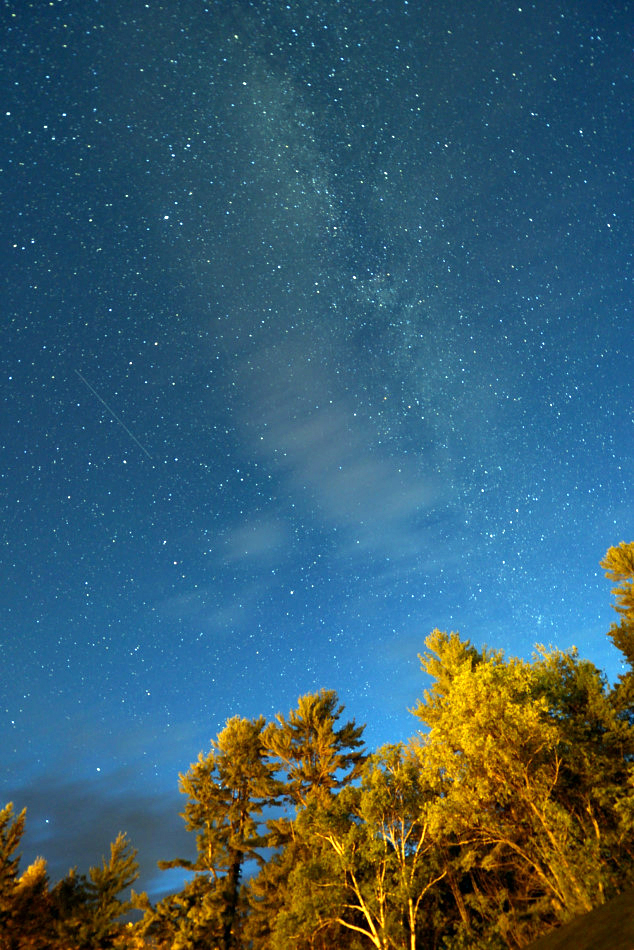 The sky cleared up after midnight, and we indulged ourselves with some splendid moments of stargazing under shooting stars and a faint Milky Way.

That night was cool with mild wind. The dark sky was not entirely clear but we still got a glimpse of the Milky Way with naked eyes.

The next day, we entered Bon Echo Provincial Park under the morning mist.

We decided to rent a canoe to explore the vast Mazinaw Lake. 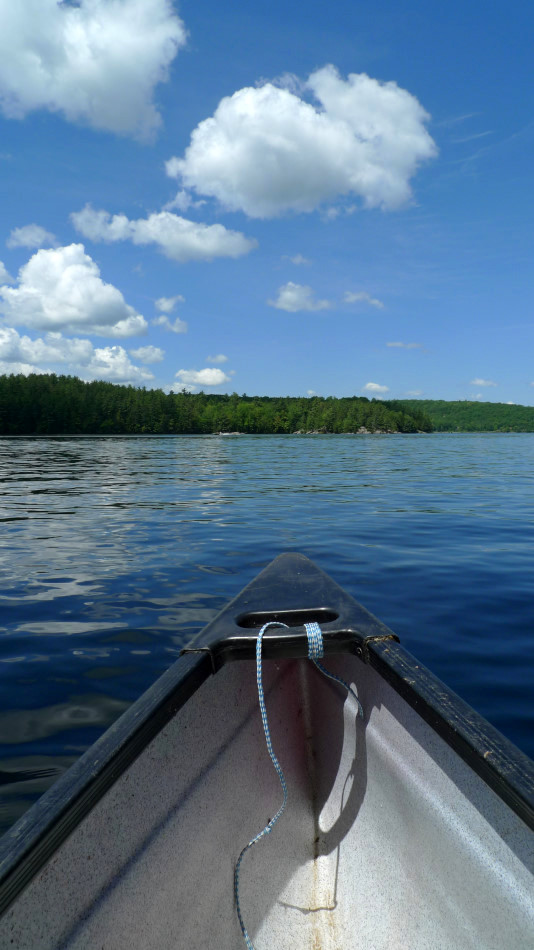 Canoeing is the best way to enjoy Mazinaw Lake.

Given the cliffs of the 100m Mazinaw Rock, Bon Echo is also popular for rock climbing. 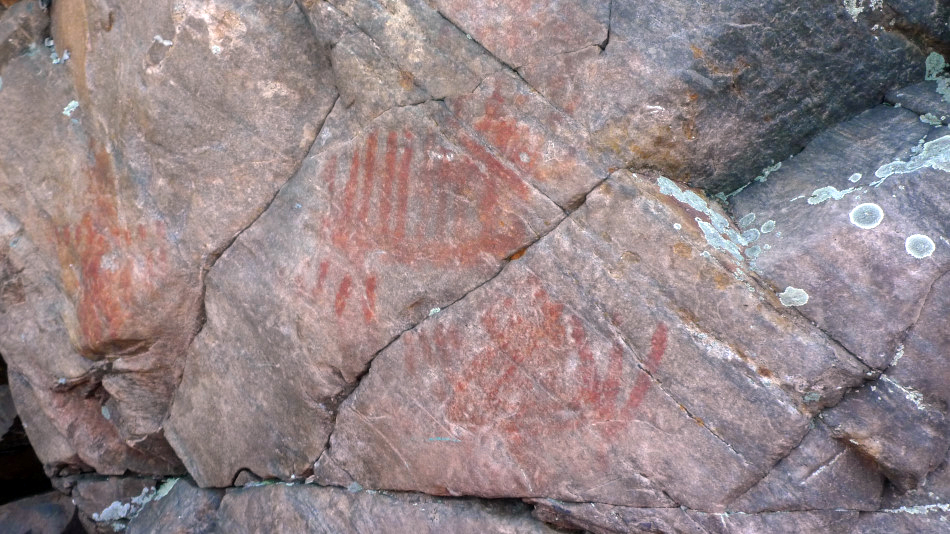 We docked our canoe and walked up to the top of an island for its amazing view.

We paddled by this quiet lone bench and lamp post at the shallow channel called The Narrows..

The bench at The Narrows was the perfect spot to spend the afternoon.

When there was no wind and boat, the lake was like a perfect mirror for Mazinaw Rock.

We tried a few times walking into the shallow water in front of the bench at The Narrows as it seemed temptingly clean.  Despite less than a foot deep and the warmth of early summer, We couldn’t stand the freezing water for long. 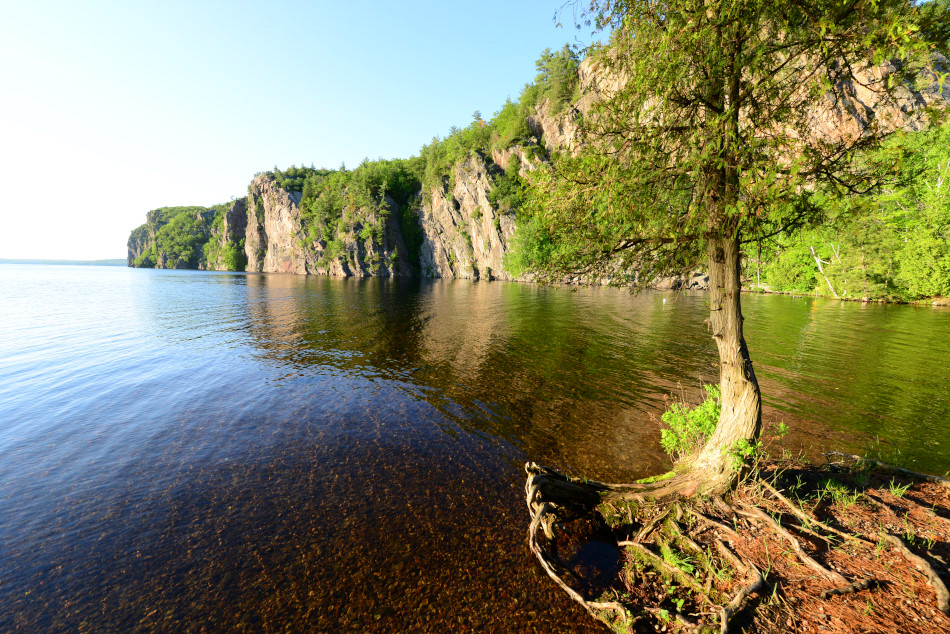 We stayed at The Narrows till late afternoon.

The tree roots by the water at The Narrows looked sculptural.

The low sun reminded us that it was almost time to leave. 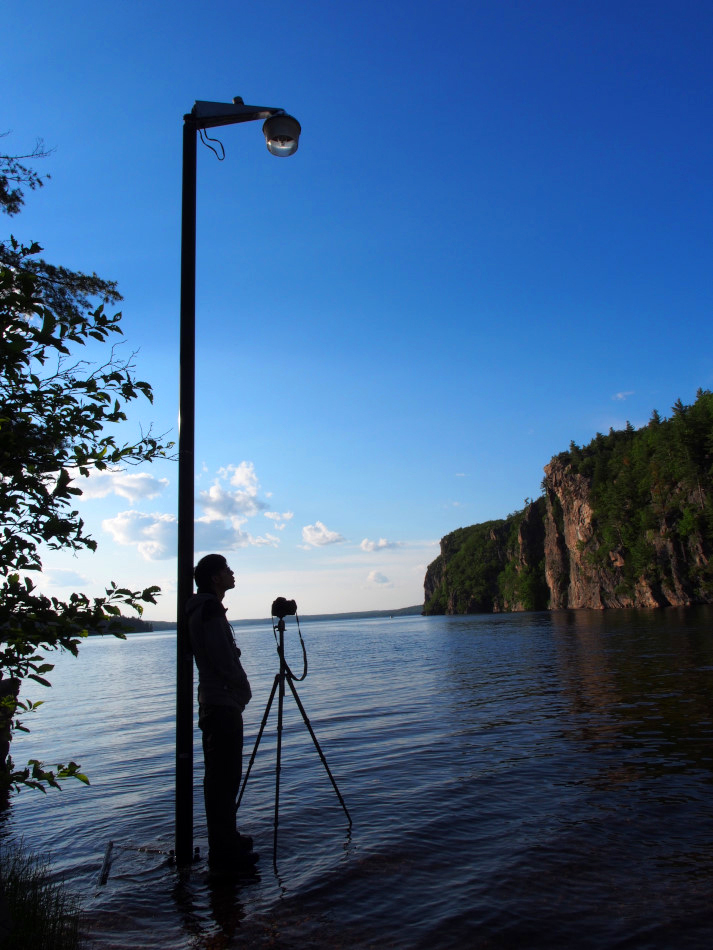 Final view of Mazinaw Rock at The Narrows through the viewfinder.