Linking the village of Yuen Long (元朗) and Tseun Wan (荃灣), the Yuen Tsuen Ancient Trail was once a major route for farmers from Yuen Long to bring out their produces to the market in Tseun Wan.  Today, it is a pleasant hiking trail that leads visitors to enjoy the scenery of Tai Lam Country Park (大欖郊野公園), former villages such as Tsing Fai Tong (清快塘) and two of the city’s longest bridges: Ting Kau Bridge (汀九橋) and Tsing Ma Bridge (青馬大橋). 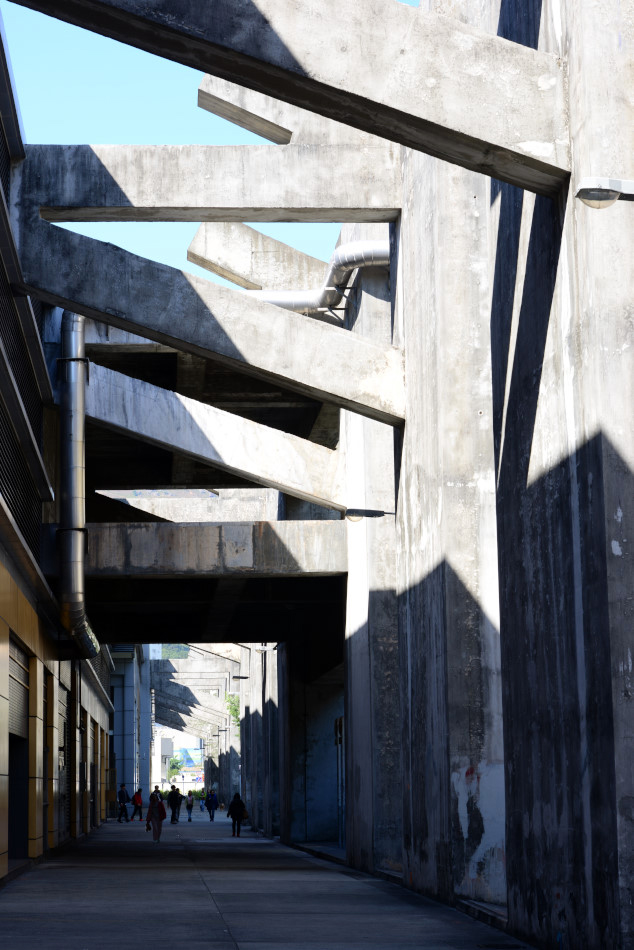 Our hike began from Tsuen Wan West Station and passed by Tsuen Wan Adventist Hospital to reach the trailhead. 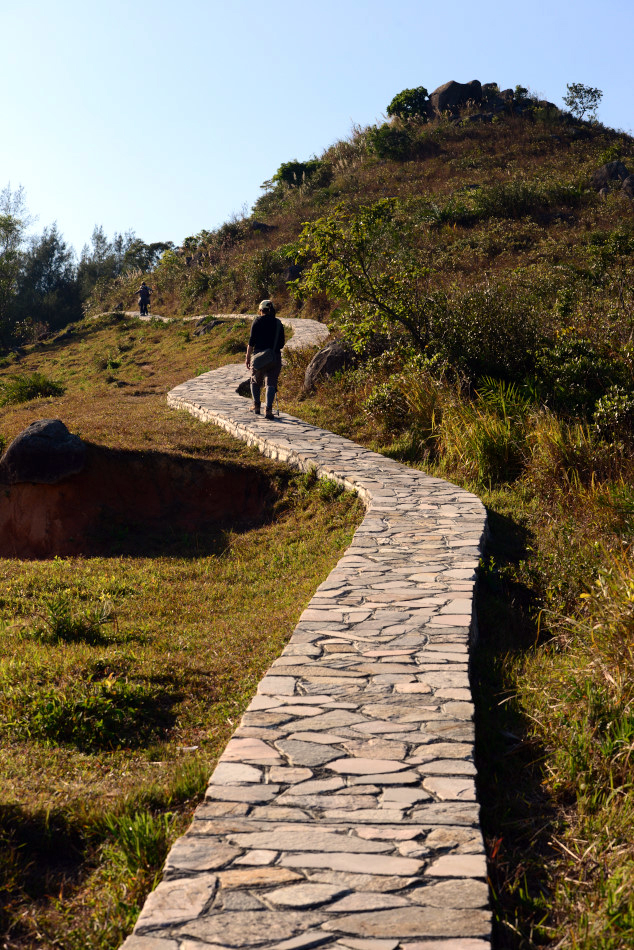 Soon the trail led us up the hill of Ha Fa Shan (下花山).  The path was well paved with stones. 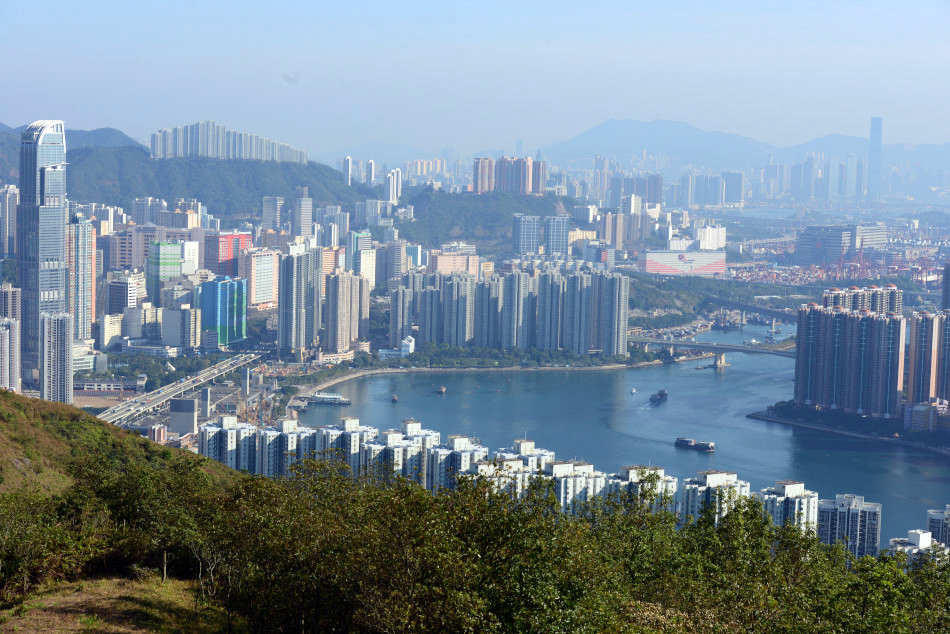 Known as one of the world’s busiest port, Hong Kong’s container port is located right at the channel.

Further down the road the trail led us further west where we were treated with great views of Ting Kau Bridge (汀九橋) and Tsing Ma Bridge (青馬大橋), two of the city’s most important bridges connecting the metropolis with its international airport. 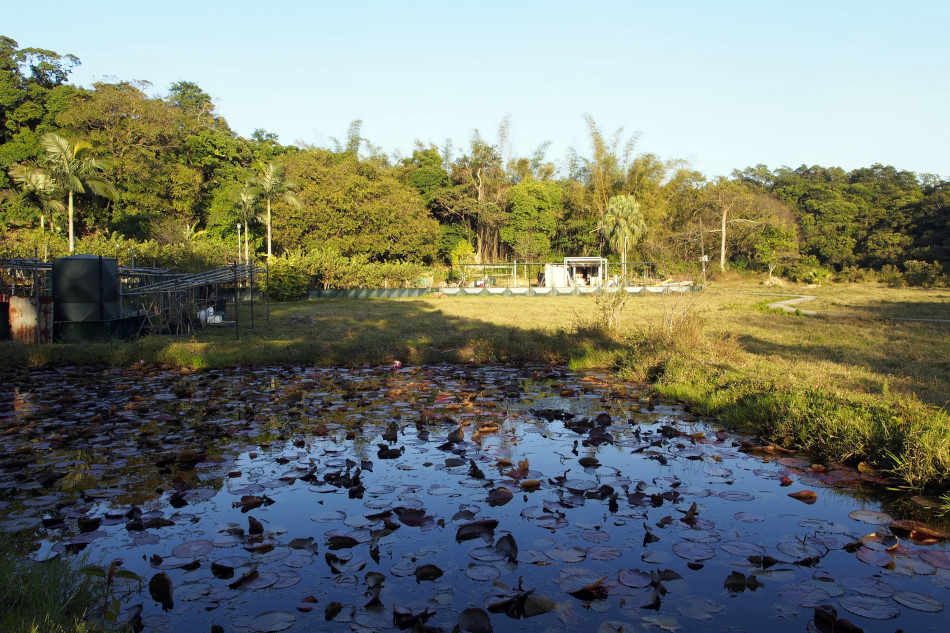 Another highlight of the trail came as we arrived at the former village of Tsing Fai Tong (清快塘).  The village used to be a 200-year old Hakka village of the Fu clan.  Today, most villagers had moved to the new village at Sham Tseng (深井), about 45 minutes form their former home.

In 2002, a family of former villagers returned and set up a farm called Parent Farm (喜香農莊) at Tsing Fai Tong.  Many hikers stopped at the farm to enjoy their seasonal flowers and beautiful lily pond.

We came at the perfect moment of the year to enjoy the waterlilies.

While hikers enjoyed the waterlilies, their pets got a chance to have some fun at the farm.

From Tsing Fai Tong, we chose to end our hike at Sham Tseng (深井) right in front of Tsing Ma Bridge (青馬大橋).

Under the shadow of the busy highway Tuen Mun Road, the village of Sham Tseng (深井) is a well known village in Hong Kong.

Other than its view of Tsing Ma Bridge, Sham Tseng (深井) has been famous for roast goose for decades.

We couldn’t resist but to end our day with the famous Sham Tseng roast goose for dinner.

The moat, blue brick defense wall and guard towers of the 500-year-old Kat Hing Wai Walled Village (吉慶圍) remind visitors that villagers in the New Territories were once living in the danger of rival clans, bandits and the most important of all, pirates.  For self protection, many villages in the Ming and Qing Dynasties constructed defensive walls around their homes.  Walled villages mushroomed in the New Territories, creating walled compounds for specific family clans.  In the 20th century, many villages demolished their walls or had them partially removed, while most houses have been replaced with modern homes.  With a relatively well preserved moat and wall, Kat Hing Wai is actually quite a rarity.  Measured roughly 100m x 90m, Kat Hing Wai is one of the better preserved walled villages in Hong Kong.  Built during the era of Ming Cheunghua Emperor (1464 – 1487) with the 5m defensive wall constructed in the 17th century, Kat Hing Wai was a close knitted community of the Tang clan. 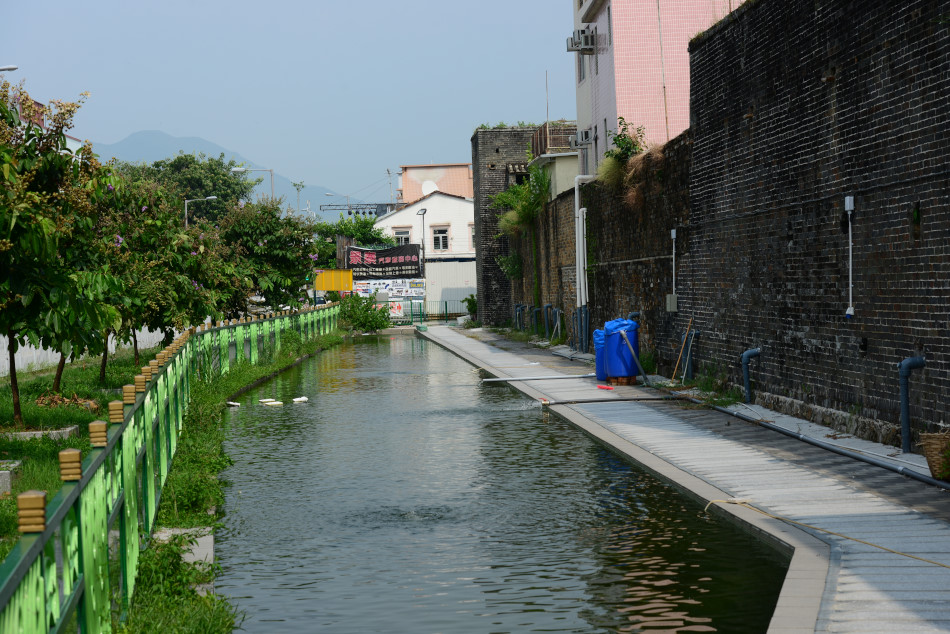 Outside Kat Hing Wai Walled Village, a small part of the original moat has been preserved.

For security reason, only a small opening serves as the entrance for the walled village. 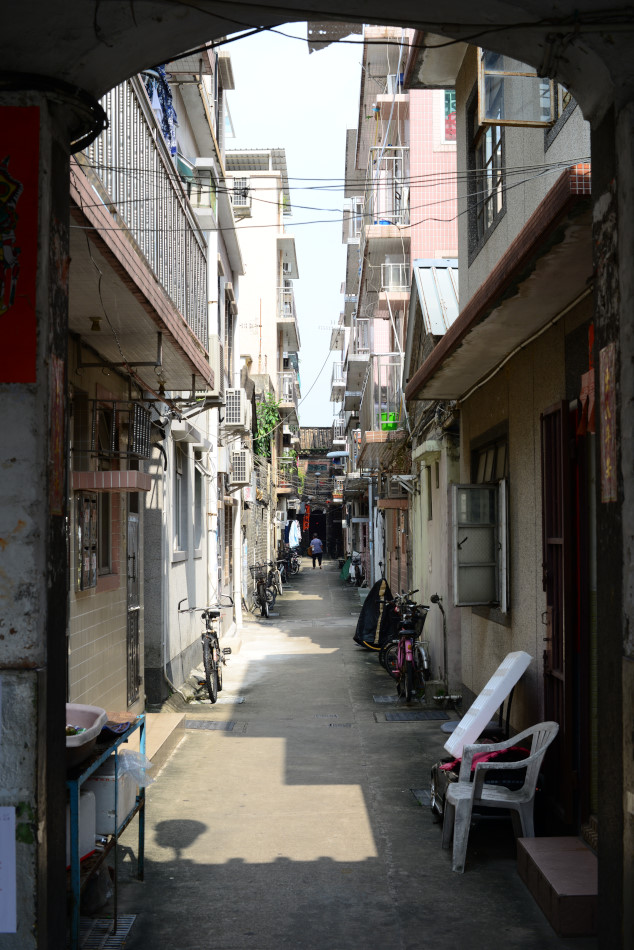 Most houses in the walled village have been replaced by modern houses.

The central lane leads to the temple hall.

There were a wooden desk and a religious altar in the temple hall.

Antique ritual tools could be found on the altar table. 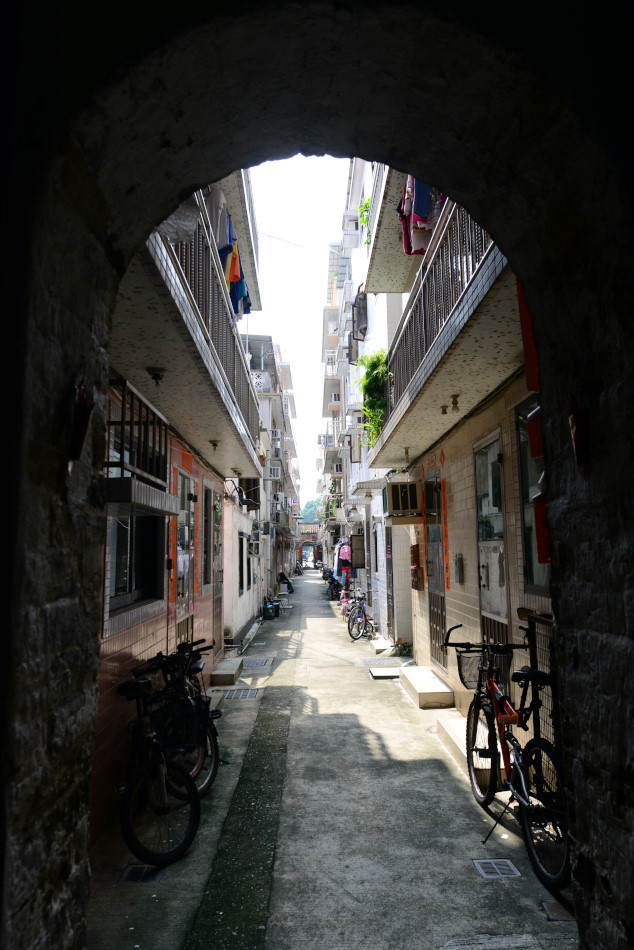 The temple hall opens directly towards the only entrance of the walled village.

We didn’t see anyone during our brief visit of the walled village.

Almost all buildings have been replaced by modern buildings.  The original character of the walled village has been somewhat diminished in the modern era. 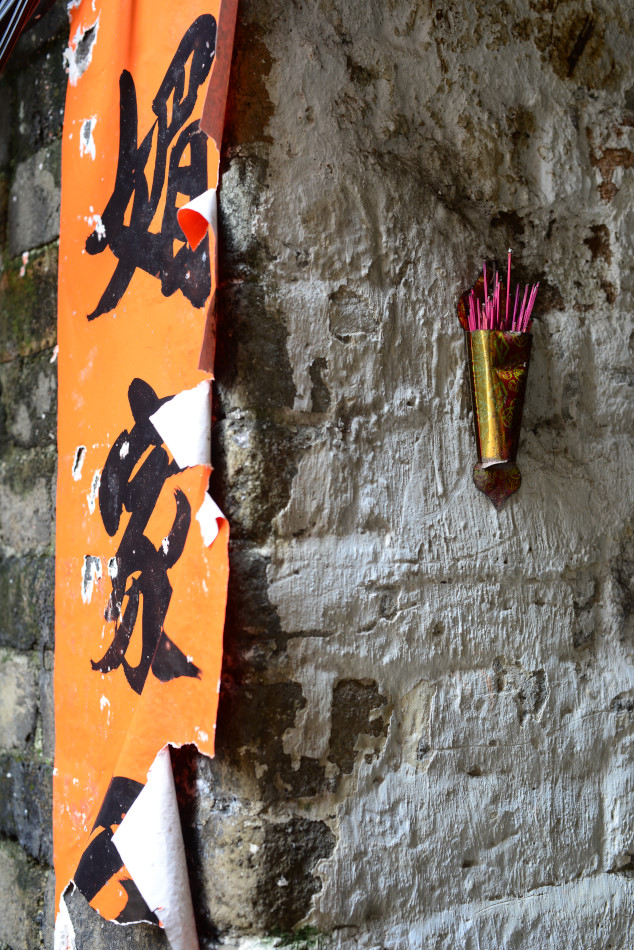 Some older houses still had traditional banners on their outer walls.  These banners usually advocate good fortune for the entire family. 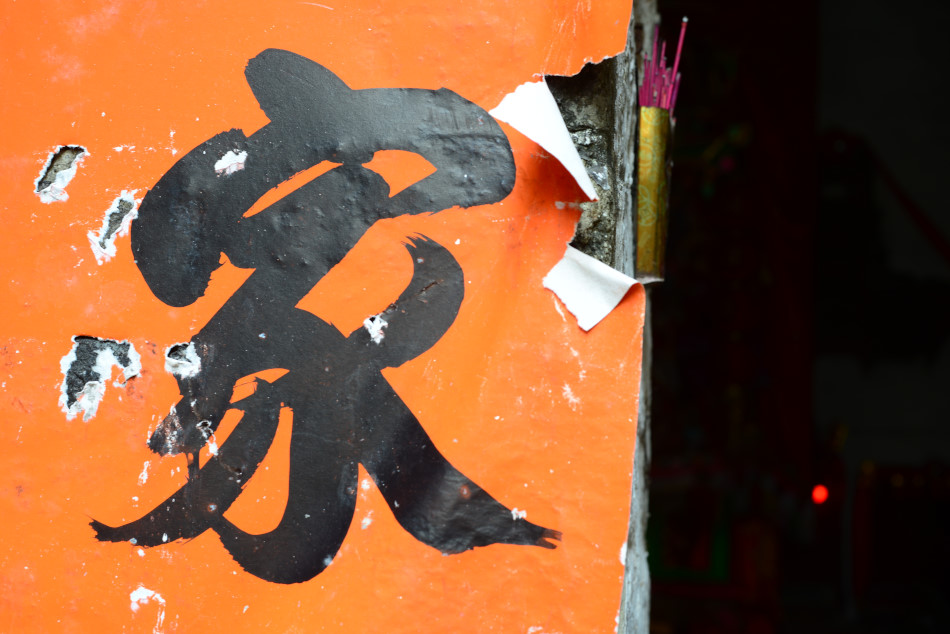 “Kar”, the Chinese character for family, illustrates the importance of family bonding in a traditional walled village.

When looked closely, traditional touches could still be seen at certain houses in Kat Hing Wai.

In the past, the four cannon towers were the tallest structures in the village.

Today, the defensive structures of the walled village have been undermined by modern buildings.  Even the well known Kat Hing Wai Walled Village has no exception.  This is the harsh reality of contemporary Hong Kong.

Known as the “backyard” of Hong Kong, Nam Sang Wai (南生圍) is an area of tranquil wetlands north of Yuen Long (元朗).  The “Wai” in “Nam Sang Wai” refers to “gei wai” (基圍), an old method mainly for shrimp culture introduced to Hong Kong in the 1940’s. Bounded by man made embankments, gei wai is a shallow pool in a mangrove wetland with 10 to 30 cm of water collected from the Deep Bay (后海灣).   The shrimp farmer would use a water gate to control the amount of incoming water from Deep Bay.  The sea water would also bring in juvenile fish and shrimps.  The shrimps would  then feed on the organic matters from the mangroves.  Gei wai shrimps (基圍蝦), usually steamed, has became a local delicacy throughout the years.  The gei wai method has been mostly phased out nowadays.   The former gei wai pools and fish ponds of Nam Sang Wai have became a semi-manmade wetland where visitors enjoy the serene waterways, reed clusters and pockets of grasslands, and learn more the wetland ecosystem.  It also offers a network of pleasant footpaths winding through waterways and pools, providing the perfect venue for an afternoon stroll, wedding photos, and even filming set for movies, TV shows and music videos. 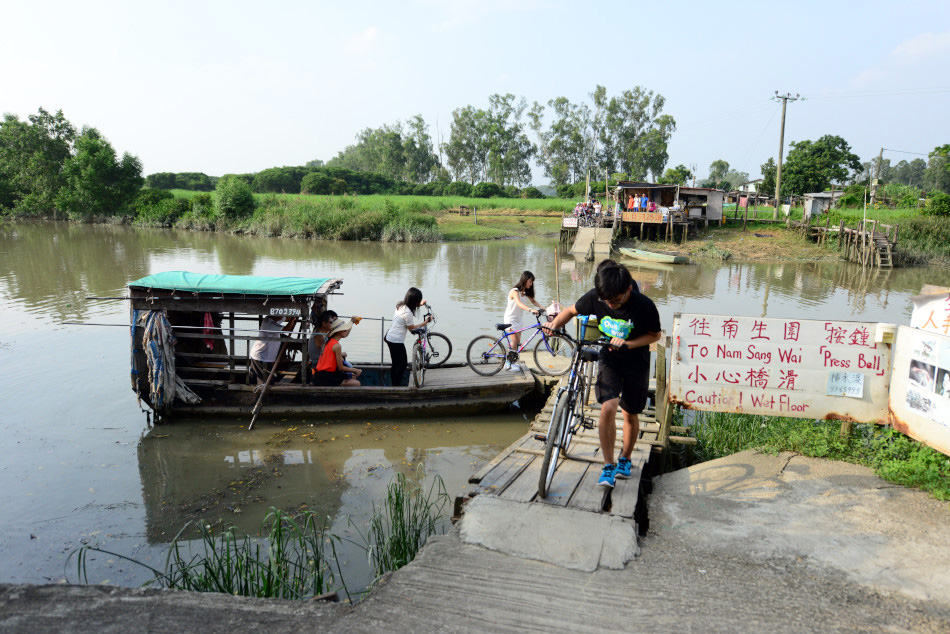 The first impression of Nam Sang Wai for most visitors is its overwhelming serenity of water networks.

Some old houses in Nam Sang Wai are abandoned, and are sometimes used for filming local movies.

The boardwalk by the old fish ponds are popular spots for photos.

The large lawn at Nam Sang Wai is equally popular for couples, families and pets to hang out. 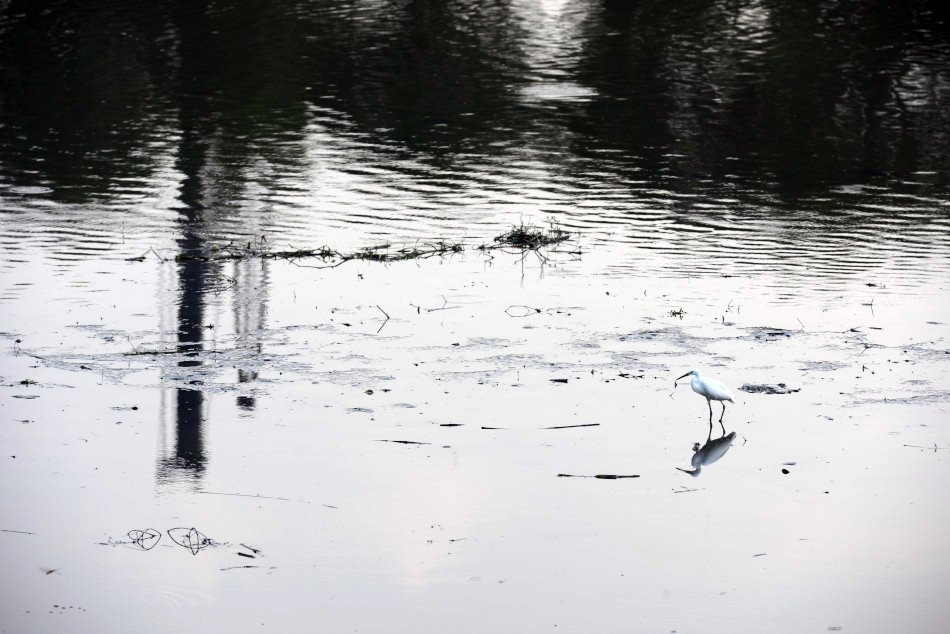 Nam Sang Wai is a hotspot for both migrating birds and local waterfowls.

Beyond Shan Pui River (山貝河), the urban and industrial developments of Yuan Long seem like they may one day encroach into the wetland territories.

The peaceful water of Nam Sang Wai remains like a flawless mirror. 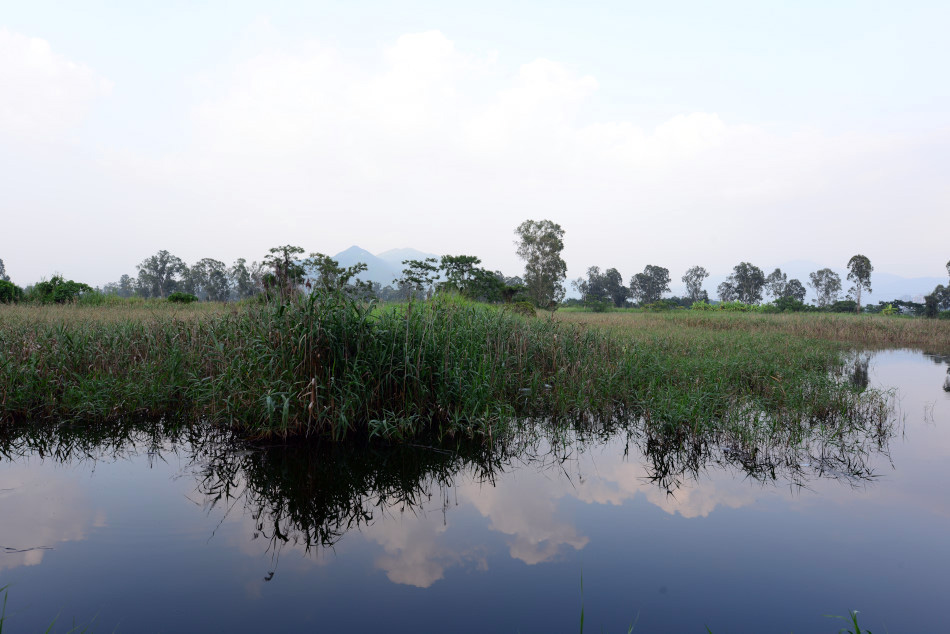 As a natural system to purify the surface runoff of the city, wetlands are essential in the entire water cycle of the city.

As villagers move out of the rural areas, some old stores and houses in Nam Sang Wai are gradually crumbling into ruins.

A handful of occupied houses remain in Nam Sang Wai.

Though most of them are in need of restoration. 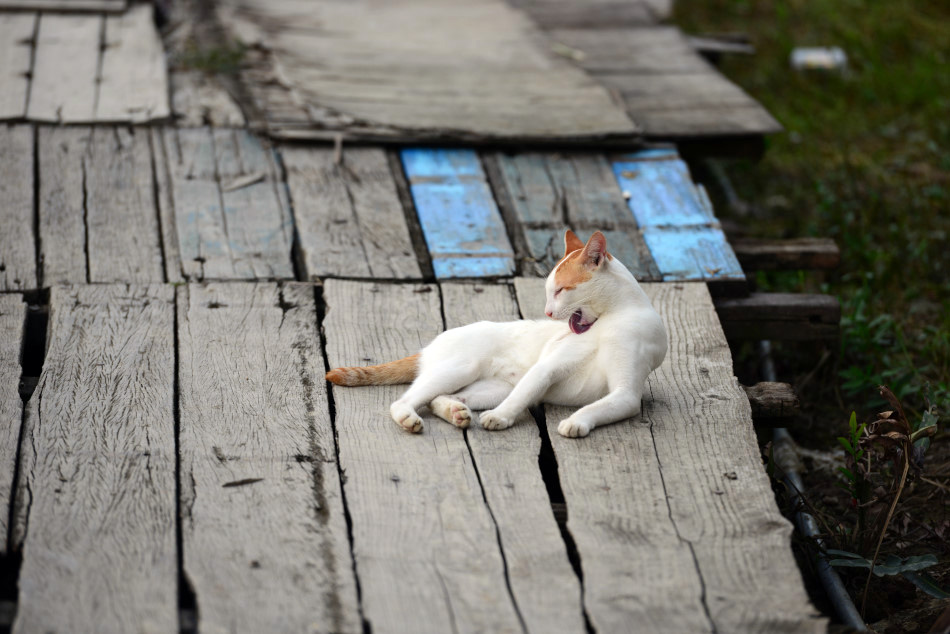 Like pets in other rural areas of Hong Kong, the cats and dogs in Nam Sang Wai also lead peaceful lives. 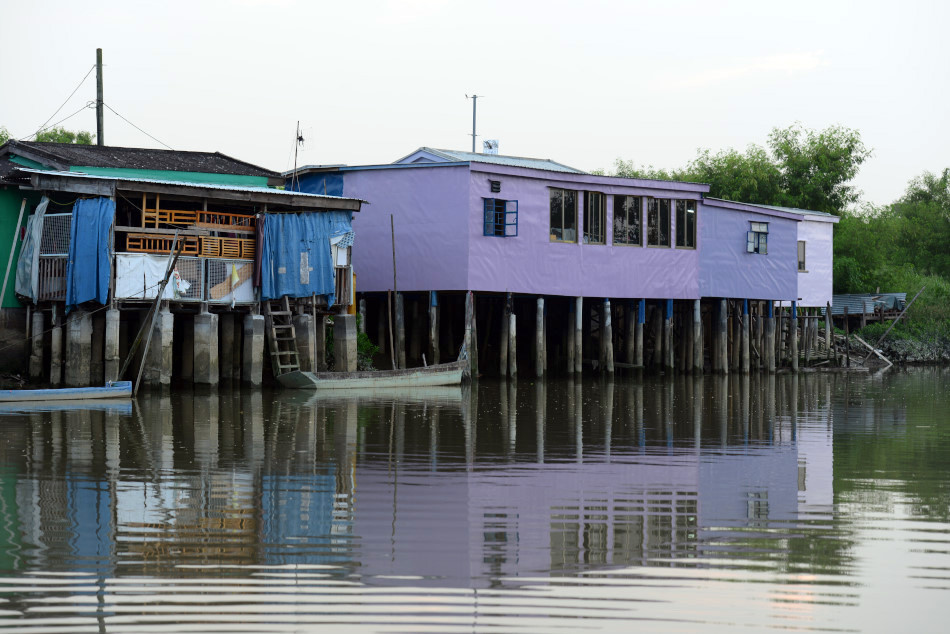 A number of village homes built on stilts can be founded along Shan Pui River (山貝河). 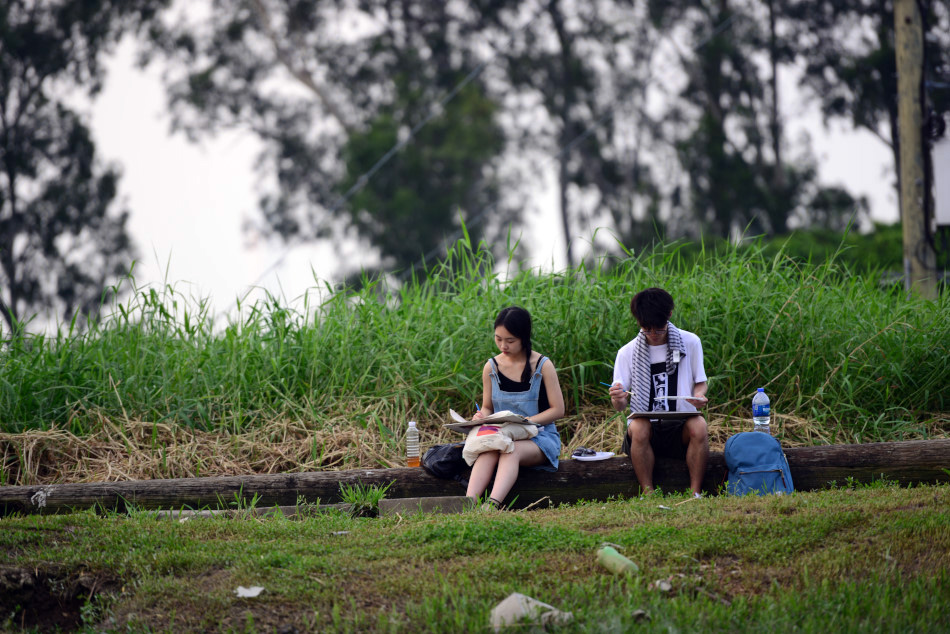 Such serene and picturesque setting are great for photography and sketches.

After a long and relaxing stroll in Nam Sang Wai, the small man-powered boat at Nam Sang Wai Pier is always around to bring visitors back to the city’s side.

An unexpected opportunity came up.  I found myself tagging along my cousin to participate in a traditional poon choi dinner at the Tang Ancestral Hall in Ping Shan, a rural area between the new towns of Yuen Long and Tin Shui Wai.  Poon choi is a traditional dish originated from the villages of the New Territories.  It was believed that poon choi was invented in late Song Dynasty (late 13th century) when villages in the New Territories gathered their best dishes available together in large wooden washbasins to serve the exile Song emperor and his army.  Today, poon choi is often served in large stainless steel or ceramic bowls for everyone to share around the table.  The food served in poon choi varies, but usually it is a combination of seafood and meat.  Throughout the centuries, poon choi has become a signature dish for communal gatherings and celebrations in many parts of the New Territories.

Despite largely renovated in recent years, the original Tang Ancestral Hall in Ping Shan was built over 700 years ago by the Tang Clan.  Today it is still used regularly by the Tang Clan in Ping Shan for rituals and gatherings.  In 1993, the government established the Ping Shan Heritage Trail to promote tourism in the area.  The trail connects a number of historical sights and an interpretation centre housed in the former Ping Shan Police Station.  The Tang Ancestral Hall is one of the star attractions along the trail.  With an entry courtyard, a central hall for reception, and an inner hall to house the ancestral alter, the Tang Ancestral Hall is a typical example of a traditional ancestral hall, which in ancient times functioned as the social nucleus of a clan village.

Before dinner, we had a chance to stroll around the area.  We walked by Tsui Sing Lau, Hong Kong’s only historical pagoda dating back to 600 years ago, an old well that once served the villagers for over two centuries, and the entrance to Sheung Cheung Wai, a walled village constructed more than 200 years ago.  Despite drastically transformed from the heydays, clan villages and walled communities are still common in rural areas of the New Territories.  Many walled villages, like Sheung Cheung Wai in Ping Shan, were once heavily fortified with high walls and deep moats for self-defense against pirates.  Moats were filled and cannons removed, but many wall enclosures survived to the present day.

With its 700-year history, the Tang Ancestral Hall is the star attraction of Ping Shan. 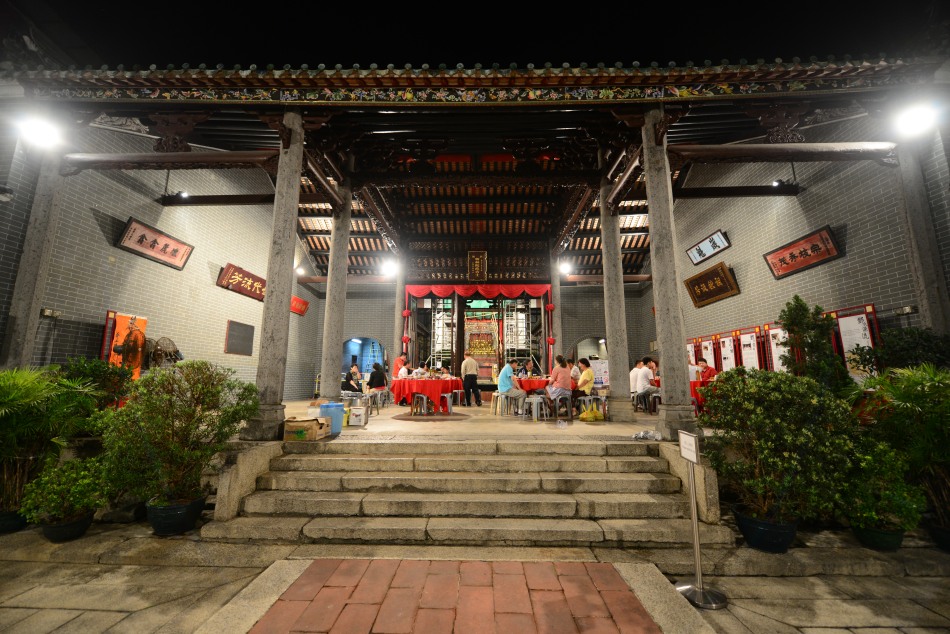 Dining tables were set up at the semi-open central hall of the Tang Ancestral Hall.

Warmed with a portable gas stove throughout the dinner, the poon choi was the centre piece on the dining table.  The wine-marinated chicken and duck soup on the side were equally impressive. 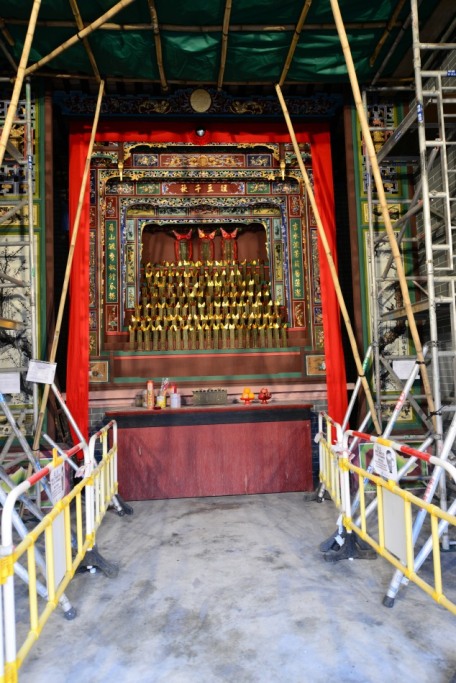 The Tang Ancestral Hall has been undergoing major renovations in recent years.  Scaffolding has been set up at the inner hall where the ancestral altar is located.

Many farmlands in Ping Shan and its surroundings have been converted into parking lots and new housing estates, including the new town of Tin Shui Wai.  The land where Tin Shui Wai occupies was mainly marshland a century ago.  Villagers then converted the marshes into rice paddies and fish ponds.  As the economy changed, most rice paddies and fish ponds were abandoned and the government finally stepped in to transform the land into the new town of Tin Shui Wai in the late 1980s and early 1990s. 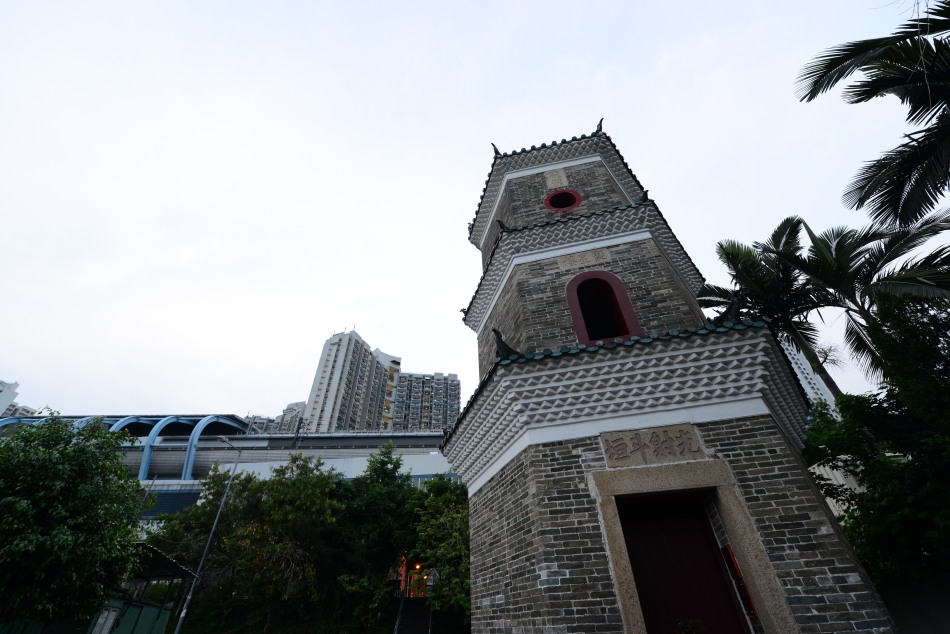 The Tsui Sing Lau pagoda originally contained 7 storeys.  It was used for the worship of the star constellations for academic achievement. 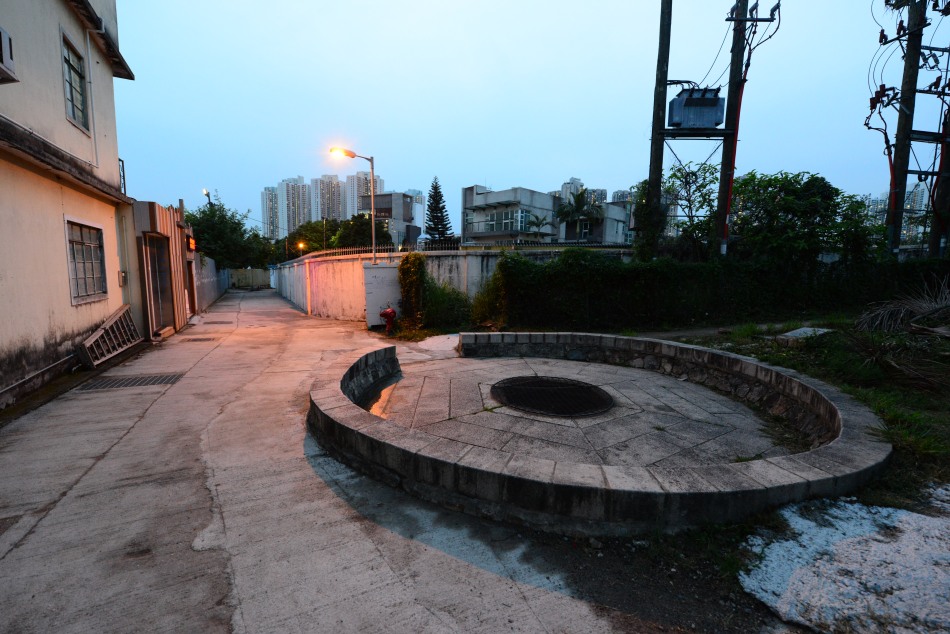 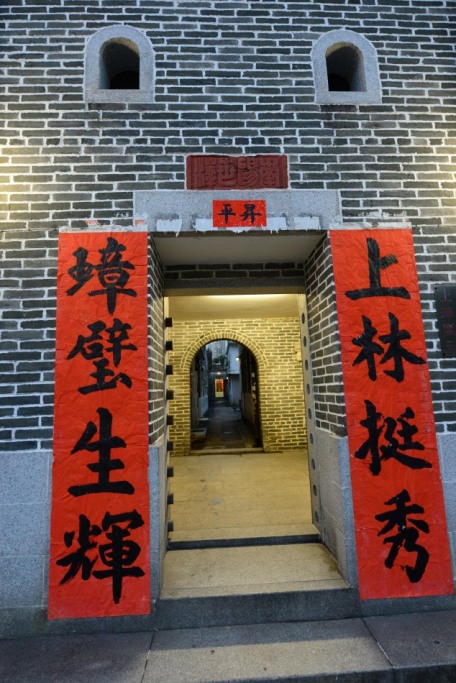 Sheung Cheung Wai remains as a example of the traditional walled villages in the New Territories.