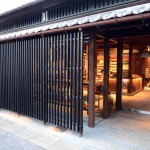 In October 2014, we stumbled upon a small shop in the shopping centre Tokyo Midtown.  Utensils, furniture, cloths, and other miscellaneous household items were on display on wooden shelves and stands.  Merchandises were displayed in clusters according to brands from different parts of Japan.  The design of that attractive small shop in the middle of a high-end shopping arcade, according designer Yusuke Seki, was inspired by shotengai (traditional shopping street).  We stayed at the shop for quite some time, and ended up picking up a blue umbrella with a nice wooden handle.  At its underside, there was a small label with an illustration of two deer and a traditional logo saying Nakagawa Masashichi Shoten (中川政七商店).  Later on, we did some online research and realized that Nakagawa Masashichi Shoten originates in Nara, and has been around for three centuries.

Opened in 1716, Nara’s Nakagawa Masashichi Shoten just celebrated its 300th anniversary.  Originally, the small Nara shop produced hand woven textiles for samurai and monk ceremonial robes.  The textile was known as Narazashi, or sarashi bleached hemp textile.  During the Meiji Period (1868-1912), the society went through a dramatic change.  Nakagawa Masashichi Shoten was forced to diversify its focus on other products such as table cloths and handkerchief.  Entering the modern age, the shop defied all odds of modernization, persistently remained faithful to its traditional techniques and craftsmanship.  Nakagawa, the 13th president who joined the family business in the last 15 years or so, tested the potentials of his traditional shop to a new level.  Not only did he opened new shops outside of Nara like Tokyo and Osaka, Nakagawa also re-branded the company, and gave new life to old products such as using the old technique of mosquito net making for the new best selling fukin (Japanese style table cloth).  Furthermore, Nakagawa proactively engaged in fruitful collaborations with other craft companies across the country to come up with new brands and merchandises suitable for the contemporary era.

This time around, we were in Nara after a long day of temple hoping.  We promised ourselves that we couldn’t leave the city without visiting the Yu Nakagawa Main Shop (遊中川本店), the flagship store of Nakagawa Masashichi Shoten located at a tranquil alleyway near Sanjo Dori.  At one corner of the shop, several merchandises commemorating the 300th anniversary of Nakagawa Masashichi Shoten were on display.  A beige cloth with beautiful embroidery was a reproduction of their 1925 product exhibited at the International Exhibition of Modern Decorative and Industrial Arts in Paris, the design world fair that gave birth to Art Deco.   90 years on, Nakagawa Masashichi Shoten is still standing at the crossroad between the old and new, advocating a good mix of traditional crafts and contemporary aesthetics.  At their 300th anniversary, their locally made fabrics and household merchandises are as cool and modern as ever.

The design of Yu Nakagawa is a comfortable blend of traditional and contemporary elements. 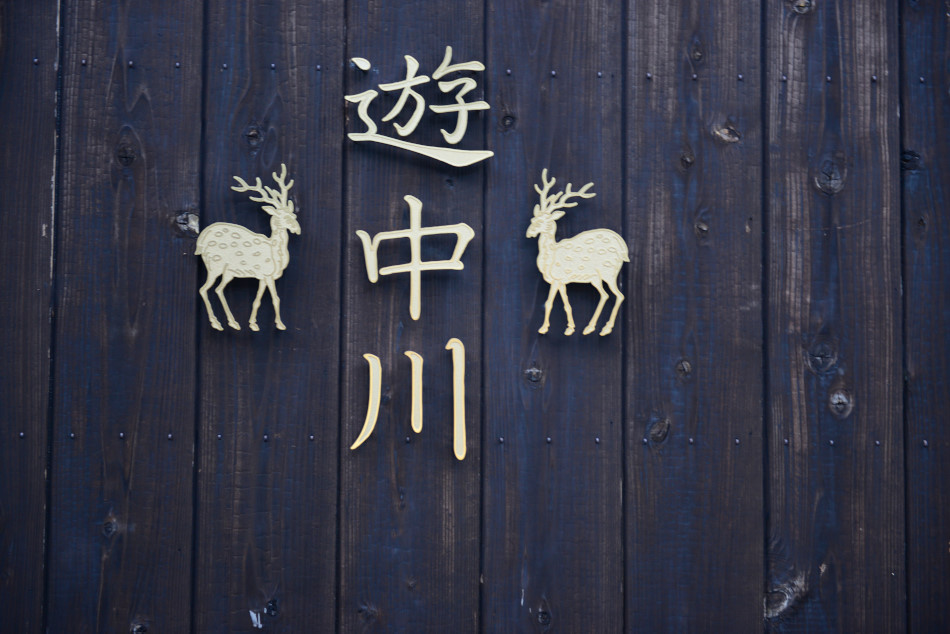 The signage of Yu Nakagawa Main Shop (遊中川本店) with the iconic deer symbolizing the city of Nara.

Rows of colourful textiles behind the cashier counter attracted our attention right from the beginning. 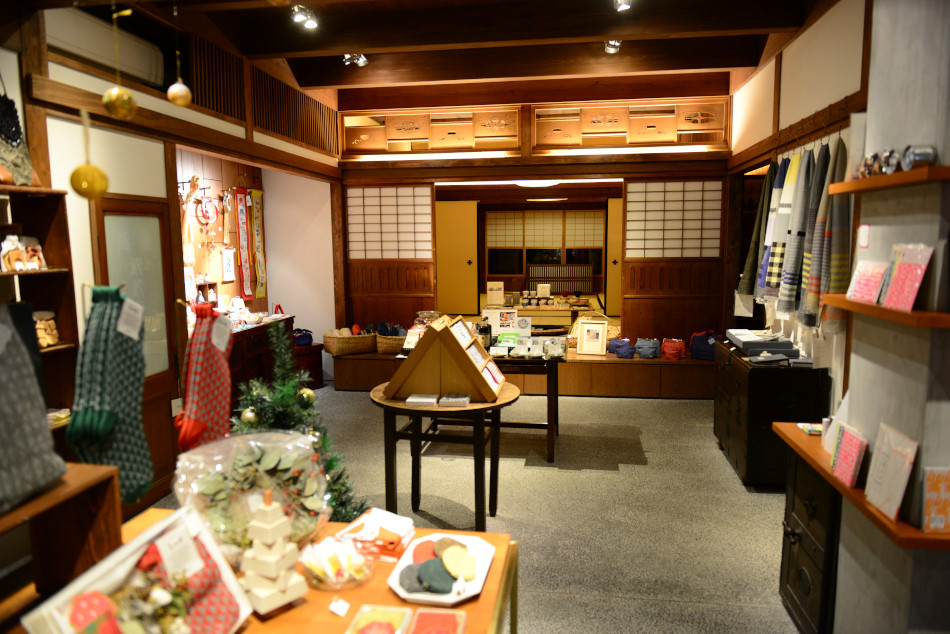 Most items on display came from their own brands, such as 2&9, their line of well made socks. 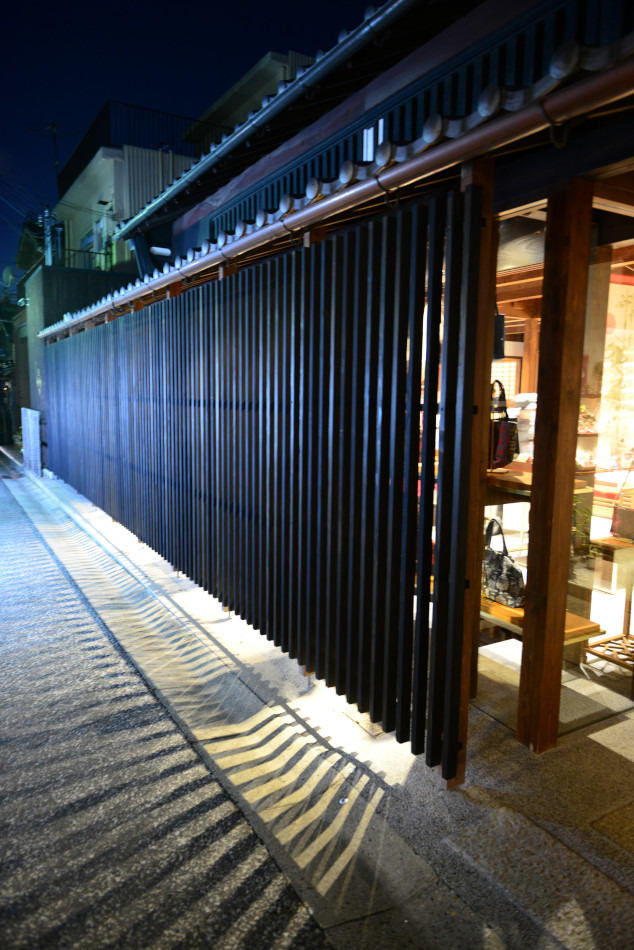 It was already dark by the time we left Yu Nakagawa Main Shop. 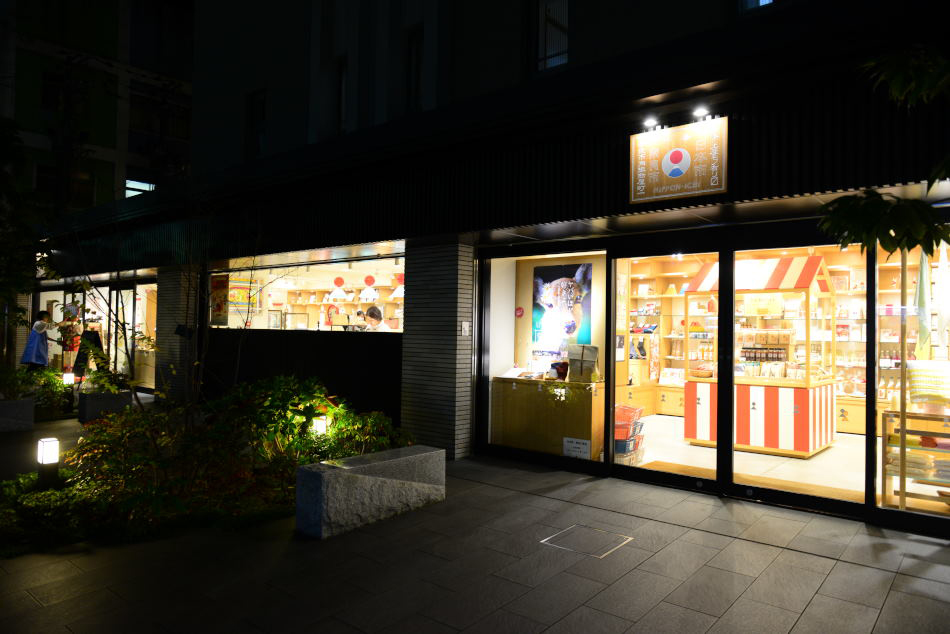 Before we left Nara, we also stopped by Nipponichi (日本市) at Sanjo Dori.  Nipponichi is also a brand from Nakagawa Masashichi Shoten focused on selling Japanese made souvenirs.