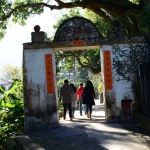 Prior to the opening of Tsing Ma Bridge in 1997 and the MTR Lantau Line in 1998, the busy ferry pier of Mui Wo (梅窩) was one of the only two gateways to Lantau Island (大嶼山) from the city centre.  Before the establishment of Disneyland, Tian Tan Buddha, and Ngong Ping tourist area on the island, the resort hotels and bike rental shops at Mui Wo’s Silvermine Beach (銀礦灣) offered one of the island’s most popular getaway experience during weekends.  Those days were long gone.  Today, the MTR brings most Lantau visitors to the new town of Tung Chung (東涌).  In comparison, Mui Wo is much more laid back and sparsely populated.  In fact, for hundreds of years Mui Wo had always been an isolated rural area until 1950 when the pier was established, receiving first boats from Cheung Chau (長洲) and then soon from Central (中環).  Today, Mui Wo has returned to its peaceful old self, and its charm lies exactly in its sleepy ambience.

Sandwiched between the foot of Sunset Peak (大東山) to the west and Silvermine Beach to the east, the area of Mui Wo hosts half a dozen or so rural villages.  Near the village of Pak Ngan Heung (白銀鄉), or White Silver Country, few tourists would venture this far inland from the beach and pier to visit the Silvermine Waterfalls and the nearby Silvermine Cave, where silver mining operated briefly from 1886 to 1898.  South of Mui Wo, a narrow seaside trail connects to another sleep rural area at Chi Ma Wan (芝麻灣).  A short hike westwards from Chi Ma Wan would take visitors to the popular beach of Pui O (貝澳), where visitors of all ages come and dig into the wet sand in search of edible clams.  Seeing bucket after bucket of clams have been taken in one Saturday afternoon made me wonder if there would be any left for the next weekend.

From Mui Wo town centre, a footbridge leads visitors into the farming villages at the foot of Sunset Peak.  A small shrine dedicated to Guan Yin, the Goddess of Mercy, is set up right by the bridge. 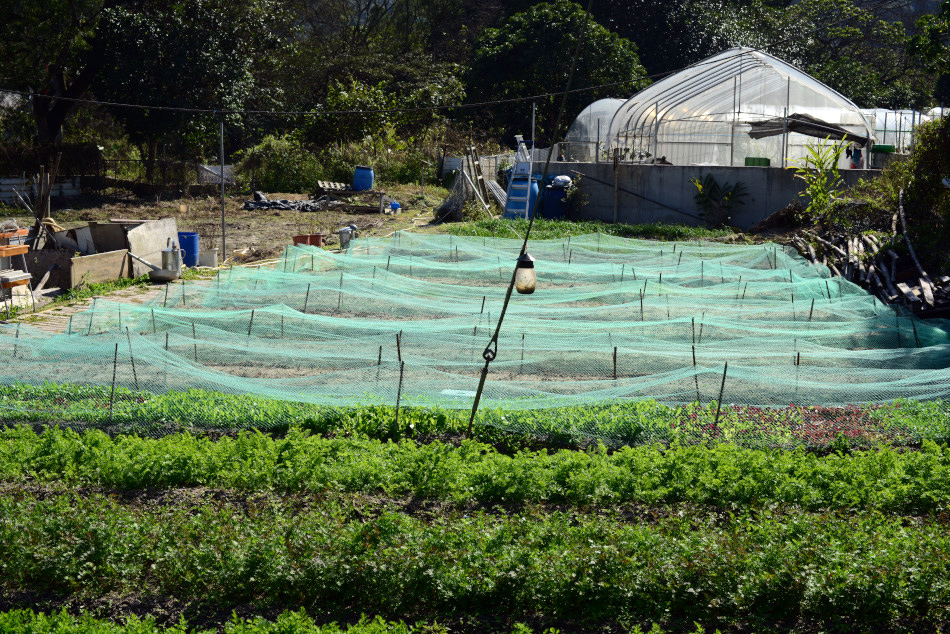 Organic farming in Mui Wo have been gaining popularity in recent years.

Many farms in the area, like this one in Luk Tei Tong (鹿地塘), are small in scale and offer prearranged interpretative tours or family activities. 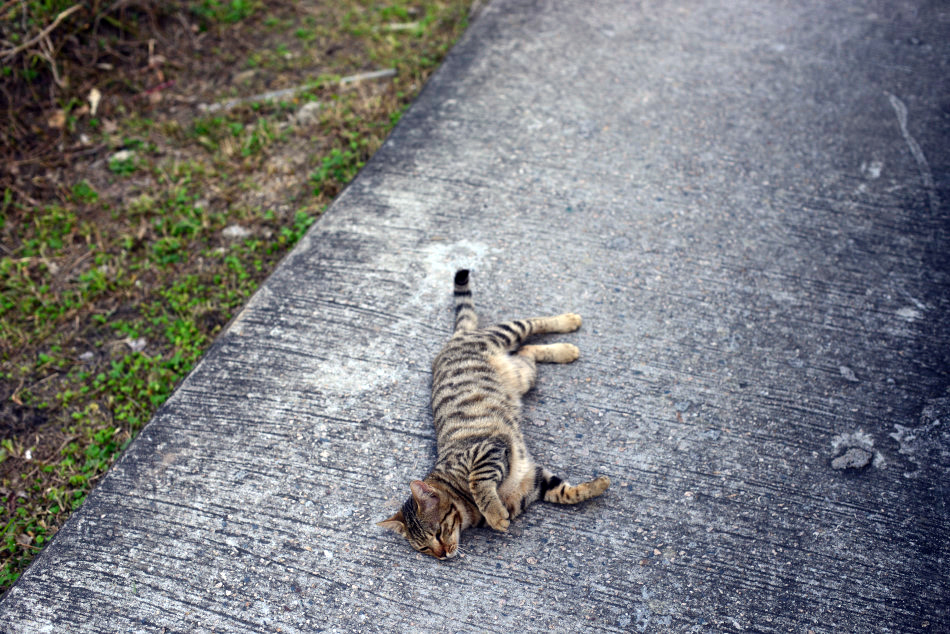 On our way into Luk Tei Tong (鹿地塘), a small cat greeted us at the village’s entrance.

Another delightful feature at the path leading to Luk Tei Tong (鹿地塘) was a row of vivid flags. 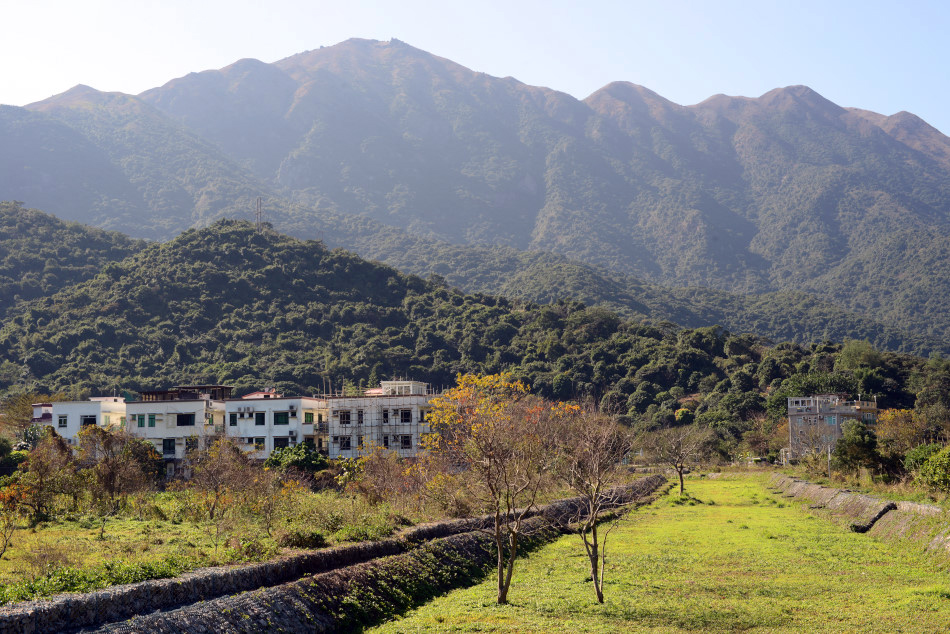 Back against the lush green slope of Sunset Peak (大東山), Luk Tei Tong (鹿地塘) is a quiet farming village with a dramatic setting. 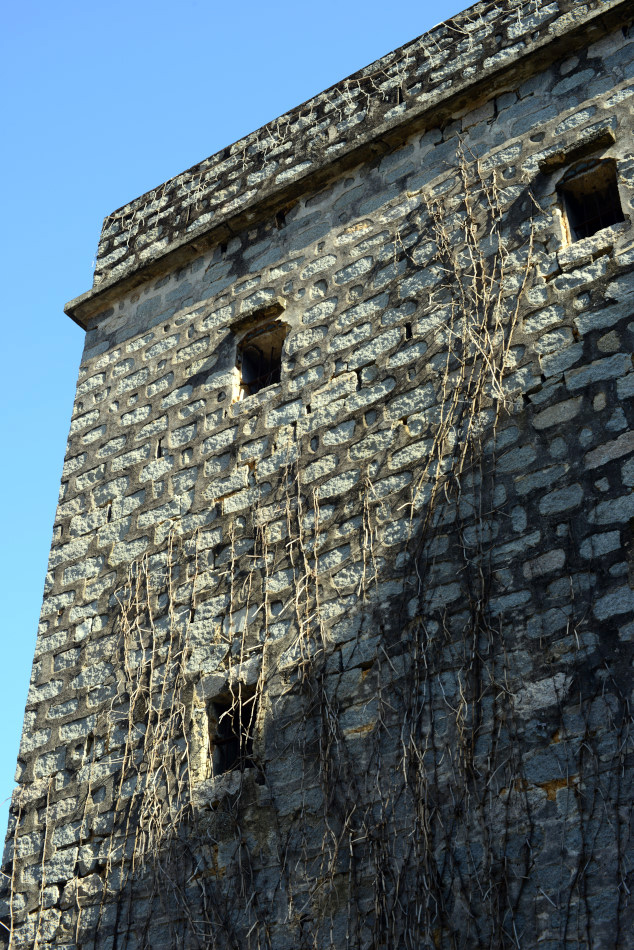 Originally there were six guard towers in the area of Mui Wo.  Today only two remain intact and standing.  Built in the early 1940’s, the Luk Tei Tong Guard Tower (鹿地塘更樓) is one of them.  In the old days, these guard towers were used to defend against pirates.

Chinese New Year has just past.  Celebratory banners still remain on the doors and walls of village homes.

Despite prohibited by law, the loud noise of firecrackers can still be heard in some rural areas in Hong Kong during the Chinese New Year. 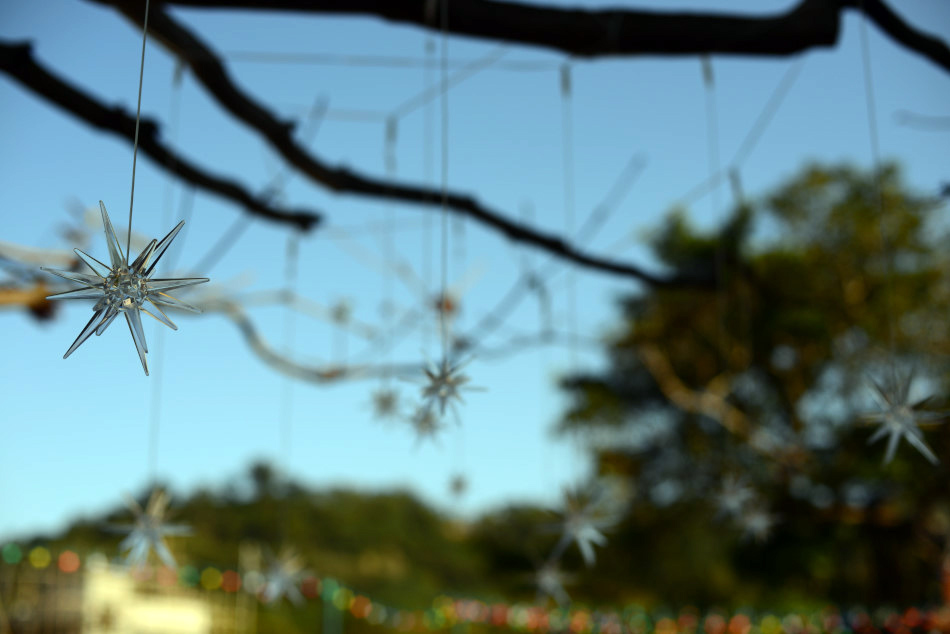 Other than traditional firecrackers, modern ornaments and lights are also used to decorate the small courtyard in front of a ancestral hall in Luk Tei Tong (鹿地塘). 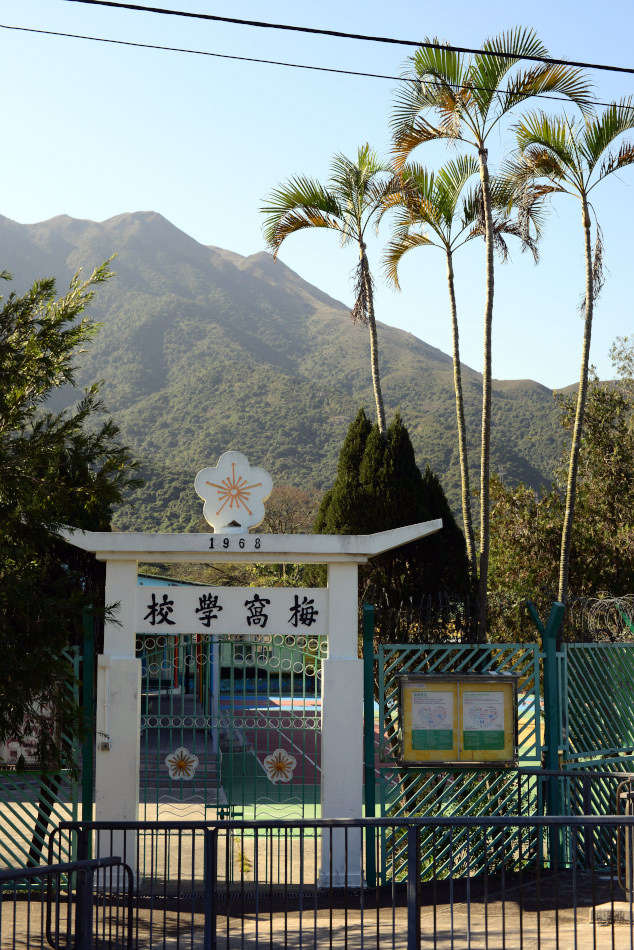 Continued north from Tai Tei Tong (大地塘) would lead to Pak Ngan Heung (白銀鄉), or White Silver Country, the village close to the former silver mine.

The once busy Silvermine Bay Beach has became relatively quiet as visitors to Mui Wo declined significantly after the opening of Tsing Ma Bridge and MTR Lantau Line. 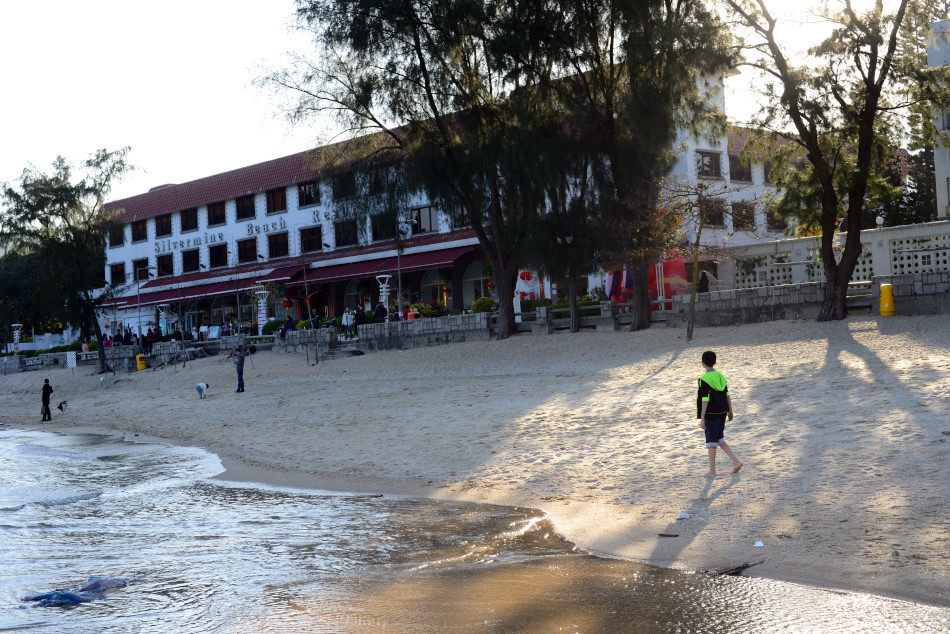 The Silvermine Bay Resort Hotel has became a collective memory for many. 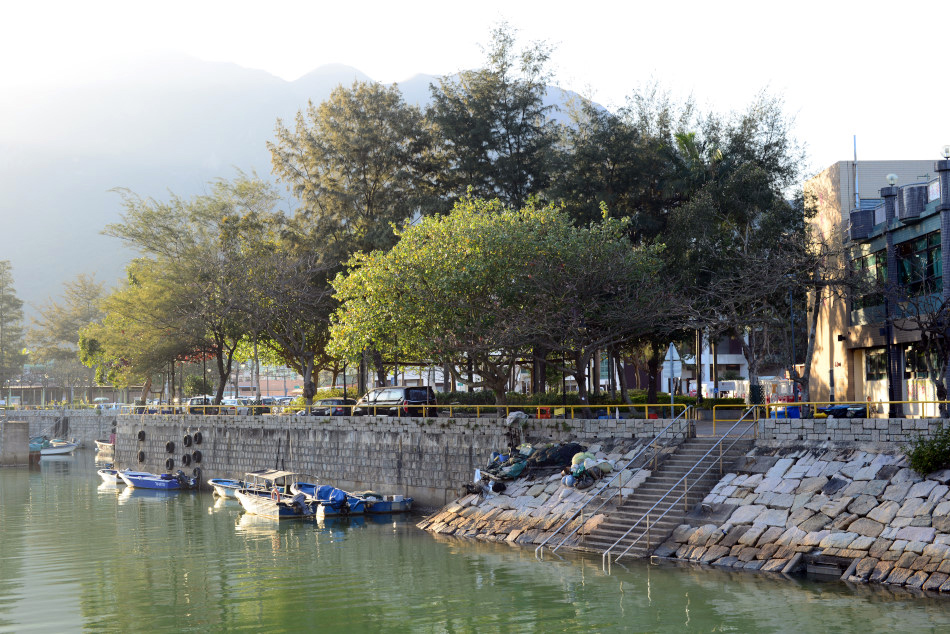 Silver River (銀河) flows through the central area of Mui Wo and enters the sea at Silvermine Bay. 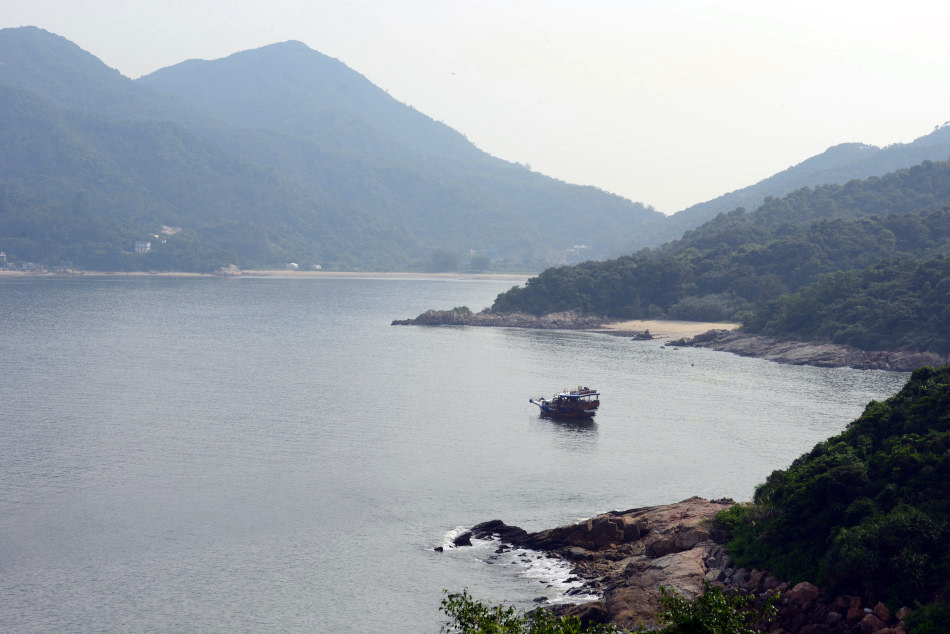 Walking along the coastal trail from Mui Wo Ferry Pier Road would bring one to Chi Ma Wan (芝麻灣), a serene coastal area south of Mui Wo. 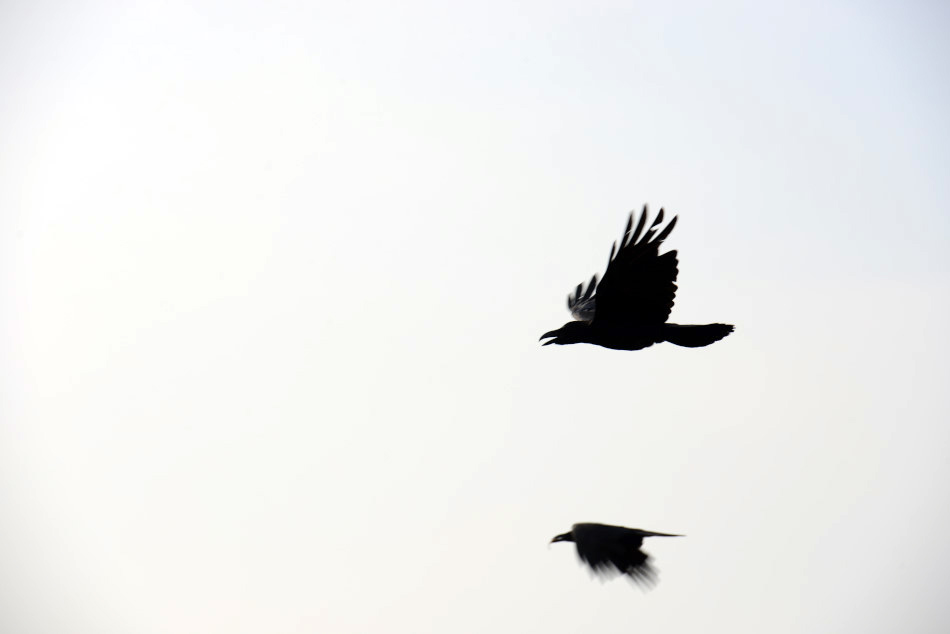 During the hike, I was the only visitor on the trail, except the flying crows. 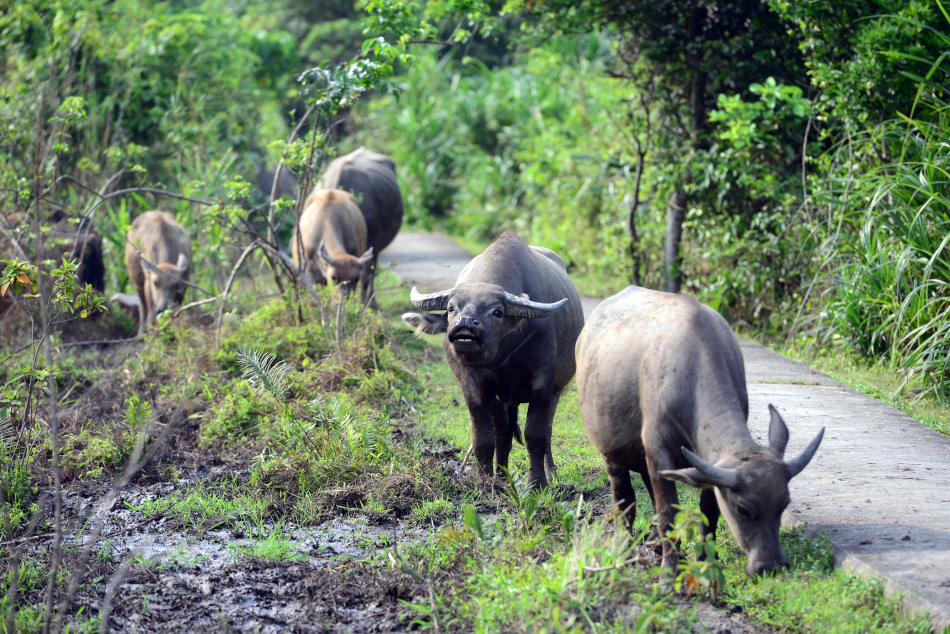 Feral buffalo is a common sight on Lantau Island.

Walking inland westwards from Chi Ma Wan, one would arrive in the old village of Shap Long(十塱) 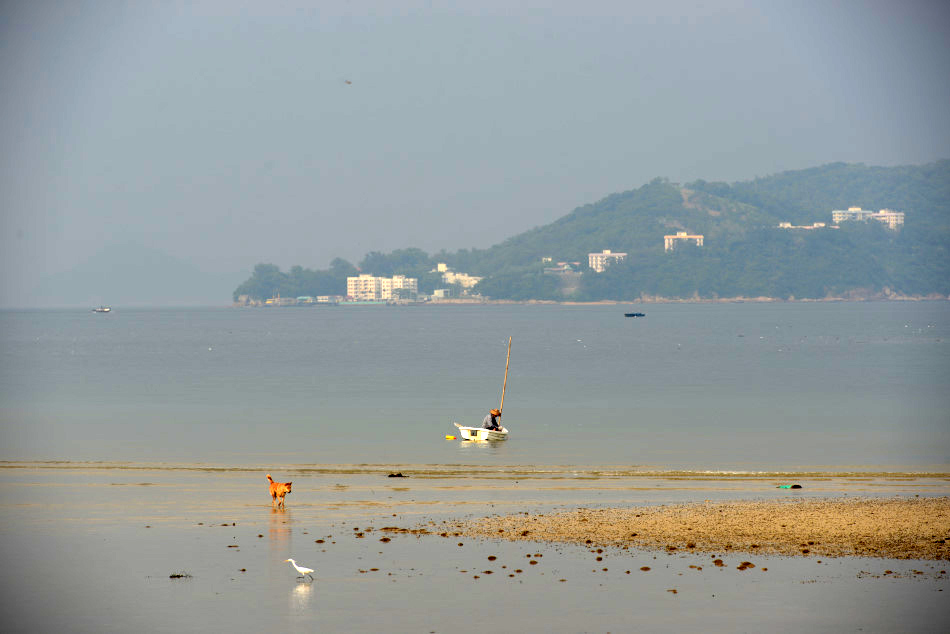 There is hardly any other visitos in Chi Ma Wan (芝麻灣)

Before reaching Pui O (貝澳), the path wind along a series of curving slopes.

At the beach of Pui O (貝澳), some enjoy swimming in the sea, while others are busy digging the sand for clams.

Pui O Beach was shaped by the water of South China Sea and the river streams.

The persistent clam diggers dig the sand of Pui O till the last twilight fades.