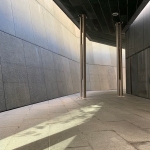 In late 1970’s and early 1980’s, the former Victoria Barracks at Admiralty have been torn down to make way for commercial developments, government buildings, and transportation infrastructure. Only a handful of the 19-century structures have been preserved and renovated with modern usage in today’s Hong Kong Park. East of the park, the abandoned Explosives Magazine Compound awaited its fate as rain forest gradually takes over the site. Two decades have passed. In 2002, the site was granted to Asia Society to establish their new home in Hong Kong. Founded in 1956 by John D. Rockefeller III in New York, Asia Society is an organization that promotes cultural exchange between Asia and the United States. In 1990, Asia Society arrived in Hong Kong to establish its Hong Kong Centre. After granted the site of the former Explosives Magazine Compound, Architects Tod Williams and Billie Tsien were chosen to oversee the design and transformation of the site, erecting new structures and converting four former weapon production and storage buildings into one of the most fascinating cultural venues in the city.

As the New York based architects described, the 1.3 hectares site was overgrown with banyan trees and lush green vegetation despite its central location adjacent to the British consulate and Pacific Place Shopping Centre. In 2012, after a decade of construction work, Asia Society’s 65,000 s.f. new home was opened to the public. Seen as one of Hong Kong’s most successful adaptive reuse and heritage conservation project in recent years, Asia Society regularly host talks and exhibitions. The complex is separated by a nullah into two parts. Where the former explosive magazine buildings are located, the upper site houses a gallery, offices, and theatre. The lower site is occupied by a visitor centre, multi-function hall, gift shop, restaurant, and offices. Connecting the upper and lower sites, Tod Williams and Billie Tsien designed a double decker bridge that zigzags over the sloped rain forest. The upper deck is a pleasant open walkway offering great views of the adjacent commercial district. Combined with the roof of the visitor centre, the open walkway also serves as a sculpture garden.

The signature quartz sandstone of Petra provides the basis for every single monuments and structures in the ancient city.  The entire city was built by carving into the various sandstones of the region, mainly from the Ordovician (the pale grey and white Disi Sandstone) and Cambrian era (the pale white to red Umm Ishrine Sandstone).  These types of sandstone are common throughout Jordan, but mostly remain underground.  Due to geological activities, these colourful sandstone are being exposed at Petra, Wadi Rum and Dana.  The rhythmic deposition of sand and minerals 540 million years ago have brought us the stunning patterns of the Petra rocks. Likely the carving and excavating properties of Petra’s stone was one of the reasons why the nomadic Nabataeans in the Arabian Desert decided to stay and build their capital city at this location.  The other main reason, perhaps the most crucial one, was the site’s potential to secure water from the surrounding mountains, where winter flash floods would occur after heavy rain.  Today, apart from the majestic Treasury, Monastery and Royal Tombs, most visitors would hardly notice the water channels, underground cisterns, particle settling pools, and mountain reservoirs that once served as the essential infrastructure for the survival of ancient Petra.

Apart from its suitability for carving, the rocks of Petra are just simply pleasing to the eye.

Wind and water have played their parts in shaping the rocks in Petra.

But it was the sand deposits and distribution of minerals such as iron and manganese oxides that gave the unique colours to the Petra rocks.

The interesting rock patterns appear in tombs and on building facades.

The colours look brilliant under the right lighting.

The colour ranges from red to orange to brown. 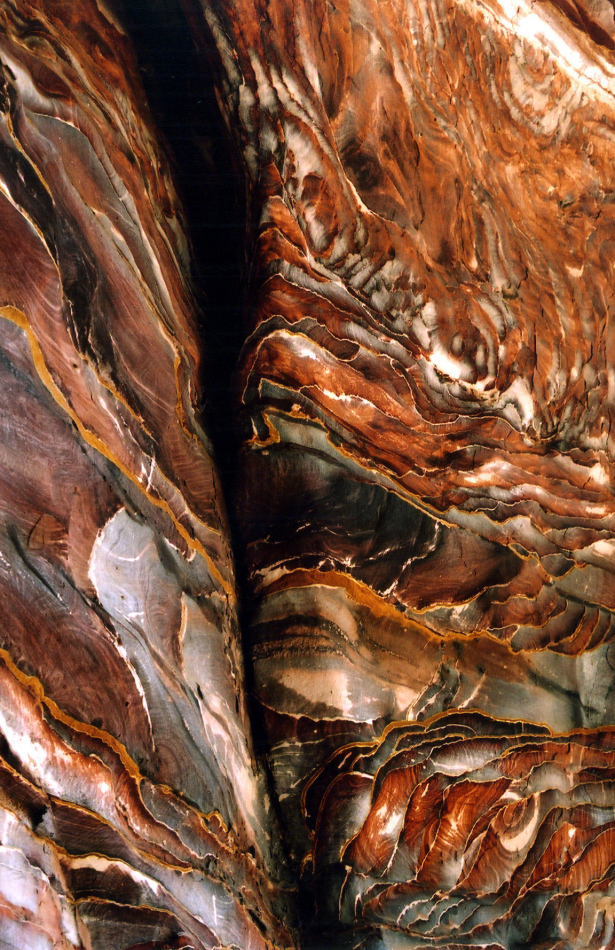 Some patterns get really complicated.

Some repetitive rock patterns look like a Futurist painting. 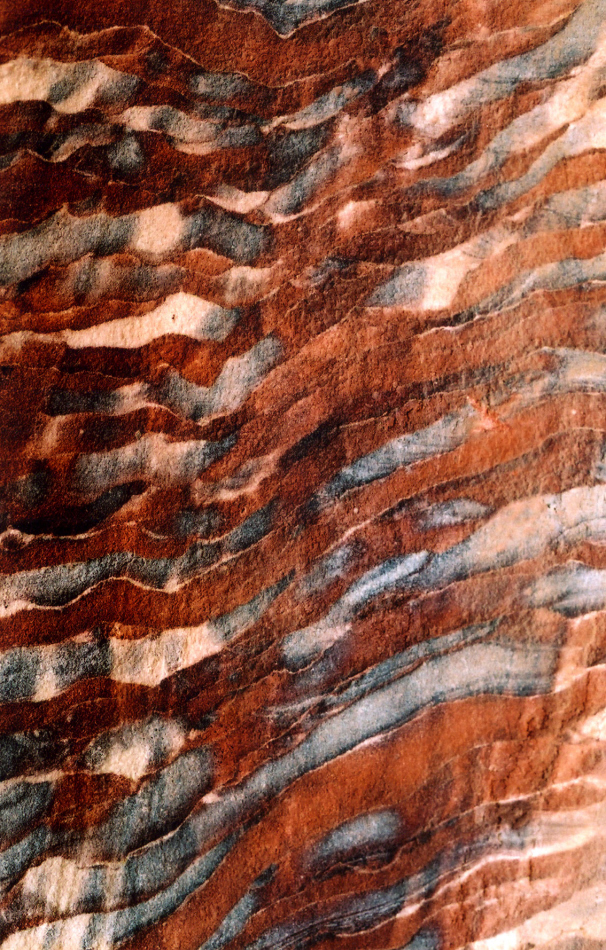 I spent quite a bit of film (still negative film and positive slides back in 2006) photographing the stone of Petra. 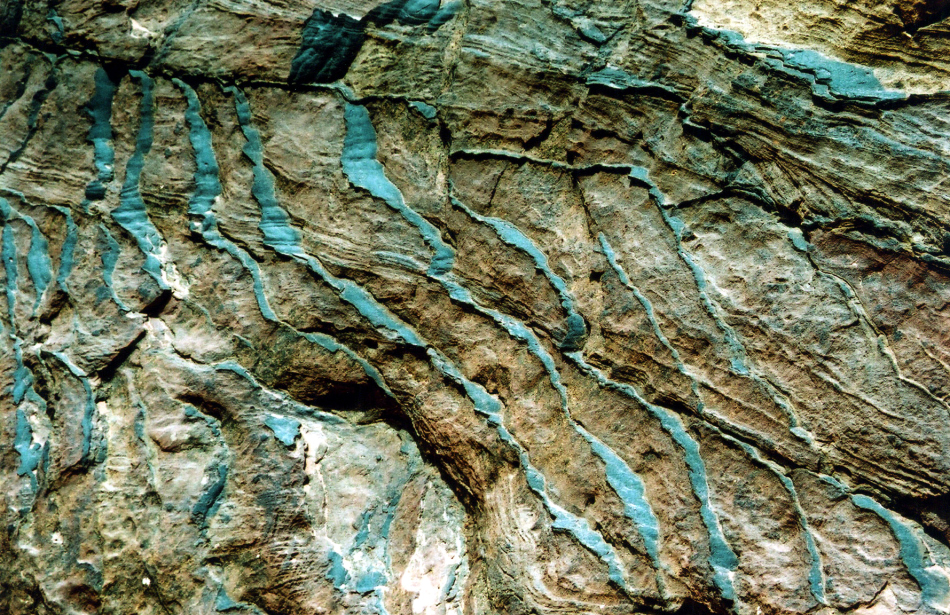 Not all stone is red and orange.

Zooming into the rocks.

After settling ourselves from a terrifying incident with a stray dog near our hotel in early morning, we were ready to venture out again in Jodhpur for a few more hours before our hired car came pick us up to move on to Jaisalmer.  Similar to our visit of Mehrangarh Fort the day before, our tuk tuk took us into the winding lanes north of Pal Haveli and climbed uphill until reaching a bronze equestrian statue of Rao Jodha, the founder of Jodhpur in the 15th century.  We soon reached our first destination of the day, the magnificent marble monument of Jaswant Thada.  Built in 1899 by Maharaja Sardar Singh, the Jaswant Thada is a cenotaph for Maharaja Jaswant Singh II and the cremation ground for the Marwar royal family.

Standing adjacent to the Deity Pond in Rao Jodha Desert Rock Park, Jaswant Thada is surrounded by the arid landscape of Jodhpur.

From the parking lot, we entered into a garden right by Deity Pond.  A short flight of steps led us to the main garden terrace.

At the main garden terrace, the first thing we encountered was a beautiful gazebo.

As a delightful example of 19th century Rajasthani temple architecture, the Jaswant Thada is beautiful in many ways, from the finest ornaments to the overall architectural proportion.  The row of chhatri (folly domes) on the roof signifies the wealth and status of the royal family. 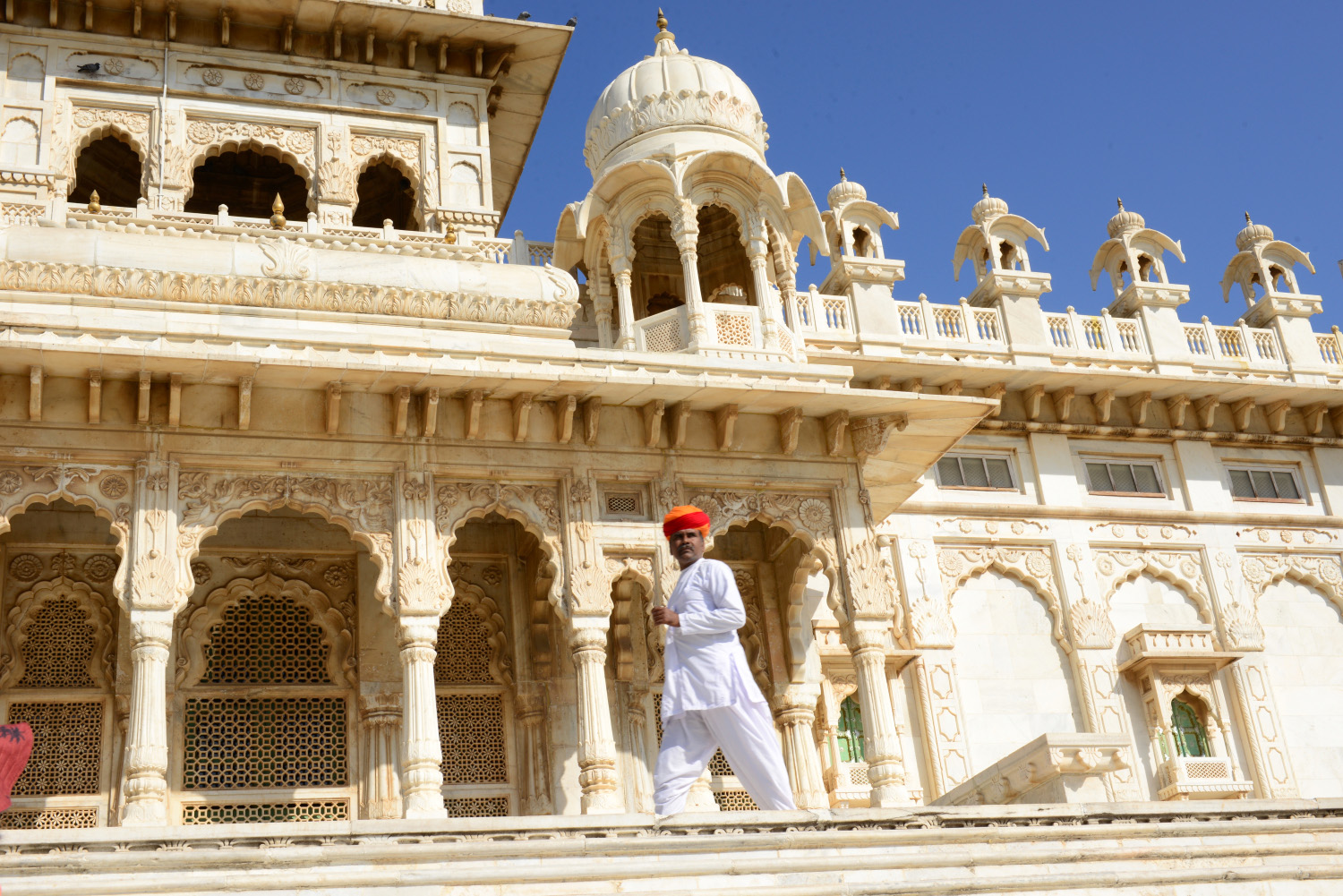 The mausoleum presents the splendid marble carving, especially the jali work (lattice) of the Indian craftsmen. 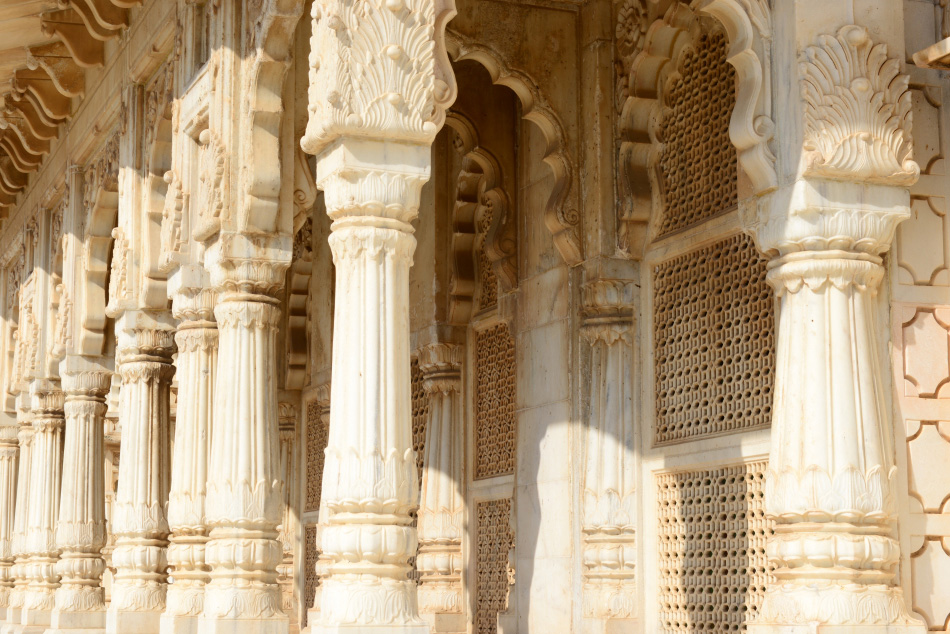 Before entering the building, we took our time to examine the beautiful craftsmanship of the stonework and jali (lattice). 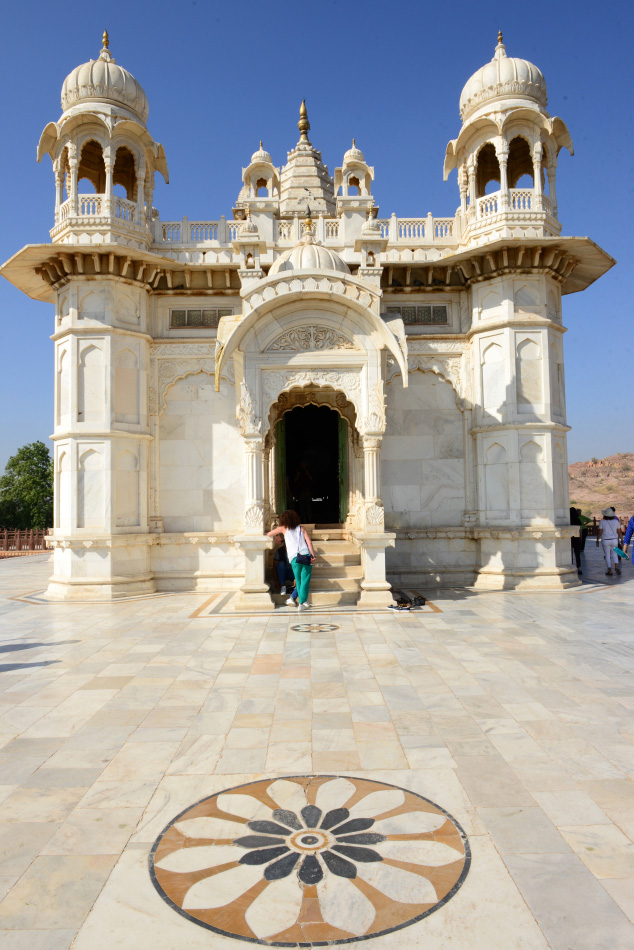 Visitors can enter the cenotaph through a side door.

No shoes are allowed in the cenotaph. 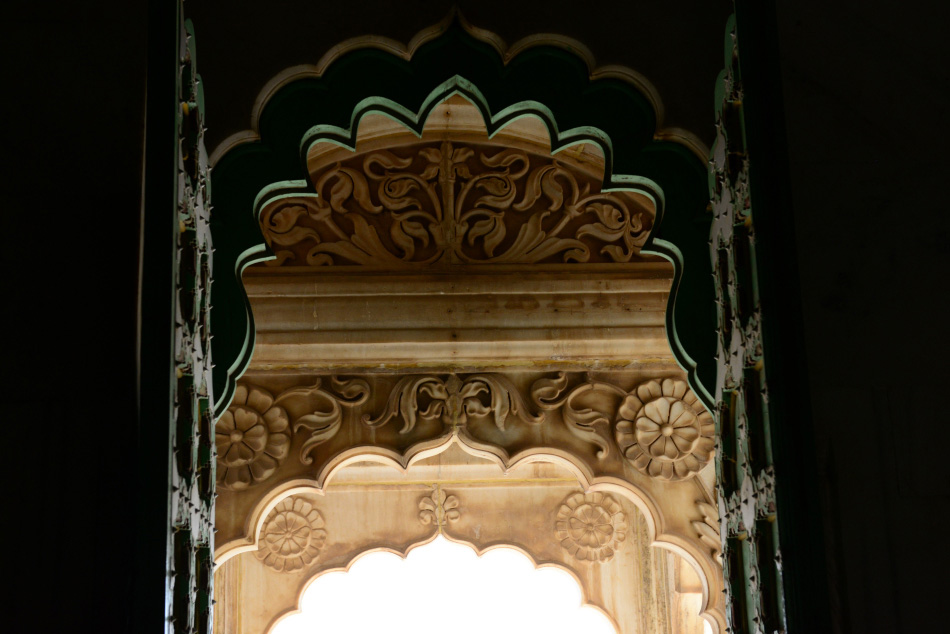 We were greatly attracted by the layers of marble carving.

The interior featured photos and illustrations of the Marwar rulers, and memorial altar for Maharaja Jaswant Singh II.

We loved the fine jali work (stone lattice), which looked like paper art made by laser cutting. 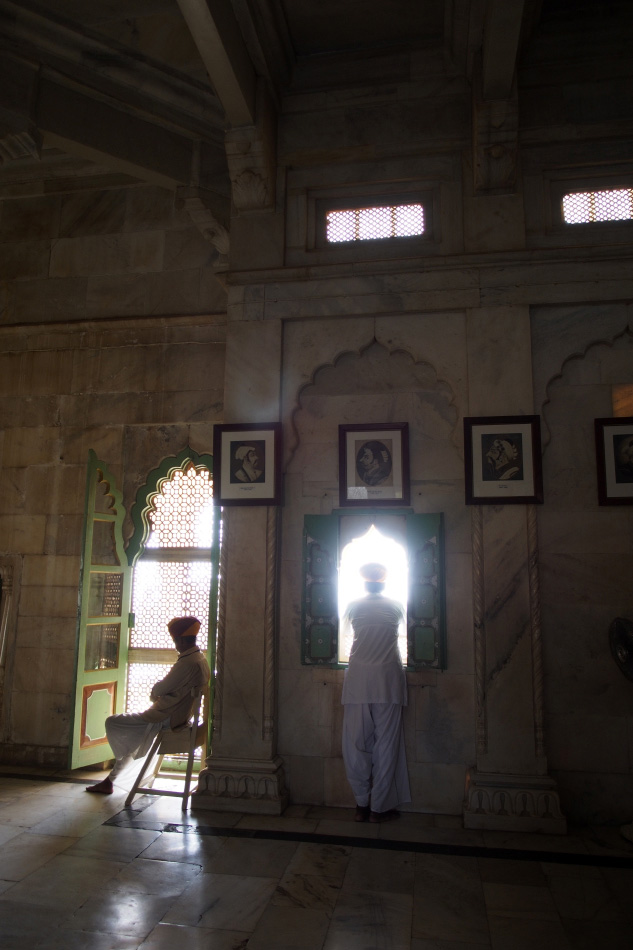 Natural light entered the building through the beautiful jali, providing a soft lighting effect for the interior.

Sunlight penetrated through the thin pieces of marble, creating an illumination effect on certain parts of the wall.

A vivid green is applied to the wooden doors and windows, creating a beautiful contrast to the colour palette of the architecture. 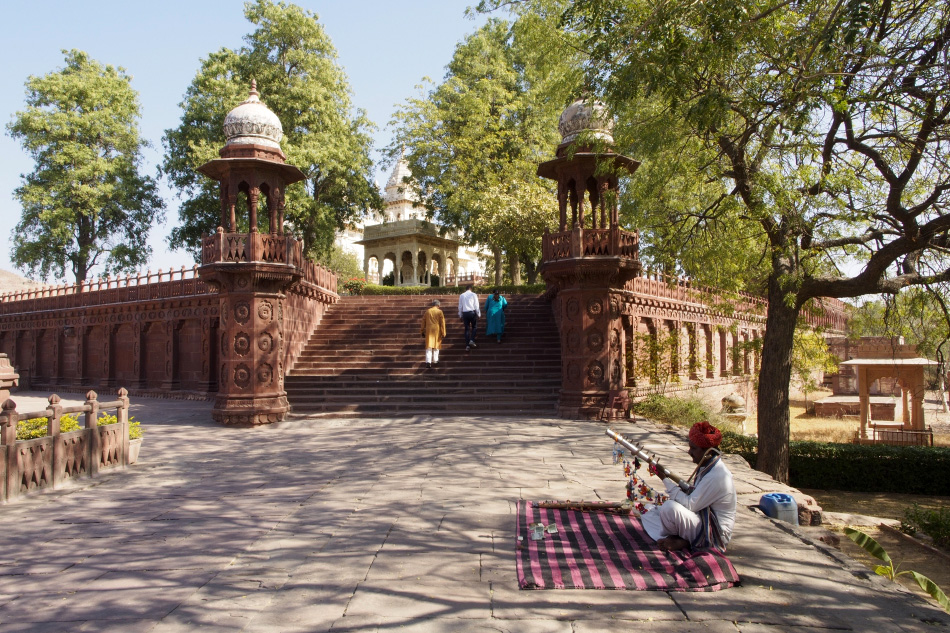 On our way back to the parking lot, we passed by a traditional musician once again.

We stopped for a few minutes to admire the Rajasthani folk music before heading back to the parking lot.

From the parking lot of Jaswant Thada, we had a final overview of the majestic Mehrangarh Fort.