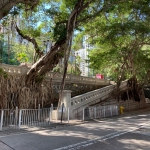 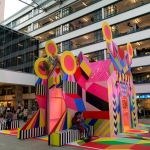 Between Sheung Wan and Central lies a tranquil stepped alleyway known as Shing Wong Street (城皇街). In Chinese tradition, “Shing Wong” is the guardian deity of city wall, or in a broader sense, the patron saint of the neighbourhood. Shing Wong Street reminds us that there was once a Shing Wong Temple (城皇廟) stood at the site bounded by Shing Wong Street (城皇街), Staunton Street (士丹頓街), Aberdeen Street (鴨巴甸街), and Hollywood Road (荷李活道), a relatively large plot of land in the old Victoria City. Probably built in 1843 or earlier, some consider the former Shing Wong Temple the oldest temple in colonial Hong Kong. Its importance was soon overtaken by Man Mo Temple (文武廟) further down Hollywood Road. In 1870’s, Shing Wong Temple was temporarily converted into a mental health asylum. And then in the 1880’s the government bought the temple and redeveloped it into the new campus of Central School (中央書院), the city’s first upper primary and secondary school to provide modern education. The school was later renamed as Victoria College (維多利亞書院) in 1889 and later the Queen’s College (皇仁書院). Merchant tycoon Sir Robert Ho Tung, and Sun Yatsen, the Father of Modern China were some of the well known graduates from the college’s early years. The Neo-Classical college building was one of the most expensive construction projects in 19th century Hong Kong.

For half a century the splendid Queen’s College building stood proudly in Upper Sheung Wan, until 1941 when the school was forced to close down due to WWII. The building suffered devastating destruction during the war and became nothing more than ruins and rubble when the city was liberated from Japanese occupation. In 1948, the ruins were cleared to make way for a new era. In 1951, a functionalist building was erected for a completely different purpose: residential compound for the police force. Sitting on four levels of platforms, the Police Married Quarters offered about 170 dwelling units. The functionalist compound served its intended purpose for another half a century, until the last residents moved out in 2000. Subsequently the government rezoned the site for private residential development. The heritage site was at risk to be lost forever.

“Save the Trees” was the first slogan local resident Katty Law put up in 2005 to protest against the felling of the Hollywood Road “stone wall trees” of the Police Married Quarters. Among a few other residents from the local neighborhood, Law found a NGO known as Central and Western Concern Group (中西區關注組). The neighborhood group successfully persuaded the government to consider removing the site from residential redevelopment and engaging in archaeological examination of the site. The government agreed to study the site. This eventually led to discovering the historical foundation of the former Queen’s College. In 2009, the government finally announced preserving the former Police Married Quarters and revitalizing it into a hub for art and design that is known as PMQ today. In 2014, the PMQ reincarnated one more time. A glass canopy was constructed over the central court, where public events would now be held. The former residential units were retrofitted into studio spaces for selective tenants including designers, artists, galleries, fashion designers, jewellery designers, lifestyle shops, vintage stores, cultural institutions, cafes, bakeries, and restaurants. A new hub for tourists and art lovers has been reborn upon the legacies of a temple, school and police residence.