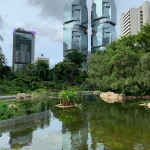 In 1890, a golden bell was installed at the main building of Wellington Barracks (威靈頓兵房), one of the three military barracks (the other two being Victoria and Murray Barracks) located between the business districts of Central (中環) and Wanchai (灣仔). The golden bell became a landmark and eventually led to the naming of the area, Kam Chung (金鐘), which literally means “golden bells”. The former naval dockyard known as Admiralty Dock gave the area its English name, Admiralty. For over 120 years, the military barracks had been a major obstruction for urban development, creating a bottleneck between Central and Wanchai. This situation remained for much of the colonial era until the late 1970’s, when the governor has finally convinced the military department to release the land. Demolition of the barracks began in late 1970’s and gave way to a series of developments that make up the present Admiralty: High Court, Government Offices, metro station, transport interchange, various commercial towers, the Asia Society complex, the luxurious retail and hotel complex known as Pacific Place, and the 8-hectare Hong Kong Park on the lower slope of Victoria Peak.

Hong Kong Park occupies much of the former Victoria Barracks (域多利兵房). During construction, a number of historical buildings were preserved, including the Flagstaff House, Cassels Block, Wavell House, and Rawlinson House. The park design respected the natural topography of the site, maintaining a naturalistic setting for all to enjoy. Opened in 1991, Hong Kong Park was an instant hit for Hong Kongers. Combining the natural context and heritage buildings with the new water features, wide range of landscape elements, amphitheatre, lookout tower, large conservatory, and Southeast Asia’s largest aviary, the park has ensured that there would always be something to suit everyone’s taste. A combined visit to the nearby Zoological and Botanical Gardens would satisfy the desire of anyone who desires for a moment of tranquility in the heart of Hong Kong’s business district.