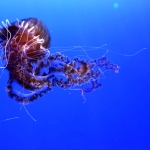 With 7.6 million admission recorded for year 2013-14, Hong Kong’s Ocean Park is considered to be the biggest theme park in Asia.  Since 1977, the Ocean Park had been attracting locals and tourists with its amazing aquariums, zoological facilities, amusement rides, shows and entertainment attractions.  With 91.5 hectares of land, the site is defined by two main areas: Waterfront and Summit, separated by the lush green hills of Nam Long Shan.

It has been 19 years since we last visited Ocean Park.  A revisit of the park after two decades was quite interesting for us.  In the old days, the park was renowned for its amusement rides, and shows of dolphins, sea lions and the orca named Miss Hoi Wai (海威小姐); today there are exotic animals and more cool amusement rides but Miss Hoi Wai was long gone.  Back then, the park served mainly the local Hong Kongers; now over half of the visitors are from mainland China.  As awareness of wildlife conservation grew in recent years, the park has also included educational interpretation for visitors.  However, as documentaries like The Cove and Blackfish which reveal the cruel reality of marine theme parks, visiting a place like the Ocean Park has become a controversial matter. There are increasing concerns over keeping wild animals in captivity while advocating wildlife conservation through its funded programs and educational interpretation throughout the park

We spent the entire day wandering around Ocean Park, first at the lower Waterfront area checking out the splendid underwater world of the Grand Aquarium and the rare mammals including giant pandas, red panda and golden snub-hosed monkey from the Chinese Province of Sichuan pavilion and the Giant Panda Adventure pavilion.  We then took a short cable car ride over Nam Long Shan to arrive at the Summit Area, where the distant scenery of Deep Water Bay and Aberdeen were equally impressive.  Up on the Summit, amusement rides and wildlife exhibitions scattered upon several platform levels.  We managed to see a number of wildlife exhibits before dusk, ranging from marine animals like jellyfish and sharks; freshwater fish like Yangtze sturgeons and Amazonian pirarucu; penguins, seals and walrus from the Arctic and Antarctic, etc.  We took the relatively new Ocean Express funicular back down to the Waterfront area, where we made a brief visit to the children friendly Whiskers Harbour and enjoyed the last moments of the Symbio, a show that featured a 360 degree water screen, lighting effects and fireworks at the Lagoon by the  park’s main entrance.

As we exited Ocean Park, we passed by the near completed MTR station.  After new features have been added in recent years, Ocean Park is soon to go through another phase of transformations: first will come the convenience of the subway station, and second the highly anticipated Tai Shue Wan Water World, projected to be completed in 2018, almost two decades since the last water park closed its doors.  Surviving through difficult economic times and competition from Hong Kong Disneyland Park, the ever-changing Ocean Park proved its resilience and ambitions.  In 2012, it received the Swedish Applause Award, a highly regarded international prize in the theme park industry.

Bathed in mysterious blue light, schools of silvery fishes swim in circles in a multi-storey glass cylindrical tank.  It is visually impressive and attracts all visitors’ attention at the Grand Aquarium designed by architect Frank Gehry. 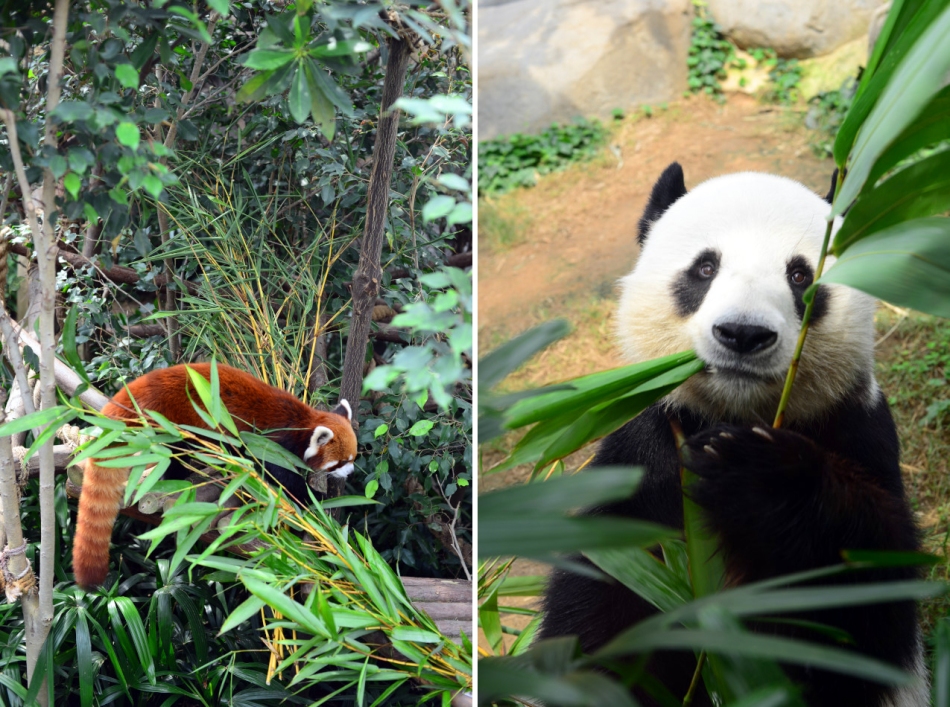 The cable car which links the Waterfront and Summit areas is an attraction by itself.  The relaxing 15 minutes ride offers spectacular views of Deep Water Bay and South China Sea. 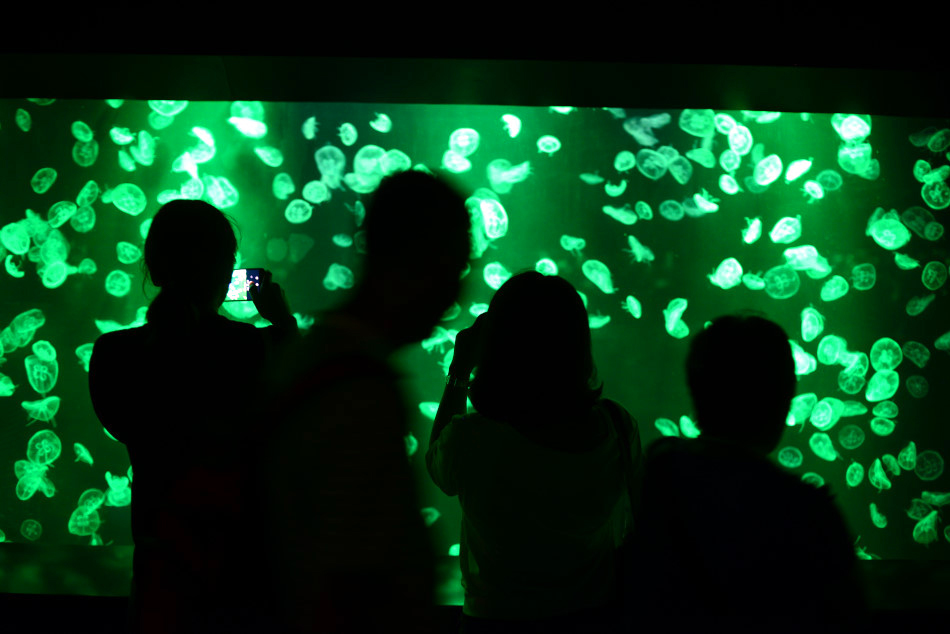 Visitors walking through the glass tunnel while a rare Chinese sturgeon swims by in front.

“I’m FINished with fins” – A smart slogan to request people to refrain from consuming shark fins.  Such education is crucial in Hong Kong where shark fin soup is still a luxurious delicacy in the banquet menu, even though there is increasing awareness among the younger generation.  Years ago documentary such as Sharkwater has already explained the devastating consequences to the marine ecosystem on earth as the result of massive demand and consumption of shark fins

Close encounter with sharks at the Shark Mystique.  Sharks are one of those animals often got misunderstood.

Amazonian pirarucu in the Rainforest Pavilion.  These giant freshwater fish can grow up to 4.5m long.

Amusement rides are popular attractions at the Summit, including the “Hair Raiser”roller-coaster.

Partial view of the Summit area.

At Pacific Pier pavilion, a curious sea lion interacts with a spectator by following the visitor’s hand motions on the other side of the glass. 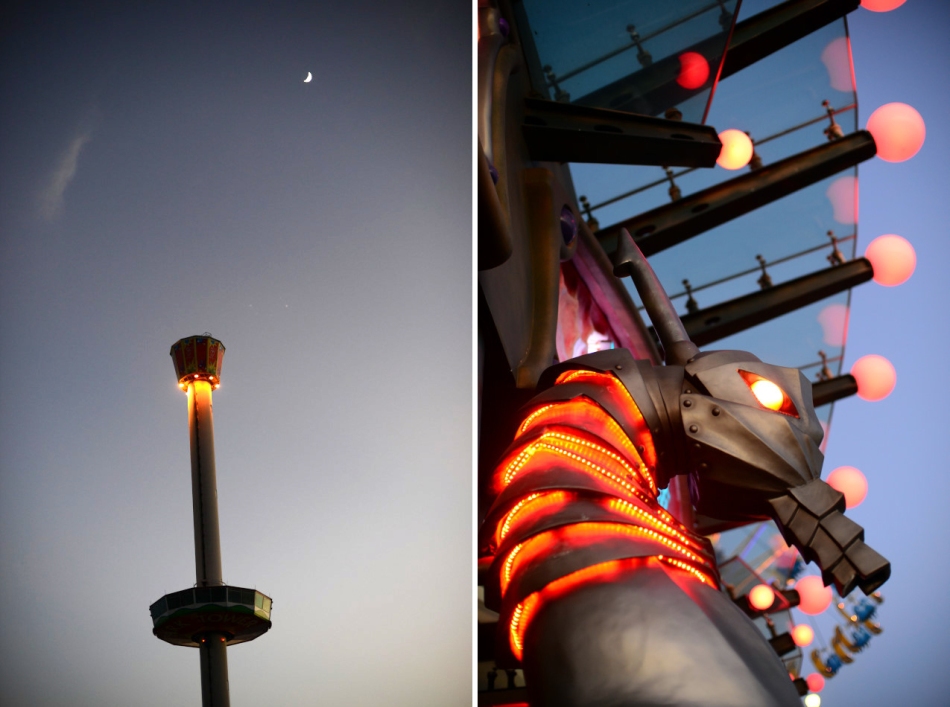 [left] a moon hanging above the Ocean Park Tower with slowly rotating viewing platform; and [right[ a seahorse decoration at the Ocean Express funicular station. 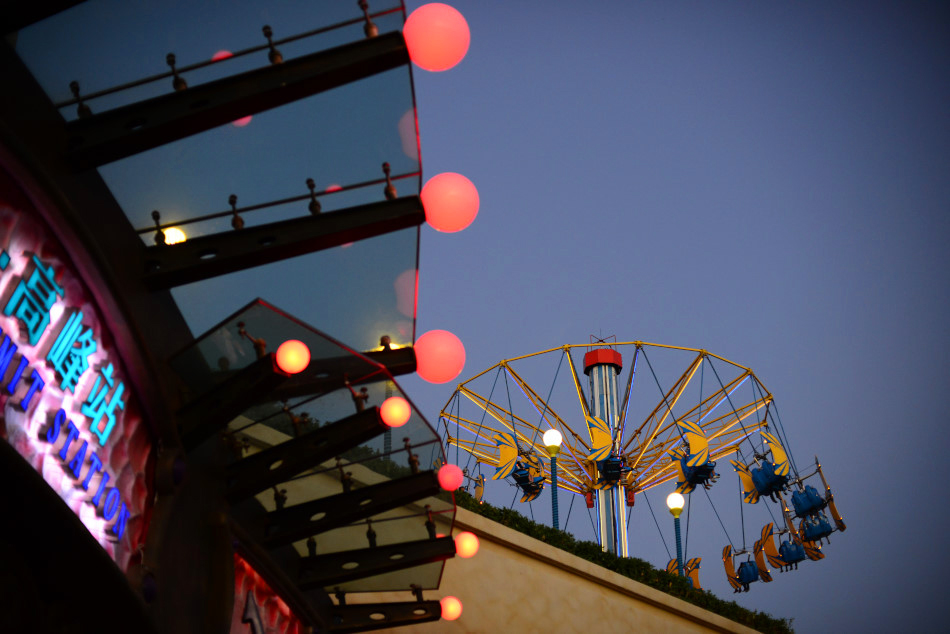 [left] Cable cars bring visitors back to the Waterfront area from the Summit area in the evening when approaching closing time; [right] the light decoration of a small ferris wheel lit up in the evening at Whiskers Harbour.

When the kids’ zone Whiskers Harbour left alone without kids.

A wooden horse of a carousel in Whiskers Harbour.

Water, fire, light and fireworks are the main components of the 360° water screen show Symbio.