At the southwest tip of Lantau Island, the Fan Lau Peninsula (分流) extends out into the Pearl River Estuary, with its northwest facing the slightly brown water of Pearl River and its southeast to South China Sea’s pristine blue.  Only accessible on foot, at this westernmost corner of Hong Kong, deserted beaches and abandoned village homes of Fan Lau reminisce some of the city’s long lost memories.  The pleasant and relatively flat 6-hour hike to Fan Lau has been on our wish list for quite some time.  Known as the Lantau Trail Section 8, the first part of the trail brought us onto a coastal trail, where open views of the South China Sea dominated the horizon, with the hazy silhouette of Lantau Peak or Fung Wong Shan (鳳凰山) behind us in a distance.  In the trail’s second part we made a detour onto the Fan Lau Peninsula to visit its various attractions.  Then we followed the Lantau Trail Section 7 north to Yi O and then Tai O, our final destination of the day.

In a sunny but hazy winter Saturday morning, we took the ferry from Central to Pui Wo of Lantau Island.  On our way to the Central Pier, we passed by Lung Wo Road where the annual Hong Kong Marathon was taking place.  After arriving at Mui Wo of Lantau Island, we boarded a local bus for Shek Pik (石壁) Reservoir to reach the trailhead.

The first half hour or so we walked along a storm-water channel right by the mountain foot.

With the day’s heavy hazy, we could only barely see the silhouette of Lantau Peak or Fung Wong Shan (鳳凰山) behind us. 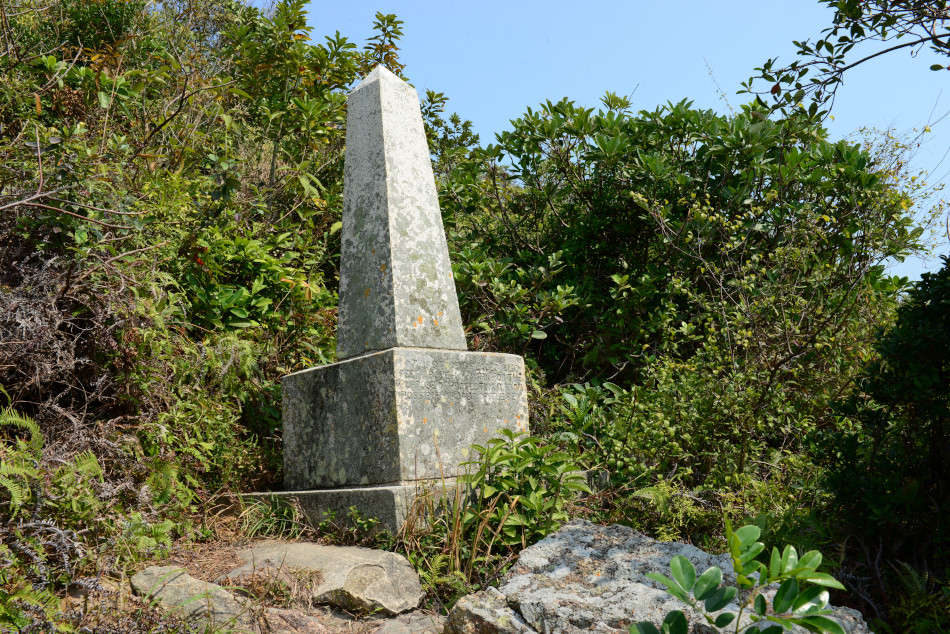 In less than an hour from trailhead, we made a short detour out to a peninsula near Kau Ling Chung (狗嶺涌) to check out the South Obelisk (嶼南界碑).  The small obelisk was erected by the British in 1902 to mark the southern boundary of Lantau Island.

The hilltop of the South Obelisk offered us a good view of the beaches of Kau Ling Chung (狗嶺涌) and Fan Lau Tung Wan (分流東灣) further afield.  We followed a path down to the campsite and beach of Kau Ling Chung, and walked further southwest towards the tip of Fan Lau Peninsula.

The coastal path up and down the peninsula took us closer to Fan Lau Tung Wan (分流東灣).

We finally reached the main beach of Fan Lau Tung Wan (分流東灣), and were delighted to find the colourful rocks on the sand.

Unfortunately, other than rocks we could also find a never-ending blanket of rubbish on the beach.

From the main beach, there was a small path that led to Chan’s Store, one of few houses in Fan Lau Village that were still occupied.  In fact, according to South China Morning Post, the owner of the store could well be the only resident left in the village.

Many houses in the area were already overtaken by vegetation.

The village was mostly desert, except for Chan’s Store.  We picked up a can of soft drink and rested for a few minutes. 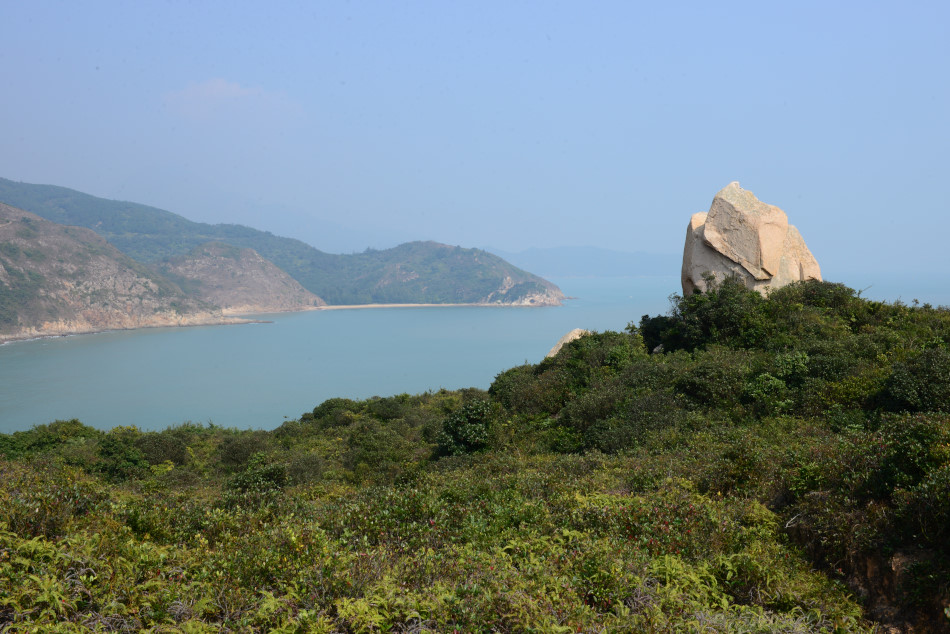 From Chan’s Store, we returned to the beach of Fan Lau Tung Wan (分流東灣).  At the end of the beach we exited the beach into a narrow uphill path.  A peculiar rock (石筍) stood atop the hill overlooking the beach, just a few minutes before we reached the remnant of the old Fan Lau Fort (分流炮台).

Built in 1729 by the Qing government, the fort was abandoned in 1898 when the British were granted the lease of the New Territories. It was originally built to defend the coastal area from pirates.

Also on the Fan Lau Peninsula was a mysterious stone circle.  Archaeologists believe that the circle was arranged for ceremonial purposes during the Neolithic and Bronze Age. 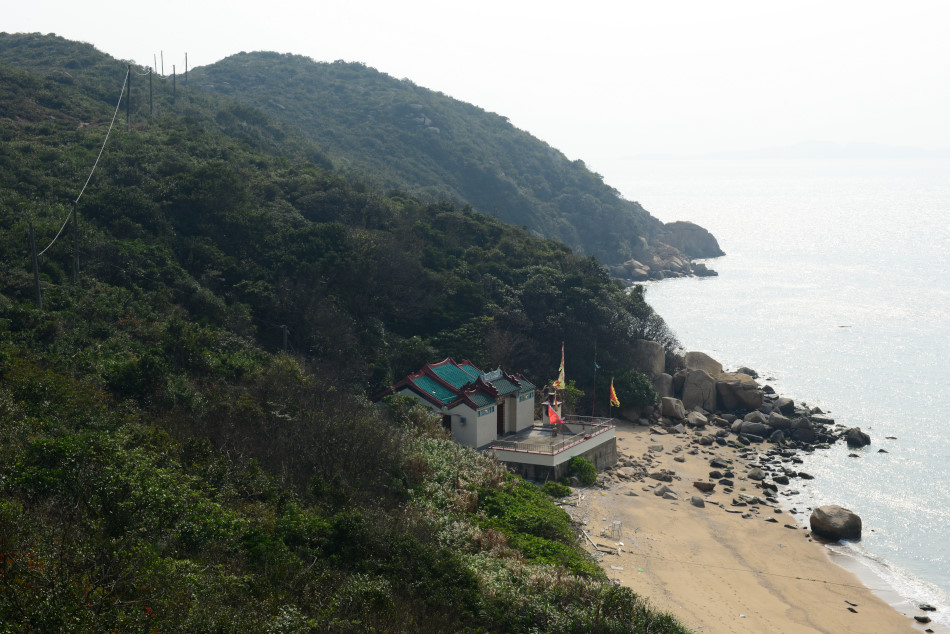 Leaving Peninsula behind, we stumbled upon a small beach called Fan Lau Miu Wan (分流廟灣), where a Tin Hau Temple was built.  The temple was probably erected in 1820.

There wasn’t anyone in the temple when we entered.  The neat altar and fresh offerings on the counter suggested the temple, though remote, was under well maintenance.

In the temple’s anteroom there was a traditional bed with slippers and shoes on display.  Maybe that chamber was some sort of representation of the home of the deity?

In another small chamber there were old stone plagues dated from late Qing Dynasty, Nationalist era, to just a few years ago.  Each plague recorded a major renovation of the temple and the names of donors (mainly from individuals and business around West Lantau.  There were also two wooden boat models on display.

After checking out the temple, we stepped back onto the Fan Lau Country Trail.  Some parts of the trail was dominated by taller-than-human silver grass.

As we left the tip of Fan Lau Peninsula behind, Fan Lau Country Trail led us back to the main path of Lantau Trail Section 7, where we once again encountered the former settlement of Fan Lau Village (分流村).

At this westernmost area of Hong Kong, Fan Lau Village once housed 200 people, but now there could be only one inhabitant left (owner of Chan’s Store).  We passed by plenty of abandoned houses in various state of crumbling.

One of the highlight in the village was the former Fan Lau School.

There was only one room in the building.  The blackboard was still on the wall.  There was a photography show by artist Lily Leung on display in the building.  Her works depicted a strong sense of nostalgia of the nearly abandoned Fan Lau. 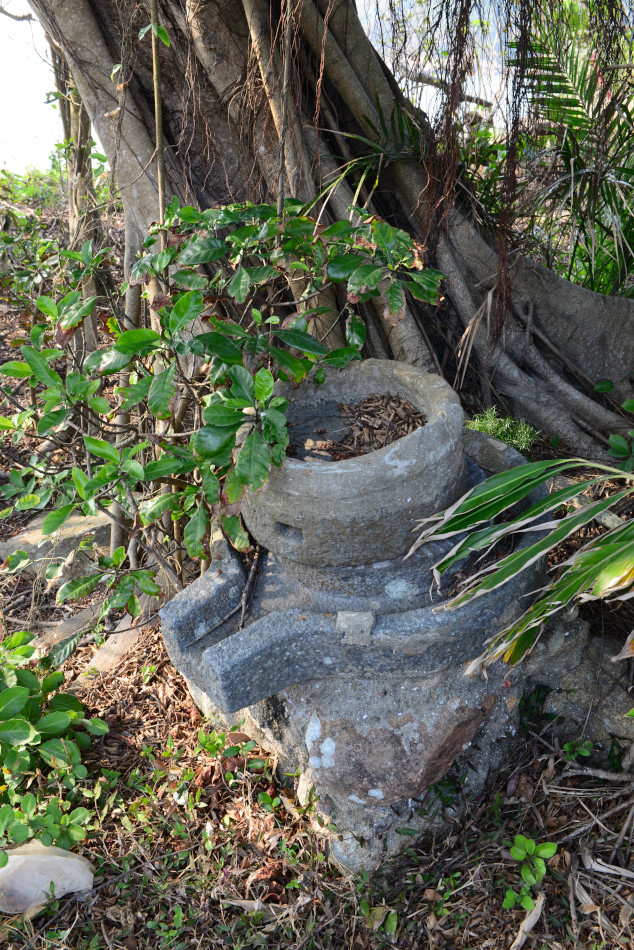 Many old utensils were left behind in the village, including a stone grinder below a banyan tree. 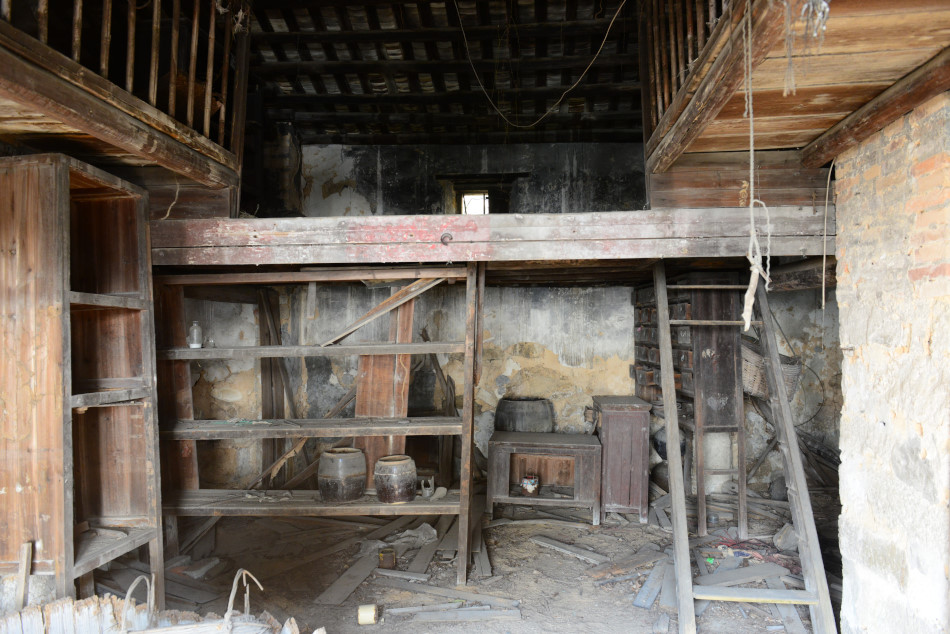 In most of the abandoned houses, there was a mezzanine floor.  Large ceramic containers were also common.

The wooden roofs of many village homes crumbled, while walls were taken over by vegetation. 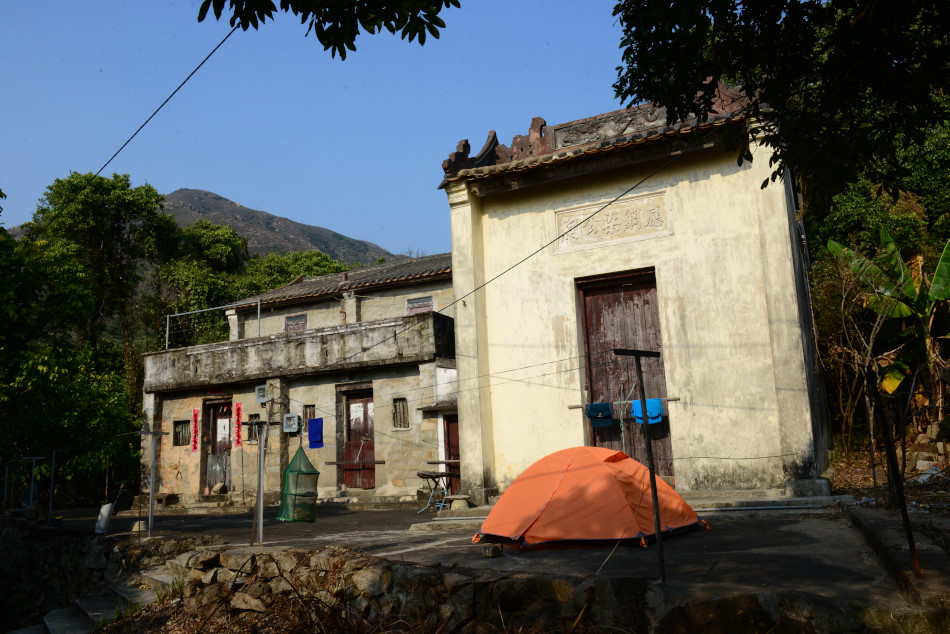 One of the most impressive building in Fan Lau Village was undoubtedly the ancestral hall.  Some travelers set up a tent right in front of the former ancestral hall. 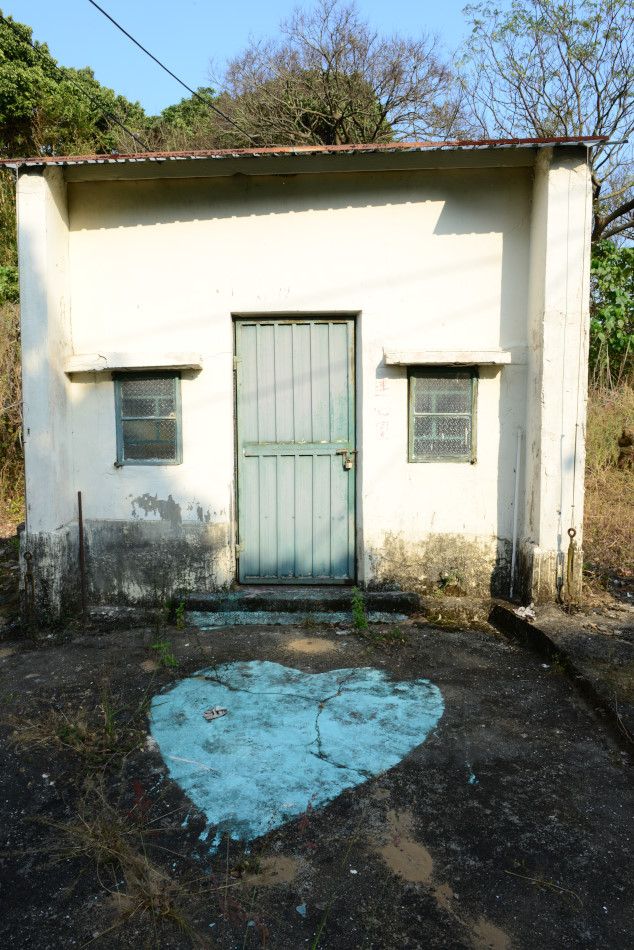 Some village houses revealed unique preferences of the former residences.

Glass details of the old windows revealed the age.  These glass windows were popular decades ago, but is now a rarity.

Before leaving Fan Lau Village, we passed by another iconic structure from the village’s heyday, a chimney structure right by the Fan Lau Sai Wan (分流西灣).  After the village, we continued on our hike on Lantau Trail Section 7 northwards to Yi O.