A DIP IN THE RED SEA & FERRY TO EGYPT, Aqaba, Jordan 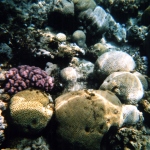 After the legendary lost city of Petra and epic desert of Wadi Rum, we finally arrived in Aqaba, Jordan’s only coastal city right by the Gulf of Aqaba at the northern end of the Red Sea. Serving as an essential port for the Middle East, Aqaba is also popular among tourists, thanks to its regular ferry services to Egypt and the world famous Red Sea coral reefs in the area. Before heading over to the land of pharaohs, we decided to spend a relaxing day in Aqaba.

In the morning, we took a shuttle bus from Crystal Hotel to the Royal Diving Centre. After paying a 10 JD entrance fee, my friend and I, who had never dived before, went for an introductory session. Then we spent the afternoon snorkeling with a disposable underwater camera. We saw some nice corals and a lot of colourful fish. We snorkeled for a few hours and returned to the diving centre. Upon leaving we tried to get the refund of the entrance fee. Their policy was that whoever diving at the centre would not require to pay the admission. The staff hesitated for a while and told us the cashier was closed for the day. We had no choice but to return the next morning. The next morning we returned to the Royal Diving Centre for our refund. The staff tried to avoid us. We expressed our discontent and at last a manager came out with a big smile and gave us the refund. Leaving the diving club behind, our hired taxi took us to the passenger ferry terminal. It took us over an hour to go through the customs and deal with the departure tax. At last we were led to board a shuttle bus that drove onto the ferry along with the passengers.

Once on board, we found the Egyptian custom officer to stamp our passports. The ferry didn’t leave the dock until way over 11:30, over two hours since we got to the terminal. At last, the ferry sailed slowly southwest towards the Sinai Peninsula in Egypt, with Saudi Arabia to our east. At around 14:30 we arrived at the Egyptian port of Nuweiba. The hectic scene of Nuweiba was our first impression on Egypt. At the minbus station we met three Australians. The six of us hired a minivan to Dahab, the popular backpacker resort at the Egyptian side of the Gulf of Aqaba.

Dahab seemed pretty quiet to us, probably because of the recent terrorist bombing a month ago on April 24th, which claimed 23 lives in total. The town looked very young and causal. At the station we met Alex, a staff from Bishibishi Garden Village, a relatively new hotel in Dahab. We met Jimmy the owner and decided to stay at one of their air conditioned triple rooms. After dinner, we strolled around Dahab, dropped by an internet cafe, and bought another disposable underwater camera for the following day.