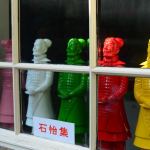 Hidden in a series of alleyways of traditional townhouses known as Shikumen (石庫門), an interesting area popular with artists and young people has become a major tourist attraction in the former French Concession of Shanghai.  Known as Tianzifang (田子坊) since artist Huang Yongyu (黃永玉) named the area after an ancient painter Tianzifang (田子方) in 2001, Tianzifang has become a vibrant location for young people and artists.  Many of the traditional Shikumen houses were restored during 2000s and converted into craft shops, cafes, bars, souvenir stores, etc.  Taken quite a distinct approach towards preservation than the nearby Xintiandi (新天地), Tianzifang maintains a relatively low-key and community feel.  Electrical cables were hanging all over, while weathered bricks and decades old windows could be commonly seen.

We spent much of the last morning of our Shanghai trip wandering in the alleyways of Tianzifang to absorb the lay-back and creative atmosphere.  We did quite a bit of window shopping.  At the end, we stopped by Cafe Dan for coffee and soba.  Owned by a Japanese, Cafe Dan is a lovely small cafe serving excellent Japanese food and great coffee from around the world.  Up a flight of narrow wooden stair, the dining area of Cafe Dan on the upper levels felt like a peaceful oasis above the bustling activities of tourists and visitors of Tianzifang.  Sitting by the wooden window screen, we had some moments of tranquility under the warm sunlight, while the aroma of our filtered coffee gradually filled the cafe interior.

We reached Tianzifang through one of these alley entrance on Taikang Road.

One of the alley gateway into Tianzifang.

Statue of the ancient painter Tianzifang from the Warring State Period (481 to 403 BC). 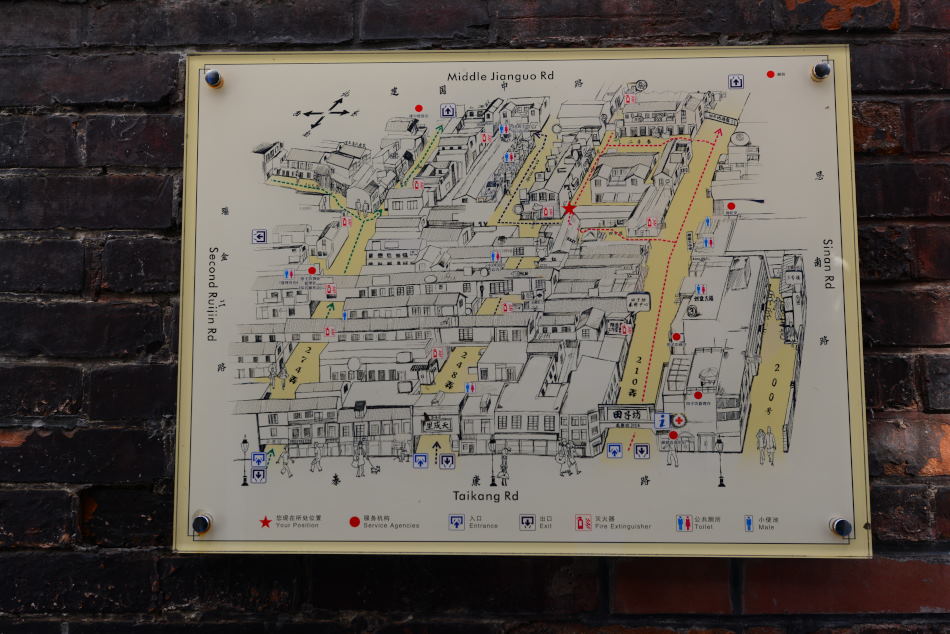 Alleyway in Tianzifang.  Some shops were at the upper level of the old houses, accessible by narrow stairway from the ground level. 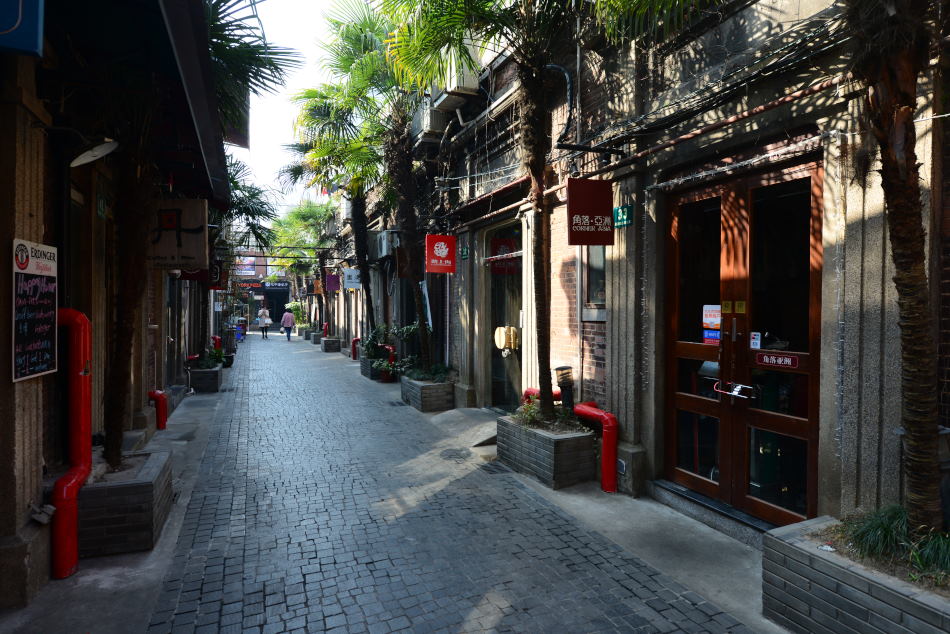 Much of the old houses in Tianzifang were transformed into cafes, restaurants and shops.

This shop is dedicated to Teddy bears. 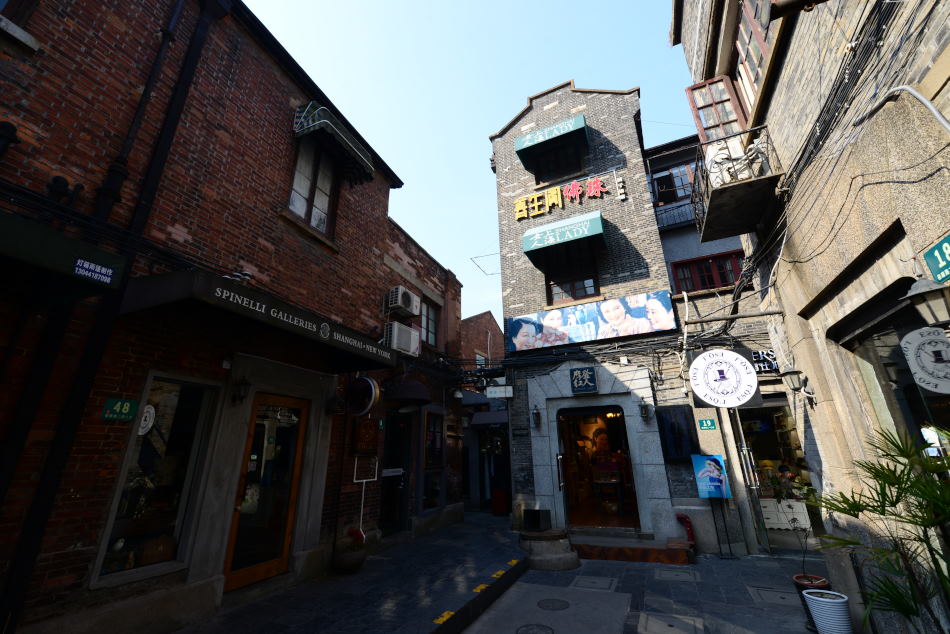 Pedestrian nodes such as a small courtyard could be found at a number of places.

Colourful or kitsch souvenirs selling the Chinese culture could be found all over. 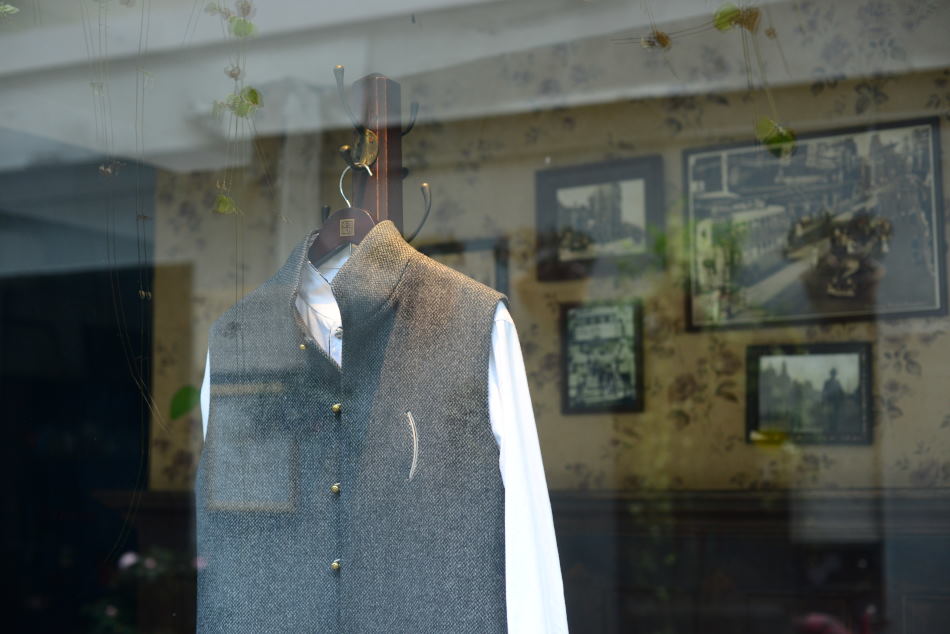 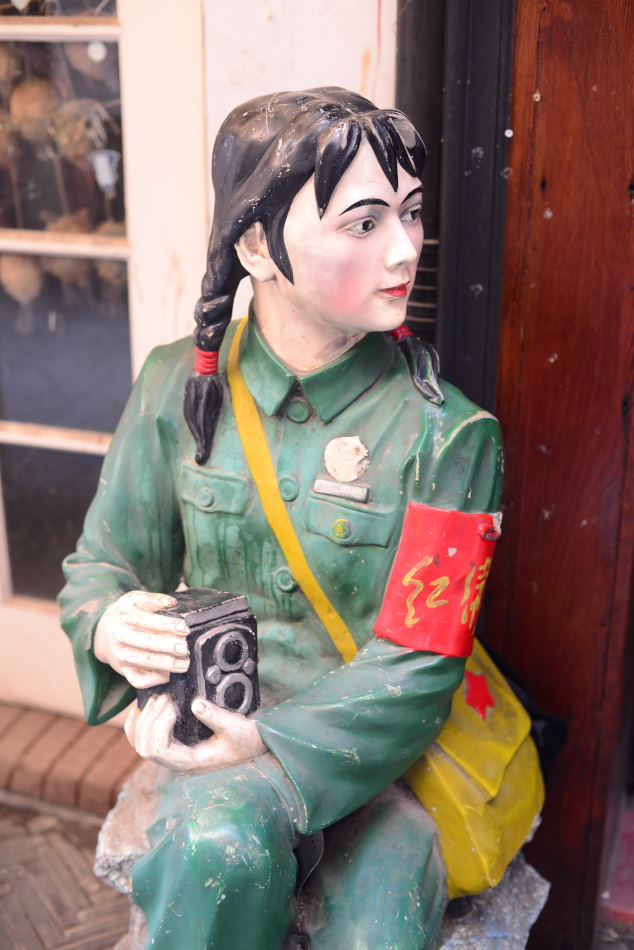 Statue dressed like a red army during the Cultural Revolution in front of a second-hand camera shop.

Interesting murals contribute to the community feel of Tianzifang.

Alleyway in front of Cafe Dan.

Interior of the upper level of Cafe Dan. 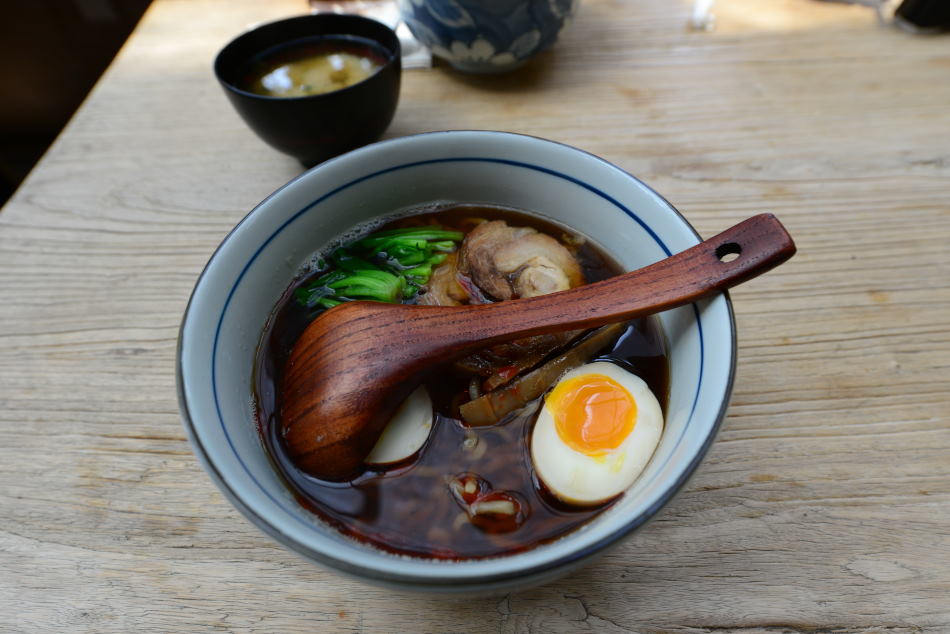 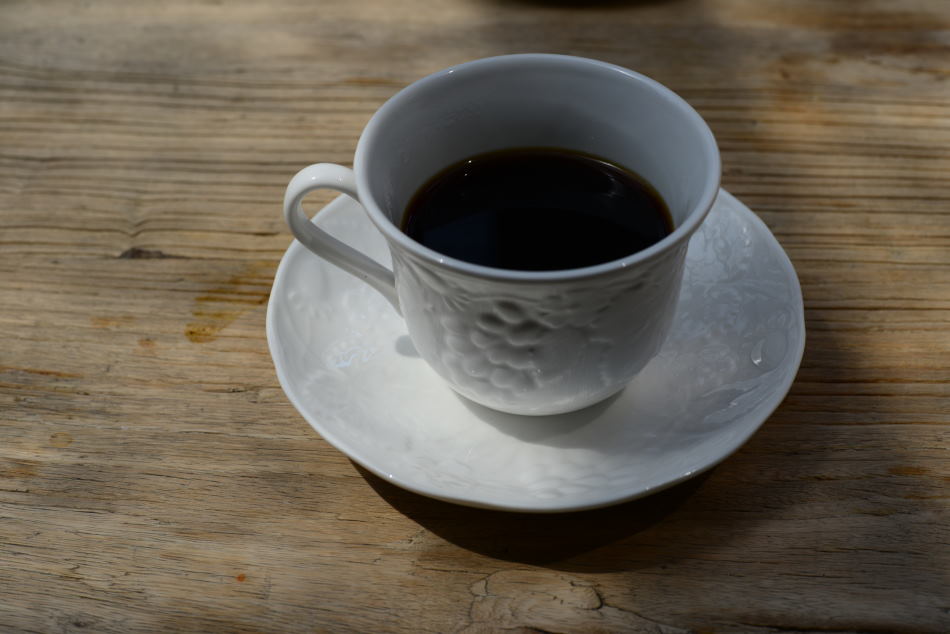 My cup of coffee was brewed with beans from the Galapagos. 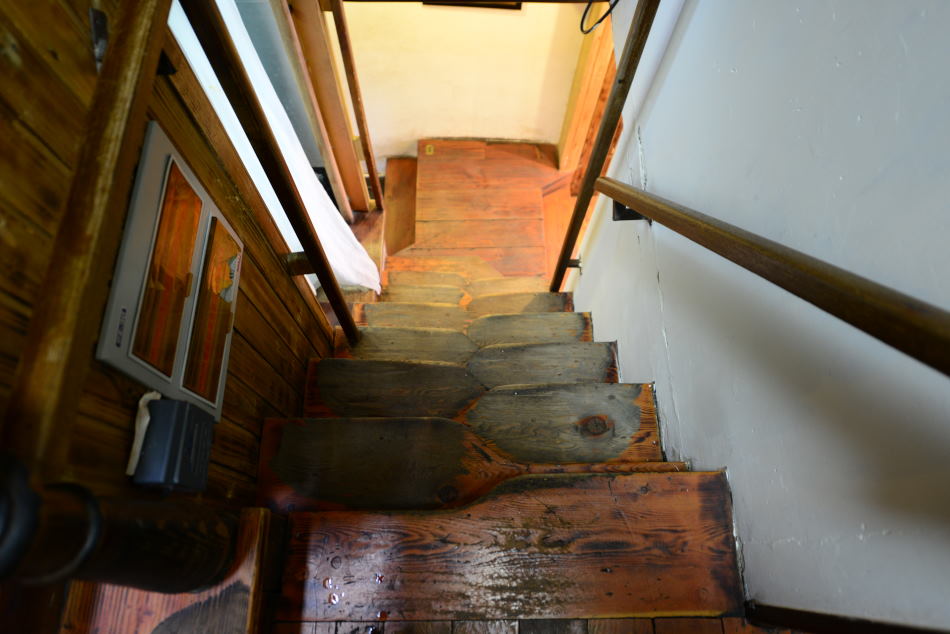 The alternating tread wooden staircase at Cafe Dan was an interesting feature. 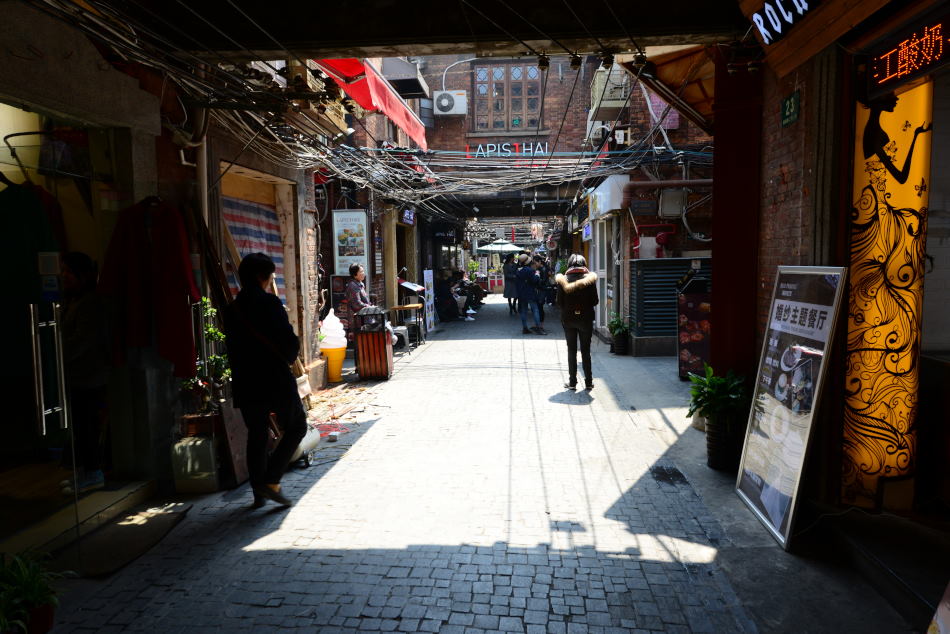 Heading out of Tianzifang to find our way to our next destination of the day, the small Blue Nankeen Museum.

From 1849 to 1943, the area that encompassed today’s Xuhui District and the western part of Huangpu District was under the French control known as the French Concession.  Large number of western buildings survive till today, and has since then become some of the most prestige residential neighborhoods and entertainment areas of contemporary Shanghai.

In the morning, we were to meet our friend near Xintiandi  (新天地).  We arrived a little earlier than planned, thus had a little bit of time to wander around Xintiandi and its nearby alleyways of shikumen (石庫門) residences.  Known as lilongs (里弄), these alleyway communities once dominated the majority of residential neighborhoods in the city.  Shikumen was a common type of terrace houses cladded in brick veneer over combustible timber structures.  In 2001, one of the most famous restored shikumen neighborhood in the Former French Concession opened its doors as a new lifestyle and entertainment destination in Shanghai.  Known as Xintiandi (New World), this adaptive reuse project offered new life to old neighborhoods not only in Shanghai, but also other Chinese cities.

After a short walk in Xintiandi, we met up with our friend.  Our friend took us for a quick detour to the newly built SOHO Fuxing Lu mixuse development to check out a cool lift lobby of a commercial building.  Then our friend led us to one of his favorite noodle soup.  We ordered two bowls of noodles: yellow fish and deep fried pork chops.  After the tasty breakfast, we continued our tour of the Former French Concession.

Next we arrived at Normandie Apartment or Wukang Mansion (武康大樓) at Wukang Road, a French Renaissance style building at a street corner similar to New York’s Flatiron Building.  Home to many Shanghainese celebrities, Normandie Apartment was designed by Hungarian-Slovak architect László Hudec, a renowned architect who lived in Shanghai from 1918 to 1945.  Inspired by the WWI battleship Normandie, the architectural form of the building resembles a ship.  The project was completed in 1924.

We continued our walk along Wukang Road to Ferguson Lane, an upscale leisure destination with shops, cafes, restaurants and galleries along alleyways and courtyards flanked by Art Deco buildings.  A long queue was lining up for what looked like a decent restaurant for bunch.  Equally popular was the French bakery where an irresistible smell of bread spread allover the leafy courtyards of Ferguson Lane.

Our morning stroll in the lilong alleyways near Xintiandi.

It was early morning when we arrived at Xintiandi.  Most stores had yet to open their doors.  We loved the tranquility of the street. The leafless trees along both sides of the road blended harmoniously with the building facades.

Beautiful shikumen building facades along the street at Xintiandi. 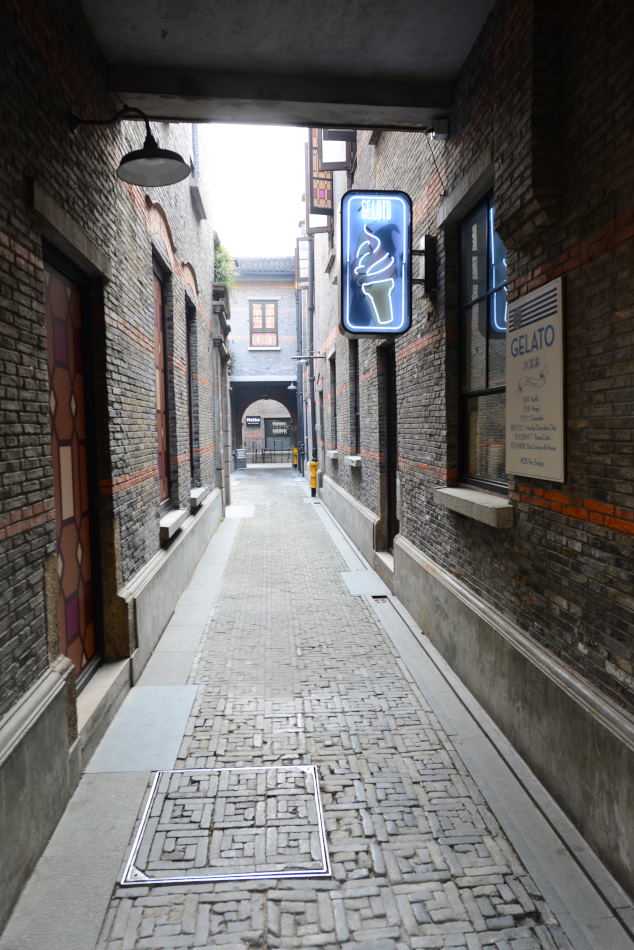 The peaceful and delightful mood blanketed the entire Xintiandi in the morning, before the arrival of tour groups.

Some buildings in Xintiandi serve as backdrop for tourist photos.

Our friend took us to a newly built office building at SOHO Fuxing Lu near Xintiandi to check out a cyber looking lift lobby design which has been published in design magazines. 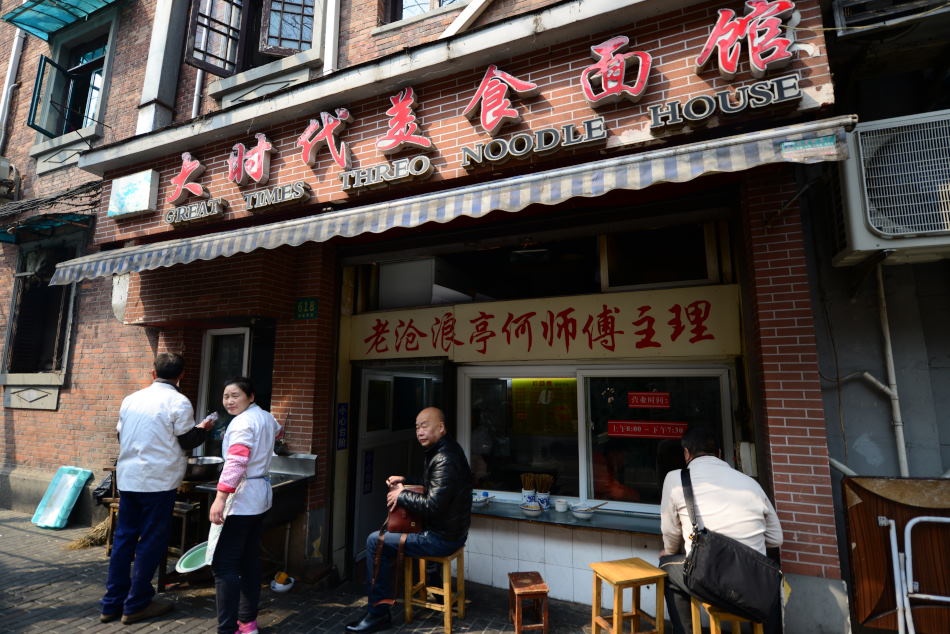 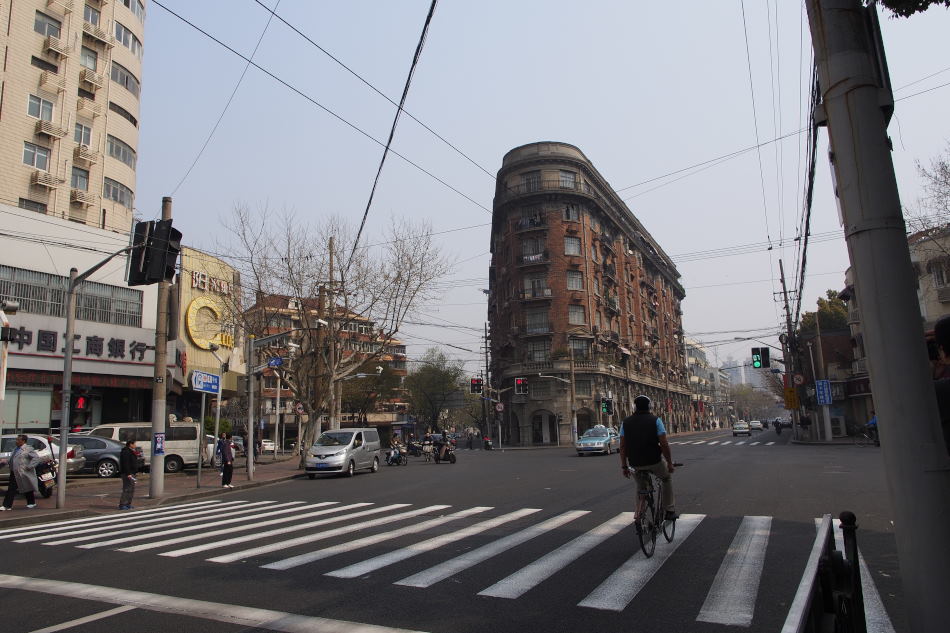 The curve corner of Normandie Apartment. 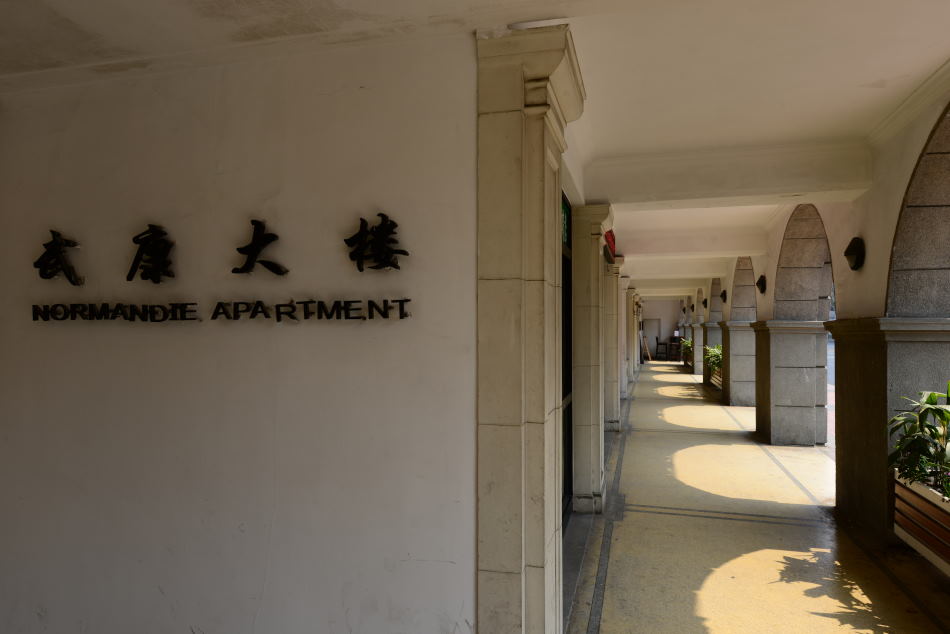 Normandie Apartment or Wukang Mansion (in Chinese) once represented a prestige address in the city.

The veranda at Wukang Mansion is one of the oldest in Shanghai. 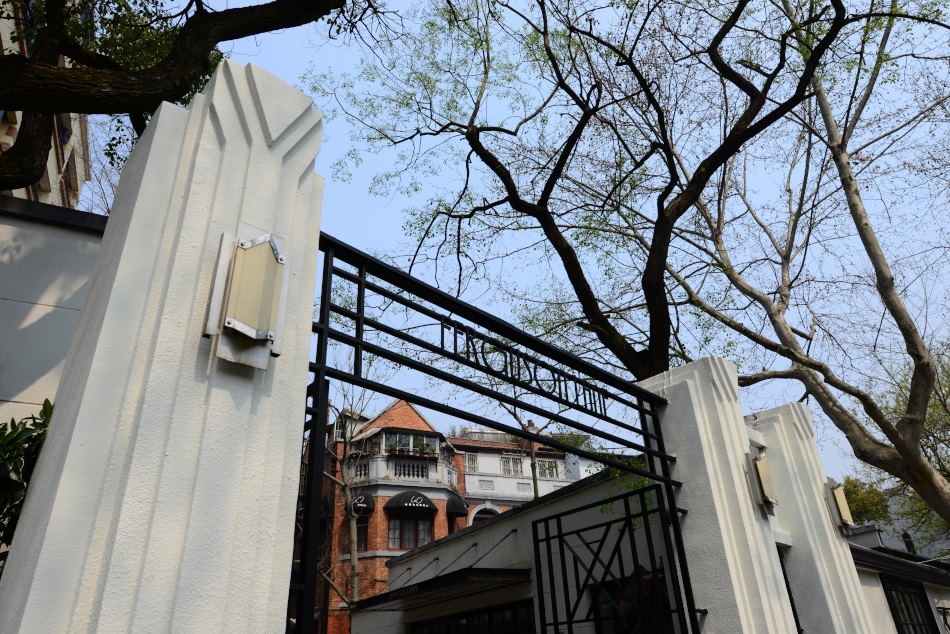 Signage at the main entance of Ferguson Lane revealed its Art Deco past.

Ferguson Lane, a warm and relaxing destination for anyone who seeks for a tranquil place to chill out.

Western buildings could be found everywhere on Wukang Road. 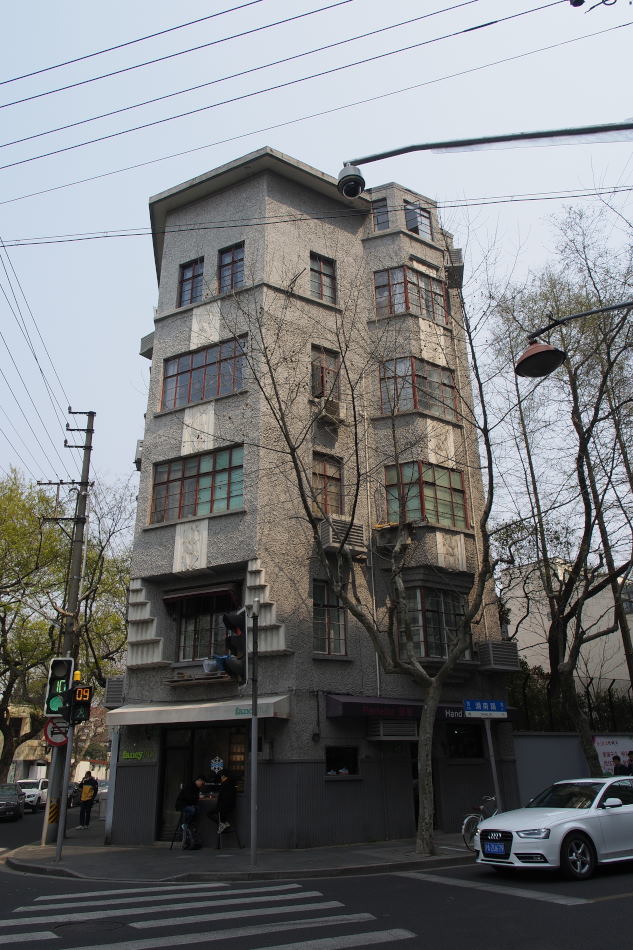 Another interesting building at the intersection of Wukang Road and Hunan Road.

Once again we felt like as if we were traveling in Europe.