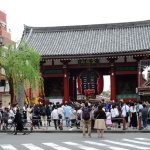 On the last day in Tokyo, we decided to pay a visit to Tokyo’s oldest and most popular Buddhist temple, the Sensoji (金龍山浅草寺) and Kengo Kuma (隈 研吾)’s Asakusa Culture and Tourism Center right across the street from the iconic Kaminarimon (雷門).  Sensoji was definitely the busiest attraction we visited in Tokyo.  Everywhere in the temple ground was filled with people, from the souvenir shop lined Nakamise Dori (仲見世通り) to the Kannondo Main Hall.

After the temple and Asakusa Culture and Tourism Center, we had a little bit of time left before heading to the airport.  We took the metro to check out the nearby Skytree, the tallest structure in Japan.  We didn’t go up to the observation deck of the tower, but instead wandered around at the shopping area and the outdoor terrace, where a group of tourists crowded in a small Calbee shop picking the colourful packs of special edition potato chips.

Soon enough, we returned to Shinjuku and boarded an Narita Express to the airport. 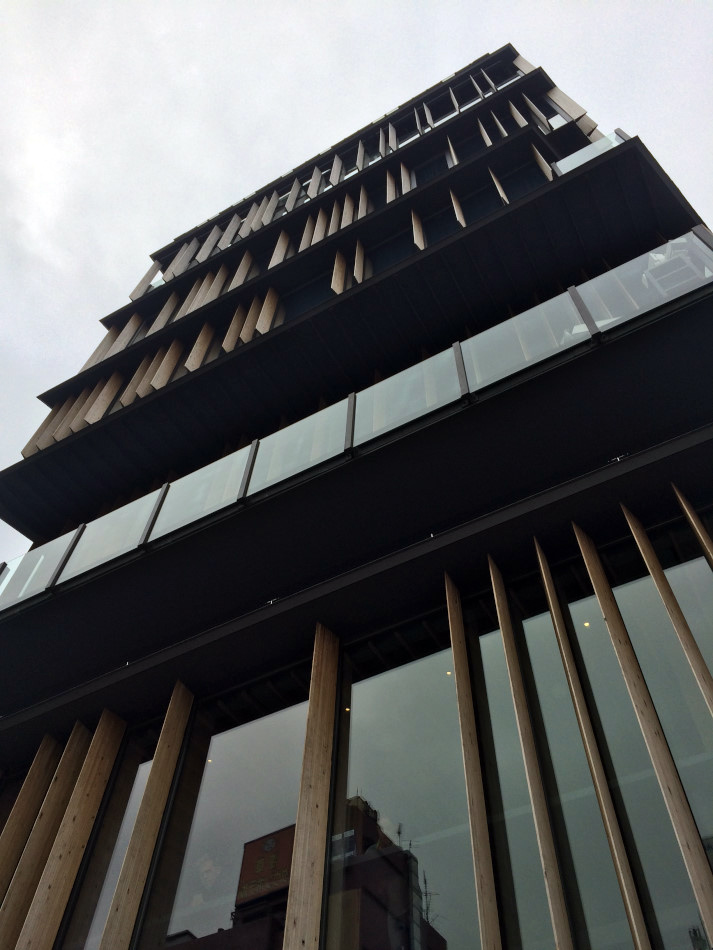 Designed by Kengo Kuma (隈 研吾), the eight storey Asakusa Culture and Tourism Center is an architectural gem across the street from the Sensoji.  With exhibition and activity spaces stacked vertically, each floor of the building has a distinct function.

The ground floor is dedicated to an introduction of the district of Asakusa.

On the roof terrace of Asakusa Culture and Tourism Center, there are information signage on the railing associated with the view. 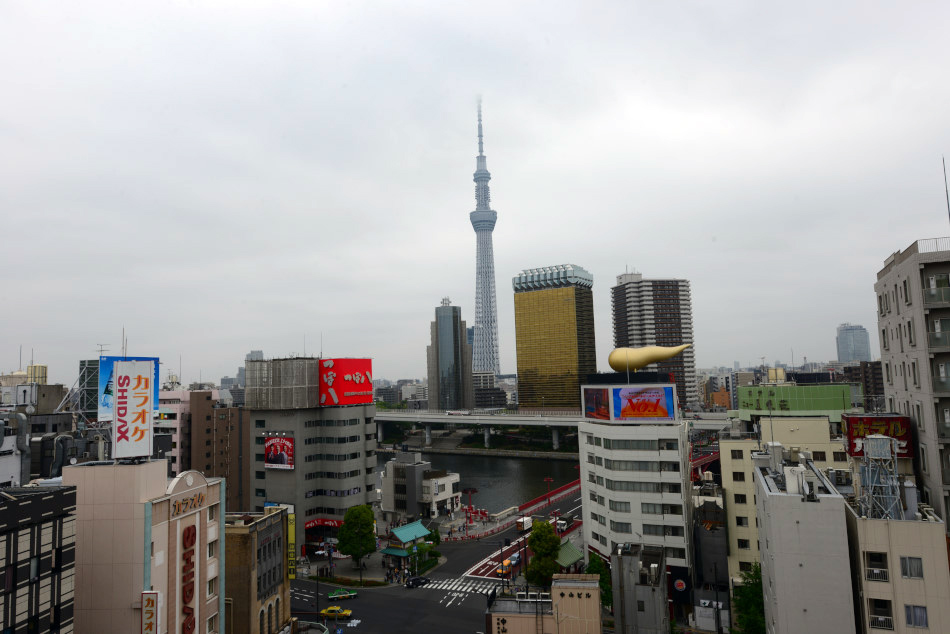 At two metro stops to the east, the 634m Tokyo Skytree (東京スカイツリー) stands out at the background, while the wavy golden feature of the Asahi Beer Hall dominates the foreground.  Designed by famous designer Philippe Starck, the golden feature is meant to represent the burning heart of Asahi beer.

To the north, the view from Asakusa Culture and Tourism Center is dominated by the Nakamise Dori (仲見世通り), the procession route of Sensoji. 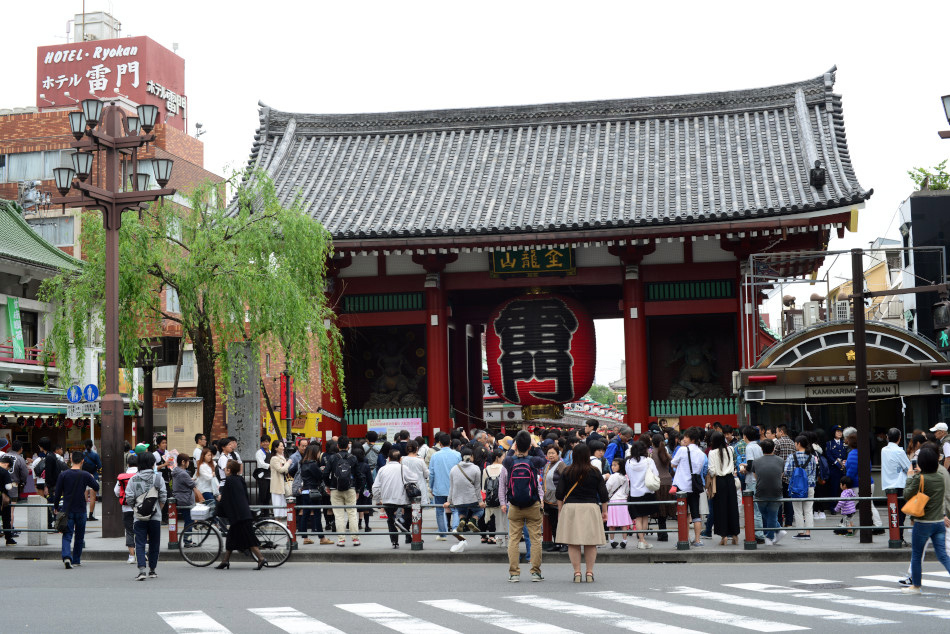 Across the street, the iconic Kaminarimon (雷門) or “Thunder Gate” marks the start of Nakamise Dori (仲見世通り).

Standing 11.7m tal, with its enormous lantern and statues at both sides, Kaminarimon (雷門) is very popular with tourists and locals. 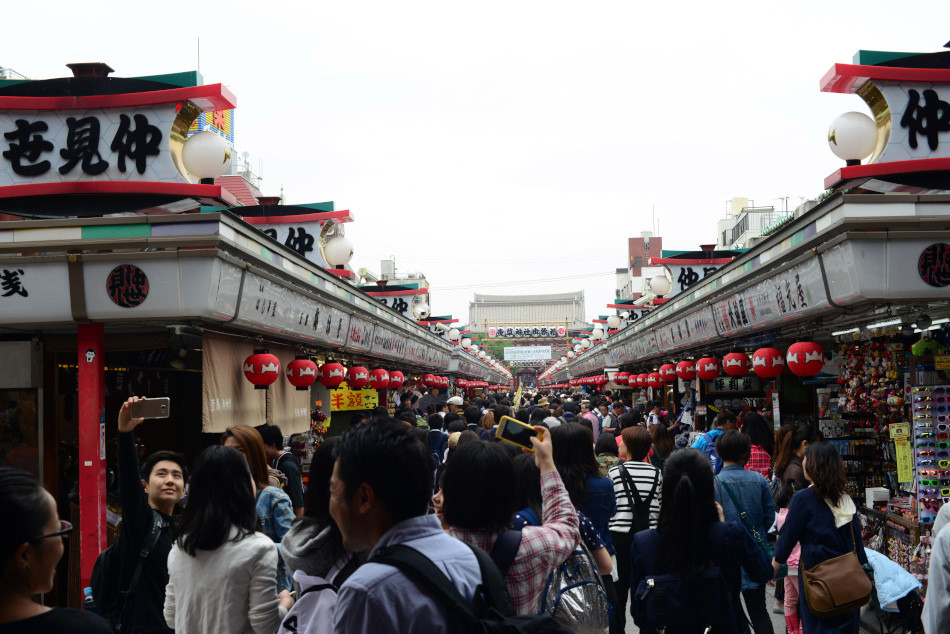 Lined with souvenir and snack stores at both sides, the 250m Nakamise Dori (仲見世通り) is always packed with visitors. 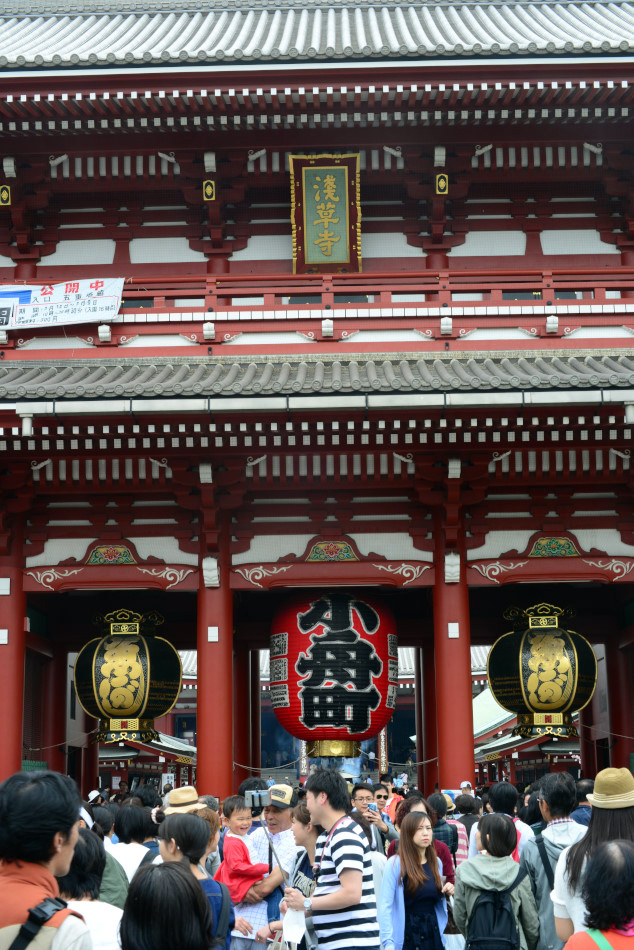 A cute white akita dog rests at the courtyard in front of Hozōmon (宝蔵門).

The prominent Tokyo Skytree (東京スカイツリー) can be seen from Sensoji. 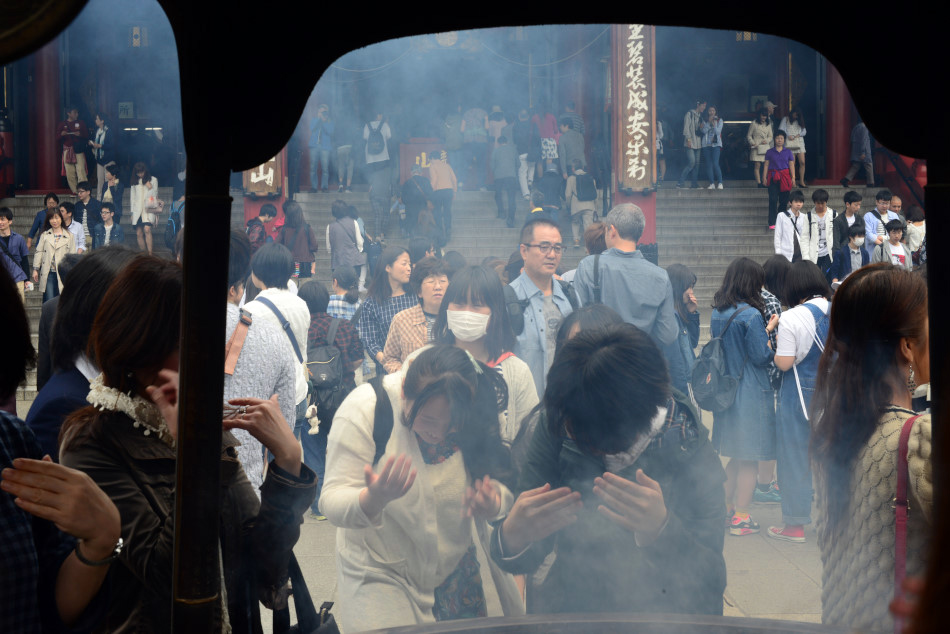 Many visitors would gather close to the big incense burner in the central courtyard and cover themselves with the smoke, due to a traditional belief that the smoke can improve their thinking and make them smarter. 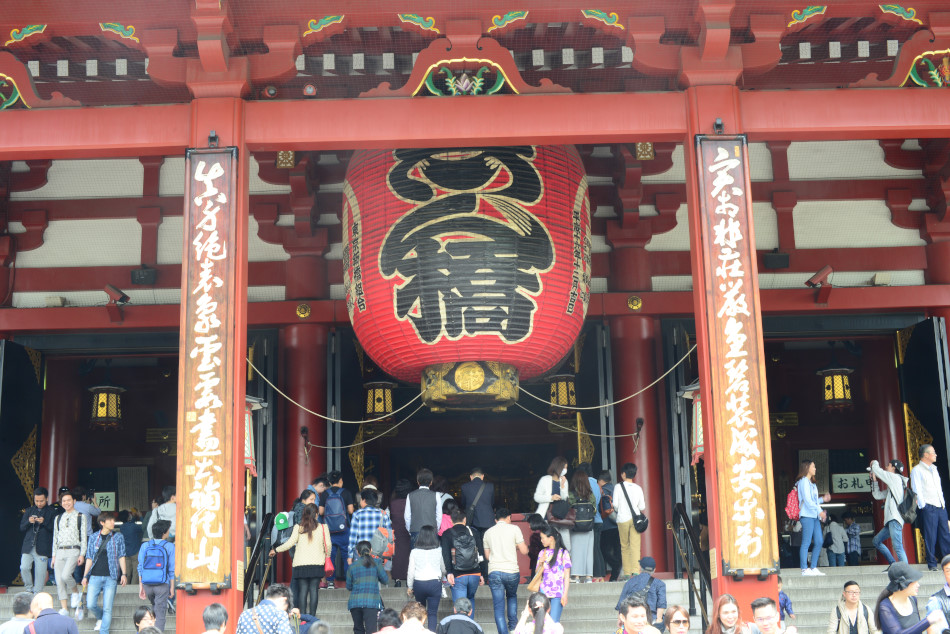 The entrance of the Kannondo Main Hall is also decorated with a huge red lantern. 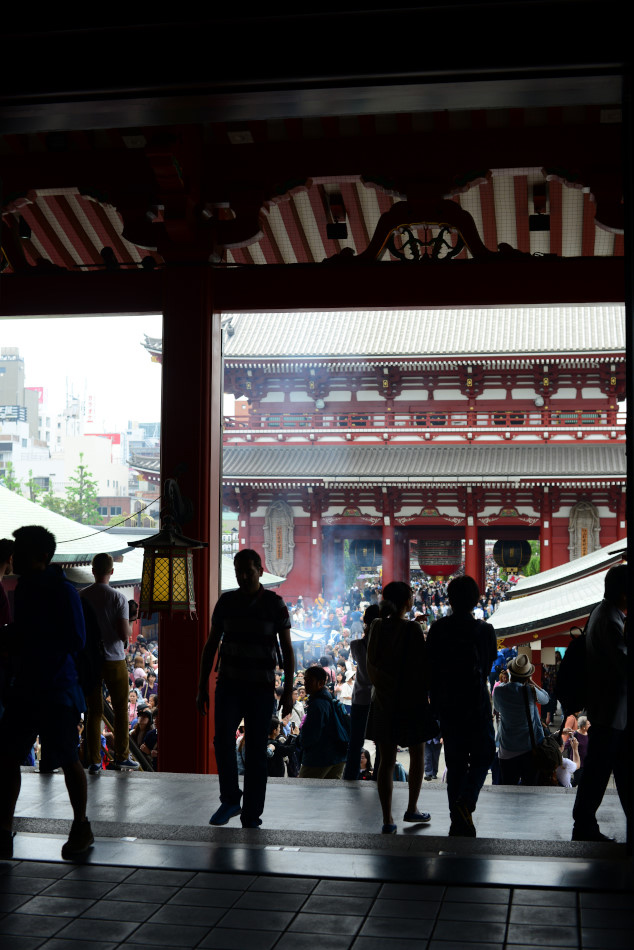 With 30 million of visitors per year, the Sensō-ji (金龍山浅草寺) is one of the most visited religious site in the world.

Traditional lanterns on the pavement waiting to be hung.

The five-storey pagoda is also another main feature at Sensō-ji (金龍山浅草寺). 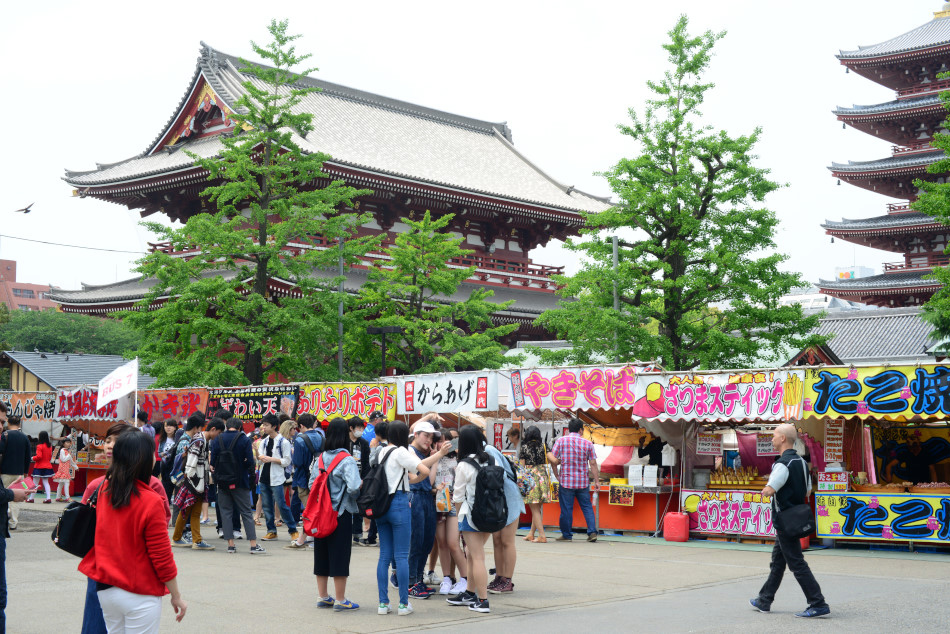 At the main ground of Sensō-ji (金龍山浅草寺), there are a row of food vendors selling all kinds of Japanese snacks.

Near Sensō-ji, the famous Azumabashi (吾妻橋) is a popular spot to photograph the Tokyo Skytree (東京スカイツリー) and Asahi Beer Hall.

At the base of Tokyo Skytree (東京スカイツリー), a series of outdoor terraces provide a pleasant approach to the tower.

Designed by Nikken Sekkei, the 634m Tokyo Skytree (東京スカイツリー) is the second tallest structure in the world just behind Burj Khalifa (830m).