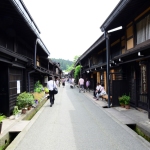 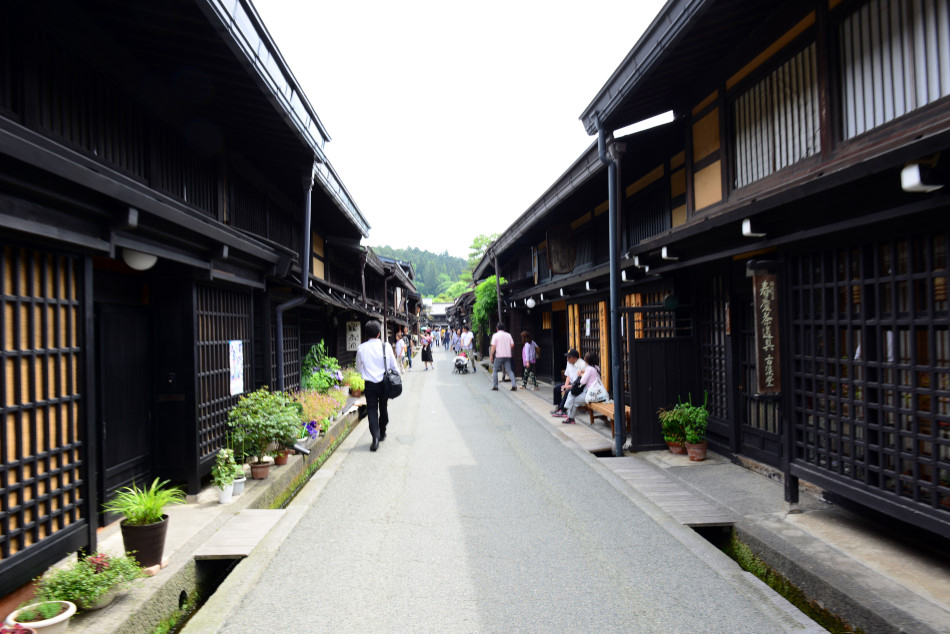 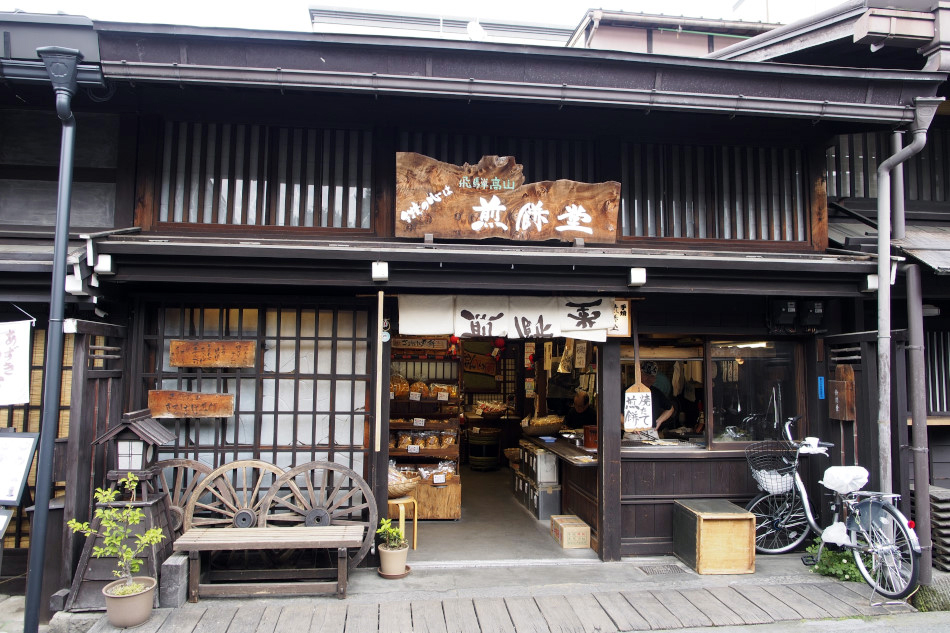 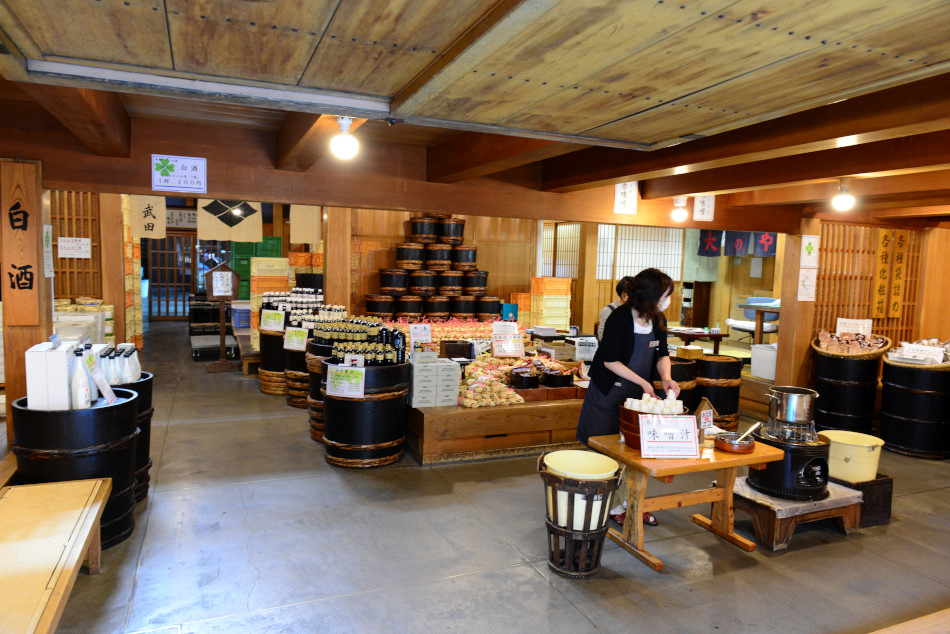 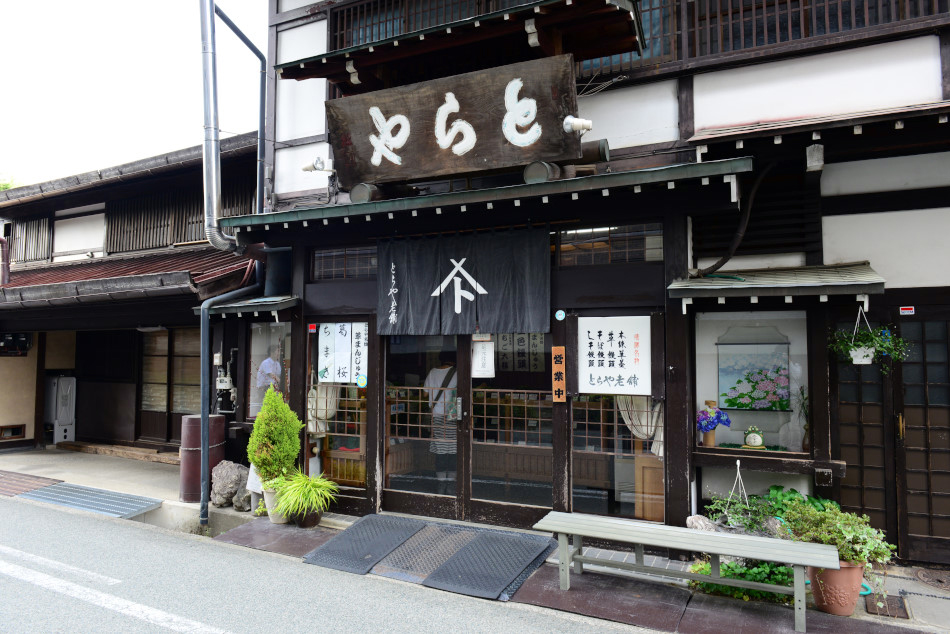 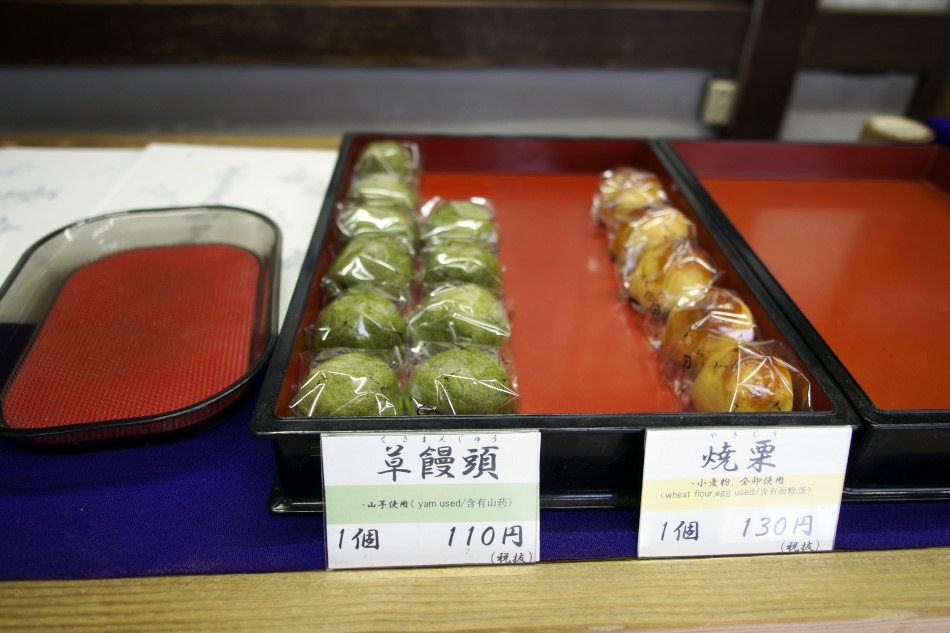 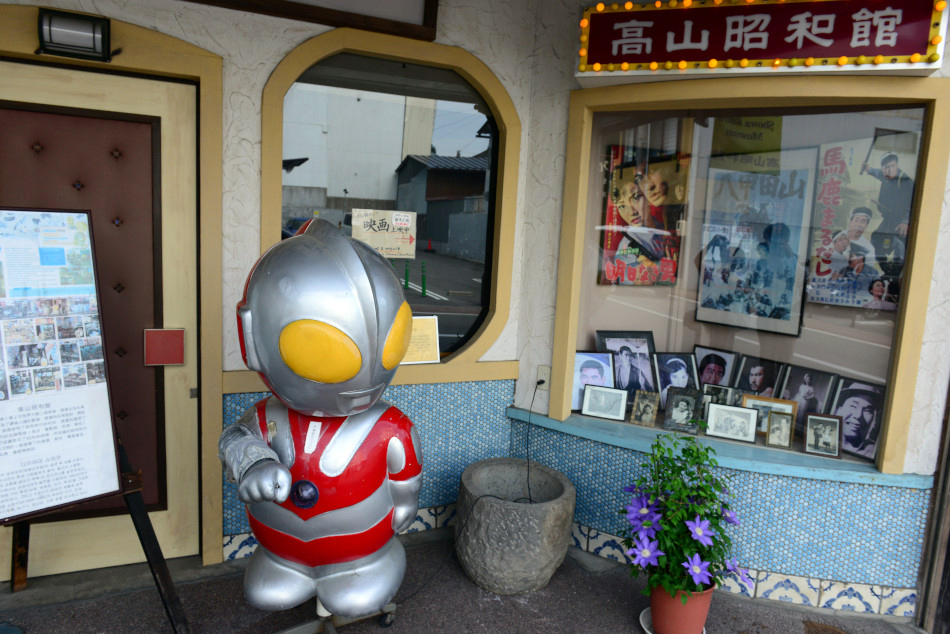 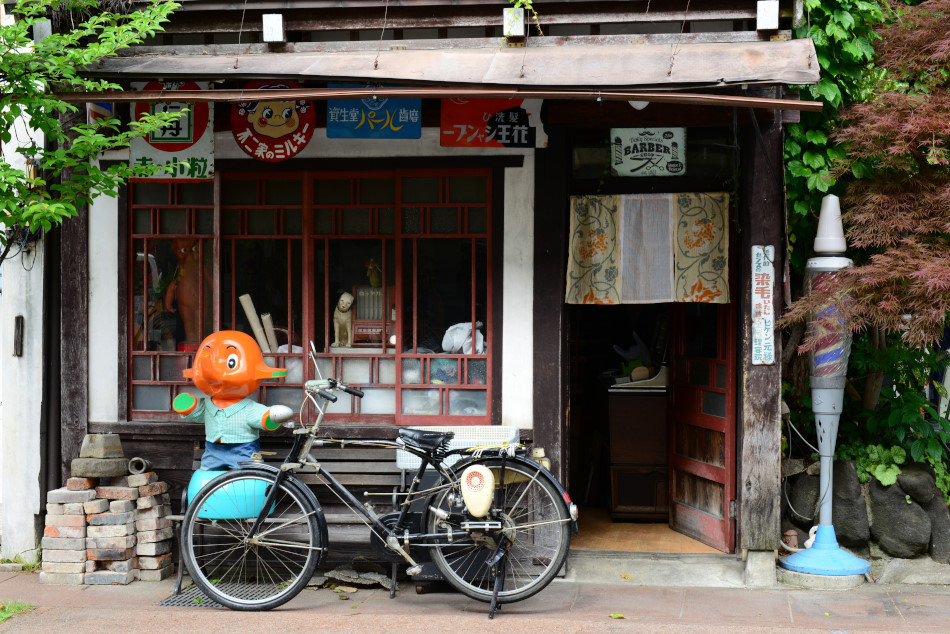 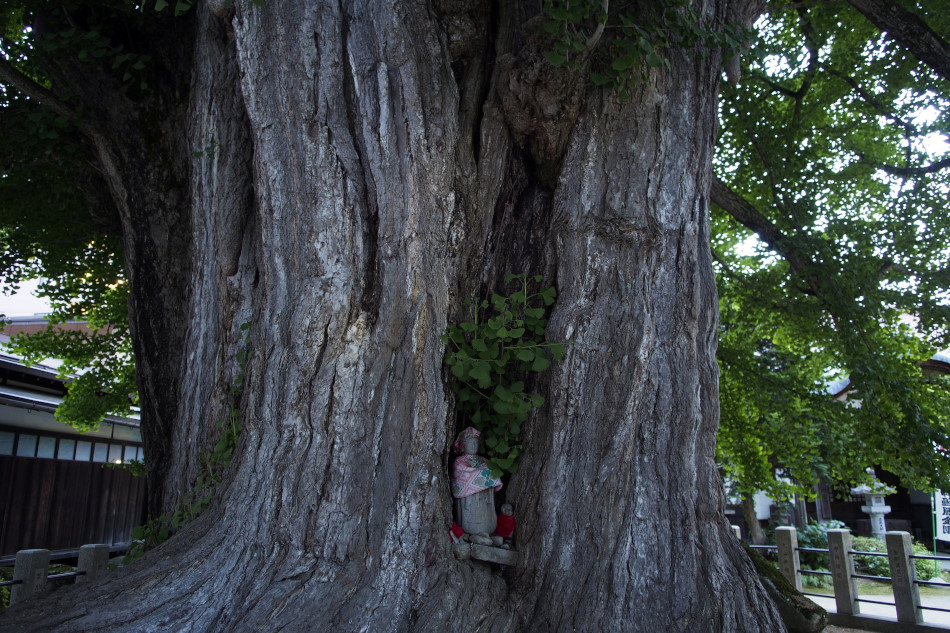 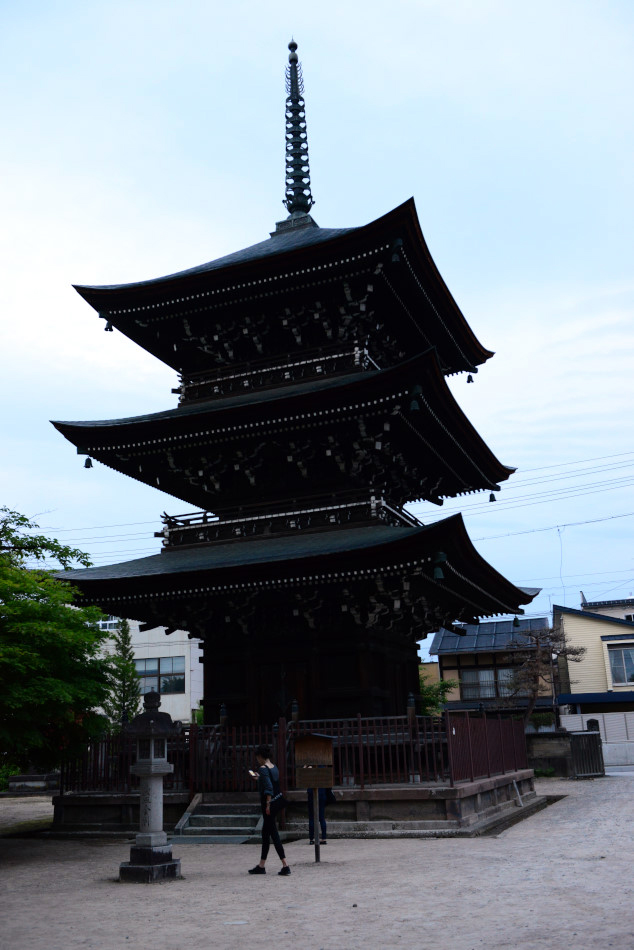 For 700 years, oysters have been farmed in the water of Deep Bay/ Shenzhen Bay (后海灣) near the sleepy village of Lau Fau Shan (流浮山).  Situated in the Pearl River Estuary where fresh water constantly enters the bay, Deep Bay/ Shenzhen Bay is a perfect site for oyster farming.  Today, Lau Fau Shan is the last remaining site in Hong Kong that oyster cultivation still exists.  Generations of oysters and oyster sauce consumption have put these molluscs an important part of cultural heritage of, not just Lau Fau Shan villagers, but Hong Kong citizens in general.  In fact, the oyster species cultivated in Lau Fau Shan is known as Crassostrea hongkongensis, which is named after the city itself.  Oyster farming has gone through a gradual decline since 1980’s, partly due to climate change, ocean acidification and deterioration of local water quality, and partly due to stronger competition of foreign oysters in the local market in recent years.  Apart from oysters, Lau Fau Shan is also best known for its seafood restaurants and the romantic sunset over the tidal flats.  Standing by the waterfront, the Hong Kong-Shenzhen Western Corridor (深港西部通道) or Shenzhen Bay Bridge and the myriad of highrise constructions over at the Shenzhen side stretch along the horizon, while on the Deep Bay’s southern shore in the sleepy village of Lau Fau Shan, time seems to have stood still in the past few decades. 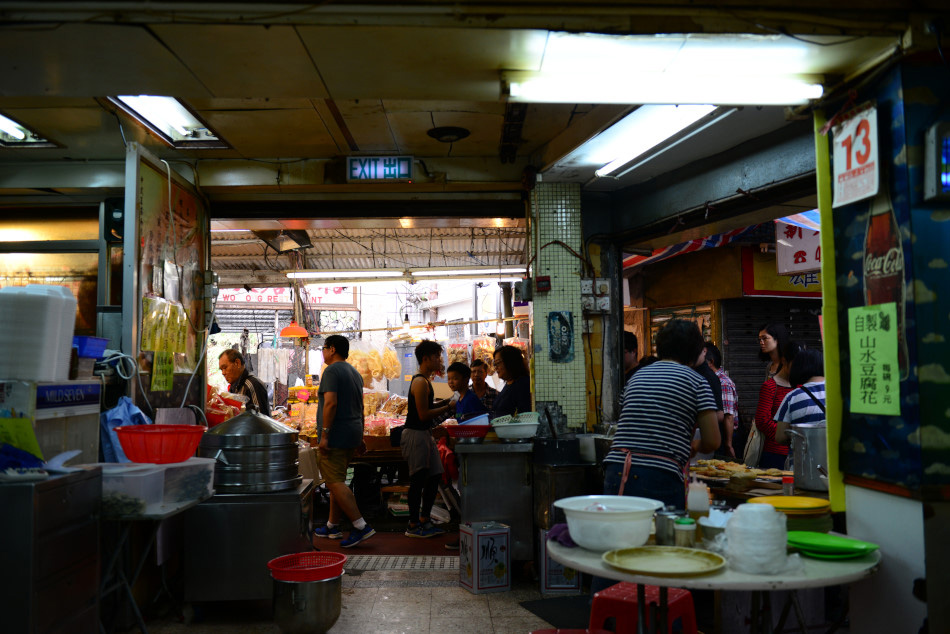 Coming all the way to the northwest corner of Hong Kong, we entered the village of Lau Fau Shan and immediately stopped by a small eatery by the main street.  Trying the fried or grilled oyster at one of the several simple eateries offers a pleasant alternative to the more upscale seafood restaurants along Lau Fau Shan Main Street.

The special attraction of Lau Fau Shan is indisputably the oysters.

Some seafood restaurants look quite traditional and casual. 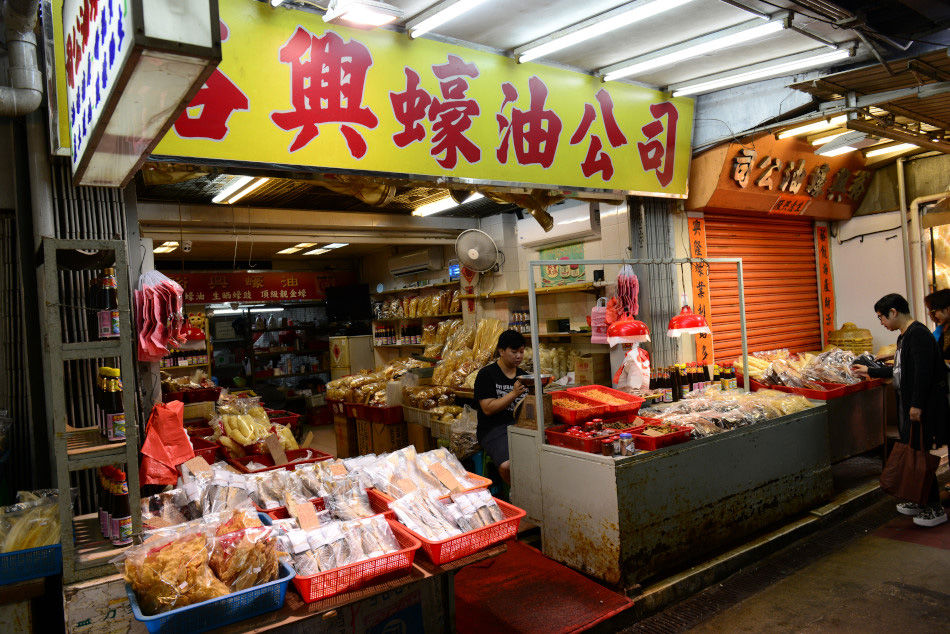 There are a few shops in Lau Fau Shan specialized in making oyster sauce.  Inevitably oyster sauce has became one of the most popular souvenir of the village. 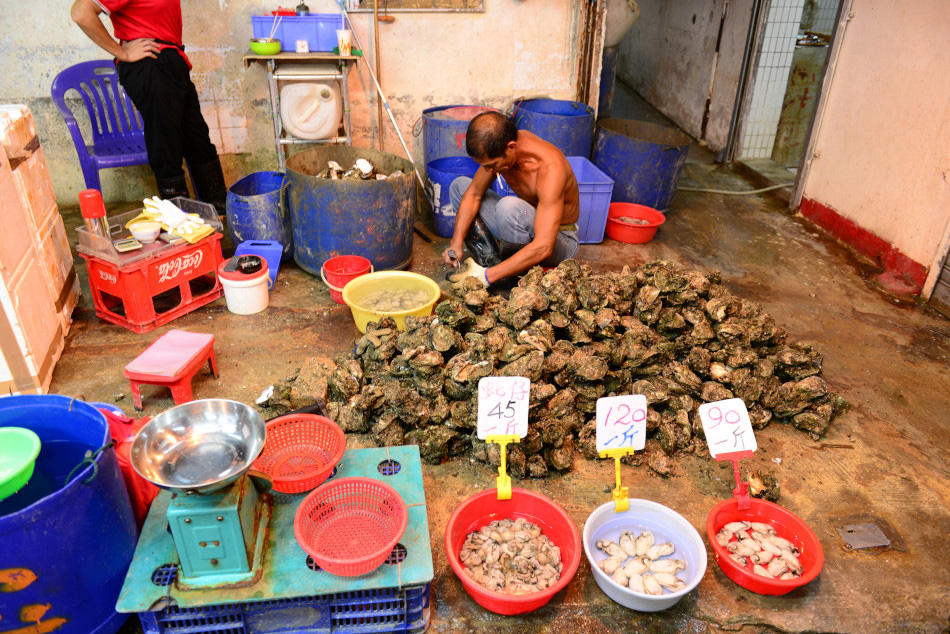 Along the main street, two workers were busy opening the harvested oysters for sale.

Along the main street, different types of dried seafood were sold.

Near the waterfront, containers and air tubes for live seafood lie all over a temporary covered area.

The waterfront of Lau Fau Shan was covered with oyster shells.

Many boats just lay on mud flats during low tide.

At the waterfront, the shallow water over the mud flats looked like a peaceful mirror.  Beyond the Deep Bay stood the silhouette of another metropolis of Southern China, Shenzhen. 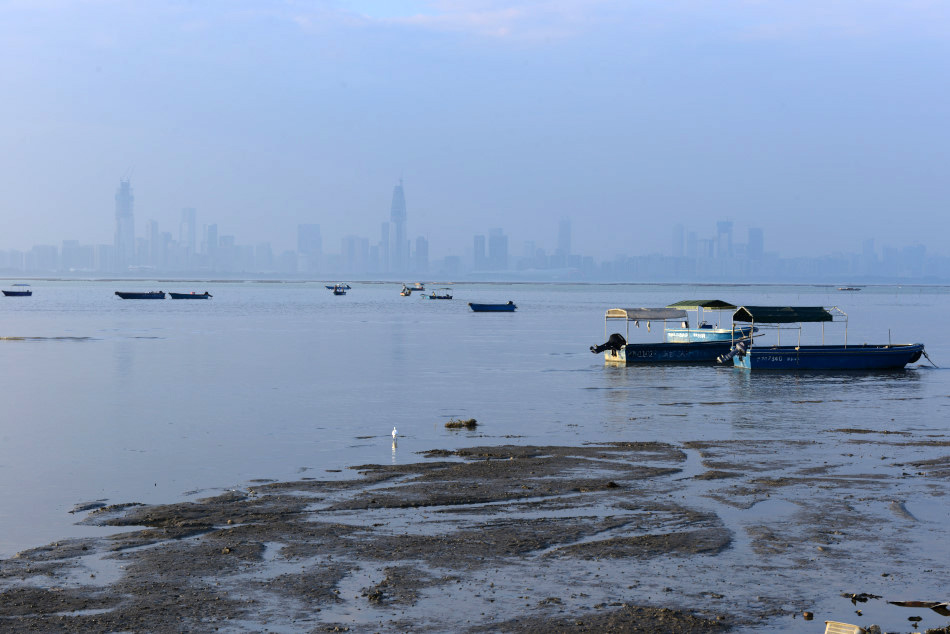 From a fishing village before 1980 to today’s metropolis of over 10 million inhabitants, the emergence of Shenzhen is a miracle to many.

While we took pictures of mud flats and Deep Bay, a cyclist emerged from nowhere and stopped for a moment at the waterfront.  Beyond lay the 5.5km Hong Kong-Shenzhen Western Corridor (深港西部通道), or the Shenzhen Bay Bridge (深圳灣公路大橋) linking the two cities at the Deep Bay since 2007.

The sun finally appeared behind the clouds, casting an orange tint to the drying seafood by the shore.

In late afternoon, more boats returned from Deep Bay.  Some boats arrived at the pier and offloaded passengers who might have spent the entire day fishing in the bay.

The silhouette of Hong Kong Shenzhen Western Corridor (深港西部通道) or Shenzhen Bay Bridge (深圳灣公路大橋) stood out along the western horizon under the late afternoon sun.

Soon enough, the sun made its daily routine down to the horizon beyond the bridge.

As the sun lowered to the horizon, the tide had also quietly returned to the waterfront of Lau Fau Shan. 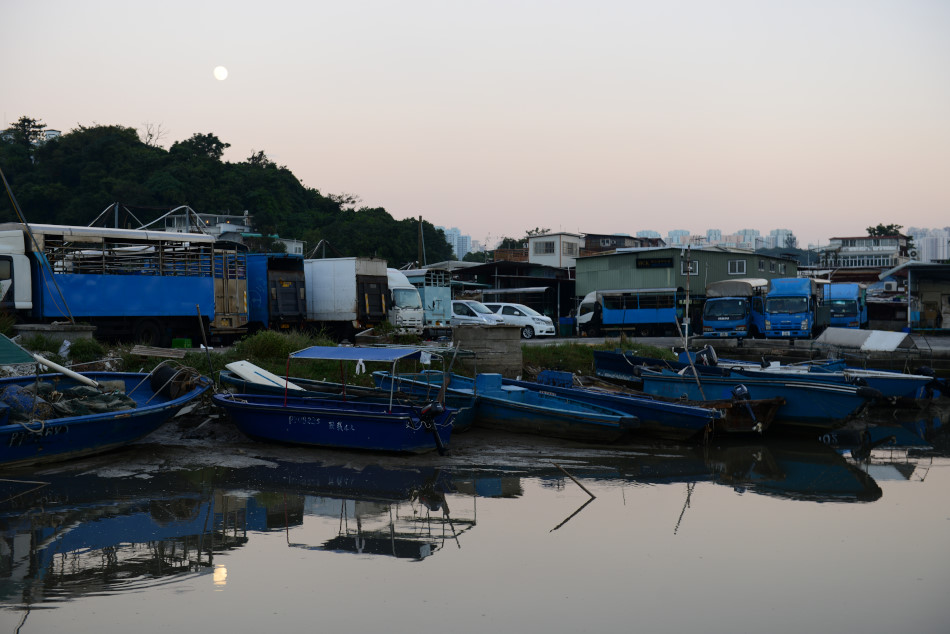 The moon was already up above Lau Fau Shan.  Most tourists had left except a few passionate photographers refusing to leave the waterfront despite the sun was fading fast.

As we left the waterfront of Lau Fau Shan, the lights from the opposite shore began to lit up one by one.