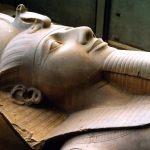 While Pharaoh Khufu stole the limelight for 4,500 years as the king who built the Great Pyramid of Giza, much few people may acknowledge that Khufu’s success was built upon the earlier experiments of his father, Pharaoh Sneferu. At 40km south of Cairo, Dahshur was the experimental ground for Sneferu, who famously built the three predecessors that ultimately led to the success of his son’s Great Pyramid. The three Sneferu’s pyramids in Dahshur reveal the evolution of pyramid construction, from Meidum Pyramid: Egypt’s first smooth-sided pyramid that had partially collapsed since the ancient times, to Bent Pyramid: another smooth-sided pyramid whose change of inclining angle midway had led to a bent effect, and finally to Red Pyramid: Egypt’s first successfully constructed smooth-sided pyramid.

After Saqqara, we intended to go to Abusir, another necropolis of Memphis just like Saqqara. However, we were told that Abusir was not open for some reason, so we turned to Dahshur instead. Dahshur was another well-known necropolis that served the royal members of Memphis in the Old Kingdom. Famous for its three unique pyramids, Dahshur is a must-see site if one is interested in Egyptian pyramids. Our taxi drove us to pass by the Bent and Black Pyramid, and then stopped at the biggest of them all, the Red Pyramid. There were not many tourists around, so we decided to pay the admission to enter the Red Pyramid. Named after the slightly reddish limestone, the Red Pyramid is Egypt’s third largest and also the oldest smooth sided pyramid.

The sloped passage down to the burial chamber at the pyramid’s heart was narrow and dimly lit. With an slope of 27 degrees down, a 1.2m width and 0.91m height, the journey down the 61m passage was no small feat. For the entire way we were forced to hunch down with our backs touching the passage ceiling, and move down carefully one step at a time. We heaved a sigh of relief after reaching the end of the tunnel, but was a little disappointed to find the empty chamber at the end. As expected no artifacts were in display in the chamber. The 15m corbel vaulted ceiling was quite impressive, given the fact that we were almost 100m below the top of the pyramid, under millions of tons of limestone.

Our next stop was Mit Rahina Museum or what commonly known as the Memphis Open Air Museum. Memphis, the ancient Egyptian capital in the Old Kingdom, was once a prosperous trading, manufacturing and religious centre in the region of Nile Delta. For many centuries, the ruins of the abandoned Egyptian capital had been pillaged for constructing other structures in the nearby Arab cities. Not much of the great city survived to the present day, except the artifacts in the open air museum and what might still lie underground. The biggest draw of the museum is an enormous limestone statue of Ramses II lying in the establishment’s feature gallery.

Communal baths and gymnasiums were essential components in the ancient Roman society.  Records show that 952 baths of different sizes could be found in Rome in 354 AD.  Apart from building up the body and engaging on social gossip, a bath and gymnasium complex might also house a library, a theatre, food shops and reading rooms. Erected right at the hot spring of Pamukkale, Hierapolis was a prominent Roman spa resort.  Other than the usual bathing rituals, bathing in Hierapolis was also a form of medical treatment.  Founded in the 2nd century BC as a thermal spa town, where doctors used the hot springs to treat patients.  In its heyday, Hierapolis had bath houses, gymnasiums, temples, fountains, theatre.  Thousands would come to visit the hot spring, including the Roman emperors.  The city of 100,000 became a wealthy city prominent for art, philosophy and trade.  Outside the city wall, the enormous necropolis suggests that many ancient Romans who came to Hierapolis for medical treatment actually died in the spa city.  The recently discovered Tomb of Philip the Apostle and a number of historical sites in Hierapolis suggest Christianity had taken a strong hold in the city from Late Antiquity to the Byzantine era. 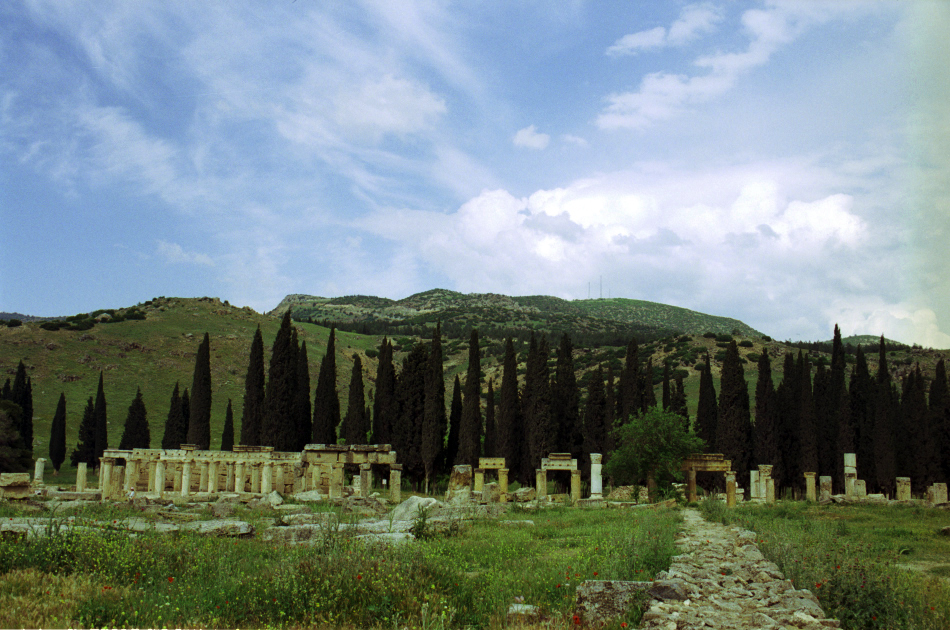 Many tourists come to Hierapolis to take a dip in a pool among ruined marble columns.  The pool is, in fact, doing a disservice to the archaeological conservation.  We just spent time wandering around the ruins leisurely and aimlessly.

Red poppy and yellow wild flowers covered large parts of the ground among the ruins of Hierapolis.

Built in 2nd century AD under Emperor Hadrian, the theatre at Hierapolis has 45 rows of seats that could accommodate about 15,000 spectators.

Tombs and sarcophagus of different sizes could be found in the necropolis.  Some sarcophagus were elevated by a post and beam structure.

The extensive necropolis stretches kilometers and contains thousands of tombs from different era. 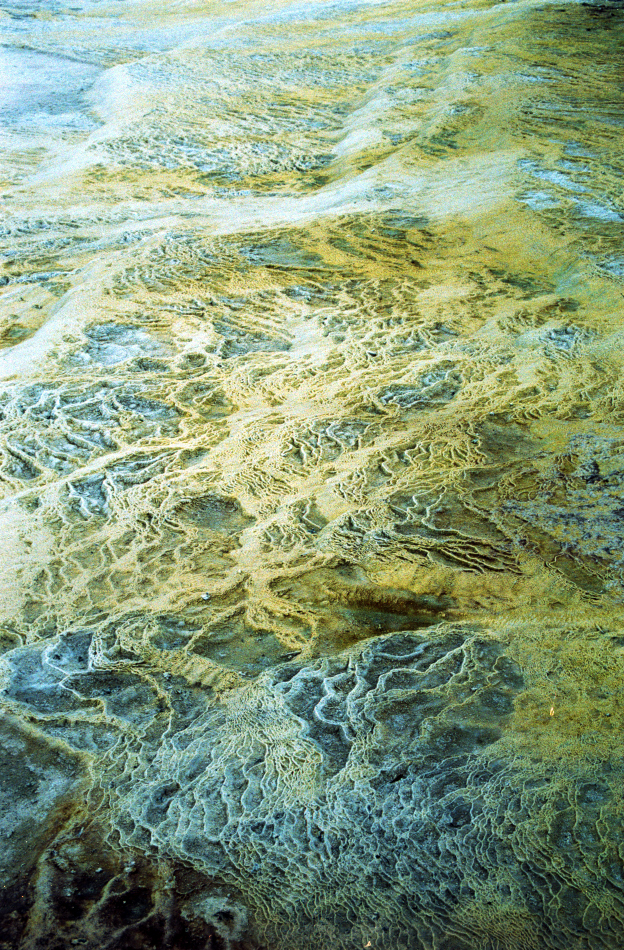 We once again passed by the travertine terraces of Pamukkale as we left Hierapolis.

Instead of walking down the travertine terraces in barefoot once again, we opted for another winding path to descend.  The path is not for people who scares of height.