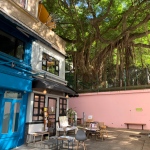 Perhaps it is the lack of traffic, or its proximity to the adjacent business and entertainment quarters in Central, Tai Ping Shan Street in Poho is like no other residential street in Hong Kong. It has its dark history of the 1894 plague, and forgotten stories of the early Chinese migrant workers. It has its fair amount of heritage buildings, old temples, side street deadends and stone staircases to construct a certain kind of vintage and causal ambience. It could be precisely the unique and rich cultural history and the causal mood of the area that have attracted a diverse community to station in the area, making Tai Ping Shan Street the coolest neighborhood in Hong Kong. A few years ago, some travel magazines and websites put Sheung Wan as one of the world’s coolest neighbourhoods, and it was largely due to Tai Ping Shan Street in the district. The excitement of Tai Ping Shan Street originates from the influx of artists, designers, expats, and young residents who come to look for a more tranquil alternative to the nearby Soho. Gradually, it has become an interesting example of what Jane Jacobs would describes as a successful neighborhood focused on pedestrian permeability, mixed public uses, buildings of various ages, diversity of inhabitants, vibrancy of commercial and community activities, etc. While Teakha (trendy tea shop), Homey (family run cafe), Green Ginkgo Tea (Japanese lifestyle tea house), Frantzén’s Kitchen (Michelin recommended Nordic cuisine), Crit Room (sleek Italian cuisine), Reserva Iberica (ham shop), Espana Espana (Spanish fine dining), CRAFTISSIMO (international crafted beer), support a strong contemporary culinary scene, Fo Kee(科記), Yuk Kin(郁健) and Sun Bor Kee (新波記) continue to offer local fast food (street eatery) at street corners where neighbours and pet dogs mingle throughout the day. Art galleries, fashion boutiques, designer pop up shops, and hair stylists open their business just a few meters away from a cluster of the city’s oldest temples. The juxtaposition of the old and new, east and west, reveals the core spirit of what Hong Kong culture is all about. Apart from the exciting foodie scene and designer stores, Mount Zero Books has stood out in recent years as the hub that has brought the Poho community together. Situated at a dead end, the bookstore often organizes events right outside their door, fostering a strong community bonding. This is the bygone sense of community that has somehow disappeared in time as Hong Kong is being developed into a global financial hub. All the above excitement is miraculously packed in less than 200m of the one way street, forming some lovely streetscape that won’t be found anywhere else in Hong Kong.

But Tai Ping Shan Street wasn’t always about the stylish and trendy. Lying one street lower than Po Hing Fong, Tai Ping Shan Street was once the densest neighborhood in the Victoria City during the 19th century. While the terraces around Po Hing Fong and U Lam Terrace were home to upper and middle class Chinese residents, Tai Ping Shan Street was cramped with shared housing for migrant workers arriving from Qing Imperial China seeking opportunities in Colonial Hong Kong. Most of them had families in Canton or beyond, and they hardly knew anyone when they first arrived. The Buddhist temples, especially Pak Shing Temple (百姓廟), served as the main community hub for these newcomers. Free meals and accommodation were provided for the sick. When one passed away, body of the deceased would be stored in the temple for later transport back to Mainland China, or for simple burial in the nearby Po Yan Street near the current Tung Wah Hospital. News of the poor living environment and dire treatment of the sick and dead circulated back to London, forcing the colonial government to support local charity groups to establish Tung Wah Hospital as the city’s first hospital in 1870 to treat the locals with Chinese medicine (as most Chinese refused to take Western medicine during that time). Then the plague came in 1894 and the government was determined to tackle the poor living conditions of Tai Ping Shan by clearing some buildings to make way for the Blake Garden, and building the city’s first public toilet and shower facility at Tai Ping Shan Street. The area was cleaned up as time went by, but among the older generations, Tai Ping Shan is still haunted by the memories of the sick and dead. Even today, coffin stores and funeral homes still exist around the area, reminding people its darker past despite its contemporary bohemian flair. Today, Tai Ping Shan remains as the rare location in the city where a pub or a hamburger eatery can coexist with a coffin store side by side. It is the juxtaposition of paradoxes and clashes of cultures that make Tai Ping Shan Street and the Poho area the coolest neighbourhood in Hong Kong. 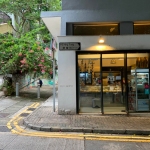 Staycation has become a new normal for most of us. Since the pandemic began in early 2020, international tourism has come to a complete halt. We have taken this peculiar opportunity to explore Hong Kong, walking away from our usual routes, making detours into unfamiliar alleyways, and find out more about the city’s fading memories. In the next little while, we are going to write about Hong Kong, the city where we stationed ourselves since 2014. Out of the city’s 1,106 sq. km of land, we will first focus on places within 15 – 20 minutes of walking distance from our apartment, in a 2.5 sq.km area between Victoria Peak and Victoria Harbour that we consider as our own neighborhood.

In the shadow of Hong Kong’s glittering skyline lies the historical Tai Ping Shan area (太平山) in Sheung Wan District (上環). Hundreds if not thousands of staircases crisscross the terraced terrain where streets are often narrow, steep and sometimes inaccessible to cars. Centered around the streets of Po Hing Fong and Tai Ping Shan, a fashionable neighborhood known as Poho has been the focus of the Tai Ping Shan area for quite some time. A diverse combination of fine dining restaurants, causal eateries, sleepy cafes, wine store, cheese and ham shop, antique shops, cool boutiques, bookstores, barber shops, Buddhist temples, churches, schools, small design offices, small museums, youth centres, residential apartments, etc make up a multifaceted community that is quite unique in Hong Kong, not to mention the rich architectural history and collective memories since the founding of the city. Poho is a neighborhood where east meets west, traditions collide with contemporary trends, elderly mingle with young expats, and where the beauty of urban diversity still prevails over the hustle of urban gentrification.

On 20 January 1841, the British landed on the shore of Sheung Wan and established 156 years of colonial rule on Hong Kong island. Just east of Sheung Wan, the British picked the waterfront and hillside area known as Central to established the heart of their newly founded Victoria City, the capital city of Colonial Hong Kong. On the slope of Sheung Wan just above the British landing spot, the city’s first Chinese residential neighborhood Tai Ping Shan emerged right away and soon developed into the densest place in Hong Kong. Wealthy Chinese businessmen mingled with newcomers from China looking for job opportunities in this dense neighborhood. A devastating plague in 1894 swept through the streets of Tai Ping Shan, and completely transformed the physical characteristics of the neighborhood as the British decided to tackle the density and hygiene of the area and established the first hospital catered for Chinese patients. Since then, Tai Ping Shan never looked back and has transformed into the cool Poho. With the world’s most expensive property prices, Hong Kong is a synonym for rapid urban transformations. Residents across the city are used transient living conditions throughout their lives. Poho’s narrow alleyways and staircases have somehow managed to escape dramatic changes and remained a tranquil but energetic urban oasis just a stone throw away from the world famous financial district.