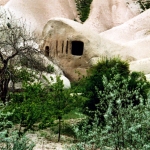 Centuries ago, pigeon droppings or manure was a valuable commodity in many parts of the world.  Since 5000 years ago, humans began to domesticate pigeons and collect their nitogen-rich manure.  Compared to manure from other farm animals, pigeon manure is considered to be much better quality for making fertilizer.  Some even suggest that places where domesticating pigeons was a common practice would lead to better agricultural development and ultimately more advanced societies.  Apart from providing manure for fertilizer, pigeons were also a source of food, entertainment and message carriers.  In Medieval times, the value for pigeon manure soared even higher as saltpetre from the manure was used to make gunpowder, while its ammonia was used for leather making.  In some cases, guards were even assigned to protect dovecotes from potential thieves.

From the earliest dovecotes in Egypt and Persia, the round and white columbarium of the Romans, to the distinctive pigeon towers across Europe, Asia and North Africa, dovecotes had been an integral part of village communities and a common type of vernacular architecture.  In Cappadocia, man made pigeon holes can be found from villages to river valleys.  Similar to other cave dwellings in the region, dovecotes were carved out from cliffs or rocks.  A short hike in the Pigeon Valley is the best way to take in the unique landscape, search for the pigeon holes, and imagine how humans and pigeons coexisted and being relied on each other throughout centuries. 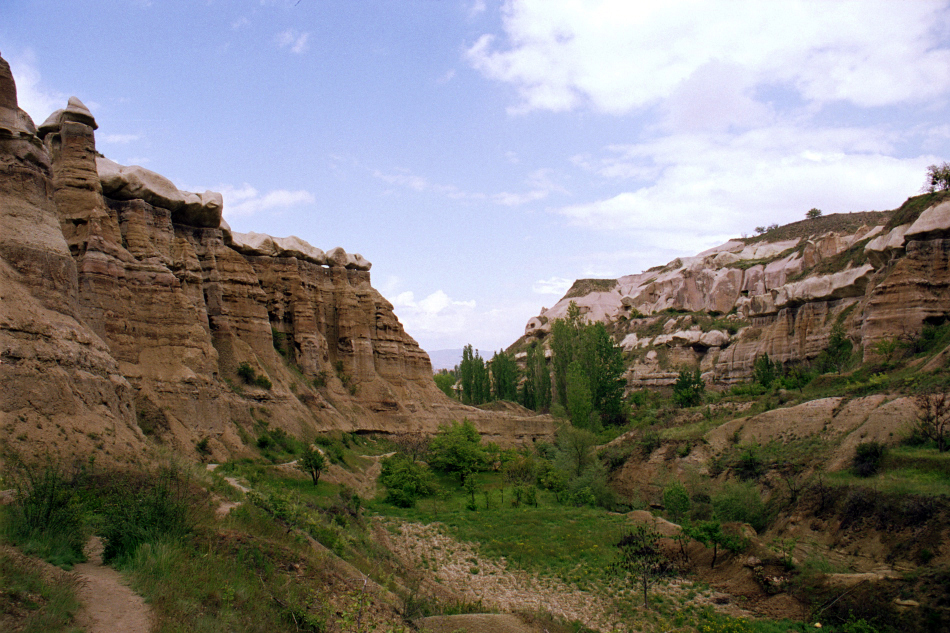 Lying between the village of Uchisar and Goreme, the trail of Pigeon Valley is about 4km long.

The fortress of Uchisar marks as the destination of the trail if one begins from Goreme. 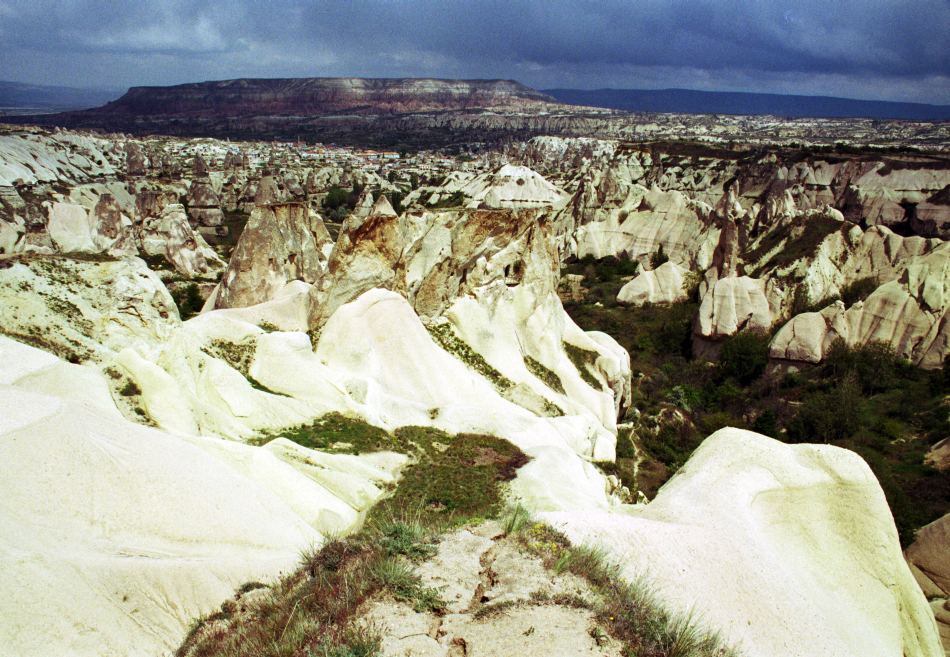 The scenery of Pigeon Valley and the surrounding valleys was breathtaking whenever we arrived at a high lookout. 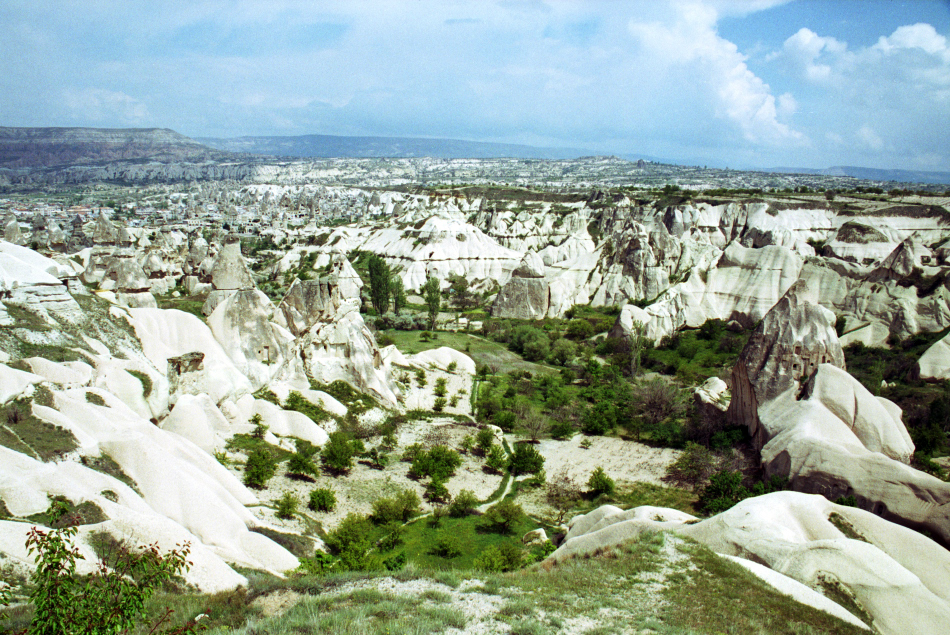 No fence and no signage, we had to rely on simple maps to find our way. 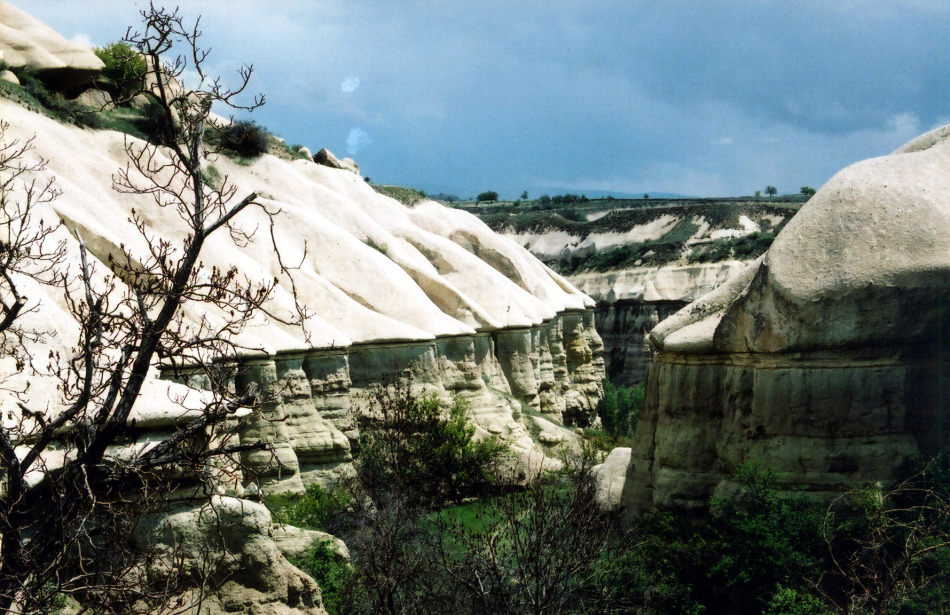 The valley floor was relatively lush green, with dovecotes and occasional small dwellings carved into the cliffs.

Rock cut dwellings in strange rock formations are everywhere in the valley. 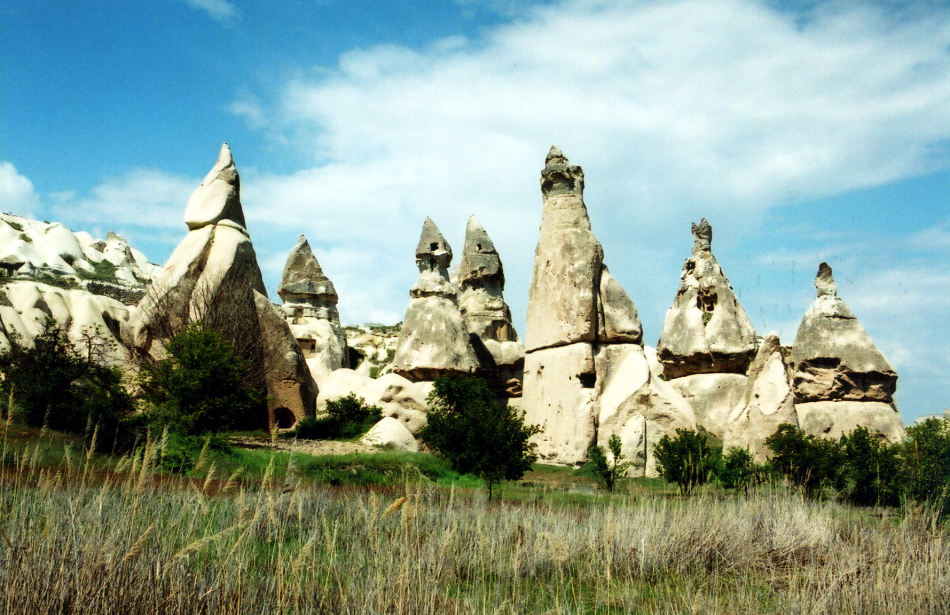 Man made pigeon holes are found on many rock towers in Pigeon Valley.

Many dovecotes are no longer in use, although some local villagers continue to keep pigeons as pets. 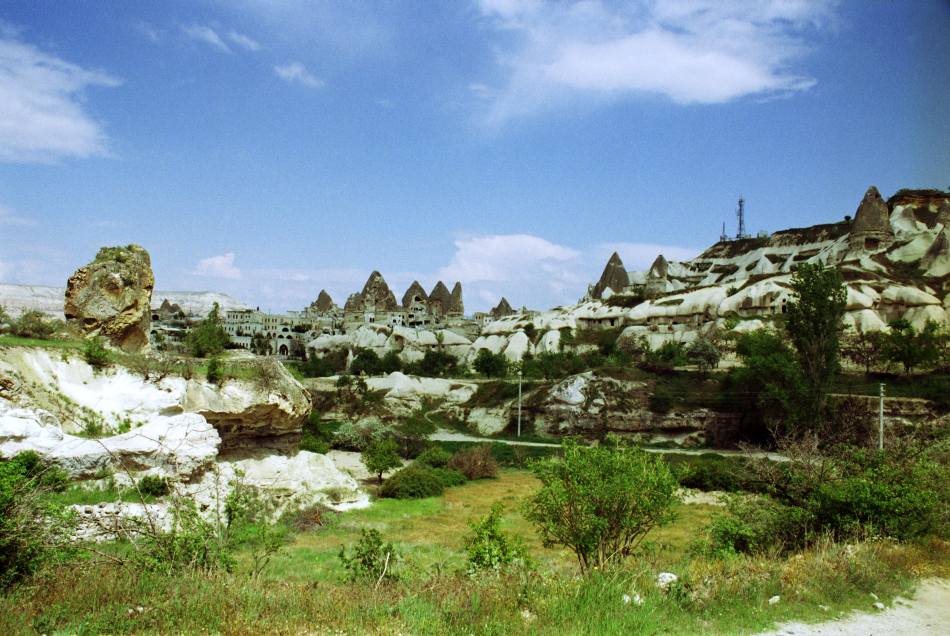 Villages like Uchisar or Goreme is never far away from Pigeon Valley.

The Pigeon Valley hike is one of the most rewarding short walk near Goreme.

Spotting out the dovecotes as we walked in the valley was also an interesting pastime during the hike. 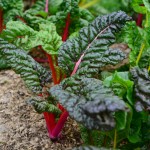 On the northern slope of Tai Mo Shan (大帽山) at a place called Pak Ngau Shek (白牛石) in the area of Lam Tsuen (林村), 148 hectare of organic farms, botanical gardens and mature forests terracing up to the summit of Kwun Yum Shan (觀音山) reveal over half a century of efforts by the Kadoorie Farm (嘉道理農場).  Established in 1956, Kadoorie Farm has always stood at the forefront of Hong Kong’s agriculture, experimenting on new techniques and providing agricultural aid to farmers in need of support.  In 1951, the Kadoorie brothers (Horace and Lawrence) established the Kadoorie Agricultural Aid Association (KAAA) in an attempt to help the sudden influx of Mainland farmers into Hong Kong during the Chinese Civil War in the late 1940’s.  They picked Pak Ngau Shek (白牛石) near Lam Tsuen (林村) to establish an agricultural facility engaging in experiments on profitable and effecting farming and animal breeding, and training the new farmers with their developed techniques.  Today, Kadoorie Farm and Botanic Garden (嘉道理農場暨植物園) diversifies their effort to promote organic farming, sustainable living, nature conservation and education.  They also run extensive rehabilitation program for wild animals in Hong Kong.

Linked by 9 km of roads and 8 km of trails, various highlights of the Kadoorie Farm spread over the slope of Kwun Yum Shan (觀音山).

One of the big highlights at the lower section of Kadoorie Farm is the “Eco Garden” (生機園), exhibiting different types of self sufficient and compact farming in a community scale.

The garden presents natural and organic ways to maintain soil’s nutrients and insect control, and the best combination of vegetables for each season.

Other than its freshness and taste, the organic vegetables such as the purple cabbages are also beautiful.

Spherical bird scarers are hung over a cluster of rainbow chards in the Eco Garden.

A wavy fence separates the Eco Garden with the other terraced farms and botanic gardens.

Other than organic farming, more innovative planting techniques are also examined at the Eco Garden.  Some farming techniques that requires less space or soil may suit urban living well.

At the Piers Jacobs Wildlife Sanctuary, native mammals such as a Barking Deer or Muntjac (麂) have been rescued as an orphan and raised in the sanctuary.

The wild boar is also another rescued orphan at the sanctuary.  Both wild boars and barking deer can be found in the forests in and around Kadoorie Farm.

In the old days, pig breeding was an important work at the Kadoorie Agricultural Aid Association (KAAA).  Today a few Da Hua Bai Pigs (大花白豬) are kept at the farm for educational purposes.

Amphibians and reptiles are both vulnerable groups of wildlife in Hong Kong due to habitat loss.  Kadoorie Farm has a few of the native species at the Amphibian and Reptile House and Reptile Garden.

Interesting pavilions and artworks are all over the farm, including a dragon boat pigeon house.

And also the fish mosaic at the Cascade Garden near the Chicken House. 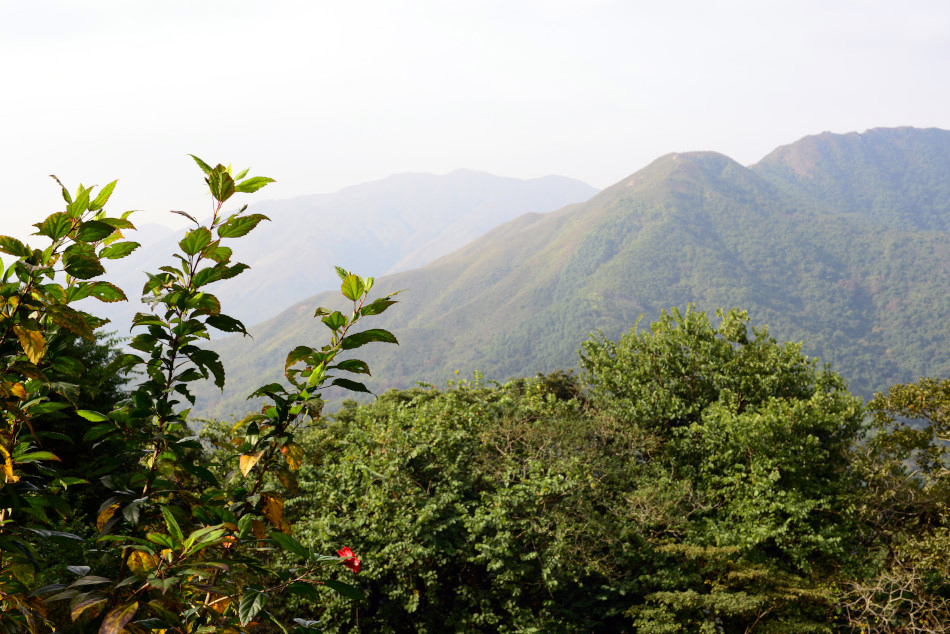 As the farm terraces up the hillside of Kwun Yum Shan (觀音山), the view to the surrounding landscape becomes more spectacular. 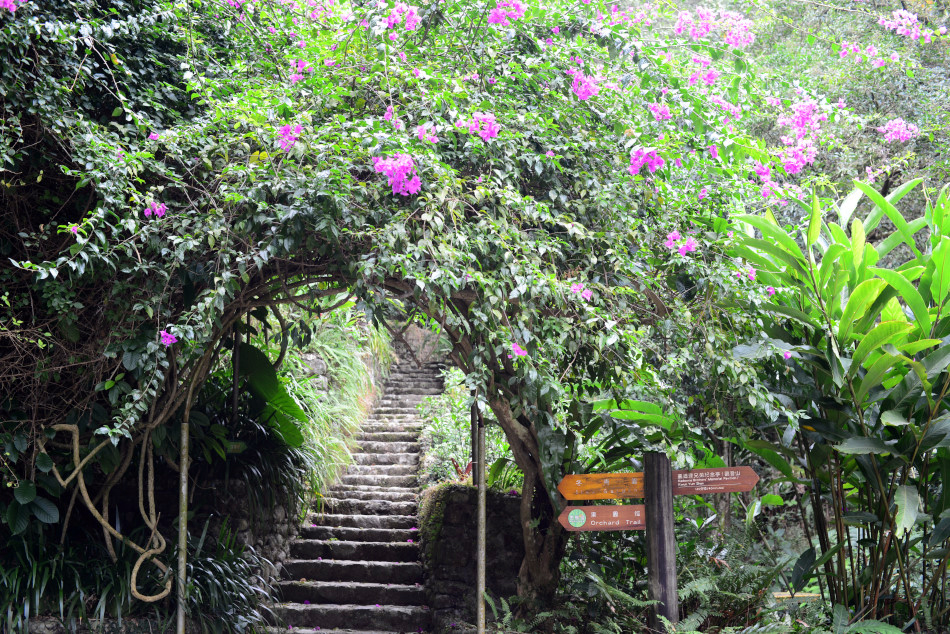 The Butterfly Path winds up the hill through dense forests and open terraces, following part of an old trail which led the locals up the hill of Kwun Yum Shan (觀音山) for a religious blessing.

In order to preserve the natural feel, there is minimal modern safety infrastructure provided at the Butterfly Path.

9 km of roads circulate up and down the Kwun Yum Shan (觀音山), going through some densely forested areas, the habitat for some native species in Hong Kong, such as the barking deer. 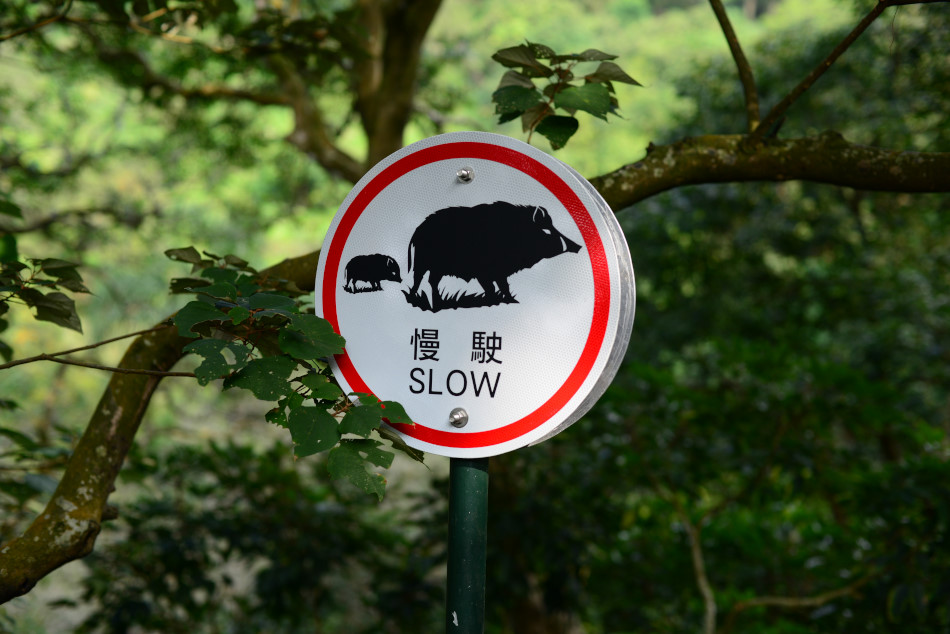 … and the wild boar. 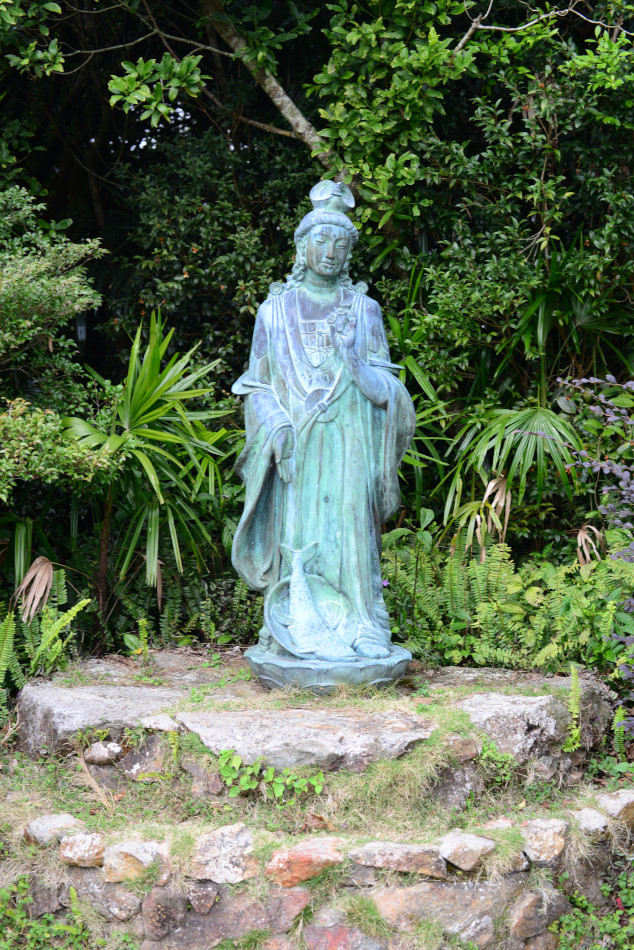 At 550m above sea level, the summit of Kwun Yum Shan (觀音山) is the highest point in Kadoorie Farm.  For centuries, farmers came up to the summit to seek blessings from the goddess of Kwun Yum. 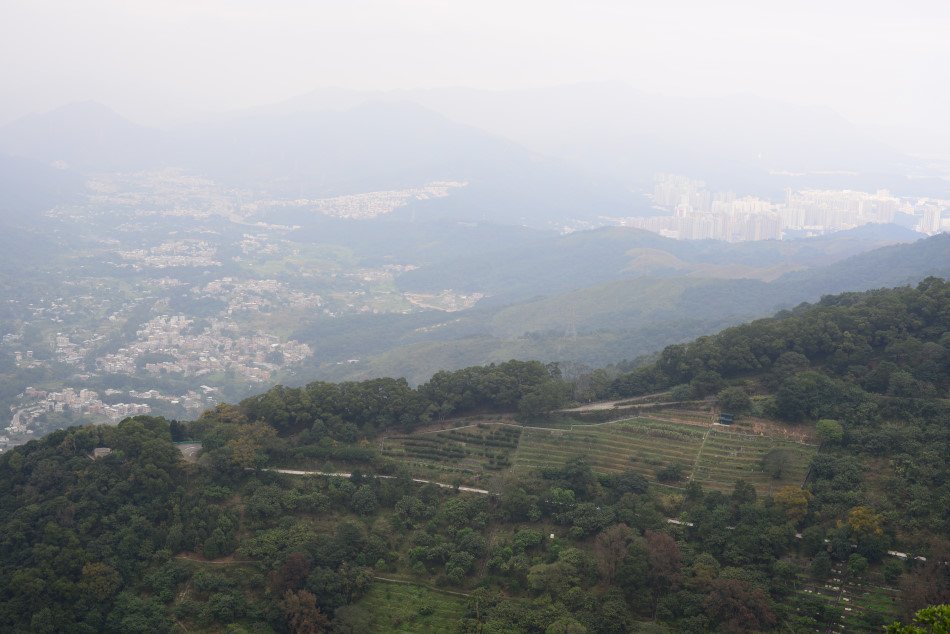 The summit of Kwun Yum Shan (觀音山) allows visitors to have fine view of the New Territories and even Shenzhen on a fine and clear day. 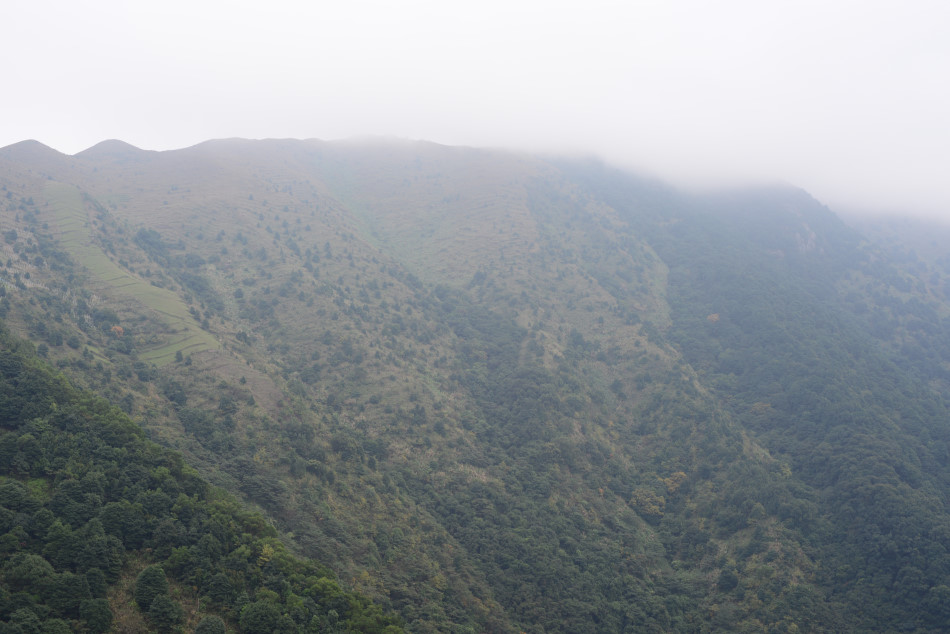 Kwun Yum Shan (觀音山) is sandwiched between Tai To Yan (大刀屻) to the north and Tai Mo Shan (大帽山) to the south.

Heading downhill, visitors can either take a shuttle bus or walk down a winding road.

Along the downhill road, sounds of monkeys can often be heard.  Occasionally visitors may spot monkeys jumping from one tree to another.