After watching the majestic sunset from Pidurangala Rock the day before, we were excited to climb the actual Sigiriya Rock in the next morning.  We get up early in order to arrive at the ticket office of Sigiriya right at 7am sharp.  A short tuk tuk ride dropped us off at the gate of the archaeological park.

Reaching almost 200m above the jungle, the fortress on Sigiriya Rock was the site selected by King Kashyapa (477 – 495 AD) for his new capital.  In 477AD, Kashyapa I seized the throne from King Dhatusena with a coup.  His half brother and legitimated heir to the throne, Moggallana, fled to South India.  Kashyapa moved the capital from Anuradhapura to Sigiriya, where he erected a city around the rock and a fortress/ palace atop the plateau.  Despite the effort of fortifying Sigiriya, the eventually downfall of Kashyapa was inevitable.  He was eventually defeated by Moggallana, who returned to Sri Lanka in 495AD with an Indian army.  After defeating Kashyapa, Moggallana returned the capital to Anuradhapura and converted Sigiriya into a Buddhist monastery which lasted for another 800 years. 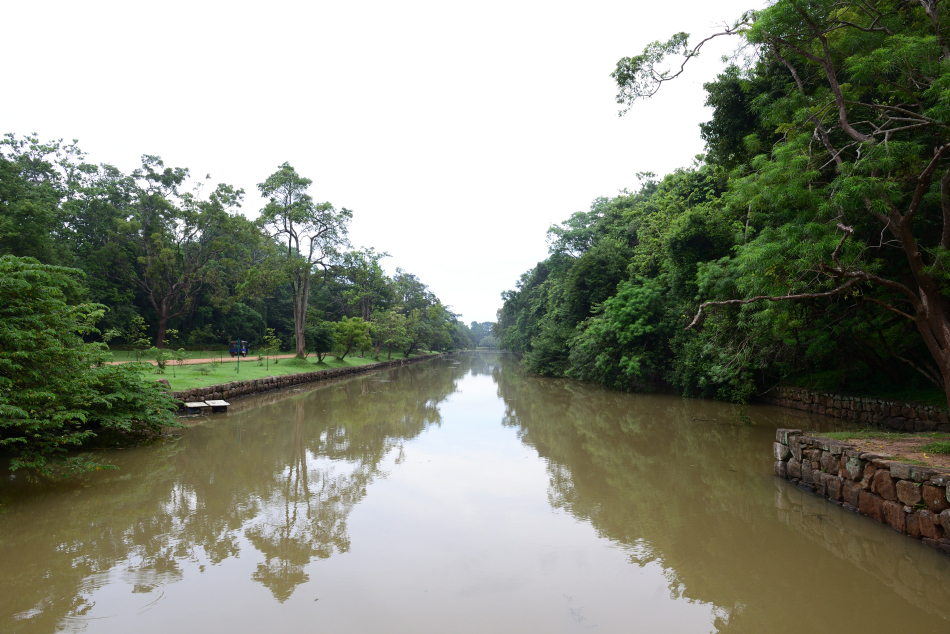 Our tuk tuk passed by the moat of the Sigiriya fortress.

After getting the admission ticket, we entered the archaeological park of the Sigiriya Rock.  The short lived capital of Kashyapa lies pretty much in ruins now.

We did manage to arrive earlier than most tourist groups, and enjoyed a short moment of tranquility at the base of Sigiriya Rock.

Going through the natural triangular gateway, our 1200 steps up the rock officially began.

A few dogs greeted us at the beginning of the ascend.

At midway, we arrived at the Mirror Wall, a 3m wall covered with a glazed material that had been around for over a thousand years. 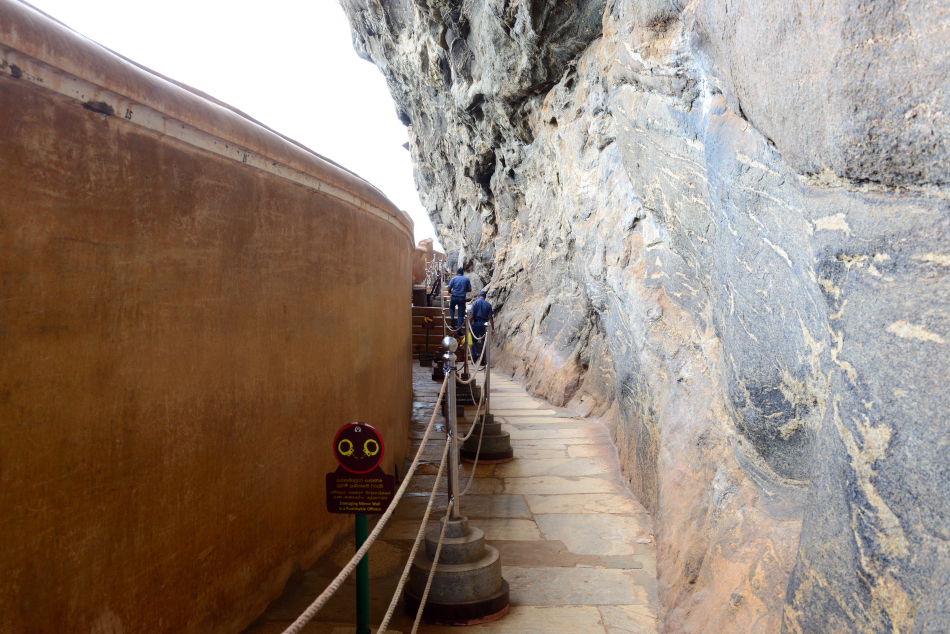 Apart from modern markings, some graffiti on the Mirror Wall date back to visitors between the 6th to 14th century.  These markings remind us that marking graffiti at tourist attractions has been a thousand-year-old habit of humanity. 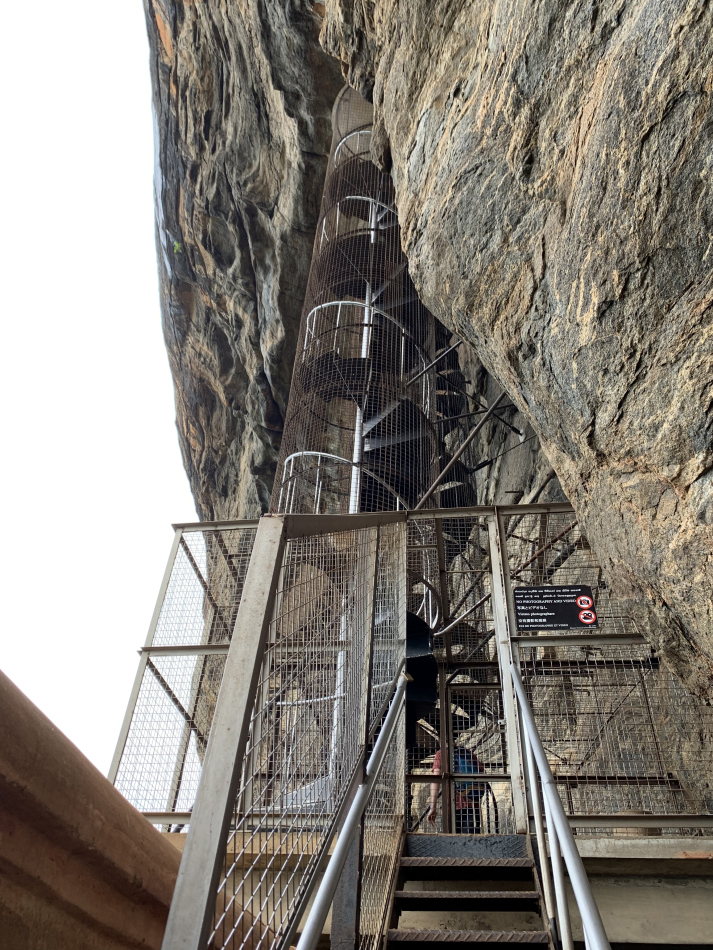 A spiral staircase led us to a series of small caves where the famous ancient frescos depicting a group of beautiful ladies.  It is commonly believe that the depicted ladies are either celestial nymphs or the king’s concubines.  No photography was allowed.

Continued onwards from the caves of frescos, we followed the only stepped path up.

Beyond the lion gate, a narrow stair allowed visitors to ascend in single file.

After some sweat and heavy breathing, we finally reached the top of Sigiriya.  The plateau top is pretty much occupied entirely by the ruins of the fortress/palace.

Looking down to where we came, we could see the central axis of the entry path.

Looking across the jungle, the lush green Pidurangala reminded us of the amazing sunset.

We walked around the ruined fortress for about half an hour.

The view from the top of Sigiriya was not bad, but it was not as stunning as the view from Pidurangala Rock.

After an exhausting morning of climbing the Sigiriya Rock, we returned to the village and prepared for our departure. 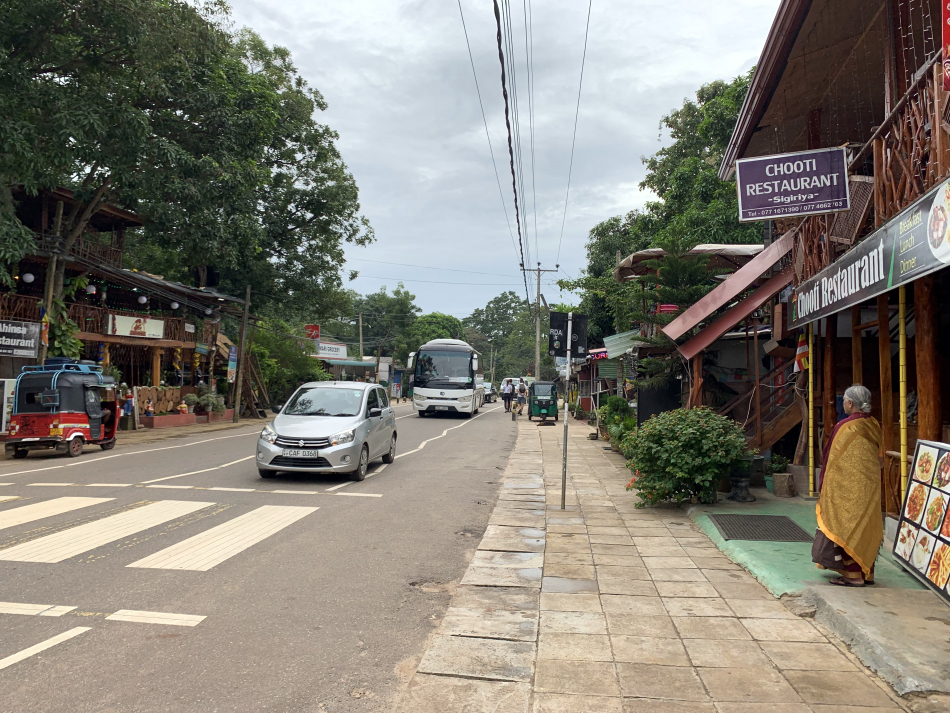 We would move on to Dambulla, a transportation hub in the region which is also famous for its Buddhist cave temples.

Anyone who has done travel research on Sri Lanka would probably come across the dramatic image of the Sigiriya Rock rising above pristine jungle.  Appearing on many travel literature and tourist promotions, the UNESCO World Heritage hilltop fortress atop Sigiriya Rock is on most tourist’s itinerary.  Climbing the nation’s most popular attraction is best done in early morning or late afternoon to avoid getting stuck with the crowds on the narrow stairways.  We decided to visit the hilltop fortress early in the morning.  In the late afternoon prior, we opted for climbing the lesser known Pidurangala Rock.

Rising in the jungle across from the famous Sigiriya, Pidurangala Rock has been gaining huge popularity in recent years because of the impressive view of Sigiriya it offers from the top.  Some travelers even suggest that climbing Pidurangala is more worthwhile than visiting the actual Sigiriya Rock.  After arriving at the village of Sigiriya from Polonnaruwa and had a quick lunch at Chooti Restaurant, we hopped on a tuk tuk to the trailhead for Pidurangala Rock.

A short tuk tuk ride took us to the trailhead in the midst of thick dense forest.  The trailhead is actually located behind Pidurangala Rajamaha Viharaya, a historical Buddhist monastery at the foot of Pidurangala Rock. 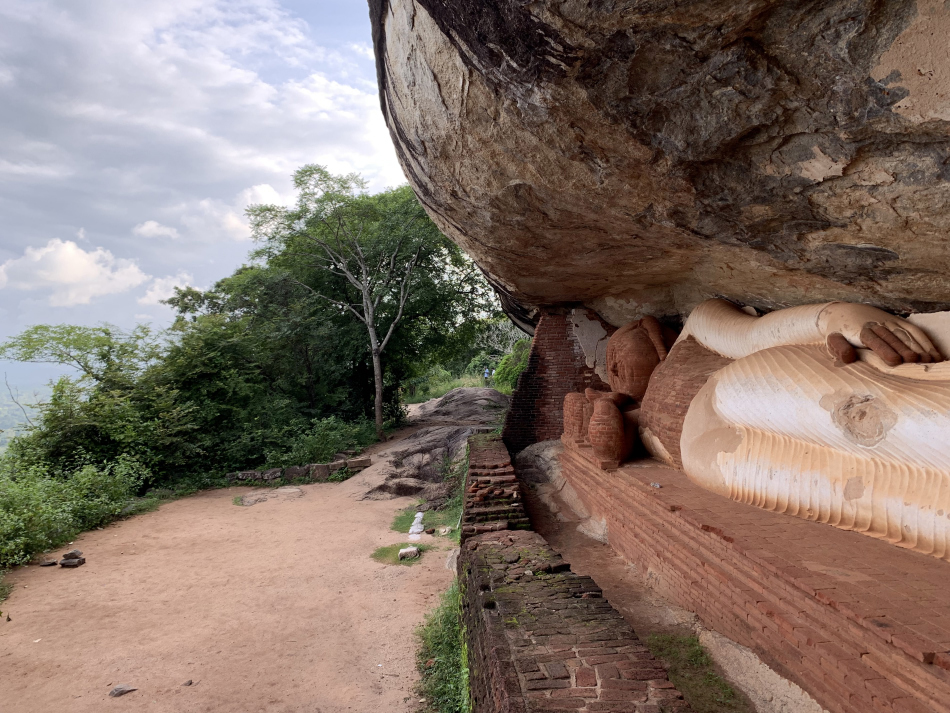 The 20-minute hike up the rock was relatively easy.  Near the top, we reached a large reclining Buddha.  In fact, Pidurangala Rock has been occupied by Buddhist monastery since ancient times.

The tricky part of the hike came at the very top, when we had to scramble up boulders in order to reach the top.

All the sweat of hiking up was more than worthwhile when we saw the scenery of Sigiriya Rock right in front of us. 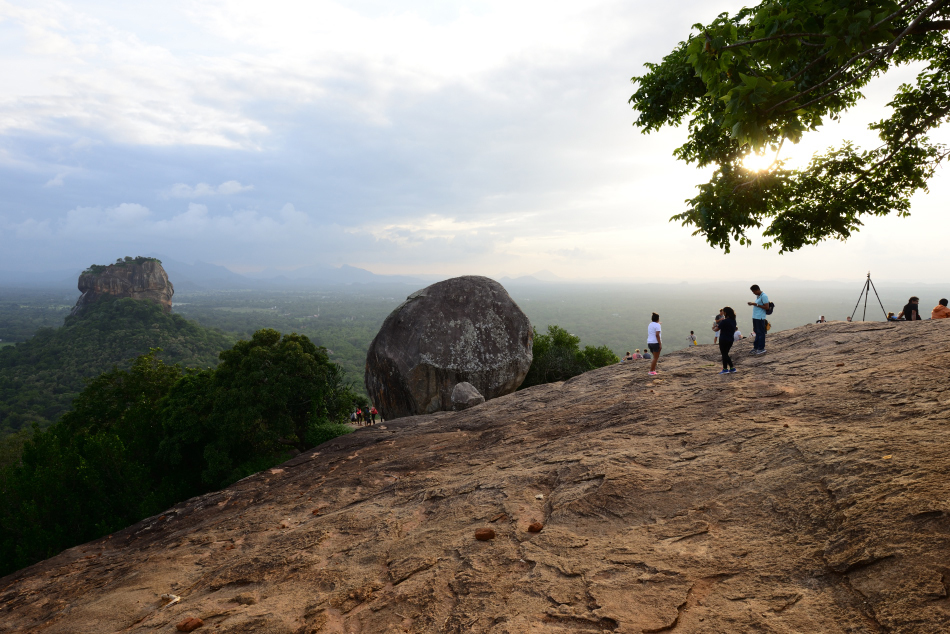 The top of Pidurangala Rock is an open plateau, a perfect spot to watch the sunset.

We could hardly see the fortress on Sigiriya from Pidurangala Rock.

The colour of Sigiriya gradually changed as the sun set. 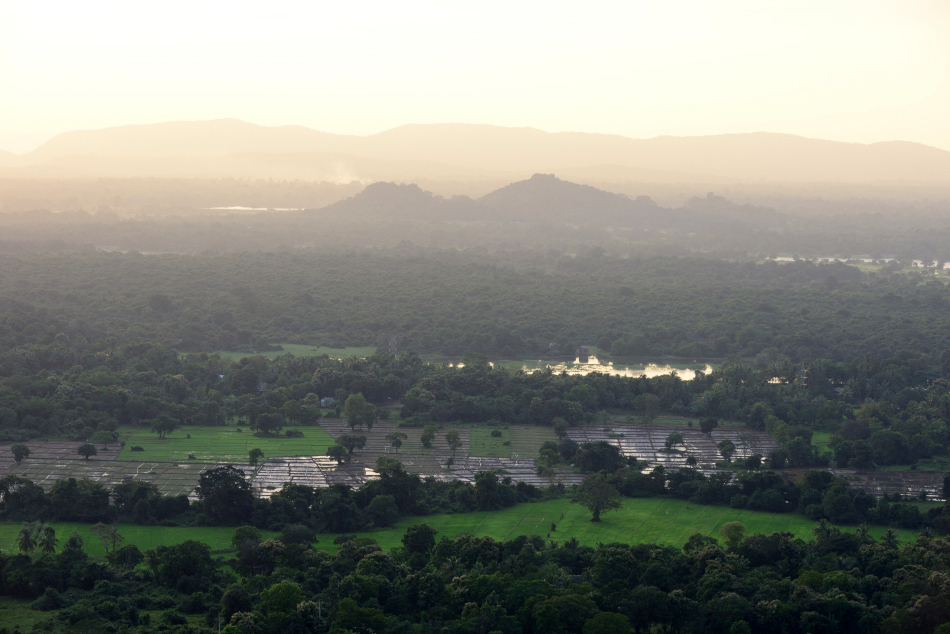 Apart from hikers, a few small dogs wandered around the top of Pidurangala Rock.

We picked a spot to sit down among other tourists to watch the sunset.

Watching the sunset on Pidurangala was one of the most calming experiences we have had among other sunset watching locations we have been to around the world. 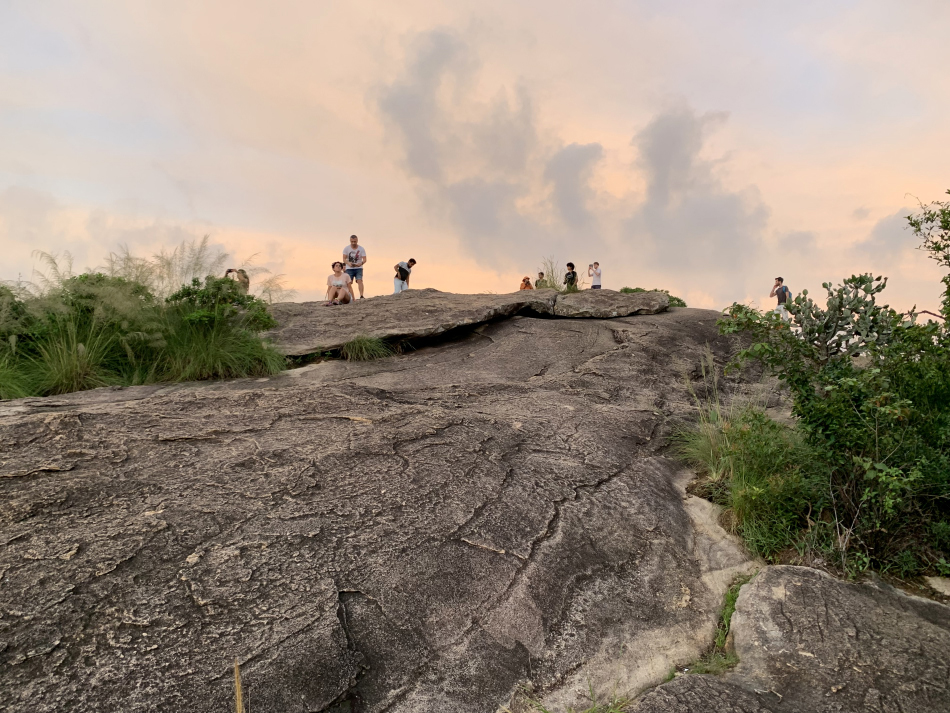 Like most visitors, we stayed till the sun was gone before descending.

It got pretty dark by the time we returned to Pidurangala Rajamaha Viharaya at the base of the plateau.

We exited the monastery and reunited with our tuk tuk driver, who had been waiting for us at the trailhead. 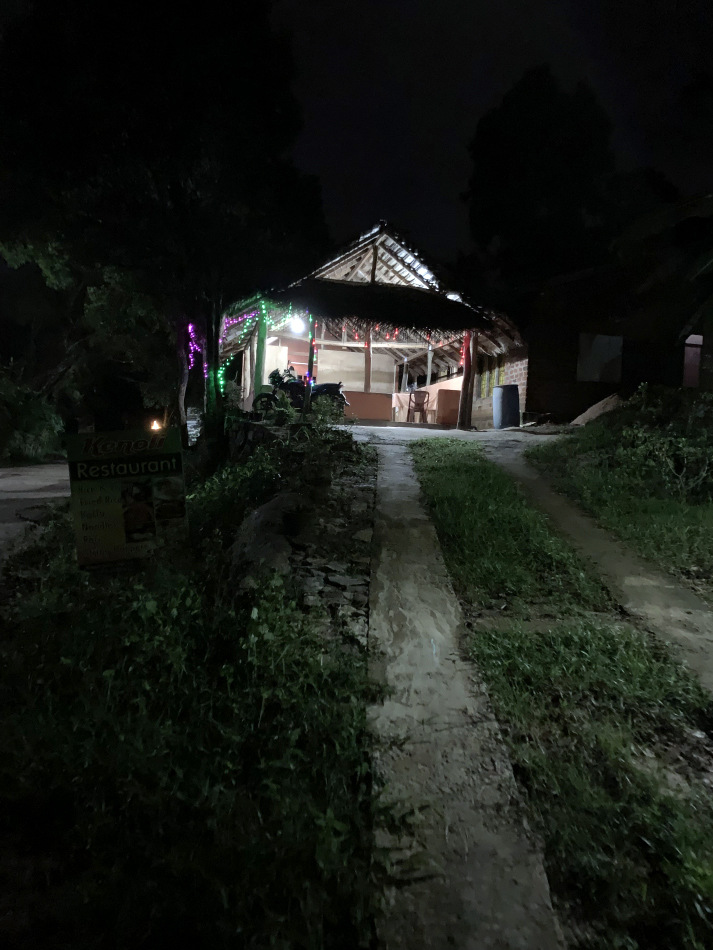 For dinner at Sigiriya village, we picked Kenoli, a restaurant recommended by quite a few travelers online.

The friendly restaurant owners invited us to check out their kitchen, and showed us their cooking techniques. 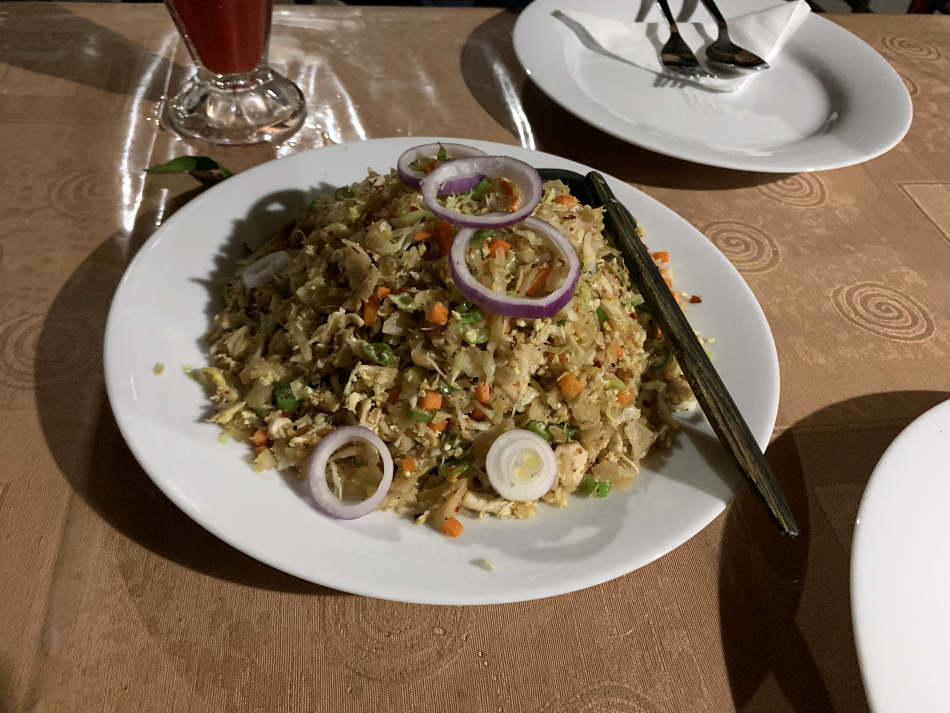 We ordered a chicken kottu, a popular Sri Lankan dish with chopped rotti and chicken meat to complete our eventful day.