As the most sacred Buddhist site in Myanmar, the Shwedagon Pagoda is also one of the liveliest venue where the Burmese gather not only to worship but also to participate in all kinds of social and community activities.  For the locals, Shwedagon is the place to chill out, to date, to spend family time, to chat with friends, to seek for advice from monks, and to mingle with foreign tourists.  For us, the compound was the perfect place for people watching: devoted families worshipping their associated planetary post, kids amusing themselves with bronze bells and ritual tools, women reciting Buddhist mantras, monks meditating in front of the Buddhist shrines, children dressed in traditional costumes attending novitiation ceremony, large number of volunteers sweeping the marble floor, pilgrims lighting up candles and incenses surrounding the central stupa under the setting sun.

The terrace of Shwedagon has long been the centre stage for the people of Yangon.  Since 1920, students, workers, civilians, and monks had took up the terrace to protest against all kinds of social injustice from colonial rule to the authoritarian regime.  The most recent incident was the 2007 nationwide protest for democracy, when tens of thousands of monks and people marched from Shwedagon to the streets of Yangon demanding for change.  Political figures also chose the Shwedagon as the assembly venue, such as Aung San (Aung San Suu Kyi’s father) addressing the mass in 1946 in pursuit of independence from the British, and Aung San Suu Kyi meeting with 500,000 people in 1988 demanding for democracy from the military regime.  Religiously, this huge Buddhist site holds the sacred hair relics of the Buddha.  Socially, the pagoda terrace is the iconic venue for national independence and democracy.  Historically, the Shwedagon is one of the oldest Buddhist monument in the world.  Culturally, the compound contains some of the Myanmar’s most remarkable architecture and national treasures.  With its layers of meanings, the Shwedagon Pagoda is truly a remarkable venue for the people of Myanmar, and the single most important monument that defines the cultural and social identity of the Burmese.

Wearing a Burmese longyi and walking bare-feet on the marble floor of the Shwedagon is an unique Burmese experience for foreigners.

The Shwedagon is a popular place for Shinbyu parades, the traditional novitiation ceremony in Burmese Theravada Buddhism. 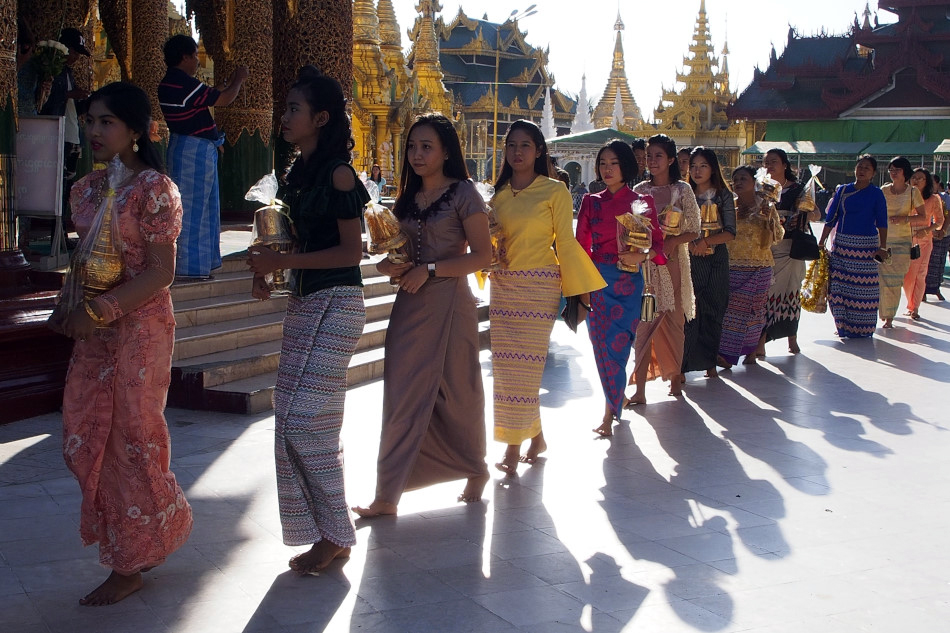 Throughout our visit, we saw a few Shinbyu parades at the marble terrace of the Shwedagon.

The Shinbyu parades offered us some of most remarkable moments of people watching.

At Shwedagon and elsewhere in Myanmar, gold is warmest colour.

Many pilgrims would light up candles and incenses at the altar around the central pagoda. 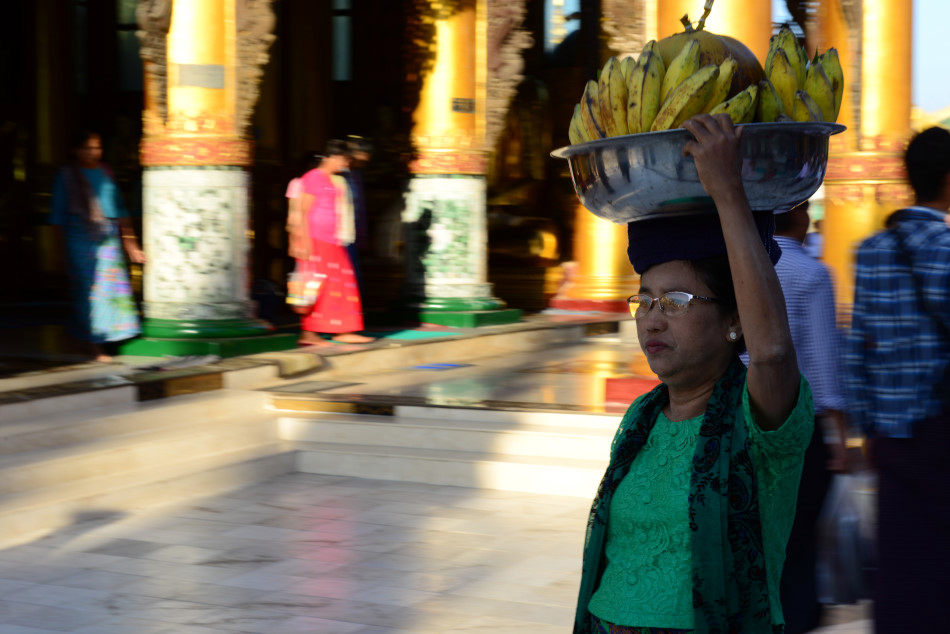 Meditation is a typical practice for Buddhists, and a common sight at Shwedagon.

Young children seemed enjoying themselves at the terrace while their parents were busy worshipping.

A kid trying out the bronze bell. 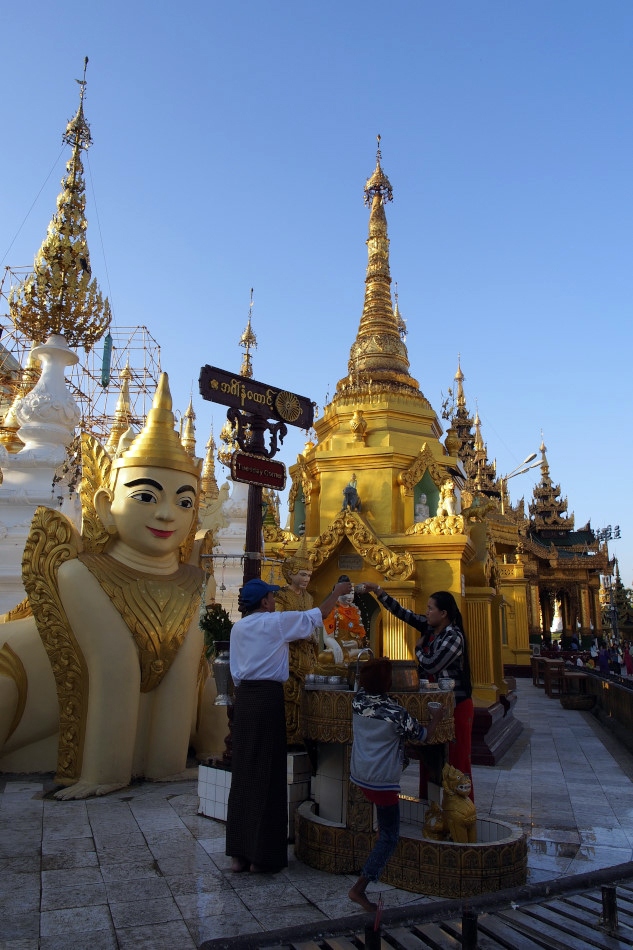 A devoted family worshipping at one of the planetary post at the base of the central pagoda.

A group of women reciting Buddhist mantras in front of a reclining Buddha. 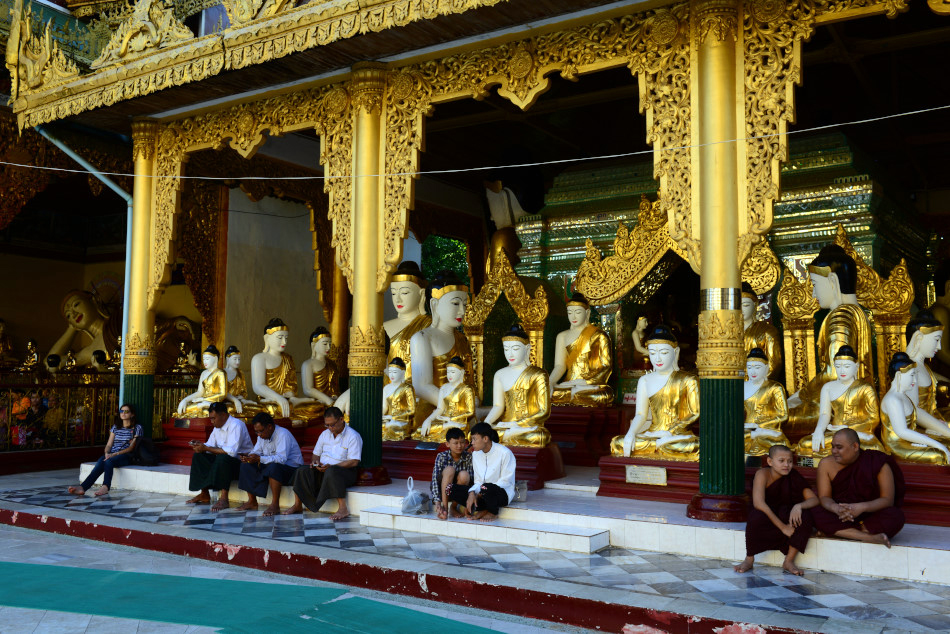 Visitors and monks resting among figures of sitting Buddha.

Volunteers collectively sweeping the marble floor was a unique scene for us. 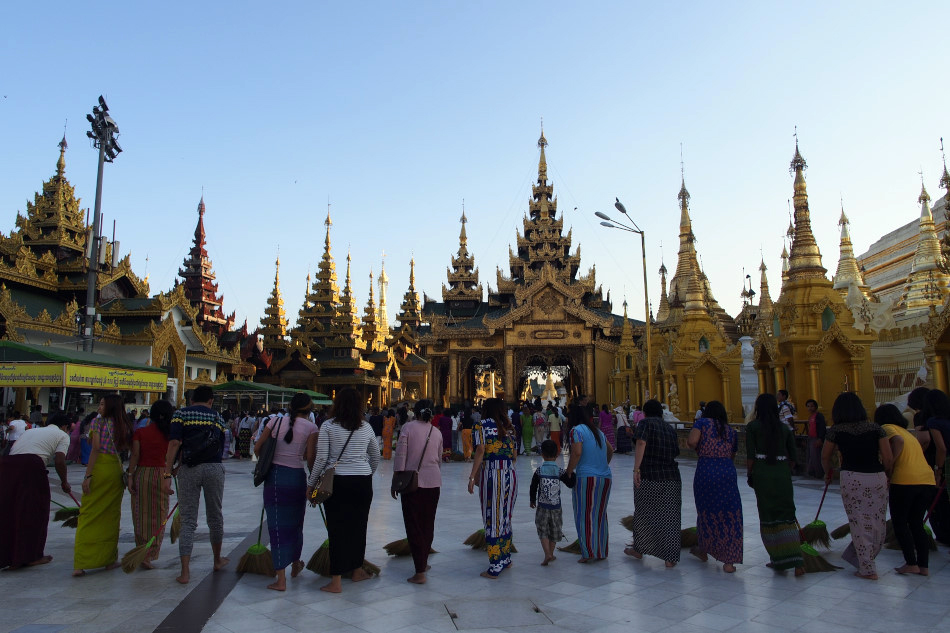 The volunteers formed a line and walked at the same pace to sweep the floor.  During our visit, we saw the sweeping group several times at different locations in the compound. 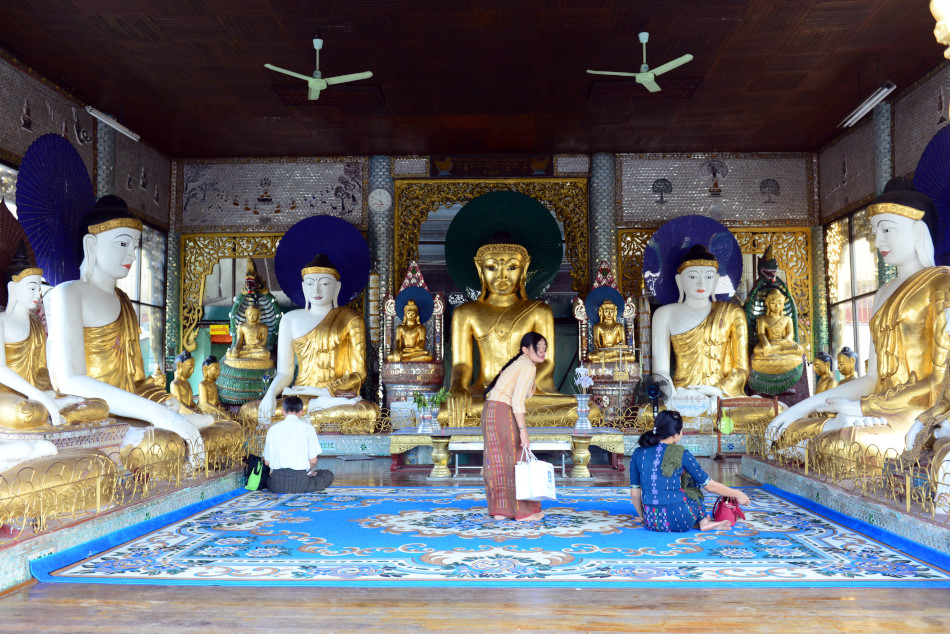 Away from the main circulation space, some worship hall were less crowded, allowing visitors to meditate quietly.

Near sunset, many gathered at the open space in front of the Photo Gallery northwest of the central stupa. 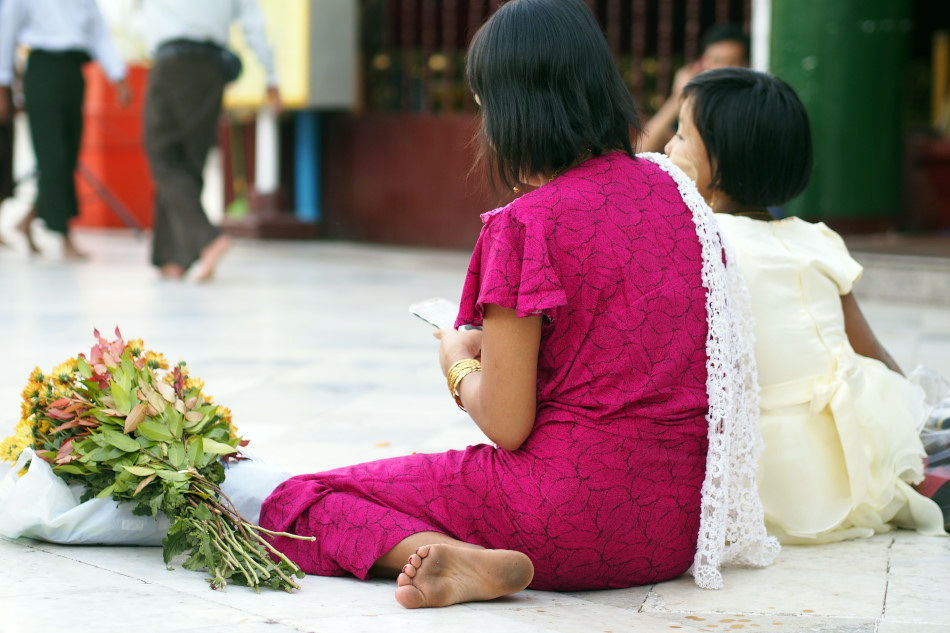 We also saw a large group of what looked like to be the Wa people.  The Wa is an ethnic minority group living in Northern Myanmar and Southwestern China. 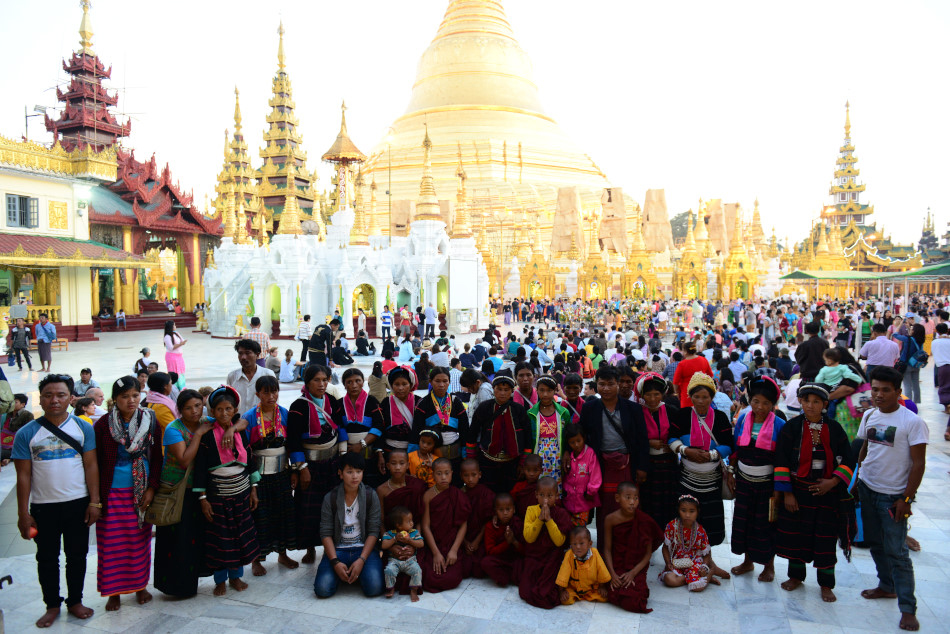 Myanmar is ethnically diverse, with 135 ethnic groups officially recognized by the government.