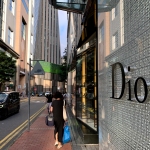 Wandering the most popular shopping streets of Causeway Bay, it is impossible not to stumble upon streets or places that are named after either a tai-pan (business executive 大班) of Jardine Matheson (怡和洋行) or the family of Lee Hysan (利希慎). Paterson Street (百德新街), Jardine’s Bazaar (渣甸街), Jardine’s Crescent (渣甸坊), Yee Wo Street (怡和街), Percival Street (波斯富街), Matheson Street (勿地臣街), Keswick Street (敬誠街) all refer to the former executives of Jardine Matheson, the giant enterprise that is involved in almost all major business sectors one could think of in Hong Kong; while Lee Garden Road (利園山道), Hysan Avenue (希慎道), Lan Fong Road (蘭芳道), Hysan Place (希慎廣場), Lee Garden One to Six (利園一至六期), and Lee Theatre Plaza (利舞臺廣場) can be traced back to the family of Lee Hysan, the biggest landlord of today’s Causeway Bay. And, what did Jardine Matheson and Lee Hysan had in common apart from owning most of Causeway Bay for the last 180 years? The answer is OPIUM.

No matter we like it or not, the founding of Hong Kong is inseparable with the opium trade. It was the consequences of the two Opium Wars that Hong Kong Island and Kowloon were ceded to Britain. It was the opium trade that first brought wealth to the city. It was the opium trade that brought in investments to develop Hong Kong as the most efficient port city in the region. Soon after becoming a British colony, Hong Kong emerged as the world’s official hub of opium trading and processing. By mid 19th century, three quarters of Indian opium were being handled in Victoria Harbour, and 40,000 chests of opium (worth 16 million pounds sterling at that time) were stored in the city on average at anytime. Due to the trade of opium and other products such as tea and silk, there was a large demand for godowns (warehouses) along the harbour. On 14 June 1841, less than 6 months since the British began their rule, the first lots of land were sold in Hong Kong. For 565 pounds sterling, Jardine Matheson & Co. (怡和洋行) bought 5,309 sq.m of land in East Point to set up their first offices and godowns in the colony. Their office was set up at Lot No. 1, where the former Excelsior Hotel (怡東酒店) stood in modern days. Formed in 1832 by William Jardine and James Matheson, Jardine Matheson traded tea, cotton, silk, and also opium in the Canton area. After settled in Hong Kong, it soon grew to become the largest foreign trading company in the Far East. In the following decades after purchasing their first lots of land, the company continued to expand their headquarters in the area, building godowns, wharves, offices, factories, houses for ships and crews, and infrastructure across Causeway Bay. In 1872, Jardine Matheson ended its involvement in the opium trade after acquiring enormous profits. In the next 150 years, the company continues to diversify itself into the present Fortune Global 500 company, with a huge business portfolio both in Hong Kong and abroad: shipping, railway, real estate (Hongkong Land), hotels (Mandarin Oriental), ice and dairy (Dairy Farm), Hongkong Tramway, Star Ferry, aviation management (Jardine Aviation Services), motors (Jardine Motors, Jardine Cycle and Carriage, Astra International), export and import, banking, cotton spinning, textile manufacturing, sugar refinery, construction (Gammon), food industry (Maxim’s Caterers, Pizza Hut HK), retail (7-Eleven HK, IKEA HK), engineering (Jardine Engineering Corporation), insurance, beer brewery, cold storage… and the list just keeps on going.

Seven years after Jardine Matheson stopped their opium trade, Lee Hysan (利希慎) was born in Hawaii in 1879 into the family of Lee Leung-yik (利良奕), a businessman who obtained great wealth in the Hong Kong’s opium trade. After working as a teacher, interpreter, bank staff, timber factory owner, and shipping company manager, Lee Hysan took over his father’s business, and became a highly successful opium trader, earning him the nickname Opium King. In 1923, Lee Hysan bought the land of Jardine’s Hill (East Point Hill) from Jardine Matheson for the sum of HK$3.8 million. Roughly defined by today’s Percival Street, Lee Garden Road, Yun Ping Road, Leighton Road, and Lee Theatre, this huge piece of land was named Lee Garden (利園山) and intended to host a series of opium refinery facilities. Soon international opium trade was banned, Lee and his family turned to other ideas for the land. In 1925, Lee Garden Amusement Park (利園遊樂場) opened its doors on East Point Hill, becoming the first crowd puller of Causeway Bay. But it was the adjacent Lee Theatre (利舞臺) at 99 Percival Street that proved to be the crowd’s favorite. Opened in 1927, the 2000 seats theatre soon became the city’s primary venue for Chinese operas, and later for movies (first being Charlie Chaplin’s The Great Dictator in 1940), concerts, and live shows such as the Miss Hong Kong Pageant. After screening Arnold Schwarzenegger’s Terminator 2: Judgment Day, the iconic theatre was demolished in 1991 to make way for Lee Theatre Plaza (利舞臺廣場), a 25-storey retail and restaurant complex. Apart from theatre and amusement park, the Lee family also established Lee Garden Restaurant, Lee Garden Hotel, and a number of residential and office developments in the area, after blasting away the rocky East Point Hill bits by bits since 1953. The last bit of flattening work was completed during the construction of Hennessy Centre (興利中心), the former 41-storey office complex where Mitsukoshi (三越) Department Store was located. The site was redeveloped again in 2006 and reopened as the new 40-storey landmark called Hysan Place (希慎廣場). Today, many developments at Lee Garden are still under the Lee family’s control, including commercial complexes Lee Garden One to Six, Lee Theatre Plaza, and Hysan Place.

East Point was the heart of Hong Kong’s opium trade and almost became home of the city’s biggest opium refinery facility. But as the story unfolded, it eventually evolved into the city’s most well known shopping district: Causeway Bay, and become one of the world’s most expensive retail market. With four prestige Japanese department stores anchoring the lands of Jardine Matheson and Lee Hysan, Causeway Bay was nicknamed “Little Ginza” in 1980’s. Today, hardly any Hongkonger could connect their beloved shopping paradise with the lucrative trade of poppy tears.