In the early 20th century, philosophy professor Kitaro Nishida (西田幾多郎) walked along the Shishigatani Canal daily to his office at Kyoto University.  Specialized in bridging philosophies of the East and West, Kitaro Nishida considered his daily commute as a way of Zen meditation.  In honor of this famous Japanese philosopher, this canal-side path is named as Tetsugaku no michi (哲学の道) or the Philosopher’s Path today.  This tranquil stone path runs north-south, linking a number of peaceful neighborhoods and temple grounds, from the neighborhood of Nanzenji Temple (南禅寺) to Ginkakuji Temple (銀閣寺) at the northern end.  In spring, the cherry-lined path is a highly popular venue for hanami or cherry blossom viewing events.  In autumn, the maples transformed the otherwise lush-green path into a colourful passage.  Occasionally lined with cafes, shops, restaurants and galleries, the Philosopher’s Path offers the best way for travelers like us to explore the Northern Higashiyama on foot.

After our visit at Nanzenji, we followed street signage, passed by the well known Eikando Temple (永観堂) before reaching the starting point of the Philosopher’s Path.  We walked rather slowly and spent over an hour on the 2km path.

We passed by the gate of Eikando Temple (永観堂) enroute to the Philosopher’s Path.  Eikando Temple is another popular spot for viewing of autumn foliage. 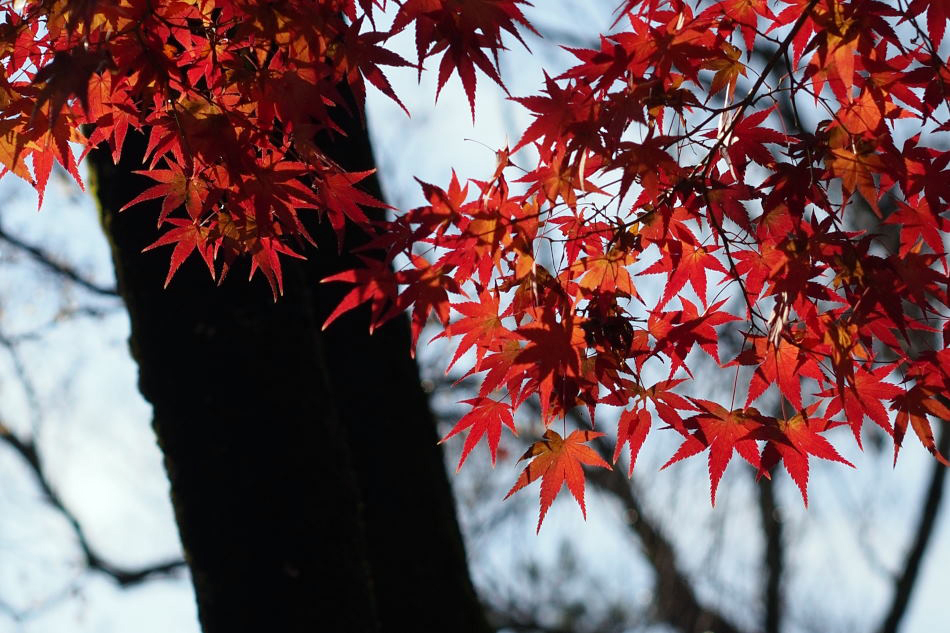 Despite online information stated that the autumn foliage at Eikando Temple (永観堂) had well passed its peak, there were still a number of beautiful maple trees in the temple’s forecourt.

We wandered in the forecourt of Eikando Temple (永観堂) for a bit but decided to move on to the Philosopher’s Path.  We came to Kyoto a week too late for the peak autumn foliage at Eikando, Shinshogokurakuji (真如堂) and Konkaikomyoji (金戒光明寺) in this area, so we rather saved these till next time.

The residential street with a vista of the Higashiyama Mountains led us to the starting point of the Philosopher’s Path.

Some kind of red berries by the street added a bit of Christmas mood to our stroll.

The beginning portion of the Philosopher’s Path is a tree lined pathway along the Shishigatani Canal.

An old abandoned wagon by the path was used as a cozy home for several cats.

One of the cats was sunbathing near the wagon. 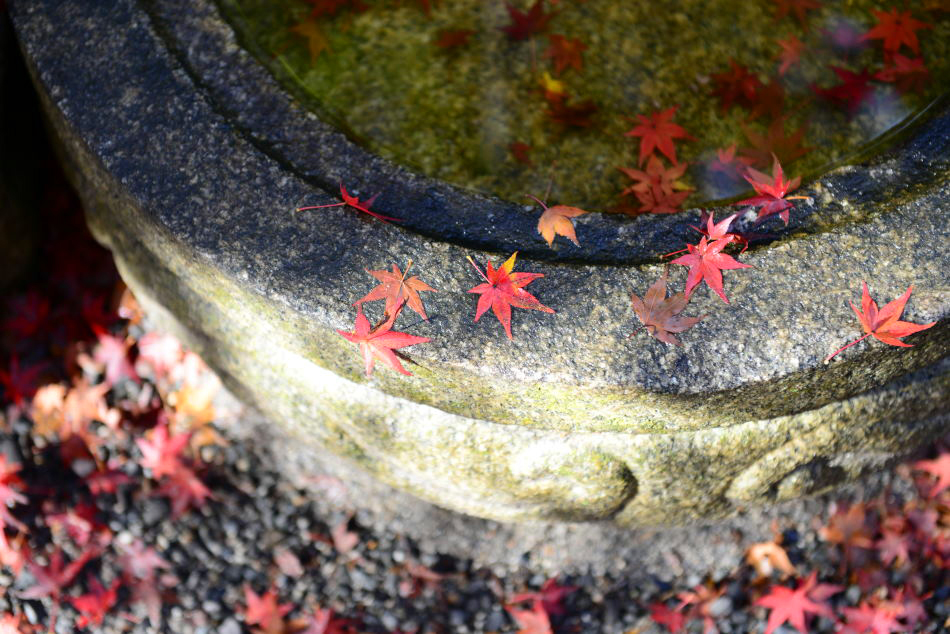 Autumn leaves in a stone basin by the path.

Despite autumn was almost over, the vivid foliage was still impressive at many spots.

The Shishigatani Canal provided perfect reflection of the peaceful scenery. 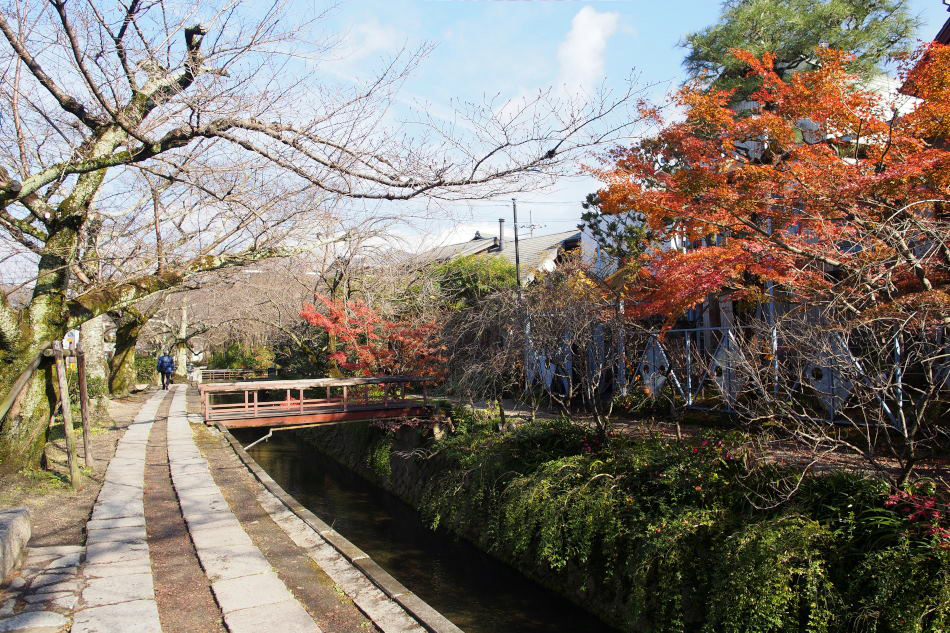 The air was cool and crisp.  Under the mid-morning sun we walked slowly along the waterside stone path towards Ginkakuji Temple.

Water channels were everywhere, and some were even lifted up bridging over the Shishigatani Canal.

The autumn palette made everything seemed so lovely.

For most of the walk we were passing through sleepy residential neighborhoods.  While most houses looked traditional Japanese, this round one we passed by looked totally out of this world to us.

After passing by several cafes and eateries, we finally decided to stop by a traditional rice cake shop. 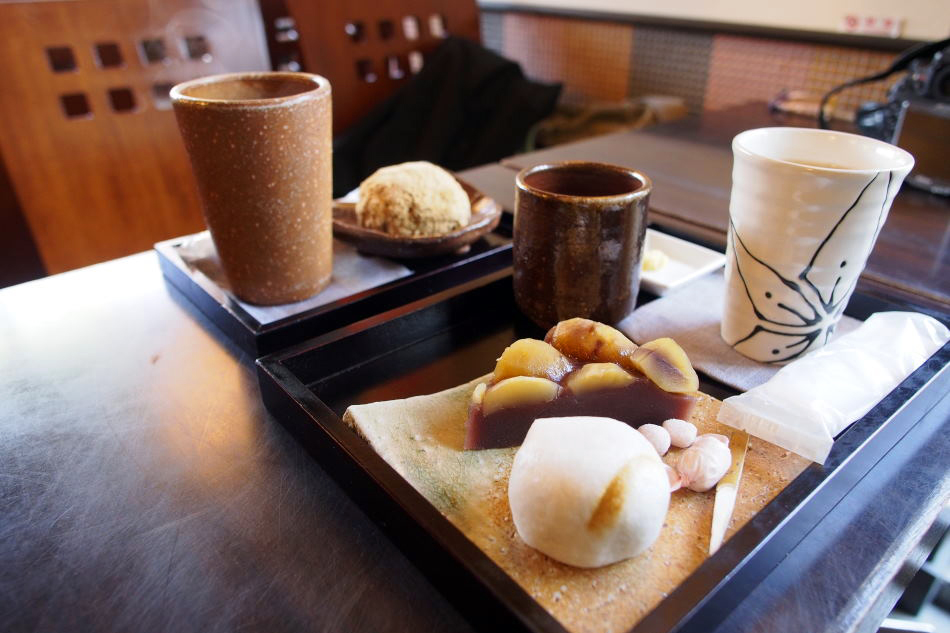 We ordered mochi, chestnut rice cake, black-bean tea and amazake(甘酒), a type of traditional sweet drink made with fermented rice.

Just as we left the Philosopher’s Path to make a detour to the Honenin (法然院), we passed by a private home with a healthy orange tree.