In Kennedy Town, less than three hundred meters from Smithfield Municipal Market and Forbes Street Playground (site of the former slaughterhouses), a sleepy neighbourhood has been tucked away on a quiet hill slope for a hundred years. A staircase on Sands Street is all it takes to separate the two worlds, one bustling and the other tranquil. Once consisted of seven terraces built on the slope between Hong Kong University above and Belcher’s Street below, the secluded neighbourhood is commonly known as the Seven Terraces of Sai Wan (西環七臺). Also called Western District, “Sai Wan” is the general name for the area encompassing Kennedy Town (堅尼地城), Shek Tong Tsui (石塘咀) and Sai Ying Pun (西營盤). The seven terraces can be traced back to Li Sing (李陞), the richest Chinese merchant in 19th century Hong Kong. One of his sons Li Po Lung (李寶龍) inherited the sloped land when his father died in 1900. Li Po Lung decided to develop the land into residential terraces and an amusement park. He named the terraces and amusement park with references to his favorite ancient Chinese poet Li Bai (李白). Chinese pavilions, outdoor stages, dance floors, merry-go-round, playgrounds, and even an artificial pond for rowing boats, coupled with street performances, handicraft fair, small fireworks, chess competitions, etc. made Tai Pak Lau (太白樓), Li’s amusement park, into a trendy destination from 1915 and on. It was especially popular with wealthy men and prostitutes coming from the nearby Shek Tong Tsui (石塘咀), the city’s most famous red light and entertainment district in early 20th century. Just like many places in Hong Kong, Tai Pak Lau was rather short-lived, lasting for merely nine years before closing down due to financial difficulties of Li Po Lung. The park was then converted into today’s Tai Pak Terrace (太白臺) residential street. Despite the bankruptcy of Li Po Lung in 1924, the seven terraces, especially the topmost terraces such as Academic Terrace (學士臺), To Li Terrace (桃李臺) and Ching Lin Terrace (青蓮臺), continued to thrive as an upscale residential neighbourhood for wealthy Chinese.

If Tai Pak Lau was an ephemeral dream of a wealthy man, the historical Lo Pan Temple (魯班先師廟) on Ching Lin Terrace (青蓮臺) has proven to be a much more resilient establishment. Listed as a Grade 1 historical building, Lo Pan Temple was erected in 1884 by the Contractor Guild, way before Li Po Lung laid hands on the area. The temple construction was supported by 1172 donors, mostly contractors and builders from all over Guangdong (Canton) and Hong Kong. The temple is the city’s only religious establishment solely dedicated to Lo Pan, the patron saint for all Chinese contractors and builders. Lo Pan (魯班) or Lu Ban in Mandarin, was a renowned structural engineer, inventor, carpenter, builder and craftsman in the Spring and Autumn Period in China. During his lifetime, (507 – 444 BC), Lo Pan was responsible for inventing a variety of tools from the saw and prototype of a kite, to military tools and seige ladder used in warfare. Lo Pan was considered to be the master of all craftsmen in the Chinese culture, and has become a deity and patron saint for all contractors.

Maintained by a very old temple keeper “Uncle Fun” (芬叔) in his late 90s, Lo Pan Temple (魯班先師廟) is a remnant from a distinct past, a time when traditional values in the three general construction trades (三行), namely carpentry, cement work, and paint work, were strong. In the old days, paying respect to Lo Pan was a common routine to start the day for all contractors. They would celebrate Lo Pan’s birthday, on the 23rd of June in the Lunar Calendar, with heart beating drums and dragon dances, and share a big pot of “Lo Pan meal” (魯班飯). It was the contractors’ respect to the Lo Pan heritage that has sustained the temple to the present day. Even “Uncle Fun” is serving his temple keeping responsibility out of appreciation for his former patron saint, after a 60-year career in the paint trade until retirement at 80. Working together with architectural conservationist and master carpenter Wong Hung Keung (王鴻強), Uncle “Fun” was also involved in the temple’s major renovation in 2007, repairing structural damages and restoring some of the magnificent wall paintings, stone carvings, and clay sculptures that make Lo Pan Temple one of the most precious architectural gem in Hong Kong.

Founded by Konchok Gyelpo in 1073, Sakya Monastery is the seat of Sakya school of Tibetan Buddhism. During its heyday in the 13th and 14th centuries, Sakya abbots were the actual governors of Tibet under the Mongol’s rule.  There are actually two monasteries in Sakya at either side of Trum-Chu River.  While the older north monastery (1073) with its 108 structures has been reduced to ruins over the years, the fortress like south monastery (1268) survives and remains as one of the largest in Tibet.  The impressive fortress like monastery washed with ash grey and white and red vertical stripes symbolizes the trinity of Bodhisattva, and had became the symbol of Sakya.  Everything at Sakya is large in size, from its 16m high main assembly hall to the extensive defensive walls.

Many refers Sakya Monastery as Dunhuang (敦煌) of Tibet because of its remarkable murals, artefacts, and medieval scriptures.   Sealed behind a wall and rediscovered in 2003, the 60m long by 10m tall library wall (拉康欽莫大經堂) behind the altar in the main assembly hall is particularly impressive.  It contains a huge variety of text, 84000 in total, made of different materials and about different subjects from the Yuan Dynasty when Tibet was under Mongol rule.  The equally important murals made in the Mongolian style are also a rarity in China nowadays.  In the main assembly hall, the most valuable object is probably the white conch shell (海螺).  Legends has it that the conch shell originally belonged to the Buddha.  Then it went into the hands of an Indian king, and later became an offering to Kublai Khan (忽必列).  Kublai Khan gave the sacred object to Sakya and it remained in the monastery until present day.  Still capable to make a soft low sound, the conch is still blown by the monk to give blessing to pilgrims.  While we were visiting the main assembly hall, we did see a monk took out the conch to offer blessing to the pilgrims, who were so excited and eager to get as close as possible to the sacred object.  Also from Kublai Khan was one of the huge wood columns in the assembly hall.  With a diameter ranging from 1m to 1.5m, these wood columns are quite impressive disregard who its donor might be.

As soon as we arrived in Sakya, our driver Sangzhu took us to the large dining hall of Manasarovar Sakya Hotel Restaurant for lunch. 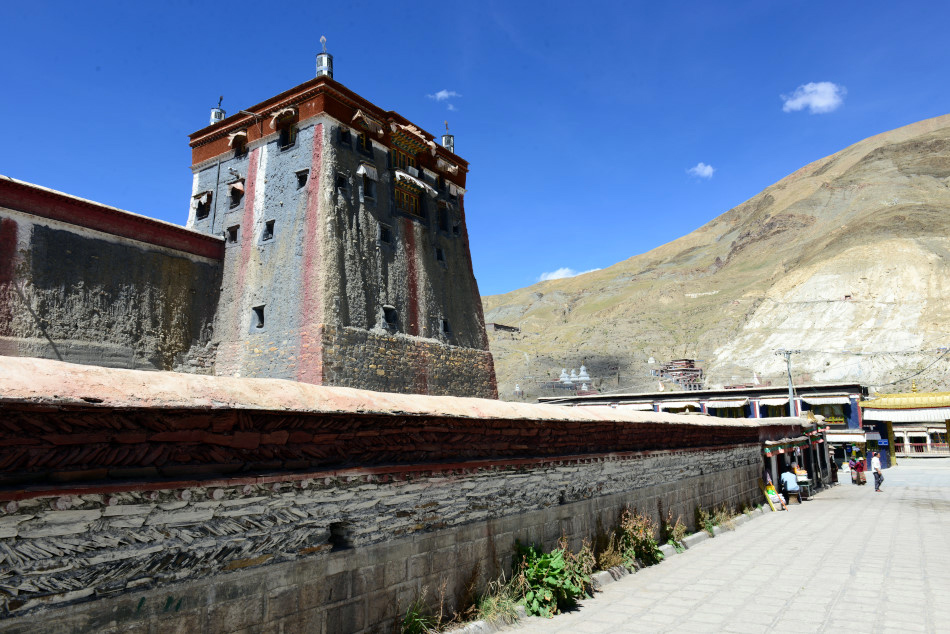 Unlike most other Tibetan monasteries, Sakya’s grey walls with red and white stripes offer a unique visual symbol for Sakya in the past 900+ years.

We headed into the entrance courtyard of Sakya and soon found out that almost all buildings were locked.  Apparently the monks were having lunch somewhere else and we had no choice but to wait for their. 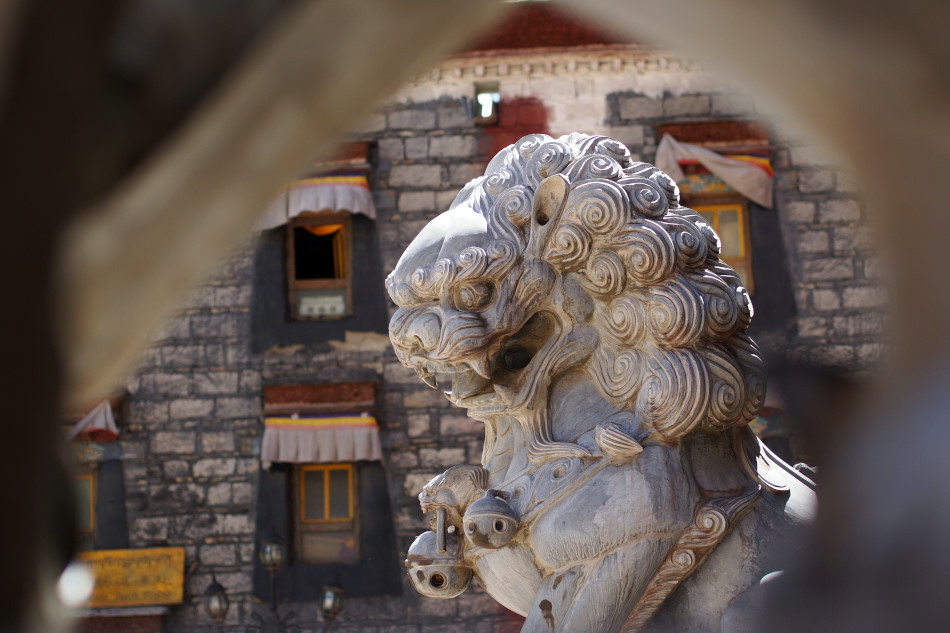 In front of the main assembly hall, we stood by the stone lion and wait for the monk’s return. 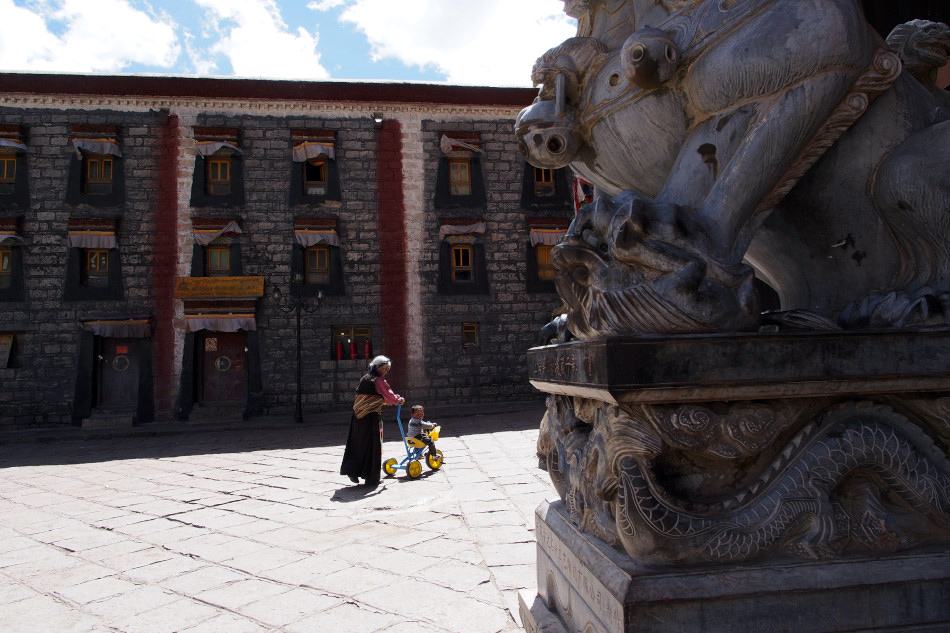 Soon more local visitors arrived and waited for the monk’s return.  We decided to take a walk in the enormous compound.

We followed the long and narrow kora route around the central complex.  There were prayer wheels on one side and the defensive high walls on the opposite.

The buildings in Sakya Monastery all seemed really large to us. 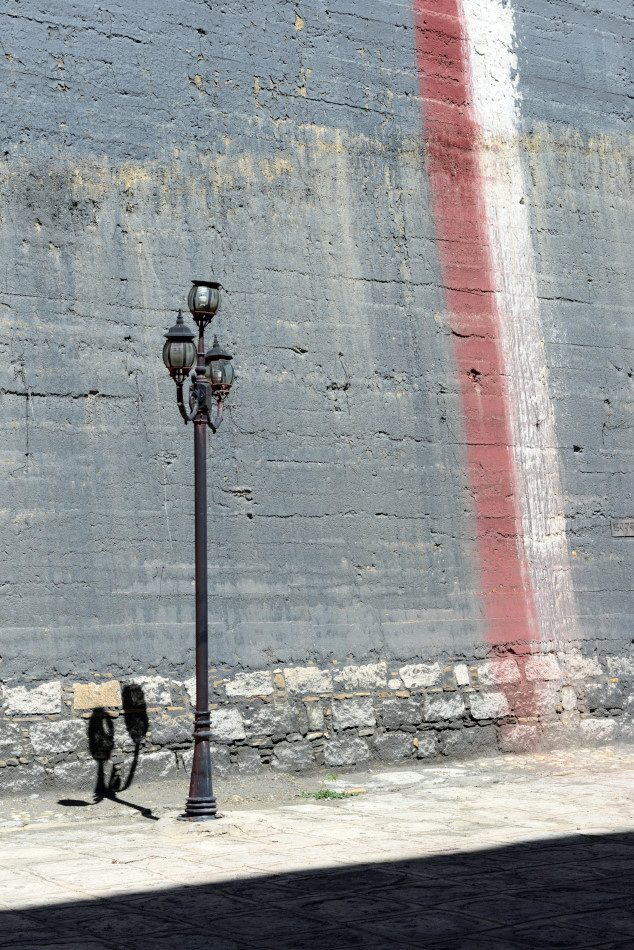 The Western style lamppost and the ash grey wall with red and white stripes somehow didn’t seem too coherent visually.

At last the monk with the keys showed up and led us into the inner monastery.

Beyond the gate, a dark hallway with beautiful murals and old prayer wheels led us into the inner courtyard. 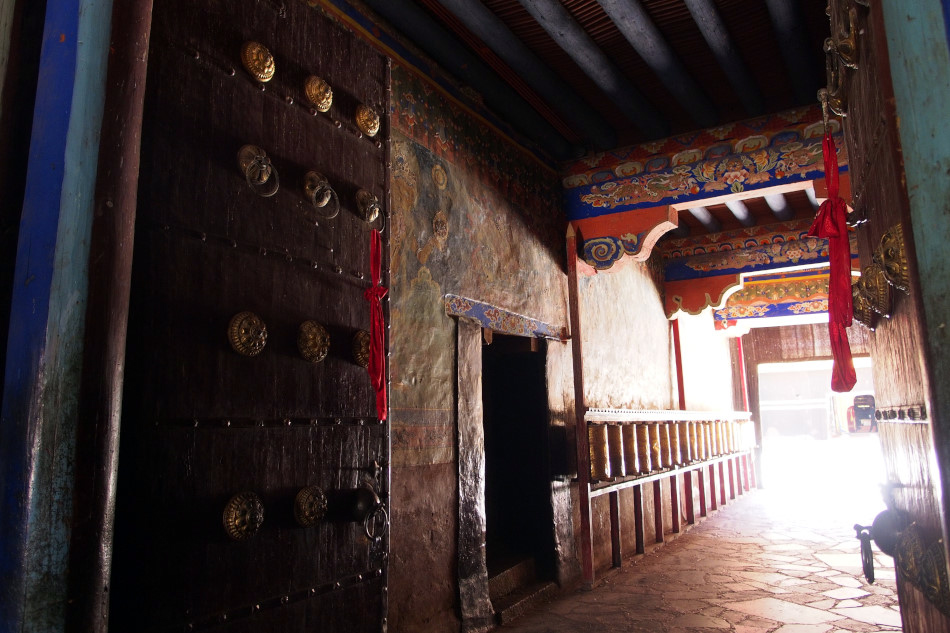 Going through the dark hallway with religious murals on both sides felt like going back in time.

Without extensive renovations, many murals in Sakya were gradually fading.

From the inner courtyard, we walked into the main assembly hall.  In the main hall, we saw the famous white conch shell, wood columns, historical murals and most impressive of all, the 10m high library wall behind the altar.  Just like most other monasteries in Tibet, photography of the interior is prohibited.

After seeing the interior of the main assembly hall, we climbed the adjacent stair up to the flat roof of the complex.

The flat roof offers another unique angle to admire the robust architecture of Sakya. 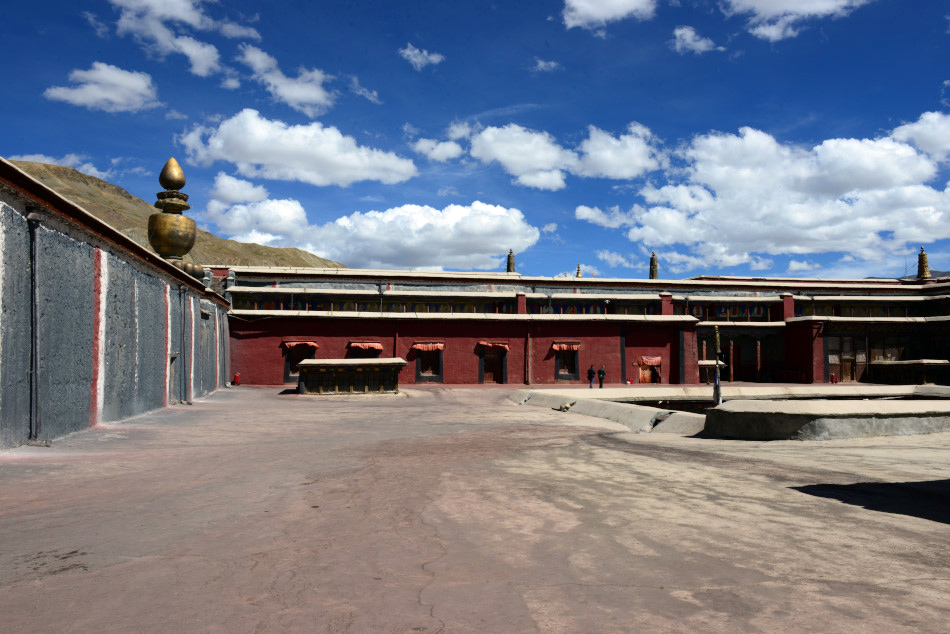 Via the flat roof, we could walk to a variety of side chapels. 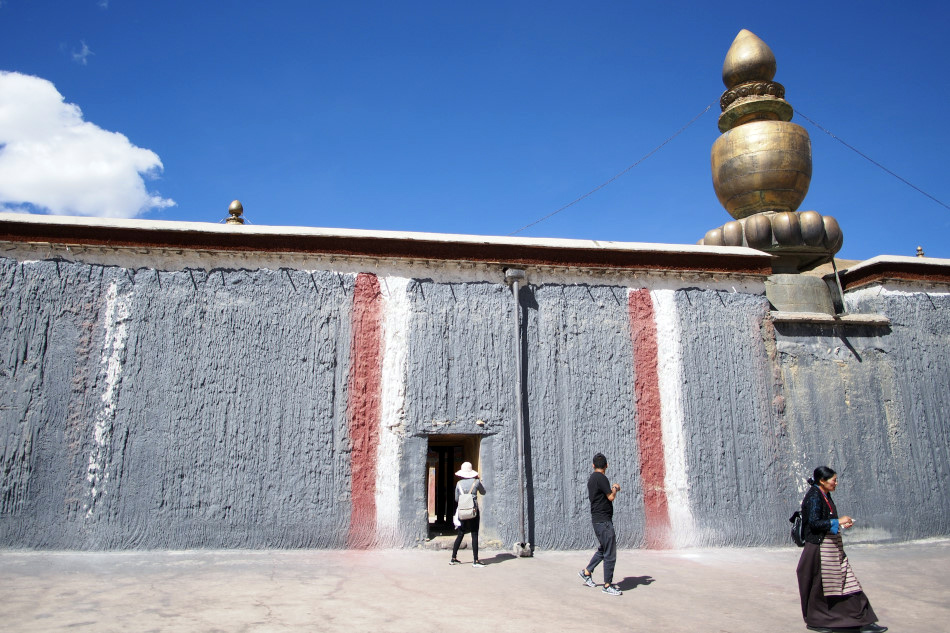 The small chapels are accessible via doorways in the otherwise fortress like walls. 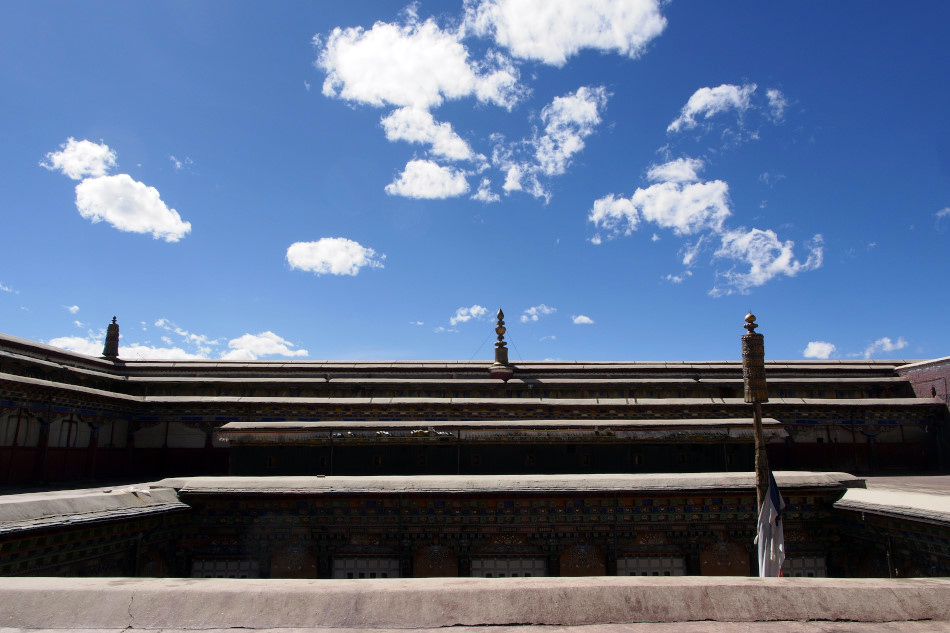 Layers of eaves form a series of interesting lines on the flat roof. 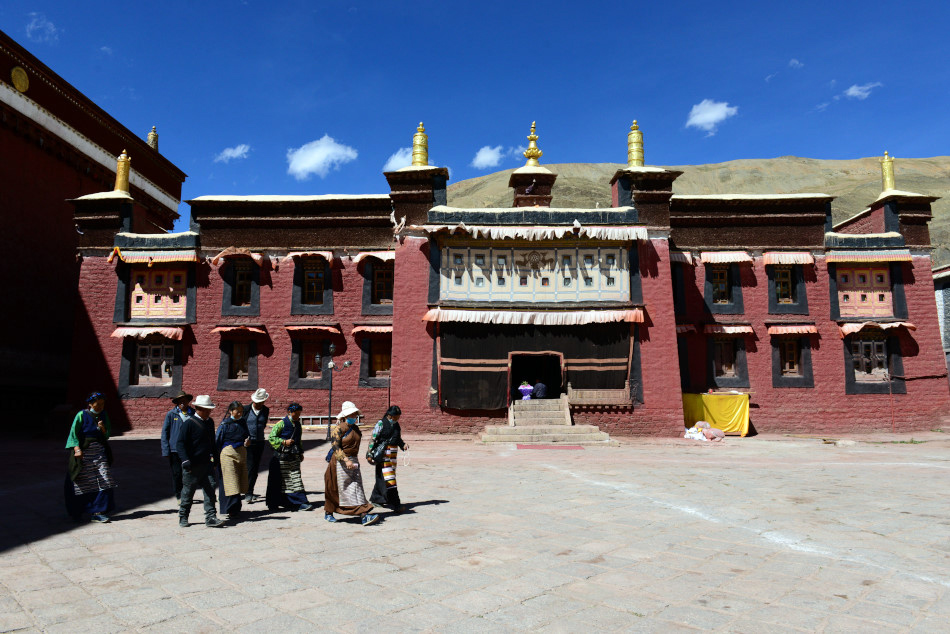 As we departed from Sakya Monastery, more pilgrims arrived to pay respect to this once most powerful monastery in Tibet.