On our last evening of the trip, we had a few hours to spare in Colombo before heading to the airport.  From online research, we learnt about the widely acclaimed seafood restaurant Ministry of Crab, which is famous for their giant lagoon crabs caught in the mangrove lagoons of Sri Lanka, and prepared in a selection of Asian cooking methods such as Sri Lankan pepper, Indian curry, Japanese garlic chilli, Singaporean chilli, etc.  For decades, Sri Lankan lagoon crabs have been prized for their size and tasty meat.  Almost all of the decent sized lagoon crabs (500g – 2kg) have been exported to Singapore (90%) and other parts of Asia and Europe.  Ministry of Crab is one of the few restaurants in the nation that offers giant lagoon crabs, and has been named Asia’s 50 best restaurants for several years in a row.  In less than ten years, the restaurant has expanded to Shanghai, Manila, Mumbai, Maldives, and Bangkok.  The Ministry of Crab in Colombo is located at the Dutch Hospital Shopping Precinct, a retail complex housed in the oldest building compound in Colombo Fort, dated to 1681 in the Dutch Era.  The Ministry of Crab is a success story of Dharshan Munidasa, the celebrity owner of the restaurant.

The success of Dharshan Munidasa exemplifies how Sri Lanka may find its footing in today’s world by absorbing techniques and cultures from other countries, promoting themselves on mass media, making use of the local natural resources, and gaining global recognition by competing on the international stage.  Born in Tokyo from a Sri Lankan father and a Japanese mother, and graduated in The Johns Hopkins University in the United States, Dharshan Munidasa returned to Sri Lanka in 1994.  He came back with his Japanese cooking techniques and American way of thinking, and opened his Japanese restaurant Nihonbashi in 1995 and then Ministry of Crab in 2011, both have subsequently become the first Sri Lankan restaurants made to the list of Asia’s 50 Best Restaurants.  Munidasa appeared on BBC Rick Stein’s program in 2009, then in 2010, Munidasa produced and hosted a culinary travel show called “Culinary Journey’s with Dharshan” on Sri Lanka’s ETV.  He has also featured on Nippon Shokudo for TV Tokyo, and Anthony Bourdain’s Parts Unknown on CNN.

While the fascinating Buddhist moments in Anuradhapura and Polonnaruwa showcase the cultural heritage of Sri Lanka, and the colonial legacies in the Hill Country and South Coast reveal the nation’s difficult first encounter with the West, Munidasa’s Ministry of Crab on the other hand demonstrates how a contemporary Sri Lankan identity is taking shape and how a new culture can be confidently exported to the outside world.  From Anuradhapura to the Ministry of Crab in Colombo, we felt that we had gone through a 2000-year chronicle of Sri Lanka in a matter of 12 days. 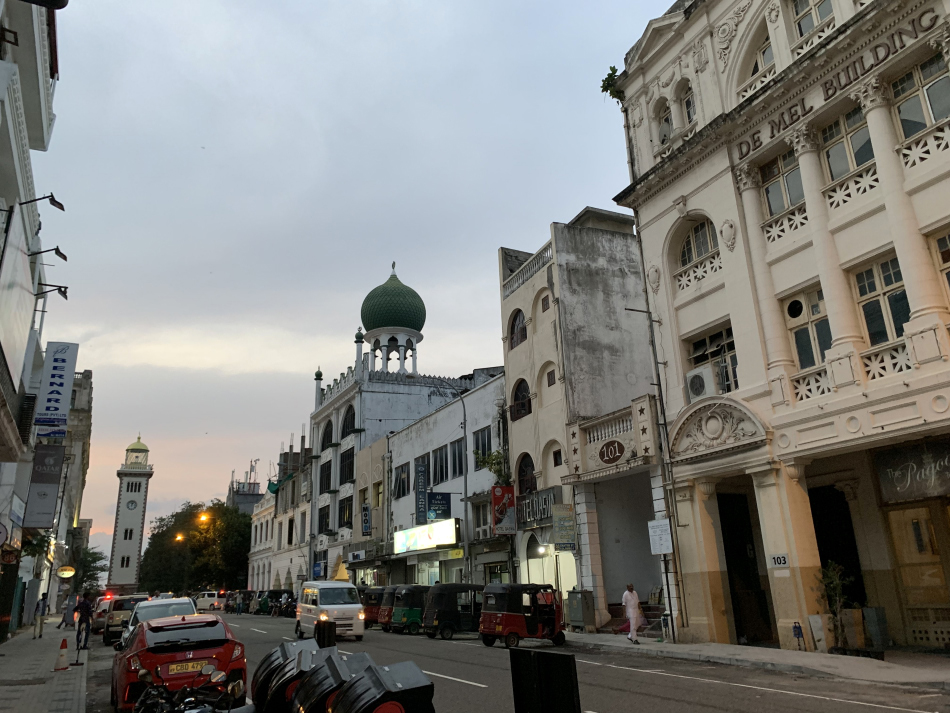 The old Colombo Lighthouse or Clock Tower was a lighthouse in Colombo and still serves as a clock tower today.  It signifies the bygone era of colonial Ceylon. 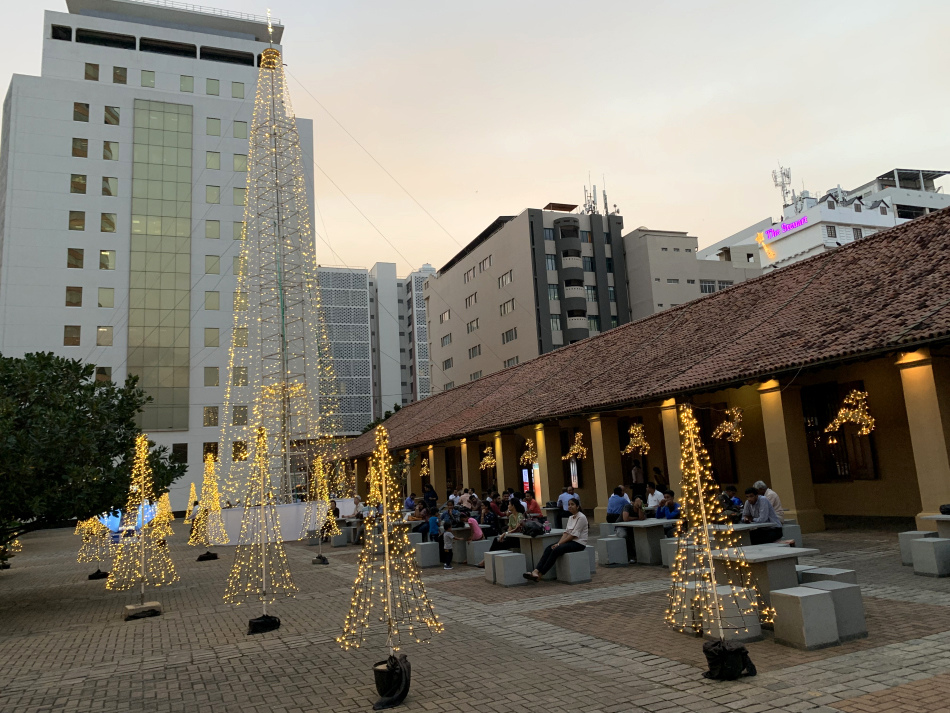 Now converted into a popular shopping and dining venue in downtown Colombo, the Old Colombo Dutch Hospital is considered to be the oldest building in Colombo Fort.

In the era of commercialism, Christmas is celebrated in Metropolitan Colombo despite the nation’s Buddhist background.

Just two blocks west of the Dutch Hospital lies an enormous construction site: 269 hectares of reclaimed land in the Indian Ocean designated for Port City, an ambitious construction project targeted to establish a new central business district with glassy towers that resemble a small Singapore.  The $1.4bn Chinese state-owned investment has been controversial: non transparent contract agreement between investors and the former Sri Lankan president Rajapaksa, environmental impact of the massive land reclamation including potential damage on the fishing industry and burden on the limited natural resources to sustain the new downtown, and the unclear operation plan in the future.

In the midst of bustling commercial activities of downtown Colombo lies the peaceful courtyards of the Dutch Hospital, where the Ministry of Crab is situated.  At the restaurant entrance, a display menu shows visitors the size range of local lagoon crabs (500g – 2kg) and prawns (150g to 500g+).

We left our luggage at the reception and sat down at our reserved table.

There were foreign visitors and expats as well as local business people in the restaurant. 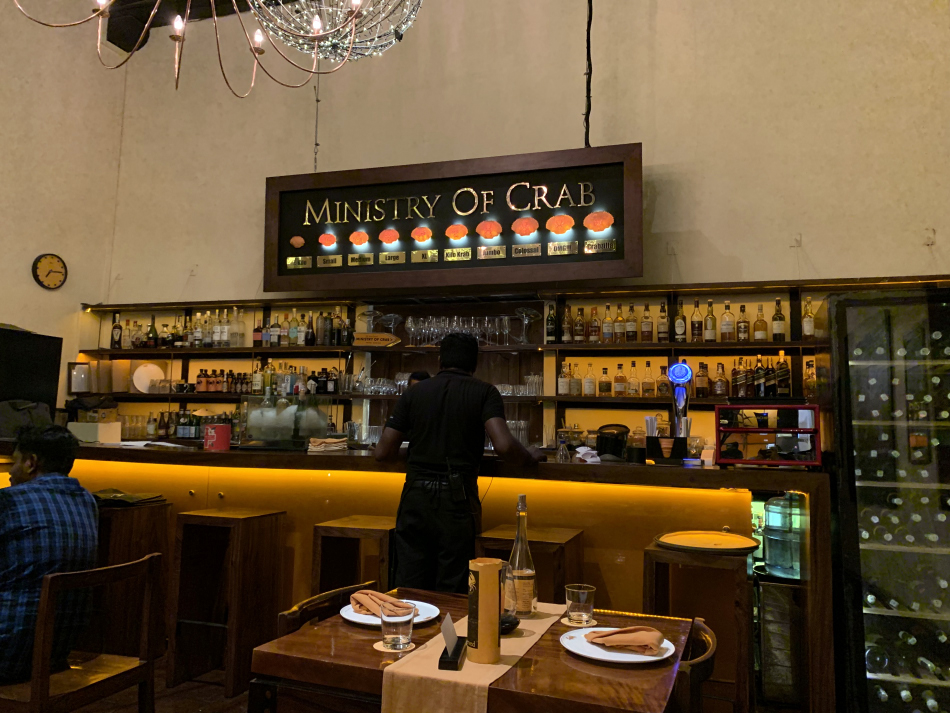 The restaurant is causal and pleasant, and decorated with the orange theme colour.

From floral arrangement to dining utensil, everything in the restaurant was cheerful.

Prawns of different sizes were on display.

We started the meal with giant prawns.

As well as king prawn bisque.

Then we finished the meal with two giant lagoon crabs, one made with Sri Lankan pepper sauce and the other garlic chilli.  They were perhaps the most tasty crabs we had for a long long time.

After dinner at 21:15, we had trouble locating our online pre-booked cab at the Dutch Hospital.  A restaurant staff helped us to talk on phone with the driver to resolve the issue.  We ended up finding the right car behind the restaurant.  At the departure concourse in the airport, we once again passed by the advertisement of Ministry of Crab, the same one that we saw 12 days ago.   What a satisfying meal and a fruitful journey!  This concludes our December 2019 journey to Sri Lanka.