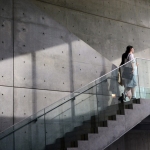 A short metro ride took us to Roppongi (六本木), a business and entertainment district dominated by the high-rise complexes of Roppongi Hills (2003) and Tokyo Midtown (2006).  Before the completion of these mixed-use developments, Roppongi was well known for its disco scene since the late 1960’s.  In 2014, we visited the area for the first time to explore these complexes and the nearby National Art Center (国立新美術館) in a stormy day.  This time, we came specifically to check out the exhibitions at Mori Art Museum and 21_21 Design Sight. 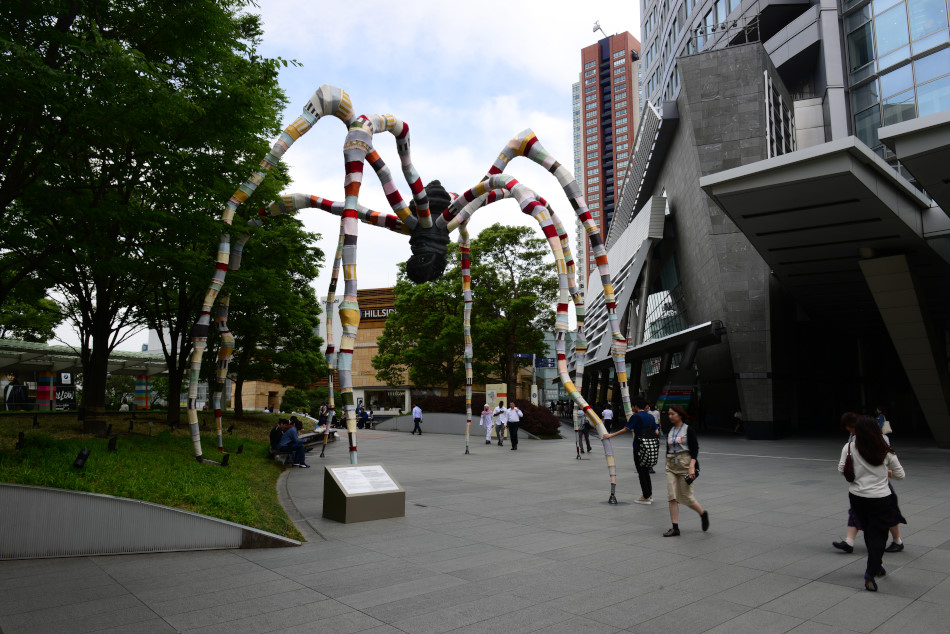 At Roku Roku Plaza of Roppongi Hills, Louise Bourgeois’ famous sculpture “Maman” was given a temporary makeover by Magda Sayeg, the textile artist who was responsible for a wide range of yarn installations in cities around the world.

On the observation deck of Mori Tower, we had a good view of the surrounding area.  The wavy facade of Kisho Kurokawa’s National Art Center stood out at the forefront.

To mark its 15th anniversary, the Mori Art Museum was hosting an exhibition on Japanese architecture on the 53rd floor of Mori Tower. 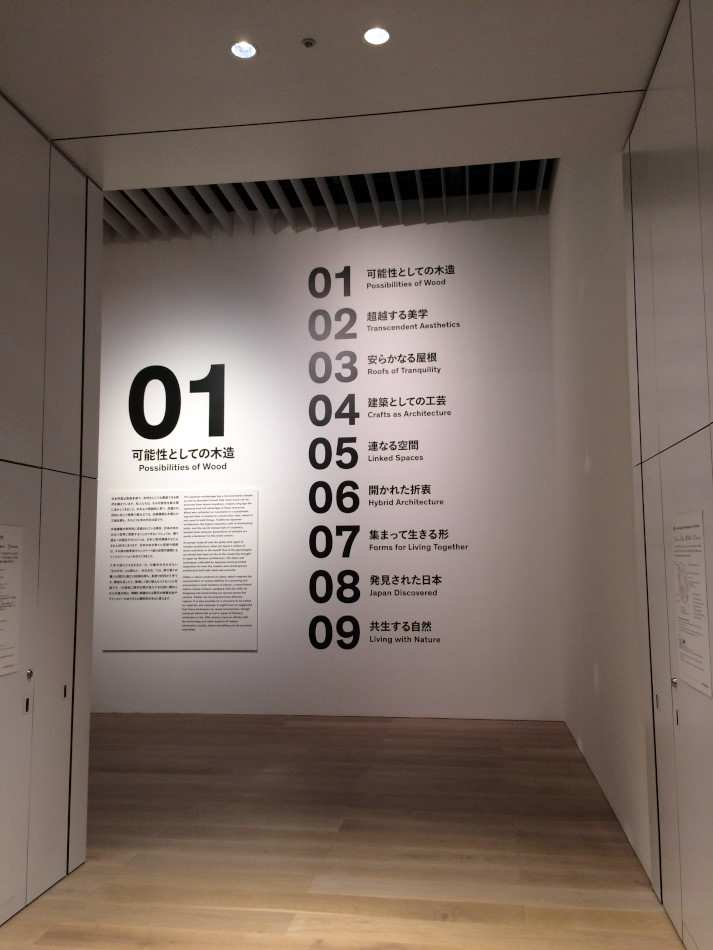 “Japan in Architecture: Genealogies of Its Transformation” presented the essence of modern Japanese architecture in 9 sections: 1) Possibilities of Wood, 2) Transcendent Aesthetics, 3) Roofs of Tranquility, 4) Crafts as Architecture, 5) Linked Spaces, 6) Hybrid Architecture, 7) Forms of Living Together, 8) Japan Discovered, and 9) Living with Nature.

In each section, the topics were presented with physical models, design installations, architectural drawings, project photos, hand sketches, etc.  Photography was not allowed for most displays. 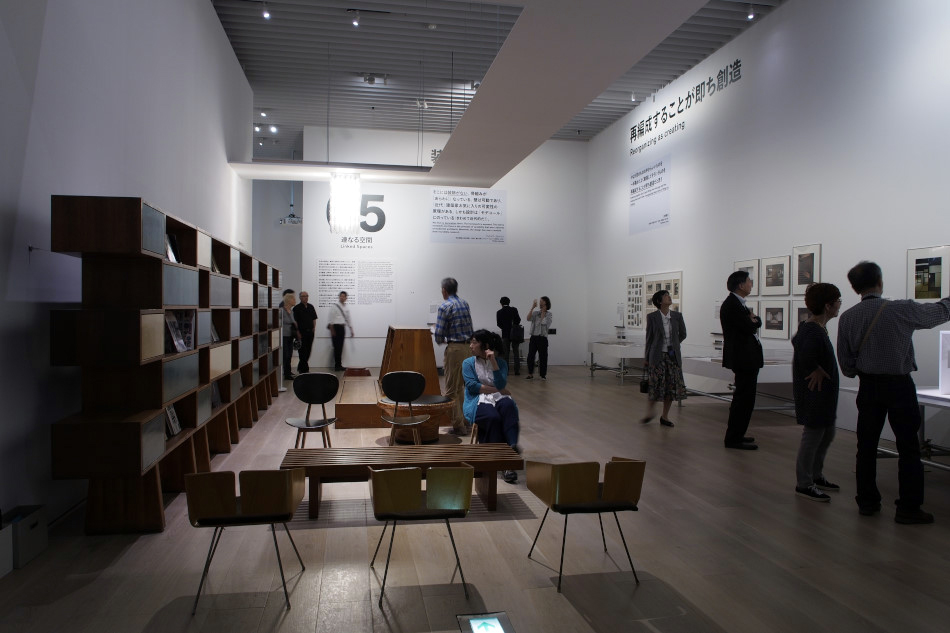 A one-to-one model of a Japanese tea house offered visitors a chance to see the essence of traditional minimalist architecture.

This large wooden model of what looked like a traditional Japanese home was in fact the Tange House designed by architectural maestro Kenzo Tange (丹下健三).  Built in 1953, the Tange House presented a fusion of traditional style and customs of modern living.

Towards the end of the exhibition, there was an eye-catching multi-media show made with 3D projections. 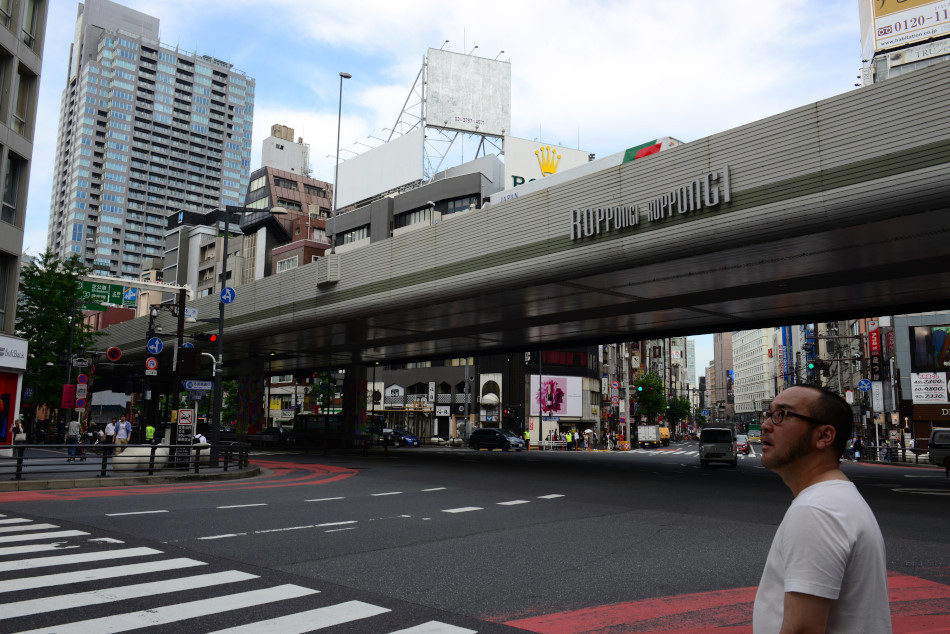 After a good taste of Japanese architecture at Mori, we walked a few blocks north to 21_21 Design Sight, a small design museum at Hinokicho Park (檜町公園) in Tokyo Midtown.

With the beautiful terracotta cladding, the 20-acre Tokyo Midtown is an elegant and highly recognizable high-rise complex. 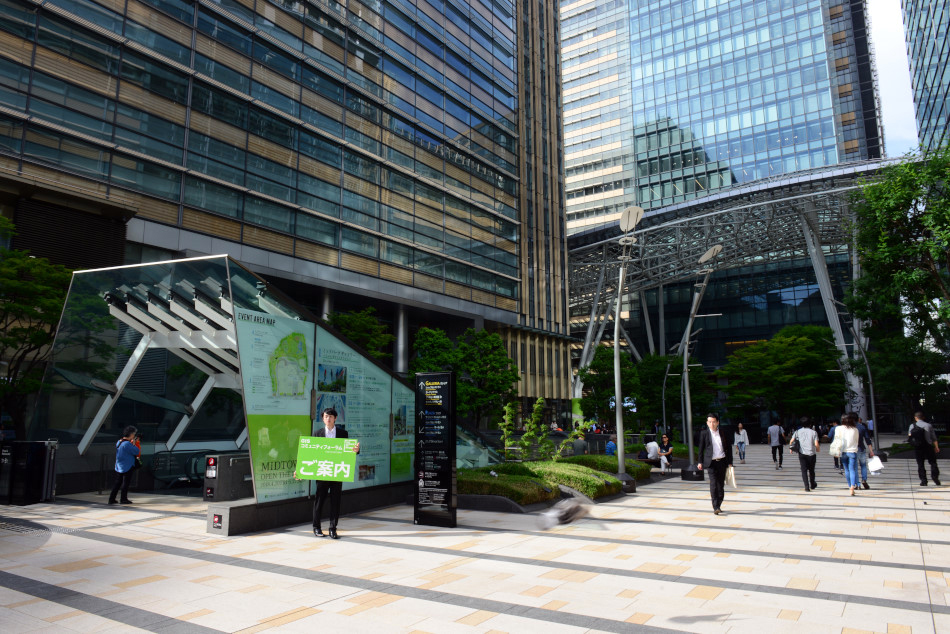 With glass canopies and shade trees, the outdoor areas of Tokyo Midtown exemplify a role model of livable city. 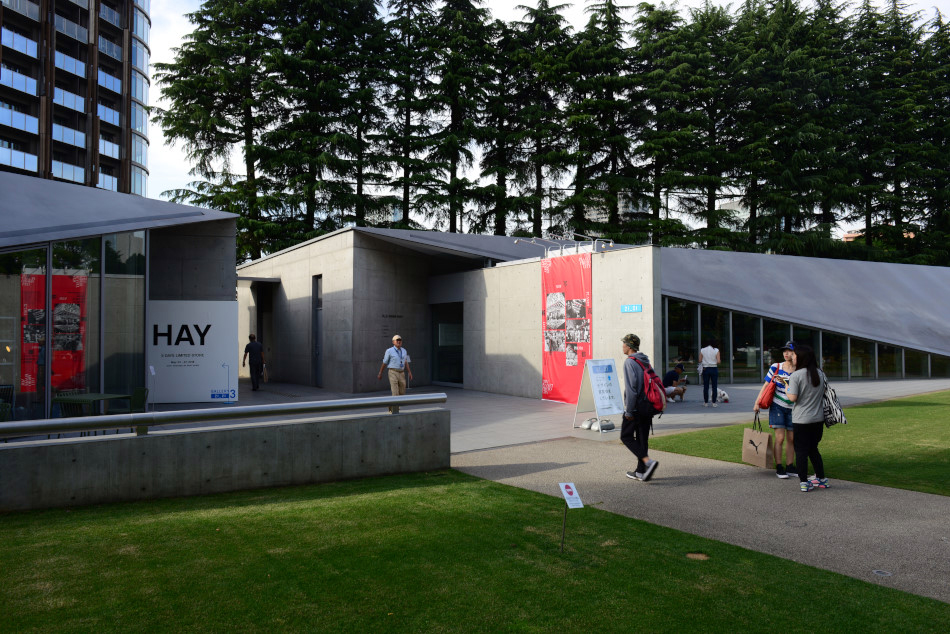 Last time when we came to 21_21 Design Sight, the facility was closed for exhibition installation.  This time, a photography show “New Planet Photo City – William Klein and Photographers Living in the 22nd Century” was held, and we were able to see the show as well as the building designed by Tadao Ando.

Despite its small scale, Ando’s 21_21 Design Sight was an interesting attraction for design enthusiasts.

Curated by photographic critic and art historian Toshiharu Ito, the show began with a video presentation of William Klein’s photographs on the 20th century urbanity, and then contemporary photography on city and people by various Asian photographers. 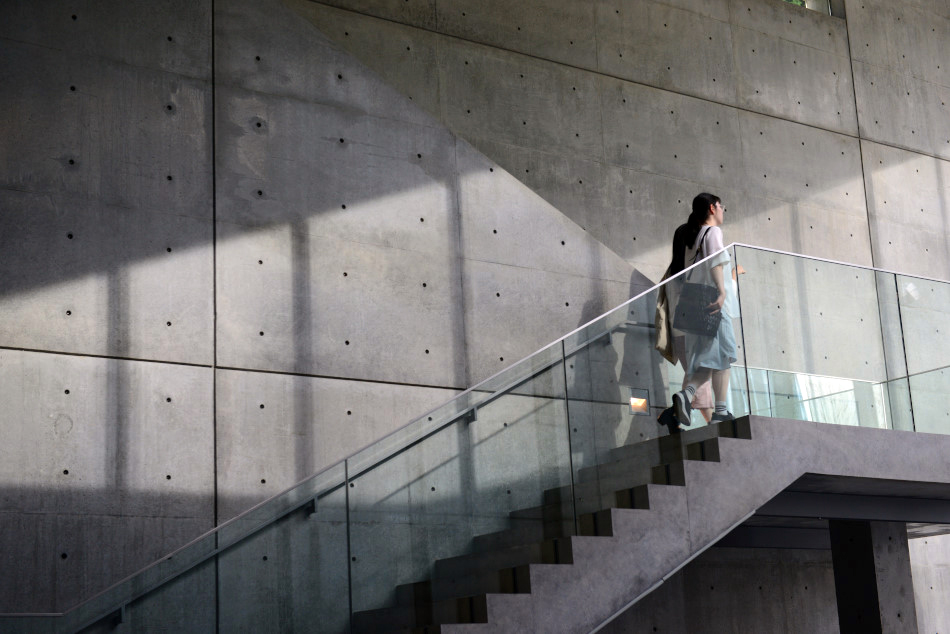 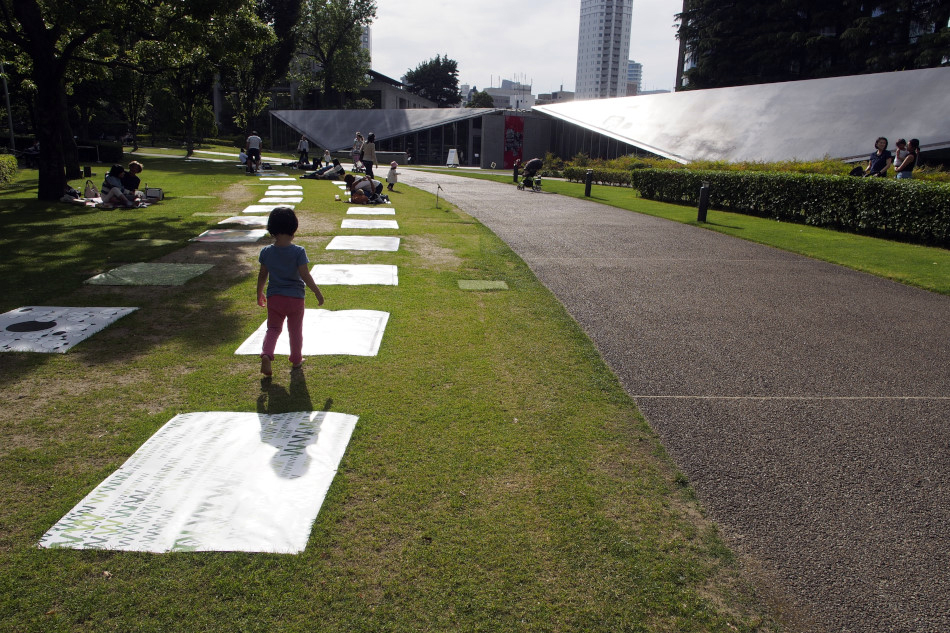 Outside 21_21 Design Sight, the afternoon sun was soft and relaxing.

We sat on a bench in Hinokicho Park (檜町公園) to take a brief rest, and decided to follow Google Map for a 25-minute walk to Aoyama (青山).  Time was getting a little late and we weren’t sure if we could still make it to see Taro Okamoto Memorial Museum (岡本太郎記念館), the former home of renounced artist Taro Okamoto.  We left Tokyo Midtown and walked west from Nogizaka Station (乃木坂駅), passed by the peaceful Aoyama Cemetery (青山霊園), and reached the fabulous Nezu Museum (根津美術館) in Aoyama at around 4:15pm.  From Nezu, it was only a block from Taro Okamoto’s former residence, and we had about 1.5 hour to visit the house, its exhibitions and cafe.  Time was a little tight and we were quite tired due to the midnight flight.  We decided to leave the museum until next time in town.

Instead, we opted for Cafe Kitsuné at a side street off the fashionable Omotesando (表参道), where the creative talents of world famous fashion designers and architects converged into high-end fashion boutiques.  Associated with Kitsuné, a French electronic music record and fashion label (Kitsuné Maison) created by Gildas Loaec, Masaya Kuroki and company Abake, Cafe Kitsuné is a little gem in Aoyama for anyone who loves coffee and design. 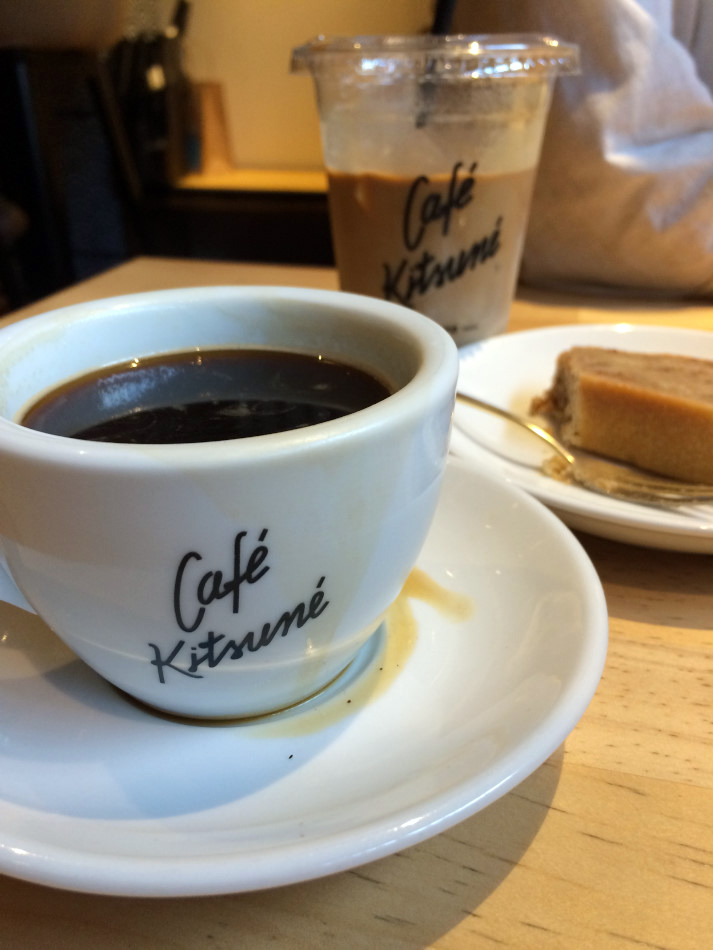 The nice coffee from Japan’s first Slayer coffee machine and the stylish interior made the visit worthwhile.