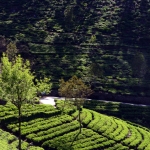 In 1890, Scottish merchant Thomas Lipton who owned a vast business of grocery stores in Britain, visited British Ceylon and partnered with tea farming pioneer James Taylor to secure supply of Ceylon tea and distributed it throughout Europe and the United States.  Lipton’s business plan of providing affordable tea to the mass working class in the West led to the increasing demand of tea and the bloom of tea plantations in Sri Lanka.  The plan eventually developed into the business empire of Lipton tea.

Near the hill town of Haputale, about an hour of train ride west of Ella, the enormous Dambatenne Tea Factory and the surrounding tea fields have been immortalized by the legacy of their founder, Thomas Lipton.  An 8km uphill hike to the lookout known as Lipton’s Seat remains as one of the best hike through the tea plantations in the hill country.  Unlike taking the train or car, hiking in the tea plantations allow visitors to get close to the tea bushes and interact with the tea pickers. 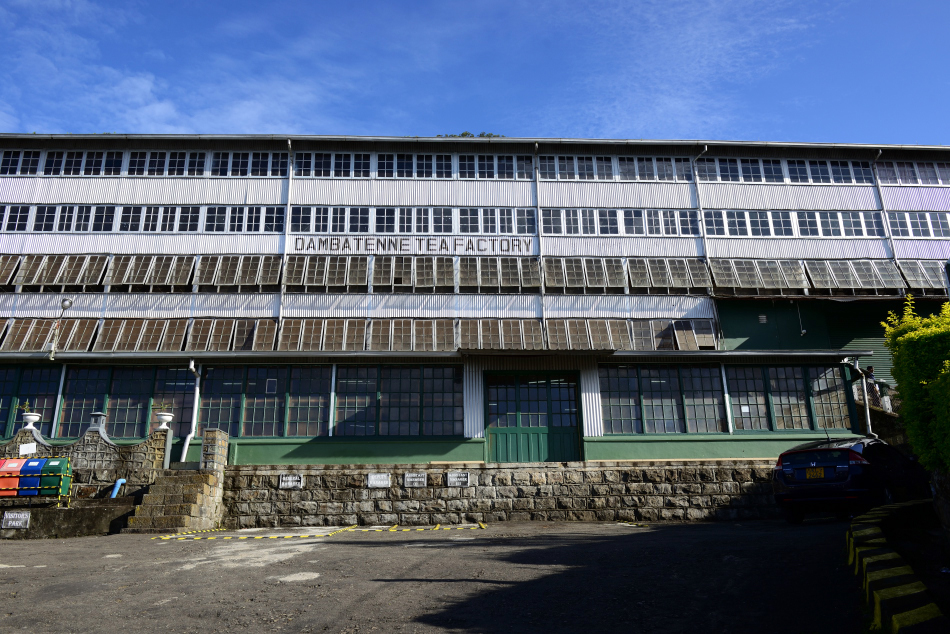 From Haputale railway station, we hopped on a tuk tuk and got dropped off at the entrance of Dambatenne Tea Factory.  We had no hurry to tour the factory, and left the factory tour for after the hike. 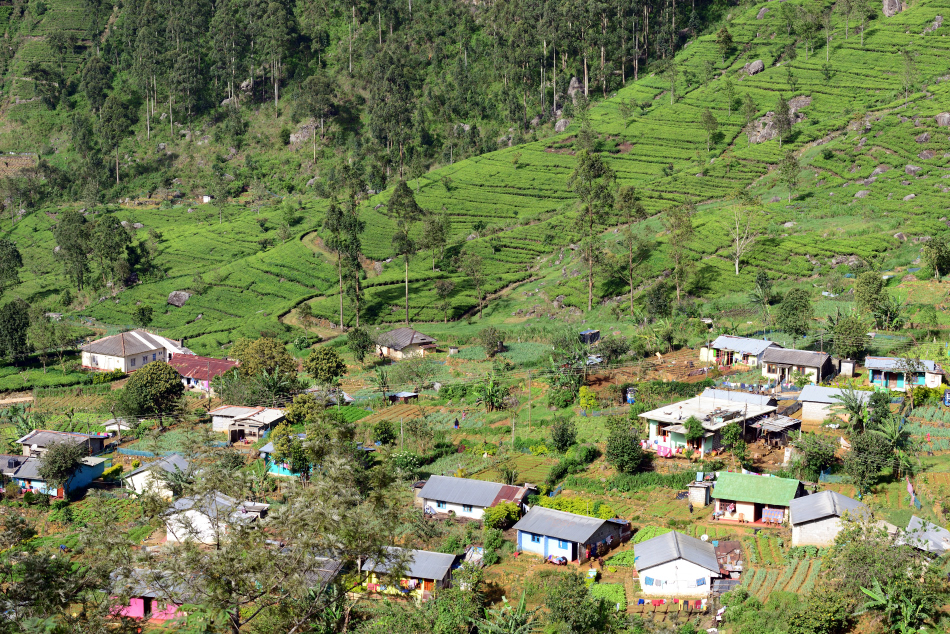 From the factory, we began to walk uphill into the plantation area along a winding road frequented by tea pickers.  Tea terraces extend out in all directions from the road.  We passed by all sort of buildings from worker dormitories to school complex, all apparently belong to the community of plantation workers. 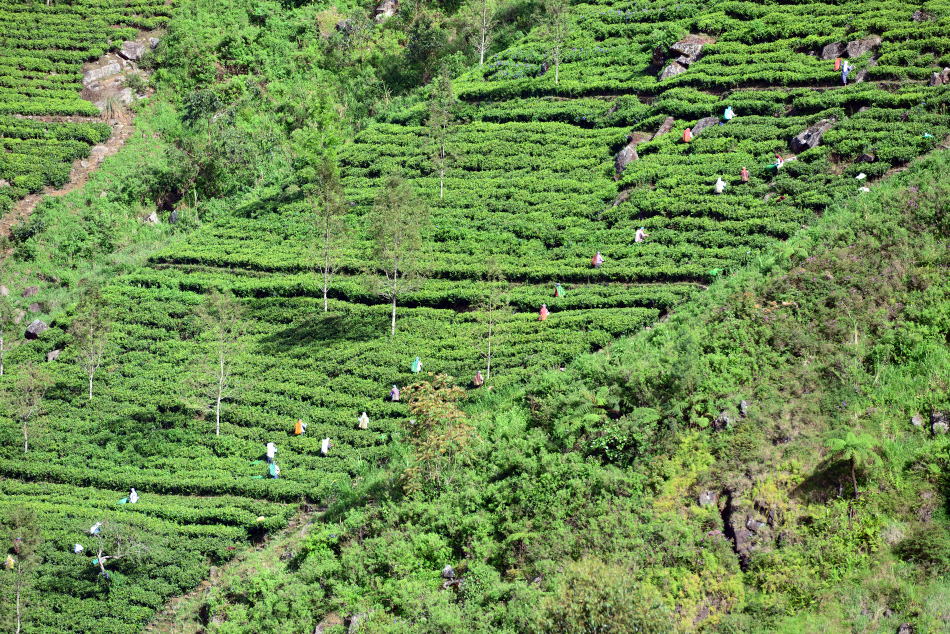 Rows after rows of tea plants terraced up the hill slopes.  Busy tea pickers dotted on the slope moving slowly horizontally on the slope. 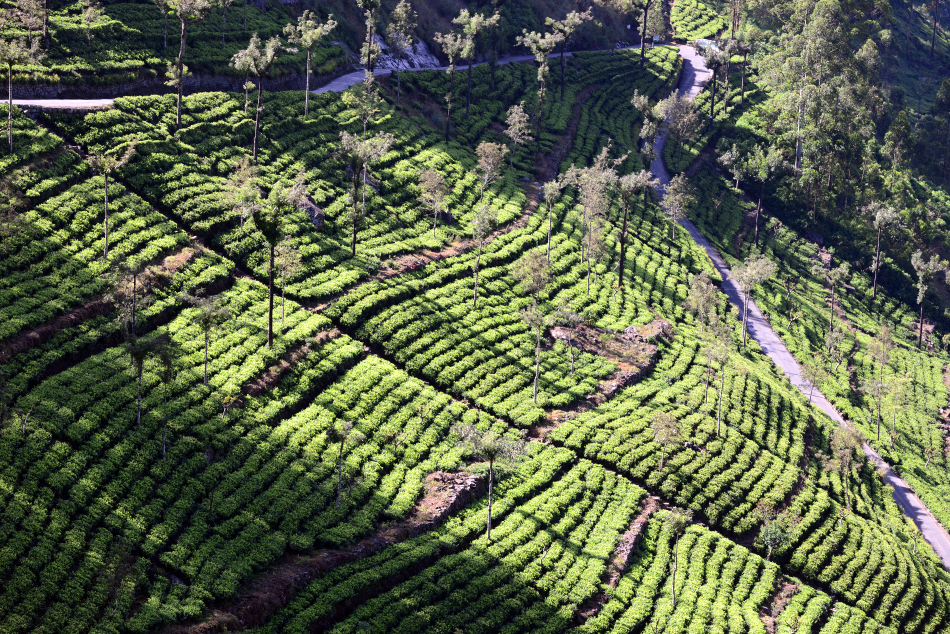 Dramatic  shadows were cast on the tea slope in the early part of our hike. 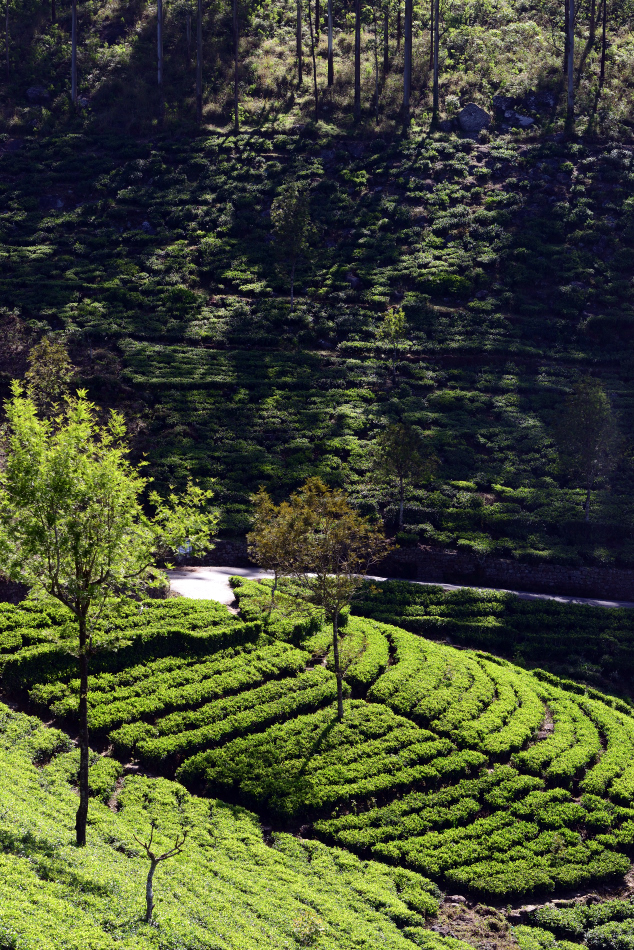 Everywhere was lush green as we walked deeper into the plantation. 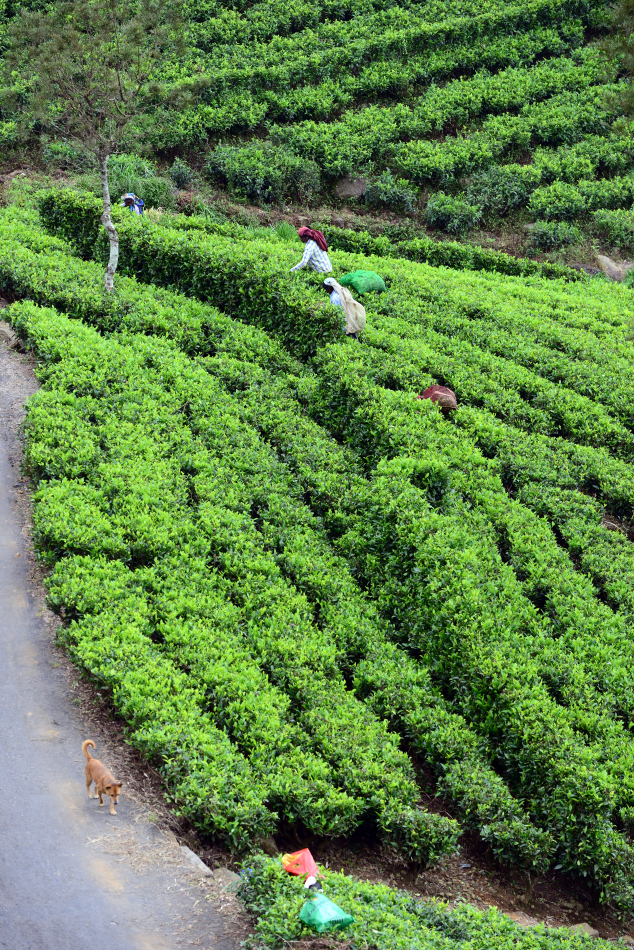 Causally zooming into any cluster of tea pickers would create a scenic picture. 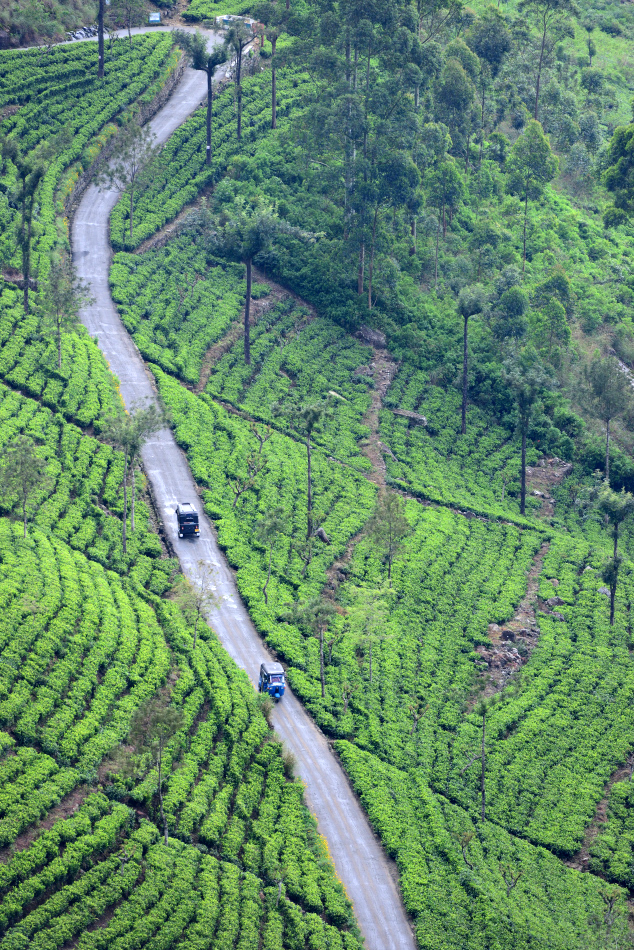 For visitors who don’t want to hike uphill may opt for a tuk tuk ride up to the destination.  But surely walking would offer much more opportunities to get close to the tea shrubs and tea workers. 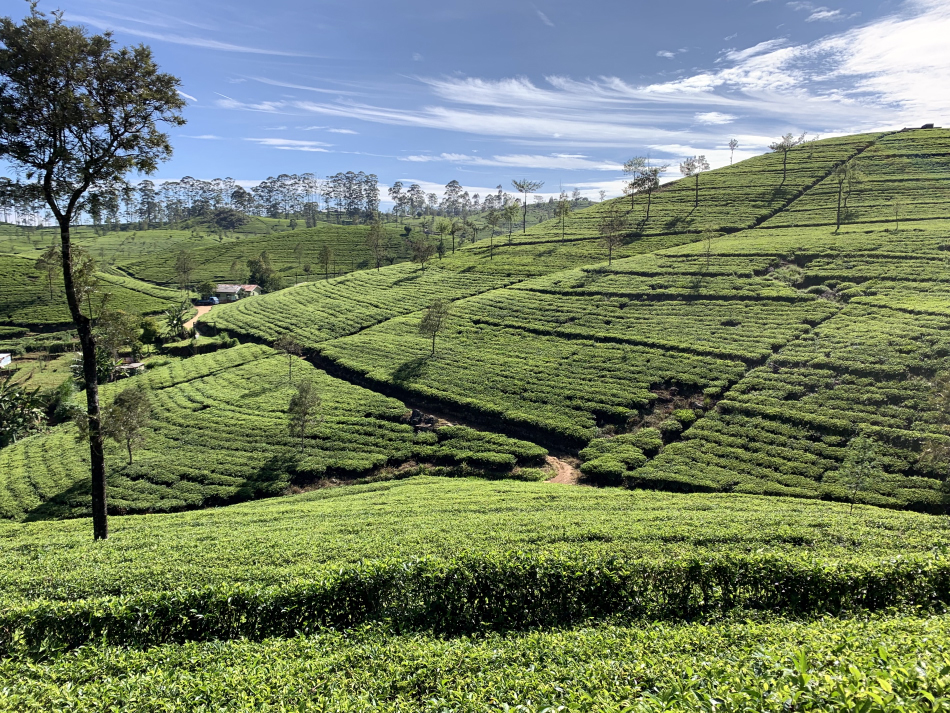 Past the first valley, we soon realized that the tea plantation was much larger than we thought.  Tea terraces extended out from all directions to as far as our eyes could reach. 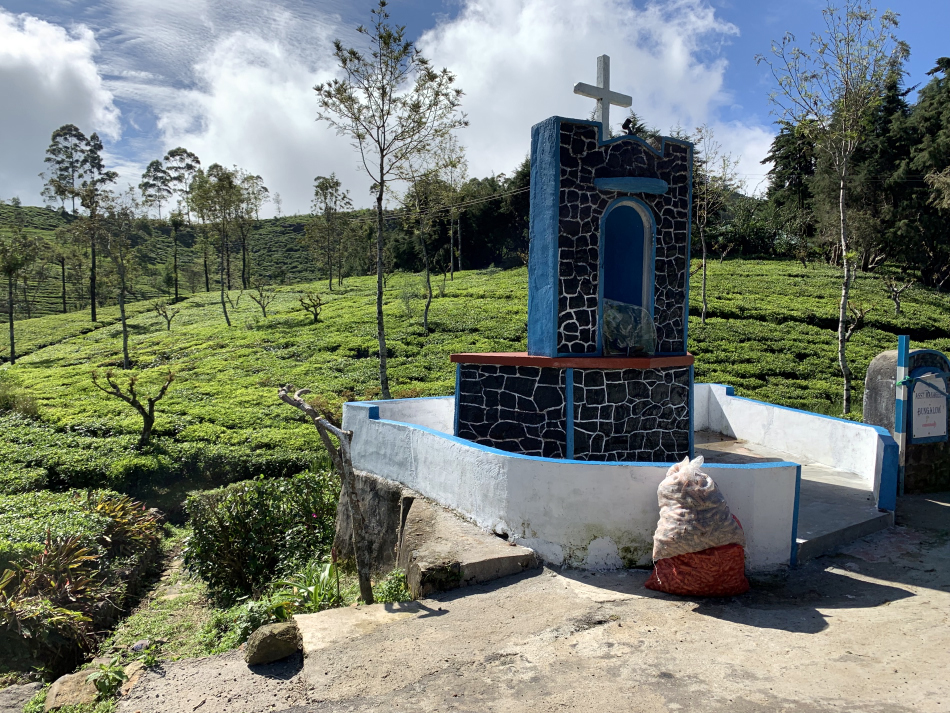 Shrines of different religions, including Roman Catholic Christianity, signify the wide range of religious backgrounds of the tea workers. 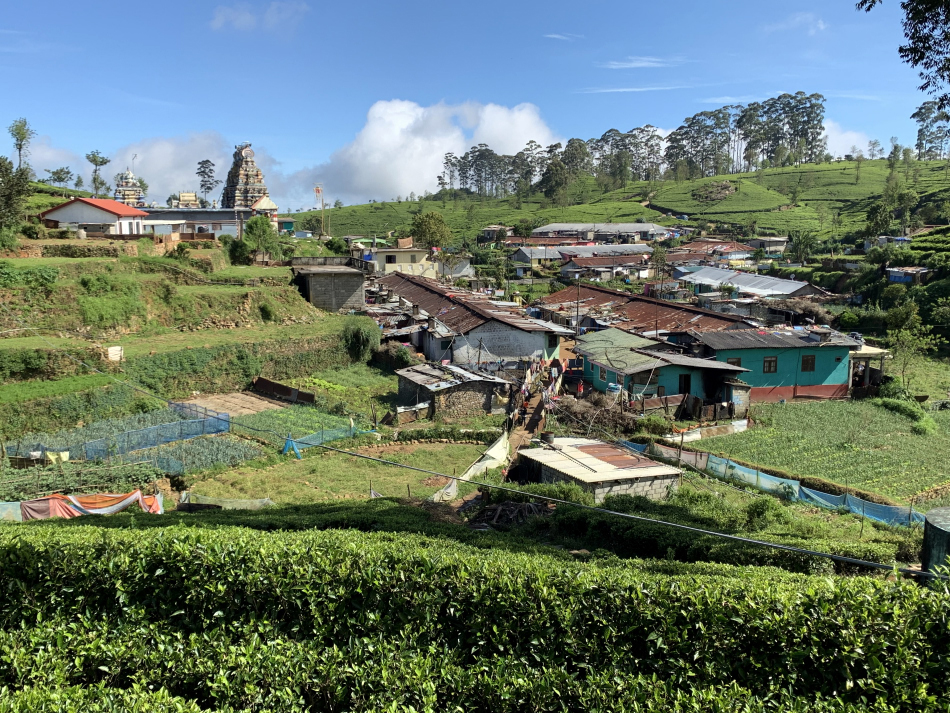 A tea plantation is much more than just a place for work.  It also includes settlement of housing, school, dining places, temples, etc.  Many tea workers are Tamils from Southern India, thus settlements with a Hindu shrine are quite common. 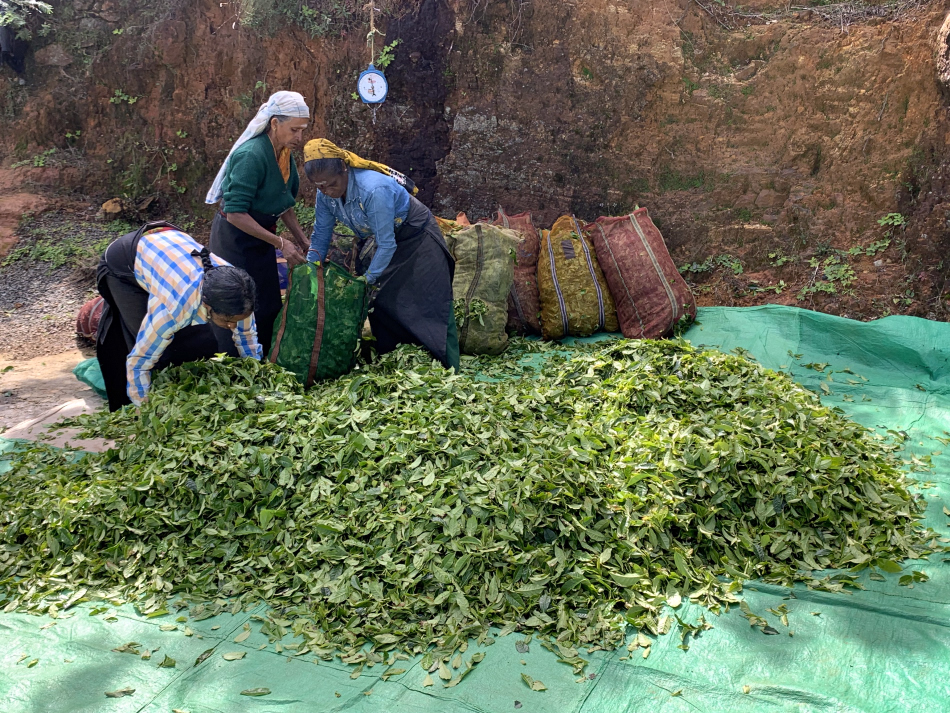 Near Lipton’s Seat lookout, we stumbled upon a weighing station where tea pickers offloaded their tea leaves, got them weighed and repacked into large bags for transportation. 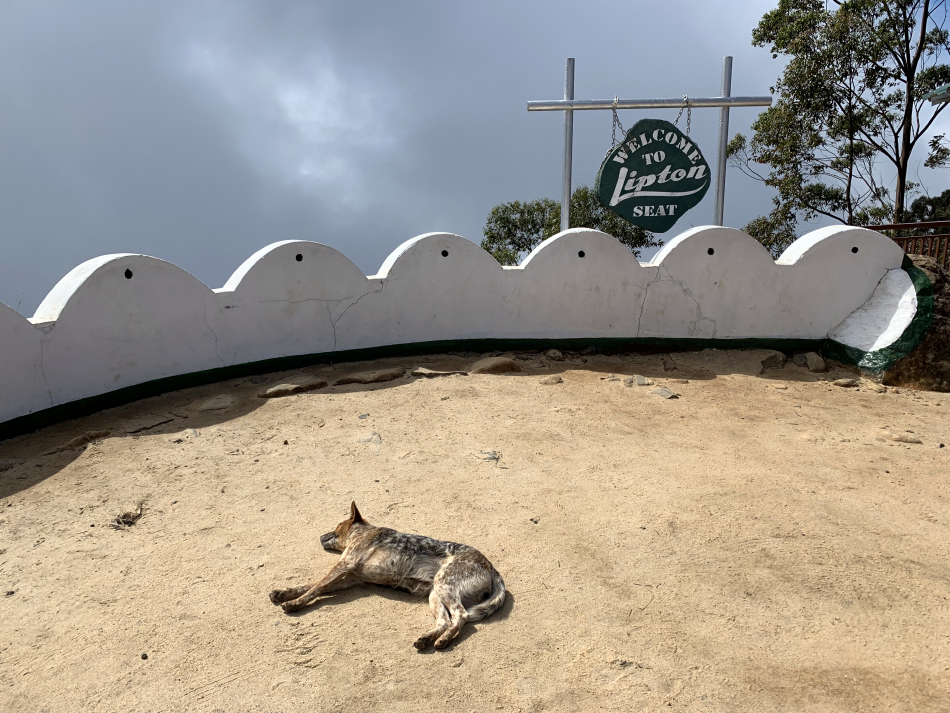 Soon we arrived at the lookout of Lipton’s Seat, apart from a sleepy dog and a bronze statue of Sir Thomas Lipton, only fog coming from the other side of the mountain greeted our arrival.  Some said this was the spot where Lipton loved to linger when he came to inspect the plantation.  With the fog, we had no luck to see the supposedly good view from the lookout. 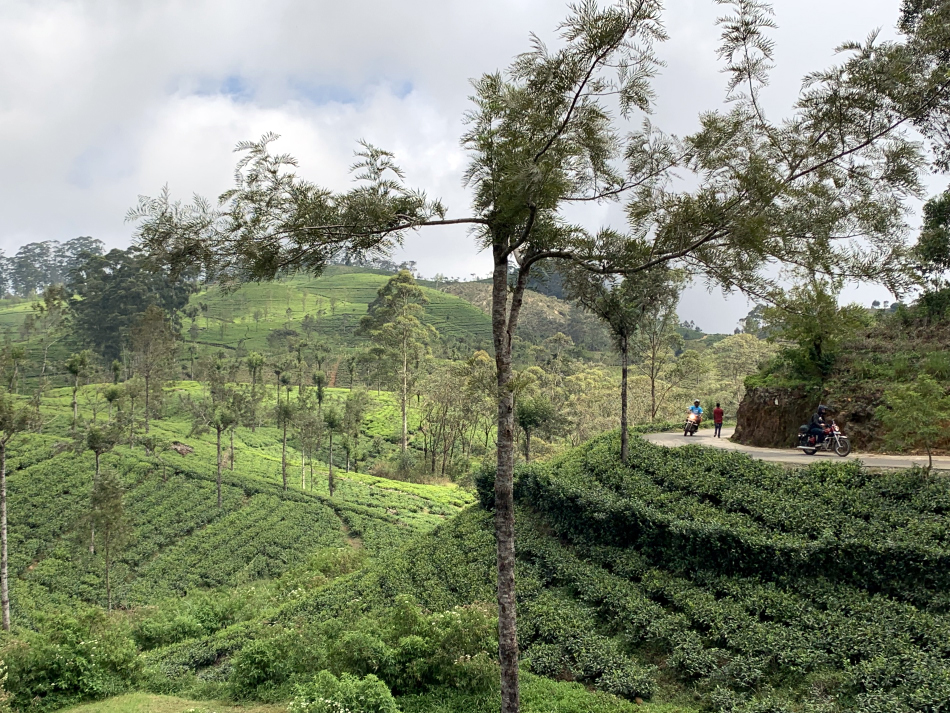 Soon we realized that great scenery of this hike were basically everywhere, not limited to the final lookout. 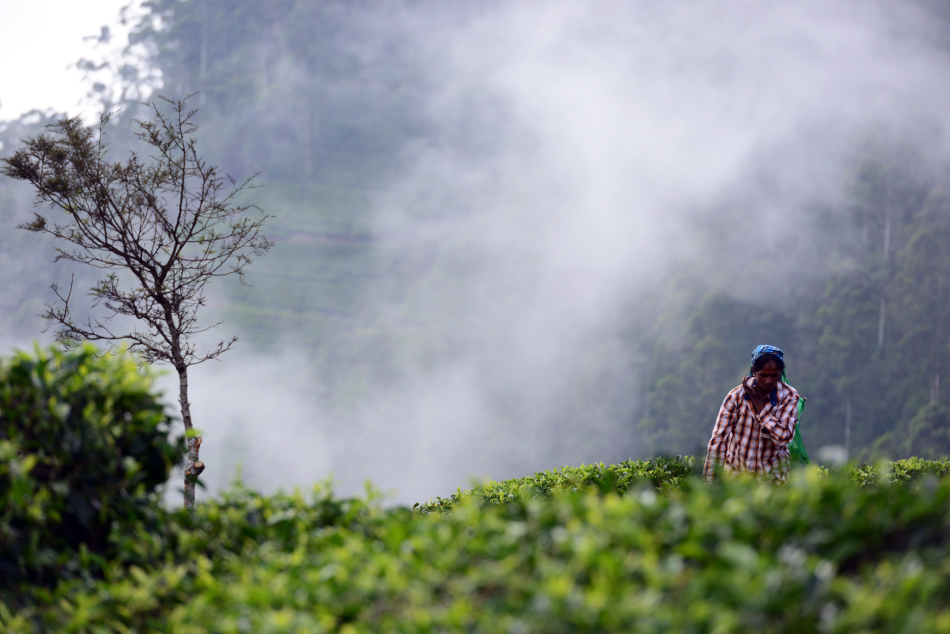 Doing the journey on foot allowed us to get close with the tea pickers. 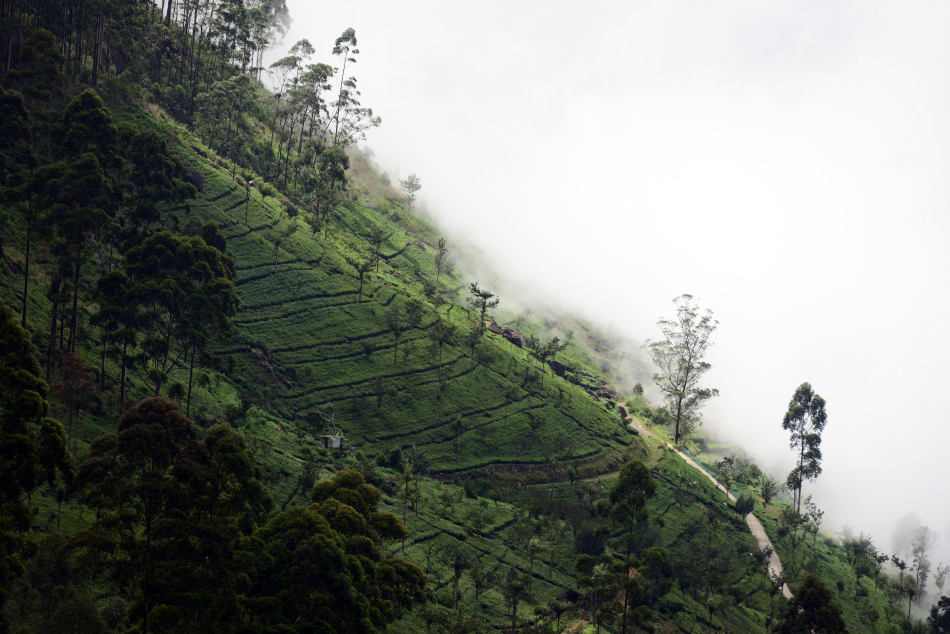 Returning to the first valley where we started the hike, the slope with dramatic shadows was replaced by a foggy scene. 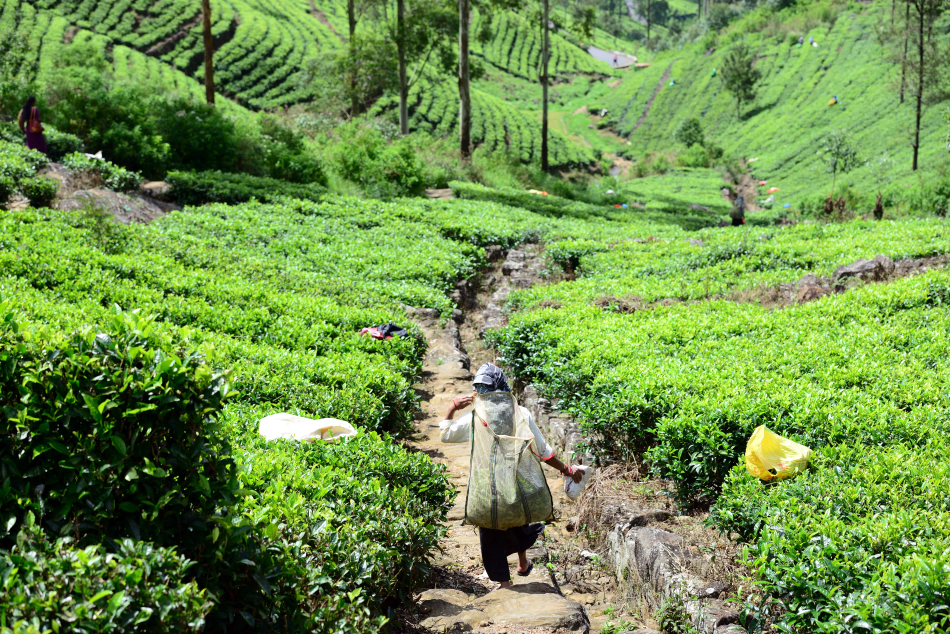 Following a tea picker, we chose a different route to descend the slope towards the factory. 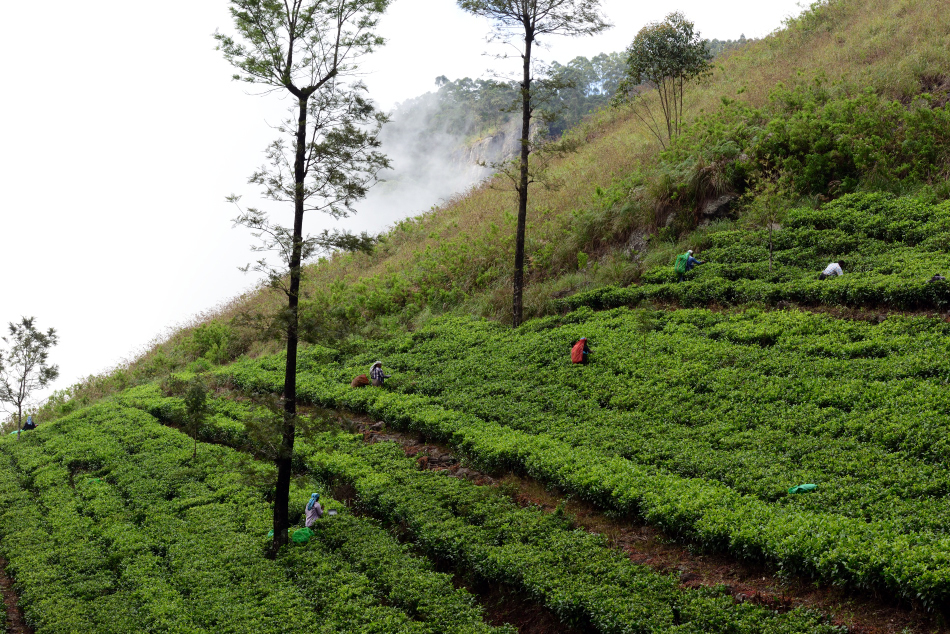 The small path through the tea rows gave us a closer view of the working scenes of tea pickers. 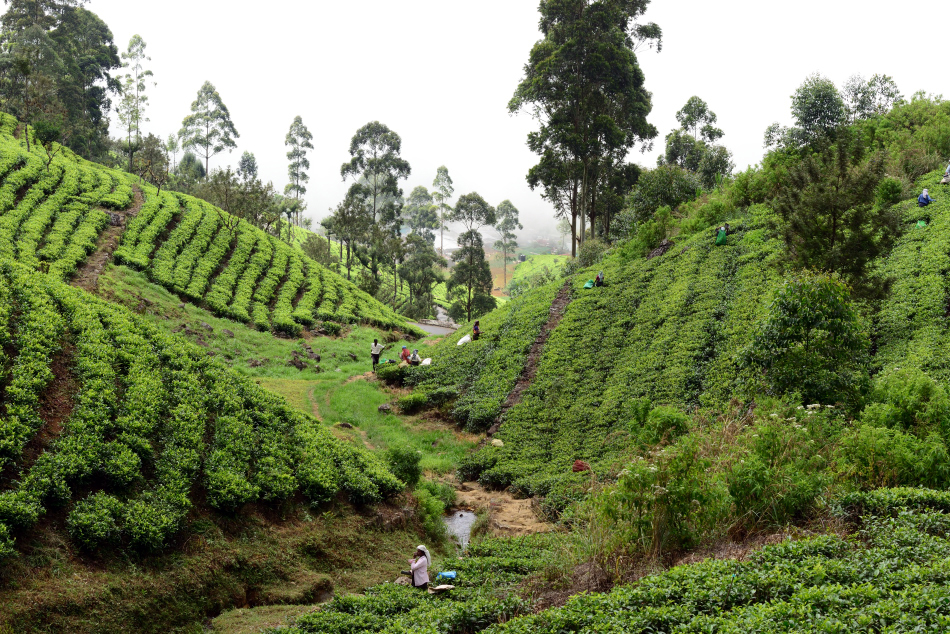 We took our time to walk down and were greeted by several smiling tea pickers. 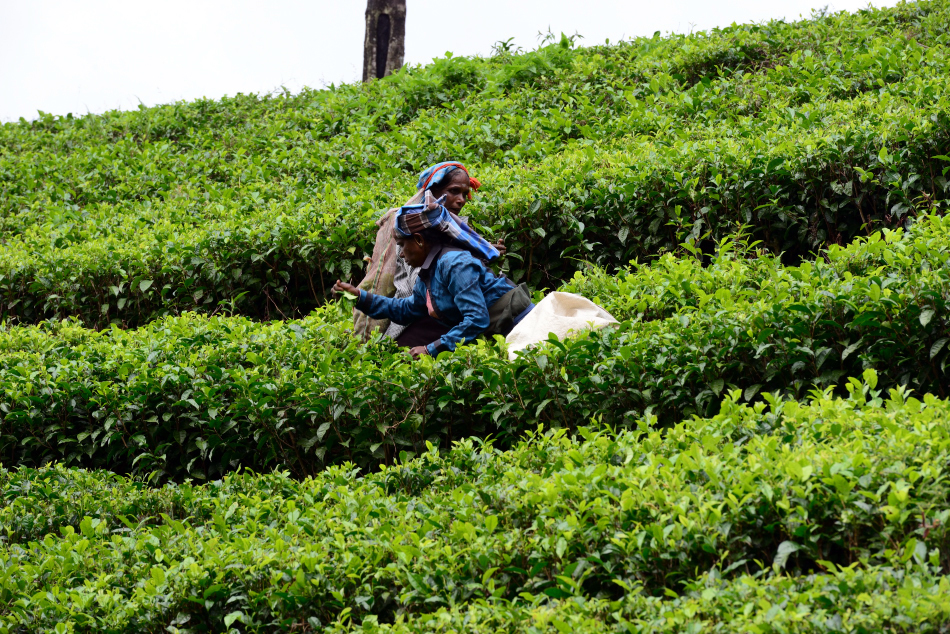 Close up of working tea pickers. 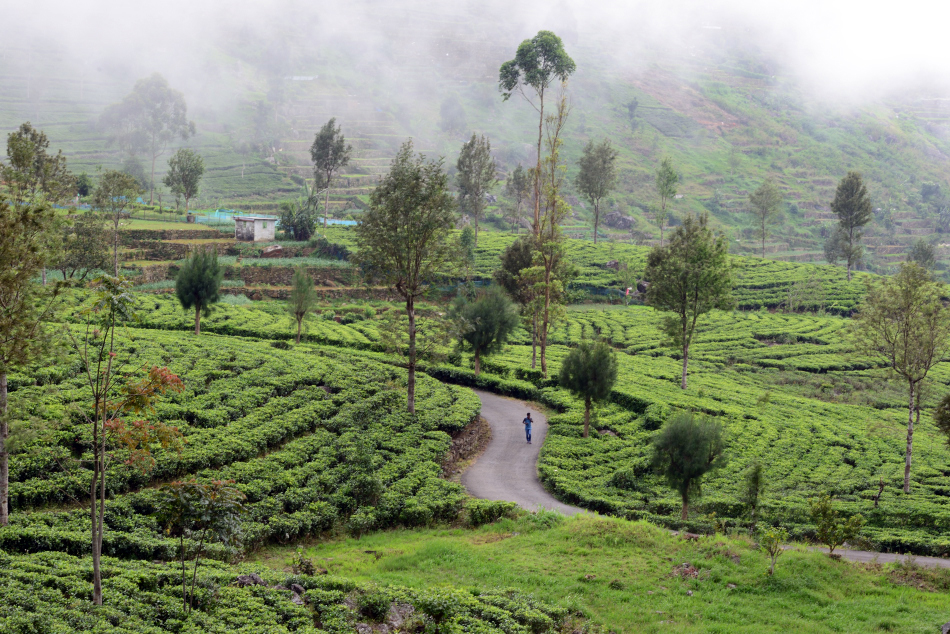 We leisurely walked back to Dambatenne Tea Factory in the fog.  At the factory, we joined a tour to learn more about the tea making process, machinery and traditions.