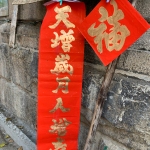 It was a fine Saturday morning about two weeks before Chinese New Year 2021, the second Chinese New Year since we moved to the Ladder Street neighborhood. We walked down Ladder Street just like any weekday when we go to work. It wasn’t our working day but we walked down specifically looking for an elderly vendor called Yim Keng-tim (嚴鏡添), who had been writing fai chun (揮春) or decorative banners with Chinese lucky phases for decades. Fai chun is usually written in Chinese brush calligraphy, with either black or golden ink on red rice paper. In Sheung Wan, the intersection of Ladder Street and Lascar Row (摩羅上街), commonly known as Cat Street, is a popular spot for fai chun calligraphers to set up their booths around the time of Chinese New Year. Calligrapher Yim Keng-tim, nicknamed Uncle Tim (添叔), was a renowned figure in the Cat Street neighborhood, the largest antique street market in Hong Kong. Probably the earliest fai chun writer who set up his booth since around 1960, for over sixty years Uncle Yim had made a name for himself with his Chinese calligraphy, which other than fai chun, were also available for signage and banners for restaurants, shops and even offices of politicians. Apart from calligraphy, Uncle Tim also sold and repaired eyeglasses from his street stall at Circular Pathway (弓絃巷), a small street off Ladder Street that was once teemed with neighborhood lives decades ago. Since the street was dramatically cut short in the 1990’s by modern residential development, shops and stall vendors gradually disappeared. By the time we moved into the neighborhood, only a restaurant and two street stalls remained. Uncle Tim’s Tim Kee Eyeglasses (添記眼鏡) was one of them.

As we walked down the rather filthy steps covered with pigeon droppings to Circular Pathway from Ladder Street, we were hoping to find Uncle Tim at his eyeglasses stall and buy a few fai chun from him. It wasn’t our first time to check out his stall, but just like earlier, his stall was closed and the Circular Pathway dead quiet. Disappointed, we walked over to Cat Street. Most of the antique shops had yet opened their doors. We sat down outside Halfway Coffee, one of our favorite neighborhood coffee shops, for a morning coffee. The sun gradually moved up the sky, while shop vendors arrived at their antique shops one by one. We finished our coffee and decided to checked out Tim Kee Eyeglasses once again. At the junction of Cat and Ladder Street, we chatted with a friendly souvenir stall owner about Uncle Tim, who at the age of 96, would only come to his stall occasionally. Five minutes later, we finally saw Uncle Tim emerged from behind his stall. With his bent spine and grey hair, Uncle Tim looked a little older than the online videos and photographs in newspaper, magazines and blogs that we saw in the past few years. After greetings, we told him that we wanted to buy some fai chun from him. He was delighted to receive us as his first customers of the day, and asked us to write down the phases that we wanted him to write. We helped him to set up his folding table, while he went to his stall to search for red rice paper, paper knife, calligraphy brush, and gold enamel paint. He slowly cut the paper into square and rectangular pieces, stirred the paint thoroughly, and jumped right into calligraphy writing. While his calligraphy might not be as fine as his earlier works, we were touched and grateful to witness Uncle Tim at work doing his favorite Chinese calligraphy. Being persistently to maintain his eyeglasses stall, selling fai chun and promoting the art of Chinese calligraphy continuously for over sixty years was a remarkable effort. At the age of 96, climbing the steps of Ladder Street and Circular Pathway and set up his table all by himself were no easy tasks, and would probably scare off most people. We bought six fai chun from Uncle Tim in total, thanked him and happily took the pieces home.

After that day, we saw him a few more times in the following week or so, either quietly sitting in front of his stall, or up at Ladder Street waiting for potential customers. After Chinese New Year, we never saw him again. Whenever we passed by Circular Pathway going to work, we would always peek down to check out his stall from a distance, and wonder how the old calligrapher was doing. Until one day in early July, while walking down Ladder Street going to work we saw a bunch of paper and boxes piled up against his stall. Then the next day we walked down Circular Pathway to take a closer look. Beyond the pile of paper and boxes we saw a notice on his stall saying the recent death of Uncle Tim at the age of 97. After 60 years selling eyeglasses and calligraphy in the Cat Street neighborhood, Uncle Tim finally called it a day and rest peacefully ever after. 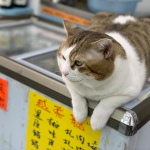