Similar to the Taj Mahal and Fatehpur Sikri, the Agra Fort has been inscribed in the UNESCO World Heritage List since the 1980s, making it one of the three must-see attractions in Agra.  Known as the Red Fort of Agra, the Agra Fort served as the royal residence of the early Mughal emperors until 1638 when the capital was moved to Delhi.  It was constructed during the golden age of the Mughal Empire under two prolific builders: Emperor Akbar the Great and his grandson Shah Jahan.  While Akbar is well known for founding the short lived capital Fatehpur Sikri, Shah Jahan is perhaps best known for erecting the most perfect Mughal architecture ever, the Taj Mahal.  On the ruins of an earlier fort, Akbar rebuilt the Agra Fort with red sandstone.  Akbar’s Agra Fort was completed in 1573 but was later transformed by Shah Jahan into its current mix of red sandstone and white marble buildings.

After visiting the Taj, we dropped by Joney’s Place, the local eatery where we had dinner the night before for breakfast.  We had a few hours to spare before our walking tour at 2:30pm.  Agra Fort was the obvious choice for us.  An auto rickshaw brought us to the busy fort entrance in no time.  Just like the Red Fort in Delhi, Agra Fort was very popular with local tourists.

Despite served as the royal residence, the Agra Fort appeared like a heavily fortified complex from its exterior.

Inside Agra Fort, Diwan-i-am was the main audience hall in the complex. 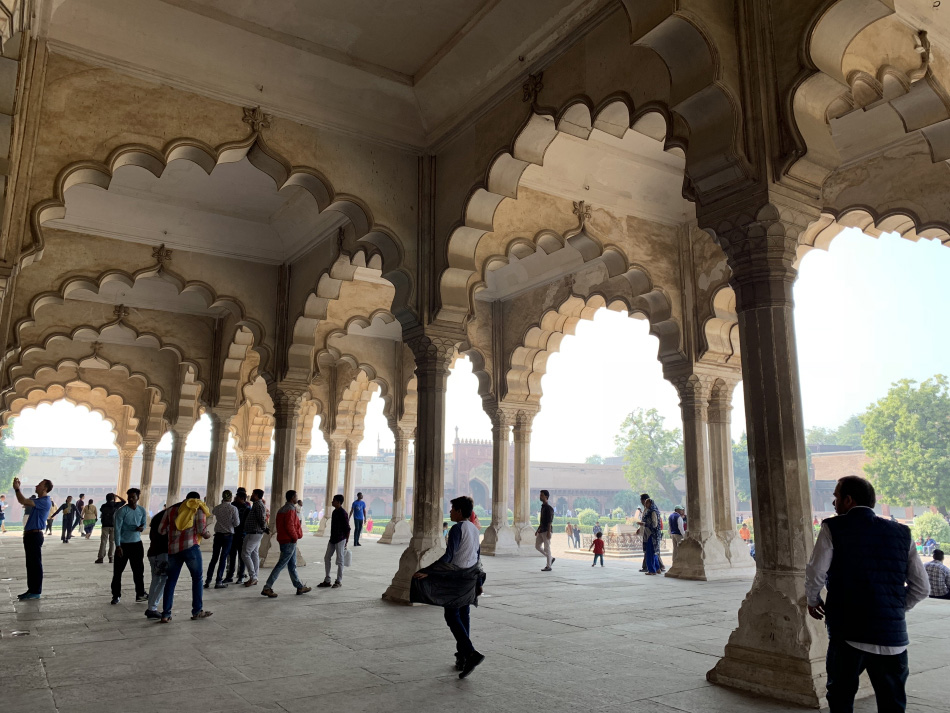 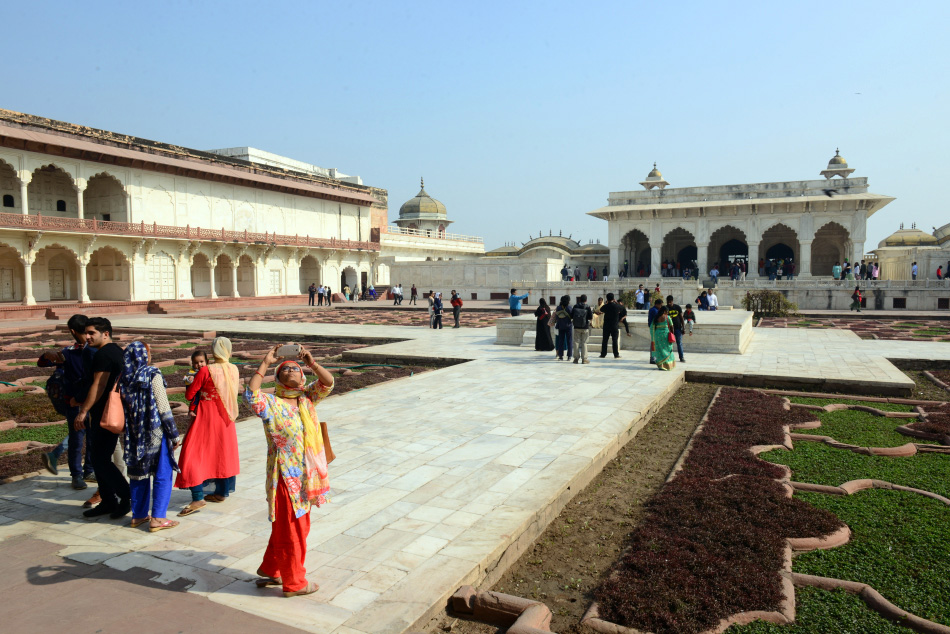 Constructed by Shah Jahan in 1637, the Anguri Bagh (Grape Garden) was used as a vineyard to make wine for the emperor. 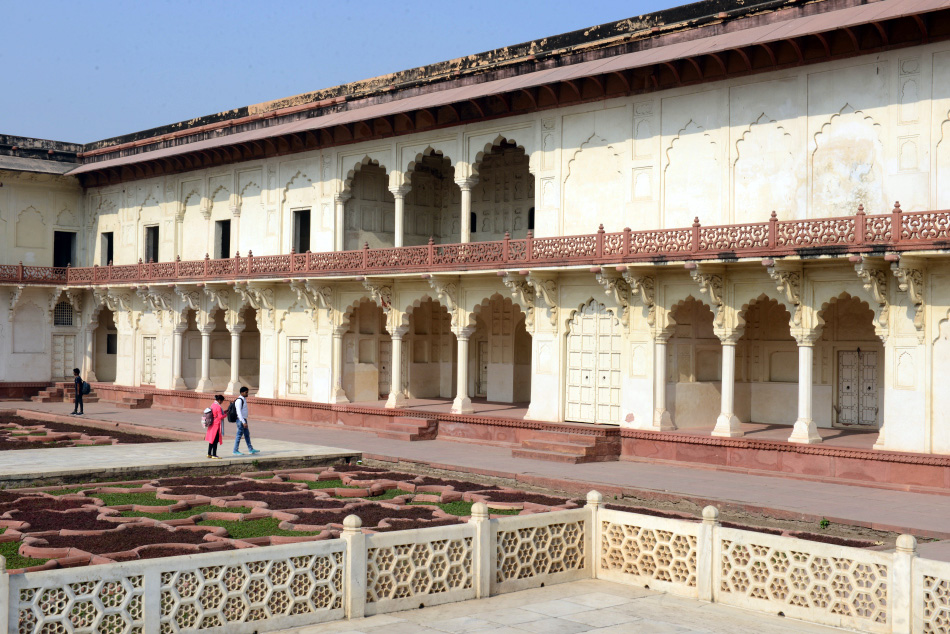 Khas Mahal was built by Shah Jahan for his daughter Jahanara and Roshanara. 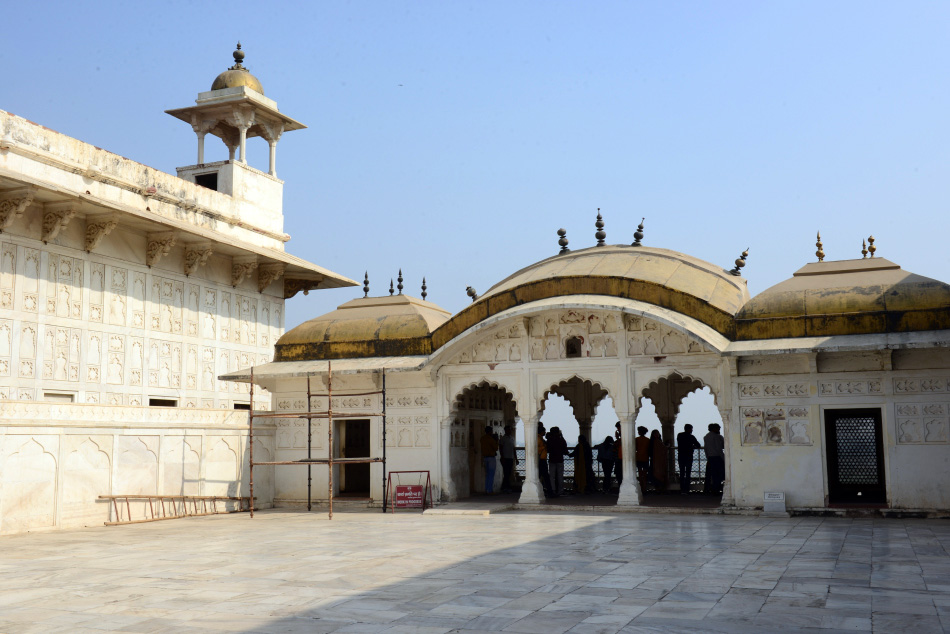 Adjacent to the Khas Mahal, covered verandahs and the marble terraces offered visitors a fantastic view of the Yamuna River.

The Musamman Burj is one of the most splendidly crafted buildings in the complex.

While Akbar built his buildings with sandstone, his grandson Shah Jahan preferred white marble just like another of his other project, the Taj Mahal.

Musamman Burj, an octagonal tower with great views of the Yamuna River, was built by Shah Jahan for his beloved wife Mumtaz Mahal.

Together with his daughter Jahanara Begum, It was here that Shah Jahan spent his last few years as a captive of his son Aurangzeb. 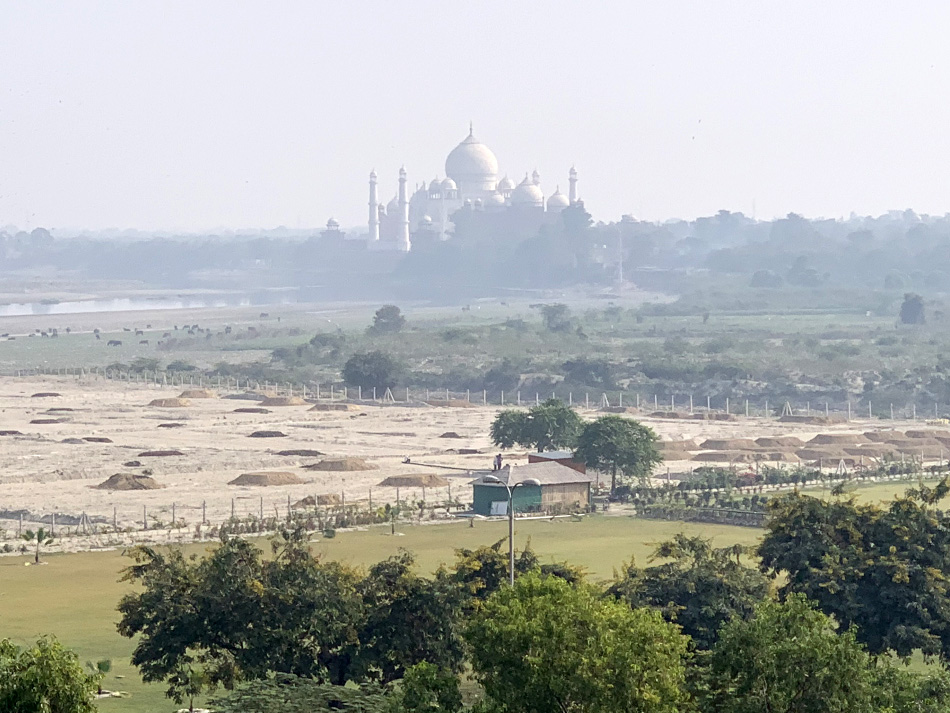 From here, Shah Jahan spent his final moments on his death bed facing the Taj Mahal, the tomb of his beloved wife.

Tourists love to take pictures against the beautiful marble lattice work.  This woman didn’t even notice the approach monkey as she posed for photo.

Known as the Gem Mosque, the Nagina Masjid is a small marble mosque built by Shah Jahan.

Built by Emperor Akbar, the Jahangiri Mahal Palace was the primary zenana to house his Rajput wives.  Compared to his grandson Shah Jahan’s buildings, Akbar’s buildings were mainly built with red sandstone.

Jahangiri Mahal Palace is one of the oldest surviving building in Agra Fort and also the largest part in the compound.

A beautiful dome ceiling at the Jahangiri Mahal Palace.

Only 30 out of 500 buildings of the Jahangir Mahal Palace survive to the present.  Many had been destroyed by Shah Jahan and later the British.

After the visit, we returned to the main entrance and hopped on an auto rickshaw to return our hotel. 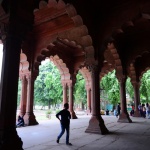 Before returning home, we had one last day of exploration in the Indian capital, Delhi.  It wasn’t the best time to visit Delhi because of the pre-monsoon heat, we did manage to check out a little bit of Old Delhi to get a taste of what many travelers described as a bustling city full of chaotic streetscapes, persistent touts, crazy traffic, tourist scams, conditions of poor hygiene, etc.  Due to the fact that it was our first time to Delhi, we selected two of the most popular attractions in Old Delhi: Red Fort and Jama Masjid.

Red Fort was the former royal palace of the Moghal Empire from the 17th to 19th century.  In the 103 hectare of land many former buildings survive inside its extensive walls.  Because of the red sandstone used for the defensive enclosure,  there comes the name of Red Fort.  Despite the noontime heat, we took our time to wander around the former royal courts and the splendid architecture from the late Mughal Empire.  We entered the complex through the famous Lahori Gate, walked through the covered bazaar Chhatta Chowk, visited the small Indian War Memorial Museum at Naubat Khana (Drum House), admired the former audience hall Diwan-i-Aam among tourist crowds, and lastly checked out the marble buildings at the inner court, including the Diwan-i-Khas, Khas Mahal, Rang Mahal, and Mumtaz Mahal (Red Fort Archaeological Museum).  The surviving buildings of Red Fort introduced us the concept of beauty and design ornaments commonly found in traditional Indian architecture.

Heading into the Red Fort through the Lahori Gate. 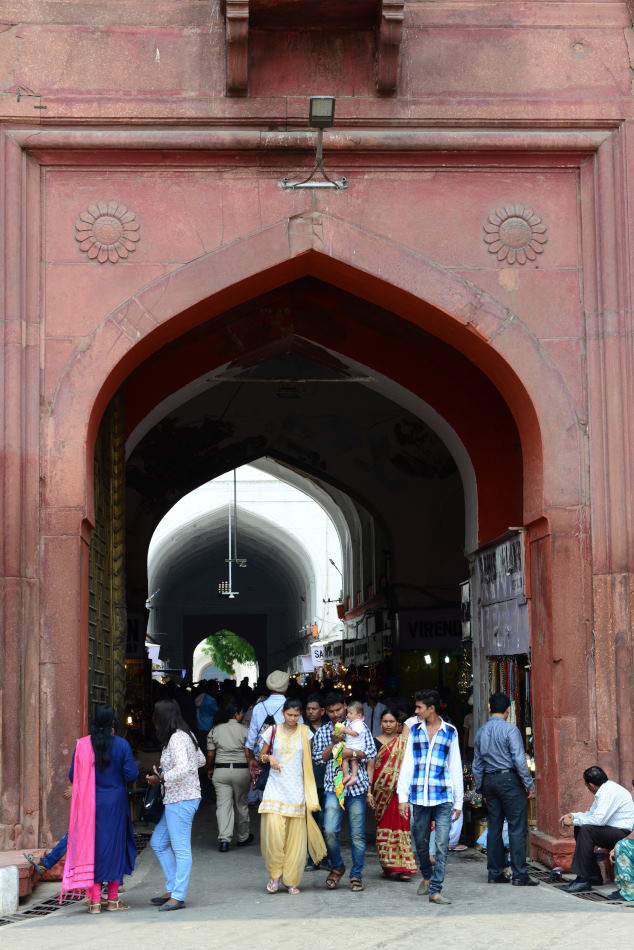 Local visitors at the Lahori Gate. 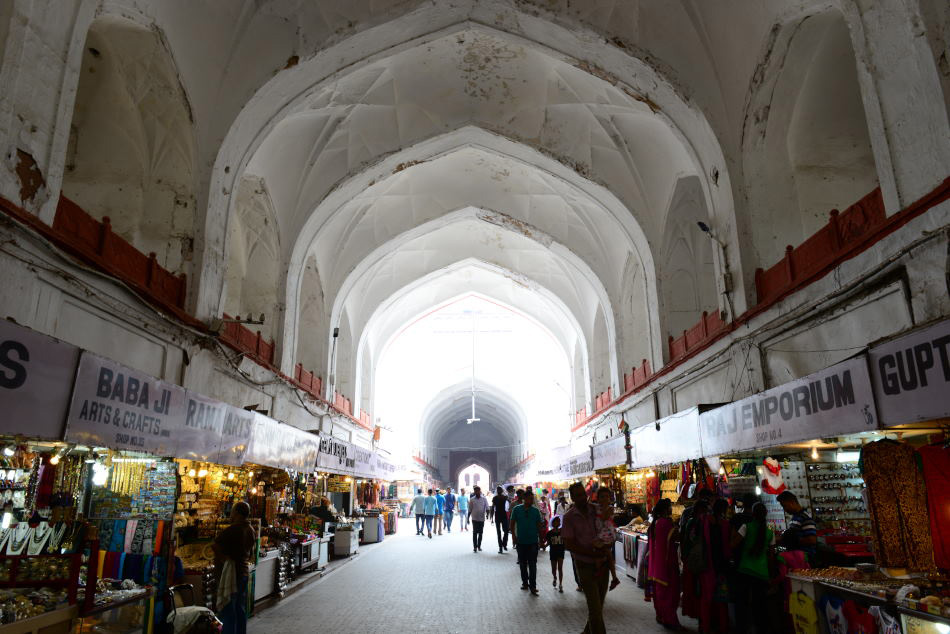 The Chhatta Chowk, which literally means the “covered bazaar”, is a unique covered market with 32 arches dated back to the 17th century. 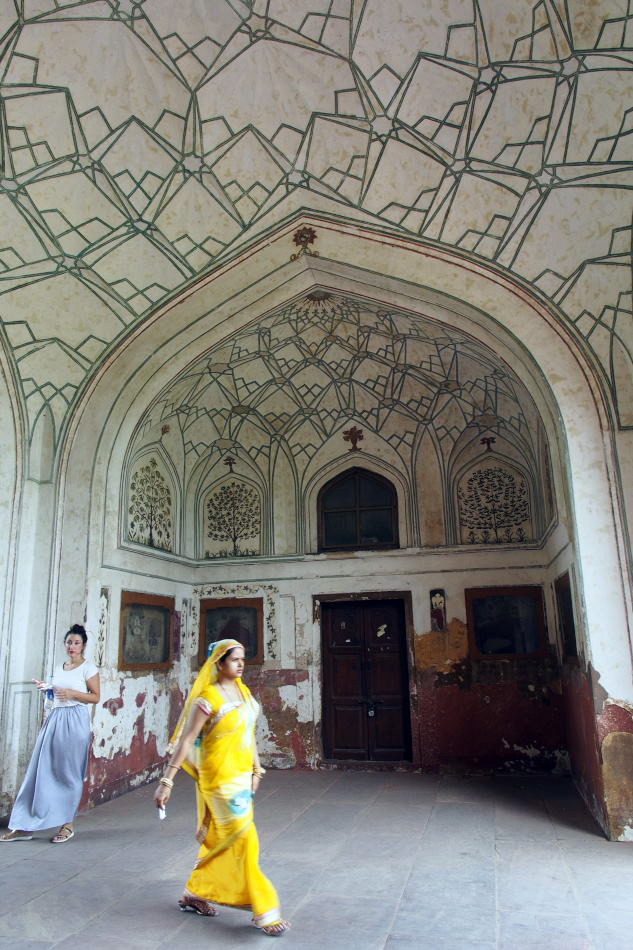 The Diwan-i-Aam (Audience Hall) was the building where the Mughal royal members received guests and the public.

The Diwan-i-Aam was consisted of 27 square bays of arches made of red sandstone.

The throne covered by a marble canopy (jharokha) is the focus of Diwan-i-Aam.

Beyond the Diwan-i-Aam stand the inner court and residence buildings of the Mughal royal family.

The Khas Mahal serves as the royal residence of the Mughal emperor.

Beautiful details made of marble and gemstones at Khas Mahal. 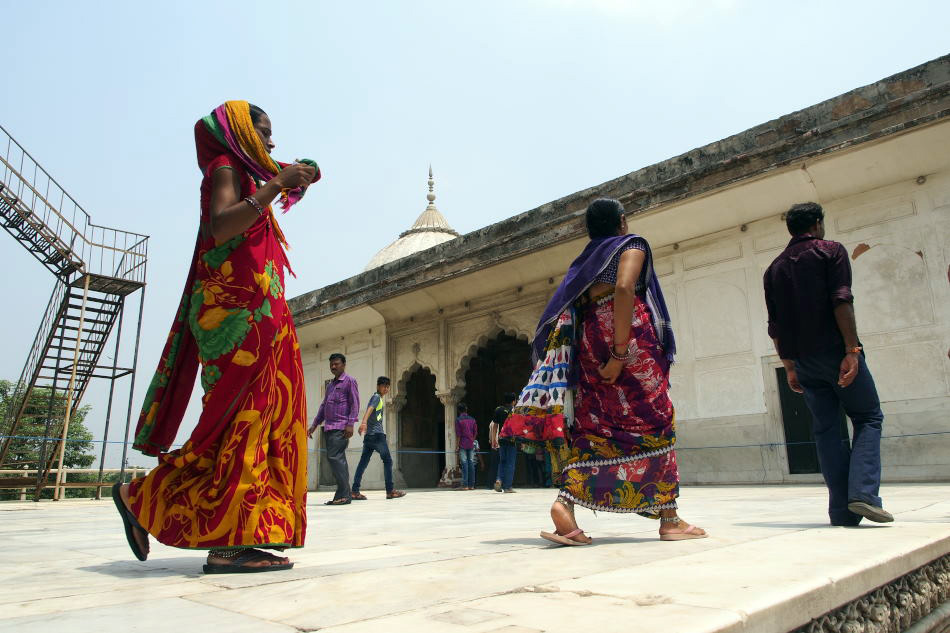 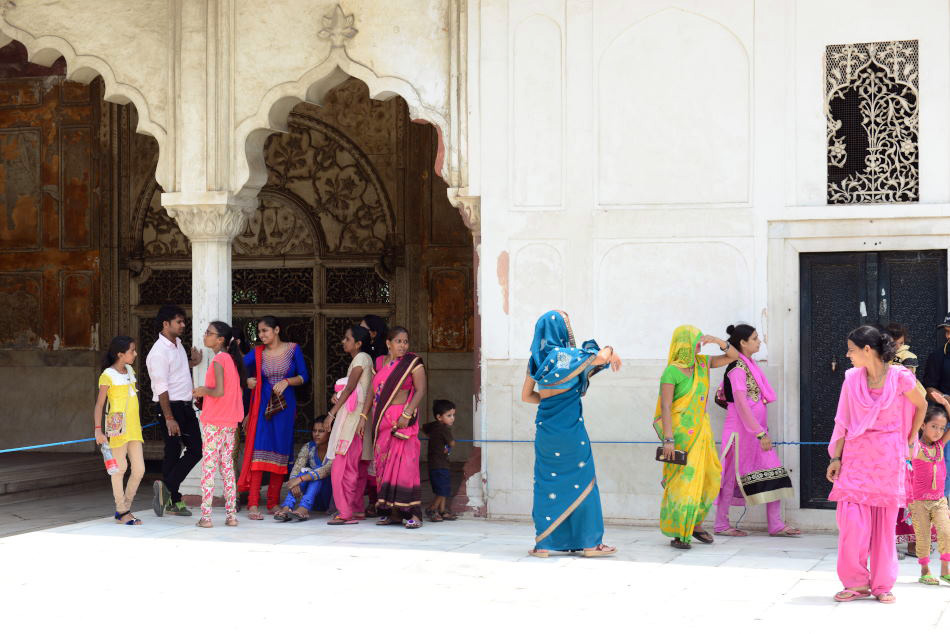 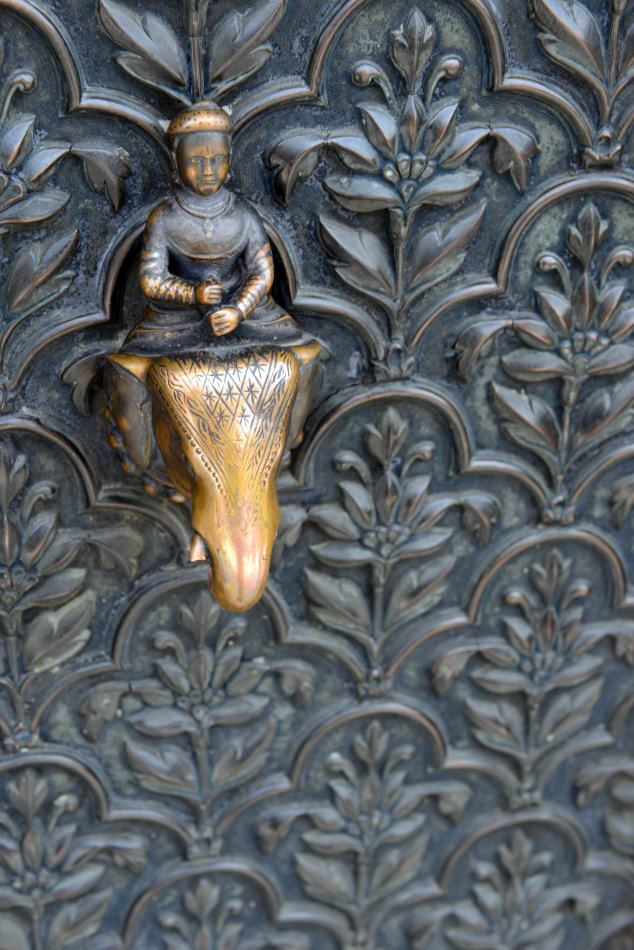 Much of the Red Fort was covered with green lawns.