On the summit of Mount Inari, there was a small Shinto shrine, and a shop selling candles and souvenirs.  The shop had yet opened its doors when we were there.  From the peak our only way was to head down.  We took our time and followed a different route to go down.  We ventured into a few quiet spots of small shrines and graves off the beaten track in the woods.  The descend was shorter than our uphill hike.  By the time we reached Yotsutsuji intersection again at midway, it was quite a different feeling with a whole lot more of visitors looking for the best lookout spot to take pictures.  We stopped by a few shrines to bow our heads, throw our coins, clap our hands and pay our respect to the Shinto deity.  As we approached the mountain foot, we were so grateful about the unique and delightful experience of the hike.  We felt a little sad for both the hike and our 5-day Kyoto trip were coming to an end.  We reached the final torii gate at around 10:40, exactly three hours from the beginning of the hike. 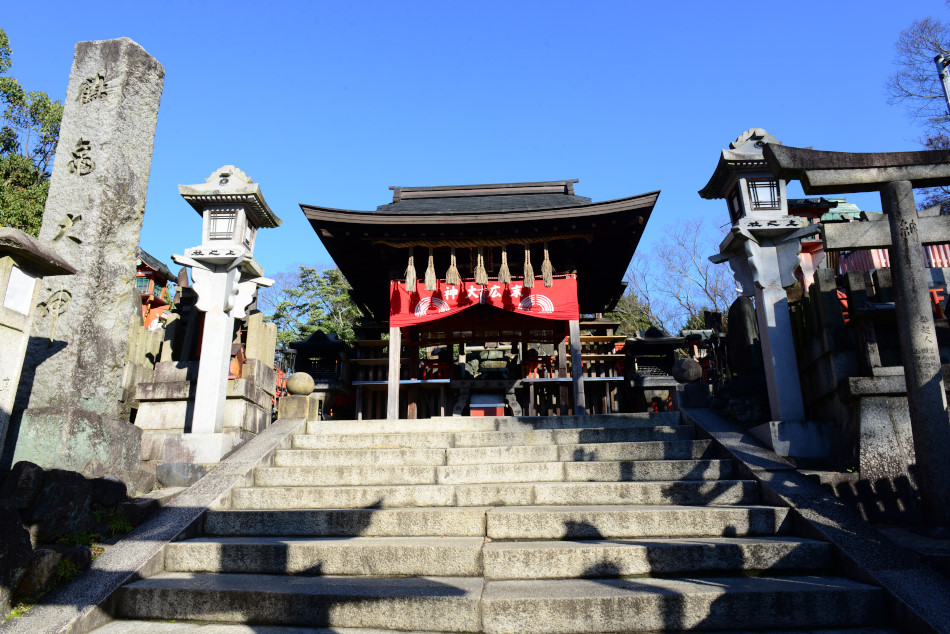 There was a small shrine at the peak of Mount Inari.  We went up, left some coins and felt grateful to have such nice weather for most of our stay in Kyoto.

The shop at the peak had yet opened its doors.

The sun was higher and certainly brighter by 9:20 when we reached the peak.

We chose a different route for the descend. 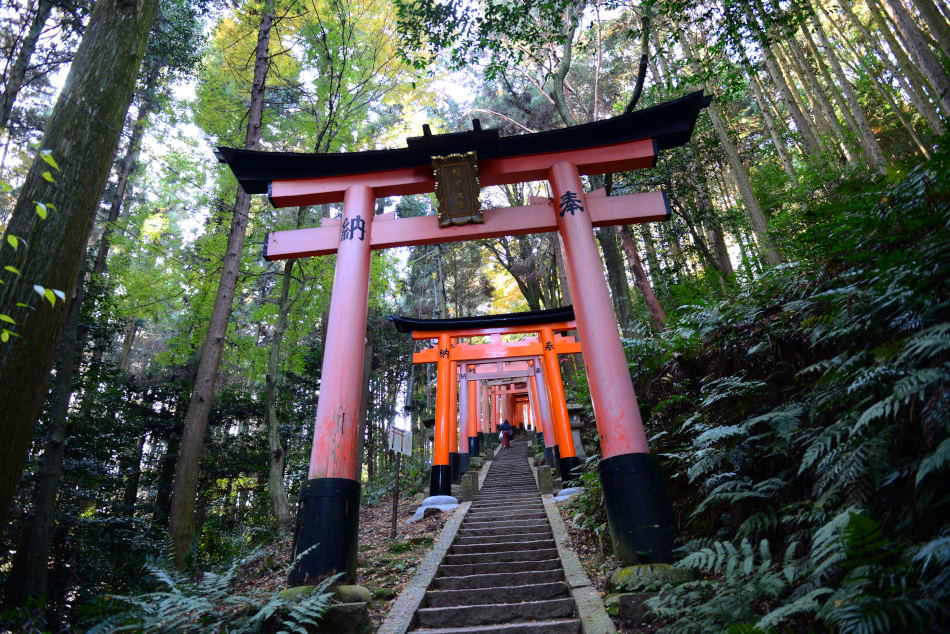 There weren’t as many torii gates along the first part of this trail, and it felt like a walk in a densely forested hill. 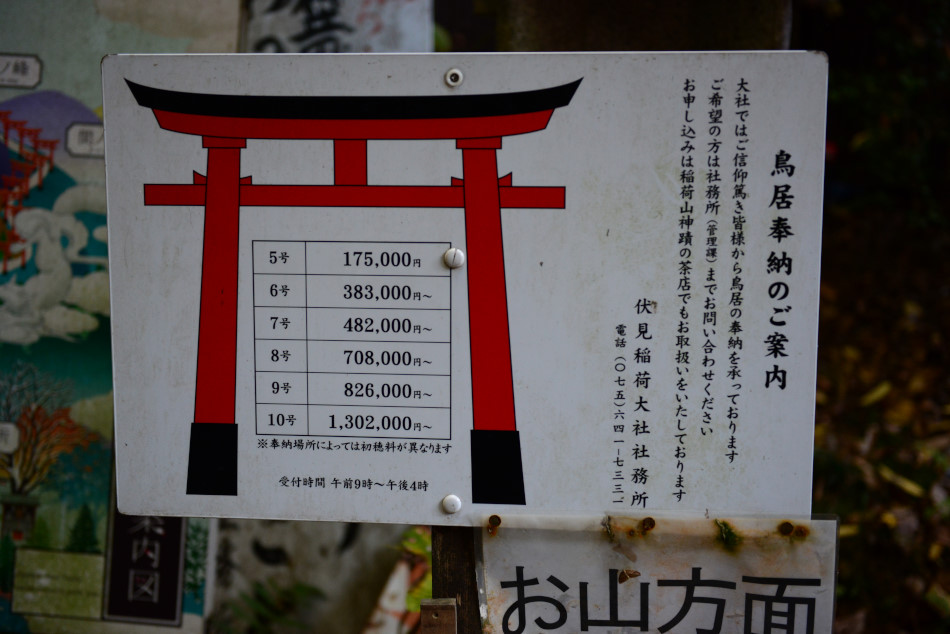 Occasionally we would see the “donation price list” of torii gate along the trail.  Anyone, and in many cases tourists, could pay 1,302,000 Japanese yen to erect a vermilion torii gate to continue the tradition of the Senbon Torii (千本鳥居).

We passed by a few shops that were preparing to open for business.

During our descend, we arrived at a forest opening where the peaceful sunlight shone through tree tops onto old graves and mini shrines.

The air was crisp and fresh.  Everything was so peaceful and serene.

There was a maintenance staff moving a few things here and there, but the atmosphere was otherwise supremely tranquil and spiritual.

No matter where we were on the trail of Mount Inari we could also find kitsune (fox) statues.

Other than stone foxes, there were also occasional stone lions. 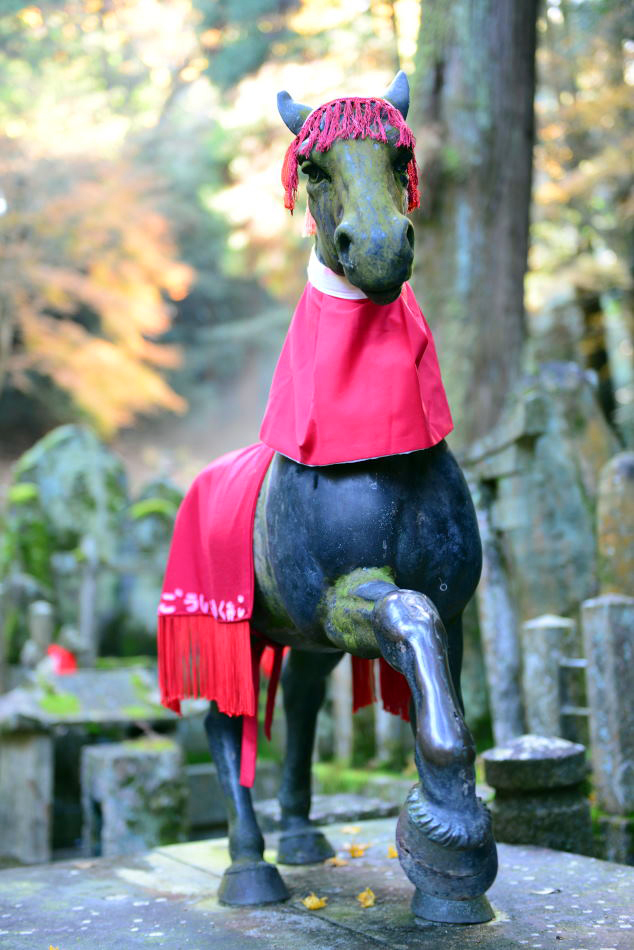 And at one shrine, there was also a bronze horse statue.

It was difficult to imagine how much work was needed to maintain all the thousands of small shrines and graves on Mount Inari, a spiritual destination ever since the first shrine was established here over 1300 years ago.

There were layers upon layers of history, memories and wishes of different generations of worshipers at different corners on Mount Inari.

Some of the temizuya (手水舎, purification pavilion) in front of the shrine was beautifully decorated.

Despite simple, some small temizuya fit perfectly well with the naturalistic surroundings.

The vermilion small torii offerings stood out no matter where they were placed. 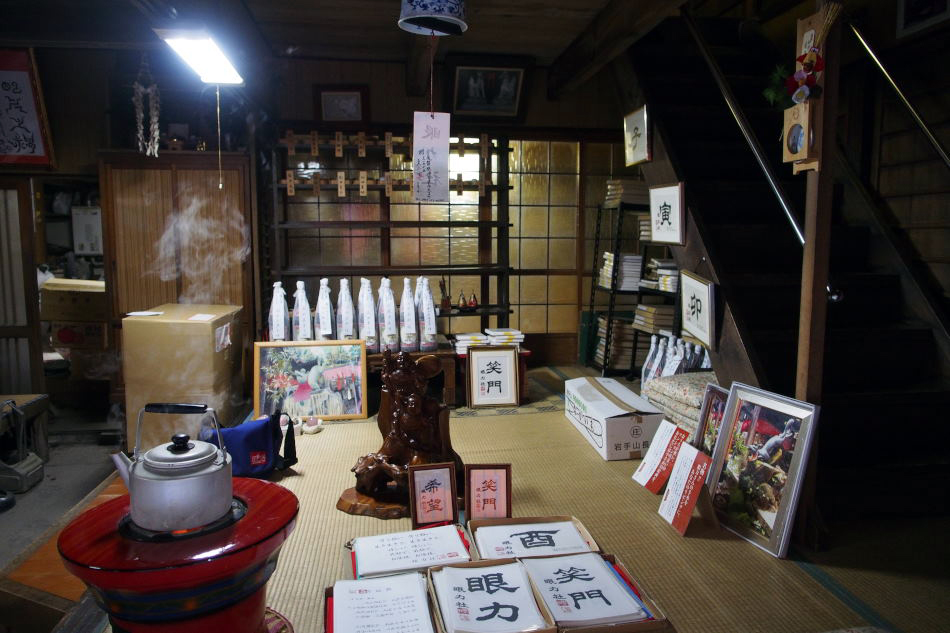 Before reaching Yotsutsuji intersection, we passed by several shops housed in traditional wooden buildings right by the trail. 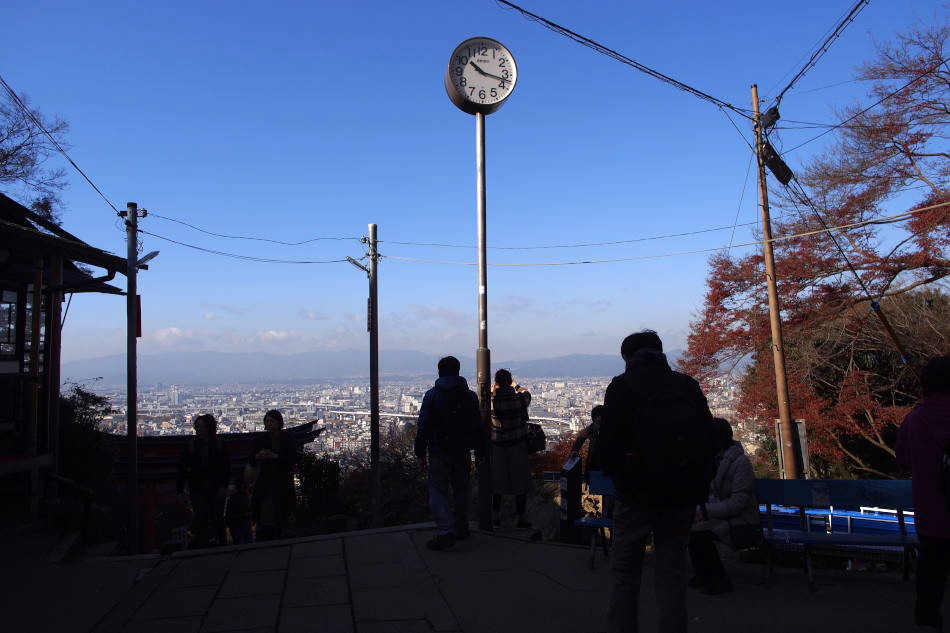 It was just past 10:15 when we returned to Yotsutsuji intersection.  The number of visitors was significantly more than earlier when we first came up.

In maybe an hour or so, the shops and tea restaurants would be packed with visitors.  The famous dish at Inari was the kitsune udon (fox udon), a bowl of hot thick wheat noodles topped with pieces of fried tofu, supposedly the favorite food for foxes. 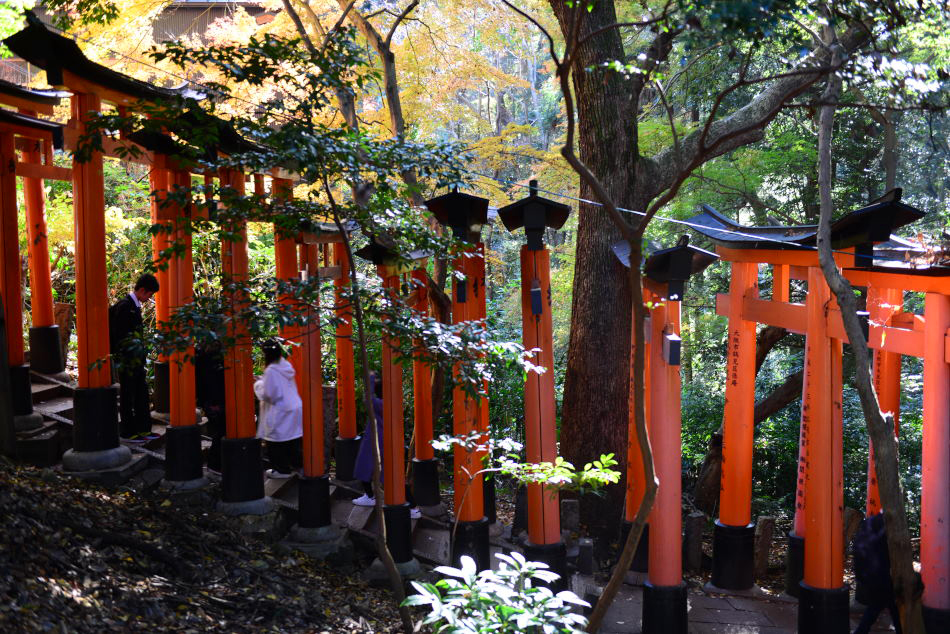 After Yotsutsuji intersection, we basically followed the same route that we came up.

One of the last shrine we passed by was Byakkosha (白狐社), a shrine dedicated to the deity of white foxes.

The vivid maples behind the last torii reminded us that autumn was almost over.  It was time for us to head back into city centre of Kyoto.