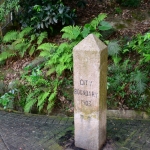 In 2014, local film Dot 2 Dot (點對點) was screened in the Hong Kong International Film Festival. The film was often described as low key, low budget and slow paced love story to the city. Amos Wong’s film explores the history and identity of Hong Kong through the encounter of a graffiti artist and a Mandarin teacher. It begins with the Mandarin teacher, newly arrived from Mainland China, discovering mysterious graffiti composed of dots at every metro station in Hong Kong. She is able to decode the graffiti by connecting the dots into meaningful imagery related to the local history of the particular neighborhood. She then comes up with her own graffiti and engages the unknown graffiti artist in a battle of graffiti riddles. It turns out that the graffiti artist is actually one of her students, who himself is a professional designer returned to Hong Kong from Canada. The movie follows both characters to explore different neighborhoods, including the quest to check out the boundary stones of the former Victoria City (維多利亞城). At the end of the film, the teacher finally realizes the true identity of the graffiti artist after visiting the westernmost boundary stone in Kennedy Town (堅尼地城). The story ends with them enjoying the peaceful sunset together at Kennedy Town ‘s praya.

Considered the capital of the former British Colony, Victoria City at the northern shore of Hong Kong island was the city’s first urban settlement. Victoria City was defined by the four “wans” (四環) or districts: Sai Wan (西環), Sheung Wan (上環), Chung Wan (中環), and Ha Wan (下環) or present’s day Wanchai. In 1903, the government erected seven stones to mark the boundary of Victoria City. The city soon expanded beyond the boundary limits and the stones became obsolete. Measured 98cm in height, tapered at the top and marked with the inscription “City Boundary 1903”, these historical boundary stones are mostly forgotten, except for history buffs who occasionally check on these urban artifacts and share their photos on the Internet. Six out of seven boundary stones survive to the present day, except the one at Magazine Gap Road in the Mid-Levels that was negligently removed by retaining wall contractors in 2007. For the remaining six boundary stones, it is possible to visit them all in a 5-6 hour hike. The hike offers hikers an interesting opportunity to walk around the old city centre, from the waterfront of Kennedy Town, halfway up the Victoria Peak and down to the Happy Valley Racecourses to the east. 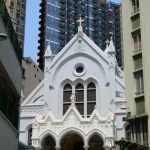