Last time when we first visited Delhi, we only had time to see the Red Fort and Jama Masjid.  Similar to last time, we had a few hours of stopover time before flying back to Hong Kong.  After lunch at Khan Market, we spent the day in the area of Nizamuddin, a busy Medieval neighborhood with narrow lanes and community mosques.  The famous Humayun’s Tomb is the biggest draw for visitors in the area.  From the closest metro station Jawaharlal Nehru Stadium, it was a ten minute walk to the enormous tomb ground.  Despite the short distance, crossing the dusty roads, walking under flyovers, and finding ourselves towards the right park entrance was not as straightforward as we thought.  Anyhow, we managed to arrive at a rather chaotic queuing scene at the ticket office.

Commissioned by Empress Bega Begum for her husband Mughal Emperor Humayun, Humayun’s Tomb was built in 1569-70 in Delhi’s Nizamuddin East.  Designed by Persian architects Mirak Mirza Ghiyas and Sayyid Muhammad, Humayun’s Tomb was the first large scale structure made with red sandstone. Declared a UNESCO World Heritage, the splendid structure had set a fine standard for latter Mughal architecture, including the Taj Mahal.

After obtaining the admission tickets, we entered the complex of Humayun’s Tomb through a series of gateways and courtyards. 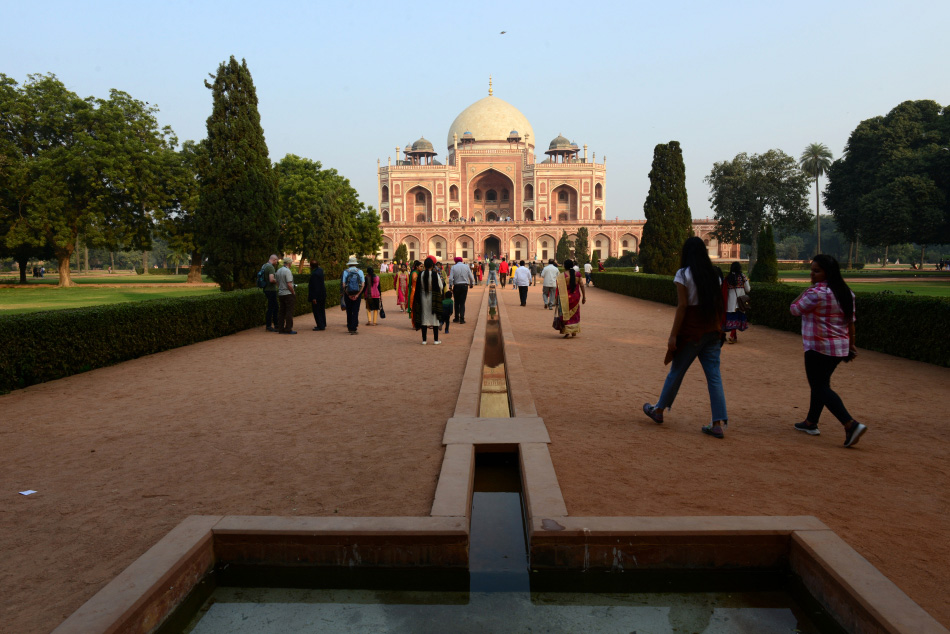 We followed a prominent water channel towards the beautiful sandstone building of Humayun’s Tomb.  Reference to Char Bagh (Four Gardens) of the Paradise in the Koran, the tomb garden is a 30-acre square carved into smaller squares by paths and water channels. 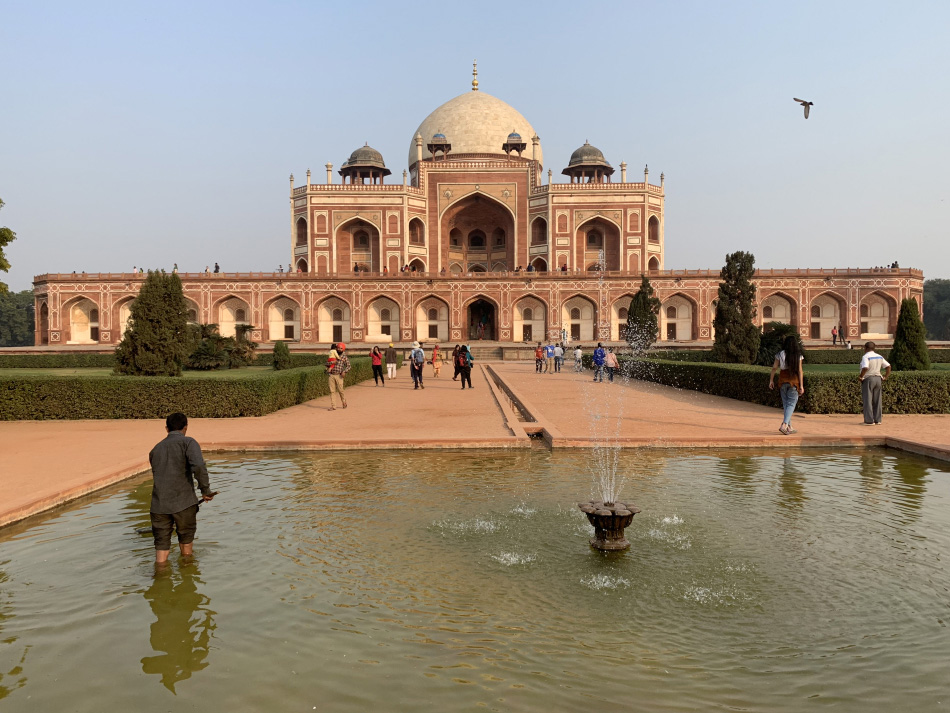 The tomb structure reaches a height of 47m, with obvious influences from Persian architecture.  The entire structure sits on a large platform with a few meters high.

The arch and beam structure together with the use of red sandstone, white marble, and Rajasthani decorations exemplifies the Mughal architecture lasted in India for four hundred years.

The red sandstone and white marble provide a splendid combination of facade treatments and decorations.

Modeled on the Paradise Garden in Koran, the garden is divided into 36 squares by axes of water channels and paths.

Just like a few other attractions, we encountered a large group of school students at Humayun’s Tombs.

Entrance dome of Humayun’s Tomb was decorated with elegant lines. 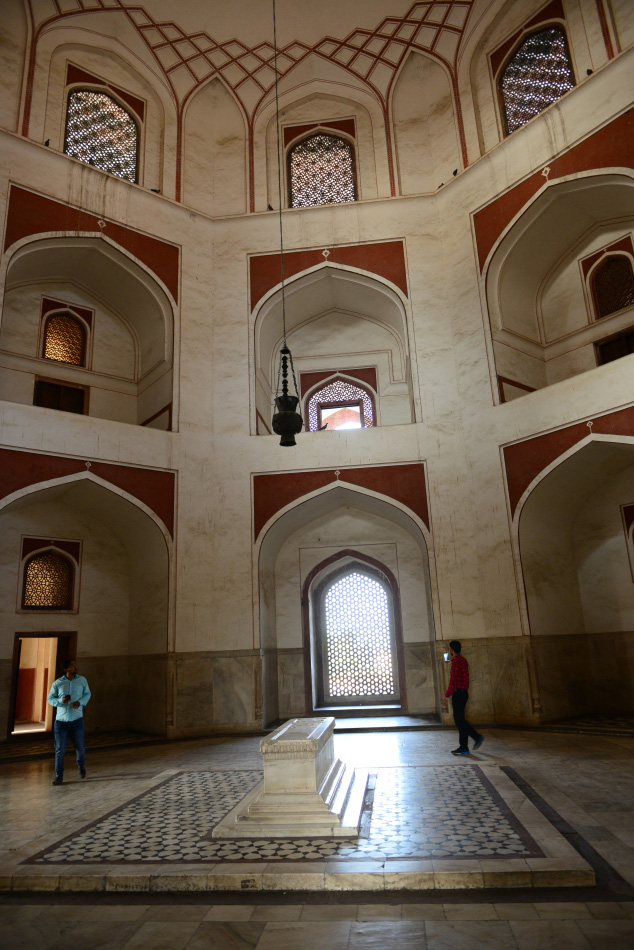 Much less crowded than the Taj Mahal, visitors could appreciate the solemn interior of the mausoleum.

The main level houses the cenotaph of Emperor Humayun and Empress Bega Begum and also several other Mughal rulers from a later period.  The real graves lie one level before in the basement.

Inspired by Persian garden, the 30 acre tomb garden is subdivided by a network of water channels.

After visiting the interior of the tomb, we circled around the structure on the upper platform. 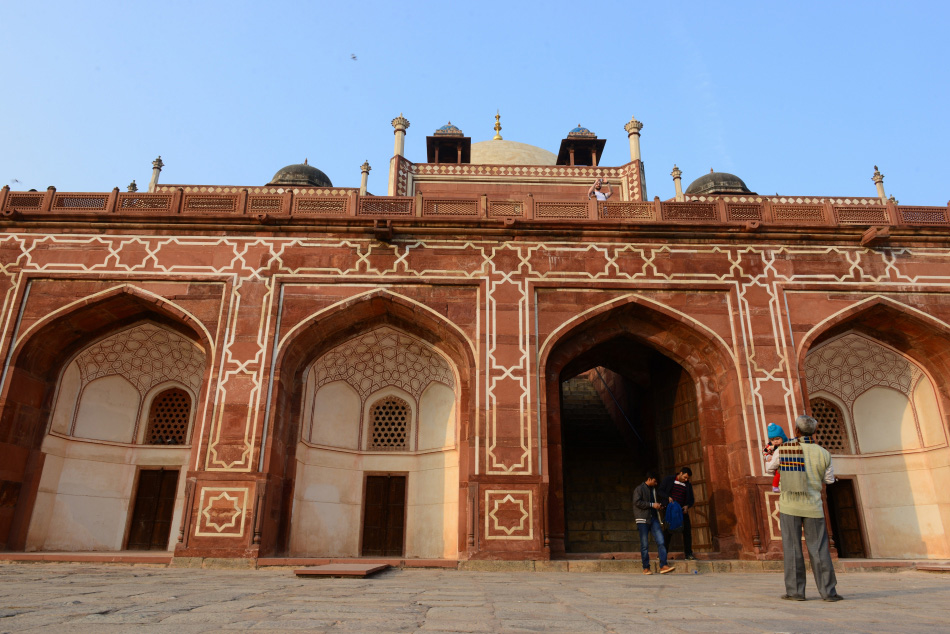 We returned to the garden at the ground level via one of the four covered staircases.

As we left the complex, the late afternoon sun cast a warm amber tone on the white marble and accentuated the reddish tone of the sandstone.

A final view of the front facade of the building before we left the complex.

Near Humayun’s Tomb, there is another magnificent tomb architecture known as Isa Khan’s Tomb.  Built in 1547 – 58, the octagonal structure is decorated with canopies, glazed tiles, lattice screens, and a prominent verandah.