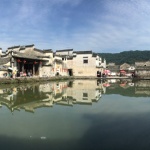 In year 2000, the sleepy village of Hongcun stepped up onto the international stage after it was Inscribed in UNESCO’s World Heritage List, as well as appearing in a number of movie scenes of Coughing Tiger and Hidden Dragon.  Since then, Hongcun has become a tourist hotspot in Anhui, second only to the scenic Huangshan.  First inhabited over 900 years ago during Southern Song Dynasty, the well preserved village of Hongcun is considered one of the greatest examples of fengshui village in China.  Hongcun’s layout was known as “cow” configuration, in which the village’s significant components, such its trees, water ponds, lakes, bridges, etc. were put together in an order that metaphorically resembled the shape of a cow, from its horns to legs, and stomach to intestines.  In fact, the “cow” configuration of Hongcun was based on a fengshui master’s decision during the Ming Dynasty, who suggested the “cow” configuration as the perfect fit for the spirit and landscape of the site.

Another crucial feature of Hongcun’s design was its water network.  Similar to the inner system of a cow, water was led through the entire village, passing in front of each individual home within the village boundary.  Apart from daily water use, the water system also served as a means for fire safety and micro-climate control.  The Moon Pool (月塘/ 月沼) at the village centre, referred as the cow’s stomach, and the South Lake (南湖), referred as the cow’s belly, served as the two filtering water bodies before water returned to the natural river system outside Hongcun.

Apart from its fengshui and water system, Hongcun is also well known for its well preserved Huizhou (徽州) architecture.  Huizhou was a historical region in China, encompassing Southern Anhui and Northeastern Jiangxi.  Just as the Laojie of Tunxi, Huizhou architecture in Hongcun are mainly building complexes made of white washed walls and dark tiled roofs.  While most of Huizhou architecture at Tunxi’s Laojie are shops and mixuse buildings, in Hongcun there are all kinds of Huizhou buildings preserved, from courtyard homes to ancestral halls.

Located in Yi County about 85km from Tunxi, Hongcun is easily accessible by public bus.  From Tunxi, we took a bus to the nearby town of Yixian, where another local bus took us for the last 10km to reach Hongcun.  It was a Sunday.  We arrived at the South Lake (南湖) of Hongcun in mid-morning and were immediately overwhelmed by the sheer amount of local tourists and art students arrived before us.  In the mirror perfect reflection of Hongcun and its picturesque arch bridge, we could the magnificent Huizhou architecture, blue sky, waterlilies and groups after groups of tourists entering the village.  In an attempt to avoid an over-touristy “theme-park” experience, after we crossed the bridge of South Lake we immediately found our way through a series of narrow alleyways some way off the central path where most tourists entered the village.  Once inside, wandering around the crisscross alleyways leading to the Moon Pool (月塘/ 月沼) proved to be a much enjoyable experience.  At a courtyard house converted guesthouse, we enjoyed a local meal with fresh taste of the countryside.  Visiting some of Hongcun’s fascinating courtyard complexes and ancestral halls filled with exquisite wooden carvings and antique furniture was definitely memorable.  Although quite a number of houses in Hongcun had been converted for tourist businesses, some original villagers still remained in the village, and could be seen doing laundry at the Moon Pool, or washing rice at water channel in front of old courtyard houses, or drying herbs and flowers along the village alleyways. 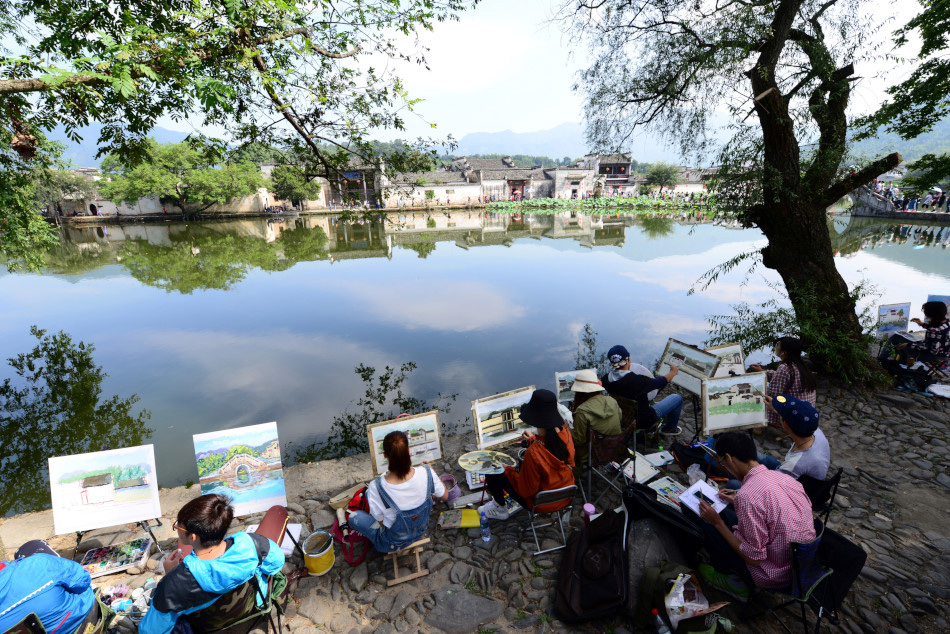 Art students gathered along the shore of South Lake with their easels, paper and colour plates.  Through compositions of colours and strokes, each student had a different expression of Hongcun. 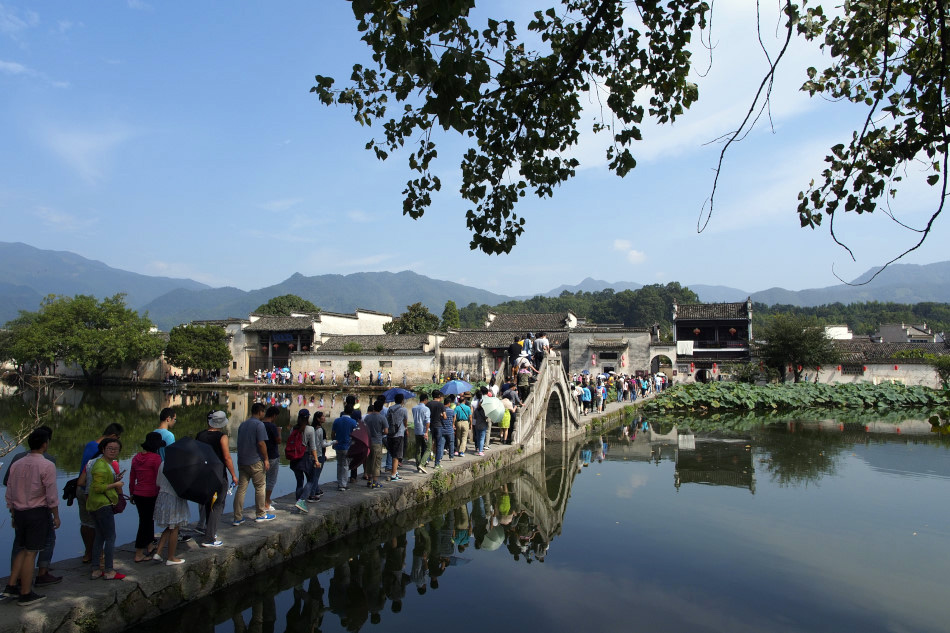 The stone bridge crossing the archer-bow shaped South Lake provides an elegant entry into Hongcun. During our visit, there was a long queue crossing the bridge. 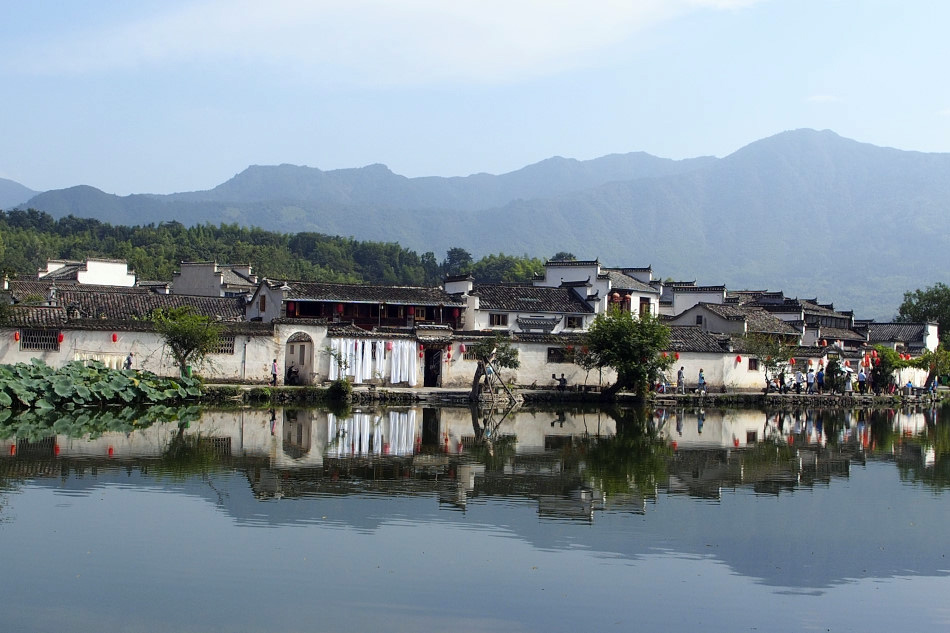 The natural setting of Hongcun is picturesque. The South Lake produced perfect reflections of the Huizhou buildings and the surrounding scenery. 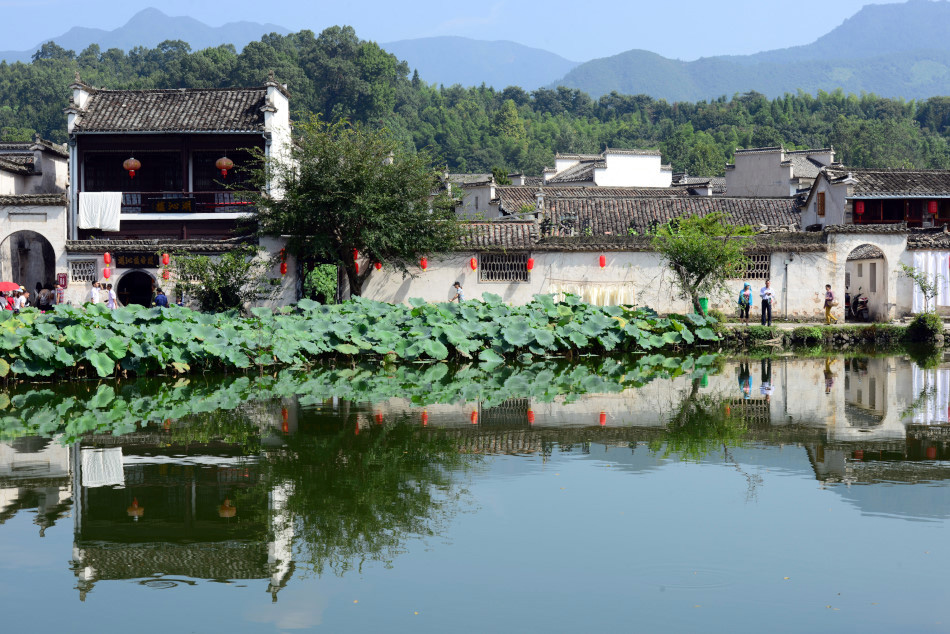 Huge water lilies were planted at the entrance of Hongcun.

Narrow lanes crisscross the entire village.  Getting lost in the network was an enjoyable experience. 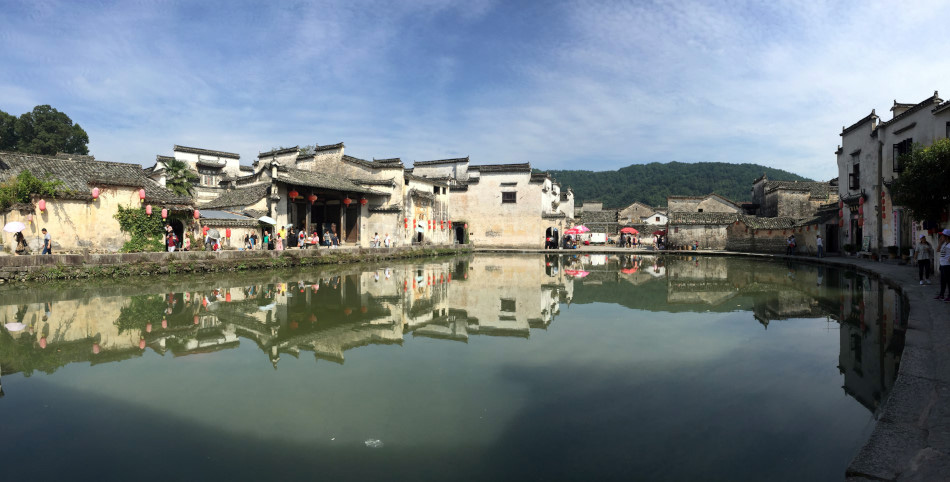 The magnificent Moon Pool was the focal point at the heart of Hongcun.

Because of its beauty, the Moon Pool was also a magnet for tourists. 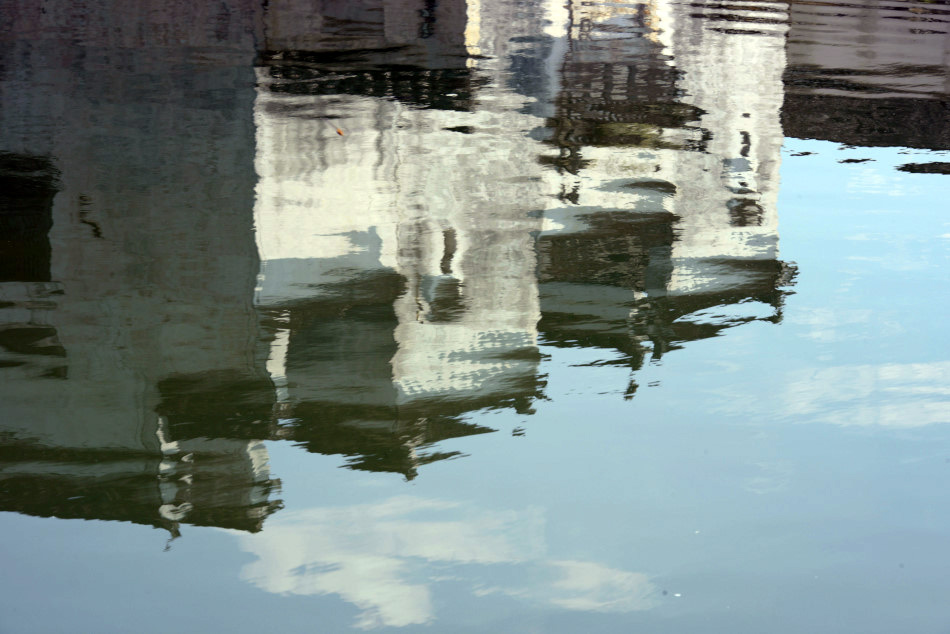 The reflection of Huizhou architecture in the Moon Pool resembled a great Impressionist painting.

Built in 1403, the Wang’s Ancestral Hall or Lexu Hall (樂敘堂) was the architectural gem along Moon Pool. 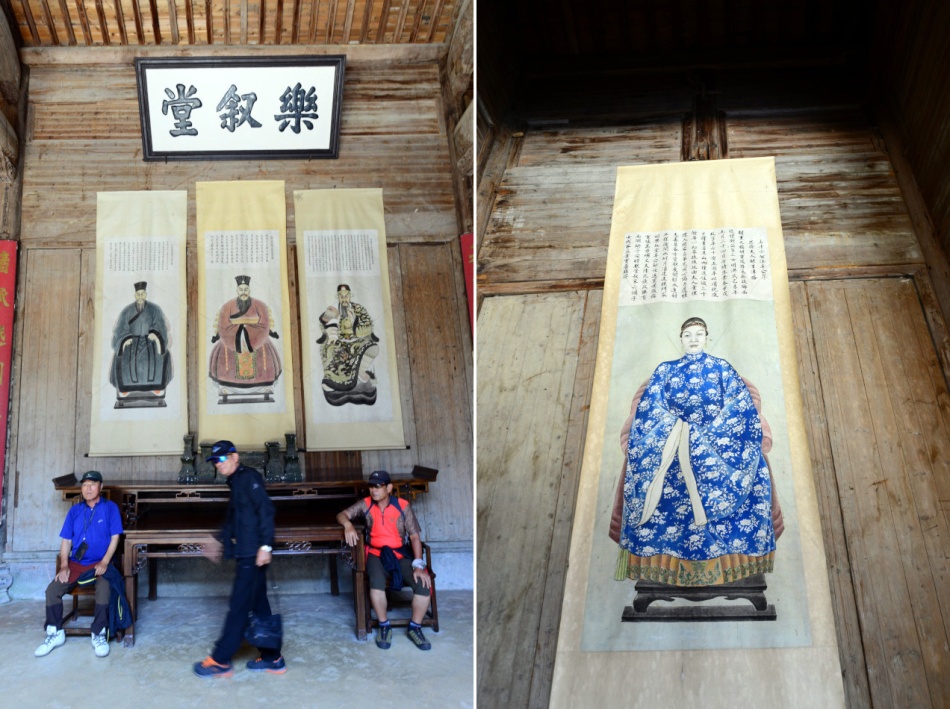 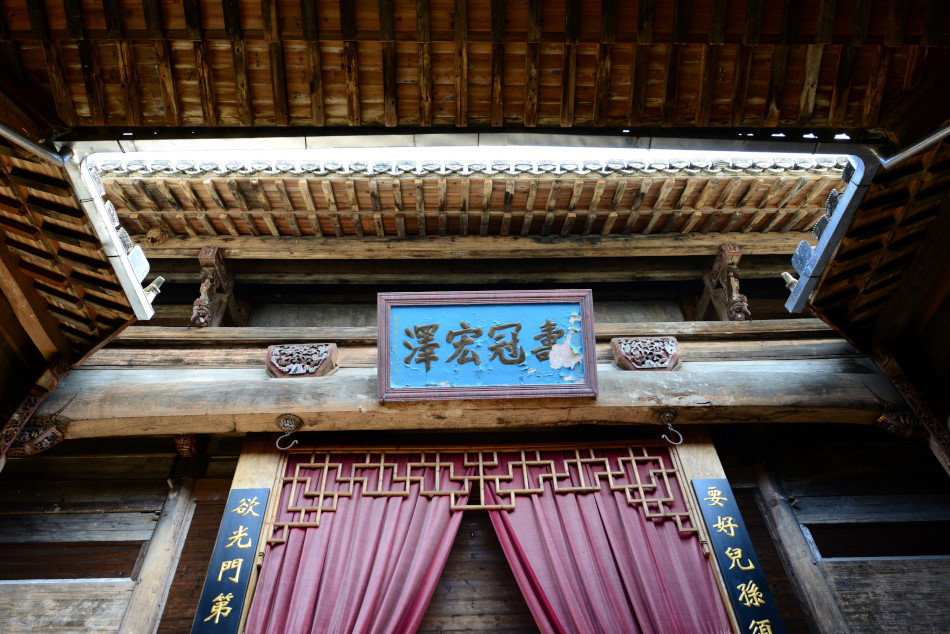 The well-preserved wooden architecture could be seen throughout Lexu Hall, including the inner ancestral hall. 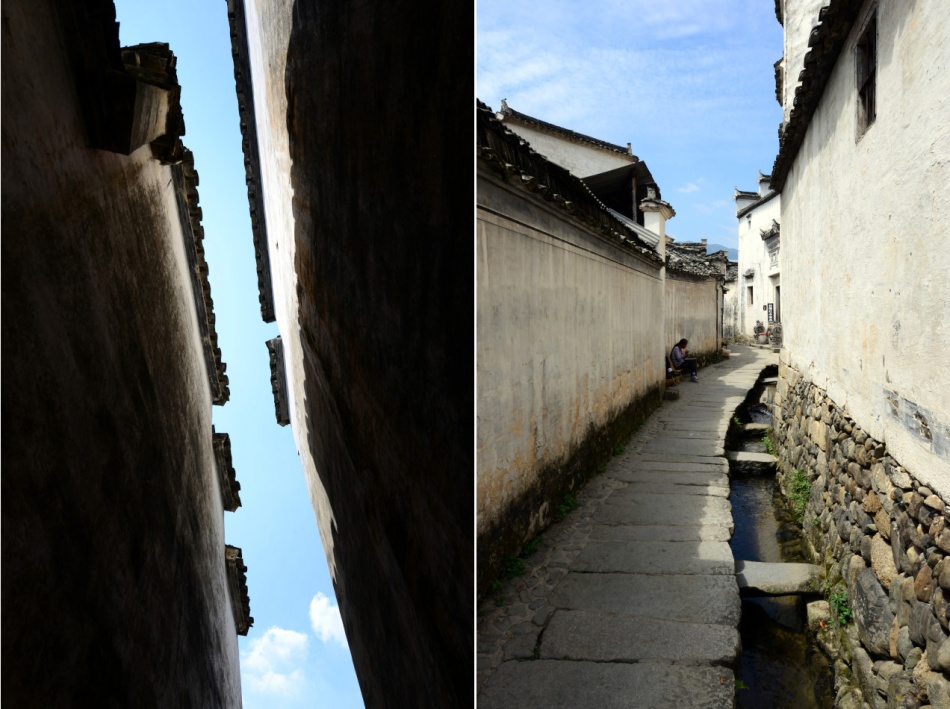 Fed by water diverted from Jilin Stream which originates from a spring in the hillside behind the village, Hongcun’s intestinal network of water channels runs past the front of each house. 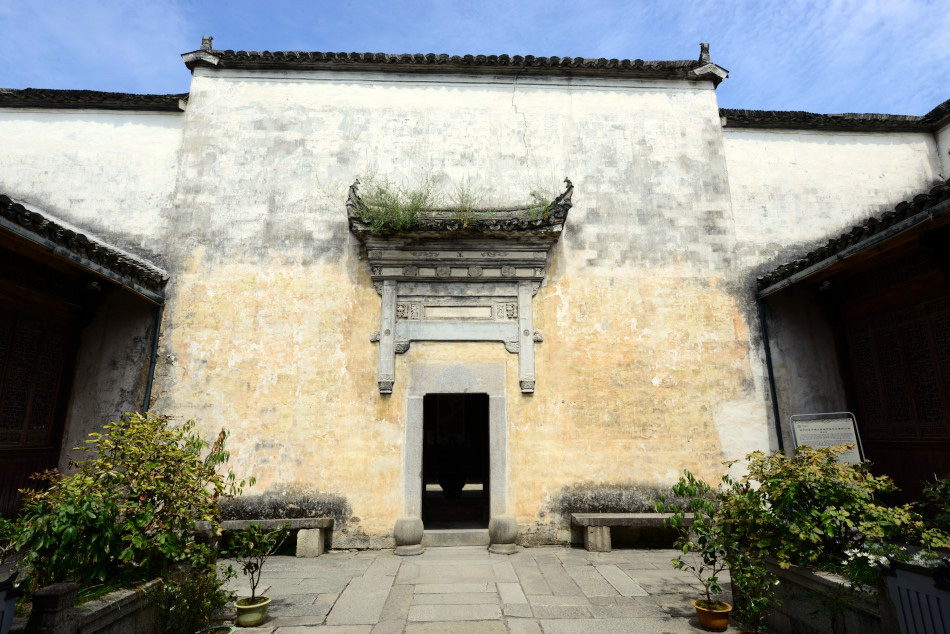 Chengzhi Hall (承志堂), a historical home of a wealthy business in the Qing Dynasty, is another famous complex in Hongcun. 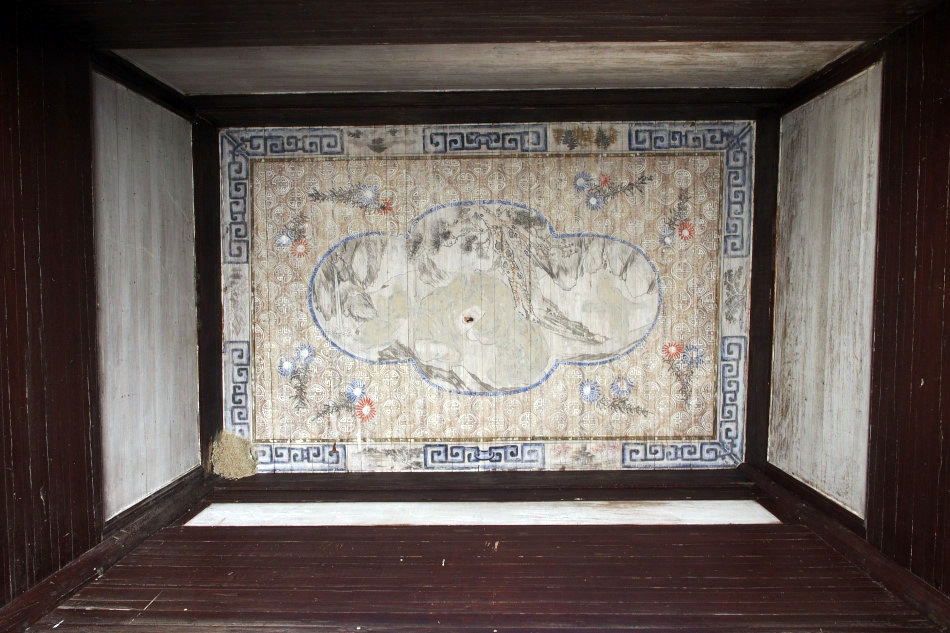 Built in 1855, Chengzhi Hall is famous for its Huizhou architectural details, including painted ceilings.

Chengzhi Hall’s most fantastic feature is undoubtedly its wooden carvings. 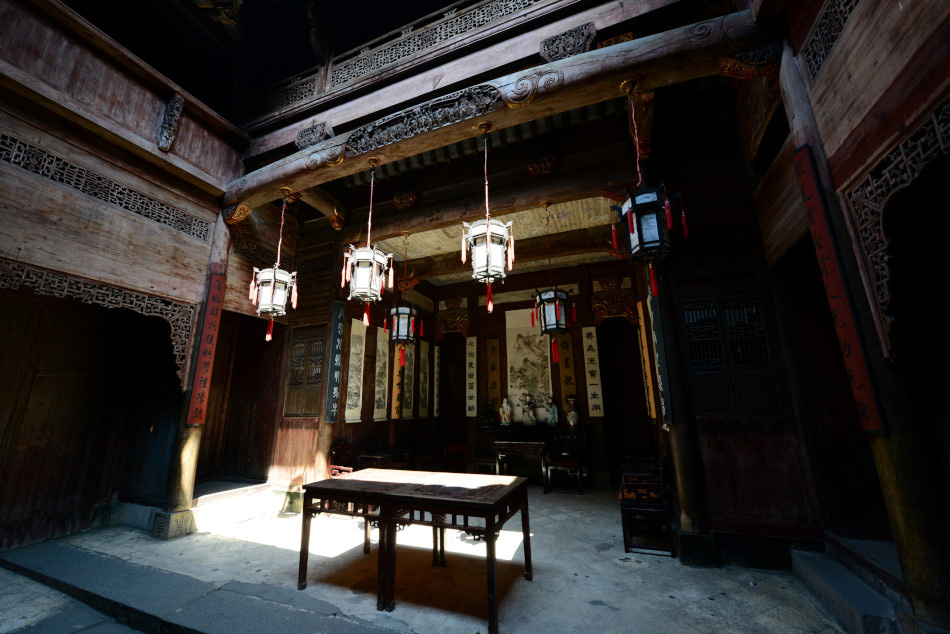 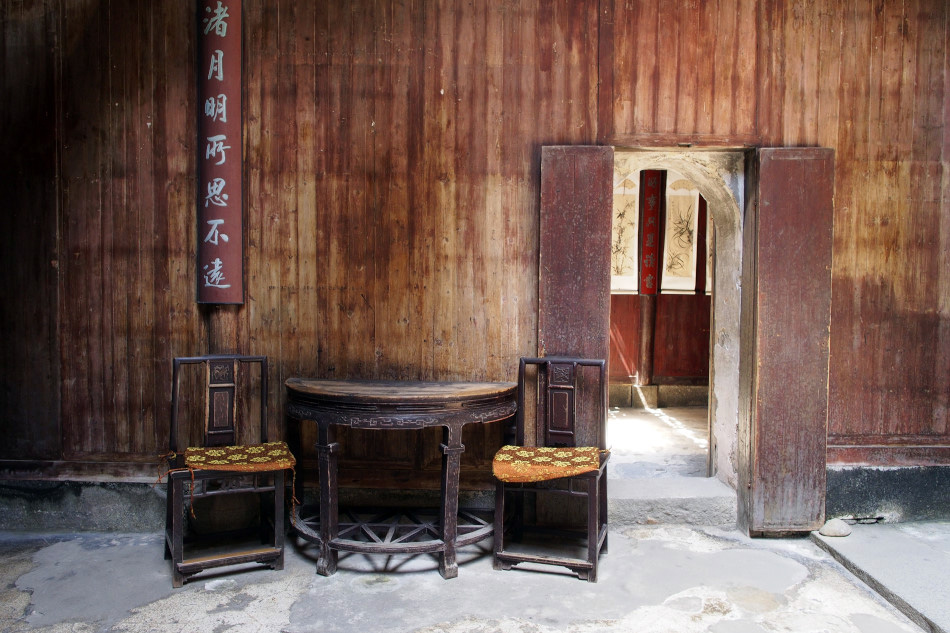 Semi circular table and the antique chairs revealed the social habit of the former dwellers.

In Chengzhi Hall, there is a quiet chamber and private courtyard belonged to the former treasurer of the family.  It was designed according to fenshui for “keeping the money from flowing out of the house”.  Water was led into this corner of the complex and entered a fish pond.  The wooden balcony overlooking the fishing pond reminded visitors even the treasurer could enjoy a pleasant living environment along with the host family. 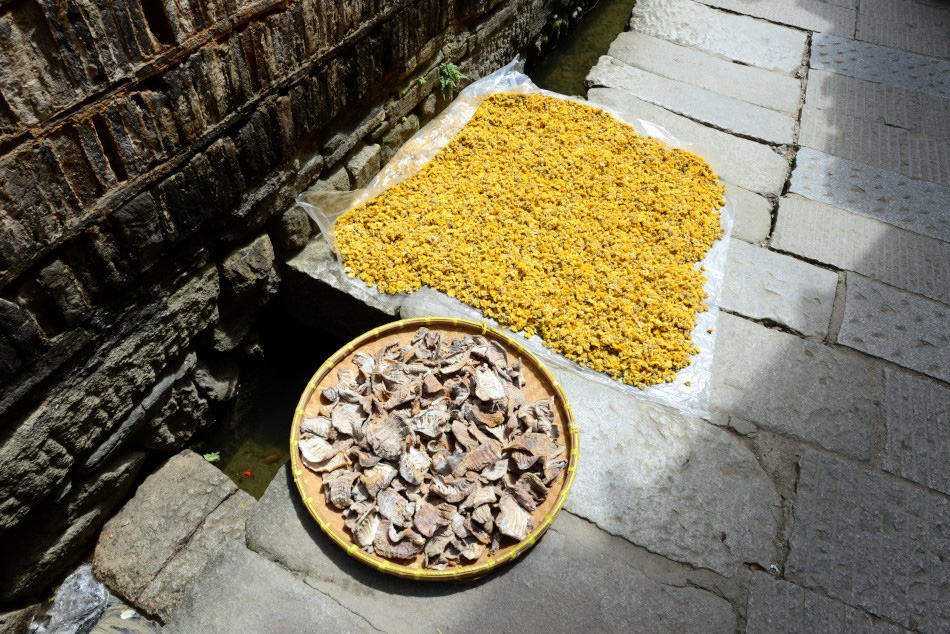 Hongcun is still inhabited by local residents. We get a glimpse of the local life from the hanging laundry and sun-drying herbs and flower buds in the alleyway.

In the afternoon, many tourist groups were gone.  The village regained its tranquility.  Standing on the narrow stone bridge at South Lake, the picturesque Hongcun appeared in perfect harmony with nature.  If we have a second opportunity visiting this lovely village again, we will definitely choose to spend a night in Hongcun in order to truly appreciate its rural beauty in the harmonic serenity of water and sky.