140km north of Tokyo, Nikko (日光) is one of the most popular excursion destination out of the Japanese capital.  Dotted with onsen villages, ancient cedar forests, scenic waterfalls, turquoise lakes and lush green mountains, the magnificent piece of landscape is also the final resting place of Tokugawa Iayasu (徳川家康), the founding shogun of the Tokugawa shogunate from 1600 until Meiji Restoration in 1868.  The Shinto mausoleums of Tokugawa Iayasu and his grandson Tokugawa Iemitsu (徳川家光) in Nikko are part of  “Shrines and Temples of Nikkō” inscribed in the UNESCO’s World Heritage in 1999.  These historical sites draw huge crowds of visitors daily to the otherwise sleepy hilltown of Nikko.

There were so much to do and see in Nikko but we could only do a very long day trip this time.  We booked the earliest direct train, Tobu Railway’s Revaty Limited Express leaving Tokyo’s Asakusa Station at 06:30, and the last return train leaving Nikko at 19:18, leaving us about 11 hours in Nikko.  We also got the Nikko All Area Pass,  which covered our local bus fares in the Nikko and Chuzenji Lake area and discount on the Tobu train tickets.  We planned to check out the shrines and temples in the morning, and then visit the scenic Chuzenji Lake (中禅寺湖) and Kegon no taki (華厳の滝, Kegon Waterfall) in the afternoon.  As soon as the Revaty train pulled into Nikko Station at around 08:20, we were excited to see the beautiful weather.

Our journey to Nikko began from Tobu Asakusa Station (浅草駅), a monumental terminal building constructed in 1931.

In order to take the 6:30 Revaty Limited Express, we had no choice but to get up early and left Shibuya at about 5:30.

The train arrived in Nikko at around 08:20.  We hopped onto a Tobu bus in front of Nikko Station for the nearby temple and shrine area.  Attempting to avoid the crowds later in the day, we decided to first visit Toshogu Shrine (東照宮), the single most popular attraction in Nikko. 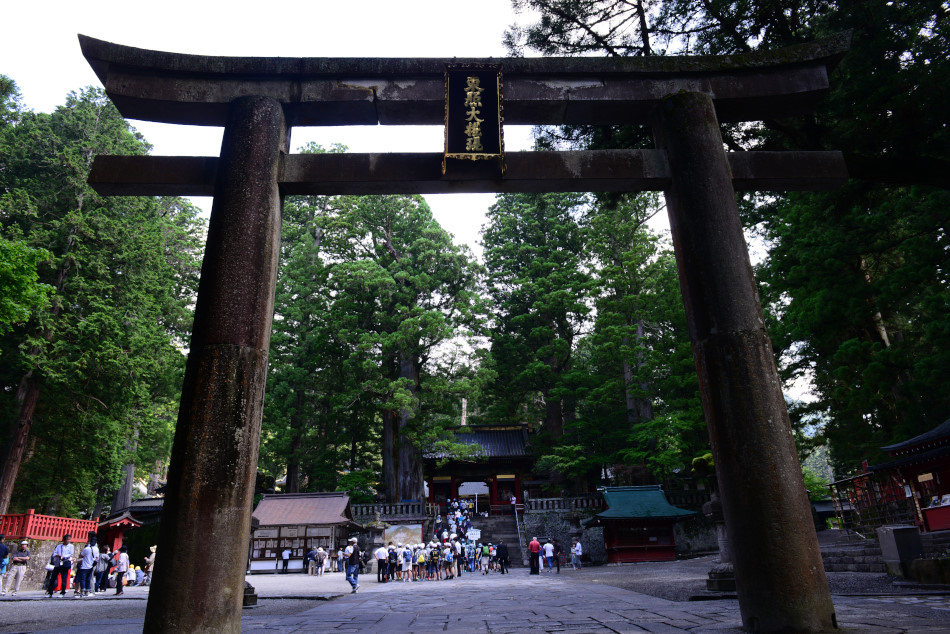 Toshogu Shrine is the mausoleum of Tokugawa Ieyasu, the founder of Tokugawa Shogunate that ruled Japan for 250 years until Meiji Restoration in 1867.  Because of its historical significance, the shrine is highly popular among local Japanese.  After a short walk along the procession route, we entered through Ishidorii (Stone Torii Gate), a beautiful timber gateway erected by the powerful feudal lord Kuroda Nagamasa, into the shrine complex.

Despite our early arrival, the Toshogu Shrine was already full of student groups and tourists.  We passed by a group of students below the Gojunoto (Five-Story Pagoda) as we entered the complex.

We entered the central complex through Omotemon Gate (Front Gate) or Nio Gate that is guarded by a pair of Nio (仁王) guardians. 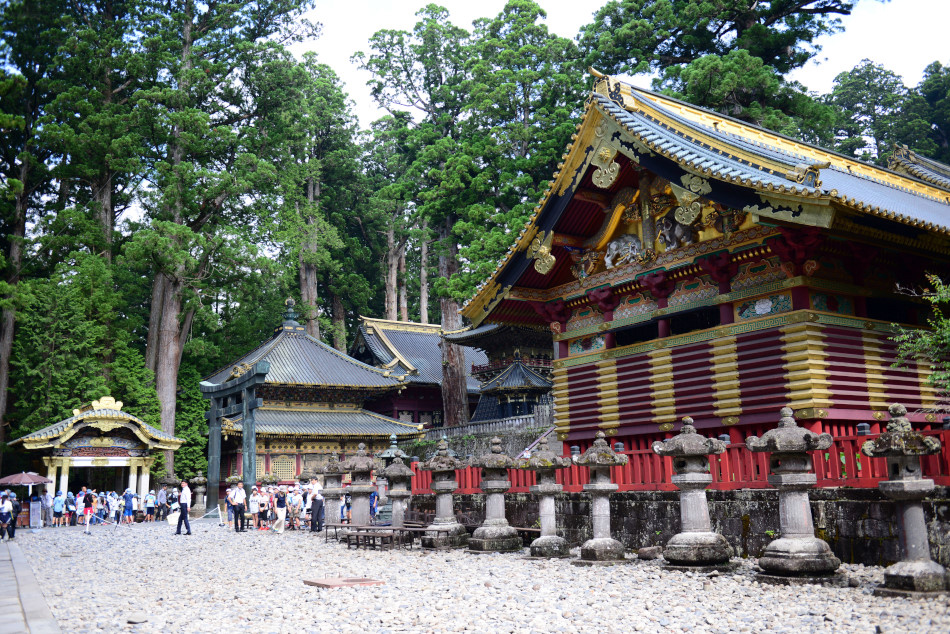 Once entered the forecourt, we could already appreciate the meticulous relief carvings and vivid architecture features on the Sanjinko (Three Sacred Storehouses).  Toshogu presents quite a contrast compared with most other Shinto shrines that are usually minimalist in design and natural in colour tones. 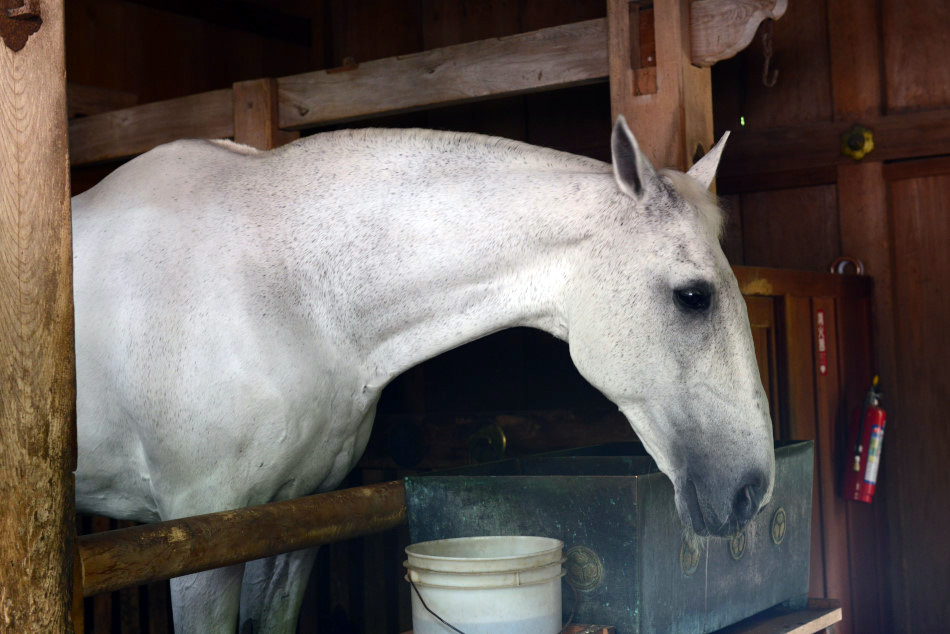 At the forecourt, the Shinkyu-Sha, the sacred horse stable, houses a real horse.  This comes from the tradition made by early emperors who would donate to the Kibune Shrine in Kyoto either a white horse to stop the rain in a rainy year, or a black horse to welcome the rain in a dry year.

The front facade of the Shinkyu-Sha, the sacred horse stable, featues the Sanzaru (Three Wise Monkeys) on eight frieze panels depicting ordinary lives of people.  The most famous panel is undoubtedly the adorable “See No Evil, Speak No Evil, Hear No Evil”.

Beyond a large tori and a flight of steps is the Yomeimon Gate (陽明門), the gate of setting sunlight.

With 500 beautiful wooden carvings, the Yomeimon Gate (陽明門) is considered by many the most impressive gate in Japan.

The impressive Yomeimon Gate represents the Main Gate of the Imperial Court in the entire complex.

As far as the legend goes, Yomeimon Gate is also called the “Gate of the Setting Sun” because visitor can gaze upon it all day without getting tired.

Impressive decorations at the gate includes a golden lion housed in a niche. 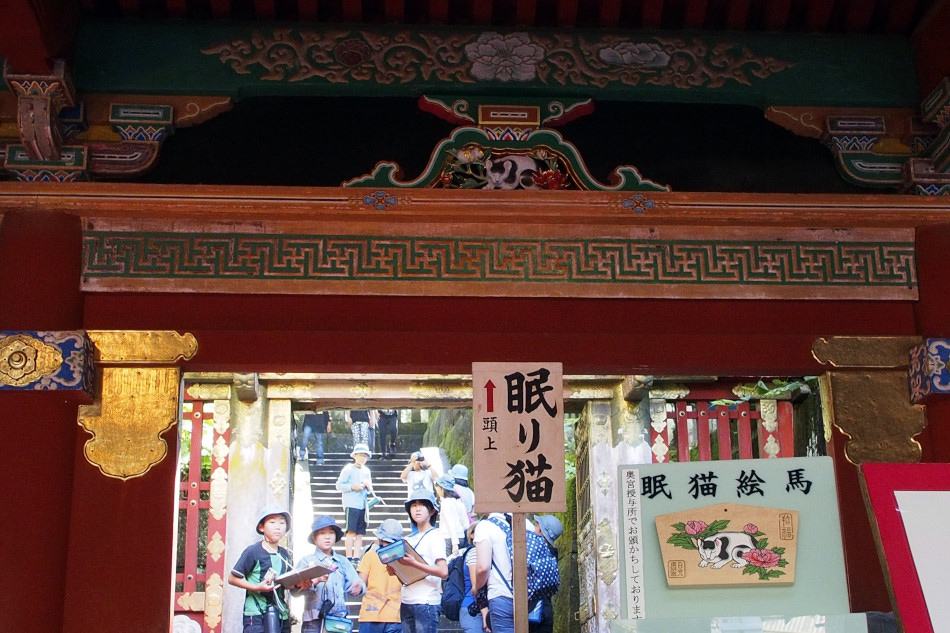 Another famous feature at Toshogu is Nemurineko, the tiny carving of the sleeping cat on the beam of a hallway.  A work by master carver Hidari Jingorou, the napping cat under the warm sun is a depiction “Nikko”, which literally means “sunlight”.  It marks the entry point of the path that ultimately leads to the final resting place of Tokugawa Iayasu (徳川家康) on the hill.

Taking the earliest direct train from Tokyo and came to Toshogu immediately upon arrival, we thought we could enjoy a bit of peaceful time at the highly popular shrine before the tourist groups came.  That totally didn’t happen as the shrine was already full of student groups when we arrived.  Walking up to visit the mausoleum of Tokugawa Iayasu (徳川家康) was not a peaceful journey at all.

Just a few minutes of short walk led us to the hill platform of the mausoleum.  Compared to the shrine buildings downhill, the mausoleum carries a more harmonic relationship with the natural surroundings.

The bronze urn on the hill contains the remains of Tokugawa Iayasu (徳川家康), the most powerful shogun of Japan before the modern era. 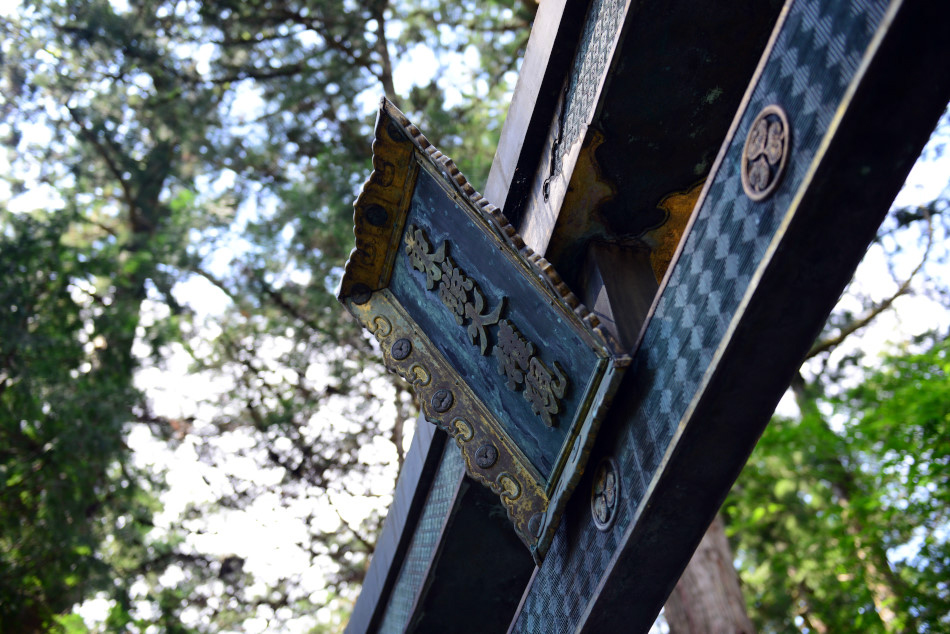 The curved archway of Karamon Gate (唐門) symbolizes the authority of the Gohonsha Main Shrine Hall behind.  Despite the renovation scaffolding, we were able to enter the hall as a group to have a peek of the space where events and festivals would be held annually. 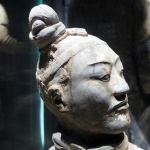 In the morning, we headed to the main railway station of Xian.  At the station’s  east plaza, there were a number of municipal buses designated for major tourist attractions near the city.  We hopped onto one of the several buses heading to the Terracotta Army (兵馬俑).  The bus ride took roughly an hour to arrive at the parking lot, which was about 15 minutes of walk from the gate of the archaeological site.  On our way to the gate, we passed by an alleyway full of vendors.  An elderly woman selling baby woolen shoes beautifully handcrafted in traditional styles caught our attention.  From the ticket hall it was another 15-minute meandering through a park until reaching the main site, where four exhibition halls housed the most important archaeological discovery in China in the 20th century.  We started from Pit 1, the biggest and most impressive exhibition hall where about 2000 terracotta warriors were on display in rows of excavated ditches.  There were over 6000 warriors in this pit alone.  It was unbelievable that no two warriors have the same face.  At Pit 3 a number of high ranked terracotta generals were unearthed, prompting archaeologists to believe that it was the vault for the commanders.  However the pit had been partially damaged.  We then moved on to Pit 2 that offer close-up encounter with different types of warriors: archers, infantry, chariots, troopers, etc.  The extraordinary details of the warrior’s hairstyles and armour were captivating, leaving us plenty of clues to piece together an impression of what being one of the thousands of warriors protecting the mighty First Qin Emperor (秦始皇)might be like 2200 years ago.  Before leaving, we dared not to miss the “Qin Shi Huang Emperor Tomb Artefact Exhibition Hall”, in which two bronze chariots and horses unearthed near the mausoleum were on display.

We have learnt about the Terracotta Army since early childhood in Hong Kong from books and school.  We had seen an amazing traveling exhibition of the warriors at London’s British Museum back in 2008, but none could compare with seeing the real excavation site of the army.  Discovered in 1974 by a well-digging farmer, the Terracotta Army belongs to the outer part of the Mausoleum of the First Qin Emperor.  Famous as a cruel tyrant, the First Qin Emperor was also widely recognized for his contributions on unifying China, not only militarily, but also the language, culture, economy and measurement units.  Built between BC 208 to 256, the mausoleum construction began in the first year of his throne when the First Qin Emperor was 13 years old.  The 8000+ terracotta warriors unearthed revealed the high level of sculpting skills and artistic craftsmanship of the Qin Dynasty, as well as the selfish personality of the First Qin Emperor.  Legend had it that the First Qin Emperor had huge fear of mortality.  Not only he sent out travelers to look for the medicine of immortality, he also commissioned a build a terracotta army to safeguard his tomb from his uncounted enemies in the Afterlife.  Ancient texts also described the exquisite construction of the mausoleum, including river streams filled with mercury so they would never dried up.  Before the actual digging of the mausoleum may take place one day in the future, our generation could only imagine the exquisite of the emperor’s underground mausoleum from ancient depictions and archaeological studies of the excavated terracotta army.

Like many railway stations in the country, Xian Railway Station is a huge building.

The old woman making traditional woolen shoes near the parking lot of the Terracotta Army. 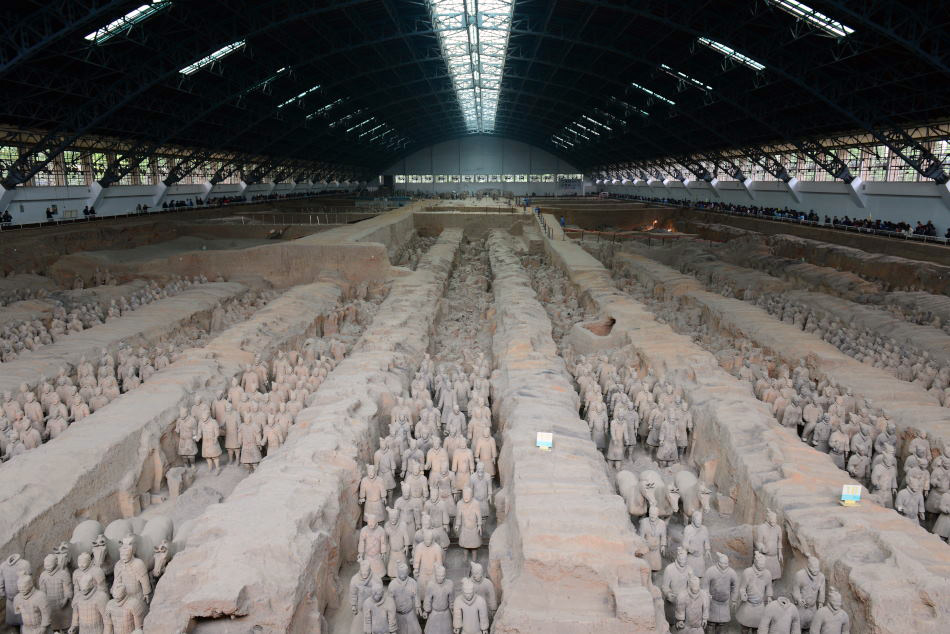 Aisles of the Terracotta Army in Pit One.

No visitors were allowed to go down to the aisles, except archaeologists and occasional VIP.

Looking at the warriors, it was hard to imagine all of them were once fully coloured.

Built in 1976, the huge building covering Pit One felt like a railway station.

The terracotta warriors seemed like they were queuing for a train, but in fact, the warriors were facing eastwards and battle-ready to guard the Emperor’s tomb from enemies of the east, namely the six nations that Qin had conquered before unifying China into a single nation.

A number of the terracotta warriors were in different stages of conservation.

Terracotta warriors and horses at Pit 2. 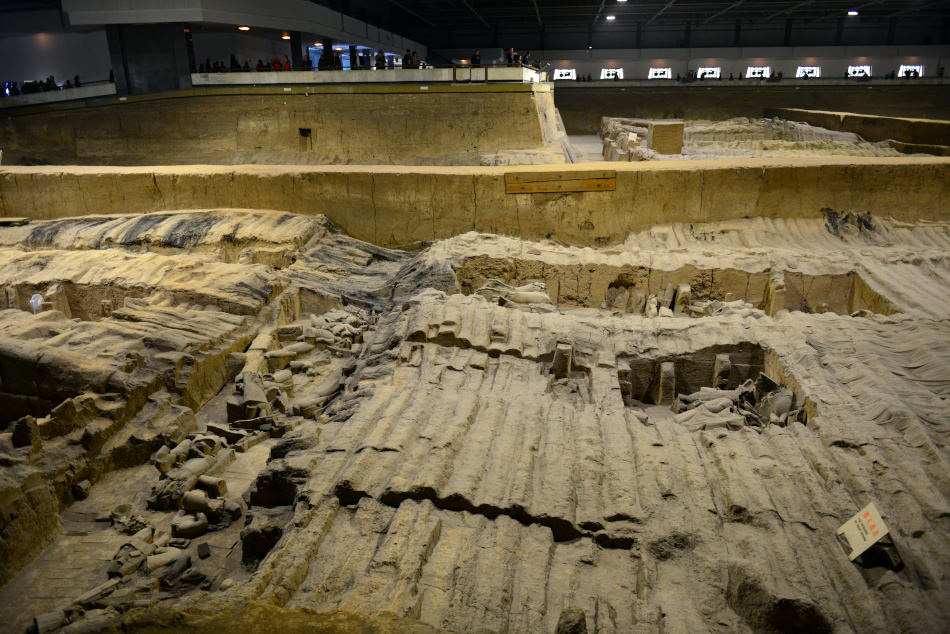 Scattered pieces of warriors and artefacts at Pit 2.

Photographs of the coloured warriors during excavation.

Several terracotta warriors were displayed in glass boxes at Pit 3. 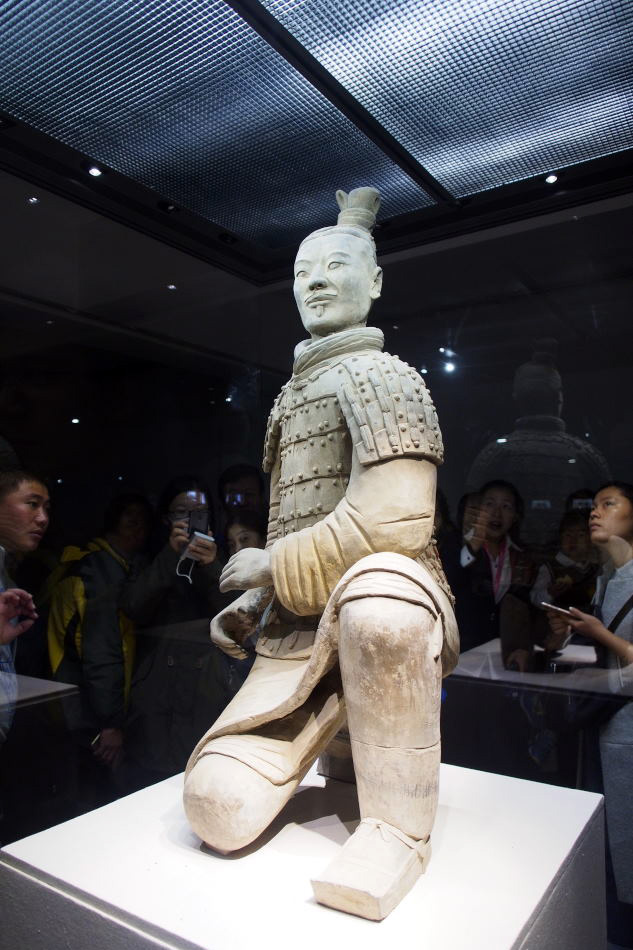 All of them had different hairstyles, dresses, postures, and faces.

Belly of the high ranked official.

Archer without the bow.  Some of the weaponry were also on display.

Cavalry and his beautifully carved horse.

The details of the horse’s headpiece was magnificent.

Closeup of a warrior’s head showing unique hairstyle of that time.

Two bronze chariots were discovered near the mausoleum.  They are roughly half the size of the real objects.  The chariots were unearthed in 1980 and took archaeologists years to put back together the broken pieces.  These chariots are one of the fifty or so designated artefacts that can never leave the country.