In late 2021, the box office success of biography movie Anita in Hong Kong has triggered the city’s renewal interest on the pop songs and films of Anita Mui (梅艷芳), the late local pop icon from 1980’s. One of her most well known films is Rouge (胭脂扣) in 1988. Adapted from a novel, Rouge is about the story of Fleur (played by Anita), the ghost of a 1930’s prostitute who wanders in the 1980’s Hong Kong searching for the ghost of her former lover, whom she has committed suicide together. Much of the movie was filmed in Shek Tong Tsui (石塘咀), the city’s most vibrant and glamorous red light and entertainment district between 1904 and 1935. Dressed in a 1930’s qipao dress, Fleur lingers on Shek Tong Tsui’s Hill Road and expresses frustration for the completely transformed urban scenery of the 80’s. She can hardly recognize anything in the tranquil residential neighbourhood with her 1930’s memories, from a period that many still consider to be the golden age of Shek Tong Tsui. It was the time when Shek Tong Tsui was home to dozens of large brothels (four-storey establishments each employing about 60 prostitutes) and hundreds of smaller ones, 40 high end restaurants and numerous hotels and theatres, employing more than one tenth of the city’s population (about 50,000 people in a population of less than half a million). It was the flourishing moment when wealthy merchants from all over East and Southeast Asia would come for entertainment. Wild tales of super-rich merchants contesting for their favorite top tier prostitute by competing in burning cash as fuel to make Chinese dessert from midnight till dawn, or of rich man tipping each staff in a large brothel with gold coins after marrying a popular prostitute, simply make the short-lived golden age of Shek Tong Tsui as legendary as one could imagine. It was the time when Shek Tong Tsui was a stage to showcase luxury and glamour.

The red light district of Shek Tong Tsui began in 1904, when the government relocated all Chinese brothels from Sheung Wan to this relatively undeveloped area, after the bubonic plague and a big fire devastated the densely populated Tai Ping Shan neighbourhood. Hong Kong’s history of prostitution can be traced back as far as 1840’s. Some accounts estimate that in 1844 about 10% of Chinese businesses in the Victoria City (Central and Sheung Wan) were brothels. A 1876 census indicated that out of 25,000 Chinese women in the city, more than 80% were prostitutes. This was largely due to the fact that most Chinese in 19th century Hong Kong were predominately male migrant workers from Imperial China, coming to earn a living or escape from political turmoil. This social structure was also reflected in the sex imbalance of the Chinese population during that time: from 75.4% male & 24.6% female in 1851, to 62.3% male & 37.7% female in 1901. As Hong Kong emerged as a prosperous trading hub in late 19th century, the city also became a hub for prostitution serving clients of all classes, from wealthy merchants in the region to hardworking laborers at the cargo piers.

200 years prior to the arrival of the British, Shek Tong Tsui was a hilly area at the west of Hong Kong Island. Due to its large deposit of granite stone, Hakka Chinese came to establish quarries, leaving behind many stone ponds or “shek tong” (石塘) after decades of extractions. Before land reclamation, there was a narrow peninsula sticking out the sea that resembled a beak or “tsui” (咀). Thus the area was named Shek Tong Tsui (石塘咀). In 1904, land reclamation of the area was just completed, leaving a large piece of new land awaiting for opportunities. The government’s answer was the new red light district. The red light district entered its golden age in 1920’s, when the prostitution industry emerged as a strong economic driving force for large restaurant complexes, entertainment establishments, hotels, public tramway, hair salons, theatres (most prostitutes were big fans of Chinese operas), and even department stores. In fact, prostitutes from high end brothels were some of the biggest followers of fashion trends (Shanghai and abroad) at that time. They represented a large group of cliente for department stores, shopping everything from imported clothing and silk stockings to jewellery and cosmetic products. Many high status prostitutes also led glamorous lives, and some even became celebrities due to media coverage. After celebrated prostitute Fa Ying Hen (花影恨) committed suicide at the age of 23, her death was widely reported on newspapers and over a thousand people attended her memorial service. Ten years after her death, a movie was made about her life and went on to become a box office hit in 1940.

The vibrant Shek Tong Tsui red light district came to an abrupt end in 1935, when prostitution was abolished by the government in line with Britain. Today, no trace of the red light district remains in the area. It only exists in historical accounts and photos, and in films like Rouge. Hill Road (山道), a major thoroughfare that bisects the former red light district (from Po Tuck Street down to the waterfront), has become a tranquil hillside street dotted with lovely cafes and eateries, revealing nothing about its ostentatious past. Snaking overhead in dramatic fashion, the Hill Road Flyover has become an icon of modern Shek Tong Tsui, connecting Hong Kong University up the hill and the tram depot down near the Harbour. 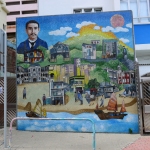 Dr. Sun Yat-sen (孫中山), Father of Modern China, delivered a public speech at Hong Kong University in 1923. Began with a rhetorical question “Where and how did I get my revolutionary and modern ideas?” Sun’s answer was Hong Kong, the British colony where he came 30 years prior at the age of 17 and stayed for 9 years as a high school and medical student. During his time in the city, Sun was impressed by the architecture, urban order and public safety of Hong Kong, and the efficiency of the government. Whereas just 50 miles away in Heungshan (now Zhongshan), Sun’s home village in Qing China, government officials were highly corrupted and incompetent. His experience and knowledge obtained in Hong Kong had inspired Sun’s ideas of the Xinhai Revolution (辛亥革命) and strengthened his will to establish a modern China.

Sun Yat-sen spent most of his time in the core area of Victoria City, now the area of Central-Sheung Wan. In 1996, the Hong Kong Government began to promote a tourist route called Dr. Sun Yat-sen Historical Trail (孫中山史跡徑) to commemorate the famous visitor. 16 spots related to Sun were identified along the 2-hour historical walk in the Central-Western District. Nine local artists were commissioned to design unique plaques that can be seen as urban artworks. These spots include the locations where Sun attended schools, places he lived, venues he met with his political partners, and sites where his organizations engaged in revolutionary activities. In 2006, the Edwardian Classical Kom Tong Hall in the Mid-Levels was converted into Sun Yat-sen Museum. Not only does the museum provides another focal point in the city to learn about Sun’s story, it also offers the perfect reason to preserve the 1914 building. Kom Tong Hall was the former mansion of businessman Ho Kom-tong (何甘棠), the younger brother of Robert Ho Tung (何東), the richest man in Hong Kong at the turning of the century. Listed as a declared monument, Kom Tong Hall (甘棠第) was one of the first buildings in Hong Kong to use reinforced concrete structure and fitted with concealed electrical wiring. The historical architecture itself is well worth a visit. The story of Sun Yat-sen remind us that Hong Kong, as a melting pot between East and West, and the old and new, has been a source of inspirations and a window to the outside world for the Chinese community in the modern era.