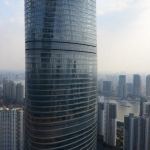 East of Huangpu River across from the historic city centre of the Bund, Pudong (literally means the east bank of Huangpu) has been Shanghai’s new ground for contemporary developments in recent two decades, including the city’s international airport Pudong International Airport (opened in 1999) and Shanghai’s financial district Lujiazui.  Many of Shanghai’s iconic skyscrapers from the past two decades, which include Oriental Pearl Tower, Jin Mao Building, Shanghai World Financial Center, Shanghai IFC, and the tallest of them all – Shanghai Tower, stand proudly at Lujiazui, directly across Huangpu River from the Bund, its historic predecessor.  One tower after another tested the vertical limit of modern architecture.  The development of Lujiazui reflects the ambition and pace of the contemporary development of the Chinese society.

Before heading to the airport, we dropped by Lujiazui of Pudong District one last time.  At Lujiazui, we intended to visit the Aurora Art Museum, a gallery designed by Japanese architect Tadao Ando.  Unfortunately not until we reached the door, we realized that the museum was closed on Monday.  We ended up spending time wandering around the financial area to check out the latest skyscrapers.  The main focus in the area was undoubtedly Shanghai Tower (上海中心大厦).  Construction was completed but Shanghai Tower had not opened its doors to the public yet.  We could only walk around the 632m tower, the tallest in China, from outside.  While admiring the twisting gesture and double skin facade system of Shanghai Tower, we could not ignore the two other super highrise towers of Lujiazui: Jin Mao Tower (金茂大廈) and Shanghai World Financial Center (上海環球金融中心).  Before leaving Lujiazui for the airport, we had a quick tea break at a chain restaurant for a last taste of Shanghaiese food.  We then took the metro to Longyang Road station and switched to the maglev airport express.  Reaching a speed of about 430km/h, the magnetic levitation train ride to the airport took less than ten minutes.  Our 4-day experience was coming to an end as we sped through the suburbs of Shanghai before our evening flight back to Hong Kong. 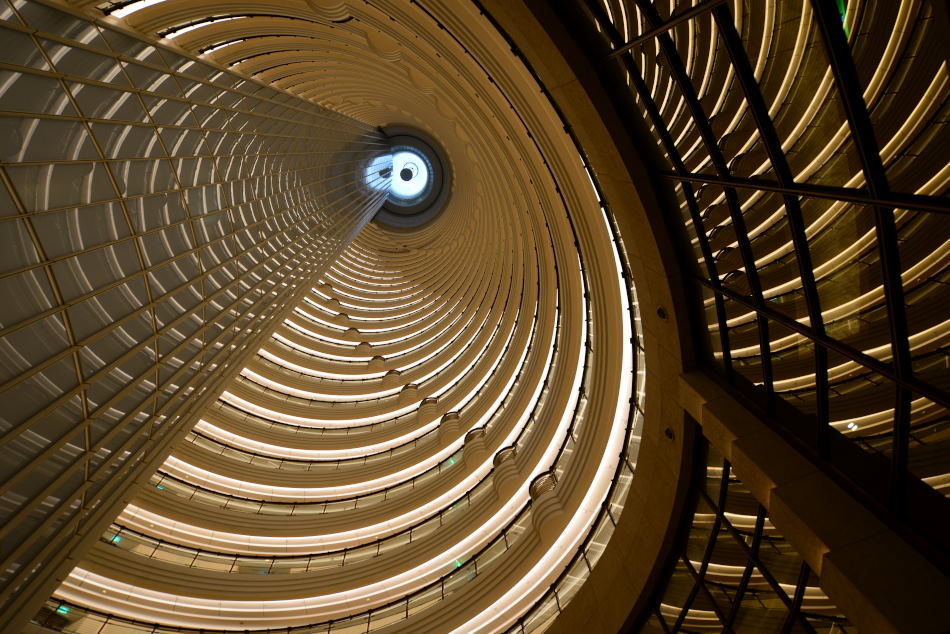 The central atrium of Grand Hyatt Hotel at the 54th floor of Jin Mao Tower.

View of Putong and the Bund from the 54th floor of Jin Mao Tower. 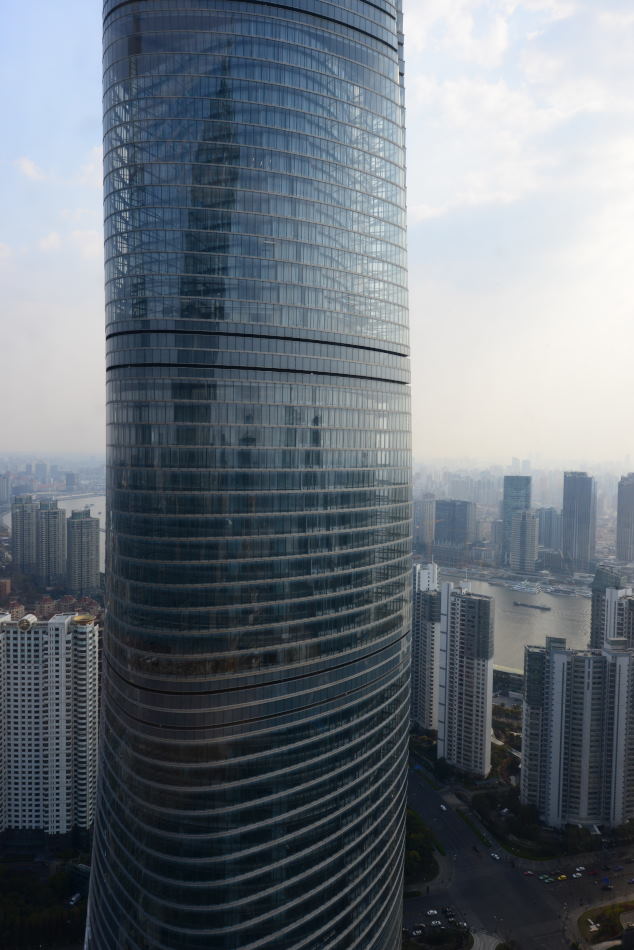 The three super tall skyscrapers of Shanghai are all designed by American architects: Shanghai World Financial Tower by KPF, Jin Mao Tower by SOM, and Shanghai Tower by Gensler. 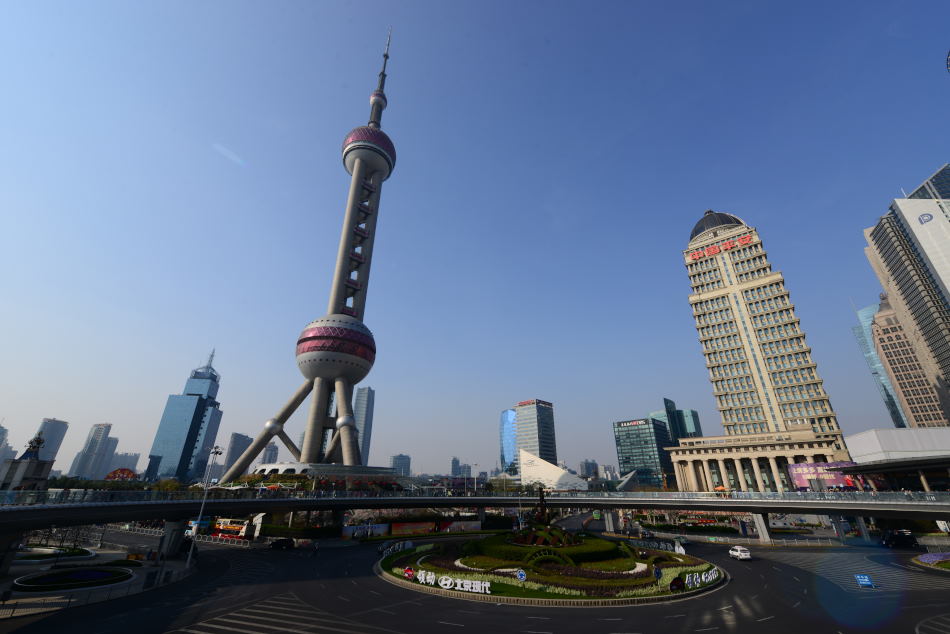 The twin towers of Shanghai IFC with the Shanghai Tower in the middle. 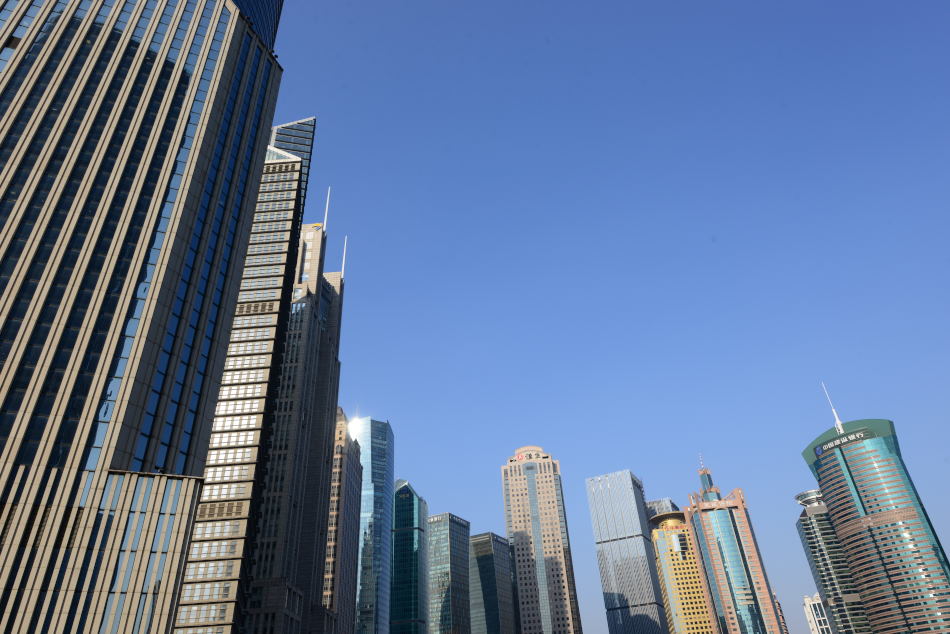 The rest of the commercial buildings at Lujiazui were dwarfed by the three tallest towers.

Extensive footbridges connect a number of commercial developments in Lujiazui.

One last look at the three towers before we headed for the airport.