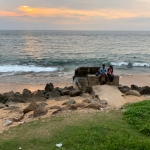 Our last train journey in Sri Lanka is one of the most popular railway routes for tourists: the Coastal Line from Galle to Colombo.  In a little less than two hours, our train moved from seaside resort towns near Galle to the old fort and metropolitan area of Colombo. Constructed in late 19th century, the Coastal Line is the second oldest railway line in Sri Lanka.  For much of the journey the train was winding along the southwest coastline of island.  The coastal scenery reminded us of the train scene in Hayao Miyazaki’s Spirited Away, in which the protagonist Chihiro Ogino boards on a train that runs across water on submerged tracks.  The moving reflections in the water, the tranquil scenery at the far horizon, the evolving lights from late afternoon to early evening, and the melancholy yet romantic train cabin come together to become one of the most remarkable animation scenes ever made.  The train journey to Colombo might not be as romantic as Miyazaki’s scene, and the train was fully packed with standing tourists and locals and could get a bit noisy sometimes, but the late afternoon scenery of the Indian Ocean would live long in our memories.

Galle Station was first established in 1894, and has undergone an upgrade in the 20th century with a modernist concrete building.

The wooden timetable at Galle Station should be an antique that has been around for decades.

The Coastal Line runs between Matara and Colombo Fort via Galle.

Taking a train in Sri Lanka is always a delightful activity and a great way to interact with the friendly locals. 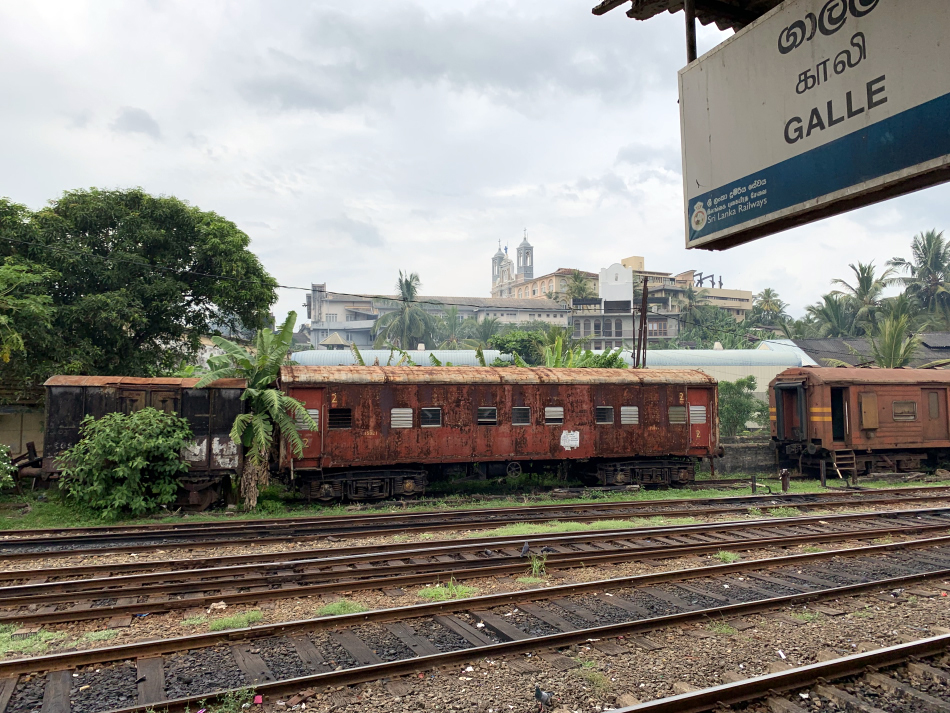 Leaving Galle signified our Sri Lankan journey was coming to an end.  After dinner in Colombo, we would go immediately to the airport near Negombo for our midnight flight.

For the entire journey I was sitting at the opened door between two passenger train cars. 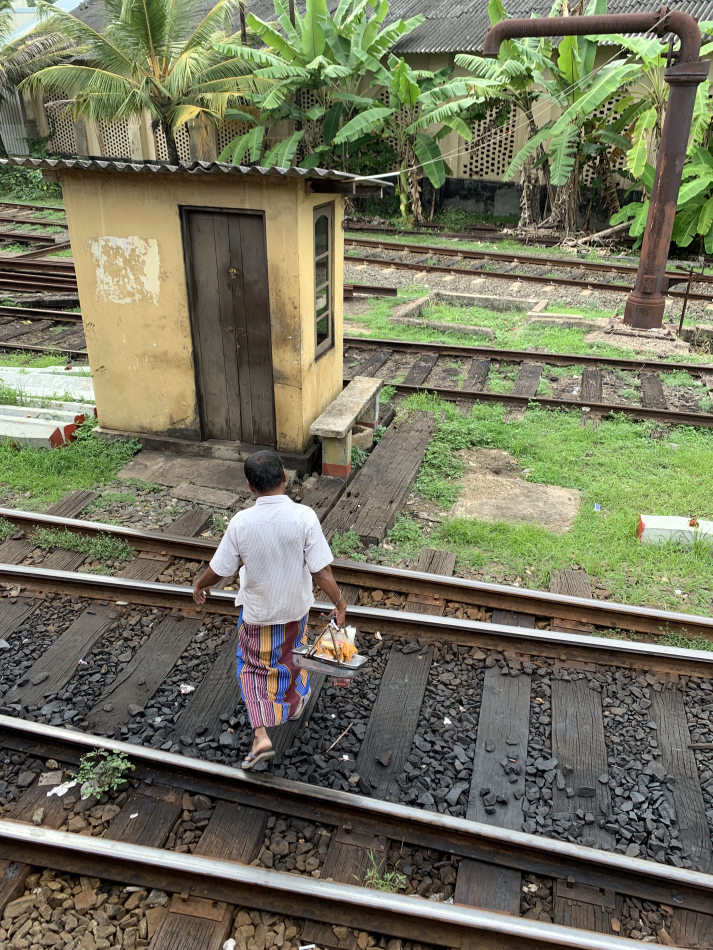 As the snack vendor left the train, it was time for departure.

For the first half of the journey, the train ran along a waterfront road.

Sitting or standing by the doorway on a Sri Lankan train is a pleasant way to enjoy the scenery.  Despite the low speed of the train, certain level of caution should be taken when standing at the opened door.

After the halfway point, the train ran right along the coastline.

Our train passed by a number of coastal resort towns.

We also passed by a number of impoverished communities by the sea.

The train passed right in front of the houses of the seaside communities.

The southwestern coast of Sri Lanka was badly hit by the 2004 Indian Ocean Tsunami.  Many lives were lost and some communities have never fully recovered.

The Coastal Line was severely hit by the 2004 tsunami.  Known as the 2004 Sri Lanka tsunami-rail disaster, a Matara Express train was running from Colombo to Galle before getting hit by the tsunami at the village of Peraliya.  After two rounds of waves, the village of Peraliya was completely destroyed, and about 2000 people died (including passengers of 8 train cars and villagers who climbed onto the train top to escape the waves).  Out of about 1700 train passengers, only 150 people survived.  The incident is the single worst rail disaster with the largest death toll the world has ever seen. 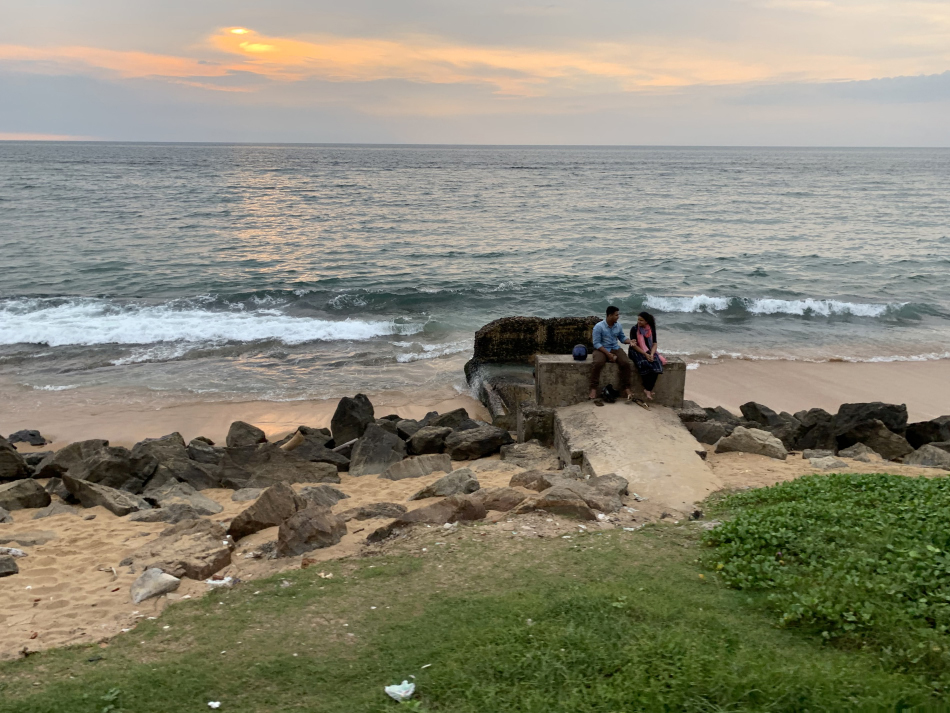 The Indian Ocean offered us the perfect setting to view the sunset.

We were getting closer to Colombo as the sun was about to set below the Indian Ocean.

After 1 hour and 45 minutes, our train was finally approaching downtown Colombo.  We were ready for the final act in Sri Lanka before flying home.

Known as Asia’s largest remaining colonial fortress and an UNESCO World Heritage site, Galle is a popular tourist destination in southwest Sri Lanka.  Galle has long been an important trading port of the island since ancient times.  Cinnamon was exported from Sri Lanka as early as 1400 BC, and Galle was likely the main port of export.  Throughout history, Galle traded with the Greeks, Romans, Persians, Chinese, Arabs, Malays, and Indians.  Sri Lanka’s colonial history began when the Portuguese arrived in the 16th century and built a fortified city in Galle.  Galle continued to serve as the main port for spices export.  In 1640, the Portuguese surrendered to the Dutch East India Company.  After the takeover, the Dutch built the fort that we saw today with bastions and a solid granite wall.  In 1796, Galle and Sri Lanka changed hands again when the island became a British Crown colony named Ceylon.  The 400-year colonial rule came to an end in 1948 when independence was granted to establish Dominion of Ceylon in the Commonwealth.  Then 28 years later in 1972, Sri Lanka finally became a republic.  From four centuries as a colonial port of export for spices and coffee (then replaced by tea) to a tourist town based on commercialization of its colonial past, Galle’s fortune has always been tied with the outside world. 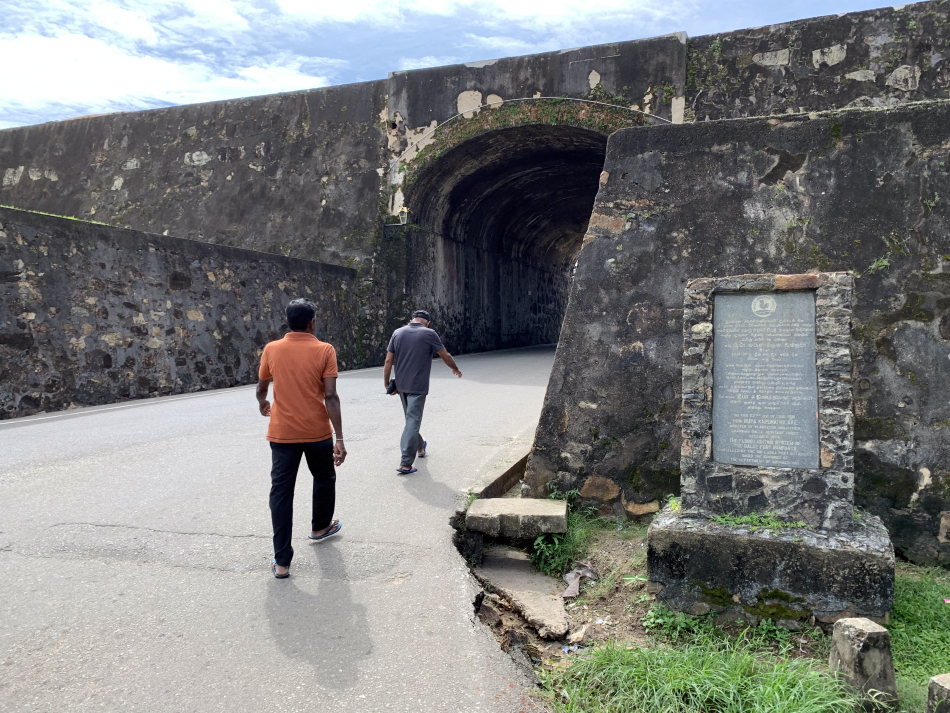 We dropped off our backpacks at the baggage storage in Galle Railway Station, then found our way into the old fortified city. 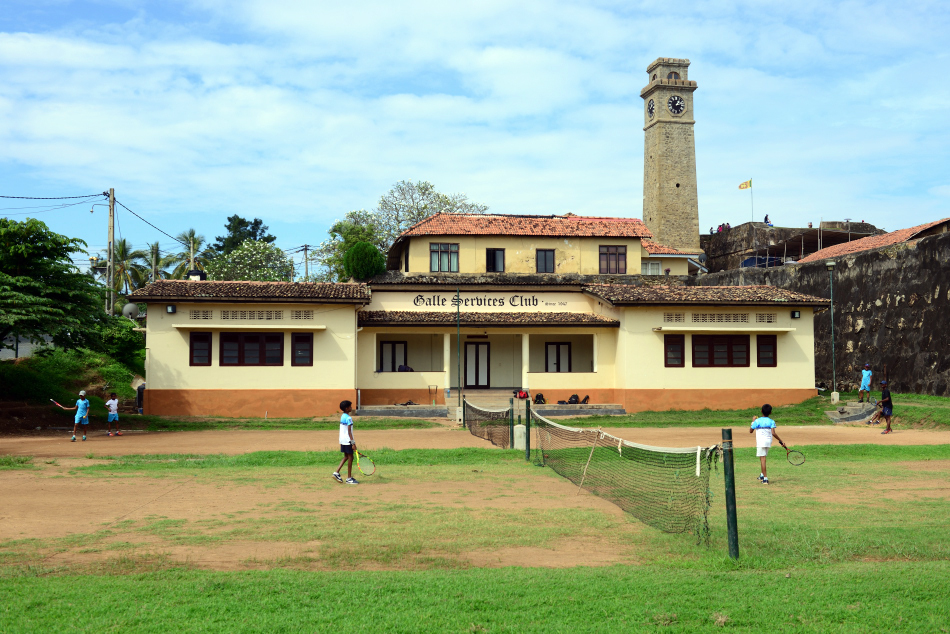 The first thing we saw inside the fortress was Galle Services Club (est. 1947) and the 1883 clock tower.

Located on the highest point in the fortress, the Dutch Reformed Church (Groote Kerk) was built by the Dutch in 1755. It was the third Dutch Reformed church in Galle and signified the rise of the Dutch after the Portuguese.

Further down the road from the Dutch Reformed Church stands All Saints’ Church, Galle’s first Anglican Church (consecrated in 1871) and a powerful statement by the British.

The former Dutch warehouse from the 17th century has become the National Maritime Archaeology Museum.

The interior of the old gate is used for motorcycle parking.

First built by the Portuguese, then renamed to Zwart Fort (Black Fort) by the Dutch.  We accessed the Black Fort via a police compound.  At Zwart Fort, a staff came out to show us around and told us about the history of the place. 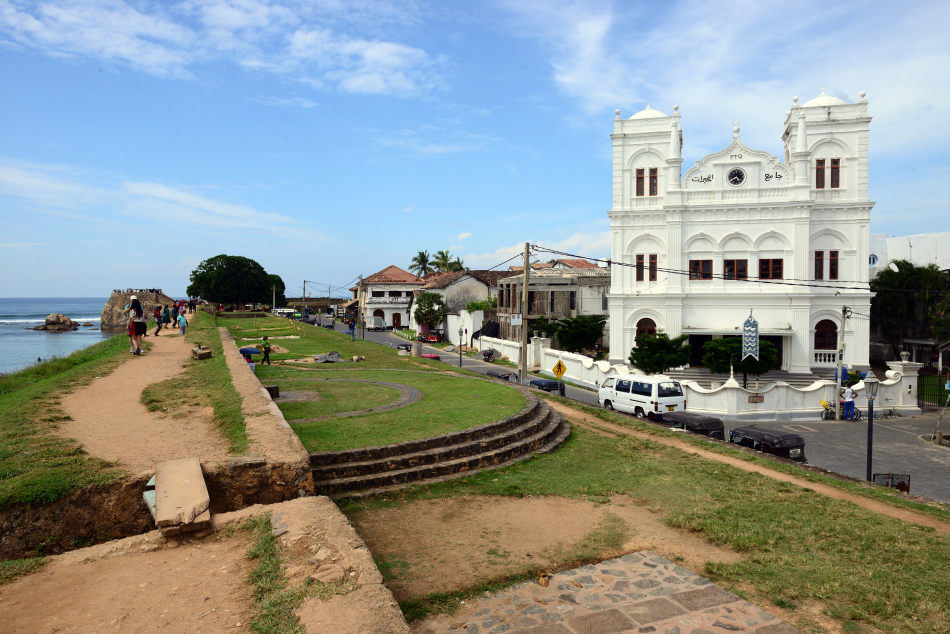 Meeran Jumma Masjid looks more like a church than a mosque, but this Islamic prayer hall has been around for 300 years already.  More than half of the population inside the fort are Moor.  They are believed to be descendants of the Arab traders who settled in Sri Lanka at around the 9th century.

Galle Fort is built on a rock peninsula and there are a few small beaches near the lighthouse.

The Galle Lighthouse is the oldest light station in the nation. The original was built by the British in 1848 but was destroyed by fire in 1936. The current 26.5m tall lighthouse was constructed in 1939. 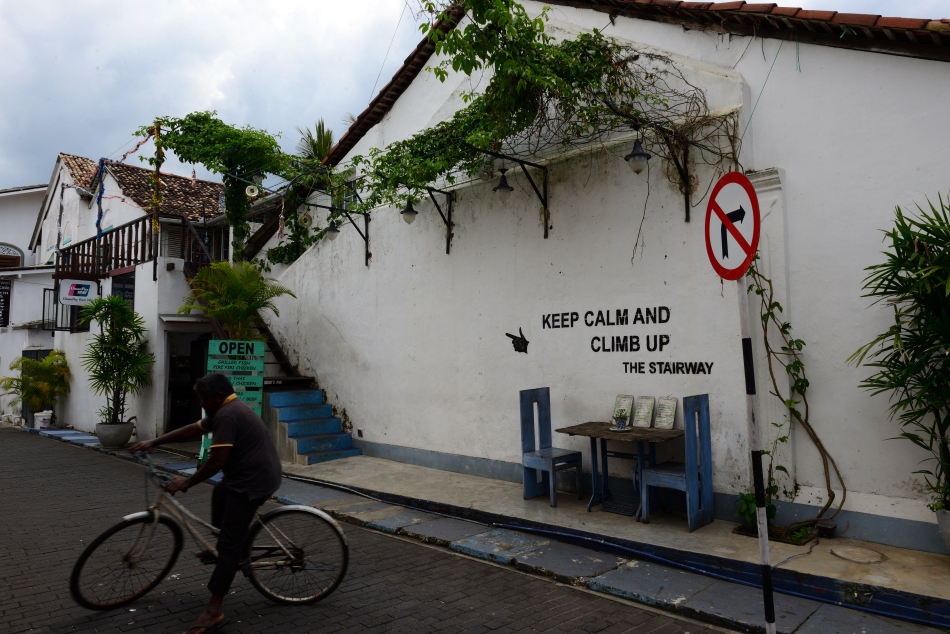 Strolling or cycling aimlessly within Galle Fort is a nice way to explore the town.

In Galle Fort, Dairy King icecream has been recommended by a number of guidebooks and blogs.

Dairy King is a great place to take a short break during a visit to Galle Fort. 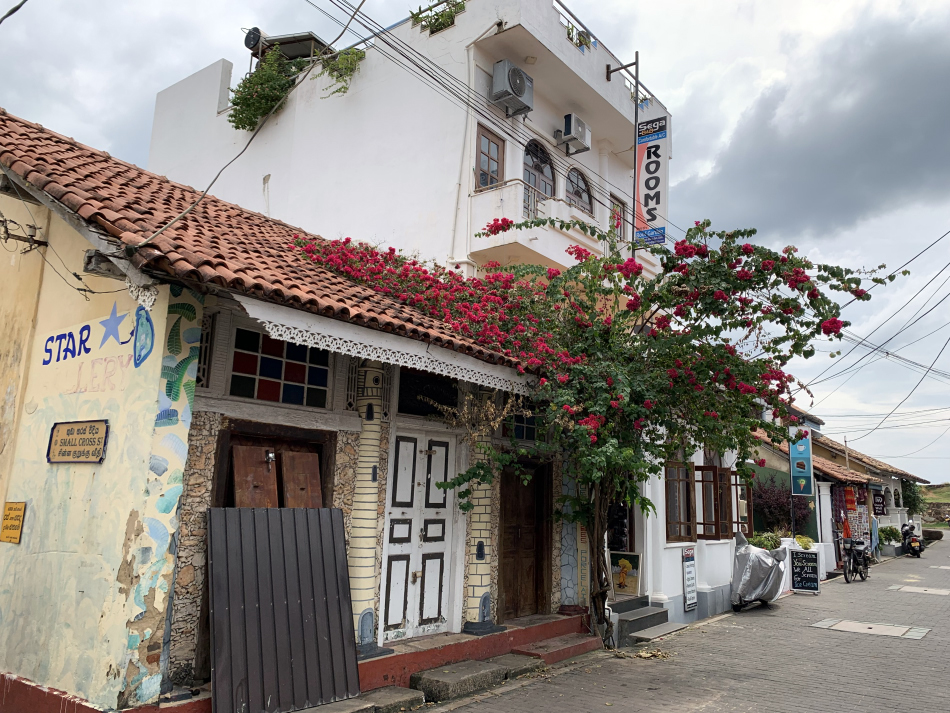 Many houses in Galle Fort have been converted into guesthouses, restaurants, or shops catered for tourists.

The ambience of the colonial times is the top selling point for the tourist industry in Galle.

Some old mansions are transformed into high end retail shops for fabrics, furniture, housewares, and other design items with a twist of Sri Lankan style.

Established in 1892, Al Bahajathul Ibraheemiyyah Arabic College is one of the oldest Islamic Arabic institutions in Sri Lanka.

On our way out of the fort, we passed by Sri Sudharmalaya Buddhist Temple, a Buddhist temple with a unique appearance.  The temple dated back to 1889.  The belfry of the building suggests that temple might be converted from an earlier church.

Our most recent travels have been focused on short trips to Japan and South Asia.  These experiences offered us two distinct views of Asia.  In Japan, the minimalist beauty in fashion, food, and architecture, the strong sense of community and respect to local traditions in villages and urban centres, and the Shinto attitude on harmonic coexistence with the nature captivated our admiration.  On the other hand, the pungent spices, mystic incenses, vivid costumes, bizarre rituals, exquisite temples, majestic landscapes, and mythical folklore of Tibet, India and Myanmar offered us some of the last glimpses of truly unique and centuries-long traditions in our ever-changing world.  After an invigorating journey to Hokkaido in early summer, we turned our eyes to the exotic dimensions of South Asia once again.  We picked the “tear drop” in the Indian Ocean, Sri Lanka, as our destination for a 12-day trip.

2019 marked the 10th anniversary of the end of the Sri Lankan Civil War, a devastating conflict between the Sri Lankan military and the rebel force of Liberation Tigers of Tamil Eelam (LTTE) or simply known as the Tamil Tigers.  The conflict lasted for 26 years.  15 years have also passed since the horrific 2004 Indian Ocean Tsunami, the natural catastrophe that has devastated the coastal area of Sri Lanka and claimed 35,000+ lives.  In the past 10 years, tourism has boomed exponentially along with the rapid growing economy.  2019 was on track to become another record breaking year for tourist numbers until Easter Day, when Isis terrorists attacked hotels, churches and residences in Colombo, Negombo and Batticaloa, claiming 259 innocent lives.  The incident caused a disastrous blow to the country’s tourism.  The government immediately tightened national security, attempting to restore international confidence.  Despite of the attack, magazines and newspapers remained affirmative to endorse Sri Lanka as a top destination of 2019.  After learning about its diverse attractions, affordability, ease of travel and communication, pristine natural scenery and unique cultural experiences, we were not surprise at all to see why Lonely Planet selected Sri Lanka as their destination of 2019.

As a small country about half the size of England, Sri Lanka has a lot to offer.  We planned for a loop journey starting in Negombo on the western coast, then moved north to the UNESCO World Heritage sites of Anuradhapura, Polonnaruwa, Sigiriya & Dambulla before heading up to the hill region.  In the hills, we stopped by the historical capital Kandy, took the “world’s most scenic train ride” to the tea plantations near Ella and Haputale.  Leaving behind the hills of Ceylon tea, we ventured into the wilderness of Udawalawa for wildlife safari, and arrived at the beaches of Mirissa and the colonial port of Galle to embrace the Indian Ocean.  Before leaving Sri Lanka, we stopped by Colombo for a delicious crab dinner.  This trip was filled with lovely moments: joining Buddhist pilgrims at the 2300-year-old Bodhi Tree, hiking through Sir Thomas Lipton’s tea terraces, facing eyes-in-eye with elephants and leopard on safari jeep, spotting whales and dolphins in the open ocean, candlelight dining on the Mirissa Beach, not to mention devouring delicious curry and seafood, meeting the friendly and curious local people, and taking in the laid back atmosphere that we could always smell in the air.

Our journey embarked from the beaches of Negombo. 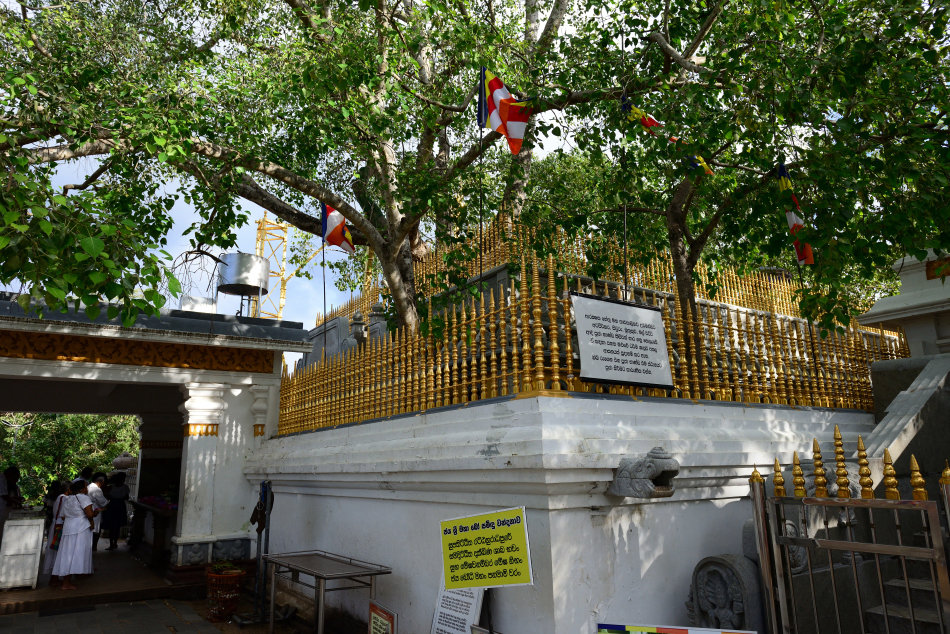 At Anuradhapura, we circled the 2300-year sacred Bodhi tree,

At Sigiriya, we climbed up a rock opposite to Sigiriya Rock to watch the best ever sunset.

Visiting the Temple of the Tooth in Kandy offered us a chance to see the century-old rituals that once symbolized the political and religious power of the nation.

At Kandy, we stayed at the magnificent Villa Rosa Guesthouse overlooking the Mahaweli River,

and visited the famous Royal Botanical Garden to check out the large flying foxes. 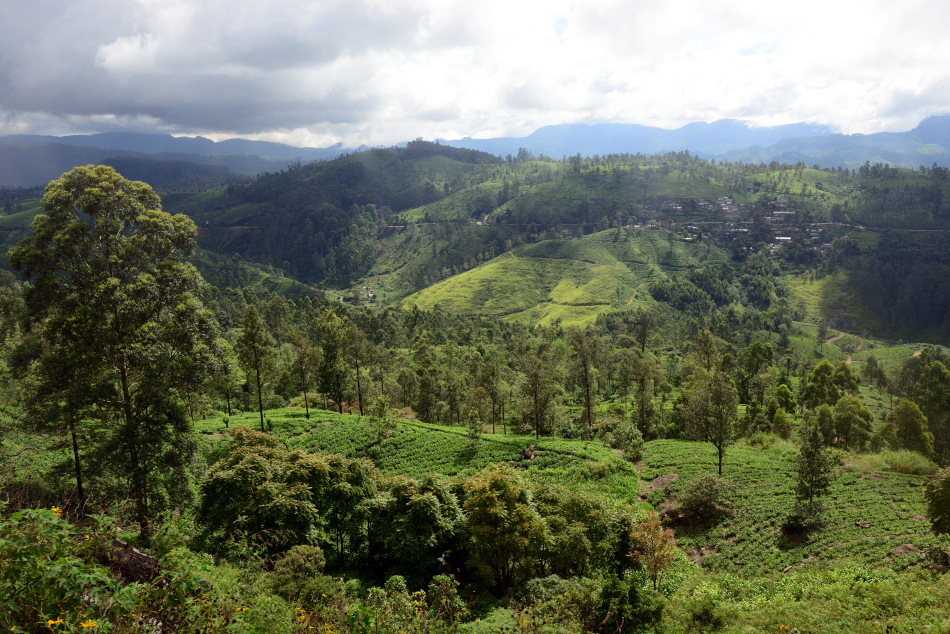 “The world’s most scenic train ride” took us up to the hills of tea plantations. 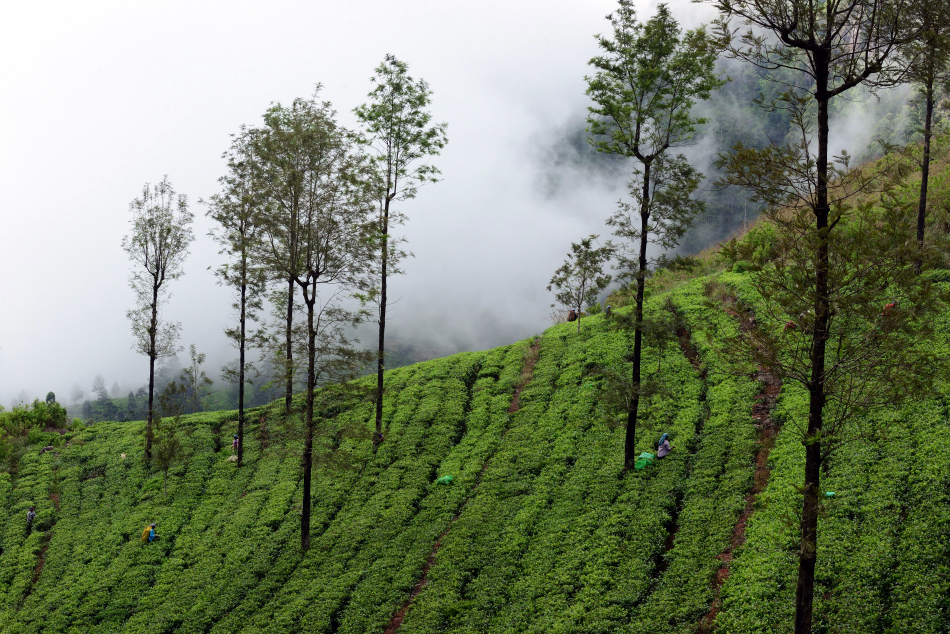 In Haputale, we followed Lipton’s footsteps for a half day hike.

In Ella, we were rewarded with the peaceful and lush green scenery.

Onwards to Udawalawa where we had close encounters with Asian elephants.

Reaching the south coast at Mirissa signified the final leg of our journey.

Mirissa offered us moments of relaxation right by the Indian Ocean.

The seaside resort town is also renowned as one of the world’s top spot for whale and dolphin watching.

We enjoyed every moments by the sea at Mirissa and Galle before heading north to Colombo.