During our Hokkaido trip, it was hard not to get up early when sunrise happened daily at around 3:30am.  An early start to the day allowed us to enjoy the refreshing beauty of Hokkaido’s volcanic landscape under the morning mist.  To enjoy the most of Lake Akan before leaving, we took a morning walk before breakfast.  By the lake, we passed by the  pier where staff were preparing passenger boats for the first tourist cruises of the day.  Behind the pier a small trail led us into a forest towards the famous hot mud pools known as bokke.

In front of our hotel, Lake Akan was blanketed with mist in early morning.

At the tourist pier, staff were preparing the passenger boats for the first cruises of the day.

Behind the pier, a small path led us into the lakeside forest.

The path ended at a series of hot mud pools known as bokke (bubbling mud).  The area around the bokke remains relatively warm and snow-free in winter, when the rest of Akan is covered in a metre of deep snow.

Occasionally, we saw people standing in the icy water of Lake Akan.

We soon realised the people in the water were actually fly fishing.  We later found out that Lake Akan is the most popular venue in Japan for fly fishing.

A recreational fisherman approached us and spoke to us in Cantonese.  It was his 18th consecutive year making fishing trips to Lake Akan.  We followed him to a narrow path beyond the tourist trail. 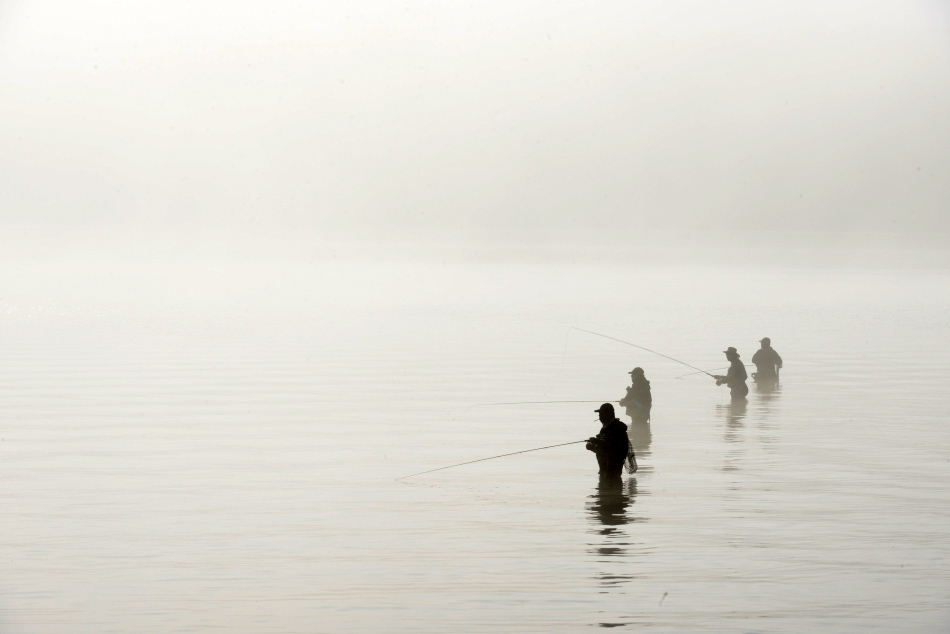 Further into the path, we could see dozens other fishermen in the lake. 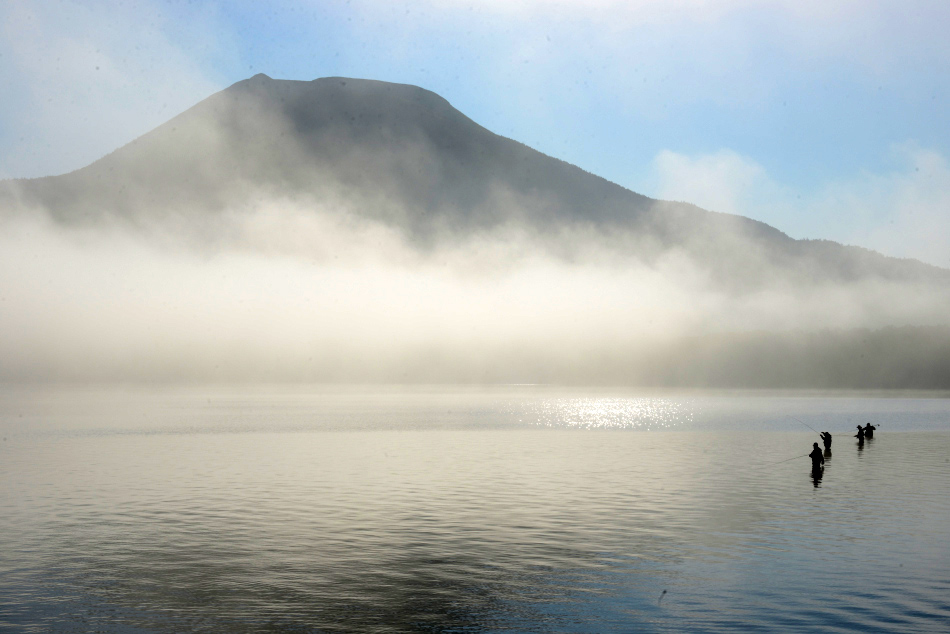 As well as the majestic Mount Oakan (雄阿寒岳) at the back. 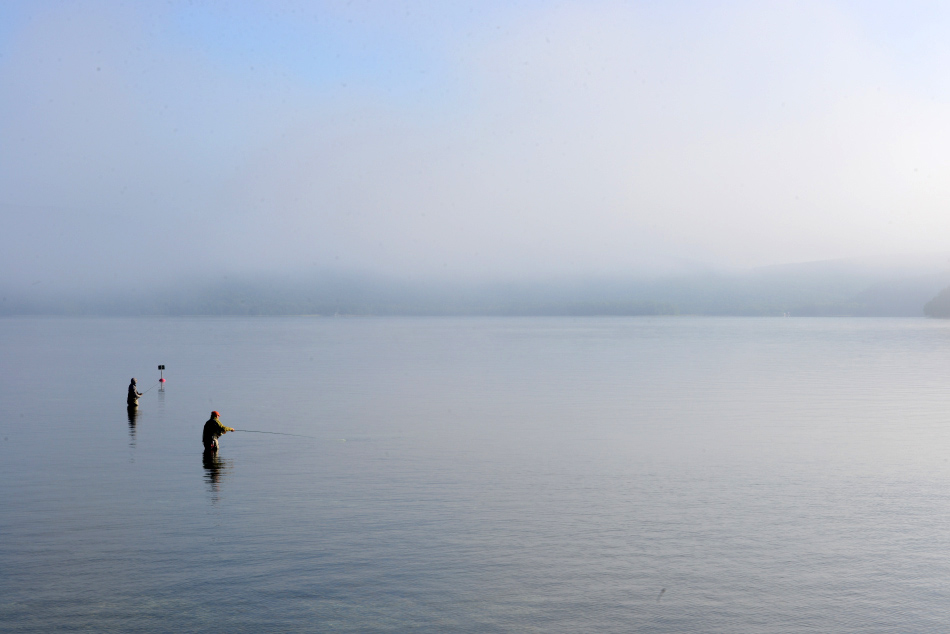 Standing in the water of Lake Akan and fishing in front of the volcano must be a fantastic experience.

At this hidden location beyond the tourist trail, we could enjoy the perfect volcano view along with the fishermen. 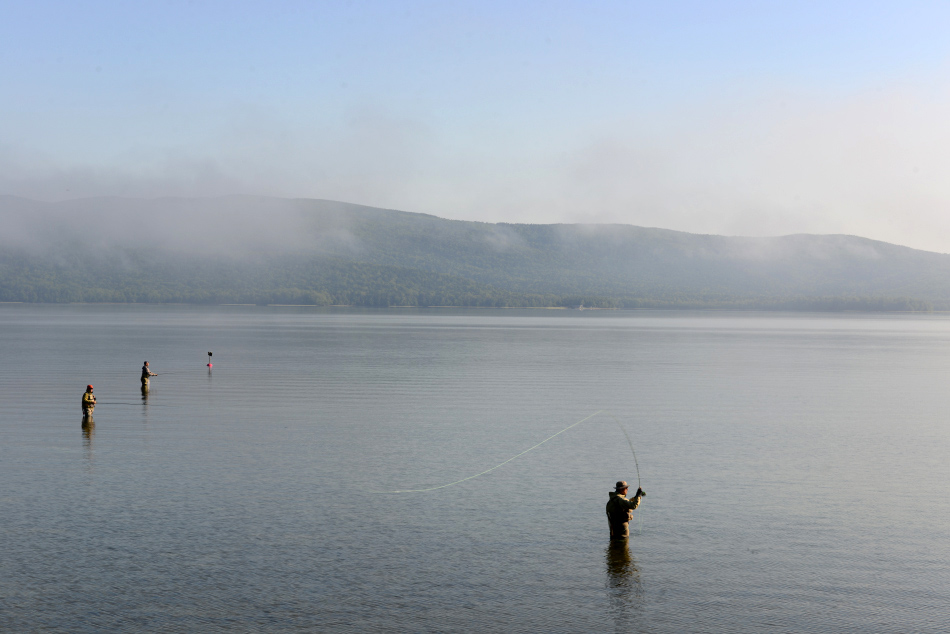 As the sun rose, the mist began to retreat. 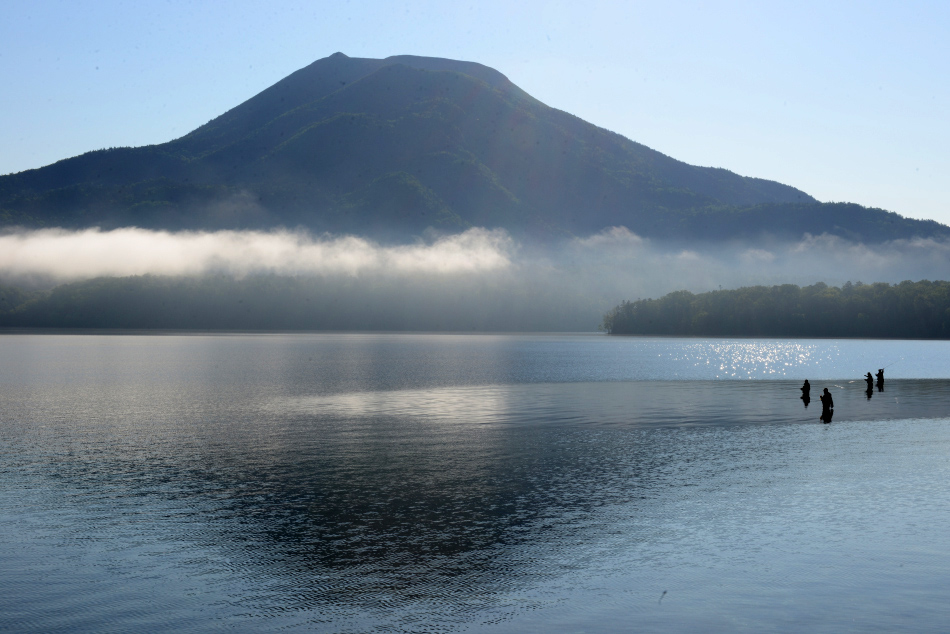 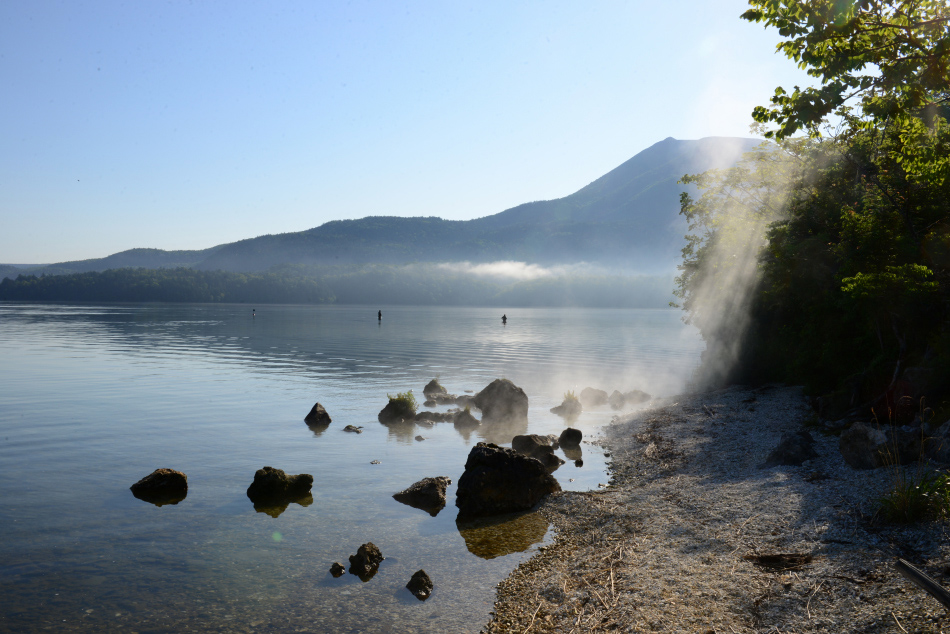 Along the lake, there were a number of hotspring where boiling water came out from the ground and flowed into the lake.

On our way back to the hotel, we passed by a number of hotspring streams.

The hotspring footbath (弁慶の足湯) at the trailhead attracted hikers to rest their feet after their walks.

Ten to fifteen minutes on the road took us to Lake Onnetoh, a small lake where Mount Meakan (雌阿寒岳) and Akan Fuji stood along with their perfect reflection.

We hiked up a nearby hill to enjoy the scenery of Lake Onnetoh and the two stratovolcanoes.

After Lake Onnetoh, our journey in Eastern Hokkaido had come to an end.  We were ready to move on to Central Hokkaido.

At 869m above sea level, Sunset Peak (大東山) on Lantau Island (大嶼山) is the third tallest mountain in Hong Kong.  Situated east of Lantau Peak (鳳凰山, 2nd tallest), and west of Lin Fa Shan (蓮花山, 6th tallest) and Yi Tung Shan (二東山, 7th tallest), Sunset Peak is at the centre of the mountainous area on the island.  Sunset Peak is very popular with hikers in the autumn, when much of the mountain would be covered with golden miscanthus, or silver grass.  Other than the golden grass, the mysterious stone cabins dated to the 1920’s near the summit area between Yi Tung shan and Sunset Peak also draw the attention of visitors.  Probably built by foreign missionary in Southern China who came to Lantau for the annual summer retreat, the two dozen or so stone cabins known as Lantau Mountain Camp (爛頭營) reveal the once thriving retreat community on the remote mountain on Lantau.

There are numerous ways to hike up Sunset Peak.  We chose to begin our walk from Nam Shan (南山) Campsite near Mui Wo (梅窩).  The trail gradually went upwards with uneven stone steps.

The miscanthus, or silver grass (芒草), started to dominate the landscape at half way up the mountain.  Soon we were embraced by fog.  The higher we went, the foggier it became. 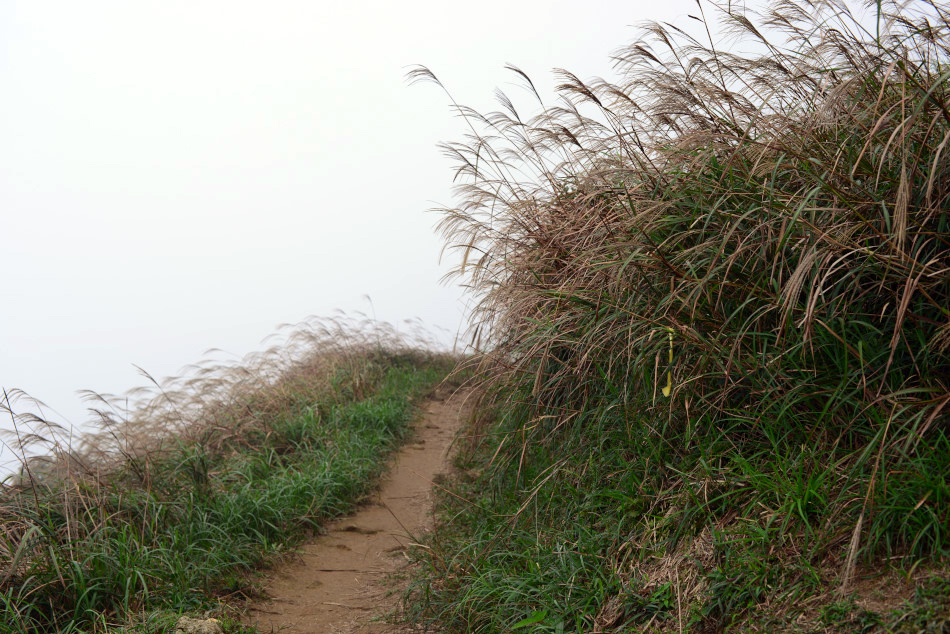 It became quite wet and misty as we approached Yi Tung Shan (二東山). 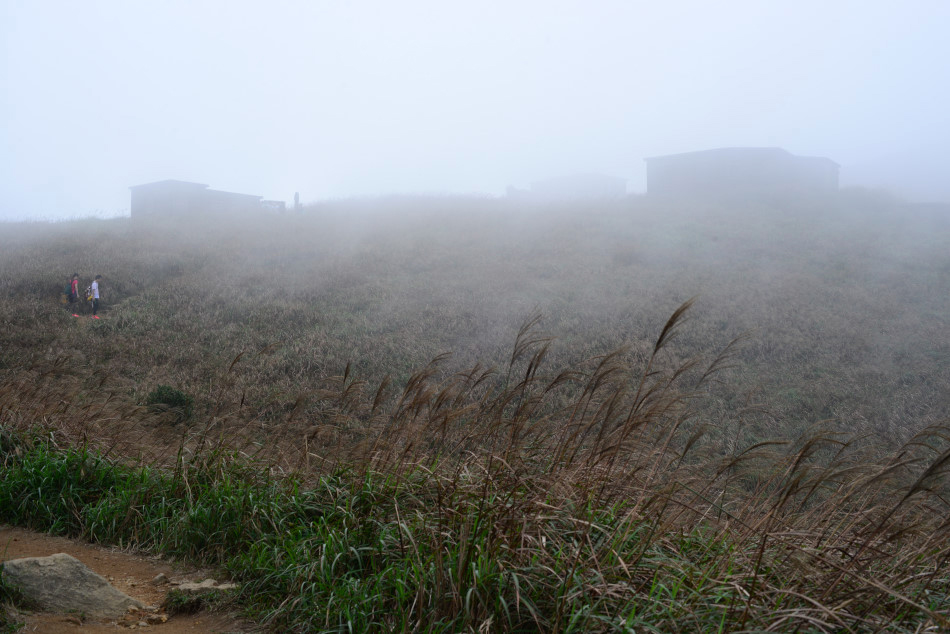 On the route from Yi Tung Shan (二東山) to Sunset Peak (大東山), the stone cabins known as Lantau Mountain Camp (爛頭營) emerged from the fog.  In the fog, it was difficult to tell how many stone cabins were actually there.

Silver grass (芒草) was so dense in the summit area.  We followed some of the narrow paths in the sea of grass to reach a few of the stone cabins.

Some said the stone cabins were summer retreat camps of foreigners who lived in Southern China.  Originally built in 1925, the cabins were damaged during the Second War World and were subsequently repaired after the war.

After the war, the stone cabins were managed by missionary organizations and the Lantau Mountain Camp Resident’s Associations.  These historical cabins are now under a new threat from the overwhelming numbers of visitors and campers who would climb on the roof for photos or leave behind piles of rubbish.

On Sunset Peak, third tallest mountain in Hong Kong, there were no golden sunset as the name suggested.  Instead, it was a unique imagery of autumn fog, silver grass and historical stone cabins.

Surrounded by the taller-than-human silver grass (芒草), it was easy to lose one’s bearings and walk in circles.

Time was getting late.  We decided to move on the trail downhill towards Pak Kung Au (伯公坳), the mountain pass between Lantau Peak and Sunset Peak.

From then on it was all uneven steps downwards.

It was a tiring descend until our legs started to shake a bit from time to time.

The sky was dark and we could briefly see the coastline of Cheung Sha Beach. 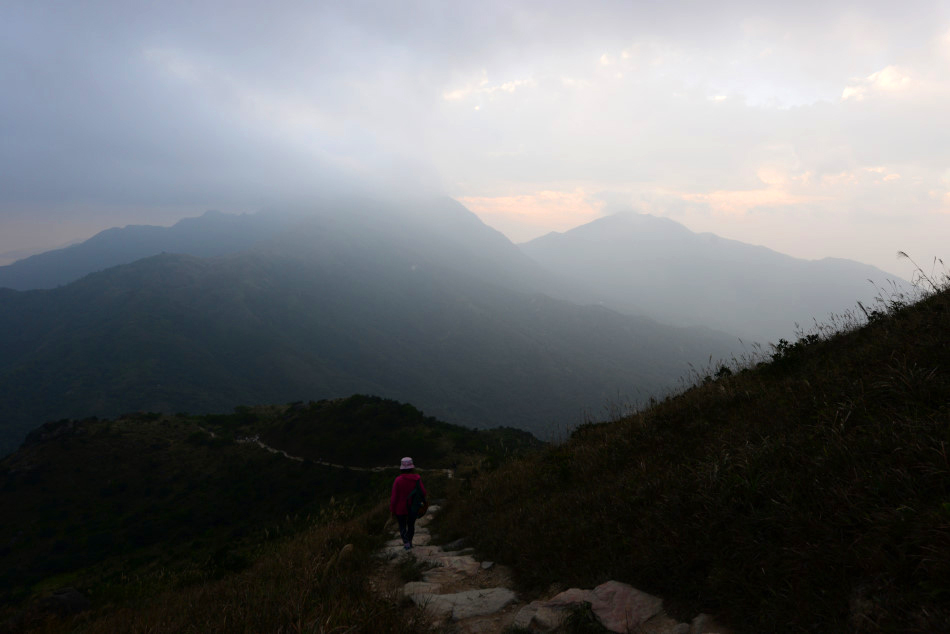 The downhill walk was dominated by the view of Lantau Peak (鳳凰山) to the west.

A little sun break as we went for the final descend to Pak Kung Au (伯公坳).

Despite the sun break, the summit of Lantau Peak was still concealed in thick clouds.

Bidding farewell to the Sunset Peak, we passed by the last patch of silver grass (芒草) near Pak Kung Au (伯公坳).  At Pak Kung Au, it wasn’t easy to get on a bus as most were already full.  After a few packed one, we managed to hop on a bus heading to Tung Chung (東涌).