For thousands of years since Neolithic times, the “L” shaped hill known as the Citadel of Amman has been inhabited.  Ruined temples, churches and palaces dated from the Roman, Byzantine and Umayyad period stand on the citadel hill today.  Most of the site remains unexcavated, despite archaeologists have been working here since 1920.  The most impressive remain on the hill is the ruins of Temple of Hercules, a Islamic palace and a modest archaeological museum, in which parts of the Dead Sea Scrolls are on display.  After dropping off our dirty clothes at a laundry shop, getting ourselves some stamps at the post office, and having a peek at the 2nd century Roman Theatre through the metal gate, we turned to the Citadel hill.  On the hill, we chatted with a group of cheerful girls who were playing on the street.  They spotted us from afar and seemed pretty curious about the three of us.  One of them spoke to us in simple English, and we ended up taking pictures with them in the midst of innocent laughter.

In the evening, we had dinner at a restaurant with a large balcony overlooking a busy street.  After dinner, I had a short break at the hostel before returning to the restaurant that we had supper to watch the 2006 UEFA Champions League final on their live TV.  There were 15 local men in the tiny restaurant watching the game.  I sat down at an empty chair behind a man and ordered a bottle of coke.  The large balcony window was opened and I could hear the noise and cheer from restaurants and tea shops down below.  It felt like everyone in the city was watching the game.  Almost all the other men in the restaurant were smoking cigarette or shisha (water pipe), and the place got pretty smoky.  When Campbell scored the first goal for Arsenal, the restaurant owner came out and teased all of us.  He yelled at me saying “Barca finishes, Arsenal good!”  Throughout the game, the men around me kept on sneaking out to the balcony and yelled down to people on the street.  I wasn’t sure whether they knew each other or they were just too excited about the game.  Assisted by Henrik Larsson, at around 76th minutes Samuel Eto finally scored the first goal for Barca, and then the second came 5 minutes later through Juliano Belletti.  It was the perfect night for the Barca supporters in Amman.  As I walked back to the hotel, I passed by groups after groups of joyful locals coming out from tea shops and restaurants after watching the game.  Some were walking home in laughter, while the others hopping on cars that packed both sides of the street.

The first impression of Jordan was clean and pleasant.

Amman is a popular Arab city for international visitors.  It also receives the most medical tourists in the region.

Locals that we met in Jordan were all very welcoming and friendly. 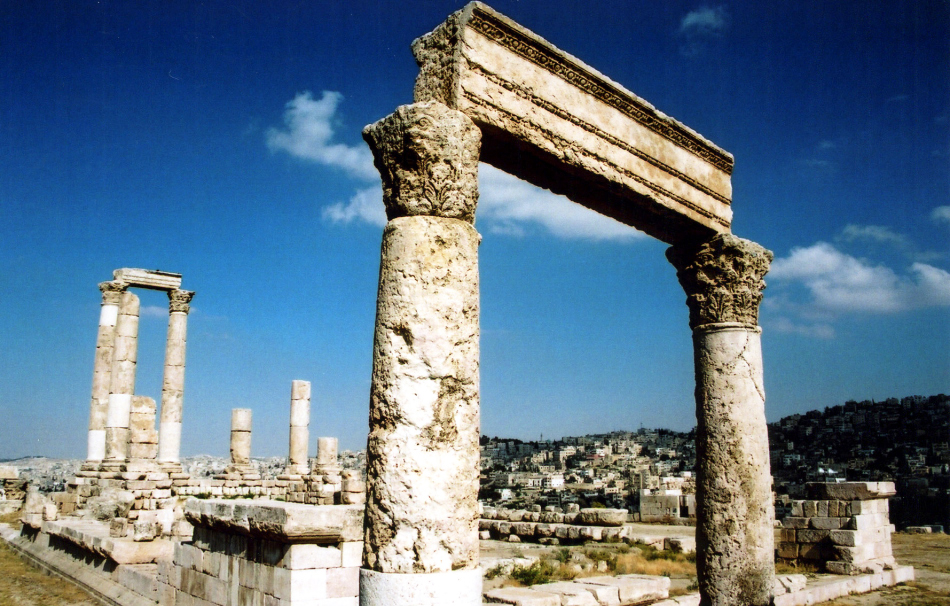 At the Citadel, the uncompleted 2nd century Temple of Hercules was the most prominent Roman structure.  Probably destroyed by earthquakes, it once housed a 12m stone statue of Hercules. 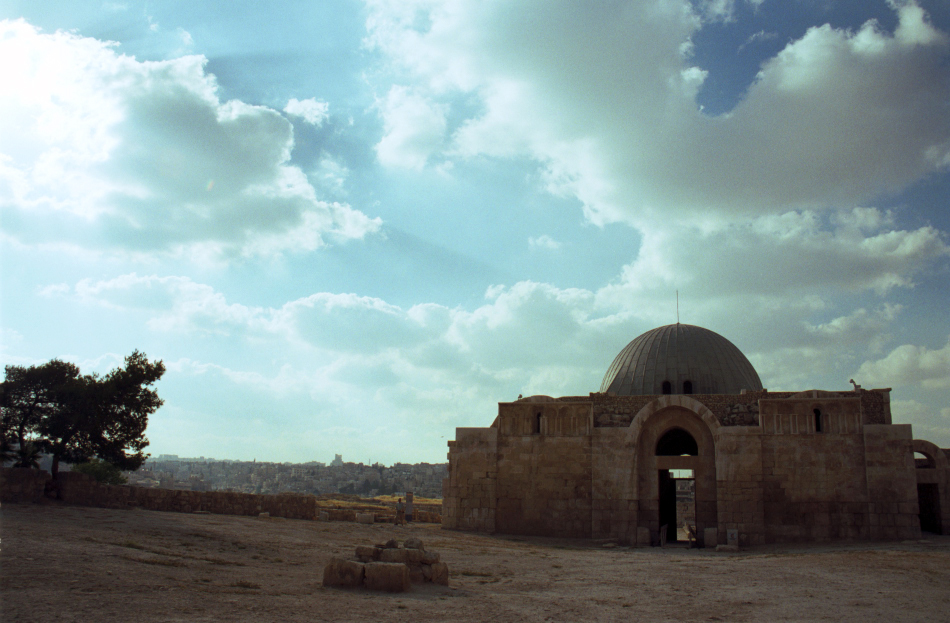 Lying mostly in ruins at the Citadel, the Umayyad Palace was built in the 8th century.

A new dome was restored at the entrance hall of Umayyad Palace in 1998, though not all experts have agreed on whether there was truly a dome in the old times.

Looking down from the Citadel we could get a good view of the Roman Theatre.

Situated at the foot of Jabal Al-Joufah opposite to the Citadel, The 2nd century Roman theatre could seat 6000 people.

The Raghadan Flagpole was once the tallest in the world. It is visible from allover the capital city.

Mainly cladded with limestone or sandstone, residential buildings in Amman are limited to 4 storeys above ground.

At the Citadel hill, we stumbled upon a group of cheerful children.

The young girls were quite curious about us. 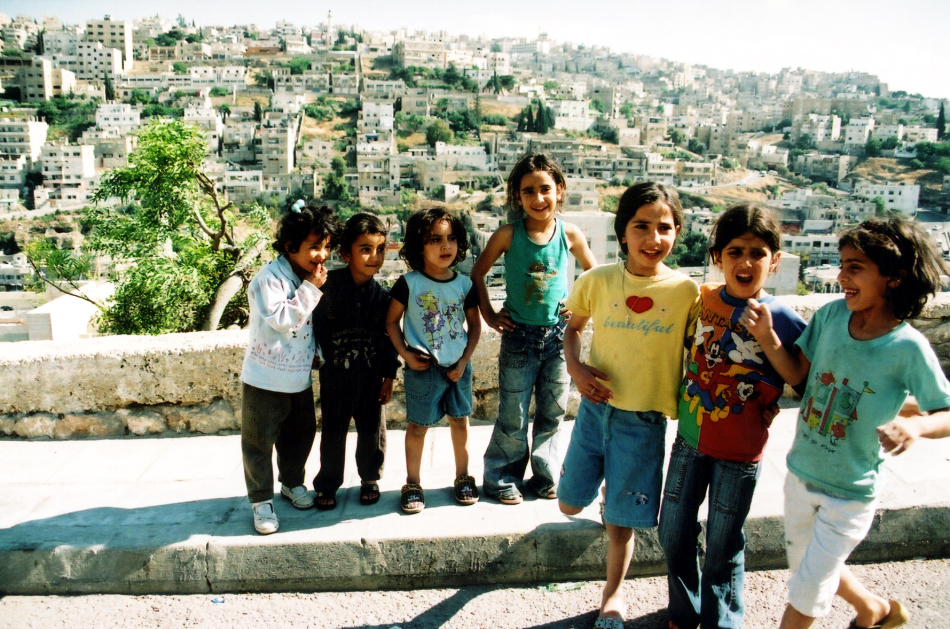 Amman is considered to be one of the most liberal cities in the Arab world.  Many children have been exposed to the global commercialism since very young age.

One of the girls tried speaking to us in simple English. 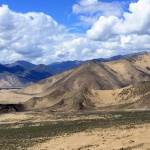 We get up at around 7am and got ourselves ready for the departure of our journey out of Lhasa.  Leaving Trichang Labrang Hotel behind, we put on our backpacks and walked out to the community medical centre on Jiangsu Road to wait for our driver.  We got the name and license plate from Pazu.  At slightly after 8am, our driver Sangzhu (桑珠) arrived and we were all set to embark on our 6-day journey.  Shannan (山南), or Lhoka (ལྷོ་ཁ།) in Tibetan, was the first destination.  Bounded by Lhasa (拉薩 ལྷ་ས་) to the north, Nyingchi (林芝 ཉིང་ཁྲི་ས།) to the east, Shigatse (日喀則 གཞིས་ཀ་རྩེ་གྲོང) to the west and the international border of India and Bhutan to the south, Shannan is considered as the legendary birthplace of the Tibetan people.  The landscape of Shannan is dominated by the middle and lower sections of the Yarlung Valley and Tibet’s most important waterbody Yarlung Tsangpo River (雅魯藏布江), as we had seen it from the sky upon our arrival at Gonggar Airport by plane.

Under the morning sun, the highland barley fields and distant mountains signified we had entered the southern countryside of Lhasa.

On Provincial Highway 101, we stopped by a lookout by the Yarlung Tsangpo River (雅魯藏布江). 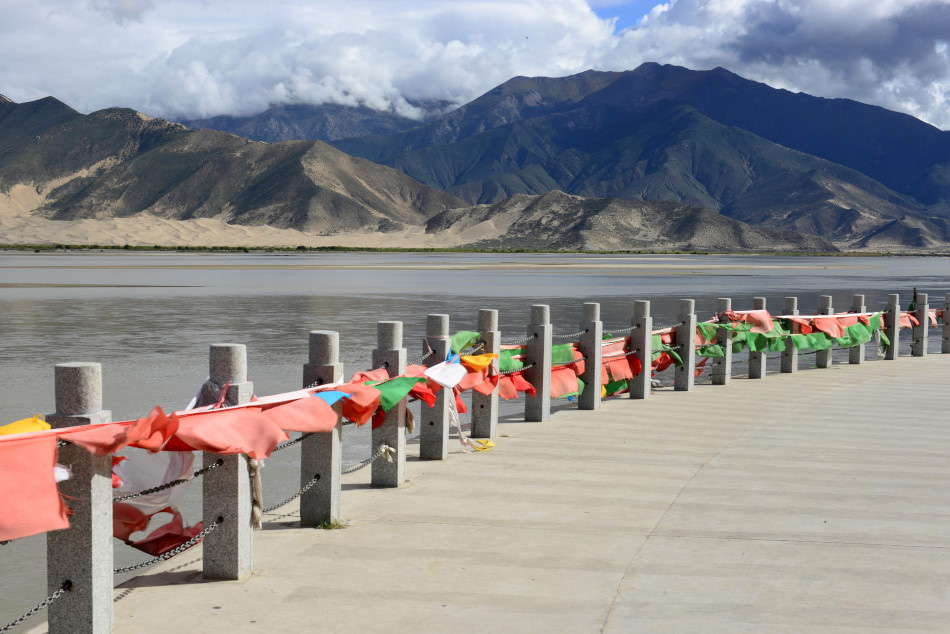 We continued to drive along the south side of Yarlung Tsangpo River until reaching Tsetang (澤當), the capital of Shannan region and the fourth largest city in Tibet.  Sangzhu stopped the vehicle at the regional security office to register our travel plan. 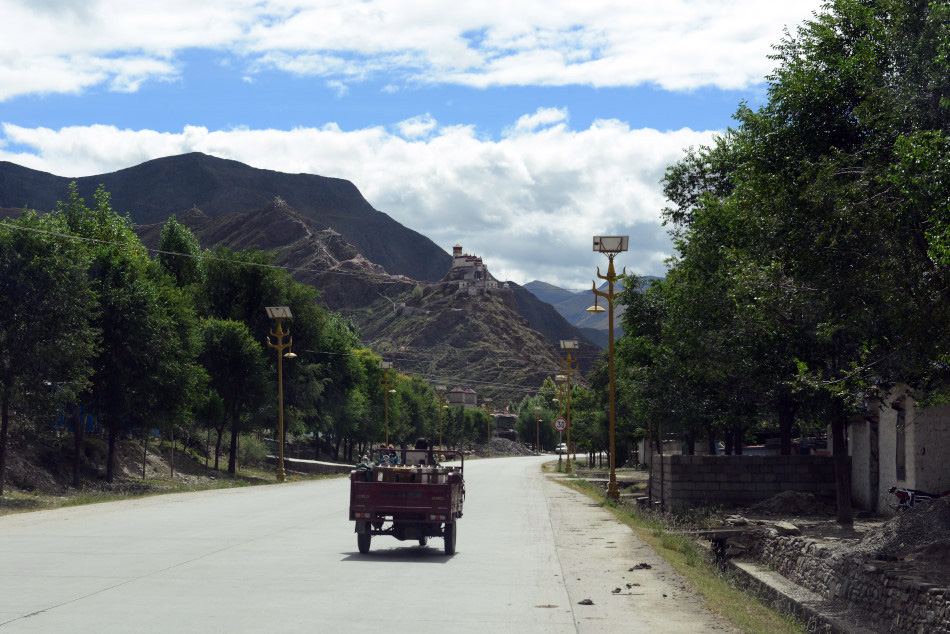 Near Tsetang (澤當), Sangzhu drove us to the nearby Yungbulakang Palace (雍布拉康 ཡུམ་བུ་བླ་སྒང།) to check out the supposedly the oldest structure in Tibet, and the legendary palace of Nyatri Tsenpo, the first king of Tibet in the second century BC.  Later in the 7th century AD, it became the summer palace of Songtsen Gampo and Wencheng Princess, and turned into a Gelug monastery in the 17th century. 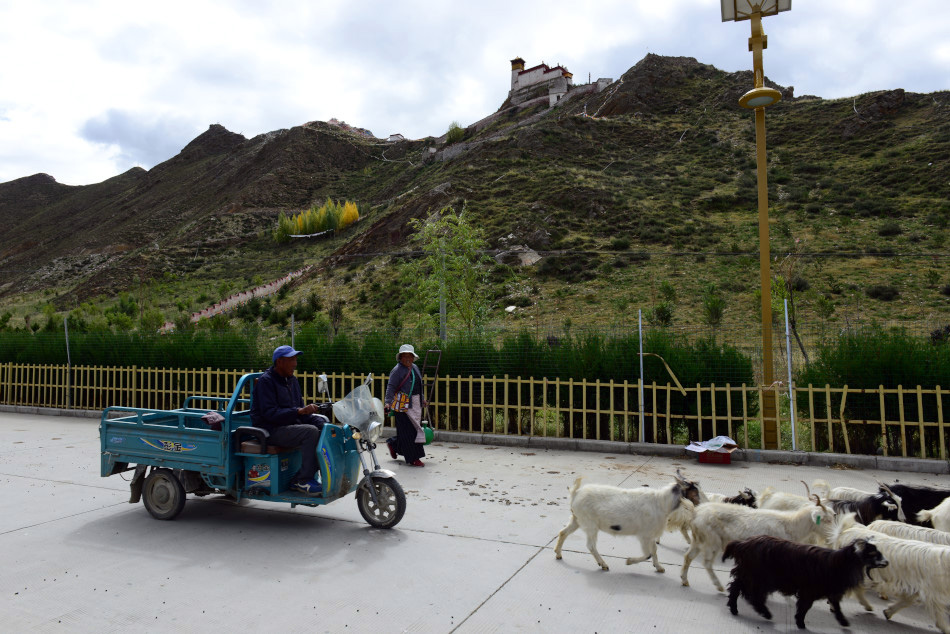 Erected atop a high ridge, the legendary Yungbulakang Palace was heavily damaged during the Cultural Revolution.  The palace then went through extensive reconstruction in 1983.

As we saw the long flight of stairs up to Yungbulakang Palace, we began to discuss how long it might take to reach the palace from the parking lot.  We soon realized that the palace was closed to the public due to a $1.5m restoration work.  That left us no choice but to turn back to the car.

Our visit to Yungbulakang turned out to be a brief photo stop.  We soon returned to the Tsetang (澤當) for lunch.  Sangzhu took us to Abba Home Tibetan Restaurant, one of the Lonely Planet recommended local restaurant.

Featuring traditional seating, the interiors of Abba Home Tibetan Restaurant was cosy and welcoming.  Almost all customers were locals.

We ordered three dishes, including the local yak beef, and invited Sangzhu to join us.

For touring in Shannan, many jeep tours would stay at Tsedang for the night.  Sangzhu suggested to stay in a smaller town further down the journey so we could save an hour’s drive at the next day.  We decided that we would stay at Samye (桑耶鎮), the village where we would visit Samye Monastery, the first monastery in Tibet and probably the most important attraction in Shannan.  After lunch, we were on our way to Samye at the north side of Yarlung Tsangpo River.  On the way, we stopped by another beautiful lookout filled with vivid prayer flags. 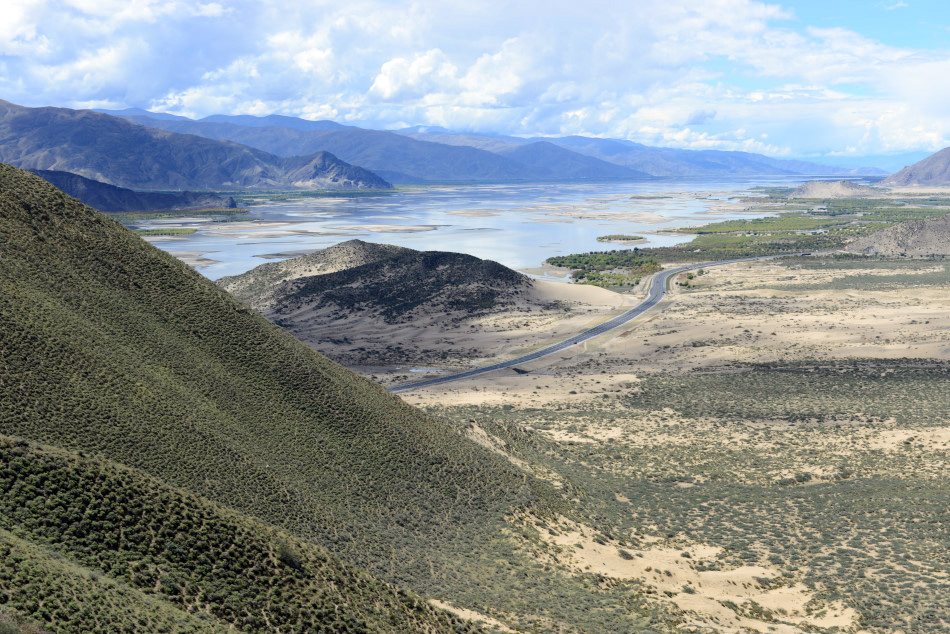 From the lookout, we could once again admire the arid landscape of the Yarlung River Valley. 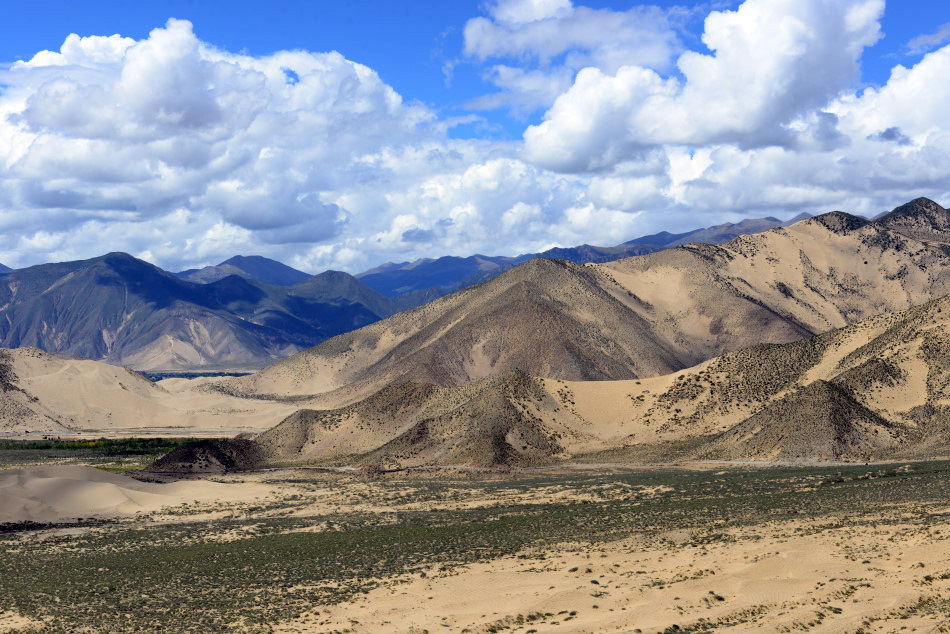 It was refreshing to take in the open scenery of the surrounding sand dunes and mountains.

The wind was really strong and we couldn’t stop for long at the lookout.  After a few photos, we continued the journey towards Samye (桑耶鎮).