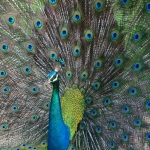 There are 26 national parks in Sri Lanka, covering an area of 5,734 km², or slightly less than 9% of the country.  As a small nation, Sri Lanka has a diverse range of wildlife, from marine mammals to other big game.  The island also has one of the highest rates of biological endemism (16% of the fauna and 23% of flowering plants are endemic) in the world.  Having a chance to see Sri Lanka’s precious wildlife in its natural habitat should be a highlight for all visitors.

With several elephant and even one leopard sightings in our first drive, any wildlife that we saw in our second safari was a bonus.  Nonetheless, it was a pleasant experience to venture into the open wilderness early in the morning, when the air was cool and birds were at their most active.  As the day warmed up after 8am, most animals seemed to be hiding in the shade somewhere, except occasional elephants that were looking for other ways to cool themselves down.  The morning safari was the final act for us before moving on to the South Coast.

Udawalawe Reservoir appeared in total tranquility at 6am.

Again our jeep passed through the Udawalawe Reservoir before entering the park.

Our morning safari began with the sighting of a golden jackal.  In both Hindu and Buddhist cultures, jackals are considered an intelligent and cunning animals.

In a safari national park, one of the easiest places to spot wildlife is the vehicular path because of the lack of vegetation.

A group of birds came together for morning choir.  Early morning, according to our driver, is the best time for birding.

An adult female white bellied sea eagle can measure up to 90cm, with a wingspan of up to 2.2m long.

Due to their high reproductive rate, good adaptability in different environments, and the diminishing of their natural predators such as leopards, jackals, mongooses, pythons, monitor lizards and eagles because of human activities, the population of peafowls has grown rapidly throughout the island.  With frequent damages to agricultural crops, the peafowls have become a headache for Sri Lankan farmers.  On the other hand, peafowls have considerably cultural significance for the Buddhist and Hindu, thus a protected species in Sri Lanka despite of their impact to the farmers.  For the Sinhalese, the peafowl is the third animal of the zodiac of Sri Lanka. 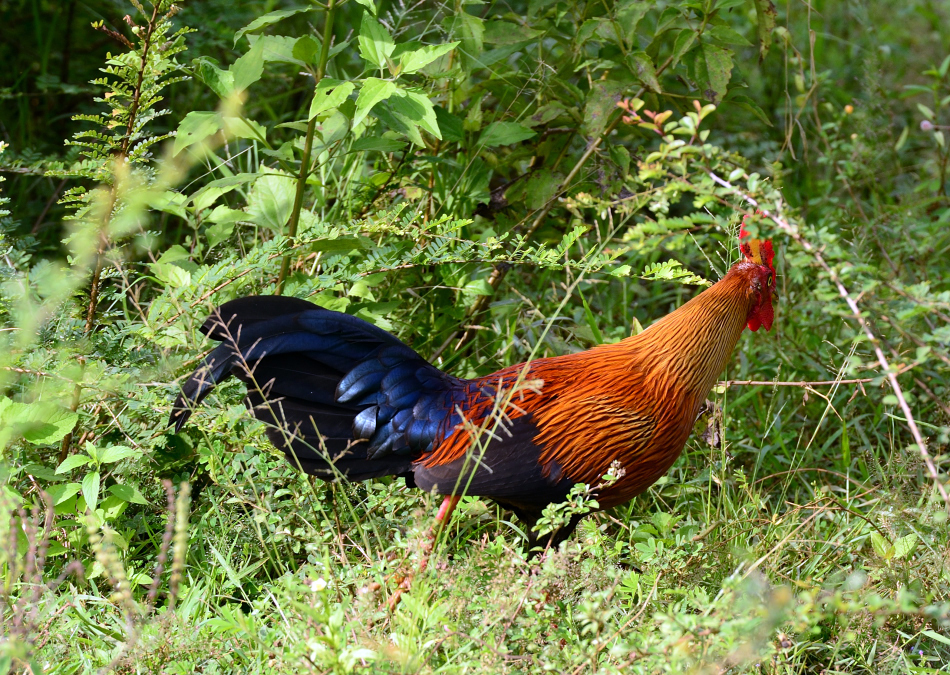 Endemic to the island, Sri Lankan junglefowl is the national bird of the country. 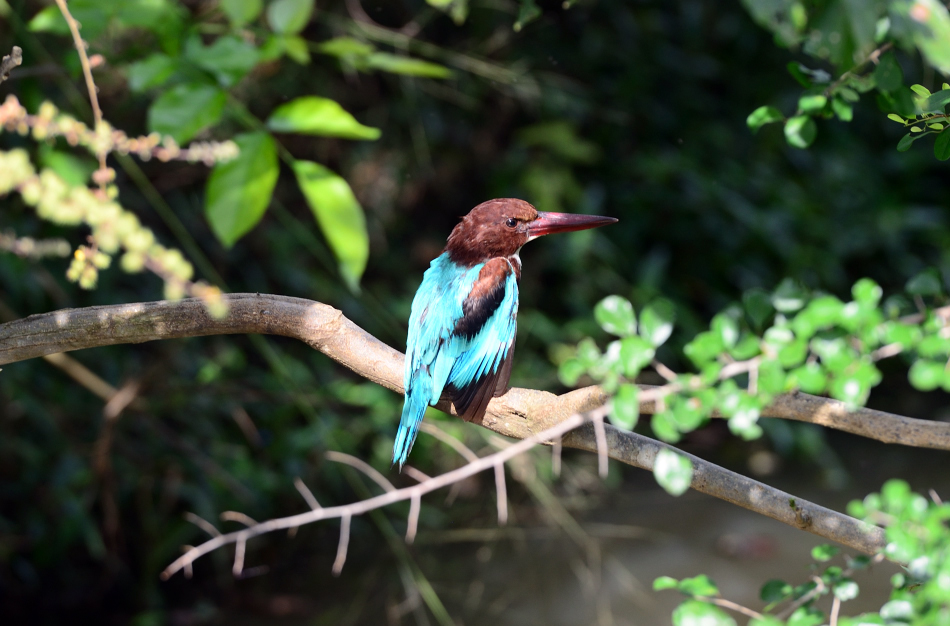 With a diet including small reptiles, amphibians, crabs, rodents and birds, white-throated kingfisher can be found throughout Asia. 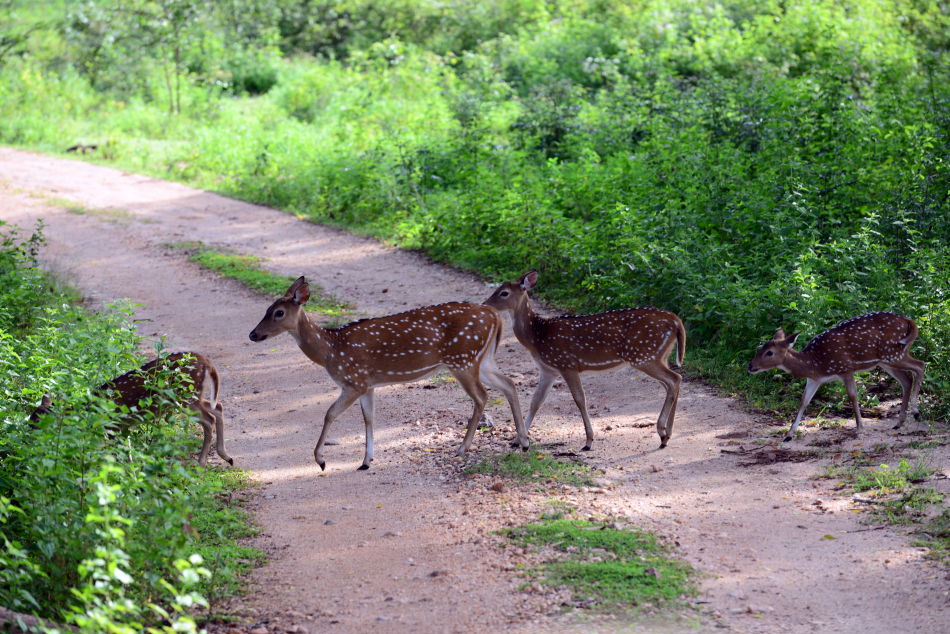 In a woodland, a group of Sri Lankan axis deer were resting under the shade.  As soon as they noticed our arrival, they immediately got up and walked away one by one.

Out of the dozen of so Sri Lankan axis deer, we only noticed one with horns.

Once again we bumped into a Bengal monitor lizard.  The one we saw was about 1.5m long.

Of course, no visit to the Udawalawe would be completed without meeting the Sri Lankan elephants.

In both safari visits, we had seen both male and female Sri Lankan elephants of various ages and sizes.

In a group of Sri Lankan elephants, we also spotted two babies who were busy suckling milk from their mothers.

Near the end of our morning safari, we had an encounter with a large male elephant. 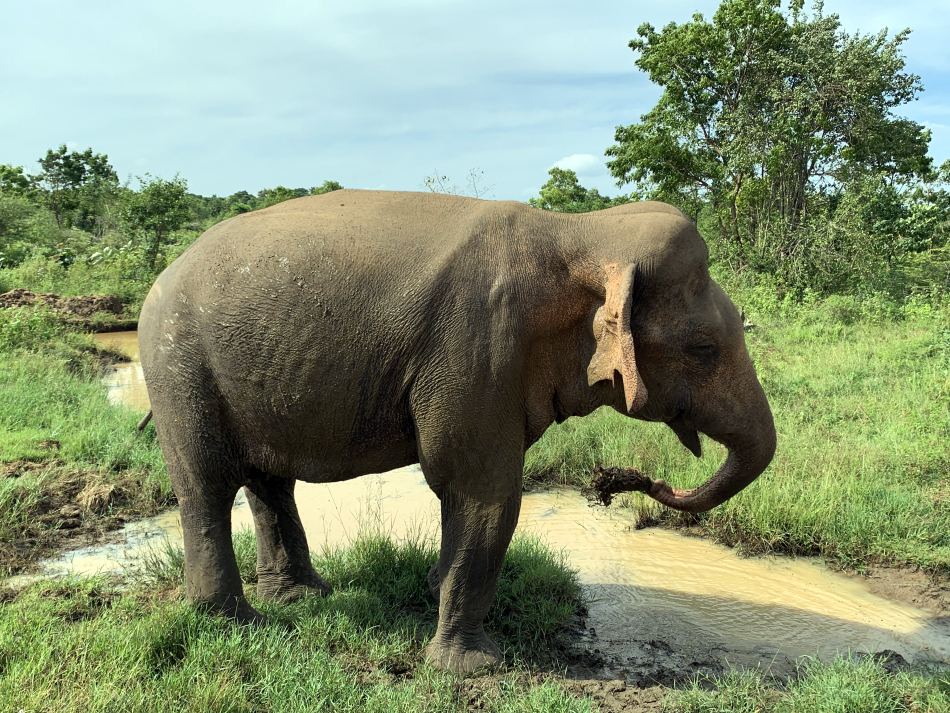 We saw him stopping at a water pond and splashed mud water onto his body using his trunk.  According to our driver, the elephant was “applying sunscreen” with the mud.  Apart from sun protection, the mud also protects him from parasite.  The evaporation of the mud would also cool off his skin.

After exiting from the park, we passed by Udawalawe Reservoir one final time.  This time, we were fortunate to see an Sri Lankan elephant bathing in the water.