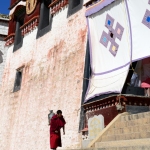 Tsongkhapa was a famous teacher of Tibetan Buddhism, whose activities led to the founding of the Gelug School of Tibetan Buddhism.  Drepung Monastery was found in 1416 by Jamyang Choje Tashi Palden, one of Tsongkhapa’s disciple.  He was also known as the second Dalai Lama.  Soon after, Drepung had become a large institution consisted of lamaseries and colleges, forming a religious community of several thousand monks at the foot of Mount Gephel.  Drepung remained as the residence of Dalai Lama until the 5th Dalai Lama moved to Lhasa’s Potala Palace.  Today, a few hundred monks resided at Drepung.  Compared to many Tibetan monasteries, damages caused by the Cultural Revolution in the 1960s and 1970s was relatively small for Drepung.

Along with Ganden Palace, the residence established by the second Dalai Lama, the four Dratsang (college and administrative organization) still exist today at Drepung Monastery.  After our kora hike, we started our brief visit of Drepung from Gomang College (果芒扎倉).  As one of the four Dratsang, Gomang has its own main Sutra Hall and a number chapels.  We were able to visit most of these spaces, including the flat roof above the Sutra Hall, despite we could not take photos inside the building.  We spent roughly two hours to wander around Drepung Monastery and its main buildings, including Loseling College (洛色林扎倉), Tsogchen Main Assembly Hall (措欽大殿), Ngagpa College (阿巴扎倉), Ganden Phodrang (甘丹頗章), etc.  The entire monastery was like a village with stairs, courtyards and winding alleyways connecting different buildings.  There weren’t many tourists around, except two groups of Western tourists in front of the Main Assembly Hall.

After a thorough wander in the monastery compound, we waited a bit at the parking lot and asked around for the minibus.  No one seemed to know when the minibus would leave.  We decided to follow several pilgrims to walk down to the main gateway.  The walk took about 20 minutes.  We walked past the main monastery gate and continued along the main retail street out to the main road.  Before we reached the main road, we flagged down a taxi who was willing to take us back to Central Lhasa.

A monk carrying a water container in front of the Gomang College (果芒扎倉).

A pilgrim with a bead necklace walking up the entrance stair of the Gomang College (果芒扎倉).

Gomang College (果芒扎倉), the second largest Dratsang (college) in Drepung, was the first building that we visited at the monastery. 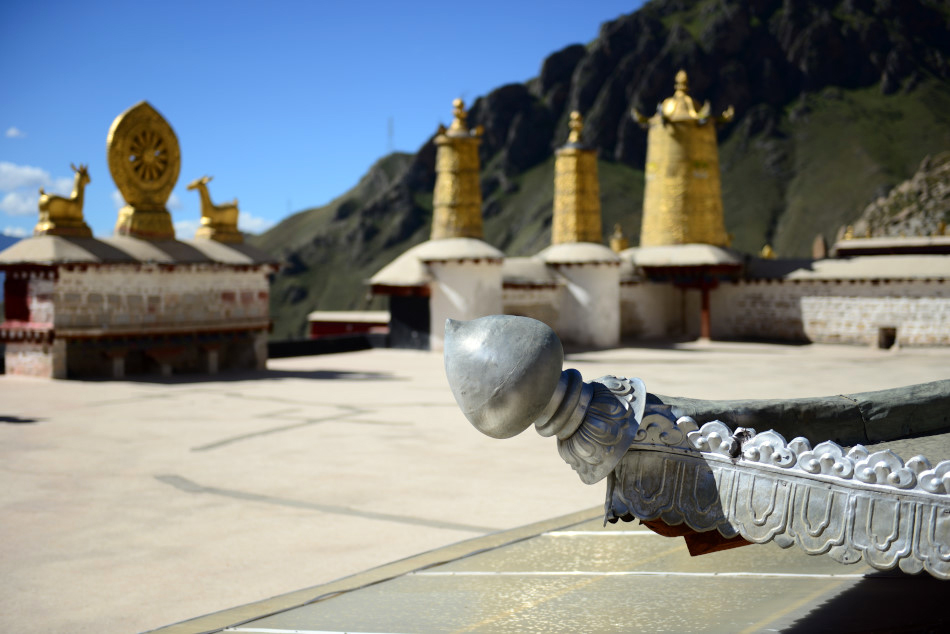 It was awfully hot with the sun above our head, but we couldn’t resist not to visit the flat roof above Gomang College (果芒扎倉).

Resembled a village, the Drepung Monastery is a huge compound with lots of buildings and alleyways. 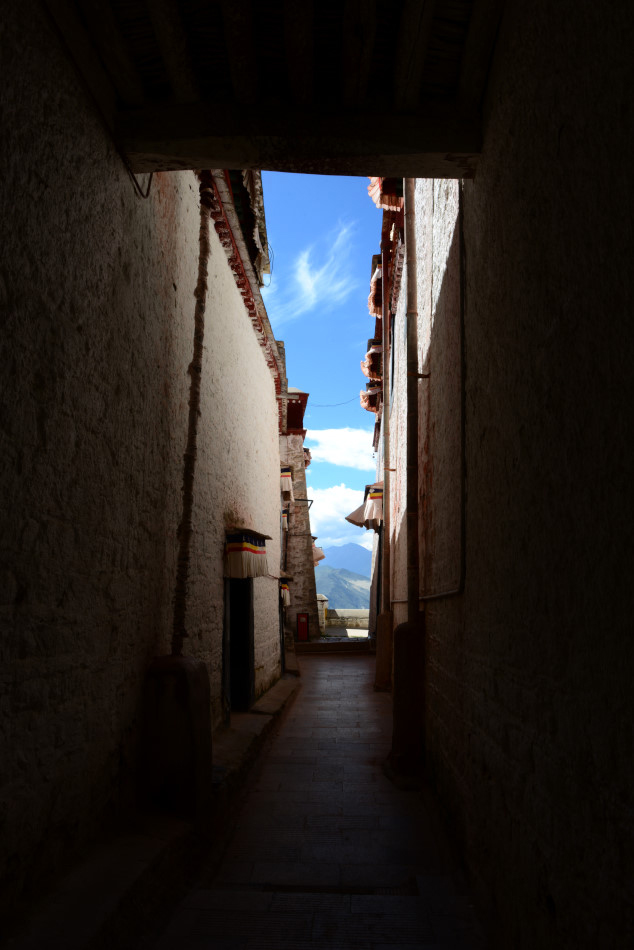 Wandering around the alleyways in Drepung Monastery was quite pleasant especially when there weren’t too many tourists around.

After a while, we soon lost track on how many buildings we had visited as most halls looked quite similar with their white walls, golden roof decorations and entrance setting.  Despite of their similarities, every single building we visited looked gorgeous both outside and inside.

With the powerful highland sunlight, most monastery windows are protected by textile awning canopies.

With 183 columns and an area of about 1800 square metres, Tsogchen Main Assembly Hall (措欽大殿) is the grandest structure in Drepung Monastery.  The plaza in front of the hall is also the largest square in the compound. 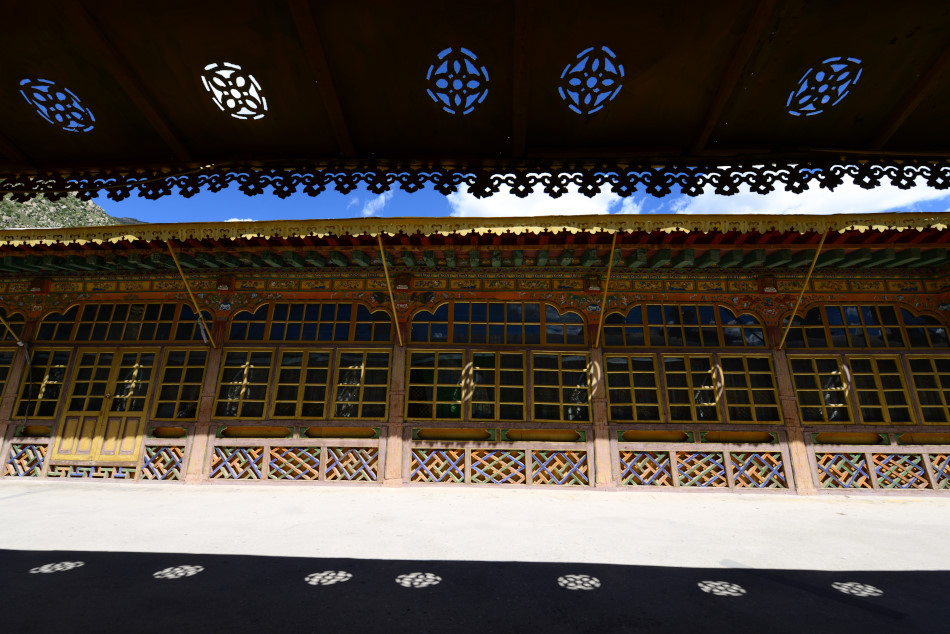 The roof above the Tsogchen Main Assembly Hall (措欽大殿) is well worth a visit.

The row of windows on the left is actually celestial windows for the main assembly hall below.

A group of local tourists posted for photograph on the roof terrace of Tsogchen Main Assembly Hall. 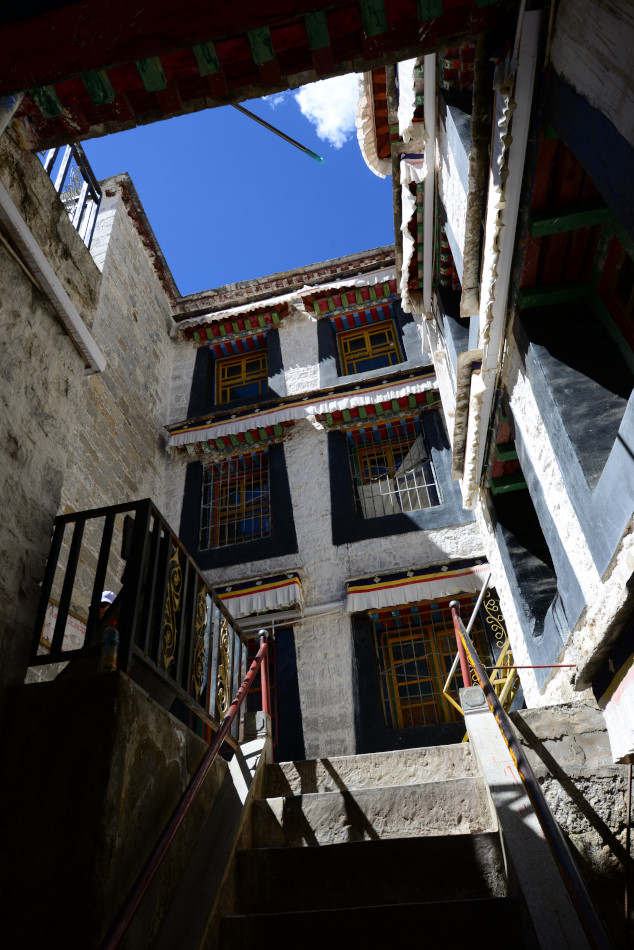 We meandered through narrow alleyways and stairs between buildings. 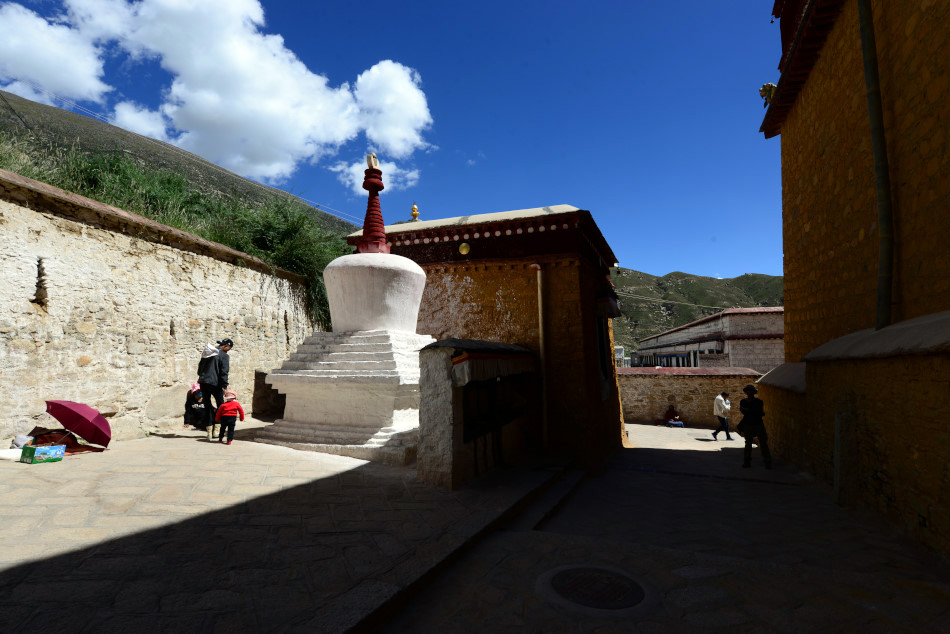 Occasionally we would pass by small stupas where pilgrims would circle around in clockwise direction.

Loseling College (洛色林扎倉), the largest Dratsang (college) in Drepung Monastery, was another highlight in the monastery.

Before the establishment of the Potala, Ganden Phodrang was the residence of the Dalai Lama from the 2nd to the 5th Dalai Lama.

Our visit of the Drepung Monastery ended at Ganden Phodrang (甘丹頗章).