Held every year in the fourth month of the lunar calendar, Cheung Chau’s Bun Festival, or “Tai Ping Ching Chiu” in Cantonese, is comprised of a series of Chinese religious rituals, a massive street parade, and a bun-snatching race.  I never got a chance to experience the Bun Festival in person; but the old photographs of the bun-snatching race, in which dozens of strong men climbing madly up to the top of a multi-storey high bun mount collecting the white buns, have captured my attention since I was a child.  Unfortunately, due to an accident in 1978 the race was banned before I was even born.  In 2005, the government reintroduced a new bun-snatching event known as the Bun-Snatching Carnival, and has since then promoting it as the regional cultural event in Hong Kong.

Dated back to the 18th century, the Bun Festival is a religious event dedicated to the Taoist deity of Pak Tai, whose power was credited for stopping a devastating plague and chasing off evil spirits.  Every year the forecourt of Cheung Chau’s Pak Tai Temple is transformed into the main festival ground, where gigantic bun mounts are displayed, a temporary stage for Chinese opera is set up, and a bamboo shelter is erected to house three huge papier mâché deities.  On the weekend before this year’s bun-snatching festival, Cheung Chau was already packed with visitors who came to check out the preparation of the festival, the bun mounts, lion dances, Chinese opera performances and other religious rituals that officially kick-start the festival. 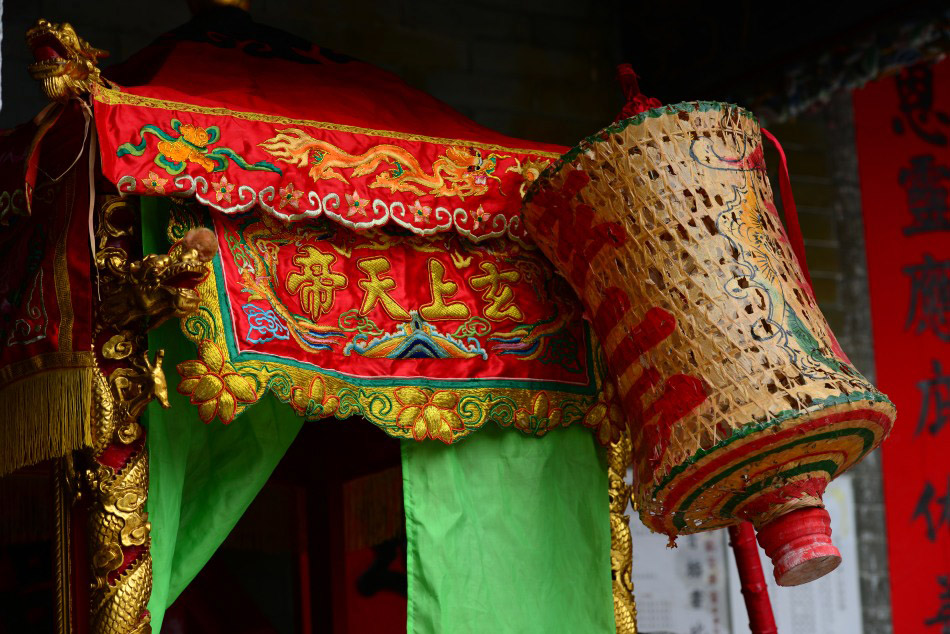 Religious crafts donated by local families were displayed in front of the Bai Tak Temple. 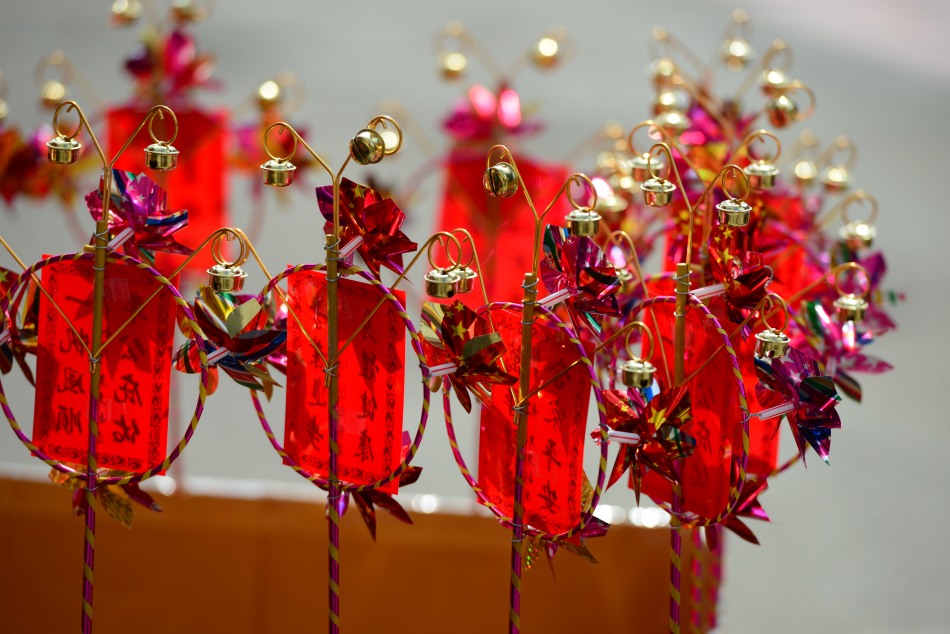 Traditional lucky wheels, the  popular merchandises at the festival ground.

Community groups were busy setting up the bun mount displays. 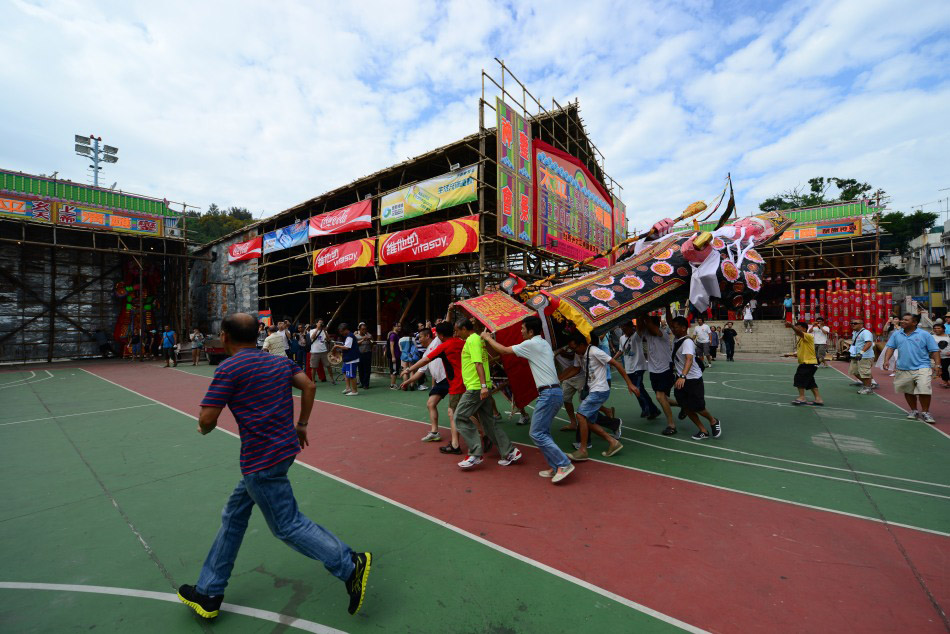 There were many actions around and a group of men unexpectedly running towards my direction from nowhere with the huge papier mache deities which were being relocated into a bamboo shelter at the festival ground.

The temporary stage for Chinese Opera would become a focal point after sunset.

Donor recognition wall at the back of the temporary stage for Chinese opera, with each name and donation amount handwritten on bright orange papers

After sunset, the lights at the festival ground unveiled a romantic ambiance.  The three huge bun mounts looked even more impressive with the floodlights. 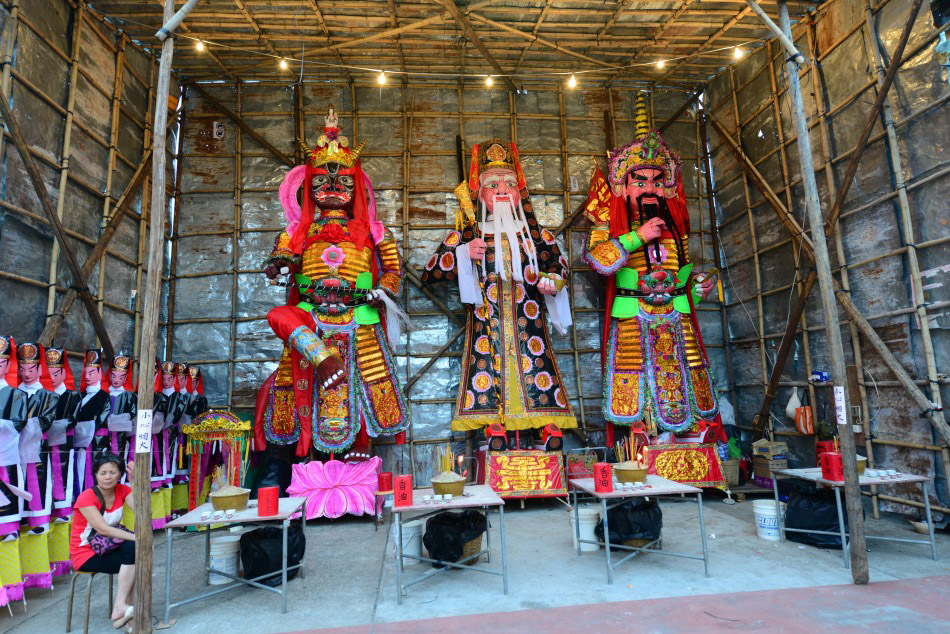 The three papier mache deities were displayed at a temporary shrine.

A woman came to check out the donor list.

There were a few spots for deities worship within the festival ground.

Both the huge and small bun-mounts were made with real Chinese buns.

There is always lion dance performance for large Chinese celebration.

Just 45 minutes of ferry from the Central Ferry Piers, the Island of Cheung Chau is one of the last fishing communities in Hong Kong.  As a grown up who has come to terms with the ever-changing cityscape of Hong Kong, visiting the island’s narrow laneways, fishermen marinas, historical temples, crumbling buildings, shabby souvenir shops, and cluttered seafood eateries is like wandering in an atmospheric film set of Hong Kong decades back in time.  Cheung Chau has always been a highly popular weekend getaway destination among families with kids, teenage groups, young couples, and amateur photographers.

Cheung Chau was one of the earliest inhabited spots in the territory of Hong Kong.  Spending most of their lives on boats, the early settlers originated from various fishing communities in Southern China.  Living off the sea is no longer the case, but the people of Cheung Chau nowadays still maintain a unique seafolk culture.  Perhaps it is no surprise that the island was the birthplace and training ground of Lee Lai Shan, the first Olympic gold medalist of Hong Kong who made history by competing in the sea for windsurfing.  A little further back in history, Cheung Chau was also the legendary “treasure island” of pirate Cheung Po Tsai, who roamed the waters of South China Sea with his 50,000 strong followers in the early 19th century.  Each year around early May, the people in Cheung Chau is busy preparing for its annual cultural celebration – the Bun Festival.

Life remains casual with a sense of community on the island.  It’s common to see public space being taken over by private use. In this case, seafood eateries have their table clothes hanging on the concrete balustrade for drying under the sun.

People visit Cheung Chau for various reasons with noon would argue the sense of tranquility in a low dense streetscape on the island  is a rarity in Hong Kong. 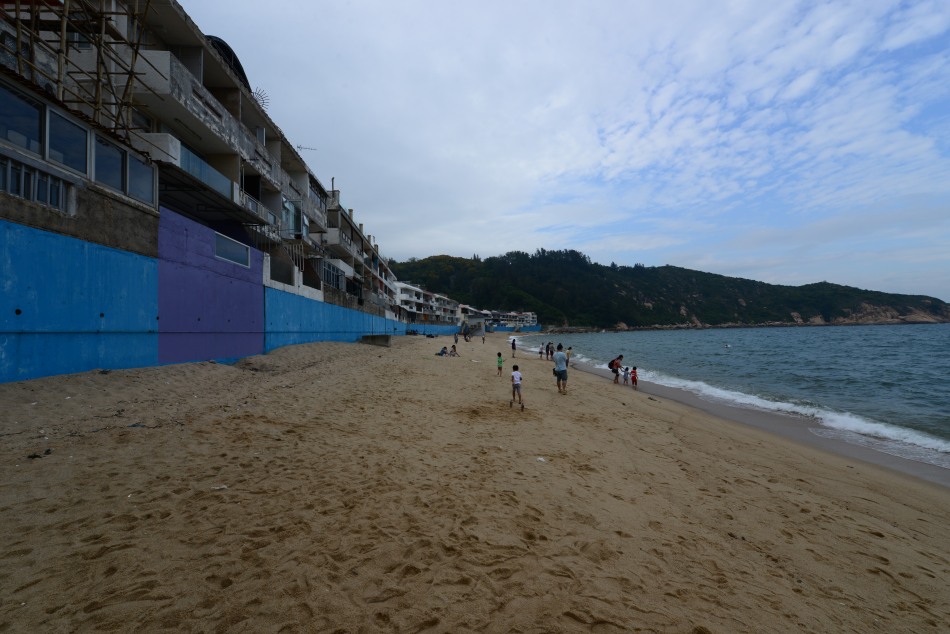 Buildings such as this abandoned cinema are in crumbling conditions but preserve a sense of history.

There are a number of century old temples on the island where tourists rub shoulders with local worshipers.

The fishballs from Kam Wing Tai are popular local specialties made on the island.

Dry seafood of various kinds can be found everywhere on the island.

No visitors would leave the island without feasting at one of the local seafood eateries along the waterfront. 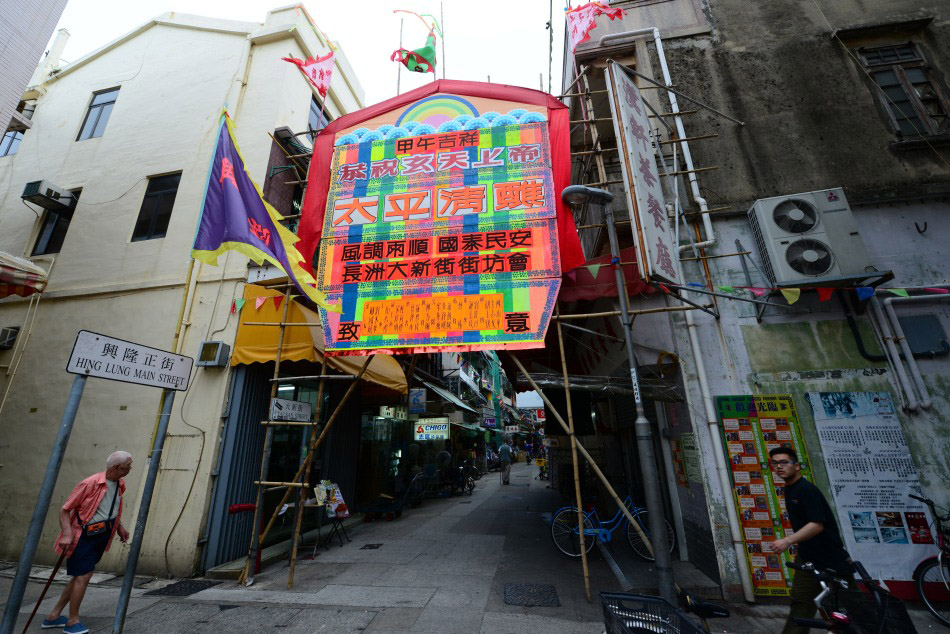 The islanders are getting ready for the upcoming multi-day celebrations of the Bun Festival.

Throughout much of the 20th century, Hong Kong has undergone massive economic development and urban transformation, from a small trading port before WWII to one of the most successful industrial capitals in Asia in 1970s.   From 1980s on, most of the city’s manufacturing industries have moved to either China or elsewhere in Asia. Today, large numbers of industrial buildings that once housed almost half of Hong Kong’s work force have been given a “second life” and converted into various spaces for light manufacturing, creative industries, storage facilities, or small offices for all kinds of businesses.  JCCAC in Shek Kip Mei is a recent example of adaptive reuse of former industrial building in Kowloon, Hong Kong.

Opened in 2008, Jockey Club Creative Arts Centre (JCCAC) is a “multi-disciplinary arts village and art centre”, providing affordable studios and exhibition facilities for the art and design community.  The centre welcomes the public to visit the shops, studios and café within the complex 7 days a week.  From time to time, JCCAC would host shows and design fairs to further engage the public and the immediate neighborhood.

I visited JCCAC during its annual handicraft fair. Much of the ground floor atrium was turned into a market fair, while many studios on the upper floors had their handicraft shops open to the public.  The open roof was animated by various activities.  At one corner, a patio was packed with stalls selling vintage clothing, housewares and books.  At the other corner people were lining up for henna art.  On the wall adjacent to the main stair was a photo exhibition with the theme on local community.   A local band brought in live music to create an upbeat atmosphere.  Looking out from the roof parapet, layers upon layers of apartment blocks seemed never ending.   Recent effort by the housing department to upgrade or redevelop the old housing estates in Kowloon was clearly visible from the vivid new paint colours on the apartment facades, planters with local flora, and new green roof design. 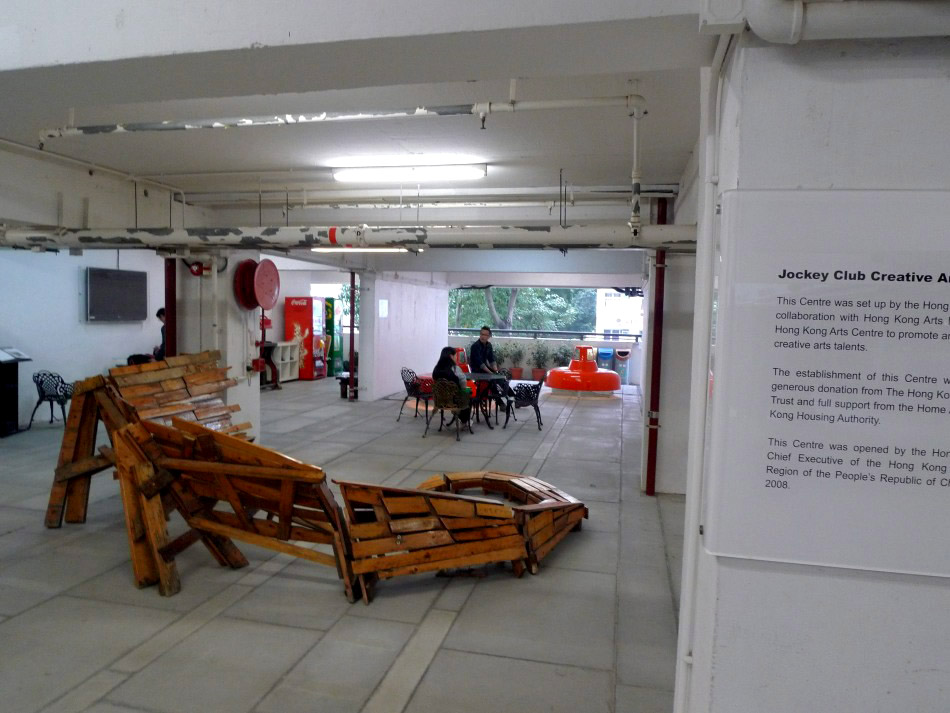 Angela and I started “Blue Lapis Road” in 2013 to publish a photo journal of our backpacking trip to South America as we wandered through the vast continent in 90 days.  It has been over 3 months since we left Valparaiso of Chile, the last destination of our S.A. trip.  Since early March, I have relocated to another continent and started a new life chapter in Hong Kong, a city that I was once very familiar with as I spent my childhood here two decades ago.

In the next chapter of “Blue Lapis Road”, we are going to share with you our explorations in this magnificent metropolis, Hong Kong.

Plaza de la Ciudadania is situated right in front of Palacio de la Moneda, the neoclassical building housing the Chilean presidential office.  Under the plaza there lies Centro Cultural Palacio la Moneda, a new underground cultural complex consisted of theatres, exhibition spaces and shops.
Before we left Santiago for Valparaiso, we spent the morning visiting the cultural complex.  The ramps in the atrium that connected all floors were pretty interesting.  Natural light lit up the entire atrium through the glass roof cladding that belongs to the floor finish of the plaza above.
At 2pm, we arrived at one of the main bus terminals in the city for transportation to Valparaiso.  In two hours we would finally arrive in Valparaiso, the very last stop of our journey! 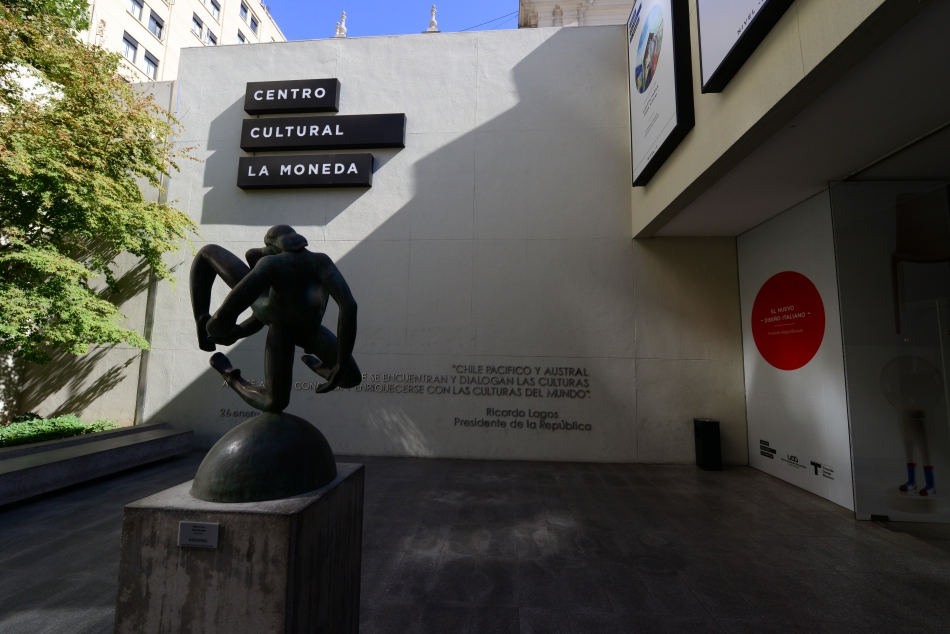 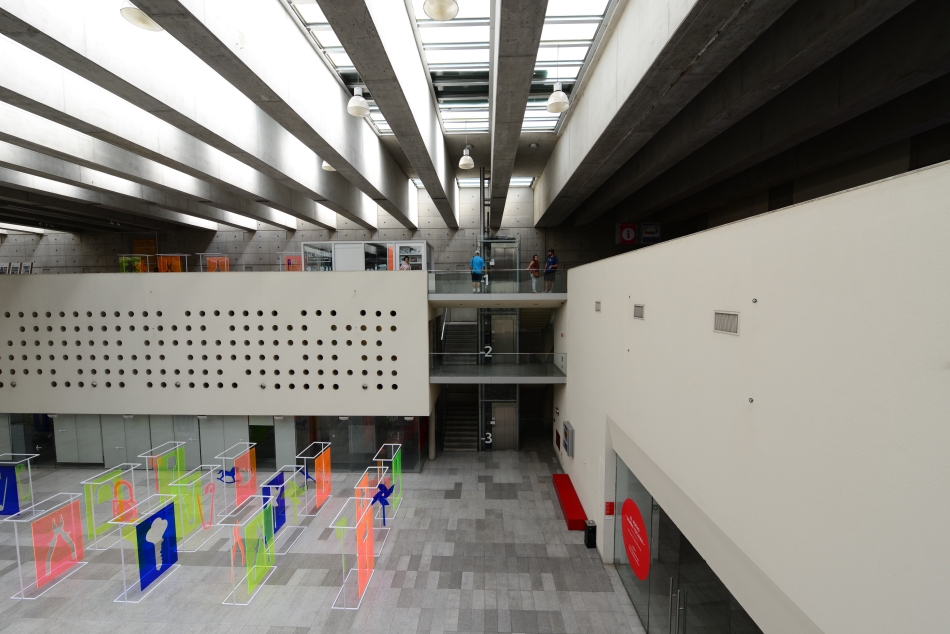 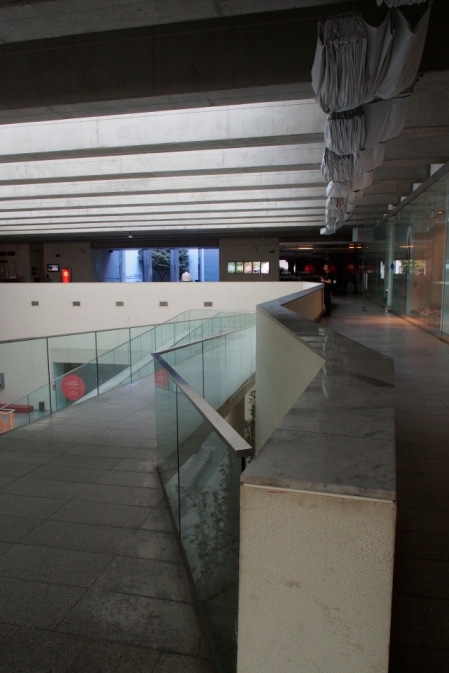 Knowing that we would be visiting Sao Paulo at the time of the architecture biennale was a delightful surprise when we planned our trip.  After visiting two smaller biennale exhibitions at the SESC and MASP, today we spent the afternoon at the Cultural Centro Sao Paulo (CCSP), one of the bigger biennale venues.  When we entered the cultural centre, we were delighted to find that CCSP itself has its own merits architecturally.  Designed by Eurico Lopes and Luiz Telles, the CCSP is famous for its prominent structural system and the impressive ramps in the main hall.  Located on three levels of exhibition spaces, we took our time checking out some of the interesting projects on display for the X Architecture Biennale Sao Paulo.  Other than the visitors of the biennale, there were also people engaged in different activities throughout the complex: street dancing at the foyer, ballet rehearsal in an open studio, chess tournament at the covered plaza, studying and reading in the library, resting on the roof-top patio, etc.

It was already mid afternoon when we arrived in Sao Paulo. Seeing architecture would be our main focus for our short stay in the city. Our first destination was SESC Pompeia (Servico Social do Comercio of Pompeia in Sao Paulo).
The SESC Pompeia is a cultural centre located in a residential neighbourhood near the metro station of Barra Funda. Designed by the renowned architect Lina Bo Bardi in early 1980s, the project is a successful example of a multi-functional architectural complex. In contrast to the monumental buildings in Brasilia or the playful architecture in Rio de Janeiro, many projects in Sao Paulo are social oriented. The project involves transformation of a number of historical buildings into cultural spaces, and an addition of sports tower with a modernist concrete tower and multiple expressive sky bridges. Functionally, the complex offers a diverse program to the local community, from theatrical performances, cultural exhibitions, library, reading rooms, event spaces, cafeteria, to an indoor swimming pool and a number of indoor football courts. All cultural spaces are housed in the adaptive reused historical buildings, while the sport facilities are stacked in the new concrete tower.
When we were there, SESC Pompeia was filled with people at all ages engaging in various activities: dining at the outdoor patio, reading in the library, checking out the cultural exhibitions, going to the gym and swimming pool, etc. We even saw a group of artists doing some filming, and a group of technicians preparing a banner on one of the concrete sky bridges at the tower for the next cultural festival. The three current exhibitions at SESC were good introduction to the cultural scene of the city for both of us. 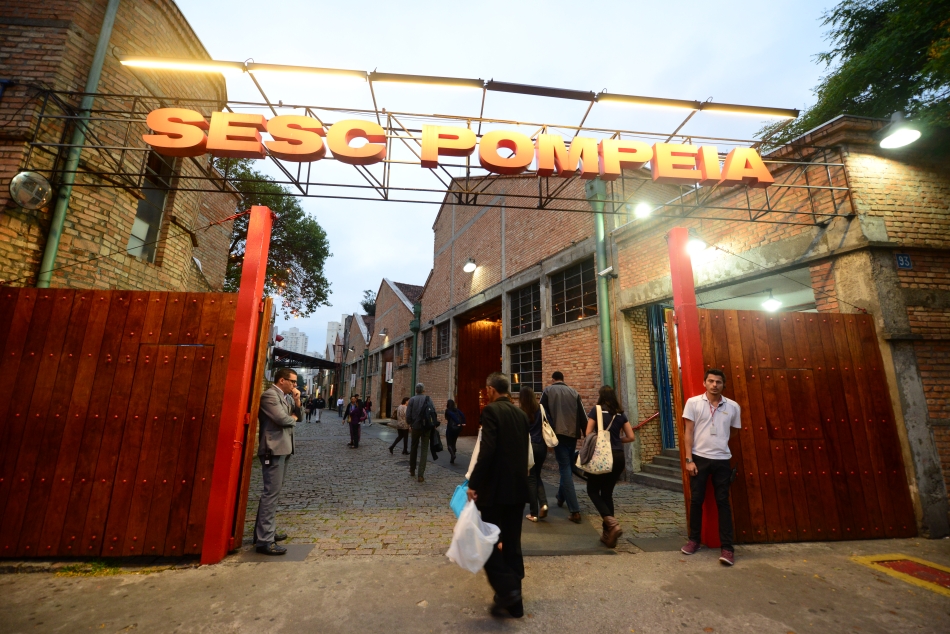 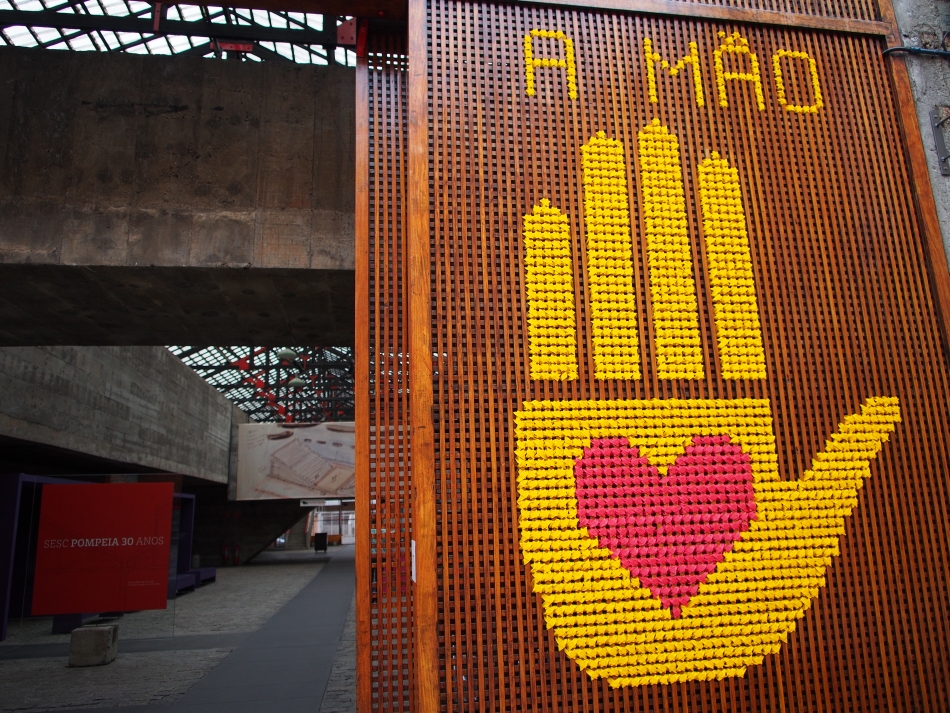 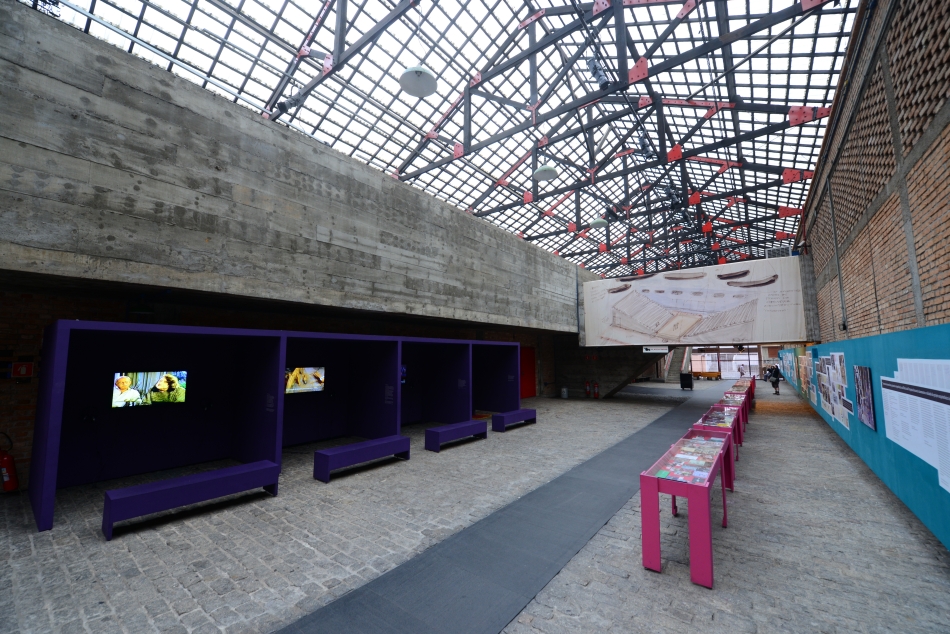 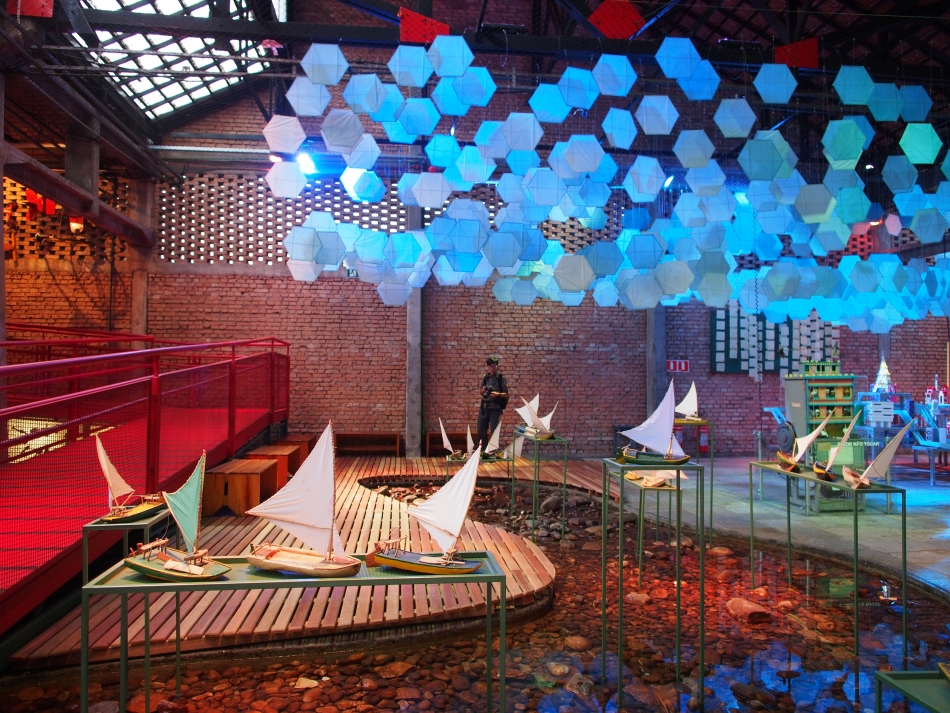