In March 1992, Space Design, a Japanese monthly journal of art and architecture published a special feature on “Hong Kong: Alternative Metropolis” as its Issue 330. One of its articles was “Ue-no-michi”: Floating Way – Central New Town, which introduces to Japanese readers the Central Elevated Walkways, an extensive footbridge network that connects a significant numbers of office towers and shopping centres in the central business district of Hong Kong. The authors mapped out the system, and examined its significance on master planning and urban development of the city. In fact, this pedestrian circulation system has long been a well known reference case for urban planning studies around the world. Without touching the ground, one can pass from one office tower to another, or transfer from a ferry pier to a bus terminal, or access to restaurants, shops, services, hotels, apartments, post office, banks, or ascend to the Mid Levels from the harbourfront. Not only does the network enhances pedestrian connectivity in Downtown Hong Kong, it also offers a safe, weather protected, well lit, clean, convenient, and sometimes air conditioned public space network several metres above the dust, noises and air pollution of the streets. Separating pedestrian and vehicular circulations is also beneficial to vehicular traffic on the streets, where pedestrian traffic lights can be placed much further apart.

The Central Elevated Walkway began in 1970’s, when developer and Central’s biggest landlord Hongkong Land (置地) constructed a footbridge between Connaught Place (now Jardine House), Swire House (now Chater House) and the General Post Office. From then on, the government, developers and banking corporations continue to expand the network to include more buildings and bridge connections. Similar strategy has been adopted elsewhere in the city, notably in business districts Admiralty and Wan Chai, entertainment district Mong Kok, industrial district Tsuen Wan, etc. In 2012, architects and scholars Adam Frampton, Jonathan Solomon and Clara Wong published Cities Without Ground: A Hong Kong Guidebook. The three architectural scholars provide a detailed analysis of the elevated walkways in Hong Kong with beautiful isometric maps. Apart from pedestrian circulation, the book also celebrate the social aspects of the raised spatial system as an essential and integral layer of the city.

Navigating the labyrinth of elevated walkways in Central is not as difficult as one may think, as users can always rely on the clear signage and street scenes below to orient themselves. Elevated several metres above ground, the walkways offer a unique vantage point to enjoy the urban scenery of the financial district. Every Sunday, the covered elevated walkways and adjoining podiums would be turned into a gathering point for foreign domestic helpers in Hong Kong. Sitting in small groups on folded cardboard, the domestic helpers (mainly from Philippines and Indonesia) would gather and eat, chat, pray, dance, sing karaoke, tell jokes, watch smartphone videos, play card games, make long distant video calls, etc. The walkways where normally dominated by quick pace pedestrians would suddenly become a vibrant social hub as if a public park. 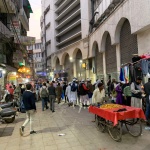 Before dinner, the last activity of our Indian journey 2018 was a guided tour in Nizamuddin Basti, a 14th century community centered around the shrine of the Sufi saint Hazrat Nizamuddin Auliya.  Despite located just ten minutes of walk from the UNESCO World Heritage site Humayun’s Tomb, the Muslim neighborhood is relatively under visited.  From online research, we learnt about the local charity organization, the Hope Project, offers tour of the community for anyone who is interested in the Nizamuddin Basti neighborhood.  Found by Sufi teacher, Pir Vilayat Inyat Khan, the Hope Project runs a community health centre, a school, vocational training classes, credit program, etc in Nizamuddin Basti.  Through email, we arranged a guided tour of the basti with them.  Unfortunately, we were running late by the time we left Humayun’s Tomb.  We weren’t sure if our arranged tour was still available.  After entering the neighborhood, it took us quite some time to locate the office in the midst of busy lanes.  Gratefully, the staff there were willing to take us for a walk, despite the mosques had closed.  After the walk in Nizamuddin Basti, we took the metro to United Coffee House at Connaught Place for dinner.  We had also dined there on the last day of our trip back in 2016. 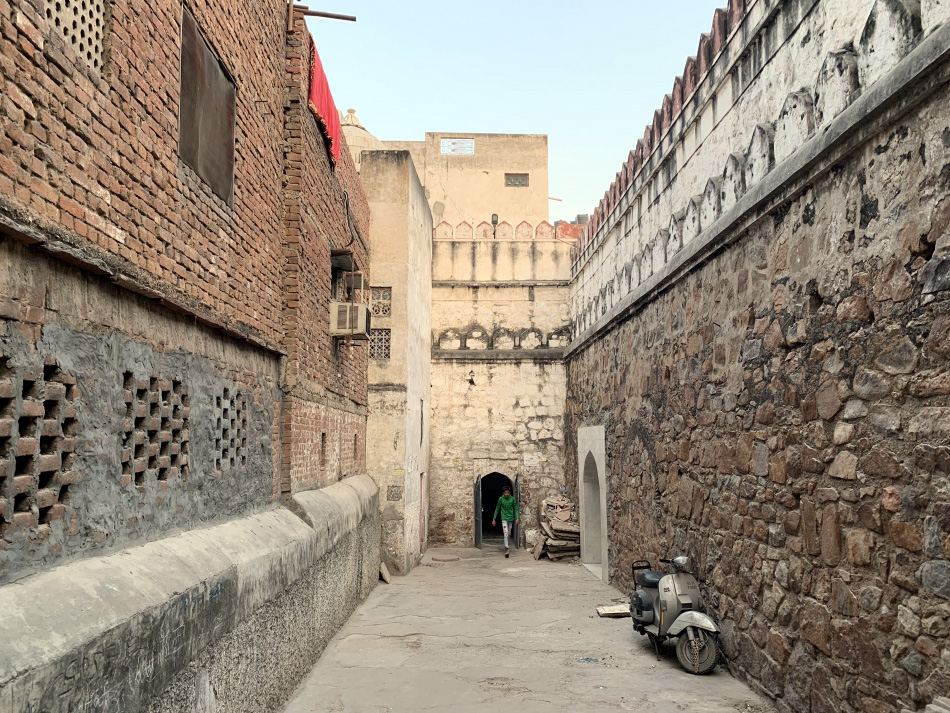 The first thing we encountered was the outer wall of Kalan Masjid, also known as Kali Mosque or Large Mosque.  The mosque was built in 1370.

We passed by the entrance of the Kalan Masjid, but were unable to enter the complex.

All the lanes in Nizamuddin Basti were busy with people and motorcycles.

Basti residents can find everything they need in their historical neighborhood. 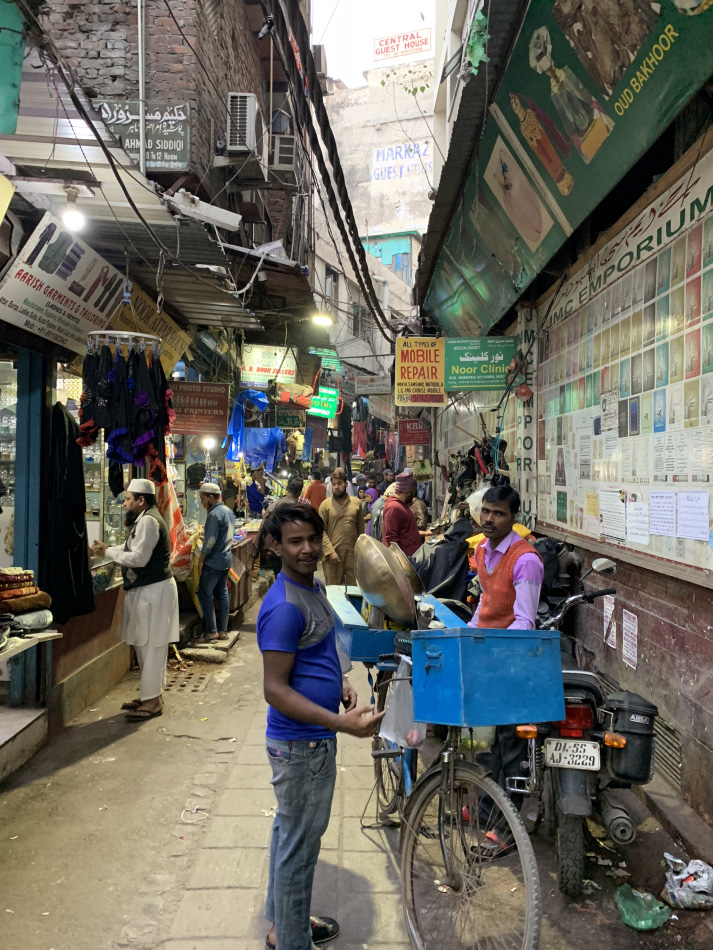 Many locals smiled to us while we toured around the 600-year old neighborhood.

Through the historical gateway, we entered to the forecourt of Chausath Khamba, the tomb complex built by Mughal noble Mirza Aziz Koka in 1623 at the time of Emperor Jahangir.

The forecourt of Chausath Khamba was recently landscaped by the Aga Khan Trust. 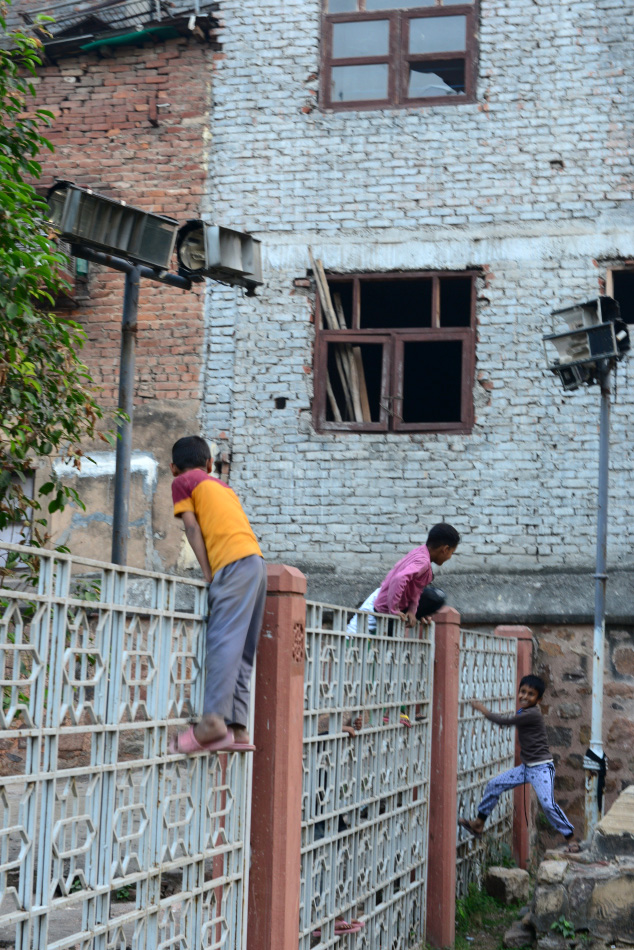 The forecourt of Chausath Khamba is frequented by children coming to meet friends and play cricket.

The actual Chausath Khamba is a square shape marble building supported by 64 columns. 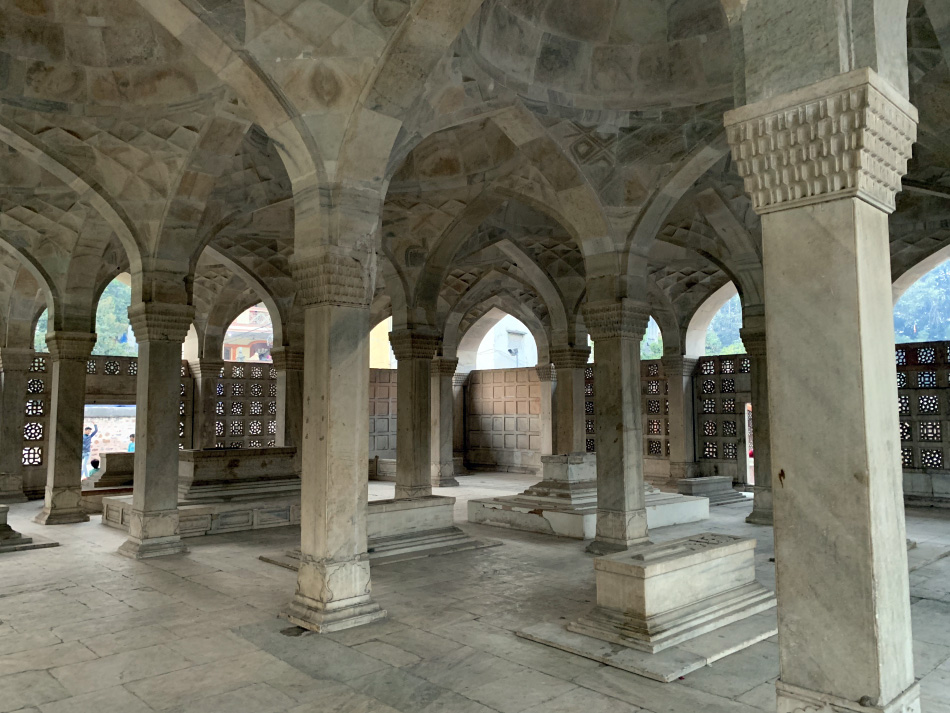 The marble hall is divided into 25 bays and covered by 25 domes concealed in the roof structure.

Adjacent to Chausath Khamba stand the Ghalib Academy and Mazar-e-Ghalib, the tomb of Ghalib, a famous 19th century Persian poet.  Our tour with the Hope Project ended at Mazar-e-Ghalib.

On our way out of the neighborhood, the street eateries reminded us that it was almost dinner time.

The monumental and modernist Nizamuddin Markaz Mosque is the centre for the Tablighi network.  It was busy with evening prayers as we left the basti. 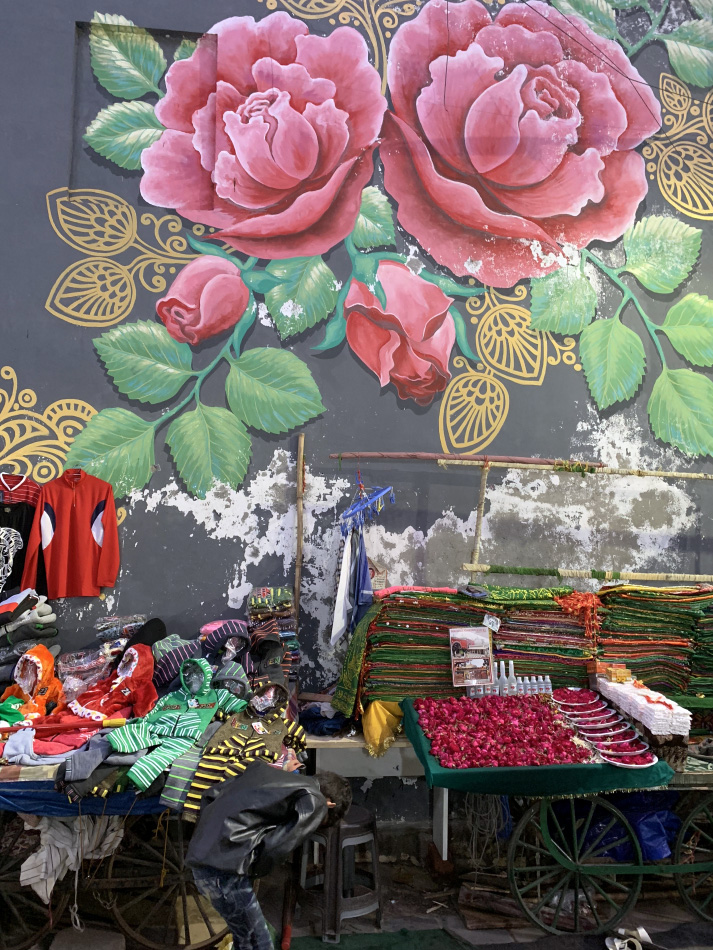 Due to the Sufi request for divine love, rose is popular among locals. 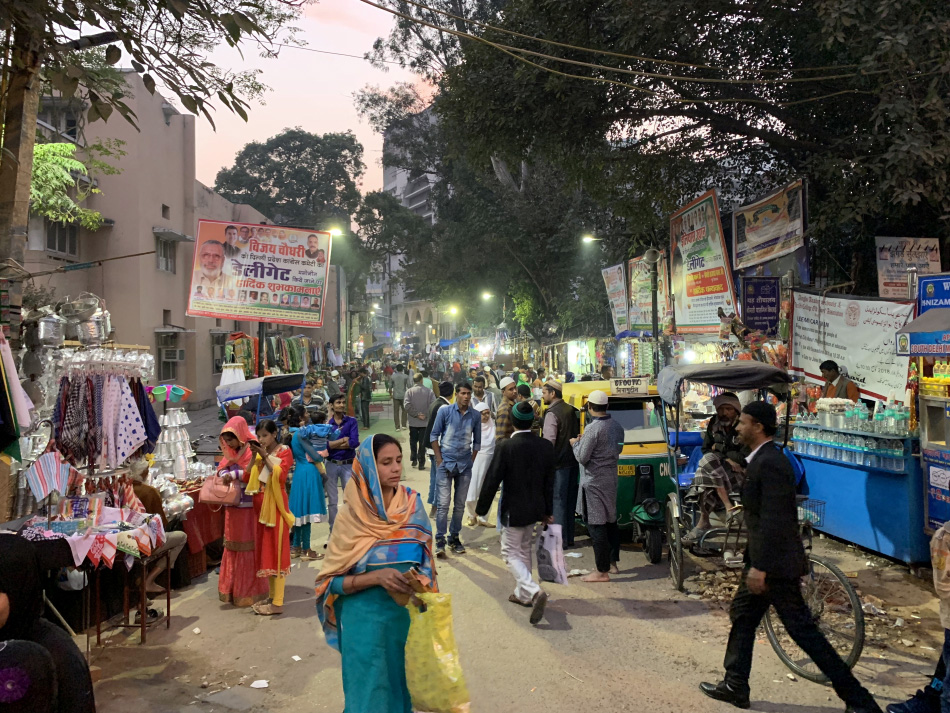 We followed the main road out towards Mathura Road, where we could walk back to the metro.

We then took the metro to Connaught Place for dinner.

Just like two years ago, we sat down at United Coffee House for their local Indian cuisine.

We sat down at a table on the ground floor and took our time to enjoy the meal and ambience of the restaurant.

Another night flight to return home, another wonderful Indian journey completed.  We returned back to the Airport Express Station to pick up our backpacks and hopped on an airport bounded train.  This concluded the record of our India 2018 trip.