THE BRIDE OF DESERT, Palmyra, Syria

Khaled al-Asaad, the most renowned archaeological expert on Palmyra, has devoted his whole life studying, promoting and protecting the ancient city.  Spent 40 years (1963 – retirement in 2003) as the head of antiquities and main custodian of Palmyra, the 82-year-old archaeological consultant played a major role in evacuating the content of the city museum as Palmyra was fallen into the hands of ISIS.  He was captured by the terrorist group, interrogated for a month on the whereabouts of hidden golden artefacts, refusing to give in despite brutal tortures, and beheaded publicly by the ISIS at the museum square.  His mutilated body was then brought to the ruins and hung from one of the Roman columns.  Asaad was loyal to his passion and destiny until his very last breath.  In his decades long career, Asaad organized archaeological expeditions in Palmyra, worked with different archaeological missions from around the world, curated exhibitions of Palmyrene artefacts, and promoted Palmyra to become a UNESCO’s World Heritage site.

Literally means “city of palms”, Palmyra was often referred to as the Bride of the Desert.  For ancient caravans, Palmyra was a vital stop along the Silk Road.  Palmyra lies on an ancient trade route between Homs and Dura-Europos.  From Homs merchants could go further west to Tyre, a large Lebanese port city connected to the Mediterranean; and from Dura-Europos, trade routes would extend eastwards along the Euphrates to the Persian Gulf, where access to the Indian Ocean and China could be made.  Palmyra gained significance after the Nabatean Empire collapsed in AD 106, where earlier trade routes between Arabia and the Mediterranean would converge in Petra.  In the first century AD, Palmyra became part of the Roman Empire and one of the wealthiest cities in Near East.  Palmyra was named by the Roman Empire a “free city” with tax exemptions for trading.  Merchants of Palmyra flourished along the Silk Road and in the  Roman Empire, bringing a large amount of wealth back for construction projects.  The desert oasis became a melting pot of cultures from east and west due to international trading.  Art and architecture of Palmyra blended influences from Greece and the Roman Enpire in the west and Persia and further beyond in the east into its unique culture.  In the 3rd century AD, Queen Zenobia conquered parts of the Eastern Roman Empire and established the short-lived Palmyrene Empire.  The legacy of ancient Palmyra is such an important world heritage that its cruel destruction by the ISIS was particularly painful to see.

Given the severe damages to the site, unstable security conditions in the region and the constant risk of landmines, it could take many years before the World Heritage Site can regain its former popularity as Syria’s top tourist attraction.  In 2006, we spent a fine morning at the archaeological site of Palmyra.  To avoid the desert heat, we get up 05:30 in the morning, and left Citadel Hotel to spend three hours in the ruins, checking out its temples, colonnade, theatre, road intersection, etc.  We left the ruins at 08:45, and headed to the post office to send postcards.  We dropped by the Palmyra Museum to see the mummies, and stood outside Pancake House to wait for our prearranged transportation for the closest bus station.  To our surprise a pickup truck came instead of a mini-van.  We all sat down at the back of the truck for a 5-minute journey in the desert.  The truck dropped us off at a local tea-house, where we hopped on a regional bus bounded for Damascus.  After 3.5 hours we finally arrived at the renowned Syrian capital, Damascus. 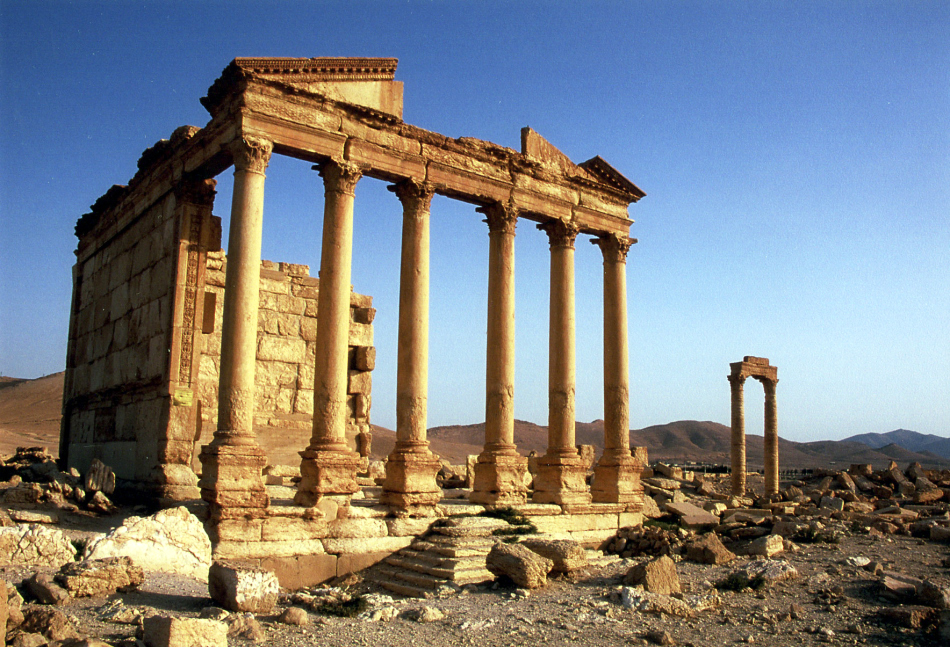 Built in 3rd century AD, the Funerary Temple no. 86 was the only tomb erected inside the ancient city.

Beyond Funerary Temple no. 86, the majestic Palmyra Citadel or Tadmur Castle stood proudly above the horizon.  Despite severely damaged, the castle is considered repairable by the Syrian government.

In 1950s, the Roman Theatre of Palmyra was cleared of sand and extensively restored.  Before the civil war, the theatre would host folk music concerts during the annual Palmyra Festival.

Labelled as a “war crime” by the UNESCO, the magnificent central proscenium was purposely damaged during the ISIS occupation.

Adjacent to the Roman Theatre stood the Senate Building. 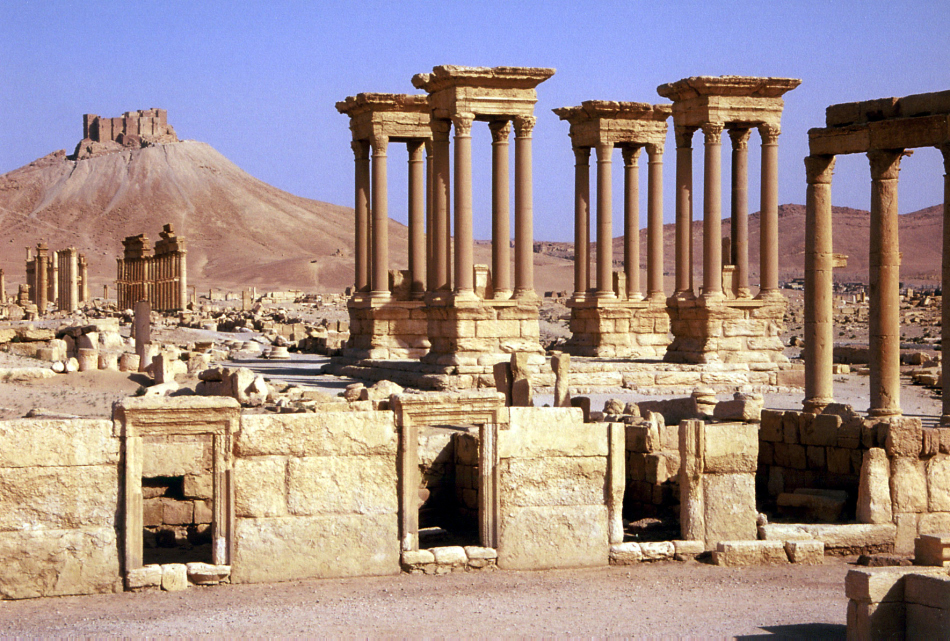 Outside of the Senate Building stood the Tetrapylon.  Further down the Great Colonnade, the 13th century citadel overlooked the entire ancient city from a distance.

Palmyra contains all kinds of components of ancient Roman architecture.

Exquisitely carved portico could still be visible at a number of buildings.

Tetrapylon is a type of Roman monument built on a crossroads.  The Palmyra Tetrapylon was once the icon of the ancient city.

Unfortunately, during the second ISIS occupation in 2017, out of the four groups of pillars two were completely destroyed and the other two severely damaged. 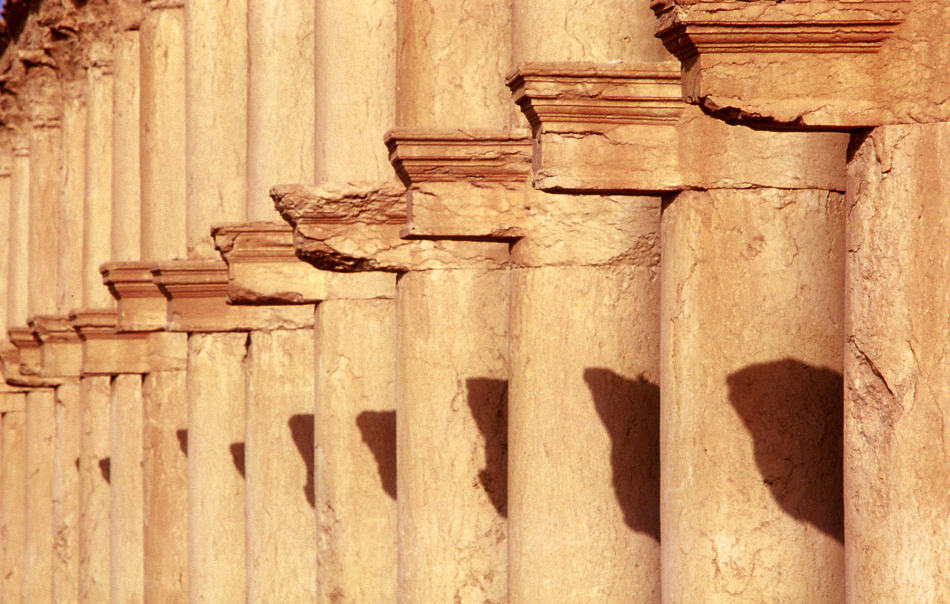 The 1.1km Great Colonnade is also another iconic feature of Palmyra.

Named by UNESCO as one of the Palmyra’s most complete structure in 1980, the Temple of Baalshamin was blown up by detonating a large quantity of explosives inside the temple by the ISIS in August 2015.

The Roman Arch of Septimius Severus or the Monumental Arch was also destroyed by ISIS with dynamite in October 2015. 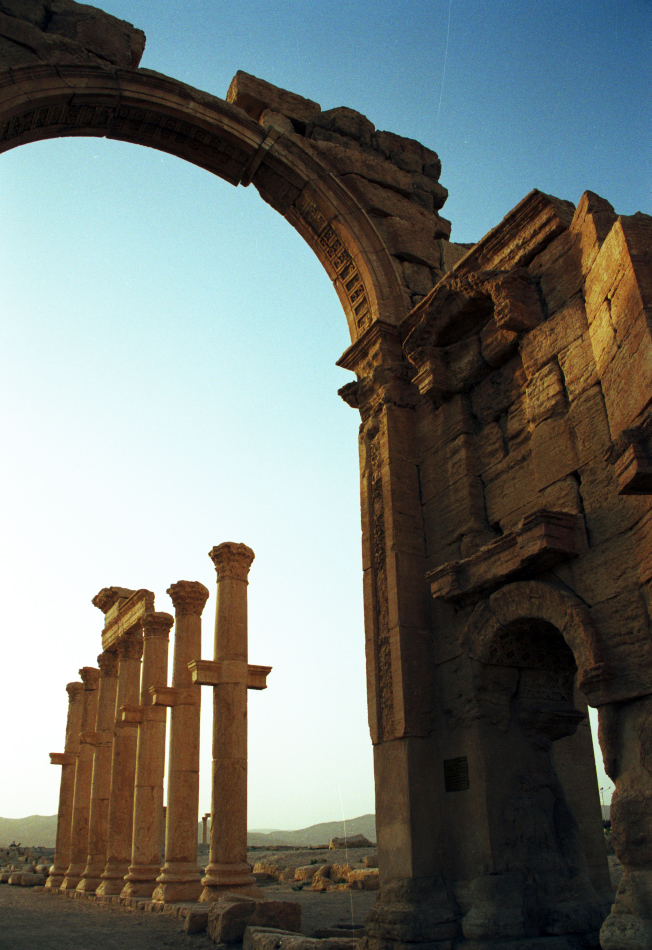 After the Syrian government recaptured the city, plans were made to restore the Monumental Arch.

Based on a 3D model from Oxford University, a 6.1m replica of the arch was carved in Italy and temporarily installed in London’s Trafalgar Square, then New York, Geneva, Washington DC, Dubai, and finally back to Syria to commemorate its existence before its brutal destruction. 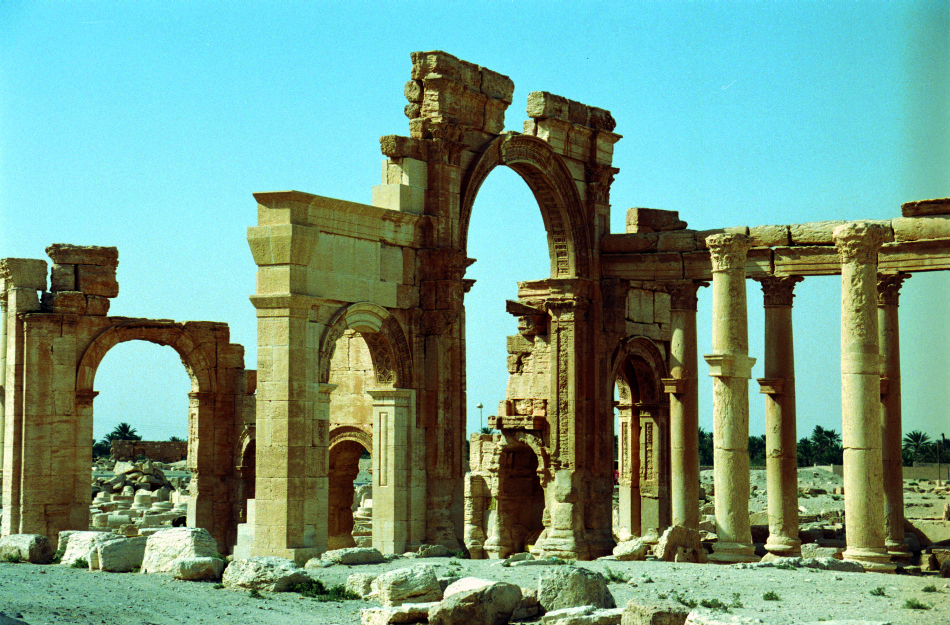 Built in the 3rd century, the ruined Monumental Arch was restored in the 1930s and soon became one of the main highlights for the visit of Palmyra.