After reunited with my two travel buddies in Cairo, our homeward odyssey official began. From Cairo, we flew to Athens, then to Zurich, before crossing the Atlantic back to Canada. In Greece, our plan was to spend a few hours to visit the Acropolis, had supper, and took a bit of rest before heading out to the airport. We expected to see some crowds at the world famous Acropolis, but watching hundreds if not thousands of cruise ship tourists wearing the same cap marching up the citadel hill right below us was still a shock. Despite the crowds, seeing one of the most recognizable icons of Western civilization was definitely an impressive experience.

The Acropolis is home to some of the most recognizable Classical Greek structures: the Parthenon, Propylaea, Erechtheion, Temple of Athena Nike, etc. Most of the Acropolis was constructed under Pericles during the golden age of Athens in the 5th century BC, the century that saw Athen’s victory against the Persians. The Acropolis was a magnificent collaborative work by architects including Iktinos, Kallikrates, and Mnesikles, and sculptors such as Pheidias, Alkamenes, and Agorakritos. This iconic hill was also the birthplace of democracy, philosophy, and theatre art of the Western world.

After seeing the Classical ruins, we headed down the northern slope to the Plaka quarter, a colourful and lovely neighbourhood full of lively restaurants, souvenir shops, and eye catching street art. In the evening, we picked a cosy restaurant for dinner. With English menus in hand, we ordered our dishes and I chose sirloin steak. The server tried his best to match our selections from his Greek menu. Somehow my sirloin steak was lost in translation and I ended up getting a whole grilled squid. It was a pleasant surprise and I had zero intention to swap it back to beef. The Mediterranean squid was fresh and delicious, and lived long in my memory. If it was a typical steak dinner, I would definitely not remember a single thing from that particular meal after all these years.

Deep in the Syria Desert stood one of the most splendid cities in the ancient world.  Due to its strategic location on the Silk Road with Persia, India and China on one side, and the Roman and Greek world on the other, Palmyra was a significant cultural and economic hub in the Hellenistic and Roman periods.  In 273 AD, Palmyra was razed to the ground by the Romans, and had never fully recovered since then.  The archaeological wealth from the ancient city was Syria’s most prominent tourist attraction and UNESCO’s World Heritage site.  Palmyra faced its biggest nightmare in May 2015, when the ISIS launched a huge offensive attack to capture the desert oasis.  Between mid 2015 to March 2016, Palmyra was controlled under the notorious terrorists when precious treasures and artefacts were looted or destroyed.  The Temple of Bel, Temple of Baalshamin, seven Tomb Towers including the Tower of Elahbel, and the Monumental Arch were blown up to pieces.  Uncounted artefacts were looted and smuggled into the black market.  Archaeologists were beheaded.  Before they were forced out by the government army, ISIS planted thousands of landmines and bombs in the ruined city.  On 15th April, 2020, two children were killed by a landmine in Palmyra, four years after the ISIS was driven out.  Despite the de-mining effort since 2016, Palmyra remains a dangerous place to visit and an endangered World Heritage site seven years in a row.  Memories of our 2006 visit seems so far far away:

At around 14:30 we finally arrived at Palmyra, the ancient desert metropolis since the times of Alexander the Great.  We checked in at Citadel Hotel.  The hotel staff arranged a car for our visit to the funeral towers.  The staff asked if we wanted to hire a car to visit the tomb towers.  At the village museum we bought the admission tickets for the tomb towers, and sardined ourselves (6 of us) in the little red car for the journey.

Our hired guide from the museum waited for us at the entrance of the Tower of Elahbel.  He told us some history of the towers, unlocked the door of Tower of Elahbel and led us in.  Many tomb towers in the valley were badly damaged by earthquakes throughout the centuries. The Tower of Elahbel was an exception.  Inside we could see the slots on the walls where coffins were once placed.  We walked up to the third level, saw a number of sculpted busts of the deceased, and the beautiful fresco of stars and constellations on the ceiling.  After, we visited an underground tomb with well preserved frescoes.  I was able to recognize scenes of the Trojan War with Achilles and Odysseus from one of the wall paintings.

After the necropolis, we moved on to visit the Temple of Bel.  It was the largest building in Palmyra, and one of the largest temples in the Classical world.  Bel was the main god of Babylon.  The temple was erected in the first century, with influences from Classical Greece and Rome, Ptolemaic Egypt, and ancient Syria.  We walked through the main gate into a huge courtyard that was once surrounded by Corinthian colonnades. At the centre stands the ruined Sanctuary of Bel, where we could admire the exquisite relief carving of the ruined building.

Tomb towers at Palmyra are unique examples of Classical necropolis.  Some tower tombs dated back to the Hellenistic period.  Most were found in the Valley of the Tombs below Umm al-Bilqis Hill. 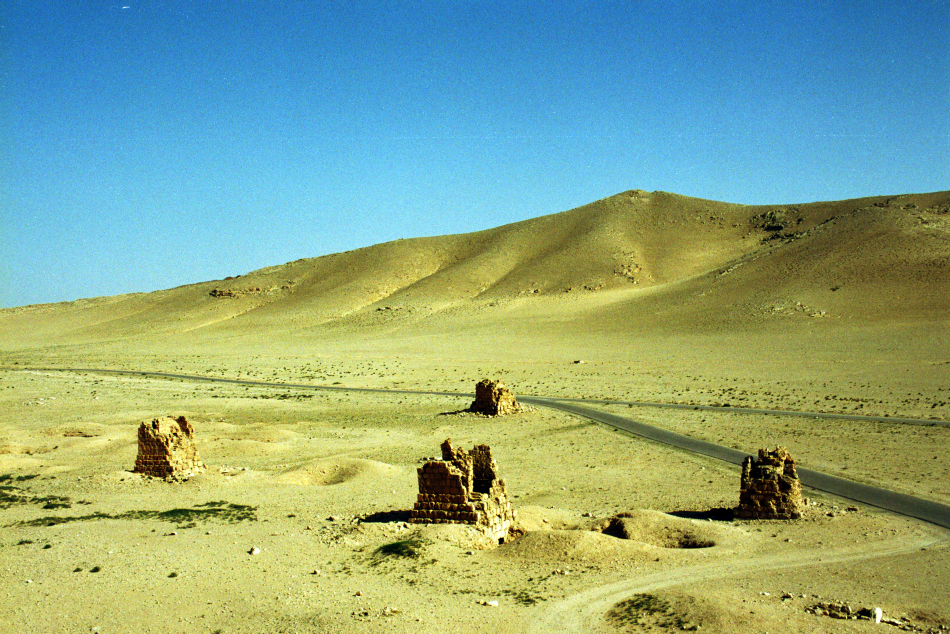 Inside the towers, dead bodies were placed on landings and stacked stone shelves, marked with a sculptural bust.

Before its brutal destruction in August 2015 by the ISIS, the Tower of Elahbel was a great place to learn about funeral architecture of Palmyra.  Inside the tower there was a narrow staircase reaching the upper floors.

Some of the larger towers could hold up to 400 corpses.  Chinese silk yarns dated to 1st century AD were discovered in the tomb towers, revealing the evidence of Silk Road trading two thousand years ago. 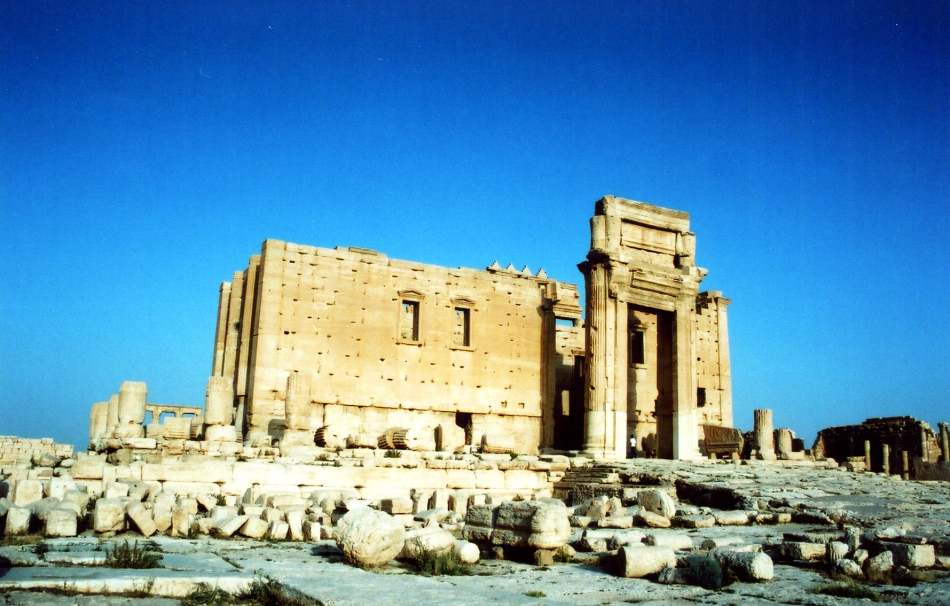 Most of the Temple of Bel has been blown up by the ISIS.  Now it has become a large pile of rubble.

Magnificent carving of the temple are probably gone even if archaeologists can restore the general structure of the building.

Walking around the enormous temple complex was a great pleasure.

Ceiling details were particularly well preserved at the Temple of Bel.

Beautiful relief and rows of Corinthian columns once stood in the temple courtyard.

Some of the relief carving of the central sanctuary were on display in the temple courtyard.

Handsome Classical columns stood proudly in the courtyard before the destruction.

Our guide gave us a little talk on the temple’s history at the courtyard. 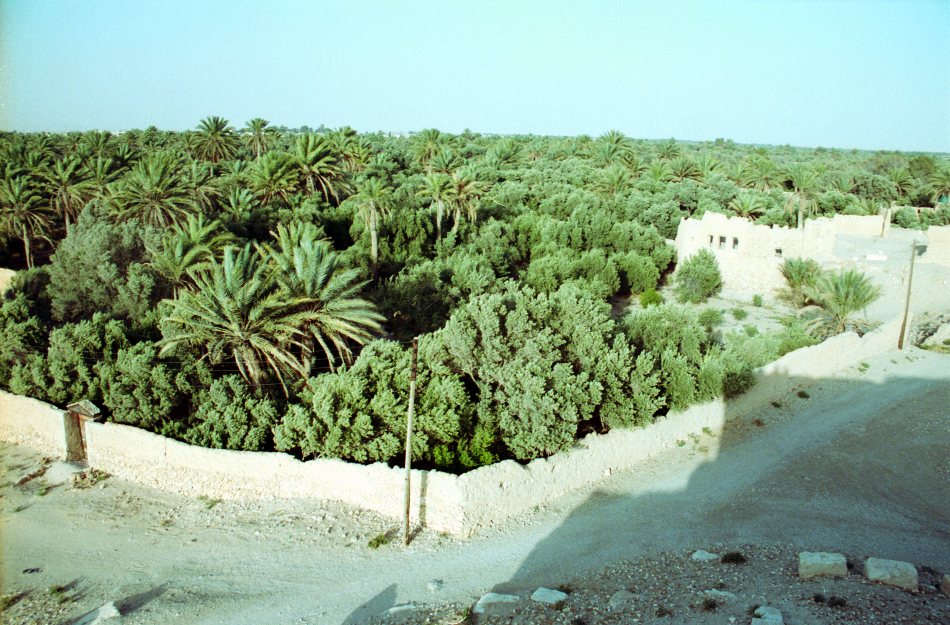 Outside the temple walls, we could see the palm trees east of the ruined city.

Along with sone other destroyed buildings, the government is planning to restore the Temple of Bel using original materials from the existing debris.

At last, our little red car drove us up to the citadel behind the ruins of Palmyra, where we could watch the sunset.  The citadel also suffered major destruction by the ISIS.

Up at the citadel we could fully appreciate the scale of the barren landscape in all directions.

The Temple of Bel, the enormous walled complex east of the Great Colonnade of Palmyra, was almost completely destroyed by the ISIS.  As satellite images showed, there was hardly anything standing at the Temple of Bel. 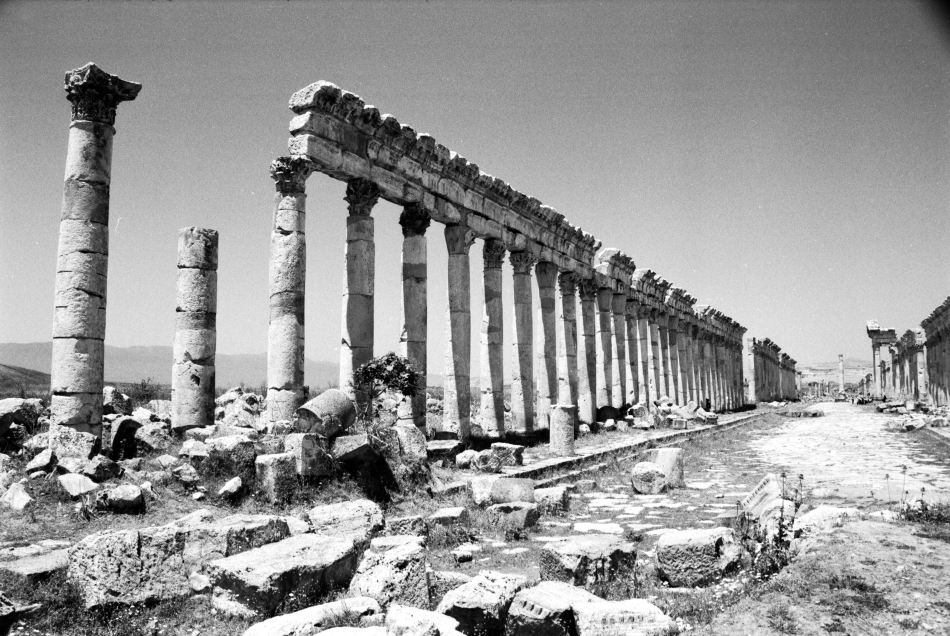 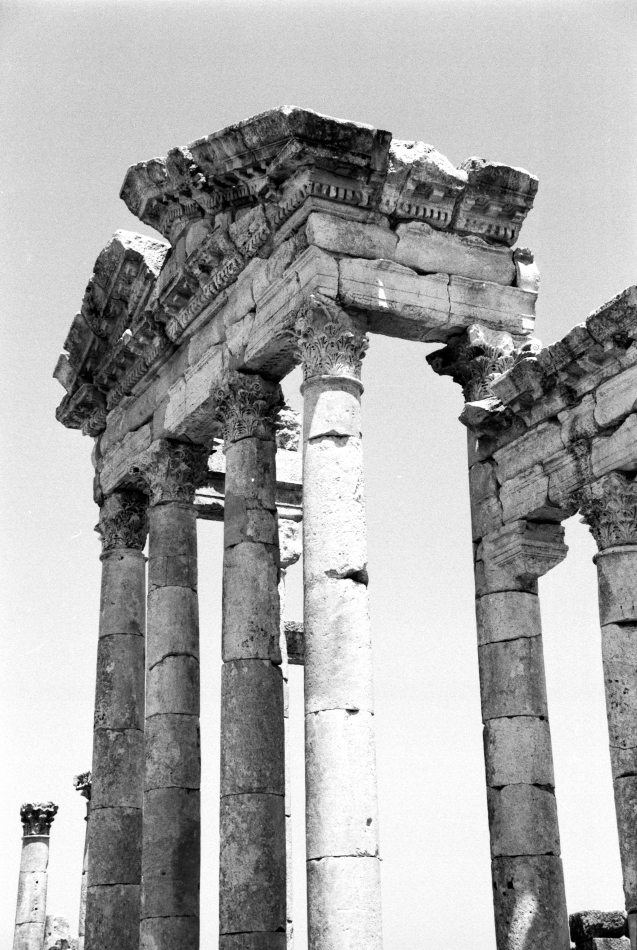