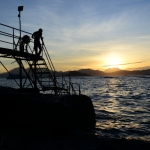 I first learnt about the swimming sheds from my father, who used to explore the waters of Sai Wan (西環) at the westernmost area of Hong Kong Island in his childhood. Back in 1950’s and 1960’s, sea swimming was not necessary a half day journey to a beach far away from the city. Hongkongers could instead hop to one of the ten or dozen of swimming sheds along Victoria Harbour after work for a quick dip in the sea. This swimming culture originates in 1911, when the first swimming shed was built at Tsat Tsz Mui (七姊妹) in North Point. It became a hit and soon expanded to seven sheds in the area. Taking the tram to the swimming sheds was the most popular pastime back then. A newspaper in 1929 estimated that each day there were about 5000 swimmers visiting the swimming sheds. These sheds were constructed of bamboo and timber, housing changing rooms, lockers and showers facilities, and a series of decks on stilts to enter the water. At its peak, some big establishments even had eateries, boat rentals, and arena for roller-skates. Back then, limited transportation options kept many Hongkongers away from more faraway beaches, while the water of Victoria Harbour was still relatively clean.

As beach facilities and public swimming pools became more accessible to common people, the degraded water quality of the Harbour, and most important of all, land reclamation and waterfront redevelopment projects have basically nailed the coffin for all swimming sheds in 1970’s.
In 1988, Chung Sing Swimming Shed (鐘聲泳棚) reopened at the western end of Kennedy Town, where lush green Mount Davis slopes down to the sea. This remnant from the past, with about 20 members, has become the last operating swimming shed in Hong Kong. The membership of the swimming shed is far from its heyday decades ago. But the relatively secluded Chung Sing Swimming Shed, which commonly known as Sai Wan Swimming Shed (西環泳棚) nowadays, has been offered a second life. Photos of the lovely sunset over tranquil water at Sai Wan Swimming Shed has become an Instagram sensation in the recent decade.

Named after the ship captained by Fitz Roy who took Charles Darwin on board to study natural science around the globe, Beagle Channel was one of the three sail routes where ships could go between the Atlantic and Pacific before the opening of Panama Canal.  The Beagle channel is narrow, but the water is crystal clear and full of marine wildlife.  Doing a cruise in the Beagle Channel is a mandatory activity for all visitors to Ushuaia. There are many tour companies in town offering various boat rides up the Beagle Channel.
After the seafood lunch at Chiko, we took a boat tour with Tres Marias.  With only 10 people on board, touring the Beagle Channel on a sailboat is a unique experience unlike most of the other cruise boats that can take dozens or even over a hundred of passengers at a time.  While most boats would take tourists to see the sea lions and sea birds from afar, and reach as far as the Lighthouse Les Eclaireurs, we chose Tres Marias because it allowed passengers to physically land on Isla “H”, a small island in the channel within the Isla Bridges natural reserve.
The sea was calm today.  After leaving our bags in the cabin, we climbed up to the deck and sat under the boom.  The trip to Isla H took about an hour.  After we arrived, we got about an hour to hike around the island with our guide.  The island is largely covered with small plants that can survive the harsh Fuegian winds.  On a stone beach, we passed by a shell mound left by the former canoe people, the nomadic Yamana. There were also various types of seaweed and seashells all over.  On the high point of the island, our guide led us to a colony of rock cormorants nesting on the cliff.
After Isla H, Tres Marias took us to a colony of sea lions on a small island.  Waves were higher on our way back with water splashing onto the deck every so often.  Since we were sitting at the front of the boat, we both got soaking wet as if exposed to a cold shower.  Overall it was a pleasant experience to sail in the Beagle Channel.  It was cold, wet, but the scenery and the wildlife made it worthwhile. 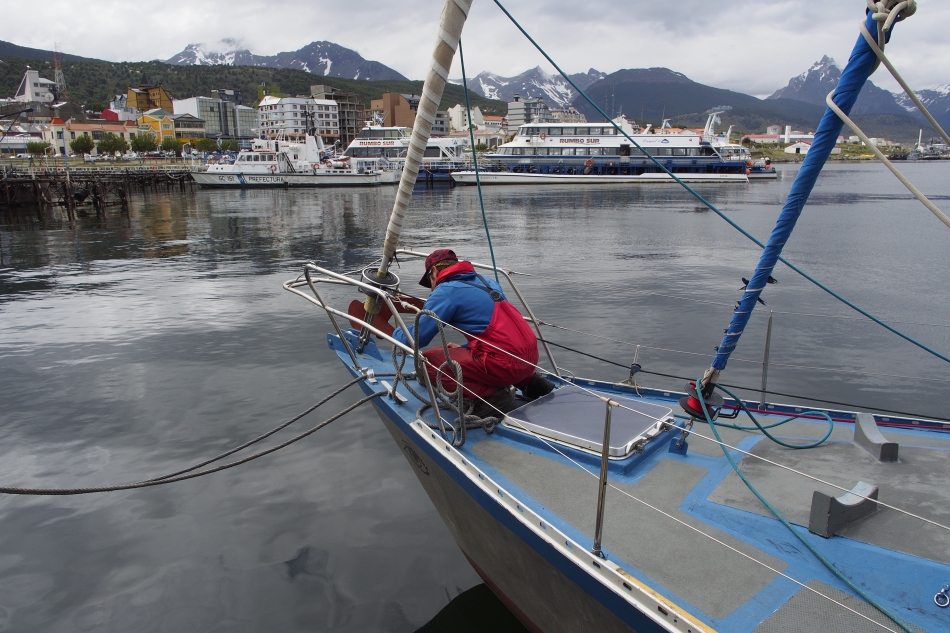 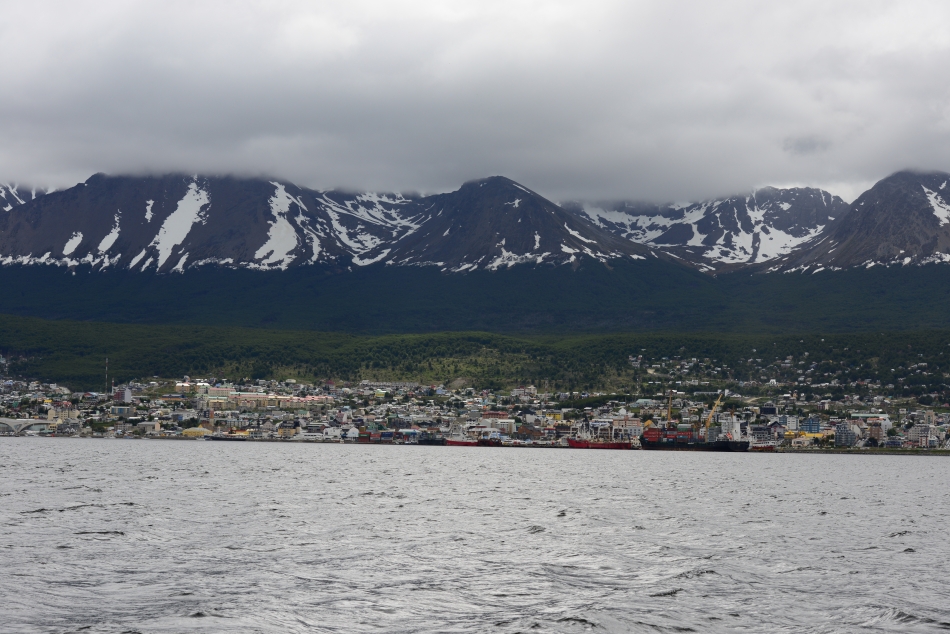 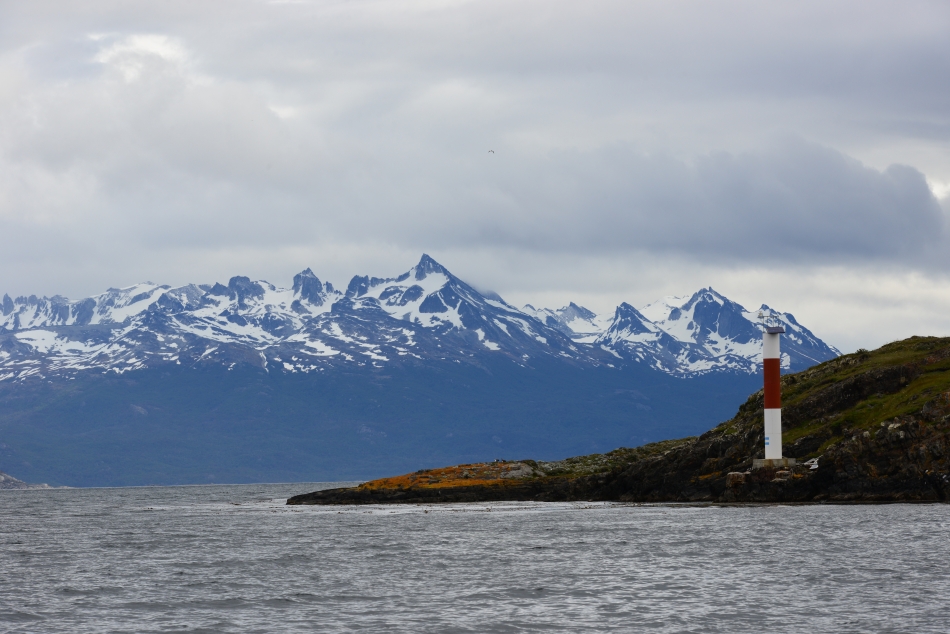 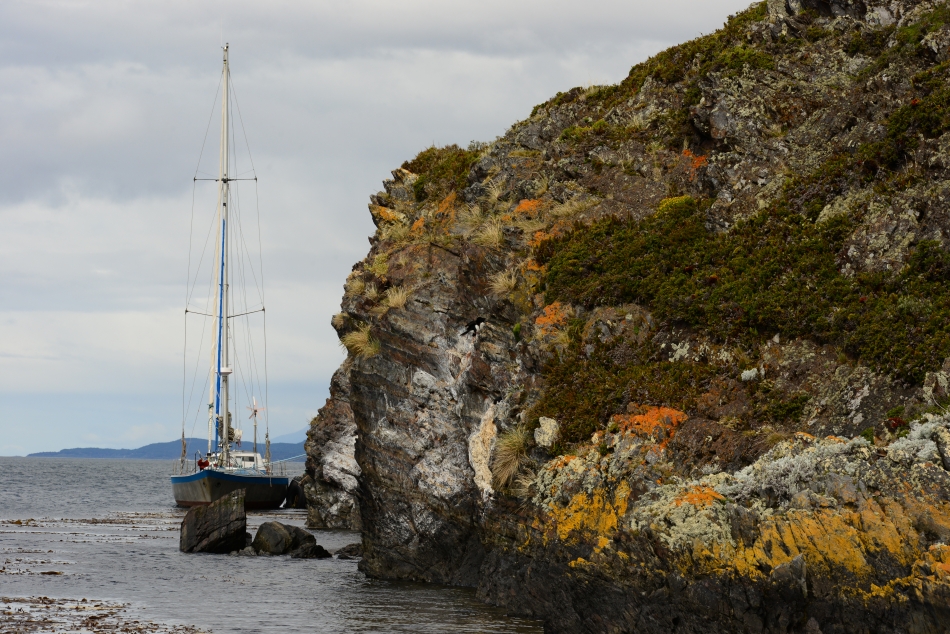 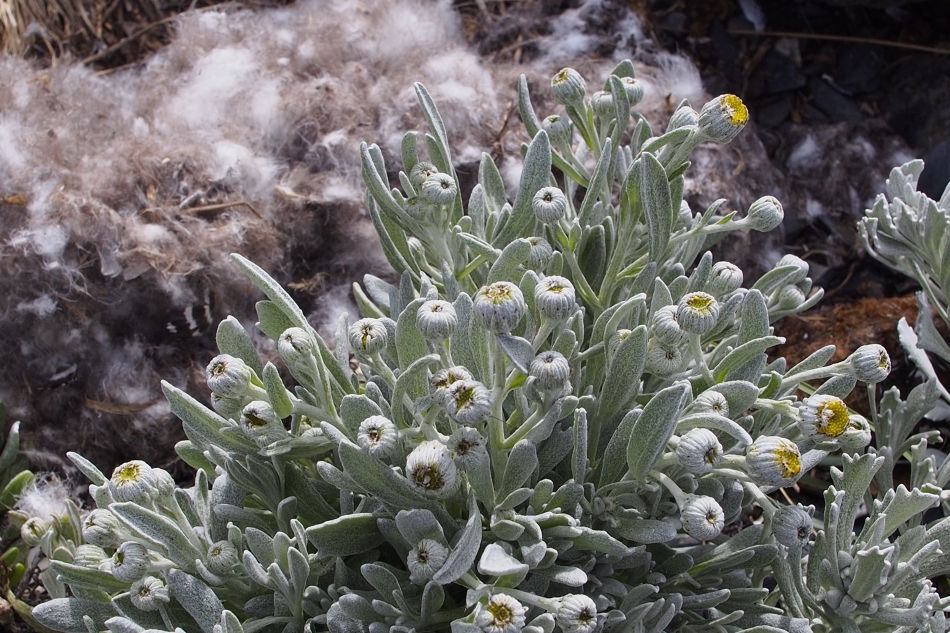 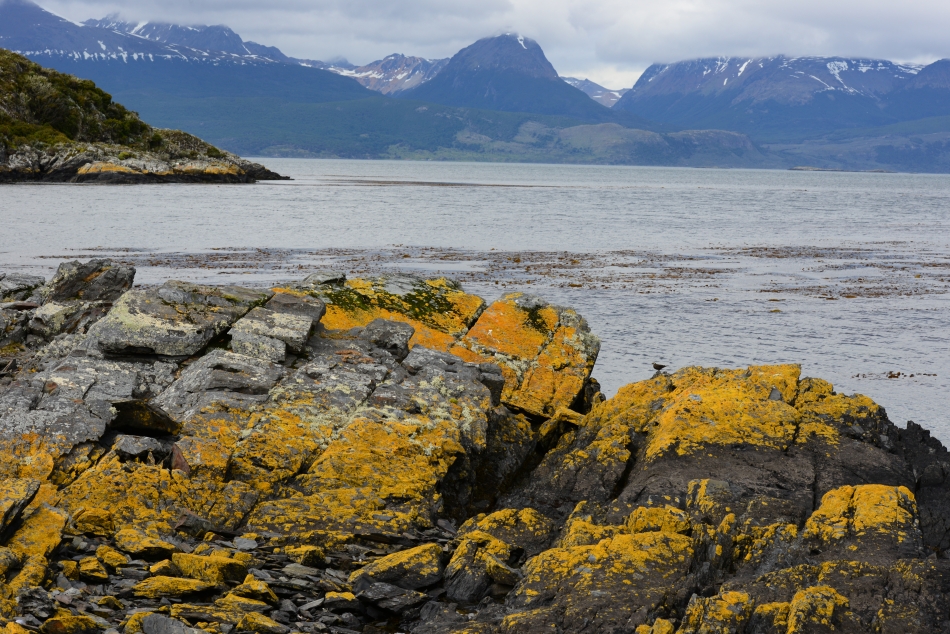 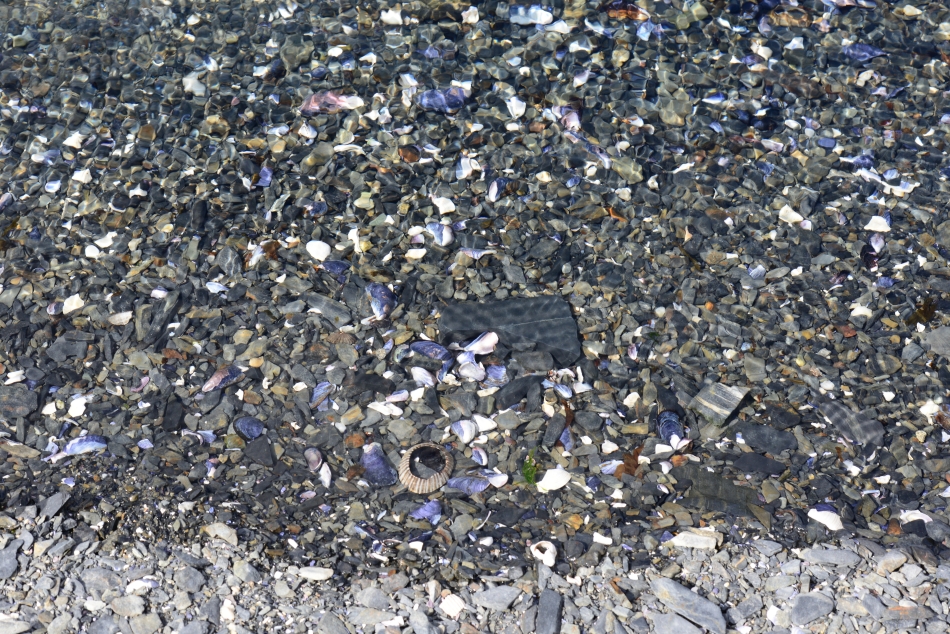 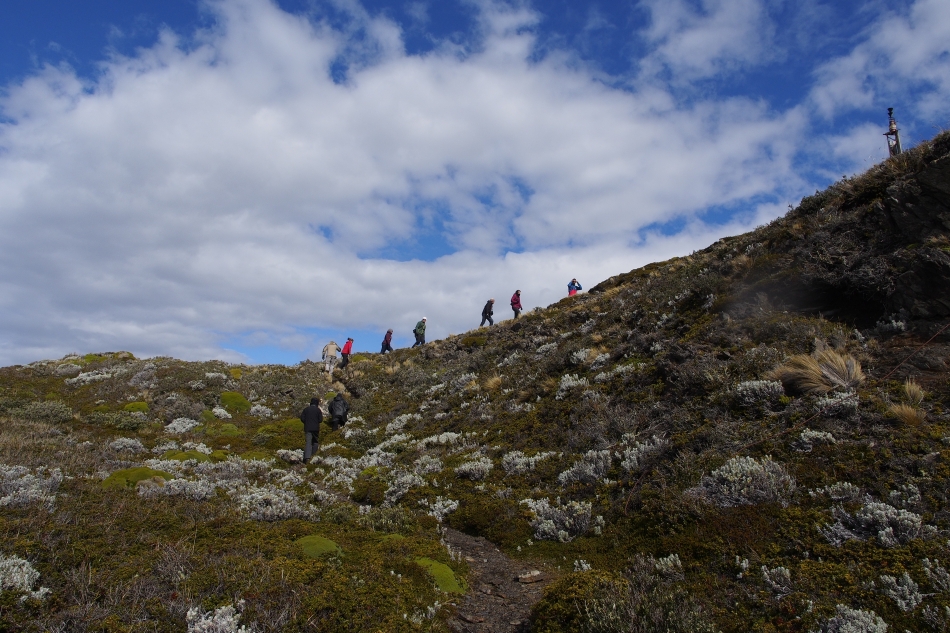 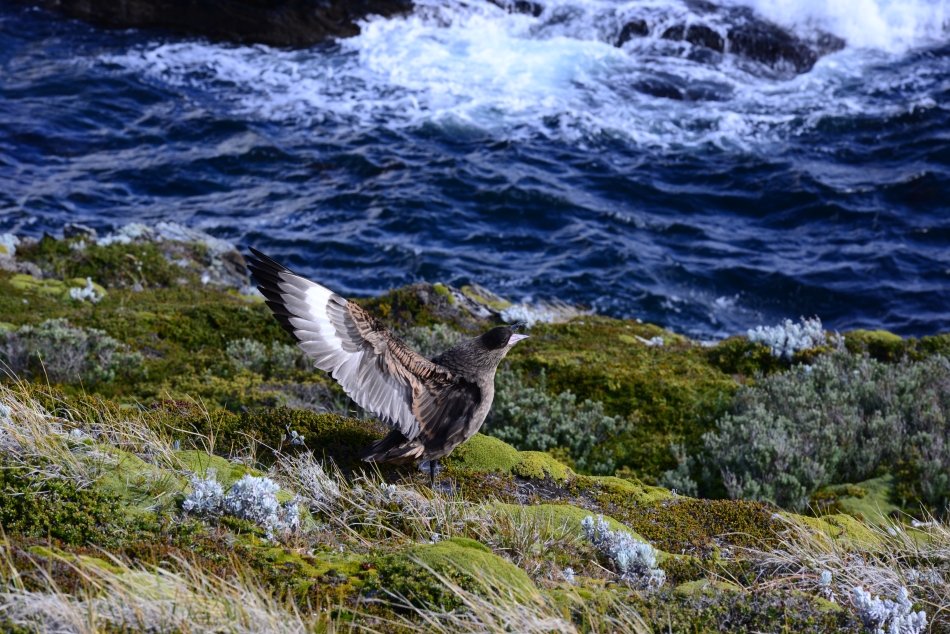 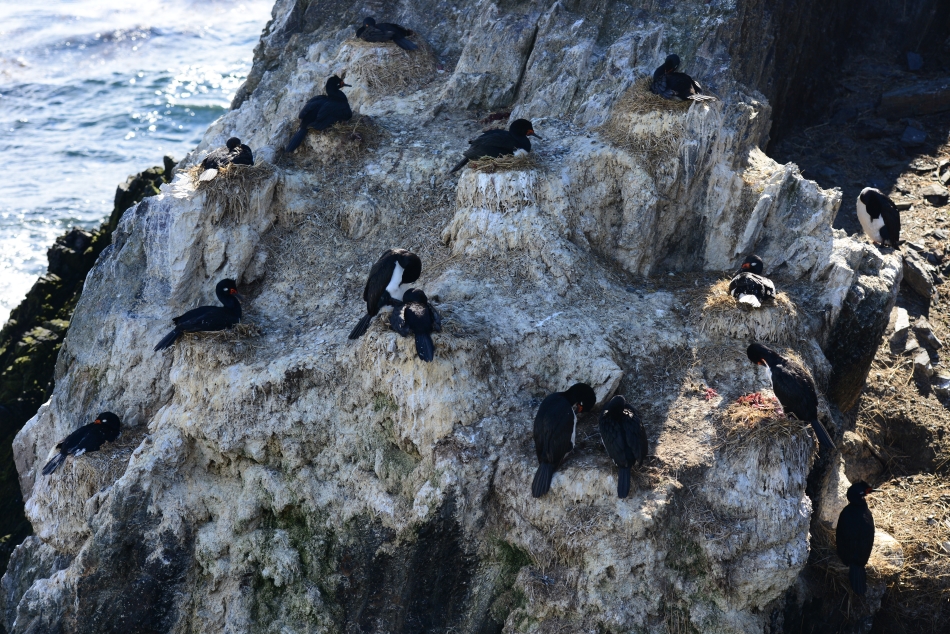 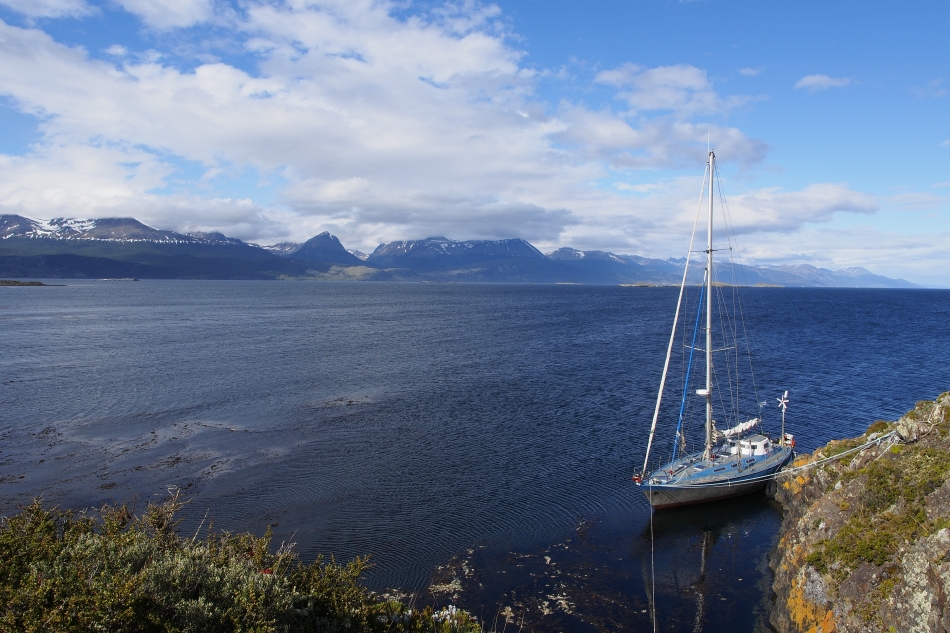 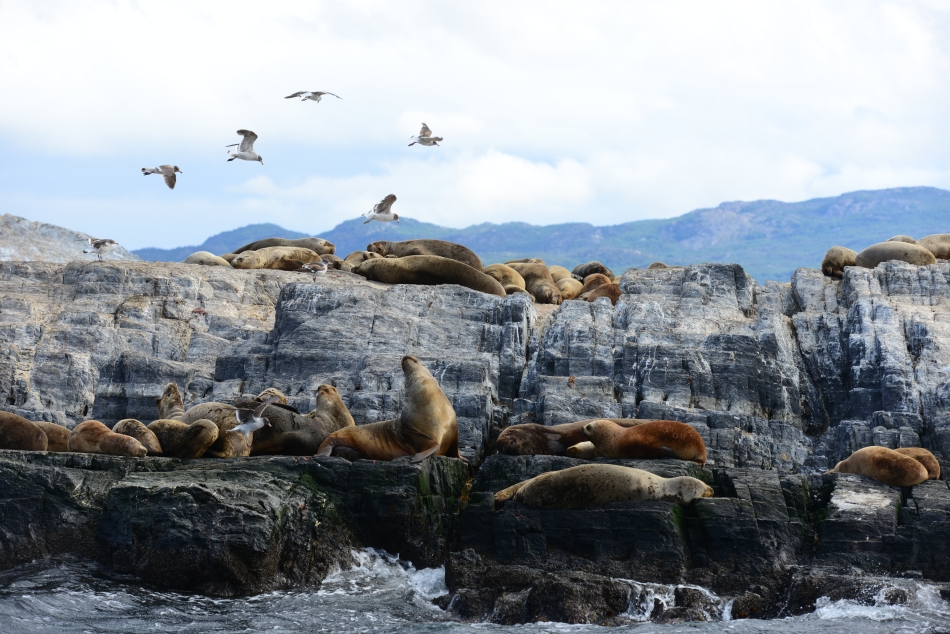 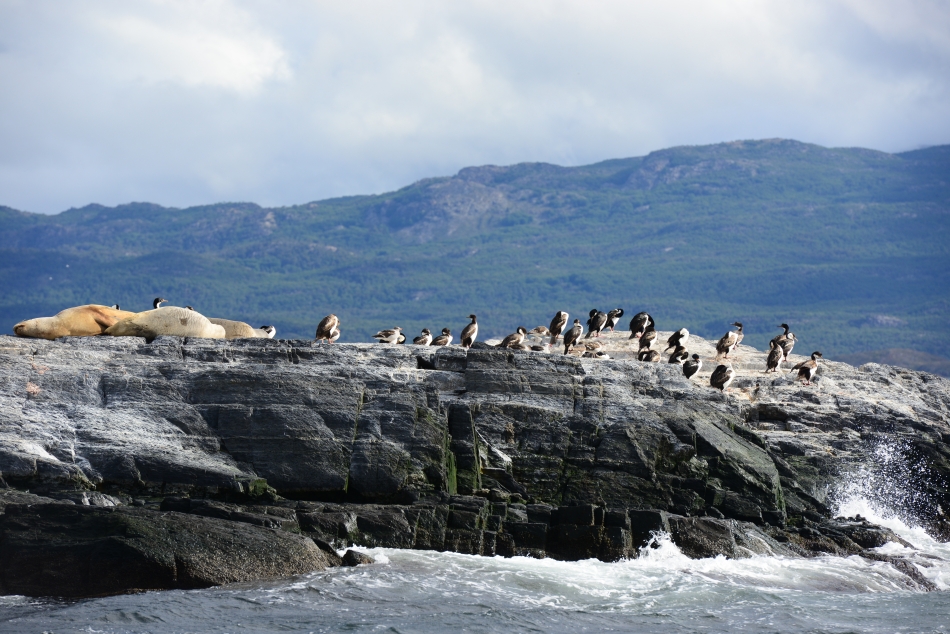