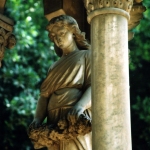 At around 42 AD, Saint Mark introduced Christianity into Egypt and found the Church of Alexandria, one of the five apostolic sees of early Christianity in the Roman Empire (Church of Rome, Constantinople, Alexandria, Antioch and Jerusalem ). By the 3rd century, Christianity had became the most popular religion in Egypt. The local language used to translate the earliest scripture was Coptic, and the Copts are one of the most ancient Christian communities in the Middle East. As Islam and the Arabic language entered Egypt in the 7th century, the significance of the Coptic language declined. Coptic Orthodox Christianity, on the other hand, continues to evolve and has became the main stream Christianity in Egypt. It is also believed that many practices of early Christians had been preserved by the Coptic Church. Today, it is estimated that Copts account for 5 to 20% of the Egyptian population.

In the 12 century, the seat of the Church of Alexandria was relocated to Coptic Cairo, the area believed to be visited by the Holy family when Jesus was a child. Today, Coptic Quarter is included in Old Cairo, the historical area of the Egyptian capital that has been inscribed in the UNESCO World Heritage list since 1979. Like many tourists, we took the metro to the Coptic Quarter on our second day in Cairo. We visited the St George Church, Synagogue of Ben Ezra, Church of Abu Serga, and the Hanging Church. We also toured the Coptic Cemetery. Every tomb in the Coptic Cemetery is like a small shrine on its own.