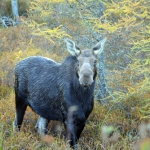 The sky was grey and the air was moist when we first hiked the Mizzy Lake Trail in 2007.  After seeing a wild turkey dashing across our path, we followed the trail to an open area surrounded by spruce bogs. The trail cut right through the bogs, with peaceful ponds lying along both sides. It was 7:30 in the morning and we were all by ourselves. Soon we discovered footprints on the muddy path, some probably belonged to a fox, and some were hoof prints of a much larger animal.  We continued to walk forward until we saw a dozen or so bare spruce trunks sticking out from the water.  Reflection of their white trunks stood against the grey clouds in the tranquil water was occasionally disrupted by touches of water insects.  Somehow the imagery touched us like a gentle poem.  We looked at the scenery for a while and took some photos.  As we turned our head back onto the trail, we immediately spotted something tall standing ahead.  It had its back towards us, but soon it turned its head and looked right into our eyes.  It was a tall cow moose, our first ever sighting of a moose.  It stared at us for half a minute, then walked slowly down to the spruce bog on the left, crossed the water to the opposite shore, and disappeared into the spruce forest beyond.  Moose, the largest animal in the deer family, is popular for wildlife sighting in North America.  The English name “moose” is a word borrowed from the Algonquian language back in the 17th century.   Spreading their two large toes to keep them from sinking, moose has adapted well living in the environment of spruce bogs, where they can walk on the peat filled marshland to feed on aquatic plants.

We saw beavers several times in Algonquin.  Sometimes with sticks in their mouth, sometimes without, always in quick motion swimming across the water.  But more often, we saw traces of their existence: pointed tree stumps, trunks with bite marks, mud and timber dams, and mounts of timber sticks in the pond.  Back in the 17th century, when a large area of North America was owned by the Hudson Bay Company, beaver fur was one of the major exports from the New World.  Nowadays, beaver has become a national emblem for Canada, appearing on the symbol and coat of arms of many organizations, companies and government departments, from Toronto Police to Canadian Pacific Railway, and has officially designated as the national animal in 1975.  In Algonquin, beavers are probably the only animals other than humans that know how to alter a natural environment to create their desirable home.  As the second largest rodent, beavers use their large teeth to harvest timber.  Along with stones and mud, beavers use the timber to construct dams to alter stream flow in order to create wetlands known as the beaver ponds.  A peaceful beaver pond contains water warmer than running streams, an ideal habitat for many wetland plants, frogs and fish.  It also serves as a moat for the beaver lodge to prevent wolves and other predators.  The longest beaver dam in record exists in Alberta, reaching up to 850m in length.

Spruce bogs and beaver ponds are two of the five major habitats found in the Algonquin Park.  The other three includes the coniferous forest, deciduous forest, and rivers and lakes.  Spruce bog is a type of wetland common in the north.  Its water is quite acidic and full of floating vegetation that slowly accumulates into a thick layer of peat.  Many birds frequent the bog,  and so as moose which come to feed and drink.   Beaver pond, on the other hand, belongs to the story of beavers continuously transforming the natural environment by building dams and ponds, creating a wetland that benefits many species and also serves as a natural filtration and stormwater system for the area.  A pond may last until the death of a beaver, or until a fierce storm hits and damages the dam beyond repair.  By then, nature will restore the area back to its original conditions, until the arrival of the next beaver to restart the cycle all over again.

Moose sighting is popular on Highway 60, especially in early spring when the animals gather at the highway ditches to indulge  in a feast of road salt from melted snow.

Rivers and lakes represent another major habitat in the park.

Reflection of autumn foliage in a beaver pond.

A small beaver dam made of timber, rocks and mud is a highlight at the Beaver Pond Trail.

Many species, such as some waterlilies, frogs and birds, thrive in the ecosystem of a beaver pond.

Spruce bog is the other major habitat at Algonquin.

Life and death of spruce trees mark the boundary of a spruce bog.

Reflection of spruce forest in the bog water.

Remnants of once a thriving spruce grove at the spruce bog near our moose sighting location in late afternoon (Third visit of Mizzy Lake Trail in 2012).

Young moose shook off water after crossing a small stream (Third visit of Mizzy Lake Trail in 2012).  That afternoon, we joked with each other and placed our bet on whether we would have the same moose encounter that we had five years ago. We waited patiently and dusk was approaching. When we were about to leave, we spotted this young moose. It was truly a magical moment for both of us.

Young moose gazed upon us curiously (Third visit of Mizzy Lake Trail in 2012)..

This curious young moose walked from the wetland onto the trail. It seemed to be interested in us as it was slowly walking towards us.  The cow moose that we encountered five years earlier at the same spot reacted differently. It walked away from us into forest after it made an eye contact with us.    (Third visit of Mizzy Lake Trail in 2012).

Bull and cow moose kept their eyes on the young moose while the young moose fixed its eyes upon us. We have vivid memory of each encounter with moose at Algonquin Park. The encounter becomes special and personal as each time there were only the moose and us. Every time, when we spotted the animal, we would keep our voice low and keep a distance from them as we didn’t want to disrupt or irritate them.  (Third visit of Mizzy Lake Trail in 2012).

After we had some good moments of moose encounter, we got to rush out of the Mizzy Lake Trail before dusk fell. We walked so fast that we were like racing with the sun. We’ll keep this peaceful image of Algonquin Park with us in mind no matter where we go.

From now on, not only will we continue to write about our current travel experiences, we are also going to revisit some of our past adventures and share them on the blog.  We hope that Blue Lapis Road will become a more comprehensive collection of our magnificent moments in life, at which we opened our hearts to see, listen and feel the world around us.  Before winter creeps in, we grew a little nostalgic here and decided to write about the Algonquin Provincial Park in Canada, a place that we frequented a few years ago for its vivid autumn colours, pristine bog scenery, elusive wildlife, and the sense of escape from busy urban life.

Located about 300km north of Toronto and 260km west of Ottawa, Algonquin has long been a tourist destination in the Province of Ontario since late 19th century.  Today, visitors go to Algonquin for all kinds of outdoor activities, including canoeing, camping, fishing, hiking, cross-country skiing, wildlife watching, horseback riding, mountain biking, etc.  Established as a provincial park since 1893, Algonquin has remained as a 7,600+ sq.km natural paradise in a transitional zone between northern coniferous and southern deciduous forests.  With over 2,400 lakes and 1,200km of waterways, Algonquin is truly a splendid land of waters and forests.

At dawn, the vivid skies project crystal clear reflections in the cold and tranquil water of Algonquin.  The rising mist and silhouette of spruce forest mark the distant horizon, separating the sky and the peaceful water.  Waterlilies float in the water like tiny brush strokes of an oil painting.  The sound of water made by the sudden movement of frogs, fishes or beavers occasionally break the silence.  As the sun rises, the vivid colour palette of the Canadian landscape emerges while the frost on timber boardwalk slowly disappears.  The haunting beauty of Algonquin’s misty landscape is so powerful that it lured us to get up early in the morning and ventured out there in freezing temperature with our cameras every time we visited the park.  The same dramatic scenery has touched the heart of many visitors, including famous painter Tom Thomson back in the 1910s, when he decided to move into the park to paint and lead a life of solitude after a few visits in 1912.  He resided in the park for five years and finished some of his most important works before drowning to death at Canoe Lake in Algonquin.

Spruce Bog, a wetland system with accumulating peat and decaying moss, is a common scene in Algonquin. 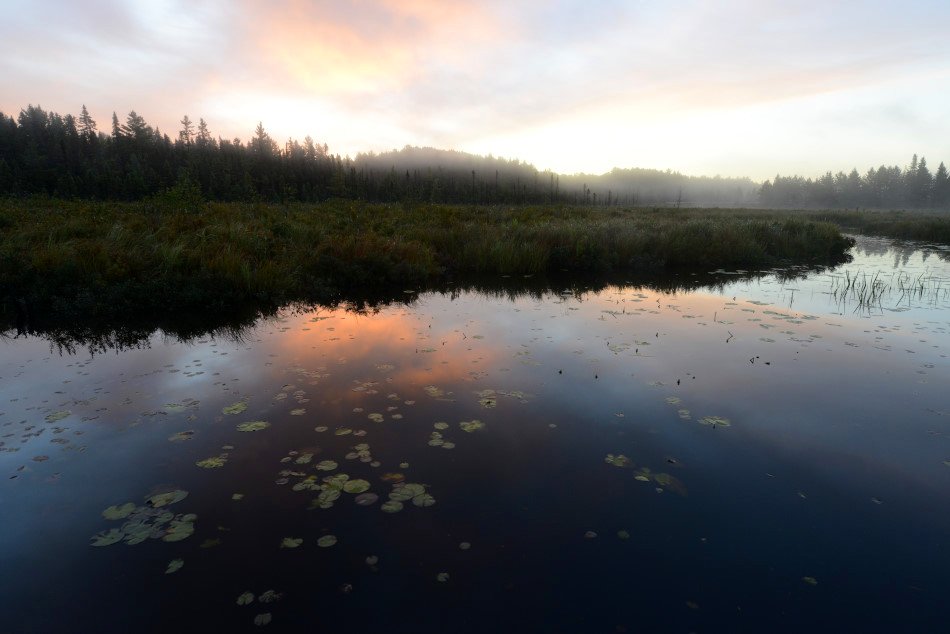 In many cases, spruce bog is submerged in water a few metres deep.

The Spruce Bog Boardwalk is a 1.5 km loop trail easily accessible from Hwy 60.

Mist rises from the mirror-like lake in early morning. 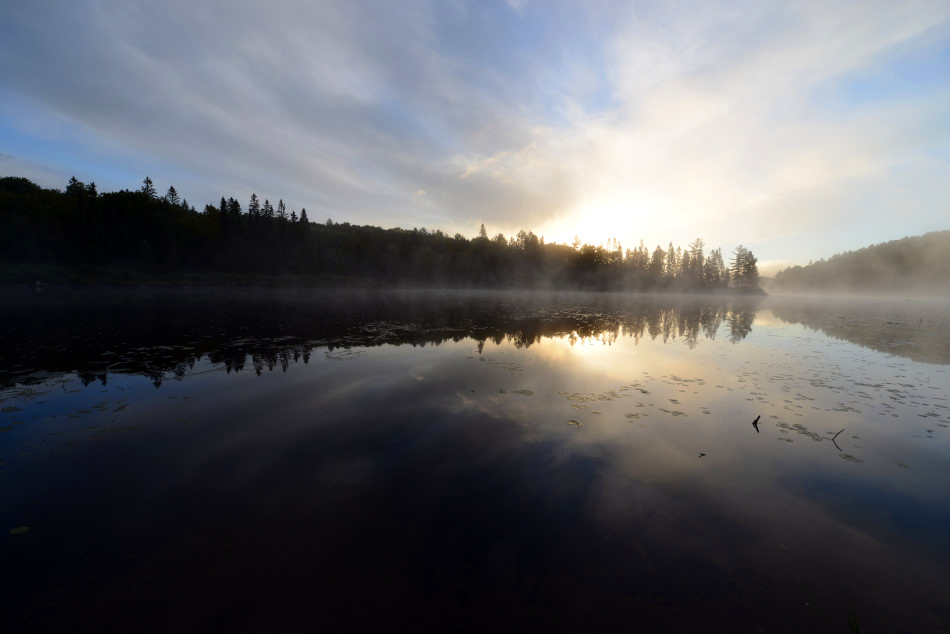 Much of the soil in Algonquin is saturated with water, allowing bogs and lakes to flourish.

When driving along Hwy 60, the misty spruce bogs appear as occasional openings between dense woodlands. 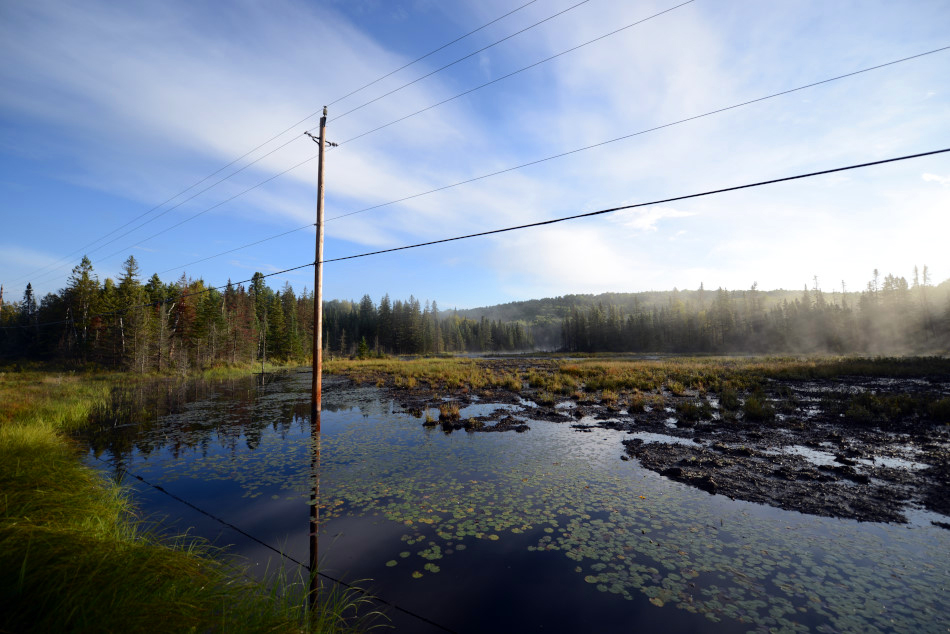 Perfect reflection of an utility pole in bog water. 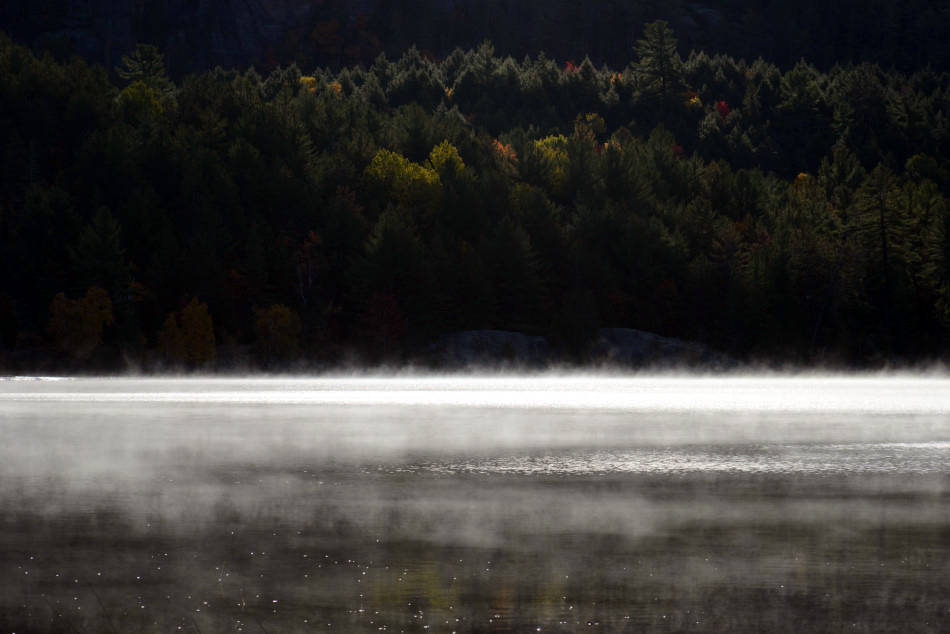 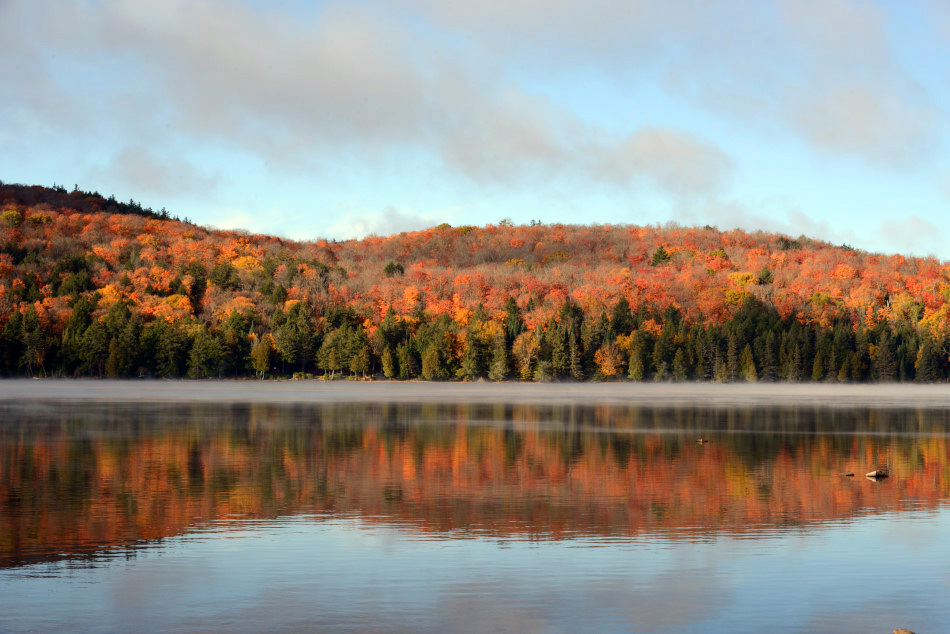 The peak moments for the fall colours are almost over.