No matter in Rome, Buenos Aires or Hong Kong, taking morning walks is always one of our most enjoyable ways to appreciate a city. With an ever-present tranquility, elegance and otherworldliness, Kyoto is perfect for a morning stroll, especially to appreciate the beautiful tones of aged timber, indigo shingles and seasonal vegetation all under the crisp air of surrounding mountains. And what’s best to start a morning walk? For us, it’s a cup of good coffee. Tucked in a corner of an almost unnoticeable parking lot a block away from Nishiki Market (錦市場), a tiny coffee shop successfully captured our attention with its rich aroma and lovely ambience. Housed in an old machiya house, Weekenders Coffee provokes memories of a traditional kissaten (喫茶店) where writers and intellectuals in the old days gathered for a cup of tea or coffee. Opened since 2005, Weekenders was one of the first espresso shops in Kyoto. At Weekenders, a few customers may gather at the forecourt sipping coffee while resting the eyes upon a tiny Japanese garden. This was exactly what we did: sitting in front of the coffee shop at 7:30 in the morning, sniffing in fresh morning air and coffee aroma, and being enchanted with the pleasure of life.

At Nishiki Market, pickle vendors and fishmongers were busy setting up their stores. Laughter and giggles could be heard behind the counter of a tamagoyaki (Japanese rolled omelette) shop, where a team of staff were busy making omelettes for the day. It was still way too early to taste the food and shop for grocery at the iconic 400-year-old market. Unlike the crowded scenes during our 2016 visit, this time we almost had Nishiki all by ourselves. At the eastern end of where the market met Teramachi Shopping Street, we were once again attracted by the lanterns of Nishiki-Tenmangu Shrine (錦天満宮) just like in 2016. Headed north from the shrine, we entered the arcade of Teramachi Shopping Street (寺町通商店街), a famous destination for both locals and tourists.

Literally means “Temple Town Street”, Teramachi (寺町通) has much more to offer than a covered arcade both sides flanked by shops. In 1590, 80 or so Buddhist temples from the area were relocated to Teramachi. It was Toyotomi Hideyoshi (豊臣秀吉), the powerful daimyo (feudal lord) or de facto ruler of Japan, who ordered the move during Sengoku period (戦国時代) in the late 16th century. In the subsequent centuries, stores selling books, Buddhist rosaries, medicine, stationery, handicrafts and clothing flourished and gradually developed into the present arcades. Today, in the midst of shops, restaurants, and entertainment facilities, places of worship and even small graveyards maintain a strong presence at Teramachi, with temple entrances open right next to boutiques and stores. While most shops on Teramachi and the adjacent Shinkyogoku Shopping Street (新京極商店街) had yet opened for business, we took the opportunity to do some temple hopping while window shopping at the same time. 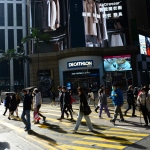 Six years before the handover of Hong Kong to China, Taiwanese songwriter and singer Lo Tayou (羅大佑) published a song called “Queen’s Road East” (皇后大道東) in 1991. Emerged as a satirical reflection of Hongkongers’ collective feelings in the eve’s of the handover, the song became an instant hit. Even today, the song still offers an interesting cultural reference to understand the city’s unsettling moment before 1997. In the face of Hong Kong’s social uncertainties and imminent changes in near future, lyricist Albert Leung (林夕) made use of a wide range of symbols in the song, from “portrait on the coin” and “noble friend” to signify Queen Elizabeth II, to “waves of pedestrians” to suggest the mass exodus of Hongkongers. But the biggest symbolism is in fact the name “Queen’s Road East” itself. Physically divided into three sections, namely Queen’s Road East, Queen’s Road Central, and Queen’s Road West, Queen’s Road was used in the song to symbolize the three main players in the city’s story: “East” for Hong Kong, “West” for Britain, and “Central” for China (in reference to “Middle Kingdom”, the Chinese name of China). While “Queen” is unmistakably a reference to the city’s colonial past, the historical and economic significance of Queen’s Road has suggested a meaning way beyond colonialism. It is in fact a symbol of the city’s success story. As Hong Kong’s first main road, Queen’s Road was home to the first city hall, first post office, first luxury hotel, first bank headquarters, first residences of government officials, first business district, etc. After almost 180 years of urban transformations, its importance in the commercial heart remains vital to this date. The rich history and symbolism of Queen’s Road has made it a sensible choice for Lo Tayou and Albert Leung in their iconic song, and a reference point to tell the story of Hong Kong.

For its architecture and luxury shops, Queen’s Road Central is indeed a popular destination for both foreign visitors and local Hongkongers. Constructed between 1841 and 1843, Queen’s Road was originally named Main Street (大馬路). It ran through the first business district in the city between Sai Ying Pun (西營盤) and Central (中環). The road was soon renamed as Queen’s Road in tribute to Queen Victoria. As the road further extended in the west and east direction, Queen’s Road was eventually divided into three main sections: West, Central and East. Connecting Sheung Wan (上環) and Central along the island’s original shoreline, Queen’s Road Central (皇后大道中) has long been considered as a synonym of Downtown Hong Kong. Subsequent land reclamations in the next 180 years pushed Queen’s Road Central further and further inland. The business district has long extended way beyond its original extent around Queen’s Road Central. Yet, buildings along the road continue to be sold, torn down and replaced by taller replacements, from the 19th century Neo-classical structures to the 20th century Modernist buildings, and then to the contemporary glassy skyscrapers. Due to its historical significance, Queen’s Road Central is probably one of the most documented street in Hong Kong. Having the historical photographs in hand while taking a brief tour of Queen’s Road Central offers a fruitful way to understand the tale of constant changes, and endless cycle of deconstruction and reconstruction in one of the fastest growing metropolises in modern history.