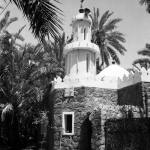 In the midst of the Great Sand Sea in the Western Desert 560km west of Cairo, Siwa Oasis is one of the most remote destinations and a town deepest in the mighty Sahara that tourists may reach in Egypt. Only 50km away from the Libyan border, Siwa lies in a natural depression about 19m below sea level. Occupied mostly by a group of Berber people who have developed their own culture and distinct dialect Siwi, Siwa Oasis is one of Egypt’s most isolated settlements. Until a tarmac road was built in 1984 to Marsa Matruh at the Mediterranean Coast, Siwa was only accessible by camels. Despite its remoteness, Siwa has long been a famous place in times of antiquity when a Greek oracle temple dedicated to the Egyptian sun god Amun was established in about 700 BC. In 331 BC, a celebrated conqueror from Macedon set sail from his newly founded Egyptian city by the Mediterranean Coast to Mersa Matruh, and then marched inland into the desert to reach the remote oracle. His visit has forever put Siwa on the map of history. This military genius is commonly known as Alexander the Great.

Home to spectacular landscapes, ancient ruins and distinct oasis culture, Siwa has been considered as an alternative destination in Egypt away from the popular Nile region and Red Sea resorts. For me, the simple idea of venturing out to the far end of the Western Desert in Egypt was tempting enough. Before the emergence of smartphones, Instagram and even Facebook, Siwa was not a well known tourist destination back in 2006. I learnt about Siwa Oasis from Lonely Planet guidebook. Given the anticipated impact of speedy globalization, I feared that the remote Oasis would turn into a resort town in a few years’ time. Thus I decided to pick Siwa as the last stop of my 2006 Middle East trip.

Watching sunset at Bagan Myanmar from the top of a pagoda has been one of the most popular activities for tourists.  However, according to our guide Win Thu due to recent accidental falls of some tourists, the government temporarily banned pagoda climbing during sunset.  Instead, Win Thu took us to one of the designated earth berm where we could still see dipping of the crimson sun over the plain of Buddhist stupas.

Leaving Ananda Temple behind, we moved on to a designated lookout in Old Bagan.

Obviously we were the first to arrive at the lookout.  It was nowhere close to as crowded as watching sunset atop the most popular viewing spots in Angkor of Cambodia, but it was not romantic and peaceful as one may wish either. 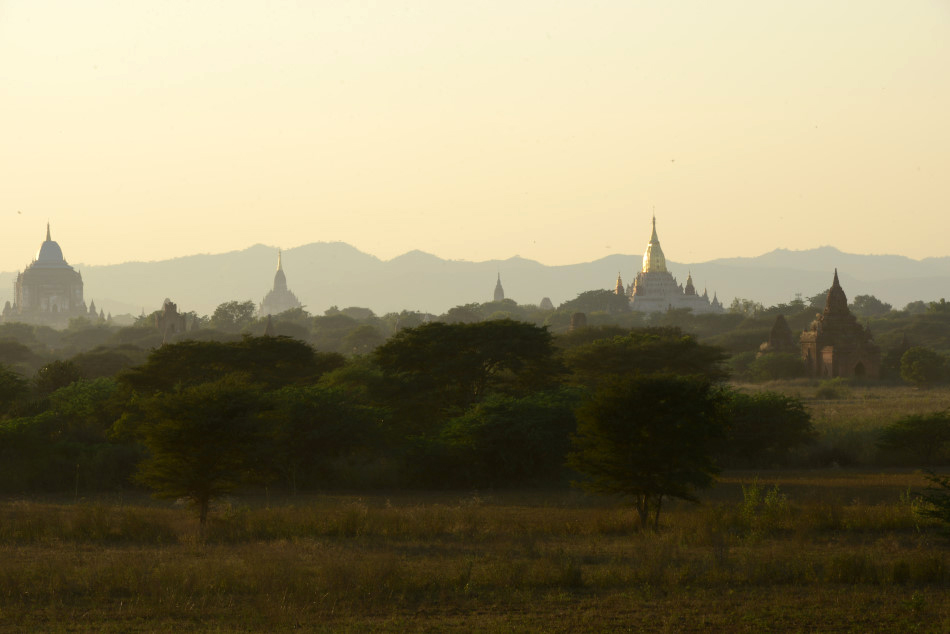 The view would be much better if we could climb onto one of the pagoda for the sunset.

Yet, it was still enjoyable to watch the colour of the ancient bricks changed from brown to orange as the sun dipped lower. 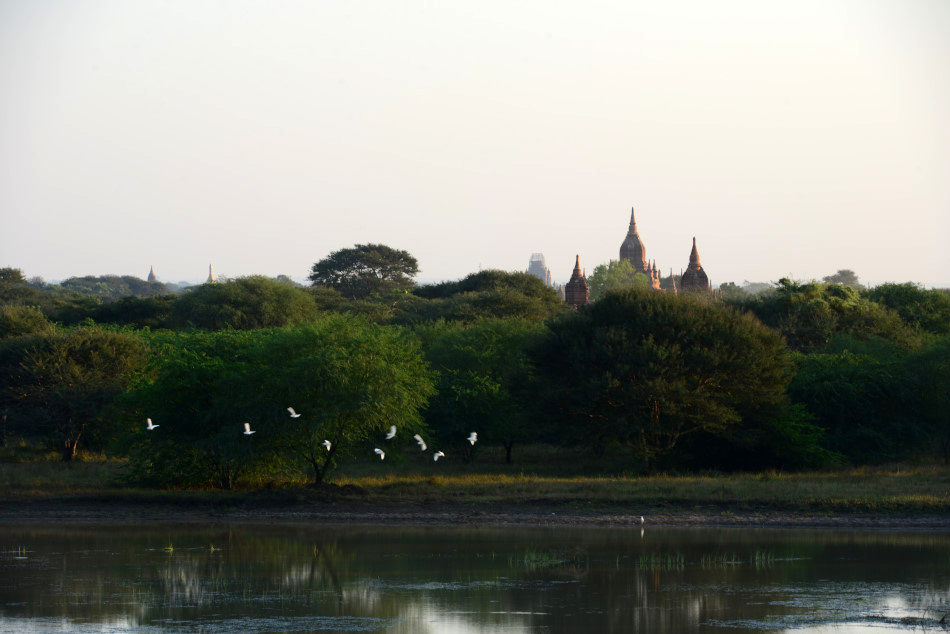 Behind the lookout there was a wetland, sort of a rare sight in the rather arid plains of Bagan.

Some tourists arrived in horse-carts. 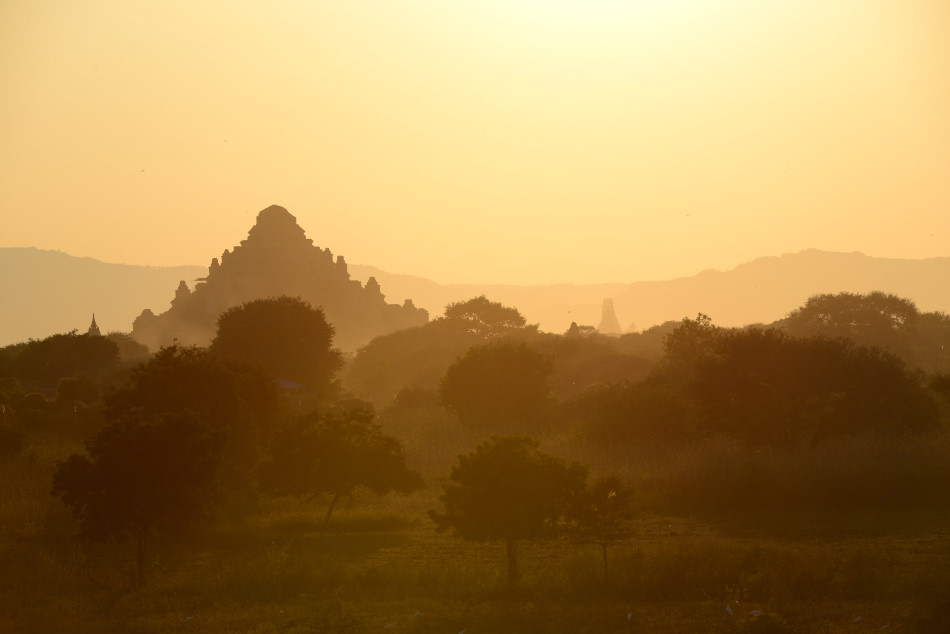 As sunset approached, the distant pagodas and temples turned into layers of silhouettes.

The horse-carts and ancient pagodas made a perfect picture.

An Ox-cart emerged from nowhere and stole everyone’s attention. 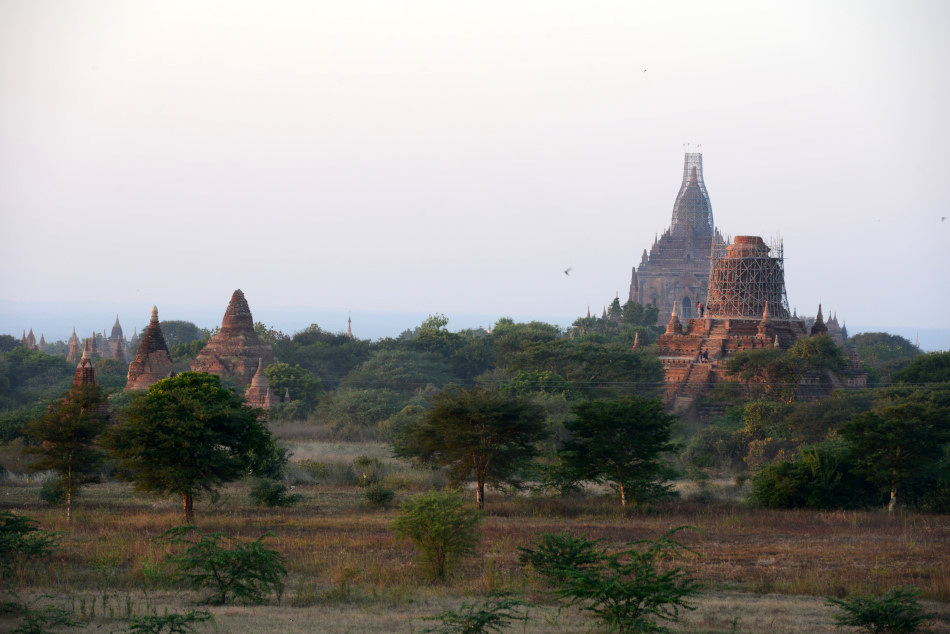 The scenery of pagodas reminded us the spiritual ambience of Bagan during the Bagan period. 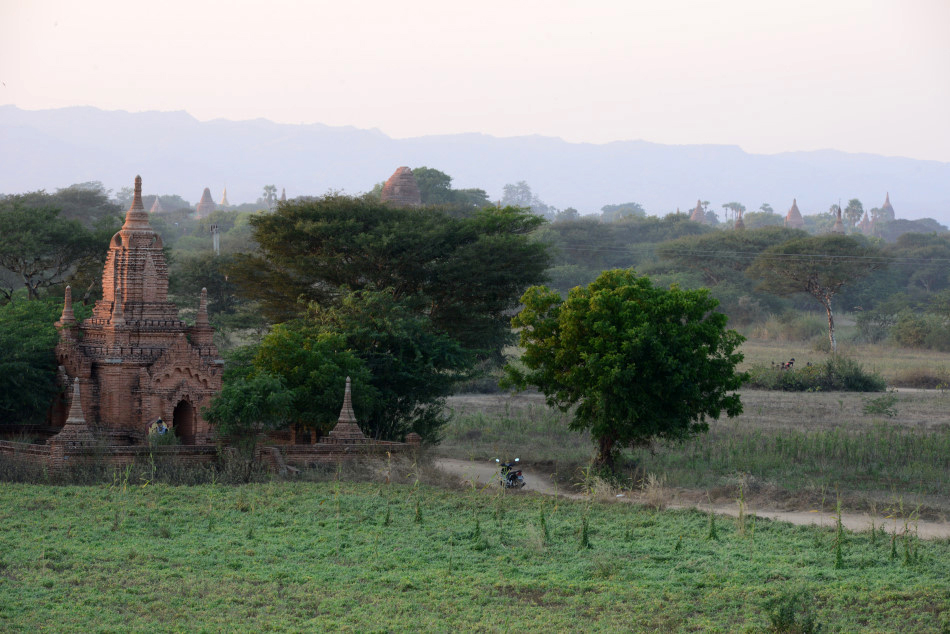 Pagodas in partial ruins standing against a rural setting provoked a romantic feel. 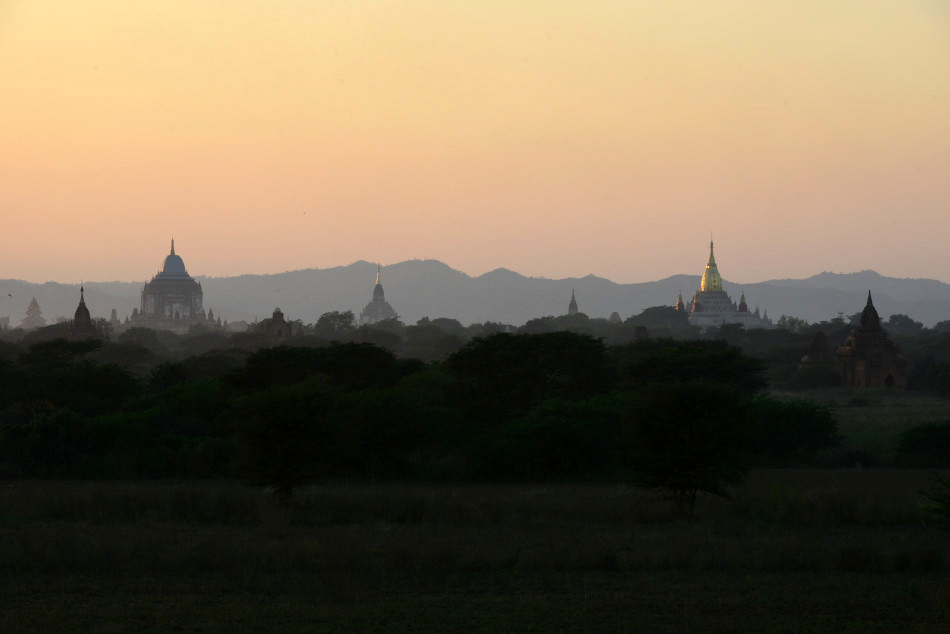 Gradually the foreground turned dark just before the sunset. 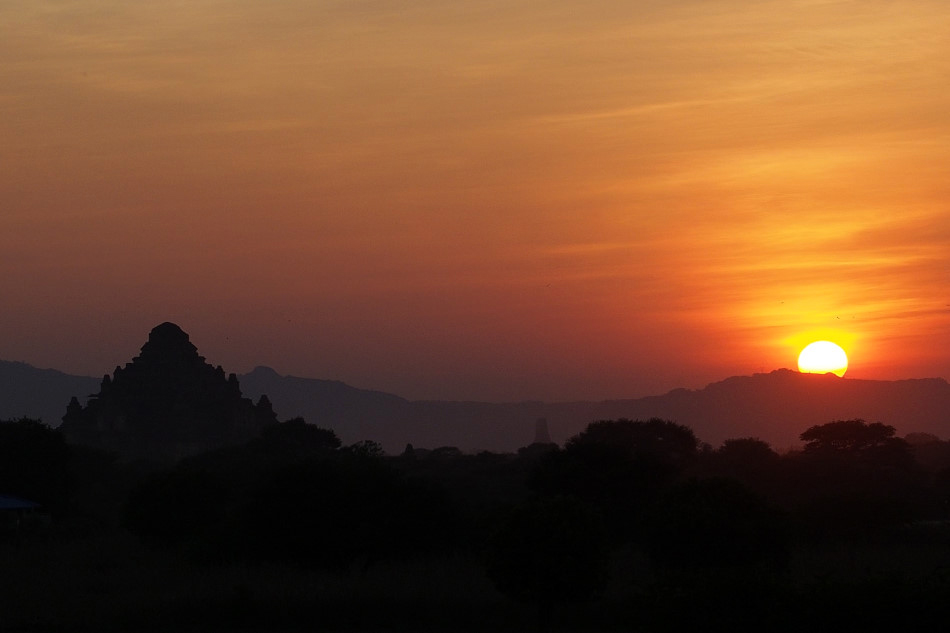 Beyond the pagodas and mountains, the sun dipped rather quickly in front of the crimson sky. 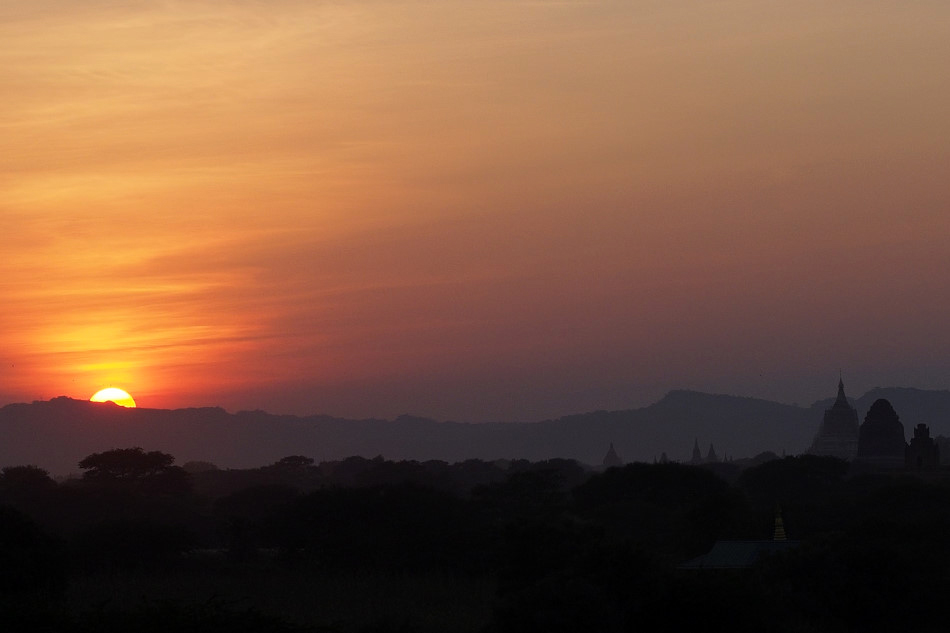 The sun set rather quickly and just a moment later, it completely disappeared behind the distant mountains.